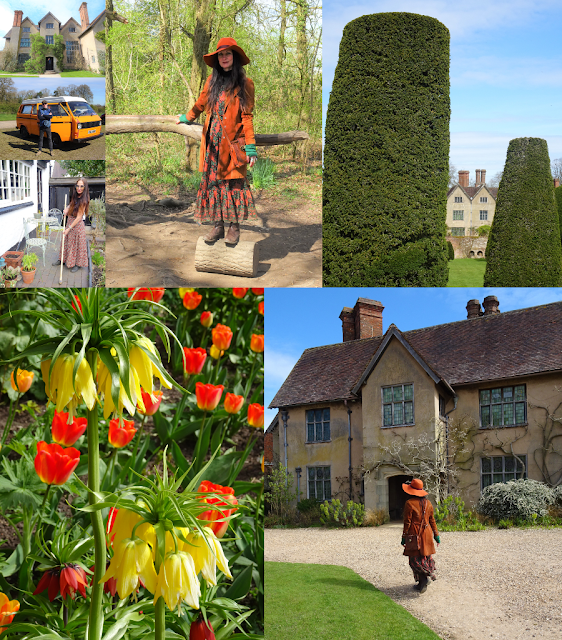 On Wednesday, after my Wii Fit workout and our breakfast, I watered the seedlings whilst Jon made sandwiches and we took Gilbert on his longest journey in over a year, a forty-minute drive up the road to Warwickshire. 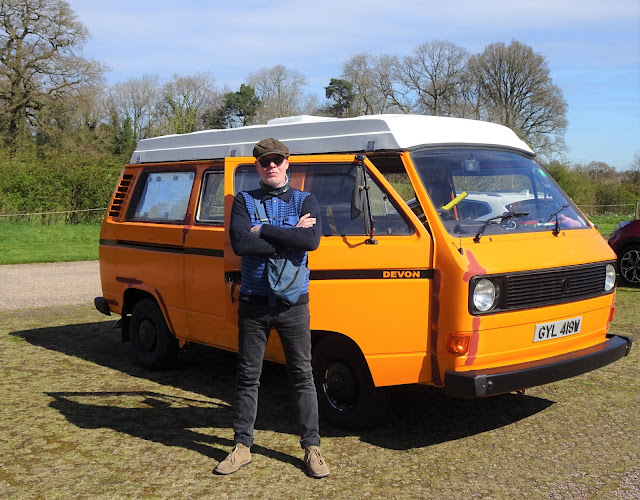 Our destination was Packwood House, one of our favourite National Trust properties. When I was researching Jon's family tree I discovered that his 9 x great-grandmother, Alicia Fetherston (1592 - 1645) was born at Packwood. Initially, I assumed she was born on the estate but after some research, it turned out that the Fetherstons were Packwood's original owners. 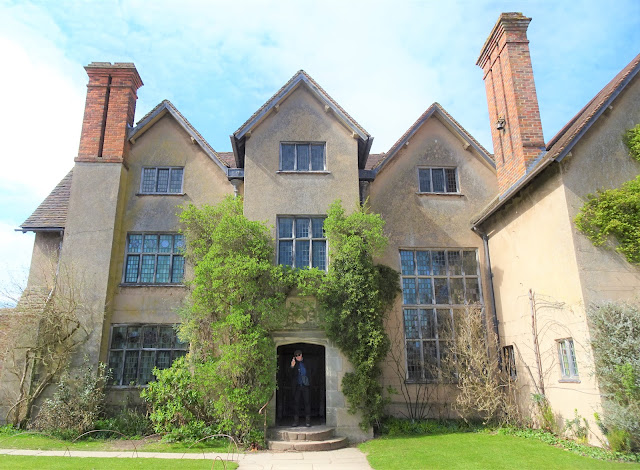 In about 1570, William Fetherston built a "great mancient howse" which was handed over to his son, John, in 1599. The house he inherited was tall, detached and nearly square in plan, with triple gables and a great brick cow barn to the north with further farm buildings to the east. The Fetherstons were yeoman farmers and each subsequent generation expanded the estate through industry. John Fetherston II was a lawyer and built the stables and outhouses with their complex brickwork, cupolas and many sundials. At the time of his death in 1714, the Fetherstone family commanded an estate of almost 690 acres. 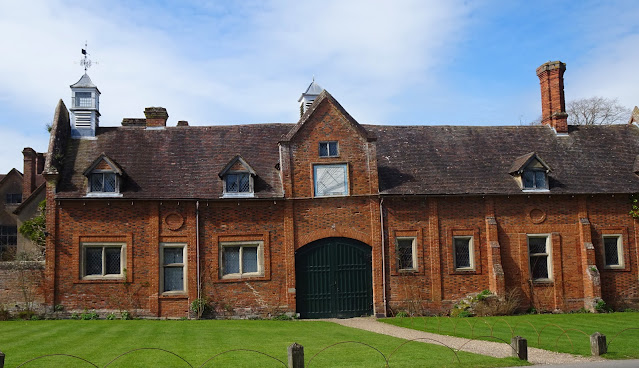 During the 18th Century, the house passed down the female line to the Leigh family and then the Dilkes. The last of the line died in comparative poverty until Packwood was sold to a solicitor who died in 1901. I wrote about Alfred Ash, the Birmingham businessman who then brought the property for his beloved son, after our first visit to Packwood HERE. 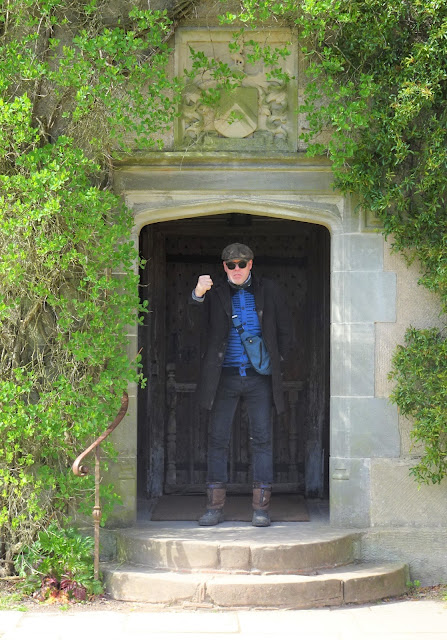 Now we've discovered a family connection we love Packwood all the more although Jon's not so happy about having to share it with the general public.....Get orf my land!

The day couldn't have been more perfect, gloriously sunny with the most incredible blue skies and, despite the early morning frost, we could feel the warmth of the sun on our backs. 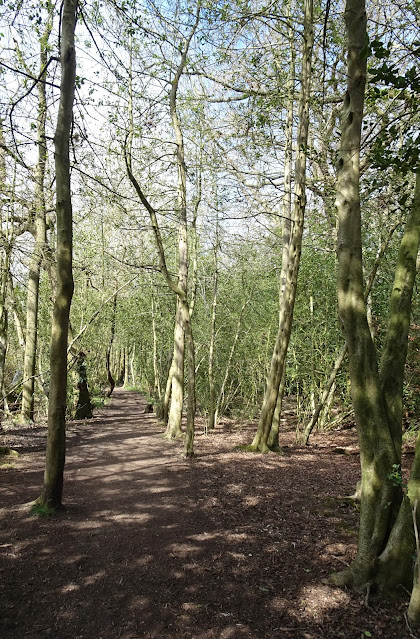 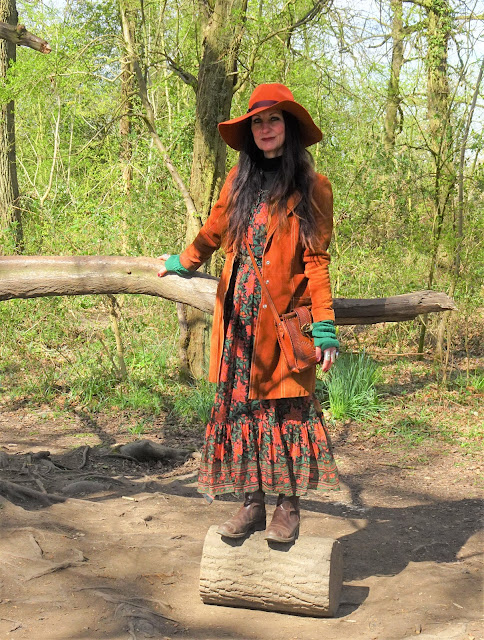 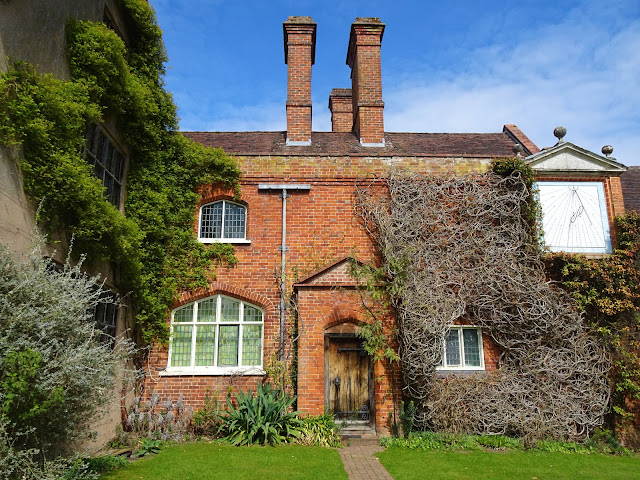 I adored this cheerful Spring border... 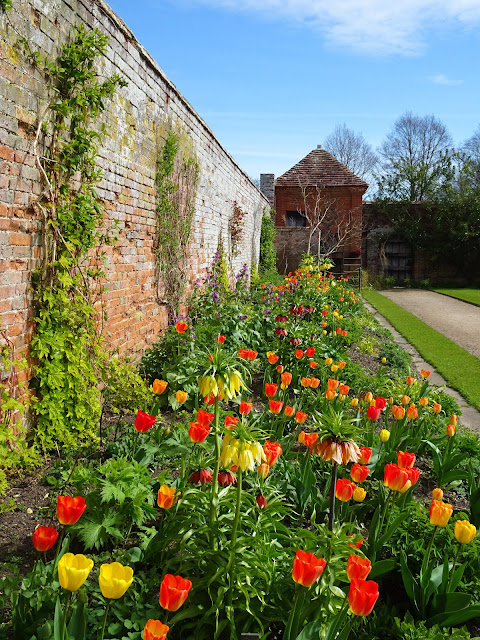 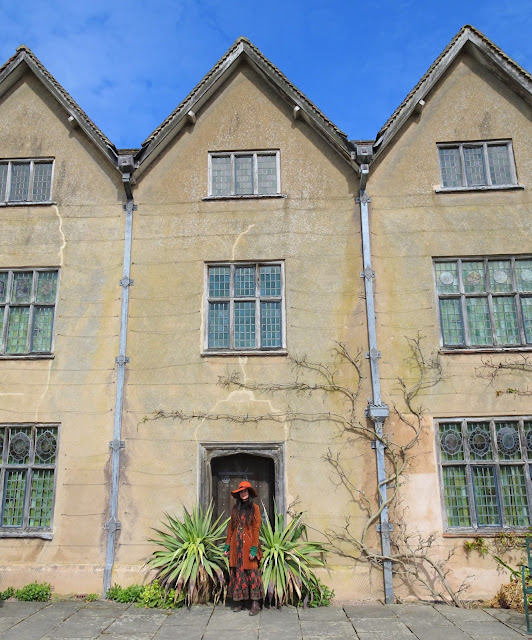 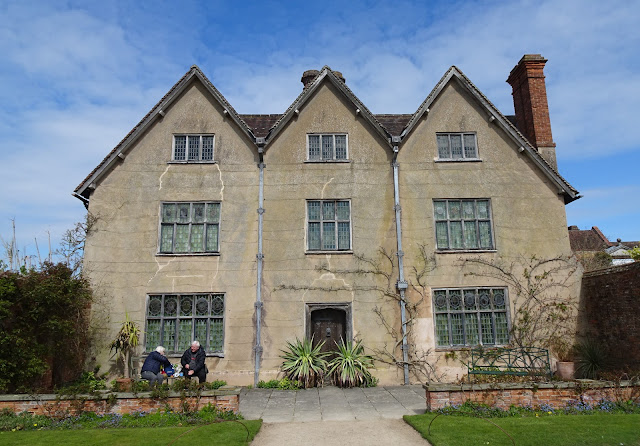 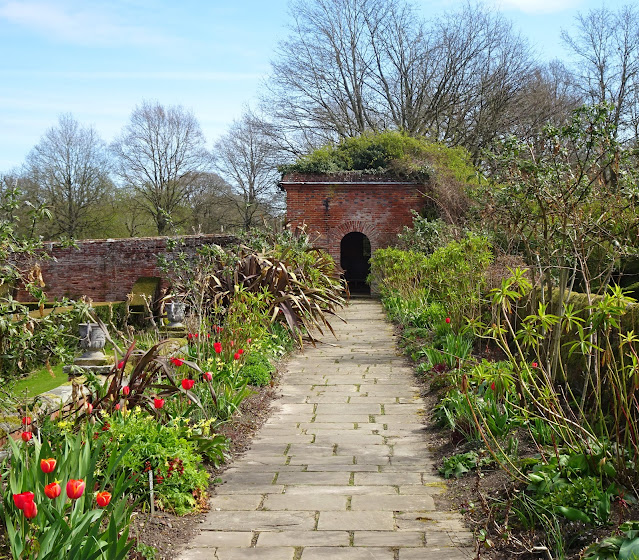 To our delight, the ancient Yew Garden was finally open to the public, the first time we've ever been able to wander around it. Incredibly, some of the oldest trees are over 350 years old and were planted in the reign of James I by Jon's ancestors, the Fetherstons. That's what I call a family tree! 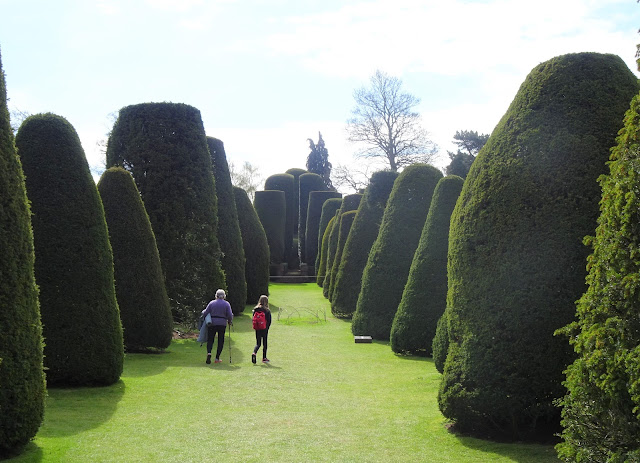 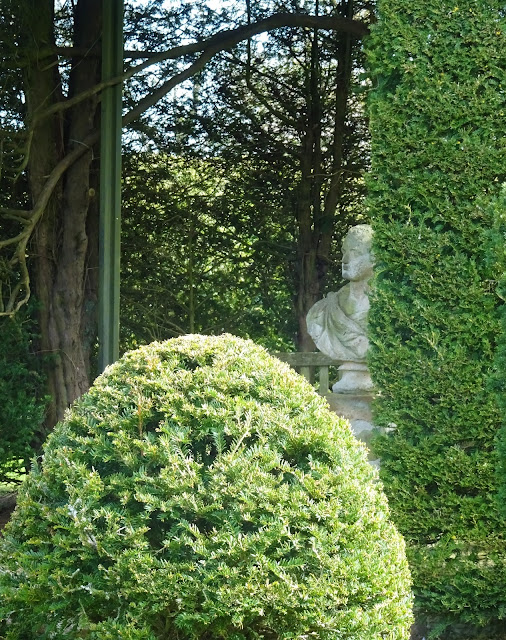 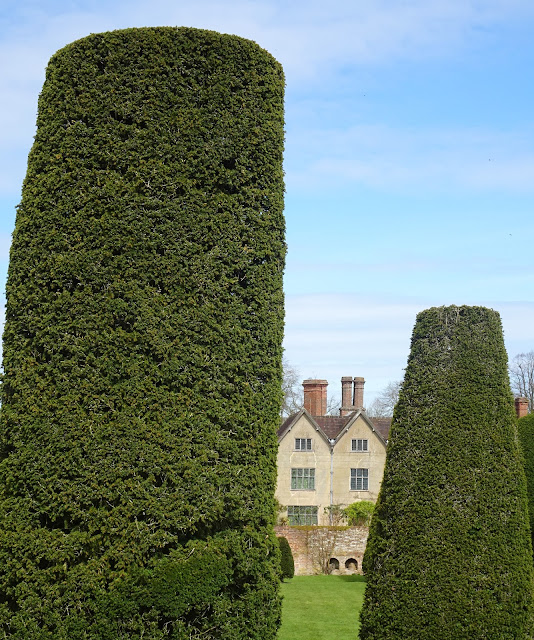 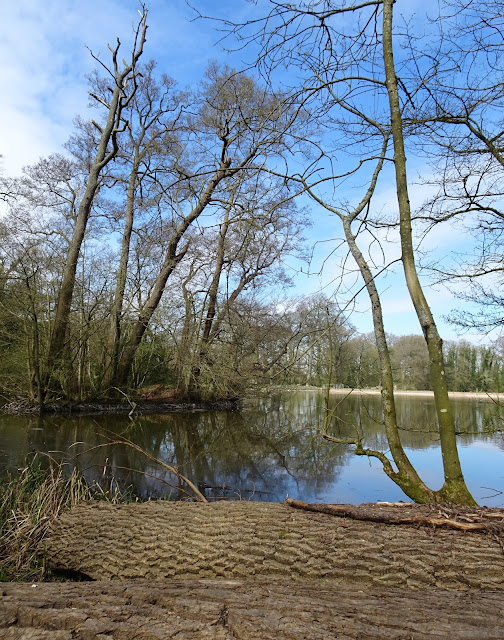 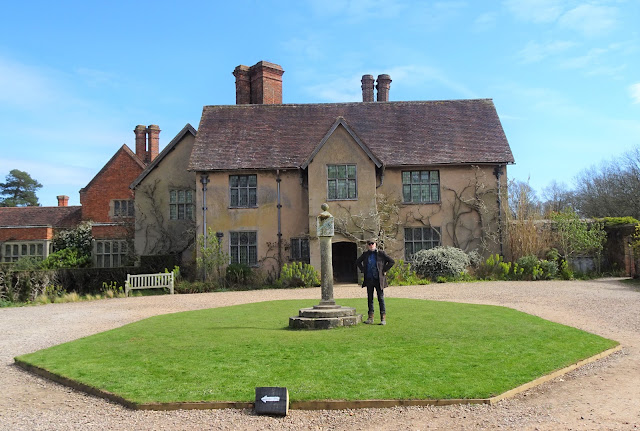 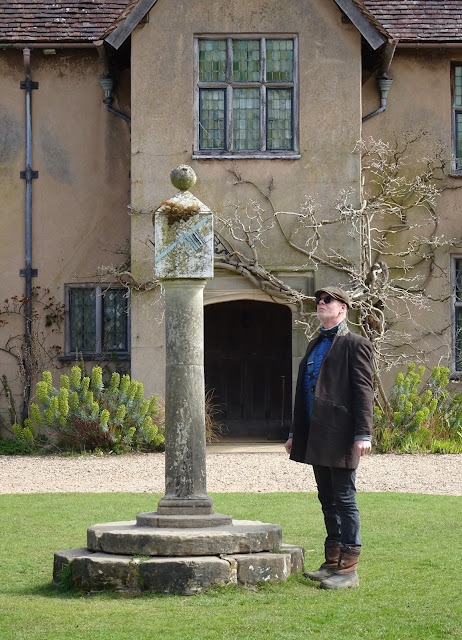 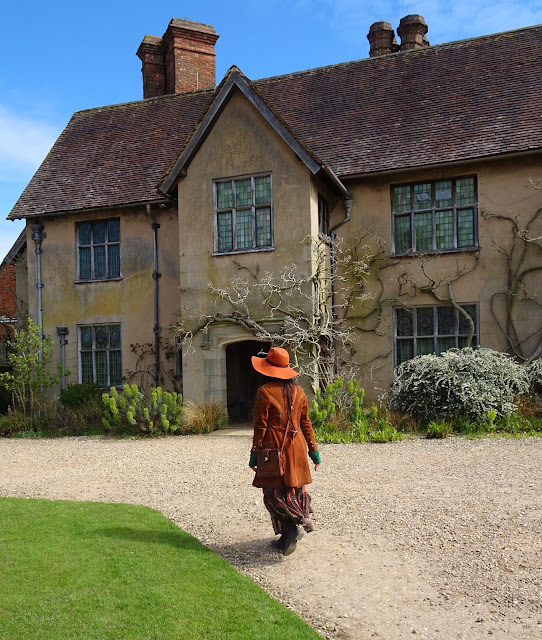 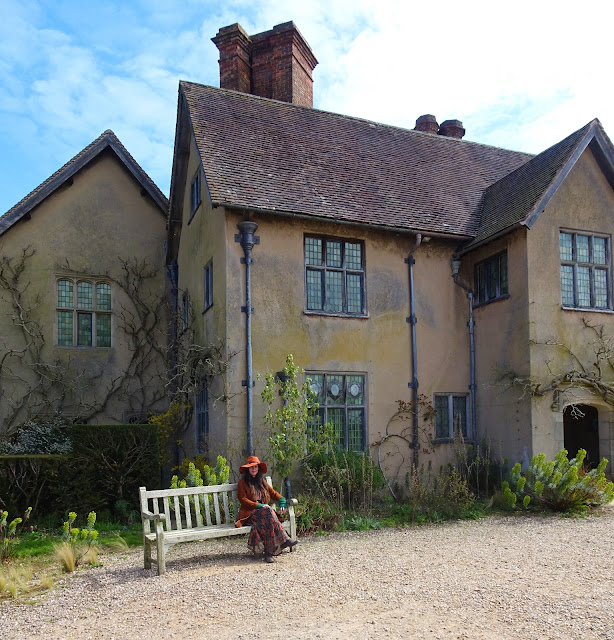 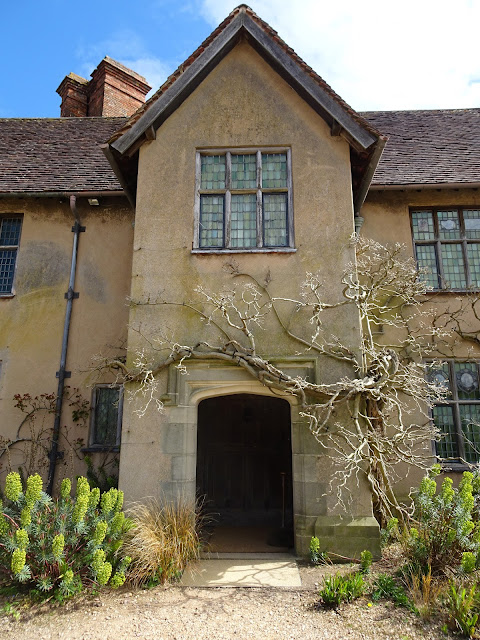 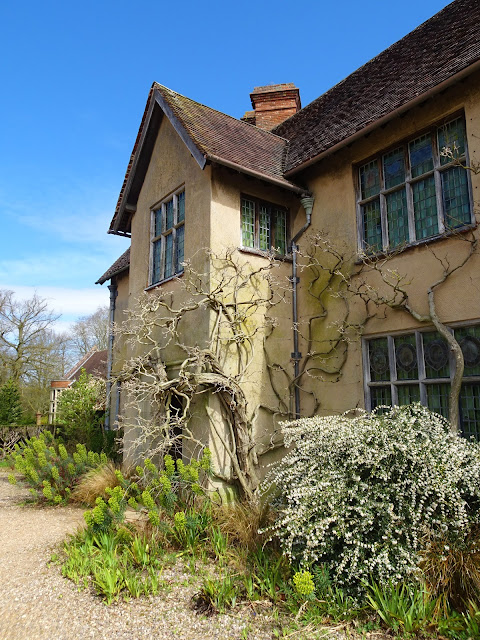 We also visited Packwood in December 2020 (HERE) and June 2020 (HERE). I told you we loved it, it's the National Trust property we've visited the most. If only Jon and I had been born in the 16th Century, it could have been ours!

It was lovely opening Gilbert's doors, boiling the kettle to make tea and eating our sandwiches at the table whilst listening to the birds singing. I was so overwhelmed I slept all the way home!

Back at Stonecroft we got changed and spent the remainder of the day in the garden. Tea was a weird (but tasty) mix of poached eggs, sweet potato fries and gherkins accompanied by a bottle of beer. Later we watched Waking The Dead and collapsed into bed before 10pm. 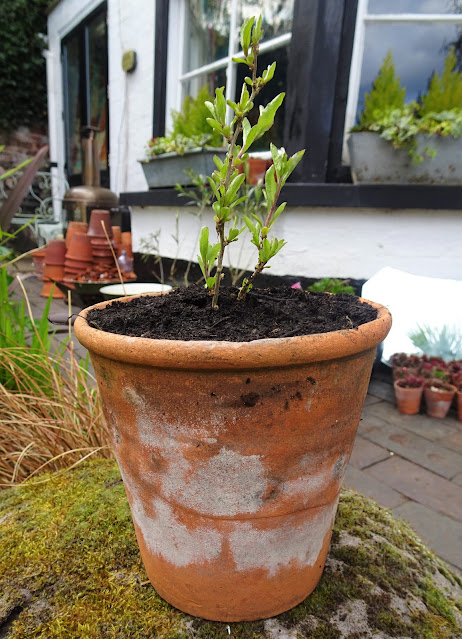 Wednesday was another gorgeously sunny, but chilly, day. I threw a load of washing in the machine, pegged it out on the line and did my Wii Fit workout before breakfast. Liz popped round bearing a plant her brother had grown from a Goji berry seed (above). We chatted, drank tea and explored the garden, which she hadn't seen since Jon had cleared the top part. Al had his AZ jab yesterday so we've all had our first dose now. She left with some of the laurel we'd dug up yesterday, along with a root of forsythia for her mum. 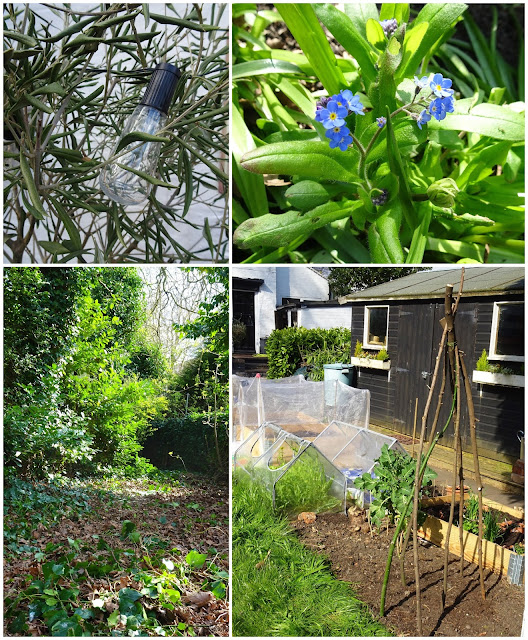 We'd run out of bananas & were almost out of toothpaste so Jon & I walked down to Johal's, taking the grab stick and a bin bag with us. By the time we'd reached the shop, five minutes down the road, I'd filled the sack with the usual Mcskanky takeaway wrappers and, inexplicably, loads of Waitrose paper coffee cups - the nearest branch is 11 miles away! Back at home, we changed into our gardening gear and got stuck into the gardening, taking a noodle break midway through.

Jobs included building a wigwam for the Greek beans using sticks foraged from the top of the garden, fitting a solar-powered pond pump, putting up the birdhouse Liz & Al had bought us for Xmas, emptying out the chimney pots in readiness for planting with nasturtiums, splitting up the chives and moving a couple of clumps to the herb bed, planting some marjoram & fennel we'd dug up from elsewhere in the garden, clearing the borders of fallen leaves, cutting back ivy, chopping down a holly bush, pruning a hawthorn (an evil spiky bastard) and taking down the shelter in readiness for a gloriously sunny summer (I'm the eternal optimist!)

I'm in no rush to get back to the shops (or the beer garden), I'm happy at home. Look at what the postman delivered today, a wood and brass weed brush with an extra-long handle to prevent back injuries! It's absolutely brilliant and definitely beats getting down on my hands and knees and tackling the gaps between the bricks with a butter knife. I'm not sponsored (I wish!) but you can get one HERE and P&P within the UK is free. Talking of gardening bargains, the light bulb in my olive tree is part of a string of solar-powered garden lights Jon found in Morrison's last week for £5. I am looking forward to my hairdressing appointment next week, I can tuck my hair in my waistband now and it takes an age to dry! 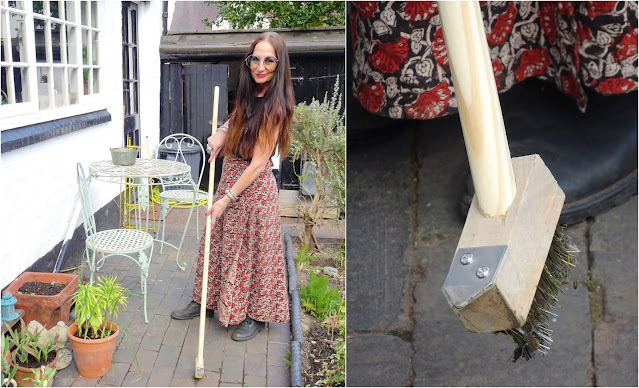 It was halloumi with roasted veg for tea accompanied by a glass of wine. 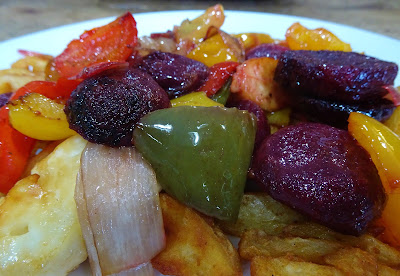 Later we'll be on the rum and watching the new series of The Great British Sewing Bee. I just hope that I manage to stay awake!
Stay safe, happy & healthy and see you soon!
Posted by Vix at Wednesday, April 14, 2021

Email ThisBlogThis!Share to TwitterShare to FacebookShare to Pinterest
Labels: Family, Gardening, It's All About Me, Jon, Litter-picking, National Trust, Our House, Out and About