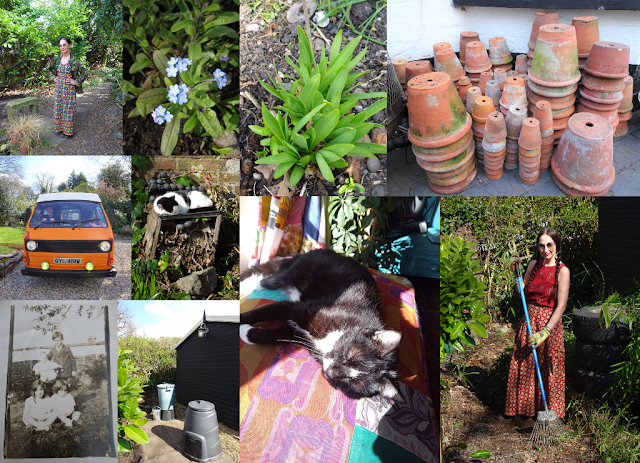 The lids were frosted over when I wheeled them bins out on Thursday morning and the lads were soon back in the house and snuggled up next to Jon, anxious to escape the chill. I did my Wii Fit workout, topped up the bird feeders and, after breakfast, we layered up and ventured into the garden. 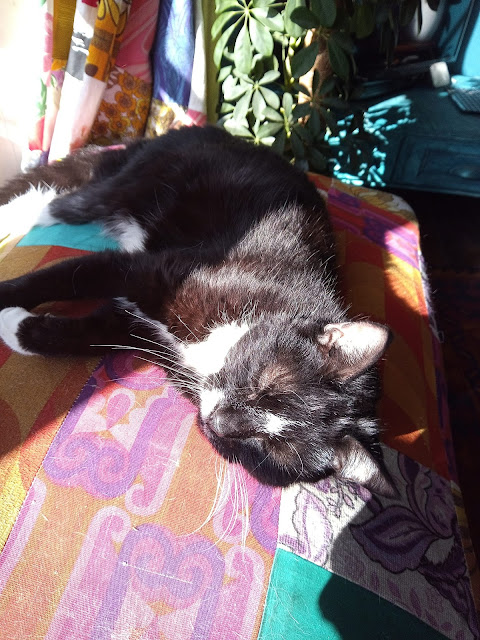 Stephen had other ideas. 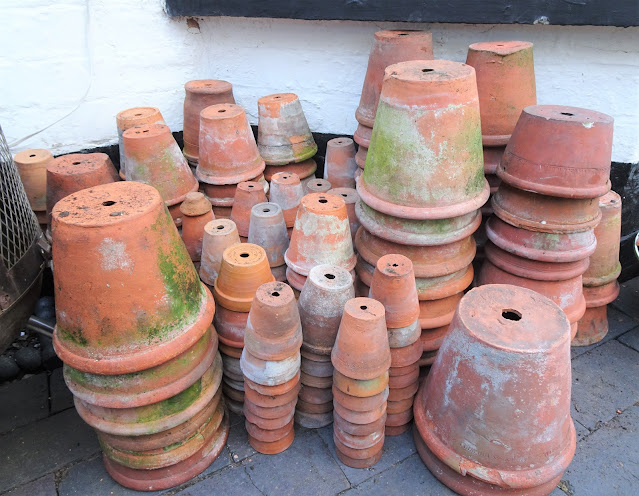 Jon's plan was to fit some vintage spotlights to Gilbert, a job he'd been putting off for ages as it involved removing the front grille and the dashboard. Anticipating lots of swearing, I grabbed a brush and sat on the patio moving the terracotta pots, cleaning them and stacking them according to size. The sun was deliciously warm and within minutes I'd stripped down to my bare arms. I moved a couple of plants in the borders and planted a few more sempervivums into tiny pots. 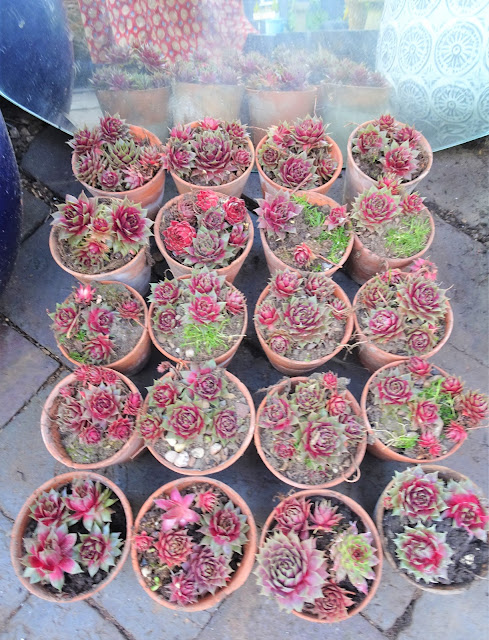 In normal times we were always busy shopping for stock, doing vintage fairs most weekends and preparing for the festival season and never had much time to think about the mundane day-to-day tasks. During lockdown, we've had time to reconsider our routines. One of the things that irked me is having to walk across the lawn to get to the compost bins when I empty the kitchen waste caddy, unless it's the height of summer I invariably end up with soggy slippers. A wander around the garden led to a flash of inspiration. Between the laurel bush & the Kinky Shed there's a neglected section where Jon piles up old wood, cardboard & broken car parts (awaiting trips to the tip) along with the endless sacks of bamboo roots we're slowly cramming into the garden waste bin for fortnightly collection. Amongst the rubbish, there are huge clumps of bamboo and brambles. I decided that f I cleared the area I could move the compost bin and access it from the path. As Jon was distracted by Gilbert I got stuck in straight away. 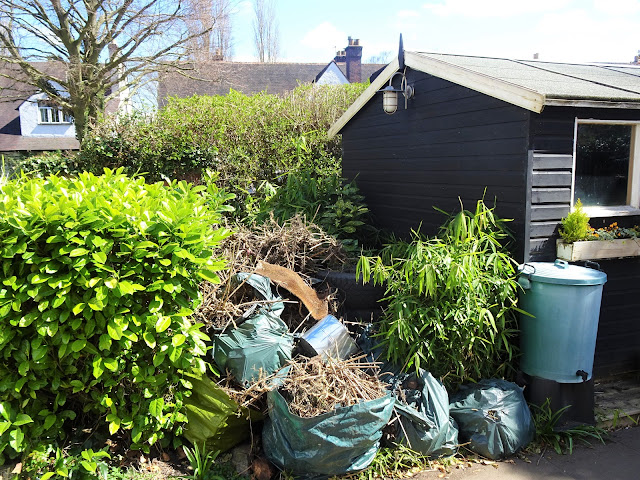 After a break for noodles, we both continued with our respective tasks. By 4pm Gilbert had working spotlights and the dashboard and grill were back in place. 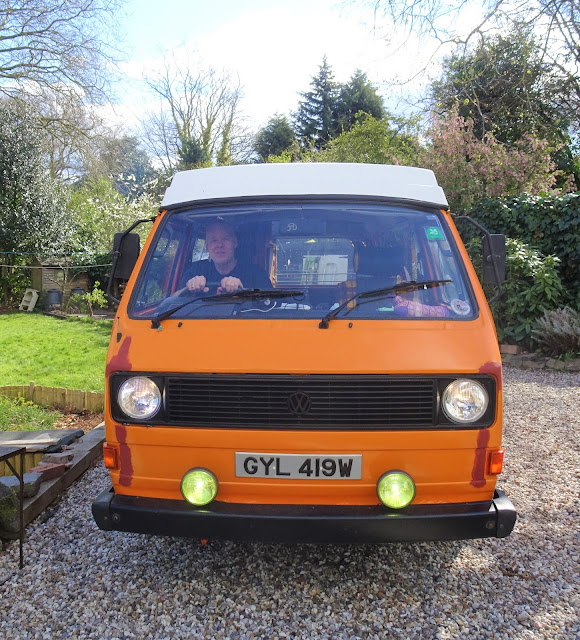 Meanwhile, I shifted all but a set of spare tyres (which is on Jon's Friday to-do list), moved the bagged garden waste further down the path, cut back the laurel, pulled up the brambles and hacked down half the bamboo. 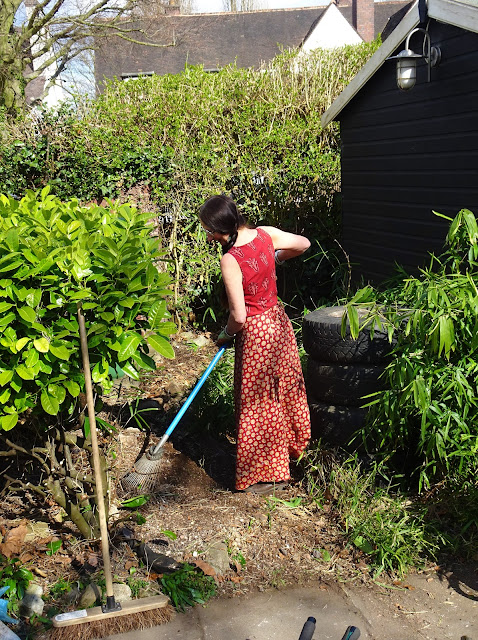 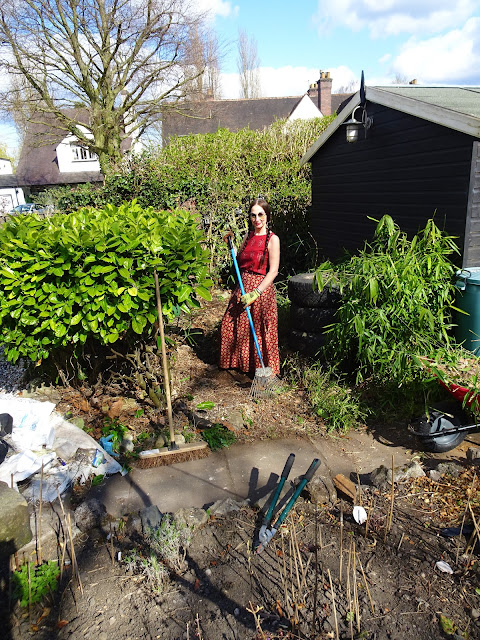 Tea was veggie non-meatballs with spaghetti and Jon's homemade tomato sauce. Later we watched more of Waking the Dead. 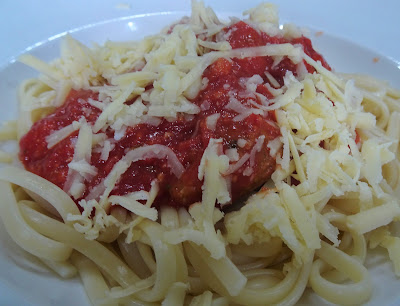 Friday got off to another bitterly cold, frosty start. I booked next week's National Trust visit and wrapped my eBay sales before my last Wii Fit workout of the week. After breakfast, Jon did the post office and supermarket run. I did a load of washing, pegged it out on the line and continued with my garden clearing. 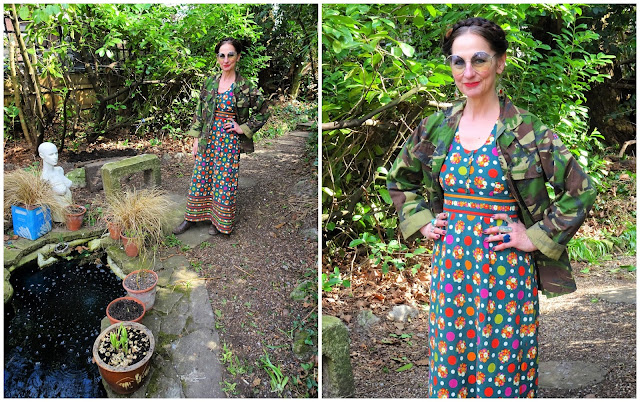 No bare arms today, I kept my camo jacket on all day. Underneath I'm wearing a vintage 1960s Van Allen printed cotton maxi dress bought from eBay 20 years ago (I've also got it in blue). 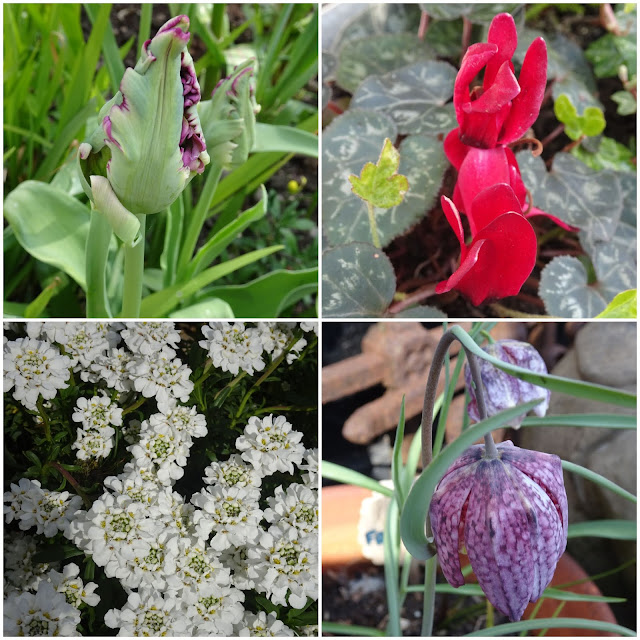 Once Jon was back he wheeled the tyres further up the garden and did the heavier clearing. 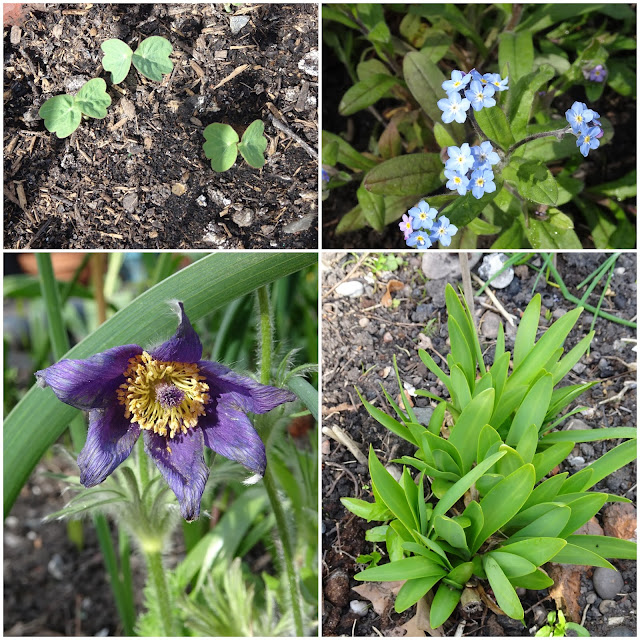 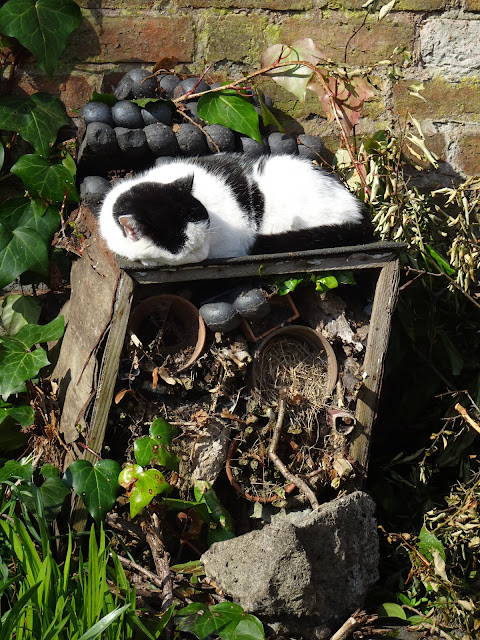 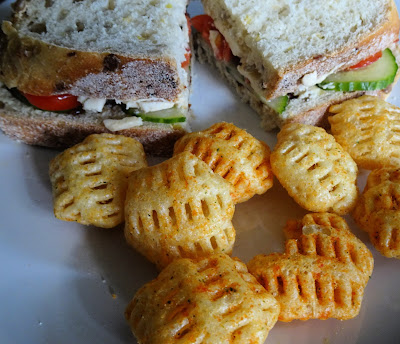 After a break for a Roquefort & salad sandwich I pulled the bamboo up from the cracks between the pavers and Jon trimmed the bamboo down to ground level before completing another Gilbert-related task, attaching the stickers he'd bought from eBay.

I moved the compost bin and the water butt into the cleared area and did a happy dance. No more soggy slippers! 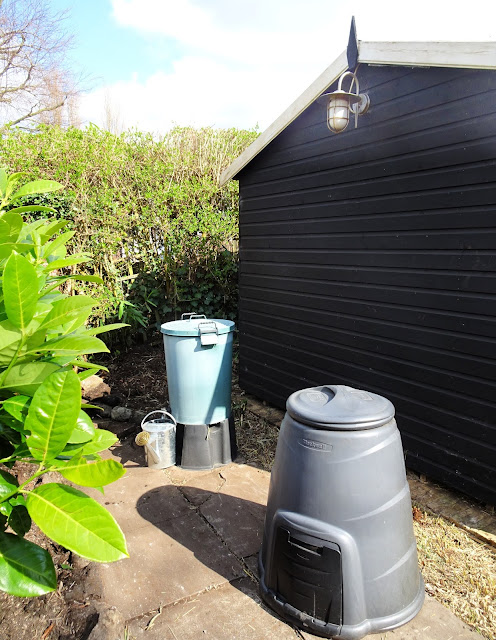 After I'd cleared up I had another look at the family tree. The main reason for starting it was to find out more about my Dad's parents, who I never knew. I find it amazing to think that they were Victorians! My grandfather, John Brearley (1889- 1966) died three days after I was born and was, like generations of his family before him, a Staffordshire coal miner. I've traced his side of the tree back to my 7 x great-grandfather, Thomas Brearley (b. 20th December 1560), from Oldham in Lancashire (I've always assumed my surname hailed from the North, I was right!) The family were living in Rochdale until the mid-1700s and had moved to Staffordshire by the end of the century. Dad's mother, Ethel (1894 - 1962) was also from a Staffordshire coal-mining family. According to the 1901 census she and her two siblings (Albert, 8 and Edith, 5) were living in Great Wyrley in Staffordshire with her father, Josiah Dawkins (1869 - 1911) and her parental grandparents. Josiah was listed as a widower and I've tried and failed to find any record of his wife (my great-grandmother).

Attached to his details on Ancestry.com was this entry taken from the UK Coal Mining & Deaths Index, in December 1911. Josiah was 43 years old.

Deceased, when turning over a piece of rock, pinched the little finger of his right hand between the rock and the side of a tub he was filling. He continued his shift, and worked two more shifts, but his finger became worse, and on the 15th December he was sent to the hospital where he died the same day from blood-poisoning. 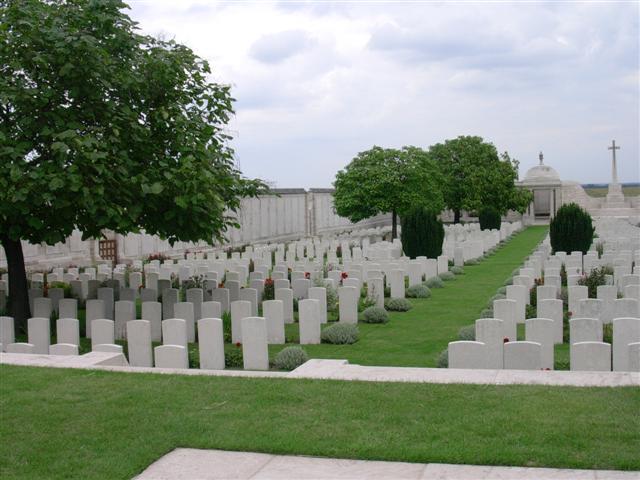 Albert Ernest Dawkins, Ethel's older brother, served as a private in the South Staffordshire Regiment and was killed in action on 25th September 1915 at the age of 22. He is commemorated at Loos Memorial at the Dud Corner Cemetery, Loos-en-Gohelle, Departement du Pas-de-Calais in France, one of over 20,000 officers and men who have no known grave, who fell in the area from the River Lys to the old southern boundary of the First Army, east and west of Grenay. Coal mining was a scheduled occupation during WWI and workers were exempt from enlisting. Ethel's brother is listed in the 1911 census as being a coal miner horse driver so he must have volunteered to fight for his country, no doubt influenced by his father's untimely death.

I'd never heard of my great-uncle, the young man who fell in the Great War. My Dad was christened Norman Ernest but called Ernie since childhood, I wonder if my great uncle was also known as Ernie and that Dad was named after him? 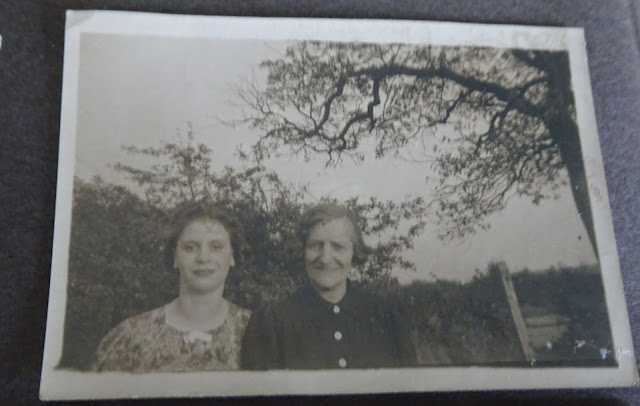 I'd never seen a photo of my grandmother but after Dad died I found this photo amongst his many albums and can only assume it was her. What a sad start to her life, growing up without a mother, losing her Dad in an industrial accident at 17 and her brother to The Great War at 21. I hope marriage to John in 1919 and her four children brought her some happiness. 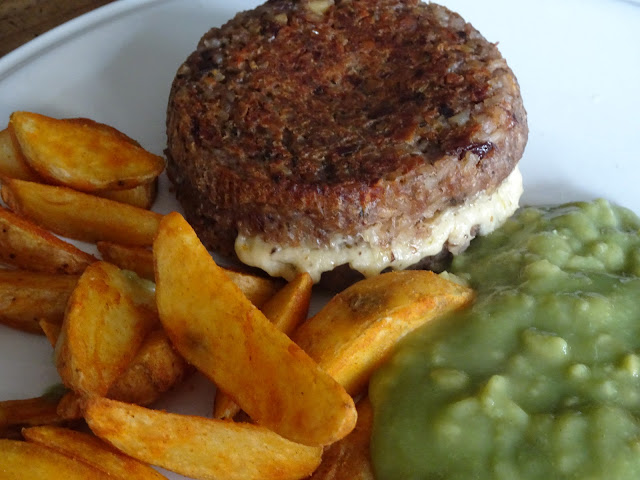 Tea was a nut roast with mushy peas and jacket wedges accompanied by a glass of wine. We'll be cracking open the rum in a bit and watching Gardeners' World.