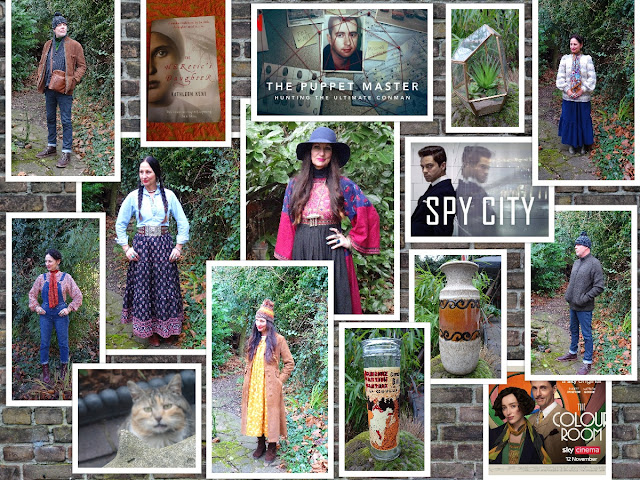 Last Wednesday we watched the wonderful, The Colour Room, a British film about Staffordshire potter Clarice Cliff and the creation of her Art Deco era Bizarre range. I was inspired by Clarice's trademark long scarves and the plaited hair of the factory girls when I got dressed the following day. 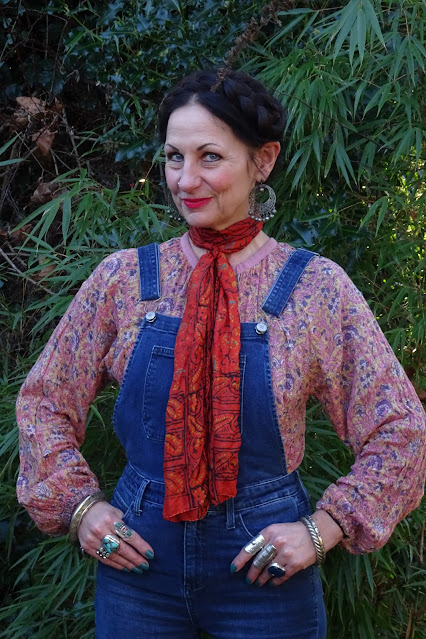 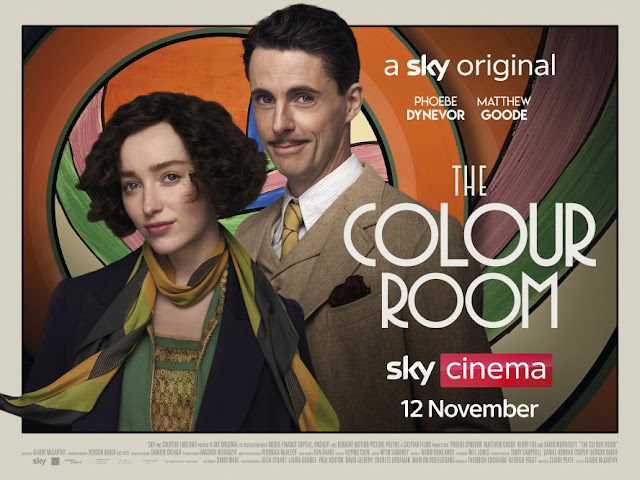 The day was occupied with ironing, photographing and listing our recently acquired stock on eBay and the evening was spent with The Apprentice once we'd caught up on The Antiques Road Trip.

When we got back from Cirencester on Friday evening I finished crocheting a hat for Lord Jon, which I'd started before we left the house, ready for him to wear on our weekly Walsall walk the following day.
Our walk took us around the block, a route we'd not done for a while, where we spotted yet more beautiful Victorian mansions being modernised (ie., ruined with inappropriate windows and doors and vast breeze block extensions).
Our visitor came for lunch, demolishing three sachets of cat food and a bowl of biscuits. I sat on the doorstep throwing treats at him in an attempt to gain his trust. He came within grabbing distance but I restrained myself, not wanting to spook him. By the way, it's definitely a HE, we caught him spraying up the cast iron radiators, propped up further down the garden. 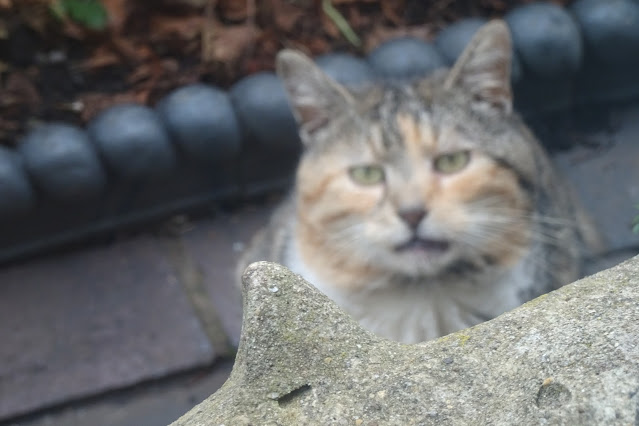 Some friends popped round in the afternoon and, after they'd gone, I tried out the foot mask that my lovely friend Allie had sent in the box of treats that turned up the other day, followed by an indulgent soak in the bath. My feet have never felt so soft! 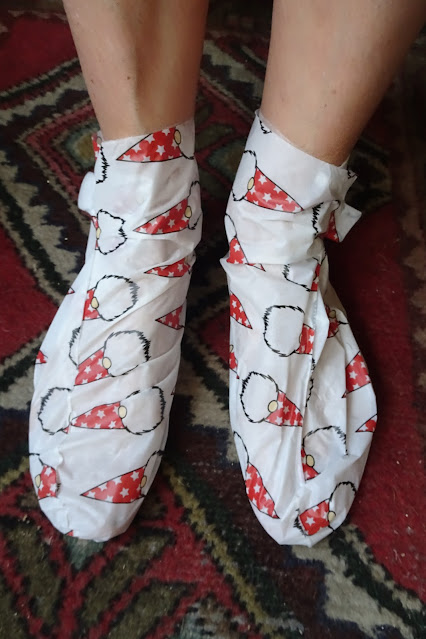 The evening was spent with rum, cola and the rest of Spy City. Written by one of my all-time favourite authors, William Boyd, it's an extremely stylish Cold War thriller with a great plot but the lead, Dominic Cooper, didn't really impress until the final episode when he acted his socks off. 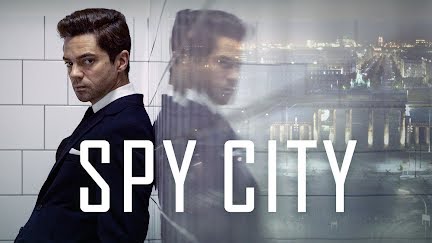 The laundry basket was overflowing so when I got up on Sunday morning I threw a load in the machine along with the Ecoegg that Lynn had kindly sent me - an ovoid rubber ball you fill with the wax pellets provided and put in the drum of the washing machine, it claims to last for up to 70 washes (at 60°C or less) and can also be used for hand-washing. I use the coolest wash setting for most of my laundry (15°C) and it worked perfectly. I normally use soda crystals as I loathe the artificial smell of washing powder, the Fresh Linen scent was just right, the washing smelled like it had dried outside on the line - which it hadn't, I'd hung it up in the utility room. I noticed that Wilko sell the refills last time I popped in. 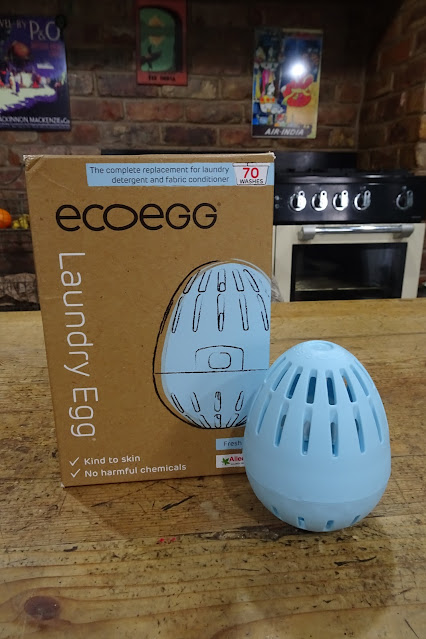 After mugs of coffee and toast, we headed off to the clearance charity shop for our weekly visit. Needless to say, we went bearing donations, two old hats of Jon's (to make room for the one I'd crocheted and the one he'd bought in Cirencester), the CS Samson Shardlake mystery I'd finished during the week and a pepper mill that we no longer used. 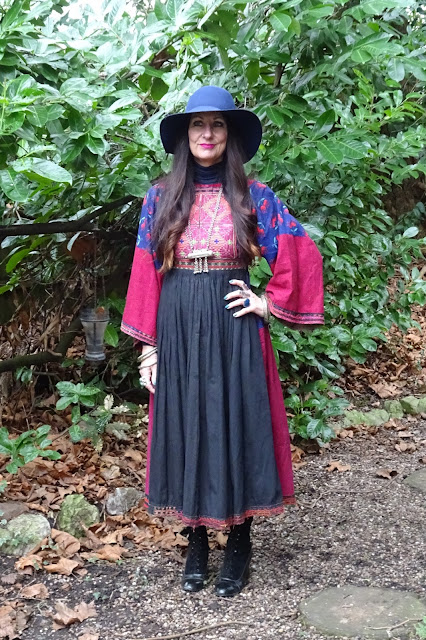 Nothing new to see here! I wore one of my vintage Afghan dresses (bought from a vintage fair in 2018), the 1960s-does-Edwardian boots (from a car boot sale in 2010) and a 1970s felted wool hat I bought from a charity shop in Cirencester four years ago. Actually, I'm lying - the navy blue Heatgen polo neck is a recent purchase, Jon ordered some new pants & socks from M&S and I added it to the order to qualify for free postage. 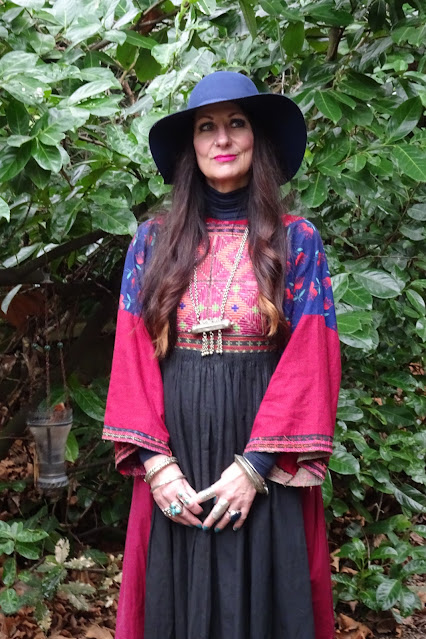 The charity shop did us proud! Three posh gents' jackets - one by Hugo Boss (union made in the USA), another by Kenzo and the other by Dolce & Gabbana (both made in Italy) - all hand-finished and made from virgin wool and undoubtedly from the same source as they were all a 42R. There was also an Armani 100% cashmere jumper, a funky 1970s coat from Debenhams, a gorgeous hand-knitted pure wool jumper with puffed shoulders (which I'm keeping), another West German Fat Lava pottery floor vase by Scheurich and a cute terrarium - perfect for the bathroom. 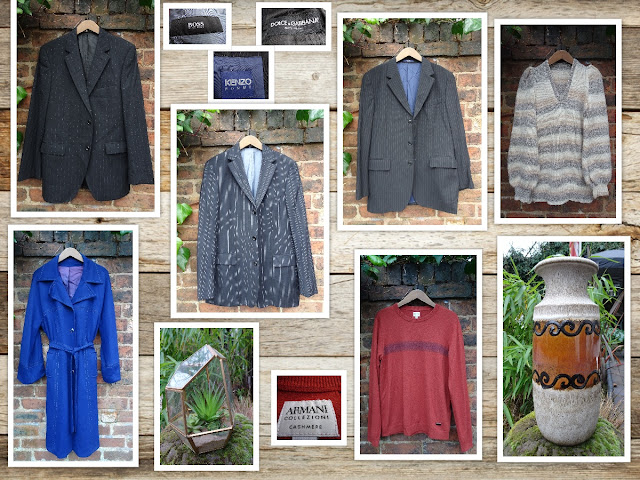 I spent the afternoon reading, finishing the Neil Broadfoot thriller I'd started earlier in the week whilst Jon tinkered around with cars. After tea, we watched the rest of the gripping BBC drama, Rules of the Game before The Great Pottery Throwdown. 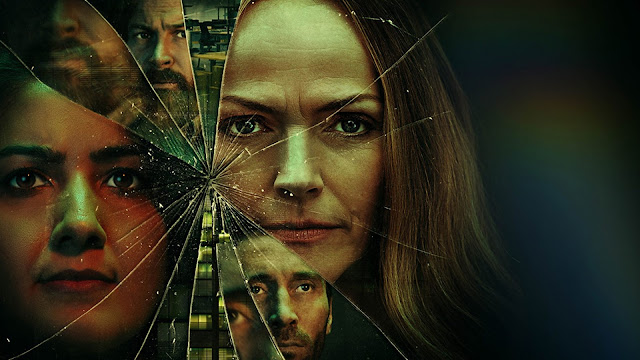 After a quick blog catch-up, I retired to bed with my latest read. 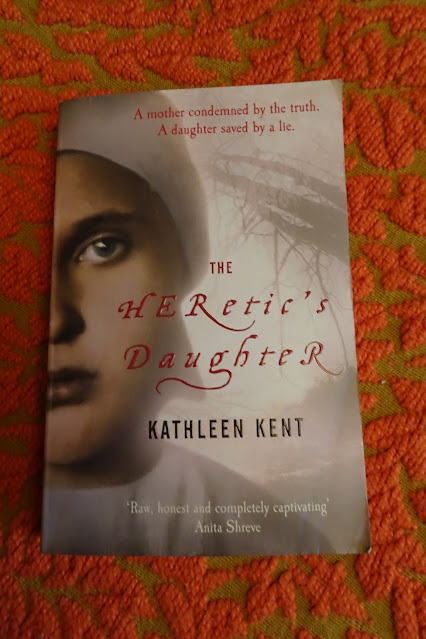 On Monday morning, after my Wii Fit workout, I wrapped the eBay parcels and washed the bedding that Jon had brought downstairs when he got up. Jon did the post office and supermarket run whilst I ironed and wrote descriptions for today's eBay listings. Lord Jon did the photography after lunch. 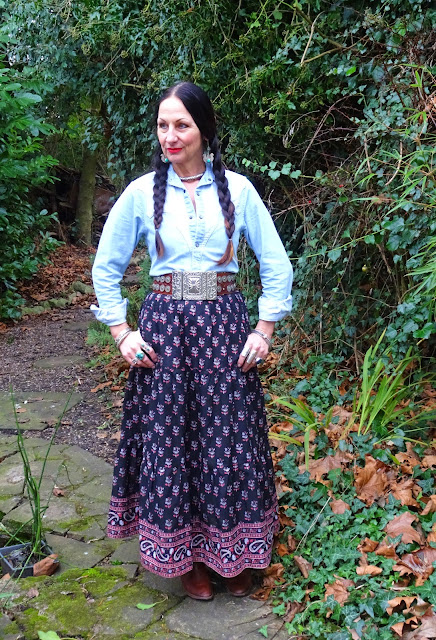 I'd been stalking this block-printed Dilli Grey skirt since it had appeared online and, after selling one I didn't like quite so much to raise the funds, I placed an order. I wore it last week with a vintage Phool jacket and on Monday teamed it with a vintage denim cowboy shirt (nicked from the Kinky Shed), a Spanish leather coin belt Cheryl had given me and my Toast cowboy boots. It's fully lined with pockets and a drawstring waist, perfect for tucking in my ever-increasing layers, the thermometer hasn't crept above 3°C for days. 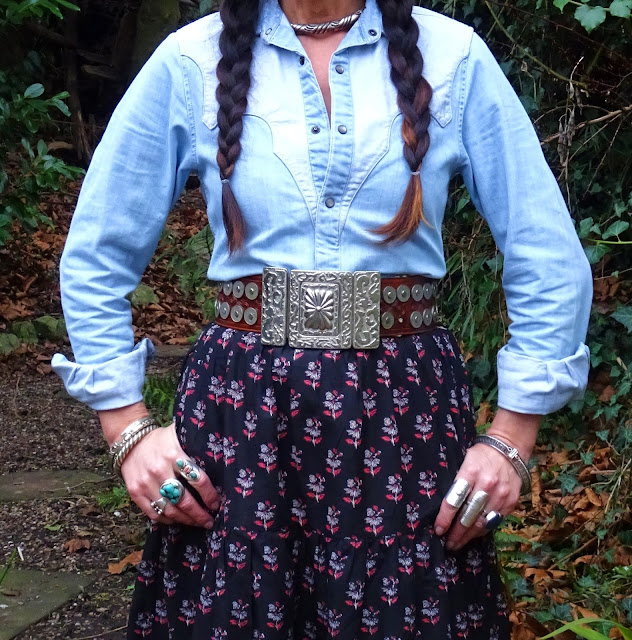 CAT paid us another visit and hung around for around an hour. Luckily Stephen was snoring his head off on the settee and didn't notice. 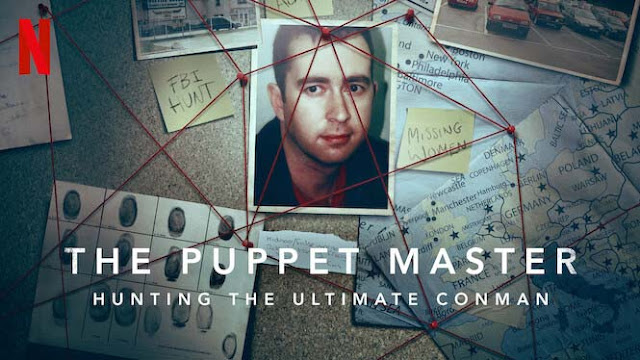 We spent the evening watching the three-part documentary series, The Puppet Master - the true story of the con man who claimed to be an M15 officer. I remember reading about the case in the Guardian when it came to light and not understanding how he could have got away with it for so long. It's an excellent - and shocking - watch. 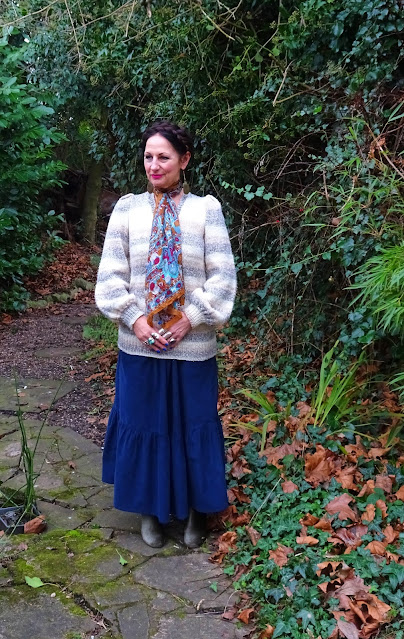 Although there was no frost when I got up, Tuesday seemed colder than ever and therefore the perfect opportunity to wear Sunday's charity shopped wool jumper along with my Dilli Grey cord maxi skirt, River Island velvet ankle boots and a vintage Indian silk screen printed scarf (both charity shop finds). 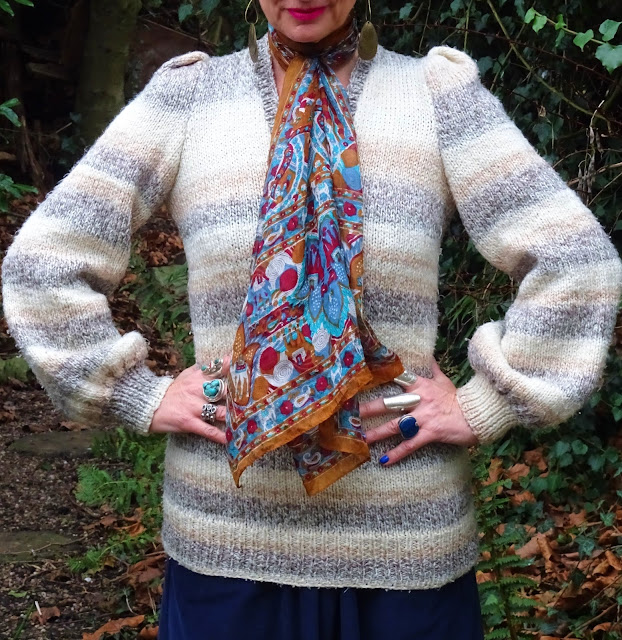 We headed to our favourite Black Country town for a morning of charity shopping. Although the mask mandate isn't due to be lifted until Thursday only about 50% of shoppers were wearing them but the shops were quiet and it was easy to keep our distance. 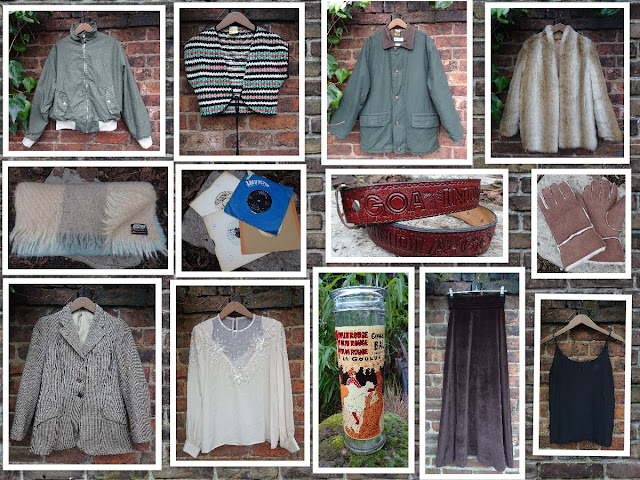 We found: a vintage Harrington jacket, a 1970s knitted top from Etam (remember them?), a Baracuta jacket (an insanely expensive English Mod label), a 1970s fake fur, sheepskin gloves, And Other Stories silk cami (for me), a handmade velvet maxi skirt, a Toulouse Lautrec glass vase (keeper), a 1980s pure silk Puccini blouse with the tags still attached, a 1940s tweed riding jacket, a 1950s St Michael Scottish mohair scarf, a handful of singles from the 50p box and a Goa souvenir leather belt (must be old, they don't make quality souvenirs these days). 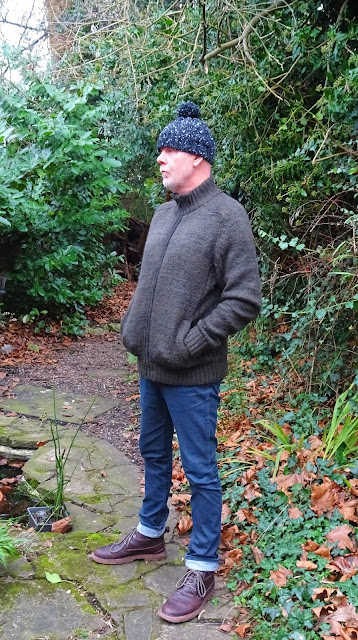 Lord Jon snaffled this fleecy-lined cardi for a couple of quid, feeling so cosy in it that he's not taken it off since he tried it on. He's rather attached to the hat I crocheted him, too. 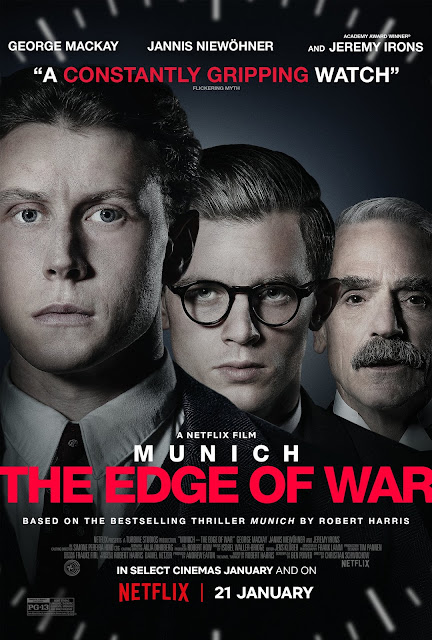 We'd had a flurry of eBay sales so Jon dropped them round to the Post Office whilst I laundered the morning's finds. The rest of the afternoon was spent catching up with Blogland and buying my return train tickets to Birmingham as I'm off to meet Nikki in the morning. Later we're planning to watch Munich: The Edge of War adapted from the book by another of my favourite authors, Robert Harris.
If you're wondering what singles we bought, there's the Tamla Motown classic When You're Young & In Love by The Marvelettes (1967), Frankie Goes To Hollywood's Relax (1983), Oh Well (Part 1 & 2) by Fleetwood Mac (1969) and the original version of He's Gonna Step On You Again by John Kongos (1971) which featured in BBC's amazing series The Serpent and was covered by The Happy Mondays. £2 well spent!
See you soon
Posted by Vix at Tuesday, January 25, 2022

Email ThisBlogThis!Share to TwitterShare to FacebookShare to Pinterest
Labels: Block Print, Books, Charity Shopping, Crochet, It's All About Me, Jon, Outfit, Pets