Take Me Outside, Sit in the Green Garden 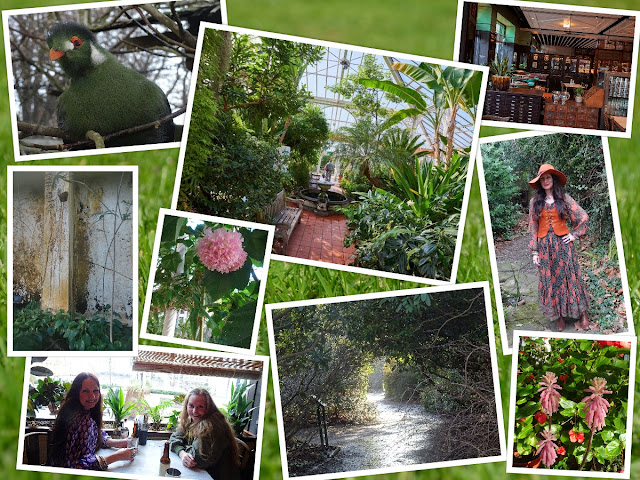 On Wednesday I caught the train to Birmingham, to meet up with my friend Nikki. From New Street station, we walked to the leafy suburb of Edgbaston, a leisurely two-mile stroll in the January sunshine. 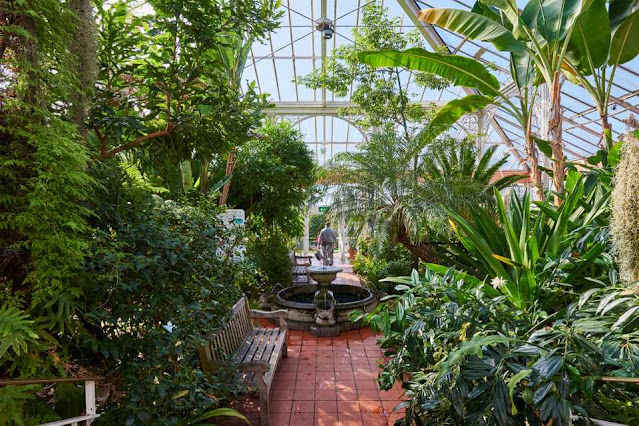 Our destination? Birmingham's Botanical Gardens, which opened in 1832 and are now home to over 7000 varieties of plants. We explored the Victorian glasshouses and basked in the deliciously humid Tropical House, established in 1852, imagining we were back in India before venturing into the Subtropical House which opened in 1871.

We wandered outside, an area encompassing 15 acres, walking across lush lawns and down twisting, shrub-lined paths, listening to the breeze rustling through the grasses, the bubbling of the water in the Italianate fountain and the squawks of the exotic birds, spotting snowdrops...and a cat!

We chatted to the parakeets, macaws, cockatiels and peach-faced lovebirds and admired the peacocks from afar, safely tucked away due to an outbreak of Avian flu and simply had to capture the bandstand for posterity. 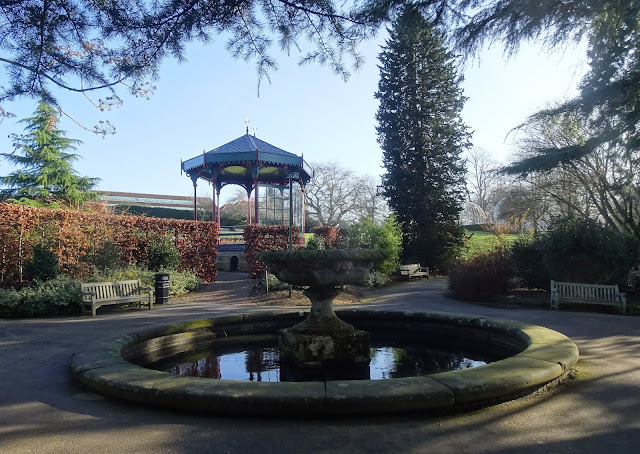 Walking back into the city was noticed a blue plaque dedicated to Washing Irving, the American essayist who lived in a house demolished many years ago. We admired a gorgeous Gothic gatehouse available to rent but on further investigation discovered that the interior didn't live up to the exterior - all grey paint and clean lines...yawn.

We'd been given discount vouchers when we'd visited Dishoon, the Bombay-style Parsi cafe we'd eaten at on our last visit so it would have been madness not to use them. 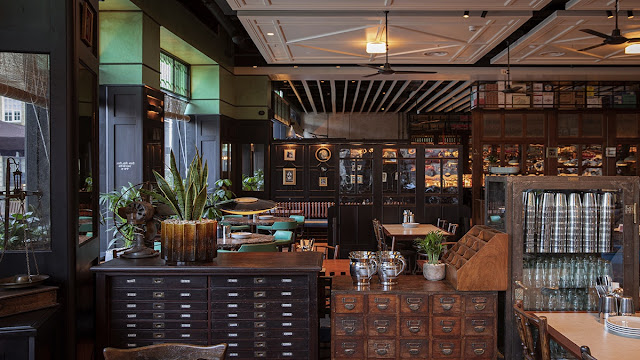 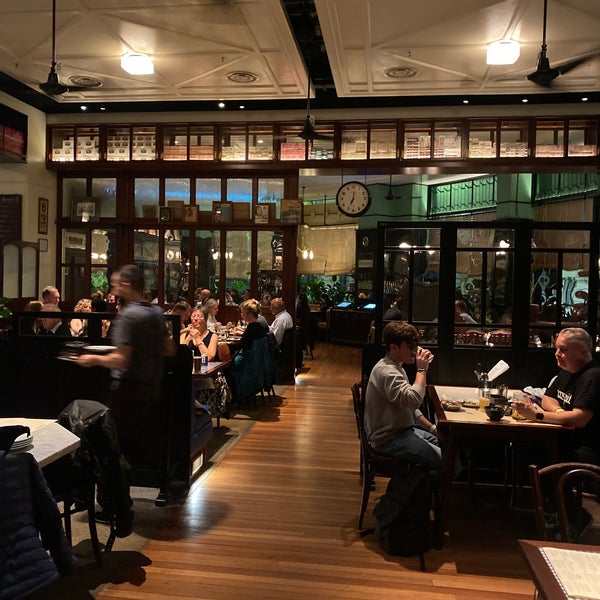 Along with bottles of IPA we shared another vada pau (hot potato vada, crunchy titbits and chutneys, tucked inside a soft homemade bun. sprinkled with the red spicy masala and green chillies) along with gunpowder potatoes (new potatoes smoky-grilled, broken apart, tossed with butter, crushed aromatic seeds and green herbs) and chaap pineapple tikka (Spiced soy kabab marinated and grilled with pineapple), again the food was so good our toes were tapping with joy. 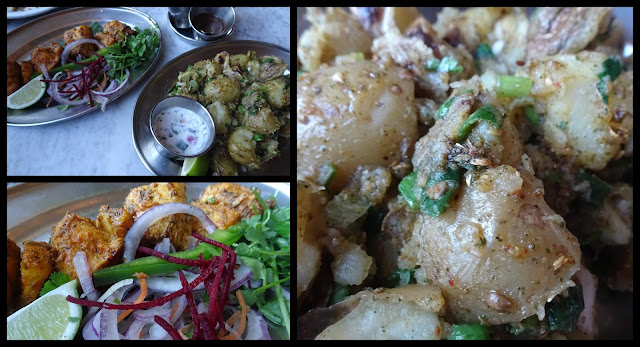 Keen to avoid commuter hell we said our goodbyes and caught our respective trains home, arranging to meet up again very soon. 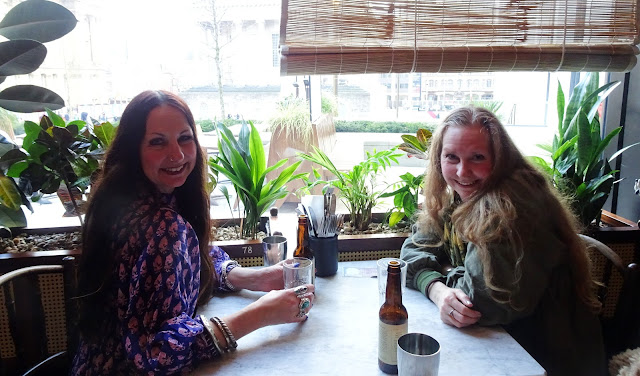 Jon picked me up at the station. Being a Wednesday the drinking continued with beers to accompany our pizza and rum and cola in front of the TV where we started watching The Alienist which I'd read during the first lockdown. I'm pleased to report that the TV adaptation is every bit as macabre and dark as Caleb Carr's book. 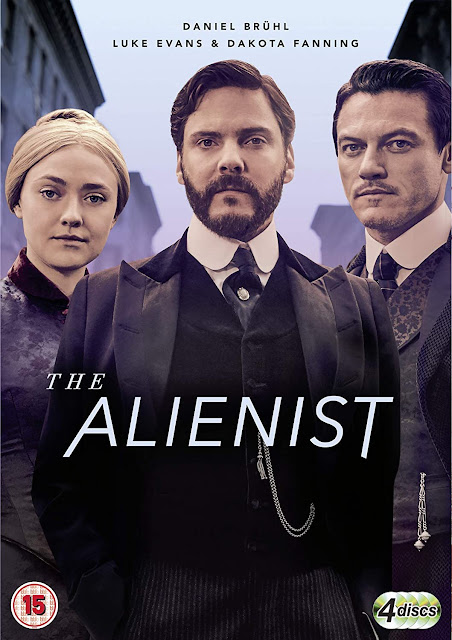 Unusually for me, I slept until 7am on Thursday. I wrapped parcels and caught up with Blogland before breakfast. In contrast to Wednesday, it was dark and drizzly and utterly hopeless for eBay photos. Jon was otherwise engaged with music stuff so I left him to it and walked into Walsall for a look around the charity shops. 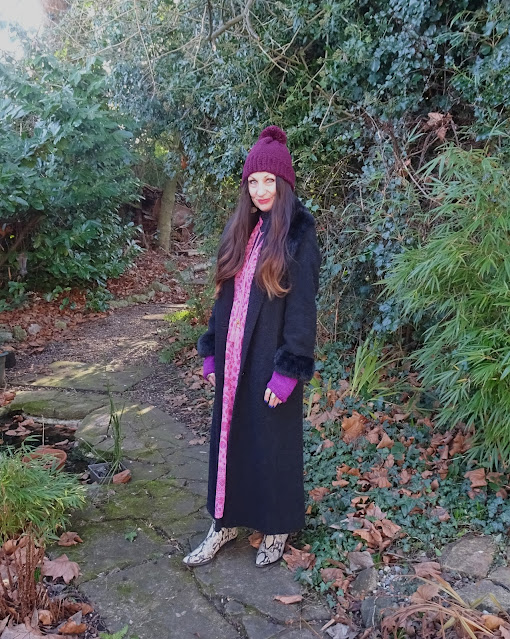 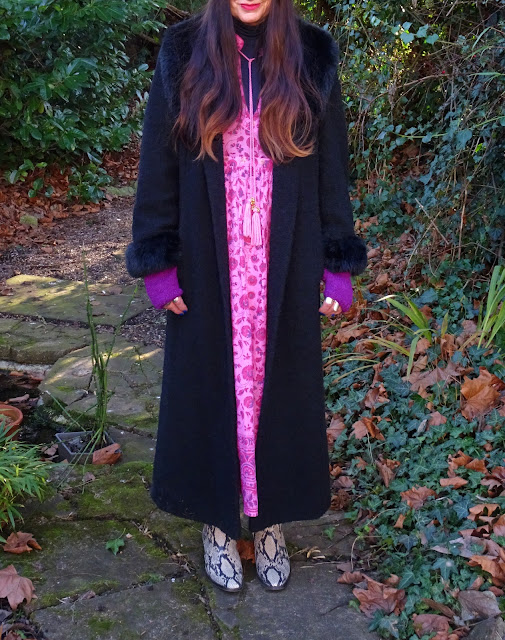 The mask mandate had been lifted but pretty much everyone was still wearing them (including me). Walsall used to have loads of charity shops but, since the pandemic, we're down to just four but the pickings were good and, weighed down and somewhat overdressed for the positively balmy 11°C temperatures I was a sweaty mess when I got home. 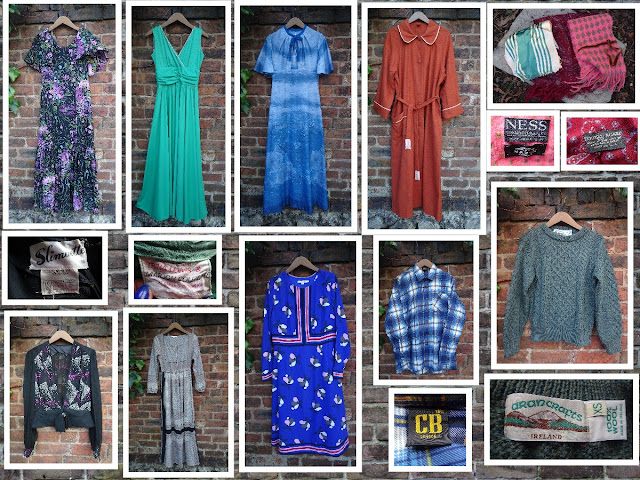 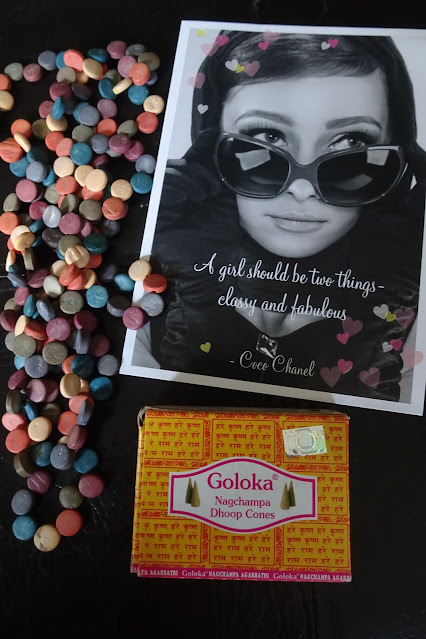 Talking of friends, there was a lovely parcel waiting for me from my lovely friend Betty (who blogs HERE) when I got back - incense cones in my favourite scent and a gorgeous wood bead necklace.  The evening was spent with another couple of episodes of The Alienist followed by The Apprentice. 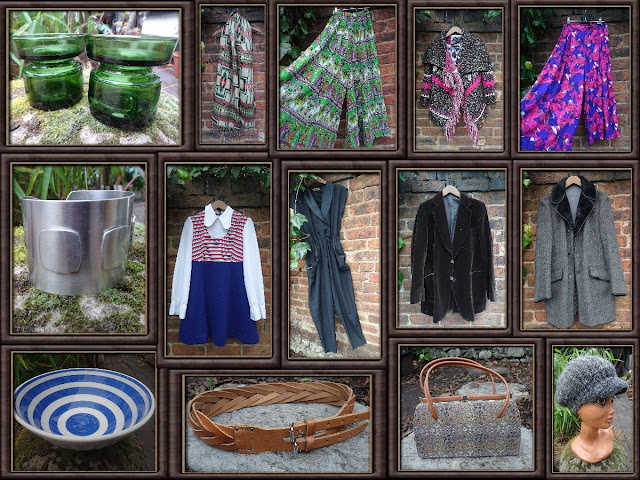 Friday was another chazza day and we drove over to our second favourite Black Country town for a rummage, coming home with: a pair of Danish Mid-Century glass candle holders for our collection; a huge wool scarf; Maxi length culottes with scenes from Ancient Egypt; a Superdry fringed cardi; 1980s rayon culottes; a 1960s Dunn & Co car coat; an Italian-made peaked wool cap; a 1970s Welsh tapestry handbag; a vintage plaited leather belt; an Italian-made mixing bowl by La Primula (to replace our two cracked ones); a 1970s Sheffield Steel cuff (and now mine!); a 1960s Mod mini dress; a 1980s Richards jumpsuit and a gents 1970s St Michael velvet jacket. 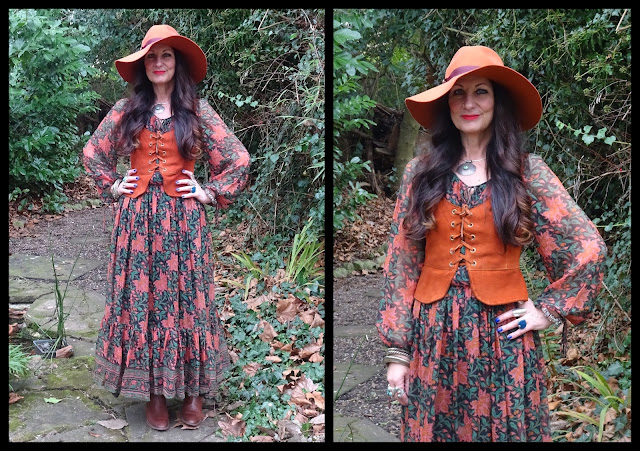 I've owned this vintage suede waistcoat for over a decade and the 1970s Treacy Lowe tissue silk dress for at least seven years and yet today was the first time I'd worn them together. I'm not sure why the combination had never occurred to me before but I'm glad it has now. 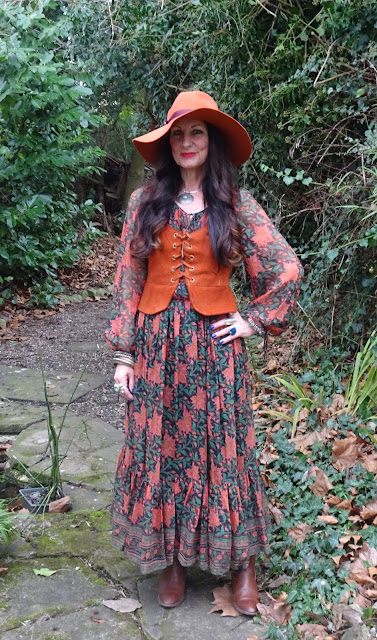 After my last post, Beth asked what Jon kept in his bag. Years and years ago, What's in my handbag? used to be a popular choice for a blog post so here's the updated version for the 2020s - What's in my Man Bag? 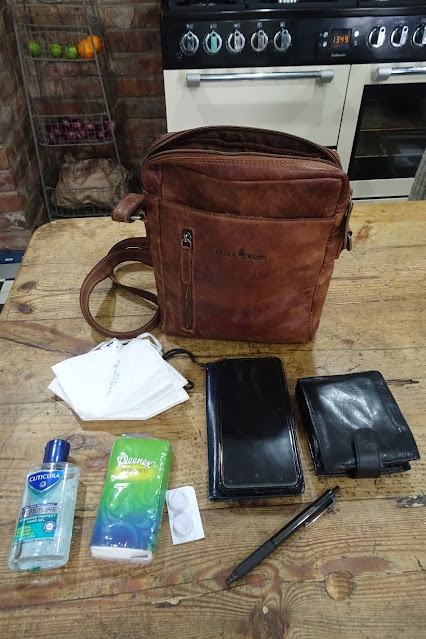 Phone, wallet, pen, tissues, hand sanitiser, a couple of throat sweets and a face mask with replacement filters. There's usually a set of keys as well. 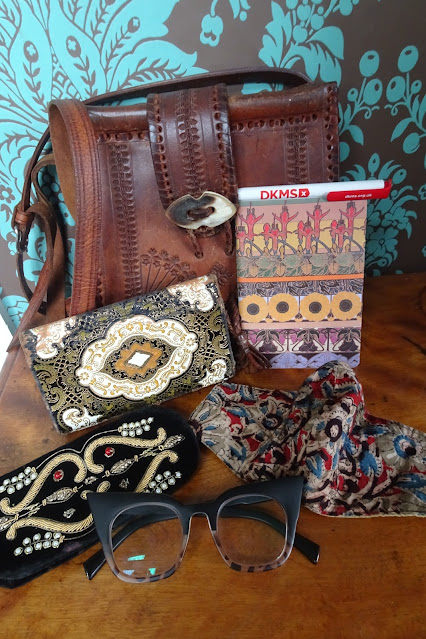 And here's the contents of my woman bag, reading glasses & case, facemask, purse, a notepad and a pen. When I'm travelling by train I take an old mobile phone Jon gave me so I can show my virtual tickets to the guard but the rest of the time it's switched off and kept in a drawer in the kitchen. #luddite 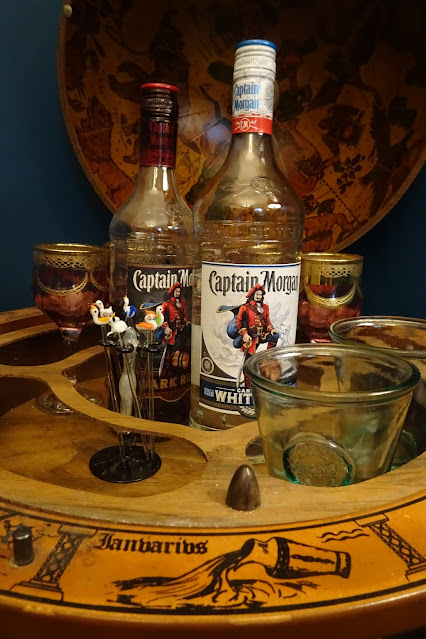 Friday means....rum. I'm off to catch up with Blogland (and slice some limes) before the bar opens. Chin-chin! 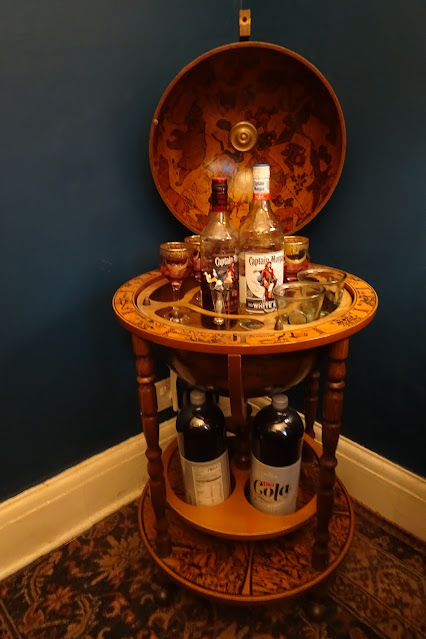 I'll leave you with the inspiration for my blog title from Birmingham's finest, the beautiful Laura Mvula. I cannot believe this song is ten years old!
Posted by Vix at Friday, January 28, 2022

Email ThisBlogThis!Share to TwitterShare to FacebookShare to Pinterest
Labels: Charity Shopping, It's All About Me, Jon, Kinky Melon, Out and About, Outfit