Set in false anticipation, I'll be waiting in the photo booth 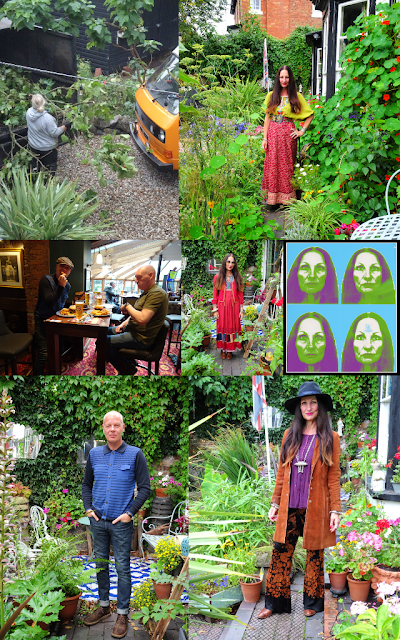 This embroidered ramie top, snaffled from the clearance charity shop, leapt out at me when I looked in the wardrobe on Sunday morning and my 1970s Anokhi maxi skirt seemed like the perfect accompaniment, teamed with the vintage Kashmiri woolwork belt I picked up from last Thursday's chazza expedition. 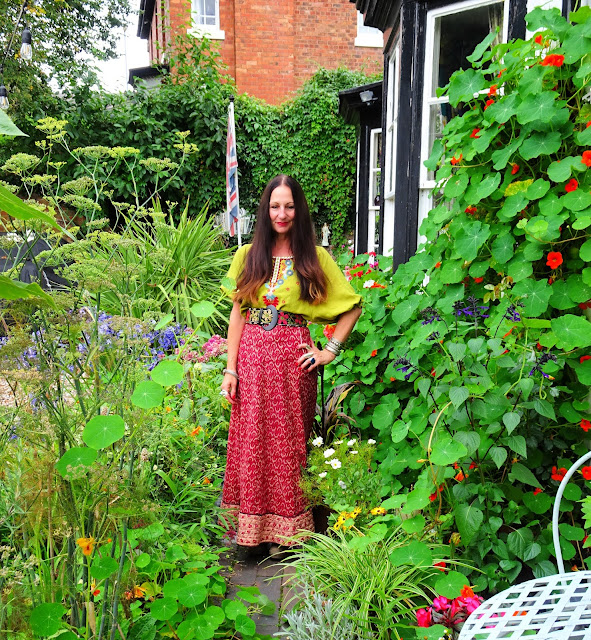 The clearance chazza was delighted with the six bags of clothing we dropped off, especially as most of it was menswear, something most charity shops are desperate for. 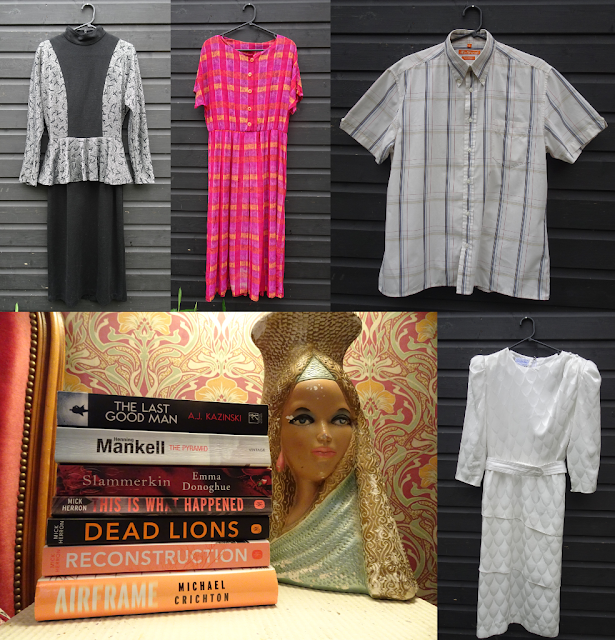 We came back with a pile of books (we've both already read Mick Herron's This is What Happened but it's so stupendously good that it deserves a re-read), a 1980s Leslie Fay midi dress, a 1980s Shelana lurex cocktail dress, a Ben Sherman shirt from their "Vintage" range and a handmade midi dress. 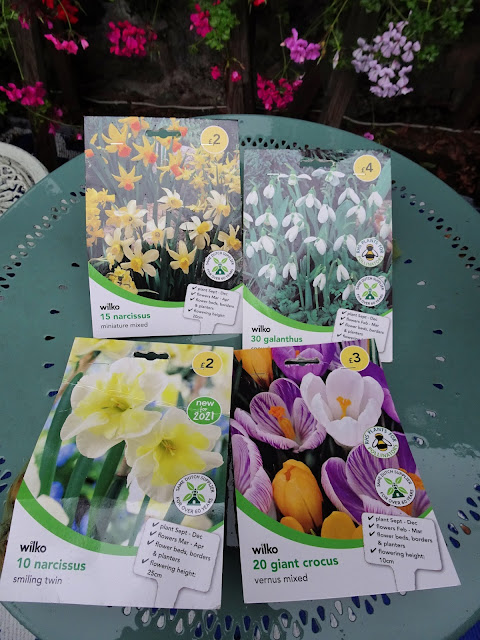 After a walk down to Wilkos for Spring bulbs, we had lunch, stuck our clothing finds in the washing machine and spent the afternoon photographing and listing the rest of the footwear in the stockroom. 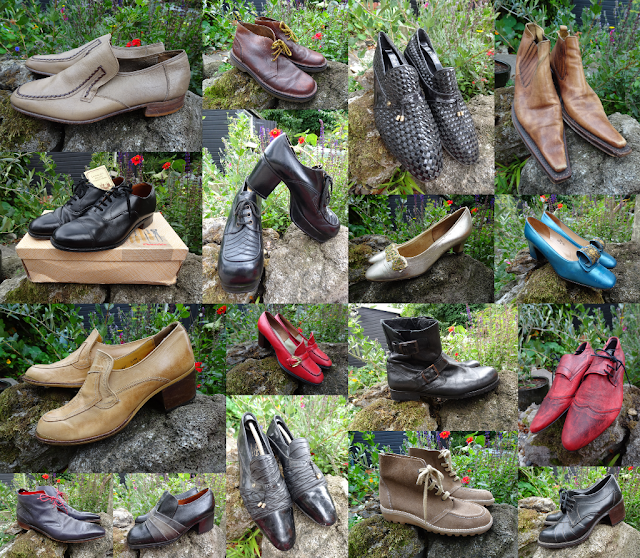 I'd harvested the rest of the patty pan a few days earlier and, as no more flowers had appeared, pulled up the plants and threw them in the compost bin. Frank promptly claimed the bed as his own. 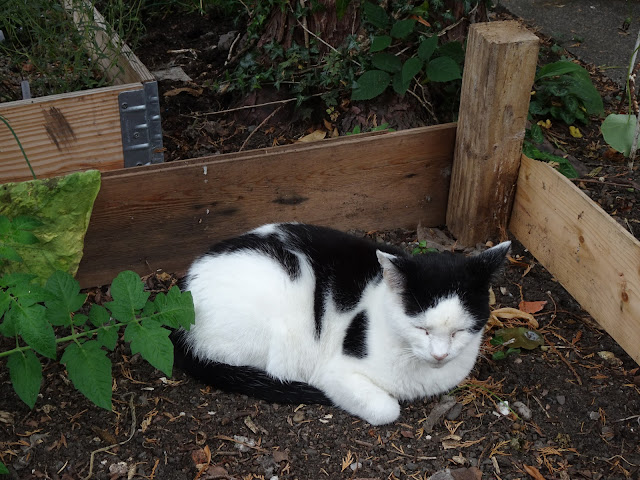 We cooked more of our crops for tea - potatoes roasted with peppers and onions and red onion & courgette fritters (made with the rest of the mouldy cheese) and seasoned with herbs from our bed. We finished watching the rest of The Hunt for a Killer and Gone Fishing. 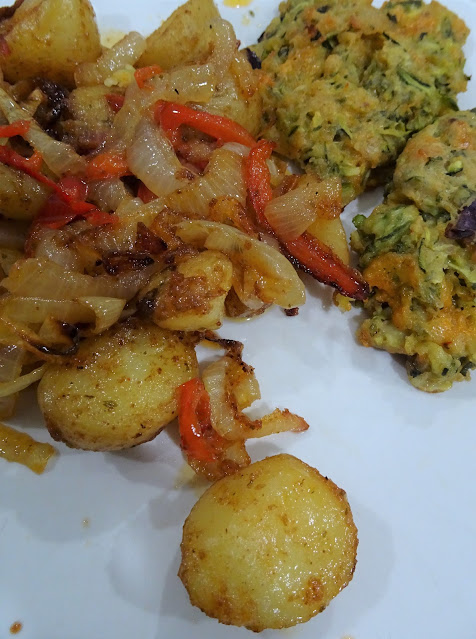 On Monday, after my Wii Fit session, I ironed the previous day's charity shop finds and wrapped the eBay sales which Jon dropped off at the post office after breakfast. The postman called, bringing with him the Bank Robbers aka Clarks' Desert Treks I'd scored for Jon from eBay but alas, still no sign of my passport. 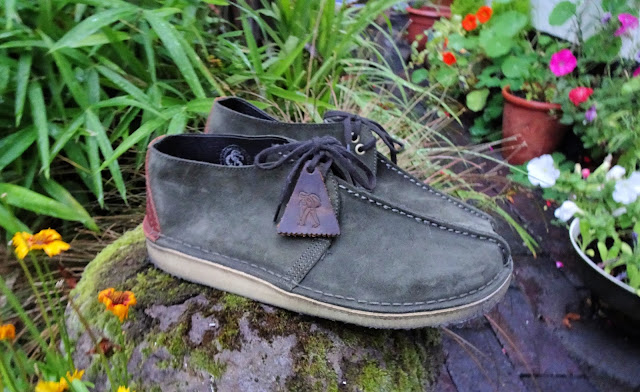 I fired off an email to the UK passport office enquiring as to why my application status was still displaying "old passport received", almost a month after I'd sent it off. Meanwhile, Jon tried yet again to contact the planning office at Walsall council. One of the branches on our huge London planes (Platanus x hispanica) has snapped and is suspended on the lower branches, dangerously overhanging the fence over the avenue. As they have preservation orders we can't do any work on them without prior permission from the officer in charge of the borough's trees.  Over the last month, Jon's sent him two emails and tried calling every day, only for the line to go dead each and every time. Yesterday he managed to get through to a receptionist on the main council switchboard only to be told that the officer he needed to speak to was in the office but wasn't answering the phone. Jon left a message with her (and sent him another email) saying that he was getting a tree surgeon out in the morning as he feared a car, or a passer-by, was in imminent danger if something wasn't done soon. We risk a huge fine but doing this but neither of us wants someone killed by one of our trees. Bloody, buggering bureaucracy! 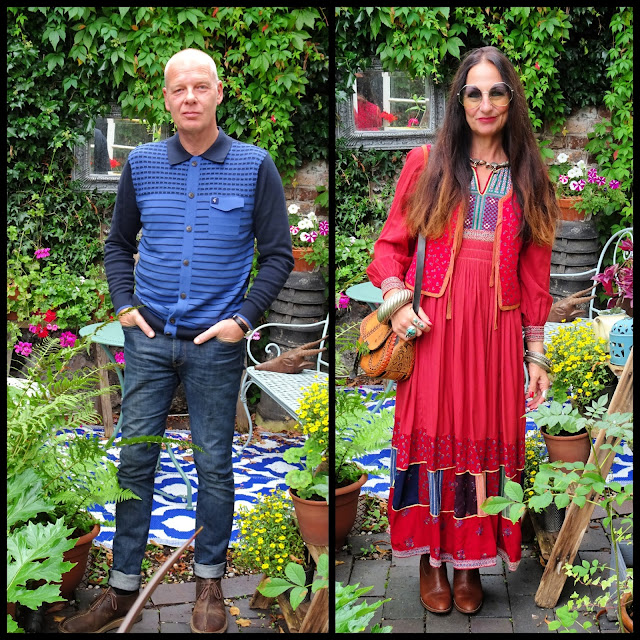 Frustrations aside, it was to be a momentous day, after an 18-month hiatus we were having a Wetherspoons all-dayer. 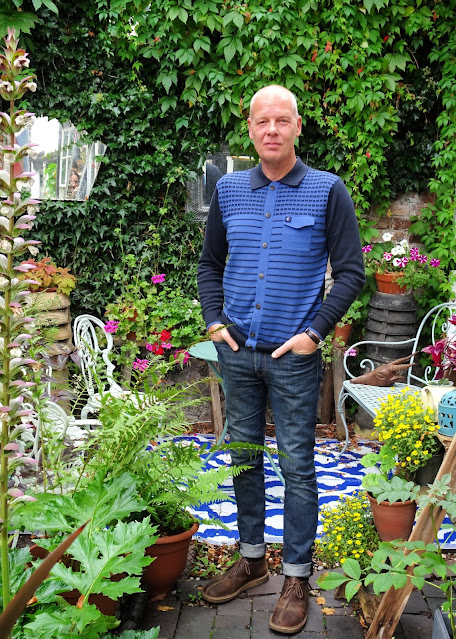 After the heat of the previous week, the temperatures had dropped back to normal. Jon wore his Gabicci wool fine knit top, Levis and beeswax Bank Robbers and I wore my vintage Janet Wood for Monsoon Afghan dress with a matching waistcoat. 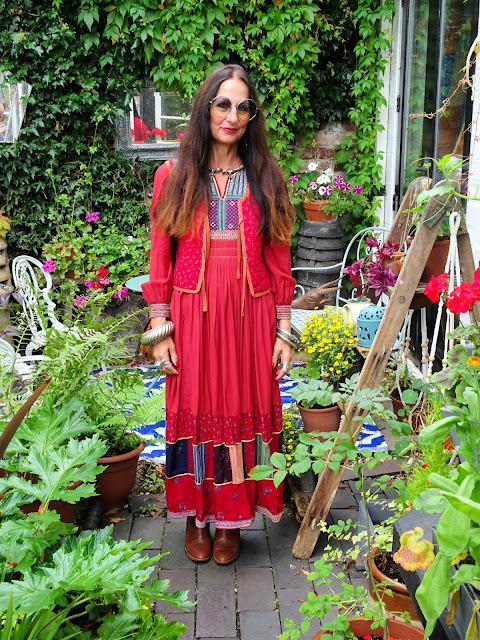 After popping into the cobblers for a can of suede protector for Lord Jon's new boots, we made our way to 'Spoons, meeting Tony at 1pm and tipping out 8 hours later. We're disgraceful! 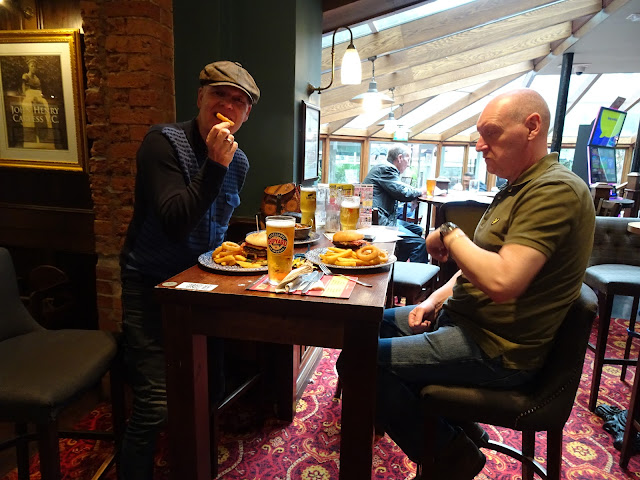 To anyone twitchy about pubs, 'Spoons felt perfectly safe, with plenty of space between the tables and decent ventilation. 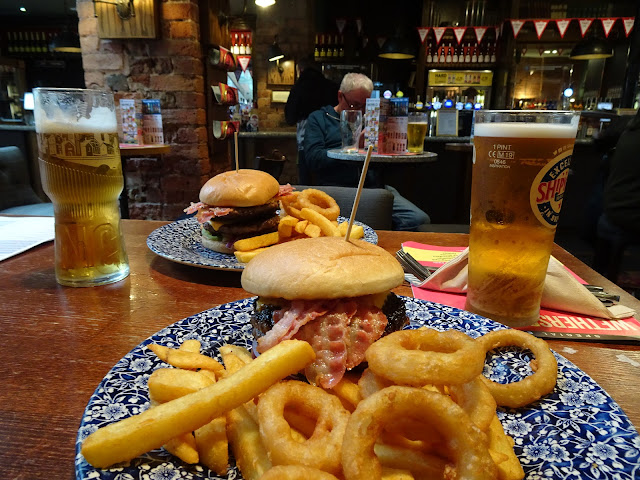 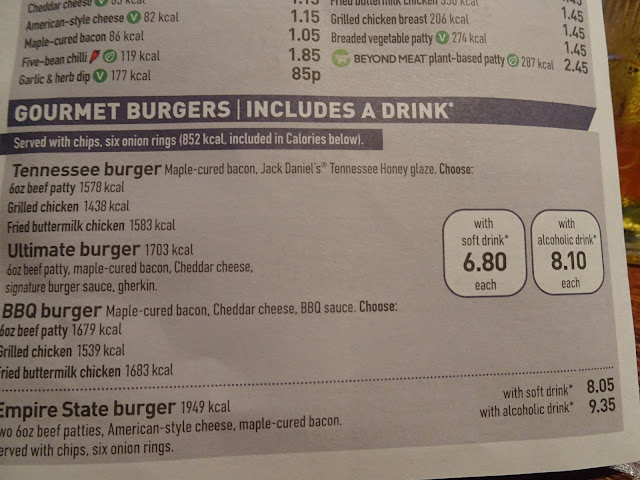 The boys had Empire State burgers which they reckoned had increased in size since last year and just about managed to finish them. 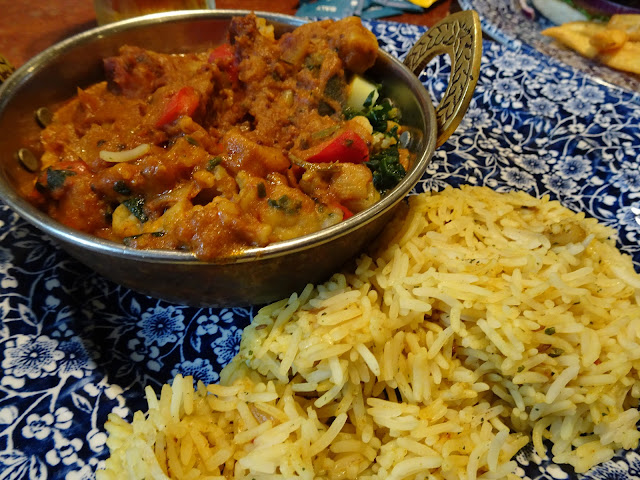 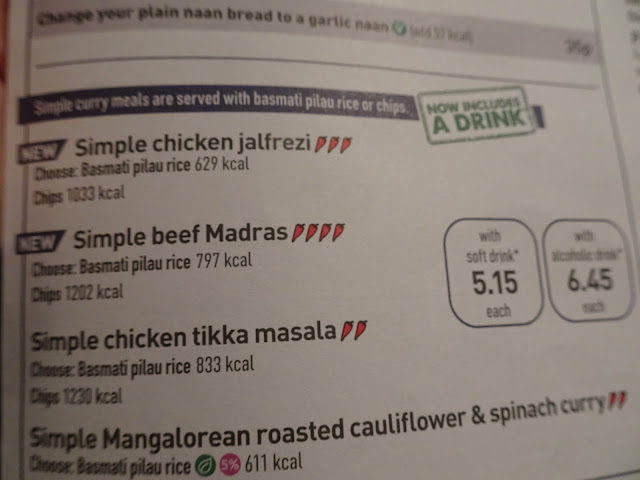 The simple Mangalorean roasted cauliflower & spinach curry was new to the menu and, my goodness, was it good! My plate was empty in minutes. We spent 24 hours in Mangalore back in 2017 (HERE) and their cuisine really was incredible. 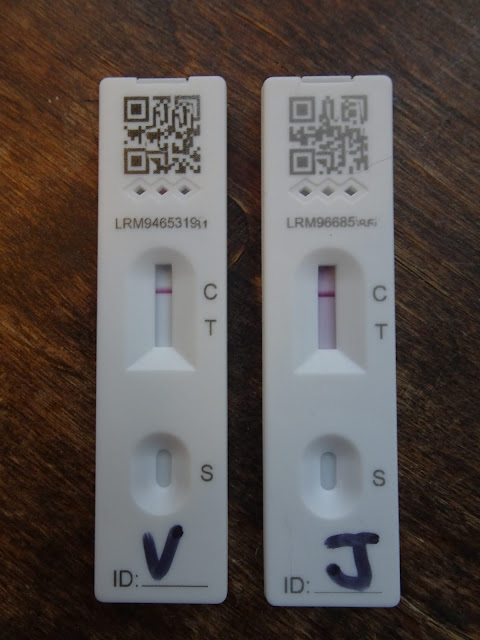 On Tuesday I was wide awake at 5am. It was still dark and the rain was bouncing off the paving stones. After my Wii Fit workout, we did our lateral flow tests, which again came back negative.

With still no word from the council, the tree surgeons arrived and spent the morning sorting out the London plane. Meanwhile, I checked my emails and discovered one from the passport office saying that the photo I'd submitted over a month ago 'doesn’t meet the photo standards set by the International Civil Aviation Organisation' despite the fact that when I uploaded the photo (which Jon had taken with my digital camera) the app on the website said that it was good and that it "reached their standards".....arghhhh! 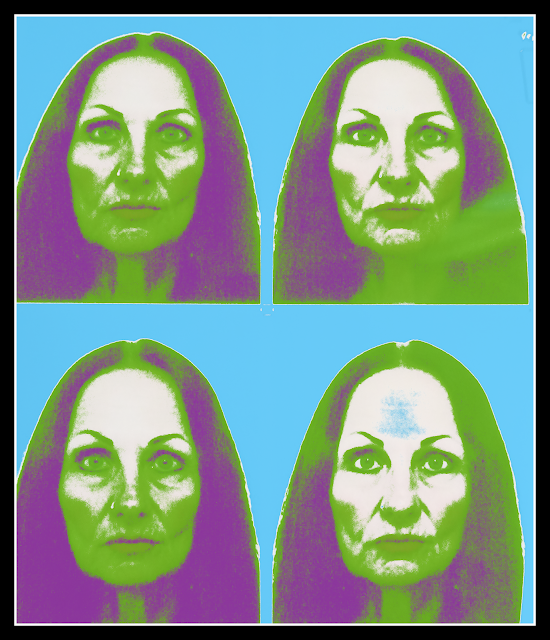 Anyway, after lunch, we walked into town - it had finally stopped raining - and went to the approved photo booth for UK passports within Asda (the first time I'd been in a supermarket for 19 months!) Using his phone, Jon logged on to the passport website, we entered the barcode on the photos and submitted them remotely. It seemed rude to be in town and not visit the chazzas so we had a rummage before heading back up the Hill of Doom. 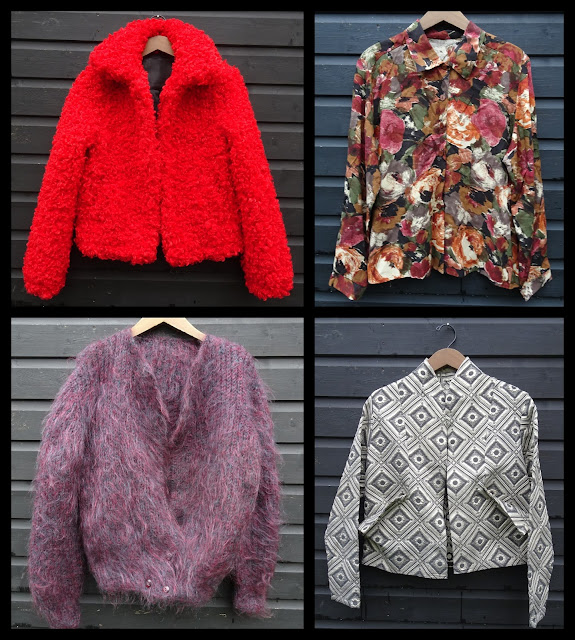 I can't decide if this insane red coat is Mongolian lamb, (the previous owner has removed the labels), the '80s mohair jumper is handmade as is the 1960s metallic evening jacket. This vintage St Michael shirt just screams Autumn, doesn't it? 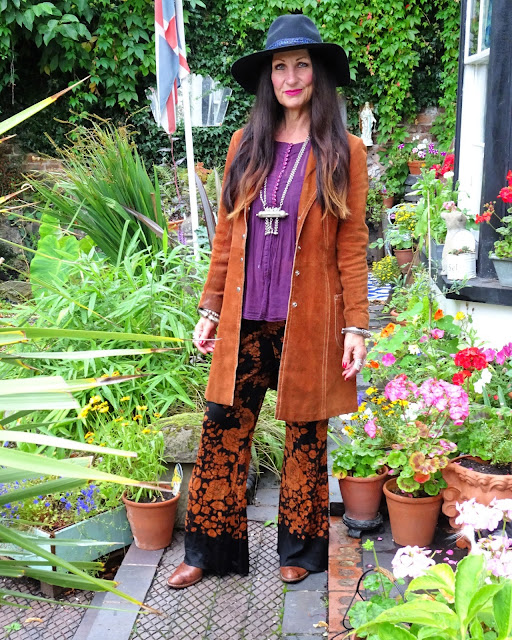 Don't adjust your screens, I'm wearing trousers! These were from the bag of goodies Cheryl gave me the other day, they're 1970s flares (as rare as hen's teeth!) The vintage suede jacket was also one of hers - isn't it fab when your friends are the same size and have the same taste in clothes? The 1960s Jeff Banks W1 blouse was a car boot find about 20 years ago and the Reiss fedora & Toast cowboy boots were eBay purchases. Several people stopped me and told me that I looked amazing, fabulous and gorgeous. I'll have to wear them more often! 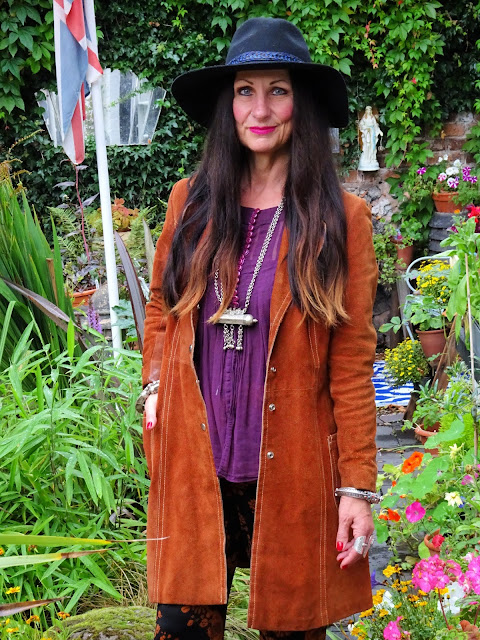 Back at home I checked my emails and discovered that my passport application had now been approved and was in the process of being printed.....will we leave these shores in 2021 or will we be banged up after getting our tree illegally pruned? Watch this space!
PS If you're wondering about my blog title, it's pinched from the god-like genius that is Pete Doherty.
Posted by Vix at Tuesday, September 14, 2021

Email ThisBlogThis!Share to TwitterShare to FacebookShare to Pinterest
Labels: Books, Charity Shopping, ebay, Jon, Out and About, Outfit