It's All Greek To Me! 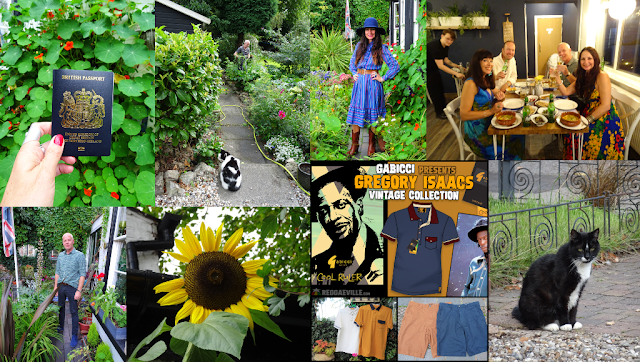 On Wednesday morning, after my Wii Fit workout & wrapping the eBay sales, we had breakfast and drove over to our second-favourite Black Country town for a bit of charity shopping. We'd been forecast a couple of days of sunshine and heat and I wore my Wyse, London dress I'd found in Barnardos a few weeks ago. 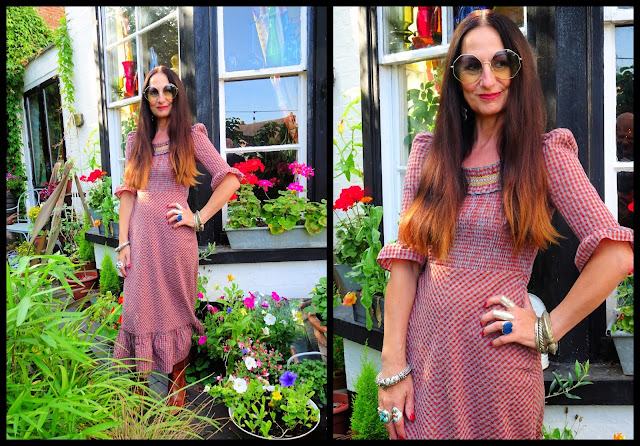 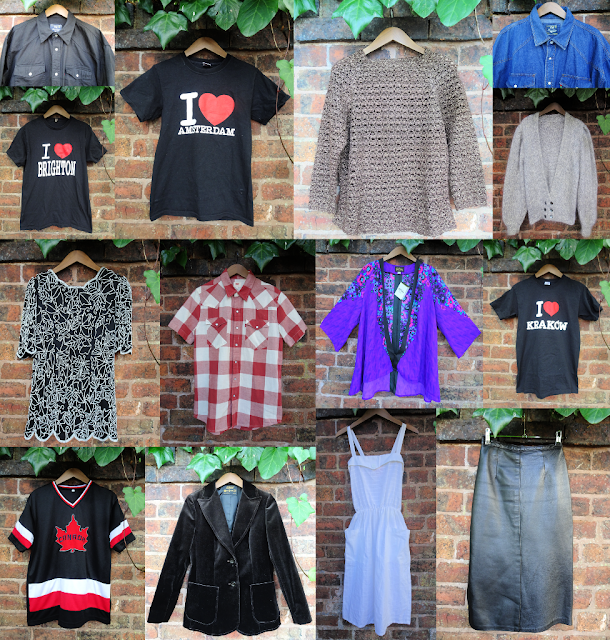 At £4, Jon couldn't resist snaffling this incredible 1970s psychedelic bedspread from Vantona's Mediterranean Range.  I can see why they were inspired by the Med, the colours remind us of the glorious sunsets. Vantona was established in Lancashire in 1929 and are still producing bedlinen. It'll be perfect for Gilbert. 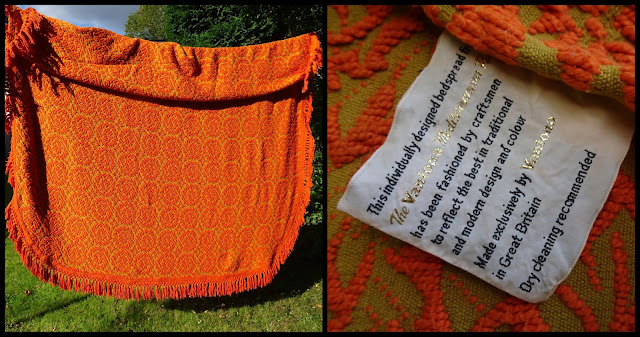 On the way back we called in on our friends, Lynn and Brendan and their handsome 19-year old cat, Ferdi. After a coffee and a catch-up, we headed home. I spent the afternoon laundering and photographing the morning's finds whilst Jon, buoyed up by an email letting me know that my passport had been despatched, had a look at his holiday clothes and decided that as the shirts he was planning to take were all patterned, he needed plain shorts. I  went online and managed to snaffle two pairs of shorts in a British high street store's end of season sale, reduced by 68% to a tenner. 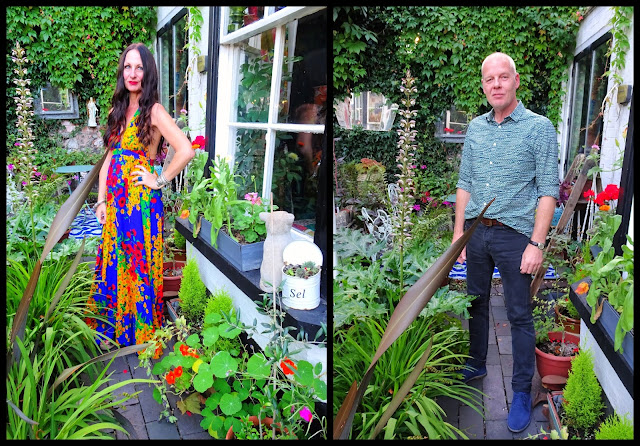 No, we're not all dressed up with nowhere to go, for the second time in a week we were going out! Jon's wearing second-hand Levi's with an African print cotton shirt and Clarks' Originals in blue cord (both charity shop finds). I'm wearing another of Cheryl's old garments, a 1970s cotton halterneck by California Charmer of Hollywood and used my chazza-shopped Babyliss Pro-styler to create Medusa waves.

As part of Al's birthday present, we were taking them to Kouzina, the Greek restaurant we'd been to for Jon's birthday. We'd booked a table for 7.30pm and they picked us up at just after 7. The staff were delighted to see us again and had gone overboard with the birthday stuff, there were banners, signs and Happy Birthday confetti scattered across the table. They even stuck a sparkler in his baklava! 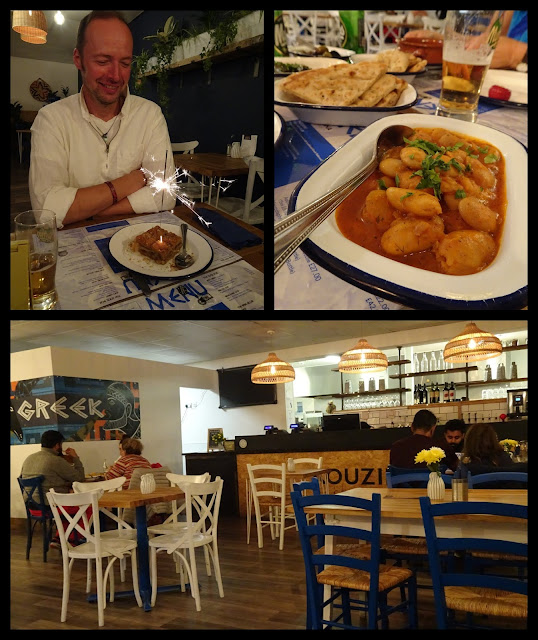 The bouzouki soundtrack, delicious home-cooked food and warm welcome from the waiting staff couldn't have felt more Greek, the only difference was the early hour at which we ate (it's rare to eat before 10pm in Greece). We were back at Stonecroft drinking coffee at 9.30.

When I got on my Wii Fit on Thursday morning it announced that it was our 4,300th session together. It looked like turning into another gloriously sunny day and I had a wander up the garden, cutting some sweetpeas and harvesting courgettes and a few strawberries. After breakfast, we sat outside with our coffees. The MyHermes driver arrived with the new shorts and a couple of Gabicci polo shirts from Gregory Isaacs' vintage collection which Lord Jon had found going for a song on eBay (ha!) a couple of days earlier. 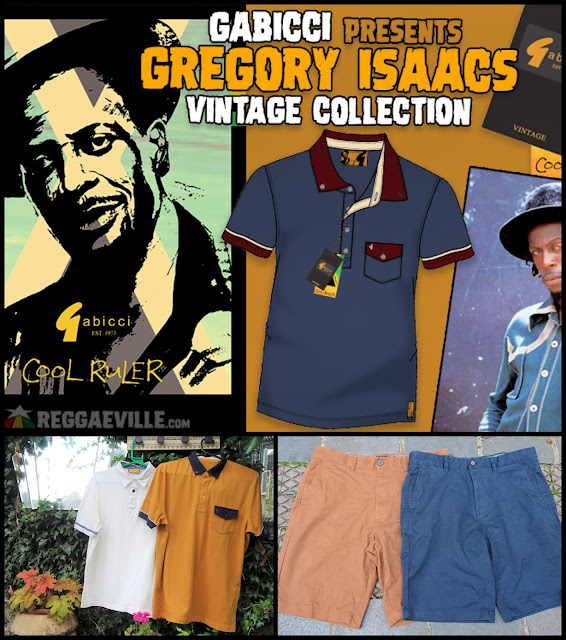 I'd had an email letting me know that my passport was out for delivery so I went on to the Kobo website and treated myself to 6 new ebooks for just under £12 - I can't go anywhere without plenty to read! 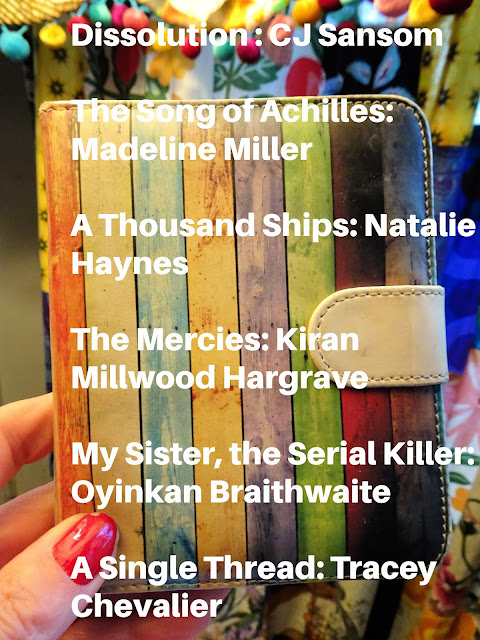 I weeded the cracks in the pavers outside the gate and pulled up the Empress of India nasturtiums which, after months of flowering, had started to look a bit ragged and tatty. I was just sweeping up when a van pulled up and a man asked if I was waiting for a passport. I could have kissed him when he handed it over but restrained myself. He seemed more enamoured with Frank than me, telling him how gorgeous he was.

Back in the depths of the Spring lockdown, I'd optimistically booked flights to Greece for the Autumn but had to delay them a couple of weeks due to the passport crisis. Now it was all systems go! Whilst Jon sorted out the PLFs (passenger location forms), airport parking and the first three night's accommodation, I checked in online and uploaded the completed PLFs and copies of our vaccination certificates onto our flight booking details. After lunch, I got into practice and lay in the sunshine with my current read. 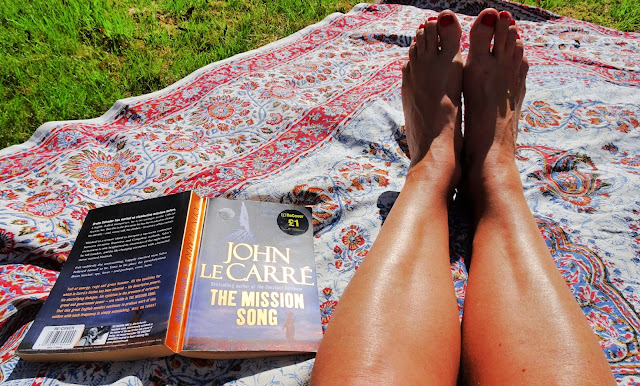 Tea was half a pizza and a large glass of wine. Later we caught up with two days of The Antiques Roadtrip and Tuesday night's A House Through Time. 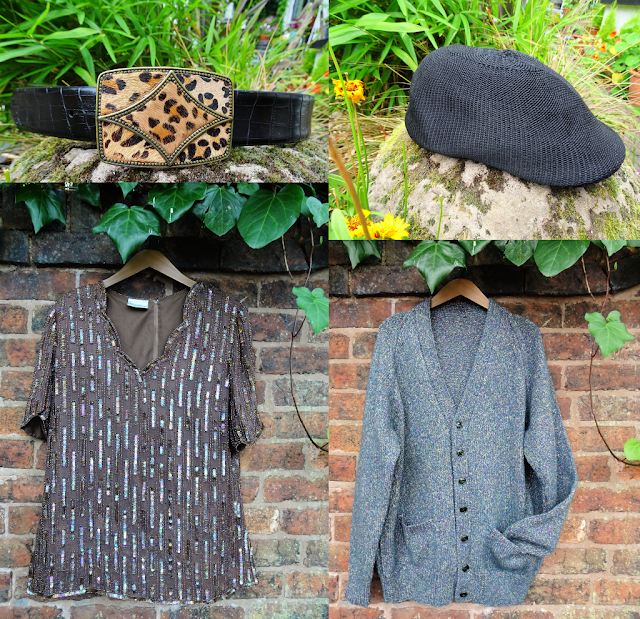 On Friday I wrapped the eBay sales and did my final Wii Fit workout of the week. After breakfast, we popped out for a bit of charity shopping although pickings were slim; a 1980s Frank Usher silk and sequin cocktail top (I'm finding a lot of these of late, the chazzas are stuffed with high heels and going out clothes). We also found a vintage handknitted cardi, a leather belt with a ponyskin buckle and a 1960s Kangol cap.
A few months ago, I'd shared some of our charity shop finds and Kezzie had messaged me, asking if I'd be interested in swapping a vintage Grecian-style dress with a 1980s St Michael cotton prairie dress I'd loved when she posted a photo of her wearing it on her blog. 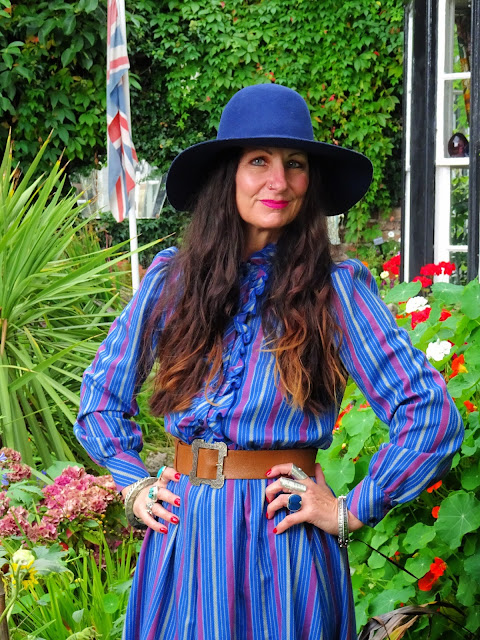 Today was the first outing for Kezzie's dress and it was a joy to wear. My hair had been piled up on top of my head since Wednesday night and I was delighted to discover that my Medusa curls had stayed in when I'd undone my top knot. HERE'S Kezzie looking beautiful in the dress I swapped for mine. 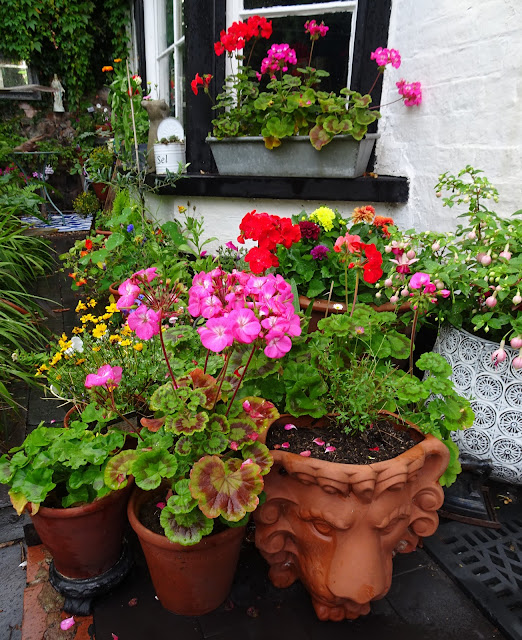 After lunch, the sun had finally emerged from behind the clouds so I changed into my gardening gear, started planting the Spring bulbs and swept up the leaves which Jon wheeled up the garden and deposited in the dedicated leaf mould bin he'd made from the old shed.

We spent a lovely couple of hours pottering about, ably assisted by The Lads.

With the transport secretary due to announce changes to the travel restrictions, we've been on tenterhooks all day. Within the last 15 minutes, we've discovered that, from 4th October, all countries are either green or red (no more amber!) and that the fit to fly test for fully vaccinated passengers returning to England will be scrapped thus saving us £60 (more money to spend on Greek salads and Mythos) - maybe that passport delay happened for a reason!
We've just poured ourselves a large glass of wine to celebrate...chin, chin!
Posted by Vix at Friday, September 17, 2021

Email ThisBlogThis!Share to TwitterShare to FacebookShare to Pinterest
Labels: Books, Charity Shopping, ebay, Food, Gardening, Greece, Hair, It's All About Me, Jon, Out and About, Outfit, Pets