Something for the Weekend 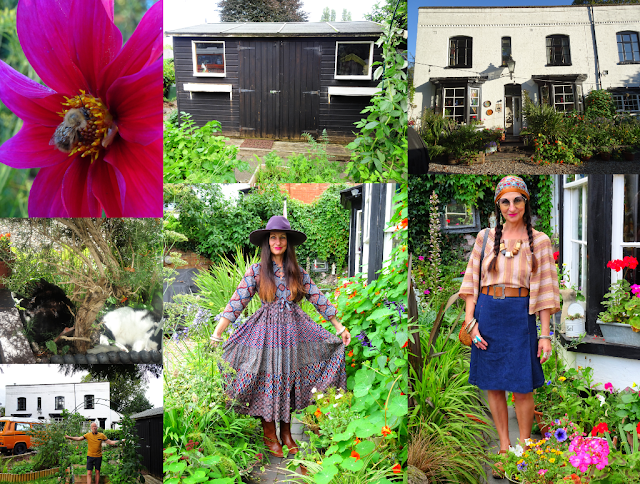 It's been a busy weekend here at Stonecroft with a large portion of it spent attempting to sort out the garden which is still blooming madly. Despite a forecast for torrential rain, other than a few sharp showers on Sunday morning, it's been glorious for days. 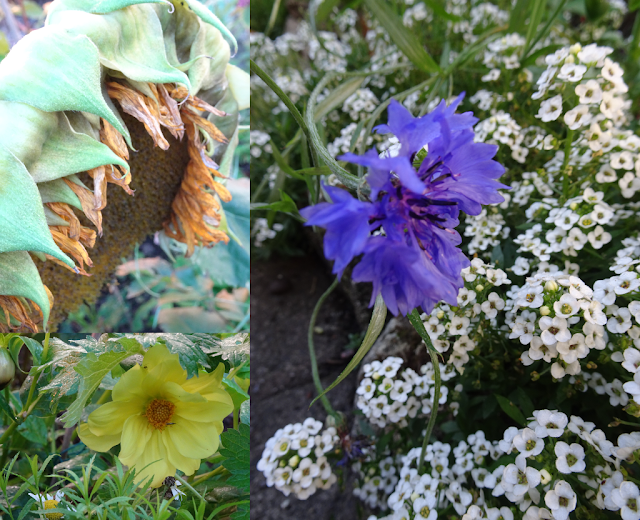 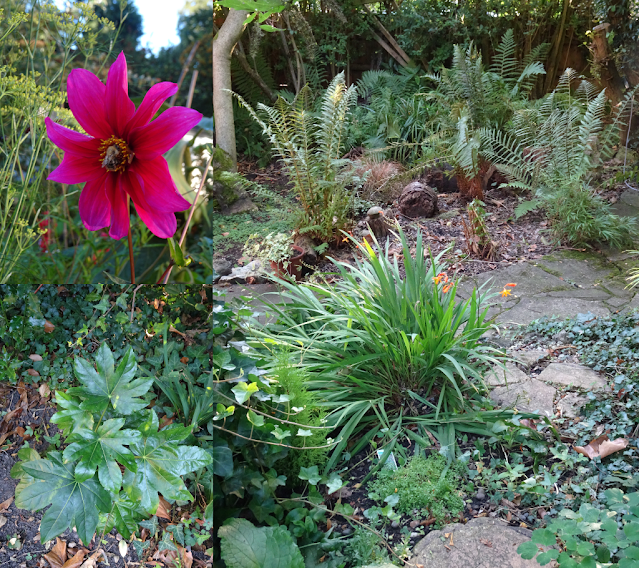 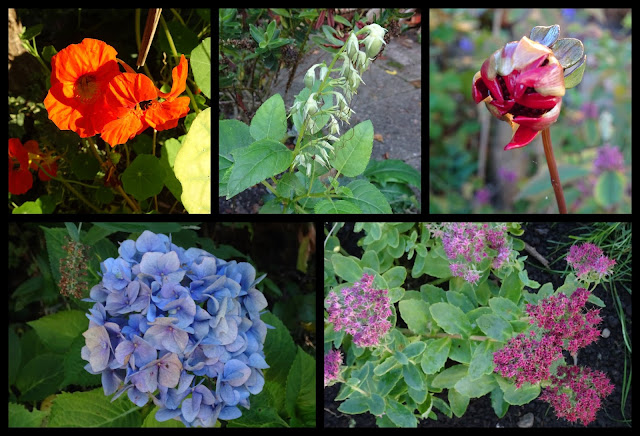 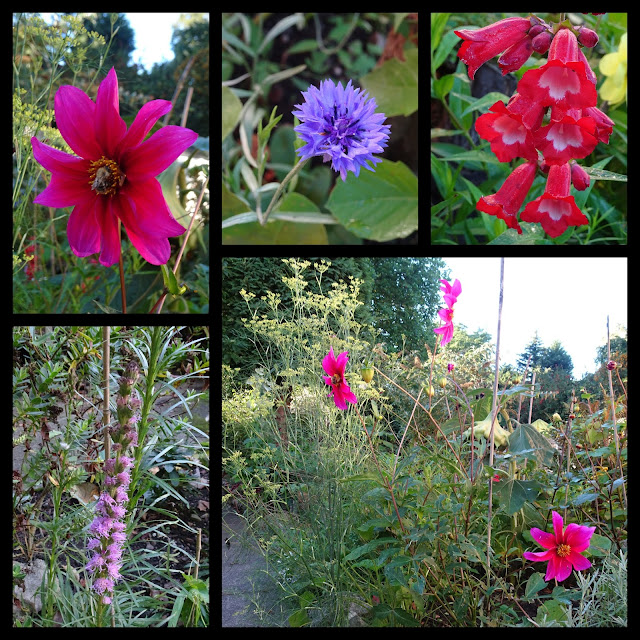 My plan for growing tomatoes in the Kinky Shed windowboxes failed miserably so I emptied them into the compost heap and Jon repainted both the boxes and the window frames. We'll plant them up with some Autumnal blooms when we're back from our travels. 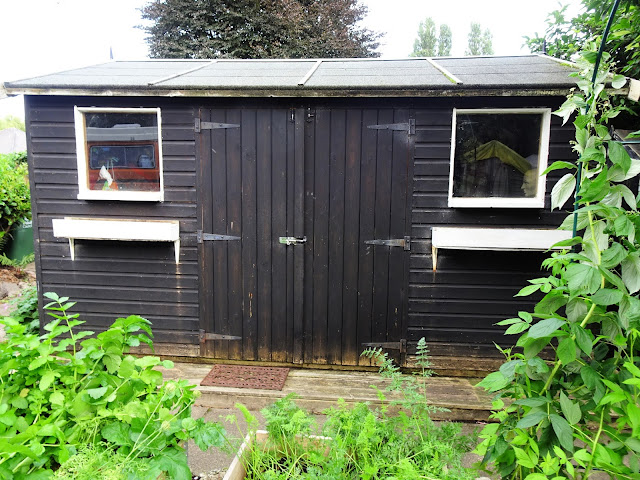 Over the weekend, we planned an itinerary for our trip (very grown-up!) and booked our accommodation.  As usual, we'll be travelling around on local buses and staying in different places, this time in a heritage hotel in the heart of the Medieval quarter in the island's principal town, in a tiny beachfront cottage 50 yards from the Aegean Sea and in rooms that stand in the shadow of a 2,500-year-old acropolis. It'll be my third visit to this particular Greek island. I first went 30 years ago (on a lairy 18-30s holiday with a girlfriend) and more recently, in 2001 with Jon although we were there in August and it was 40°C in the shade so we didn't venture further than our 7th Century stone house and the beach. 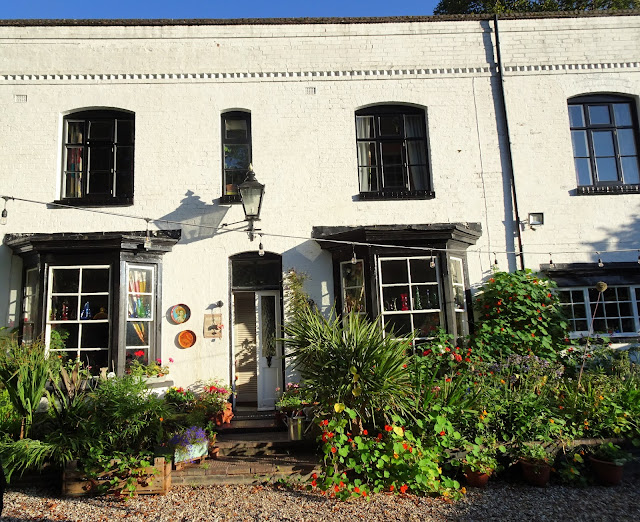 Following the recent government update, the over 50s were urged to have an annual flu jab to stop the strain on the NHS this winter so Jon booked us in at Boots the Chemist on Sunday. We were expecting to pay but discovered that it's free for us old folk! 24 hours later and, just like the last time, we've suffered no ill effects. We had to pop into the clearance charity shop on the way there, donating a hi-fi system, three shirts and three pairs of shoes from the stockroom, a blanket and a box of hair dye in a colour I no longer use. 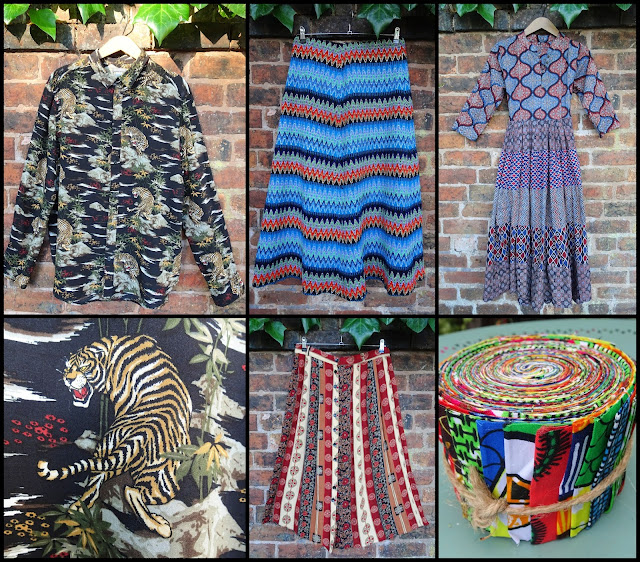 Needless to say, we came out with a bagful of goodies, which included an amazing Versace-inspired tiger print shirt for Jon (it's already in the travel bag!), a super-funky 1970s zig-zag knit maxi skirt in a rare larger size, a stunner of an Indian block printed midi dress, a roll of West African waxed cotton offcuts and a 1980s button-thru' midi skirt. 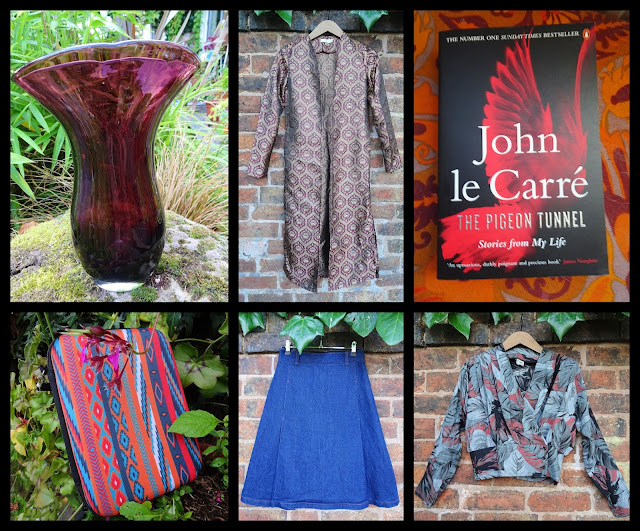 There was also a 1960s hand blown glass vase, an Indian silk brocade coat, a John Le Carre novel, a 1980s blouse, a new-with-tags protective case with a fab print and Valley of the Dolls denim midi skirt. 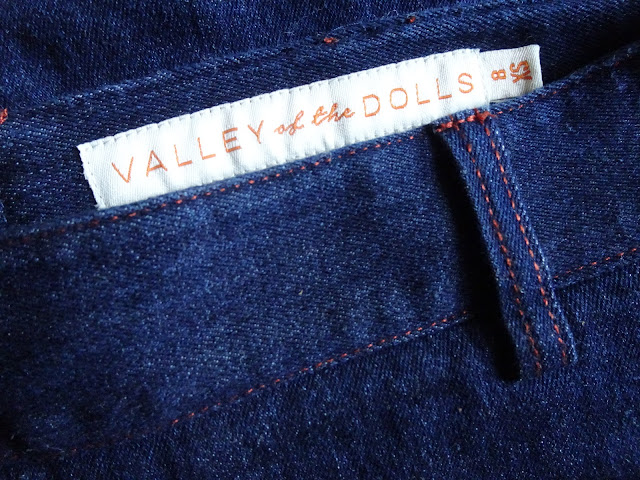 I left the house in a block printed midi skirt but felt the need to try on the skirt as soon as I got back as it reminded me of the one worn by Monique in The Serpent. 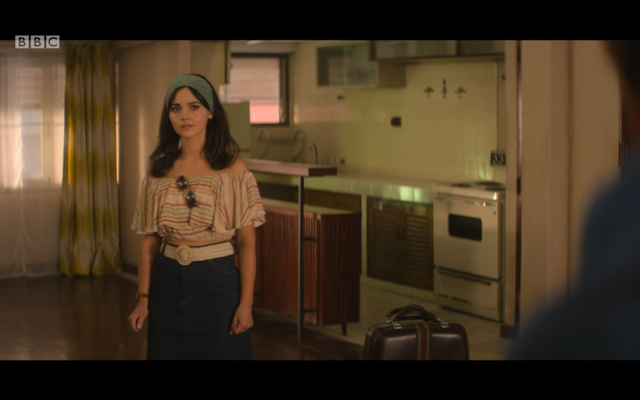 I've not worn a denim skirt in years but there was something rather pleasing about the kick pleats and cleverly positioned pockets and, a massive plus point, belt loops large enough to accommodate a wide leather belt. I don't do skinny ones, go big or go home! 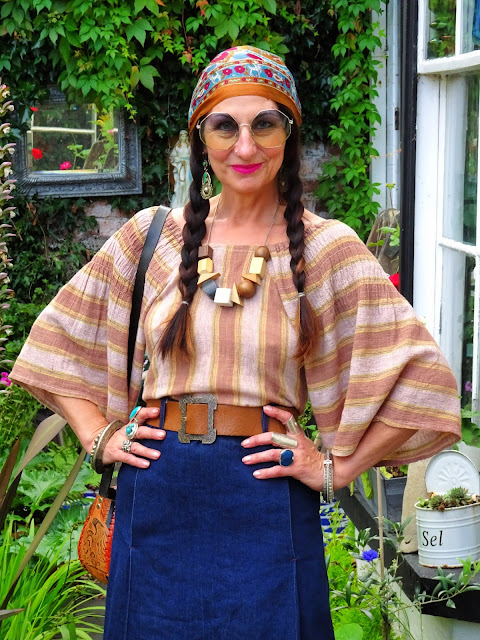 Our Autumn raspberries were having a growth spurt so, after lunch, we moved the arch by the pond to the veg bed opposite the Kinky Shed to support the plants. 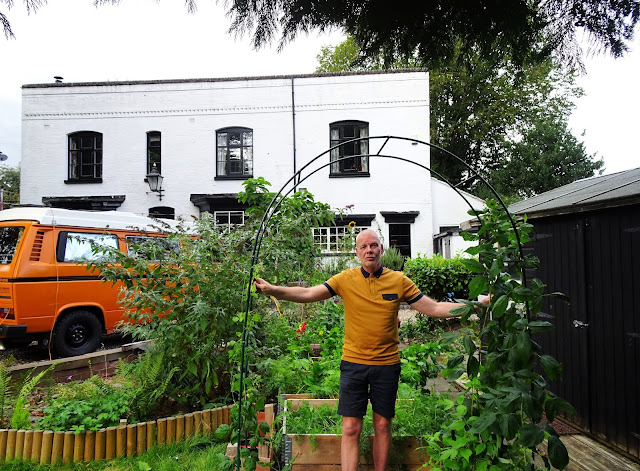 On Monday morning it was business as usual with a Wii Fit session and a couple of loads of washing pegged out in the sunshine before 8am. 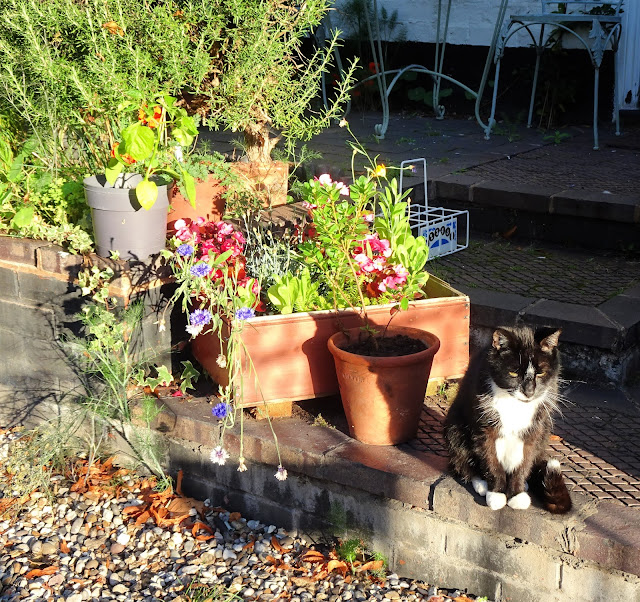 I was keen to give yesterday's chazza-shopped dress a whirl but, to be honest, it wasn't on for long, I was in a bikini by 10.30am watering the parched patio pots and cutting back the red and blackcurrant bushes.

I love living in such an ethnically diverse area, where Indian and African textiles are as commonplace in charity shops as the more mundane high street cast-offs. 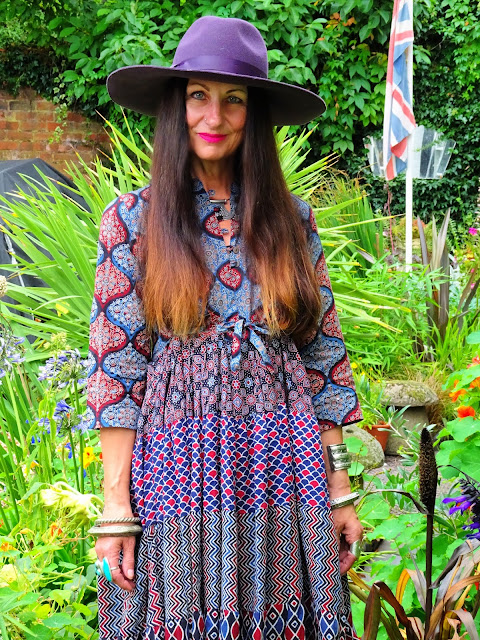 After lunch, I lay on the lawn with my latest read, Reconstruction by one of my favourite authors, Mick Herron. I would have done so earlier but the sun's really low in the sky at this time of year and the grass doesn't get any sun till gone midday. 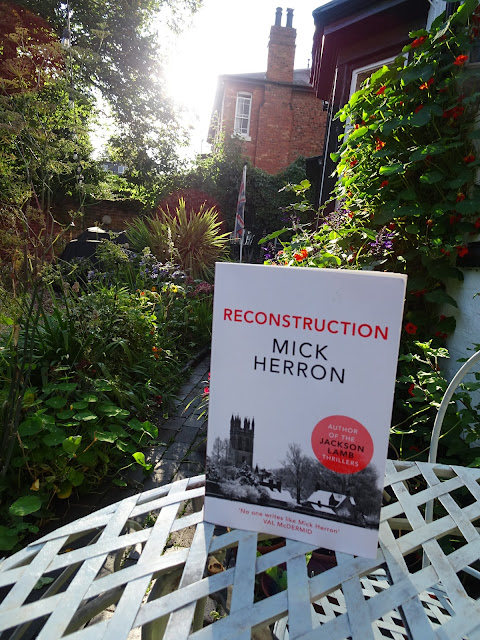 Jon finished his packing, taking out a couple of things. I followed suit, whittling my choice down to six dresses (one of which I'll be flying in), two bikinis, two bags and my straw hat (I'll sort out footwear & jewellery tomorrow). Our combined baggage allowance is for a single 20kg bag and, as we're travelling around, we're trying to pack as lightly as possible. A couple of the towns we're staying in are traffic-free, the last thing we want to be doing is lugging a massive bag up this hill in 32°C heat. (Packing post fans - there's one coming up very soon!) 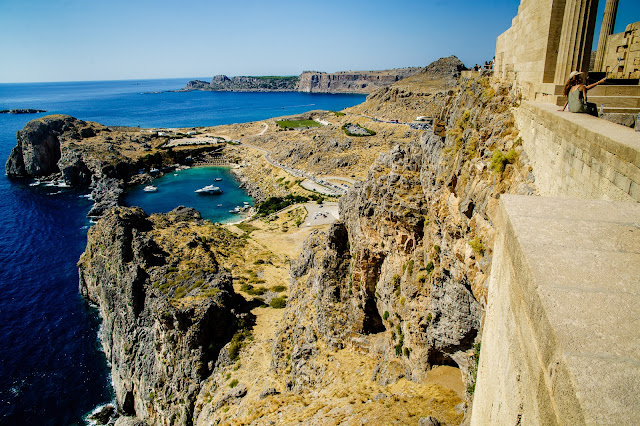 Awww, look at The Lads, fast asleep under the rosemary bush. The dreaded bag is out from under the bed and they know something's afoot! 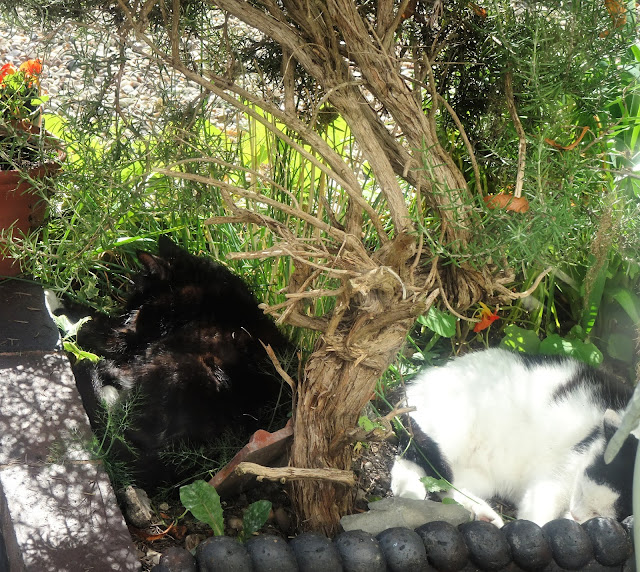 I'm off to drink wine and eat pizza. Later, we'll be watching this afternoon's The Antiques Road Trip on catch-up and Silent Witness.

Email ThisBlogThis!Share to TwitterShare to FacebookShare to Pinterest
Labels: Block Print, Books, Charity Shopping, Gardening, It's All About Me, Jon, Outfit, Pets