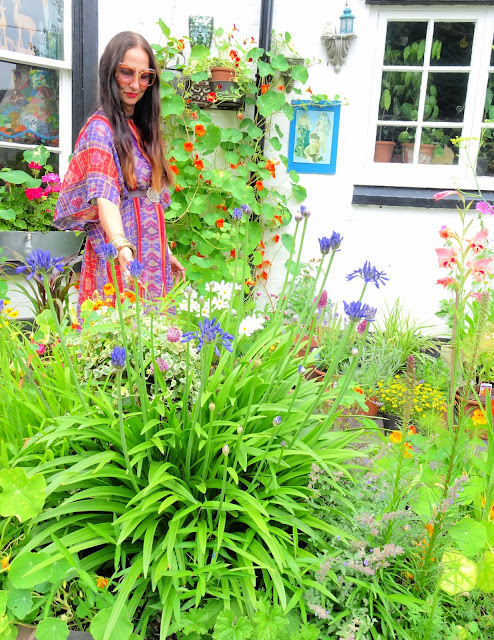 Boo! The glorious heatwave has left us and it's back to the more average 21°C. It's not all bad though, the violent thunderstorms & torrential rain we'd been expecting didn't get as far as the Midlands so we've managed to spend the last three days in the garden. 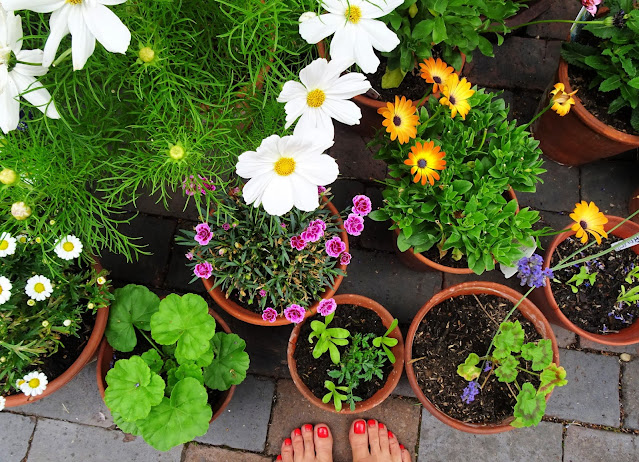 With no National Trust visit this week I thought you might enjoy a trip around Stonecroft's garden instead. 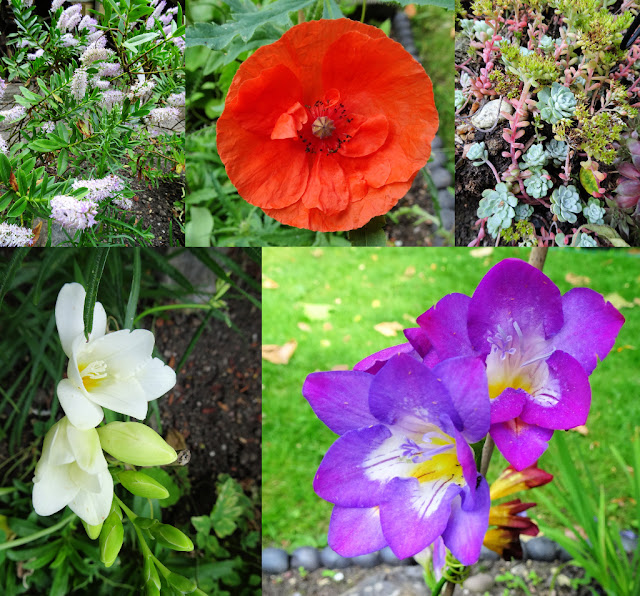 These pretties are to be found in the bed below, formerly a weed-strewn patch beneath our only surviving apple tree. When we had a blast of hot weather back in March I decided to dig it over, edge it with some of our never-ending stash of Edwardian pavers, move plants from elsewhere in the garden, plant a few bee-friendly bulbs from Wilko and add a liberal sprinkling of seeds filched from our travels. 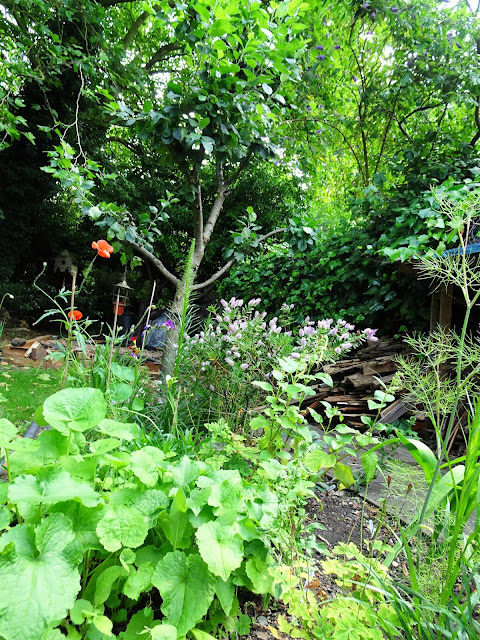 The ferns have gone absolutely crazy after we'd split them earlier in the year. We'll be doing it again in the Autumn, moving them further into the woodland at the bottom of the garden. 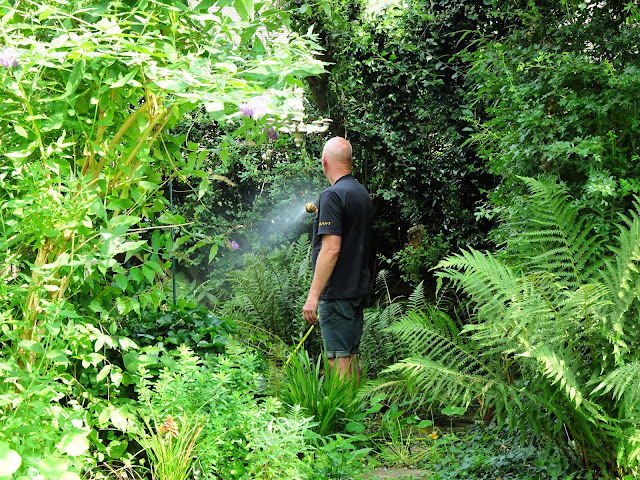 Lynn's Auntie Gladys's sunflowers are blooming and delighting everyone who visits. The kniphofia is a new addition, bought on Wednesday's trip to the garden centre. We grew them in our previous house, a mid-Victorian terrace with a long and narrow walled garden that backed onto the railway line. The garden was wild and neglected when I moved in, back in 1999 (Jon had lived there for years) and I gradually transformed it, waiting until he was working away to do the heavy-duty stuff like demolishing derelict outbuildings and uncovering overgrown and long-forgotten paths.

After years of renting, I bought my first house in 1991, a year before I met Jon. As a single woman at the height of the property boom, all I could afford was a 1980s house on a shared ownership scheme. The garden was a typical modern one, a rectangle of grass with a slabbed path down the centre and a narrow bed that ran beneath the boring wooden fence. I got rid of the slabs, painted the fence aubergine and dug up most of the lawn, creating wavy-edged flowerbeds I filled with plants I dug up from friends' gardens and I'd liberated from the waste ground opposite the house.  I grew tomatoes in old shopping bags and sunflowers in pots I'd found dumped by a neighbour's bin. The house was built on the site of a Victorian buckle factory and I'd forever be digging up rusting buckles. 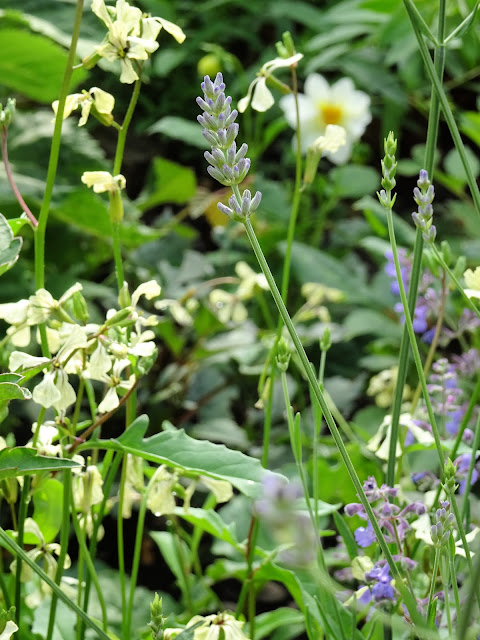 Never mind all this whinging about losing our freedom, the lockdown has given us plenty of freedom - not one but two summers to spend at home, working on our poor neglected garden which, after months on the road, was the last thing we used to feel like tackling. 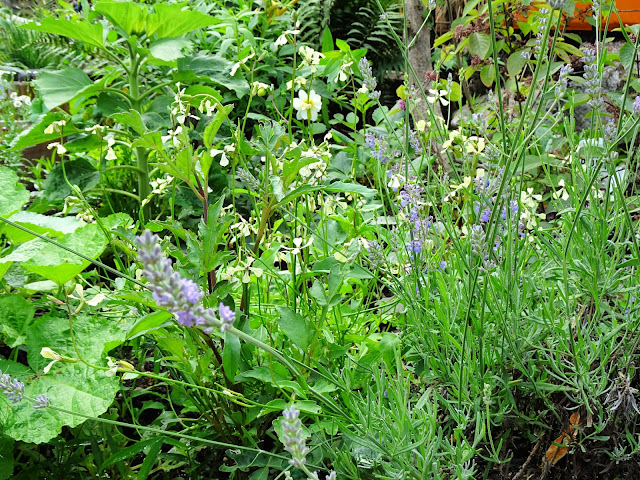 This time last year this bed with nothing but bamboo and brambles. I've planted it with all manner of stuff, dahlias and sunflowers I've grown from seed, perennials rescued from clearance corners, stuff we've filled our pockets with on walks and edibles like rhubarb, gooseberries and rocket. It's chaotic, busy and a bit haphazard and I absolutely love seeing what pops up on a near-daily basis. 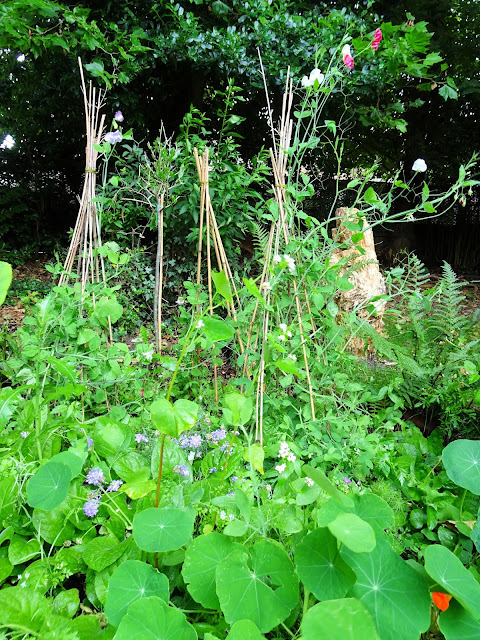 The bed of wildflower seeds grown from that packet of seeds we found suspended from a tree in the woods at Attingham is an absolute joy. Our sweet peas grown from seed are finally blooming and our wild wood peas won't be far behind. 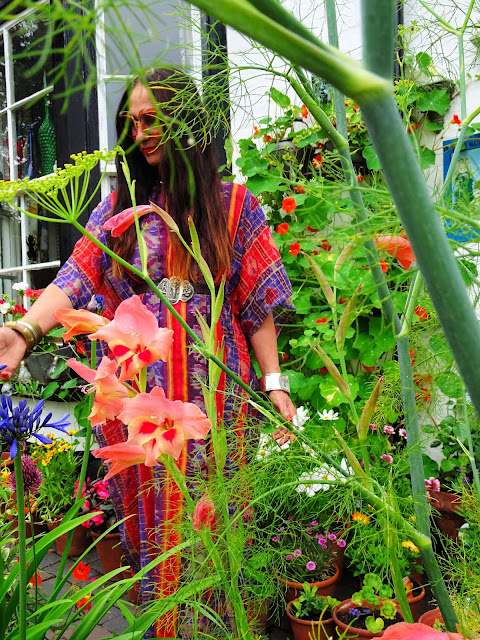 The front door is being replaced soon and due to planning laws, it will look identical to the one already there (minus the rot). 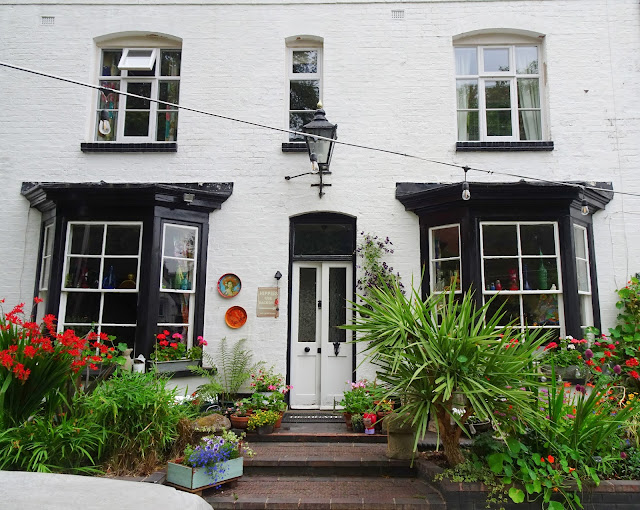 That's Stonecroft by night, the Yukka strung with solar-powered lights from the charity shop. 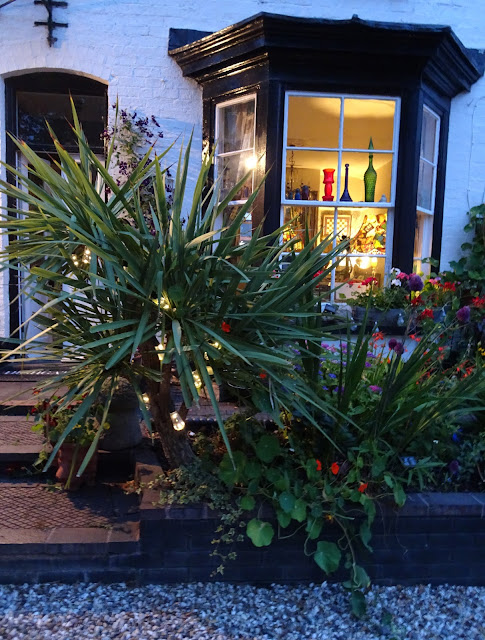 Our Victorian skirting board planter... still intact despite me being a woodwork novice! 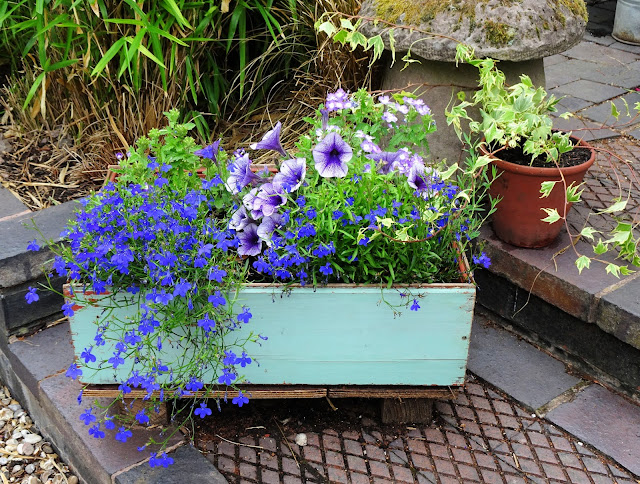 The Empress of India nasturtiums. 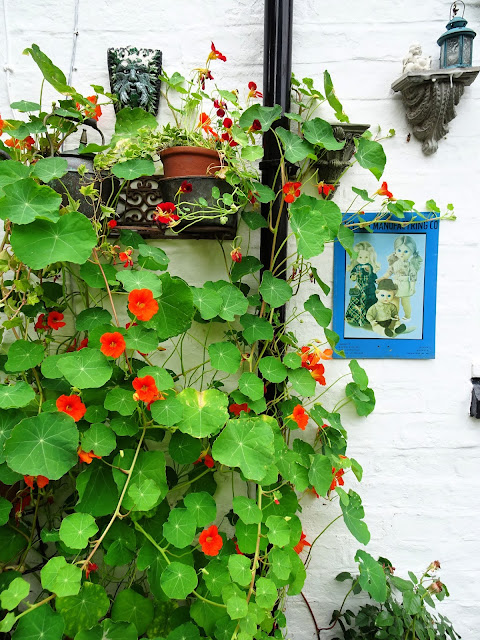 See my headless gnome? He was original to my parental home, a rare survivor of the Arts & Crafts movement. I never found his head, he's got a crown of houseleeks instead! 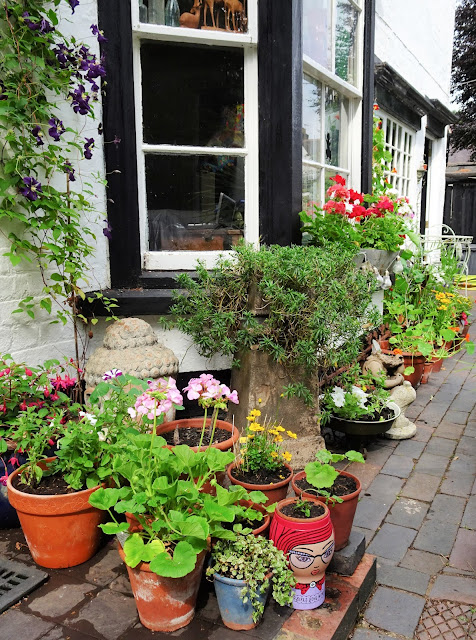 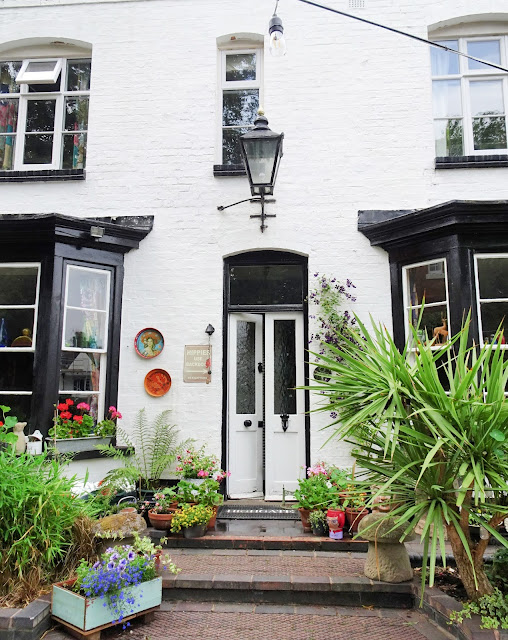 The shrine by night. That's Our Lady of Guadalupe (from the clearance charity shop) illuminated by some solar-powered fairy lights (Wilko). 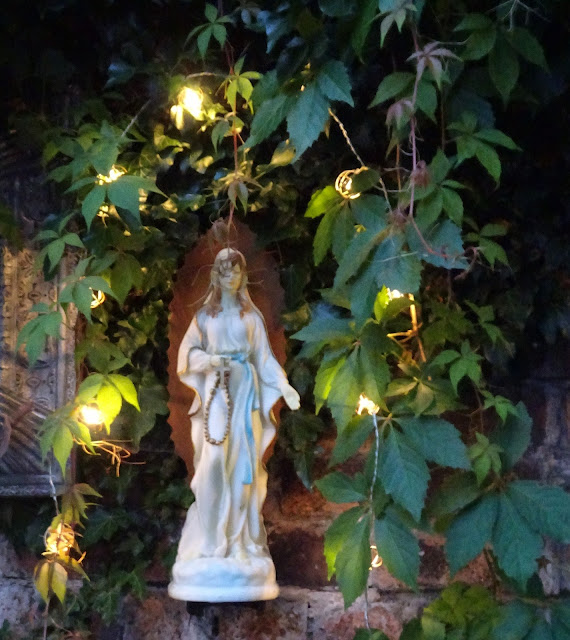 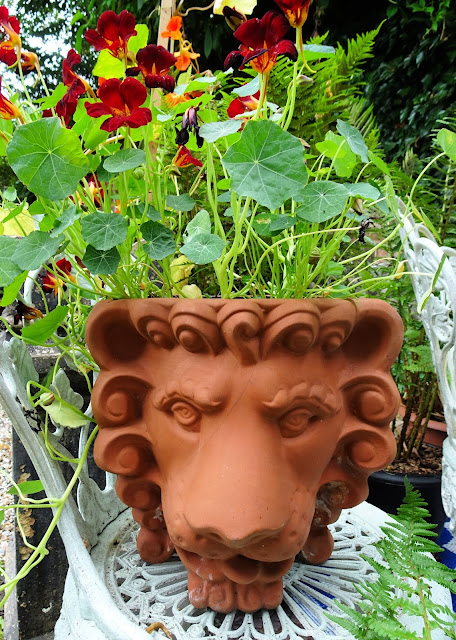 Remember my vintage terracotta lion head planter? We were scared to hang him from a wall so he's sitting on a cast iron chair rescued from a skip. 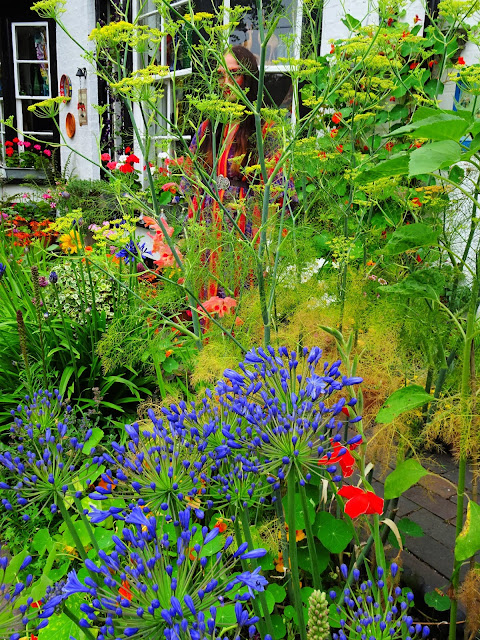 I fell in love with Agapanthus after seeing them in Corfu. I only bought one plant but they've self-set and now I've got three. Visitors often stand gaping at them, they really are the most gorgeous things. The fennel grows like a weed but the hoverflies absolutely love it. 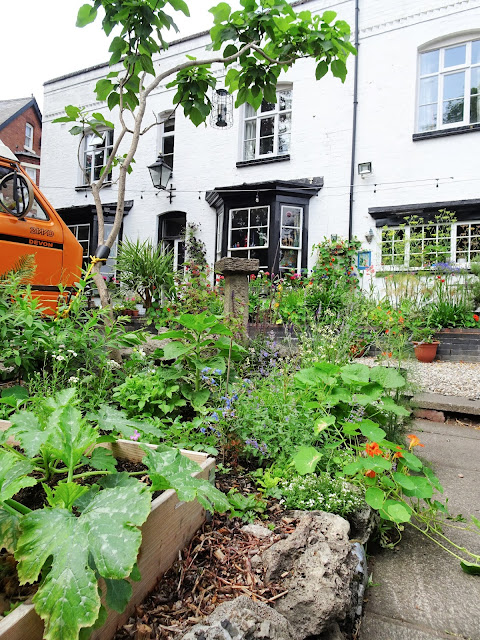 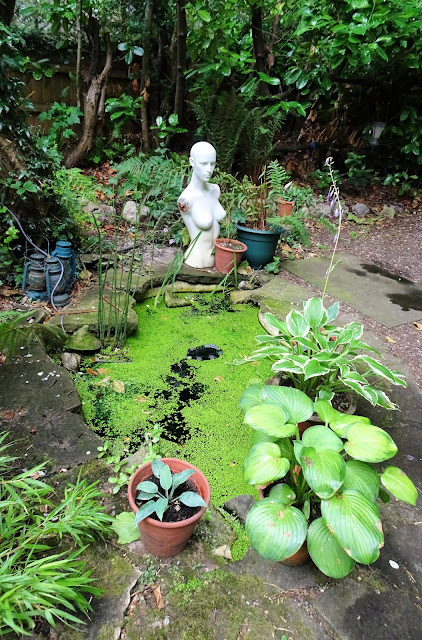 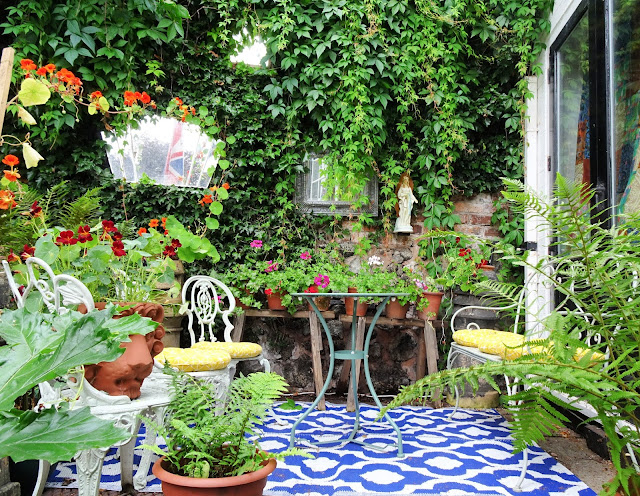 The Wall of Mirrors, gradually becoming obscured by next door's wonderful Virginia Creeper. 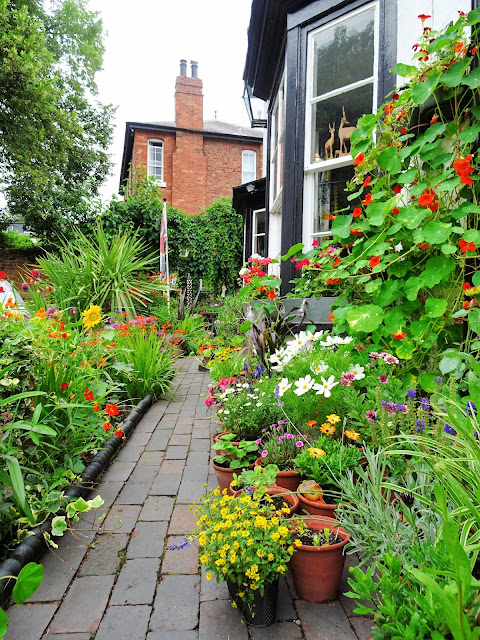 The Staffordshire blue bricks are made of the local red clay, Etruria Marl. Brickworks were a key industry throughout the Black Country across the 19th and 20th Centuries and were considered so important that they were designated as a reserved occupation during the wars. 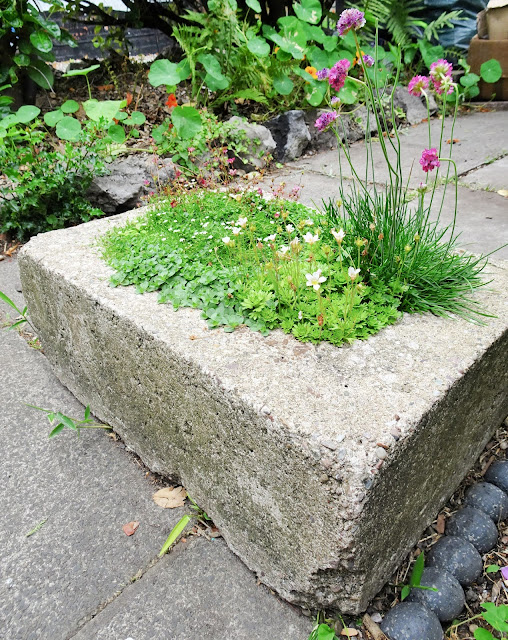 Our Alpines are loving the little stone trough we found in the undergrowth.

I had the genius idea of filling the bare patch of the wall outside the front door with some old trays. I love vintage Corona advertising (and the beer!) The wonderful 1960s Mucha Worcesterware tray came from a jumble sale sometime in the last century. 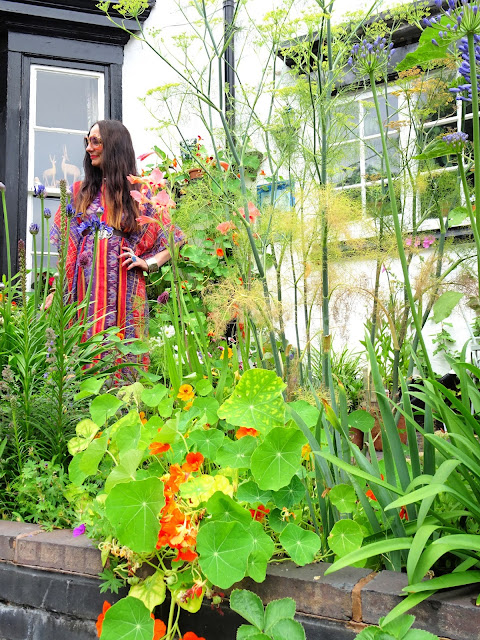 It feels a bit strange wearing clothes (a 1960s Indian-made Ikat kaftan from Harrods via eBay) after three days in nothing but a bikini and a liberal application of factor 30. I've heard a rumour that the heatwave might be coming back in a fortnight, I shall keep everything crossed!