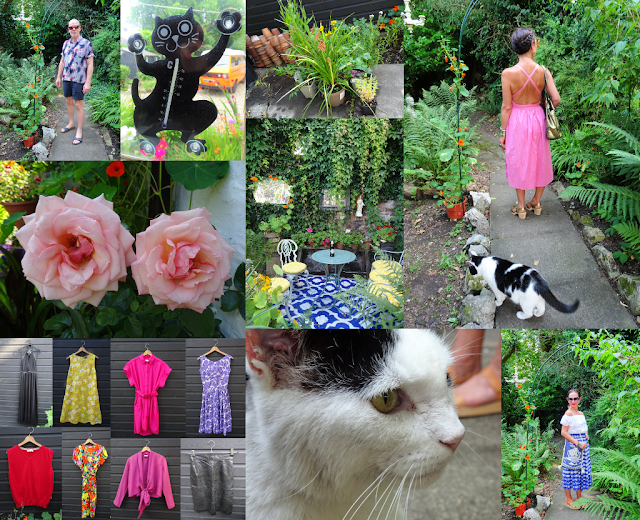 Hello! Thank you so much for the lovely comments on my last Distancing Diaries. I'm not finishing blogging, it's been a part of my life since 2009, it's only the title of my posts that have changed now that social distancing is no longer mandatory in England besides, as festival traders, there's no chance of our lives returning to normal until at least 2022.

This week has mainly been about bikinis and basking in the sunshine. Our glorious heatwave continues and I'm loving every minute, temperatures creeping into the low 30s by the day and not falling below 20°C at night (now officially called tropical nights). The Met Office have even declared their first-ever Amber warning for extreme heat. Needless to say, social media has been filled with people moaning about it being too hot (funnily enough, the same ones who whine about rain and cold the rest of the year) so I've been exercising some social distancing of my own and avoiding the negative nellies. 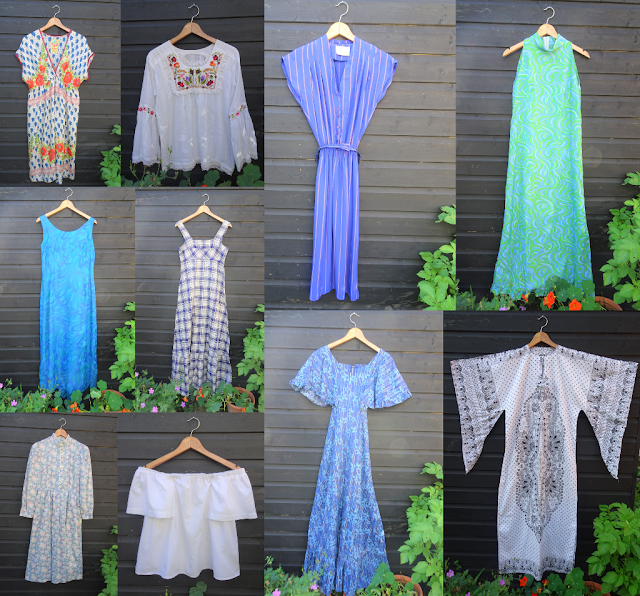 My theme for my eBay listings on Monday morning was blue & white, the colours of the Greek flag which work perfectly on a dazzlingly bright & gloriously sunny day. I was out photographing stock before 7.30am, just after my first workout of the week. Grown-up stuff of the way, I spent the rest of the day on the lawn where Jon joined me after the post office and supermarket run. Monday may have been Freedom Day but he returned to report that almost everyone was still wearing masks and the tiny minority not doing so, had them dangling from their ears and chins just in case.

The lads spent the day slumped in the shade and the heat was so intense that that glue holding my book together melted, a phenomenon I usually only experience in the tropical heat of India (another reason for owning an Ereader). It's a shame as I won't be able to donate The Music of the Spheres back to the charity shop, it'll end its days in the recycling bin. 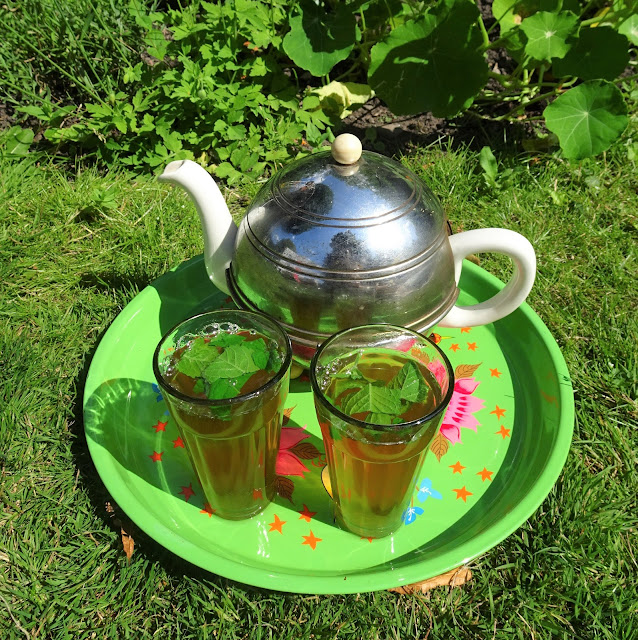 Continuing with my experiments with the contents of my herb bed, I made jasmine tea infused with the grapefruit mint we'd bought from Hidcote. After watering the garden we attempted to follow BoJo's press conference but ended up cracking open a beer and sitting in the garden instead.

On Tuesday morning, with two days to go before the fortnightly collection day, the stench coming from the grey wheelie bin made my eyes water.  I opened it up, tipped out the bagged rubbish and found it was alive with writhing maggots. I double bagged the contents and blitzed the maggots with bicarb of soda and the hosepipe. I blame the leftover chicken Madras Jon made for him and Tony when England played Italy. 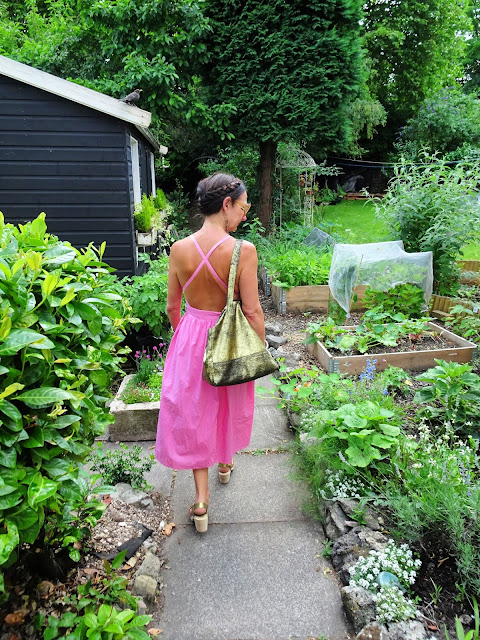 Jon suggested we drive over to our favourite charity shopping town for a bit of a rummage. Before we left I experimented with my plaits, devising a new way of wearing them which eliminated the visible parting at the back of my head. At 31°C it was the perfect day for the vintage Adini sundress, kind blog reader Helena had sent me. I added my gold Lottas, the metallic leather tote bag, some vintage sunglasses and a stack of brass & silver jewellery. 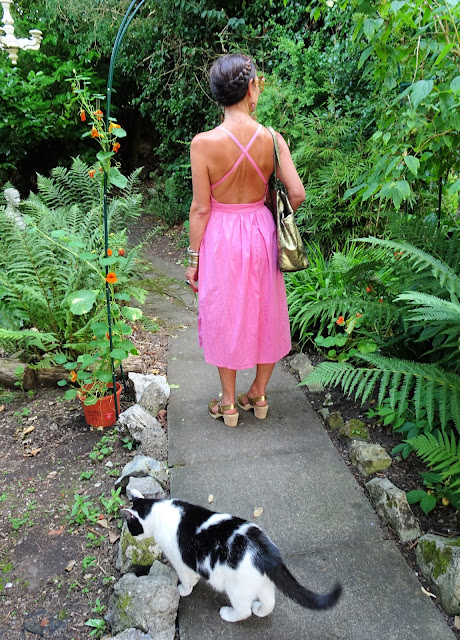 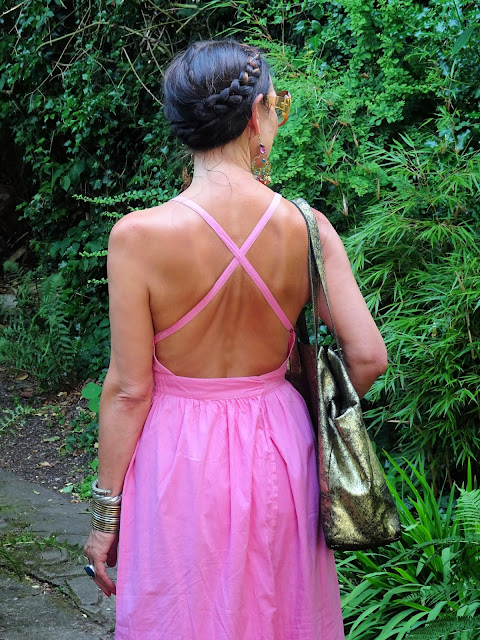 Just as Jon had reported yesterday, almost everyone wore masks (including us), used the hand sanitiser available at the charity shop entrances and observed social distancing. 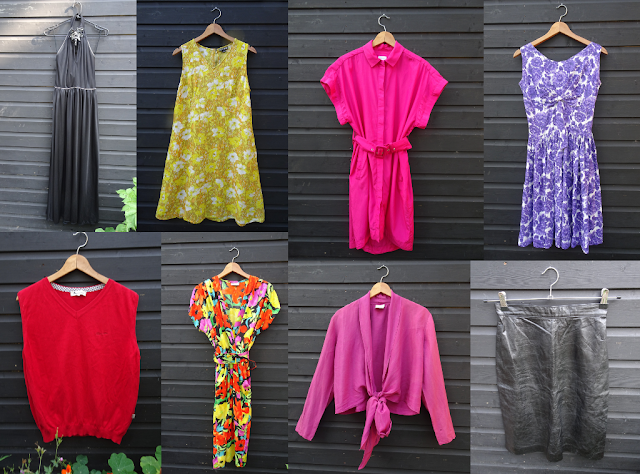 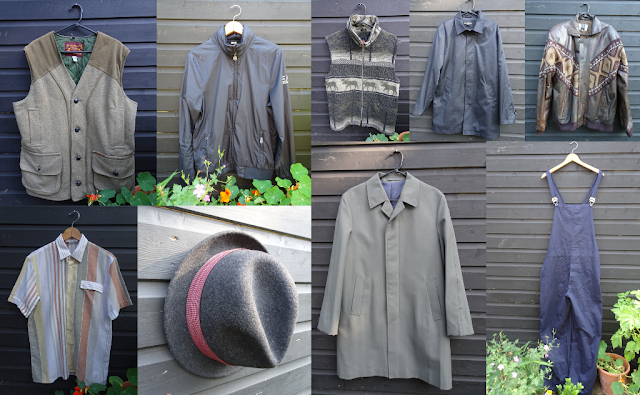 For us - a canvas jacket by Indian streetwear label, Breakbounce; a cat thermometer (measuring 21°C at 5.30am); Astray by Emma Donoghue (if it's half as good as Home, it'll be a cracking read); a 1970s canvas bag and something I've been after for ages, a little straw shoulder bag - I've seen modern-day high street versions appearing in the charity shops but this is the real vintage deal with an intricately woven fastening (not a cheap clasp) and a proper leather strap...I love it! 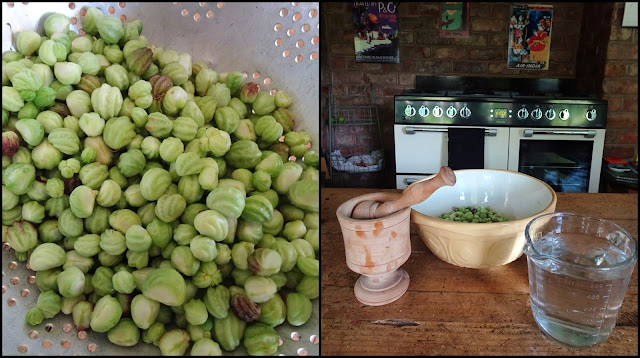 After our haul had been detagged, washed (or spot-cleaned) and pegged out on the line, we followed them out into the garden. The afternoon's refreshment was black tea with bergamot and some fresh lemon balm. I gathered some of the nasturtium seed pods and left them to soak overnight in sea salt and water ready to turn into Poor Man's Capers then spent the rest of the day basking in the heat.

Record-breaking temperatures call for intense watering although we're doing our best to keep it to a minimum as, no doubt, there'll be a hosepipe ban if the weather continues. The Crocosmia and Agapathas are almost all out now and after a disappointing 2020, the clematis is looking spectacular.

After a salad, we sat outside with the lads drinking tea. We'd watched a couple more episodes of Baptiste the previous evening and watched another later, two more to go. It was 24°C at 11pm. Did we have a sweaty, restless night? No. Do we own a fan? No! Air conditioning? Unheard of in most British homes (especially 270-year-old ones like ours!) We simply do like they do in Greece, keep the upstairs curtains and windows closed during the day. We sleep with 100% cotton sheets & pillowcases with a cotton bedcover thrown over the top and a cat snuggled up on either side of us and sleep like babies! 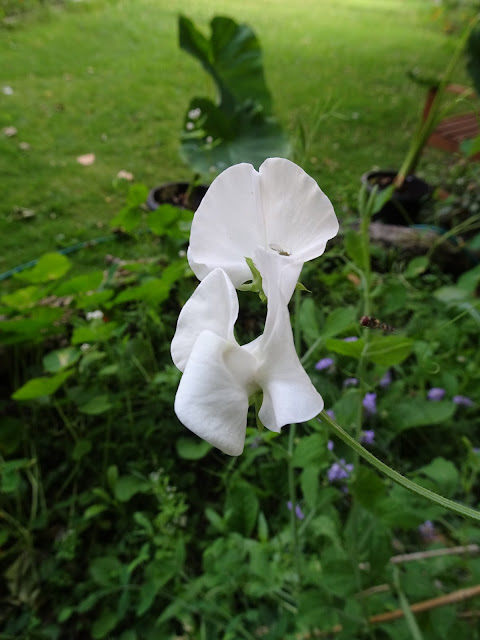 This morning I was up at just gone 6am and does it sound dreadful to say that I was already looking forward to my Wednesday night rum & coke? I might be a yoga practising, life-long vegetarian but I never claimed to be clean-living! After discovering that our sweet peas were finally starting to flower, I ironed the dresses I'd bought & washed the previous day, photographing & listed them on eBay following my Wii Fit workout. After breakfast, we drove to the local garden centre as we were in need of compost and, inevitably, ended up buying a few plants. Our garden centre used to be very old-fashioned but it's finally joined the great gardening revolution, selling British wildflowers, some fantastic perennials in peat-free compost and all manner of interesting herbs. Although we didn't wear masks outdoors we wore them to go inside and pay, the staff were all in masks as were the customers. 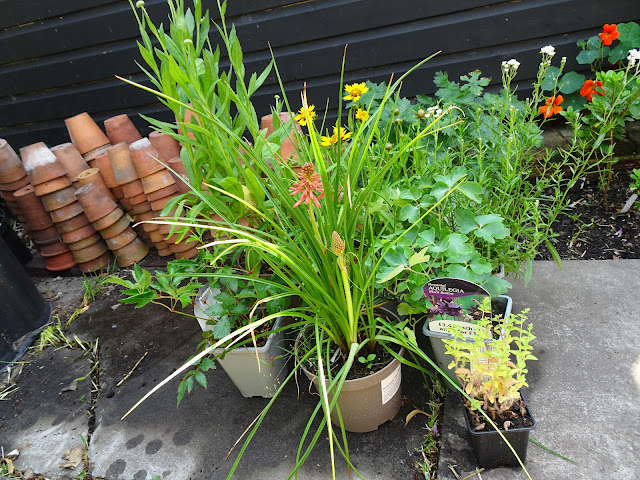 Jon bought this 1980s shirt from a charity shop earlier this year, I wasn't sure when he picked it out but I love it on him! 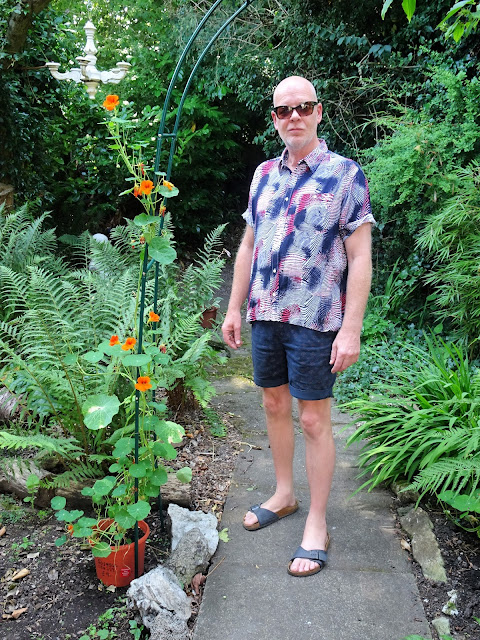 The weather makes me feel like I'm in Greece (minus the beautiful sunsets, hidden beaches, glorious ruins, bouzouki music, amazing food, raki, £4.50 a carafe wine and the wonderfully welcoming people) so out came the skirt I always take away with me, bought new from a proper shop four years ago. The Broderie Anglaise top came from the clearance chazza a couple of weeks ago and the vintage tourist bag was also a charity shop find. 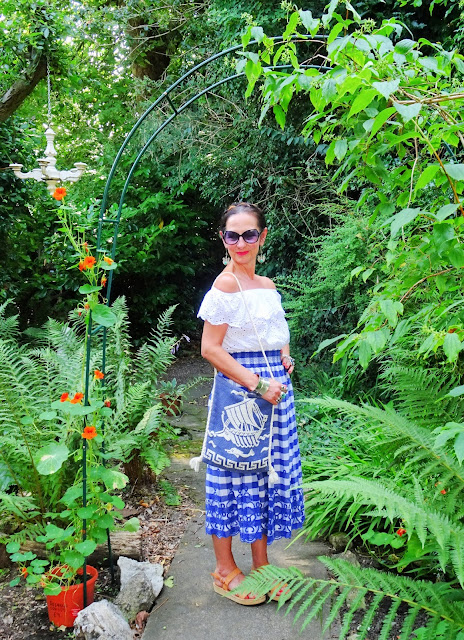 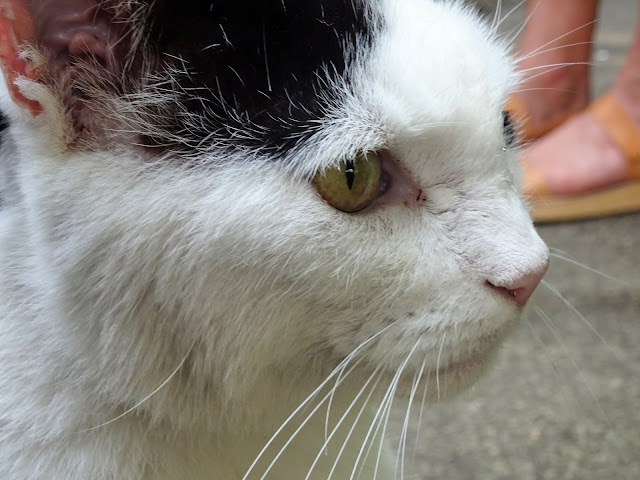 I couldn't resist another pair of Ancient Greek wood & leather sandals from that eBay seller who is my body & foot double. I love the wing-shaped buckle, inspired by Mercury (that's the Greek messenger god as opposed to the lead singer of that vastly overrated band). I can understand why they retail at upwards of £145, they're the best things ever.

I was just watering the new plants when our mate Kev popped round, we had a wander around the garden and a catch-up before waving him off and having lunch (noodles, what else?) We stripped down to our sunbathing gear and spent the rest of the day in the garden. Jon broke some rocks in the hot sun, like a crazy man and I did some weeding and nasturtium pulling, they're taking over! 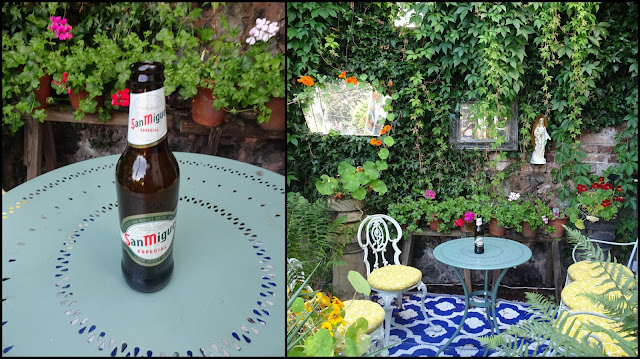 We drank rose tea with black peppermint and read in the sunshine. Jon went off to start tea (halloumi with roasted veg) leaving me to finish the watering and cobble together a blog post. He's just handed me an ice-cold San Miguel so I'm going back outside to drink it.

Email ThisBlogThis!Share to TwitterShare to FacebookShare to Pinterest
Labels: Charity Shopping, ebay, Gardening, It's All About Me, Jon, Kinky Melon, Out and About