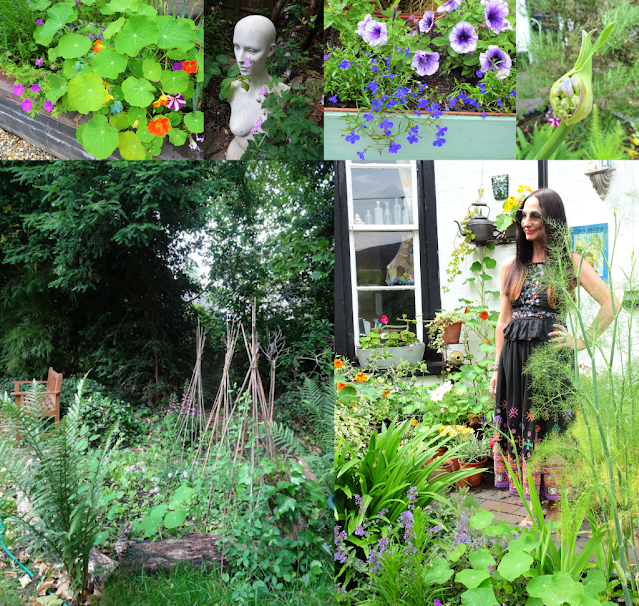 I awoke on Monday to rain, grey skies and gloom, in short, a typical British Summer's day. I braved the wet to gather a few strawberries, did my WII Fit workout and put away the previous day's washing. After breakfast, Jon went shopping and, as the new-to-us range was arriving later, I set to work on cleaning our cooker. I'm no domestic goddess and a cursory wipe-over has done the trick over the years but as it's in good working order it needs to be in tip-top condition before it goes to a new home. When Jon got back he disconnected the cooker and we moved it into the middle room. He scrubbed the empty alcove whilst I mopped the floor. 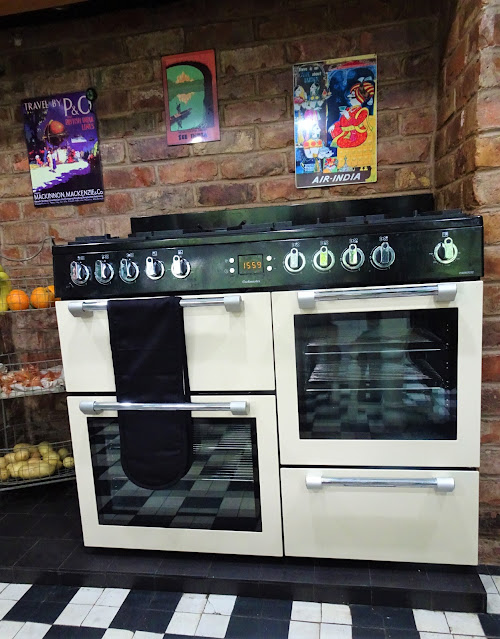 After a sandwich - no gas for noodles - Liz popped round and we caught up with her tales of adventure as she'd just returned from her first solo art exhibition in St Ives. By now the rain had stopped so we had a meander around the garden as she'd not seen it since we'd laid the turf outside the front gates. Whilst we were wandering Jon, the neighbour, his son and a mate manoeuvred the range into place and by the time Liz had left it was plumbed in and working. 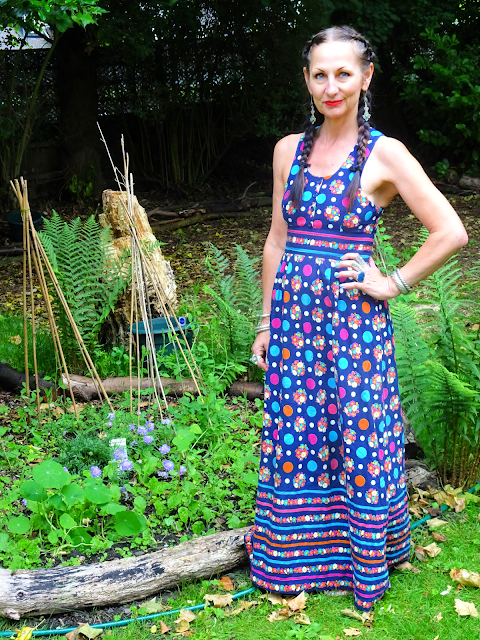 As I'd run out of oven cleaner I had a play in the garden. Do you remember the packet of wildflower seeds we'd found hanging in the forest when we visited Attingham Park last month? 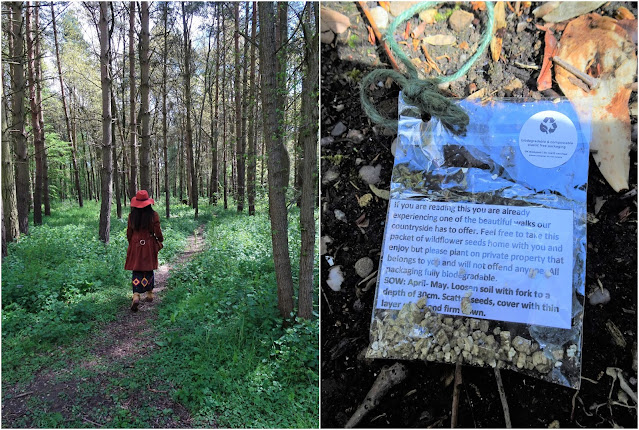 On 8th May, where our garden becomes wild and woody, I'd cleared a space, dug the ground over and scattered my found seeds, planting a newly-acquired scabious in the middle. Jon had made wigwams and planted out the sweet peas we'd grown from seed alongside the hardy native wood peas that have grown wild in the garden for decades. He'd used some of our stash of logs to edge the border. 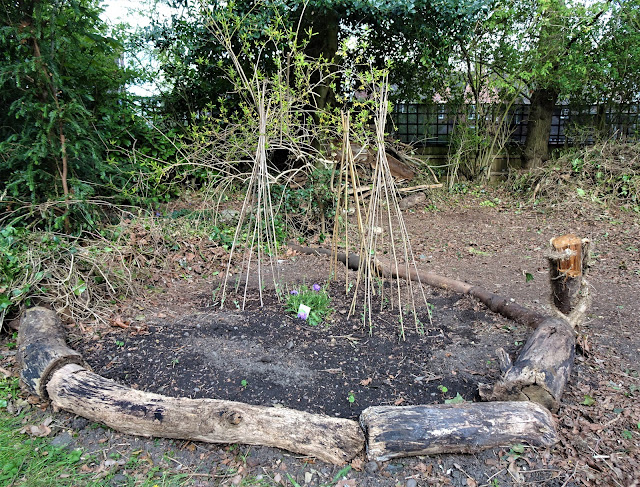 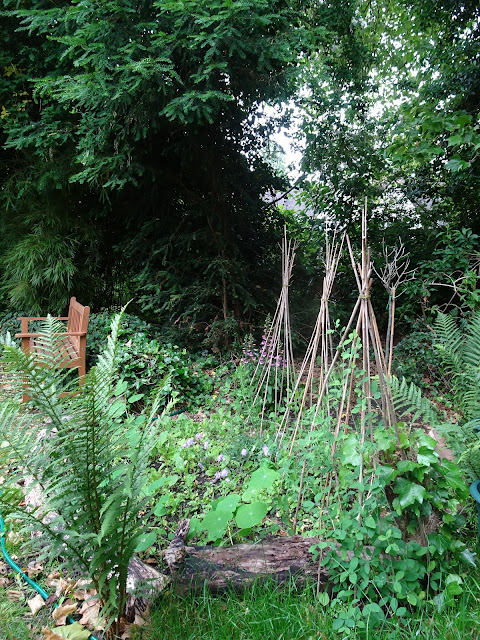 We have the makings of a wildflower corner!

Alongside the still-blooming scabious, the wood peas, Empress of India nasturtiums and the foxglove I'd rescued last week we have cowslips, corn marigolds, lady's bedstraw, great leopard's bane, honeywort and oilseed poppies.

All this rain is causing new things to pop up all the time and it's all rather exciting.

If you're thinking I'm some kind of an expert in identifying British wildflowers - I'm not! To travel I need to show proof of my double jab status so Jon's given me an old mobile phone to access the NHS app. Needless to say, it lives in a drawer, I never take it out with me and haven't even sent a text but I've downloaded a free app called PlantLife with which I can take a photo of what's growing in the garden and it'll tell me what it is. 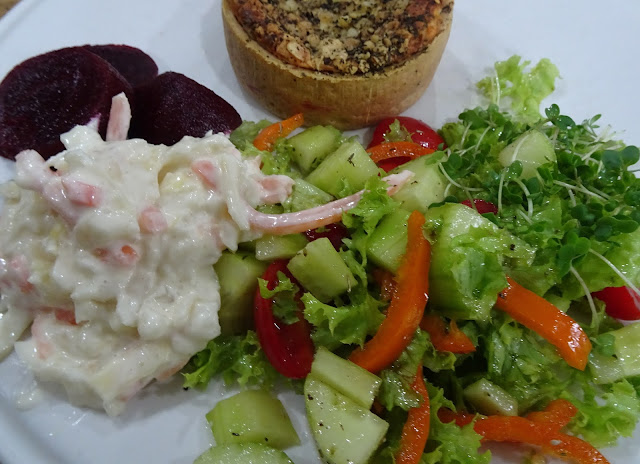 Tea was early - quiche cooked in the new oven and accompanied by a salad - as it was a big night for the Euros, starting with Croatia vs Spain and followed by France vs Austria, six thrilling hours of football. No wonder we call it The Beautiful Game, both matches were incredible and we were emotional wrecks by the time Mbappe missed the last penalty.

On Tuesday I gathered a few strawberries on my early morning wander spotting the first of the geraniums & the imminent arrival of an agapanthus. Afterwards, I did my Wii Fit workout and wrapped my eBay sales parcels ready for Jon to drop off at the post office before he visited Tony, who'd swapped his day off to coincide with England vs Germany game.

After breakfast, to take my mind off the match, I touched up my roots at the kitchen table and dyed my eyelashes. After Jon left I headed outside and spent the morning in the garden. After I'd sorted out the dead leaves on the Yukka I weeded a couple of beds, planted out my artichokes and potted up some red basil and tomato seedlings.

When Jon got back we had noodles for lunch and while he tinkered with Gilbert I watered the garden and basked in the afternoon sunshine. 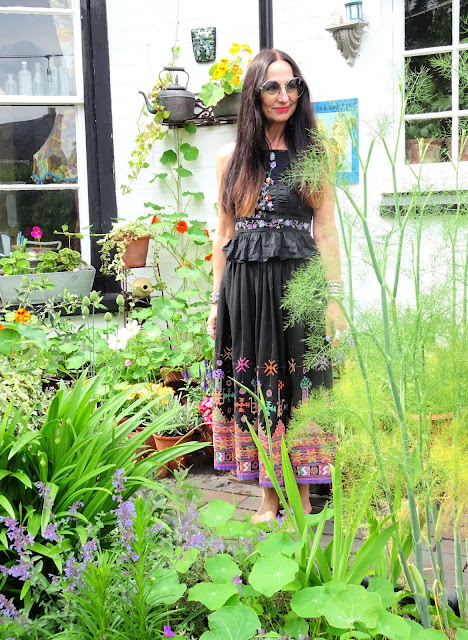 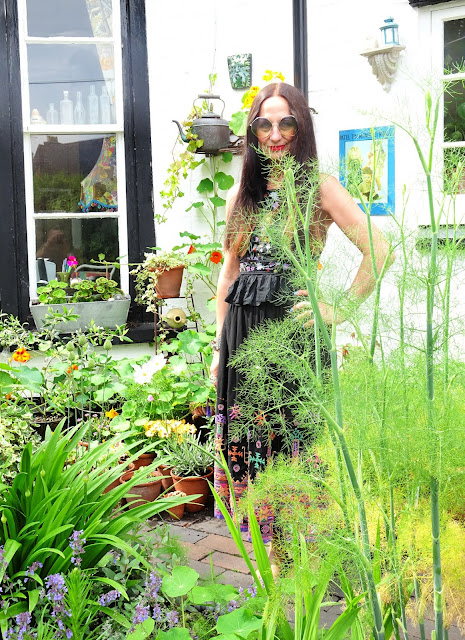 It was the first time I'd worn this embroidered Indian cotton cami I'd snaffled for £1 from the charity clearance shop back in October. I'm loving it with my Anokhi skirt. 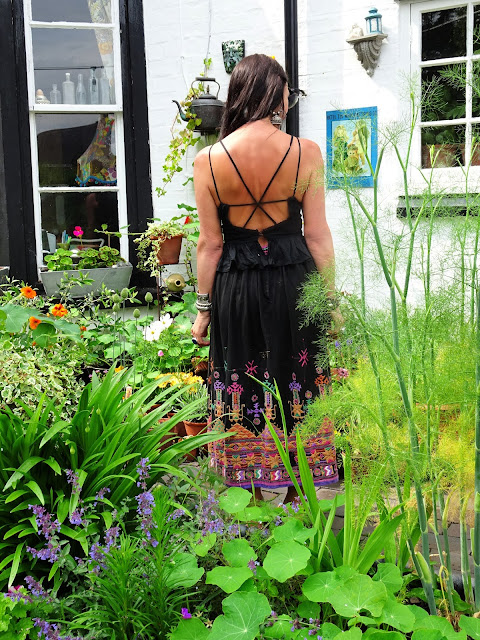 It's been almost 25 years to the day since England lost to Germany on penalties in Euro '96. We were in Tunisia as a terrible terrorist attack in Sri Lanka meant our original travel plans were cancelled. We were the only Brits in a swanky, French-owned hotel in Hammamet and, with no pub culture and no residents at the hotel interested in the England match, we sweet-talked one of the room boys into let us watch the match with them in the staff restroom, which was the size of a broom cupboard. I'd share some photos of our Tunisian adventures but the album is at the back of a spider-infested shed behind two bicycles and a cast iron fireplace (hoarders, us?!)

I'm off to change into my lucky red bikini. I'll leave you with the greatest football song of all time and New Order's only ever number one.

Email ThisBlogThis!Share to TwitterShare to FacebookShare to Pinterest
Labels: Gardening, It's All About Me, Music, Our House, Outfit