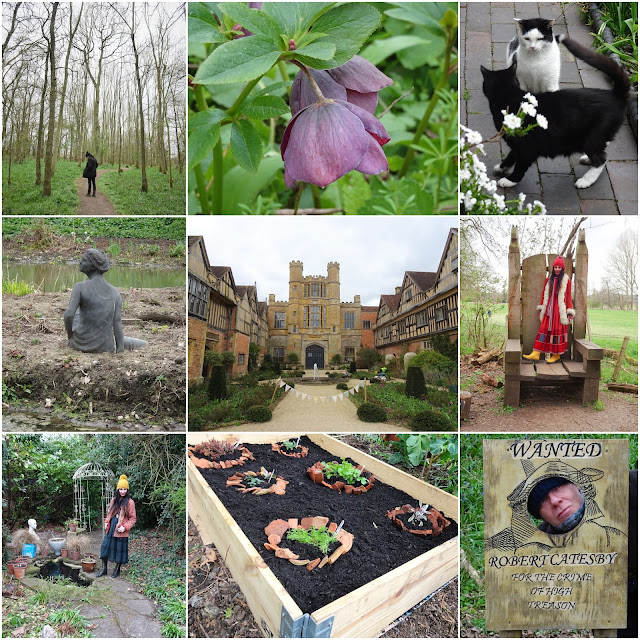 On Wednesday morning, I did my Wii Fit workout, we had breakfast, Jon filled the flask and made sandwiches and after swinging by the post office with our urgent order for the TV costume department we made our way to Coughton Court, the first National Trust property we'd visited since December 2020. 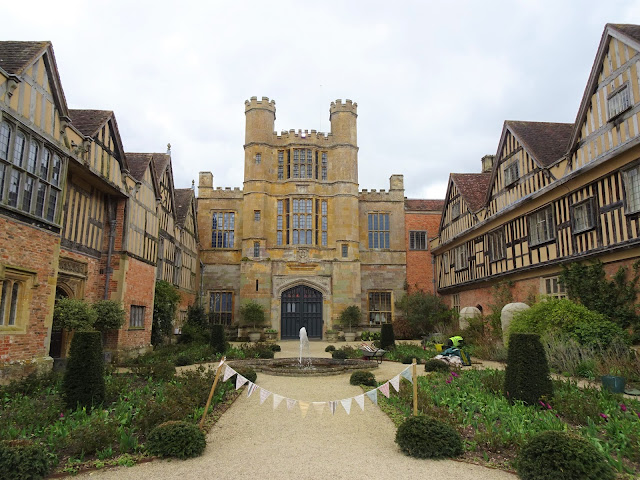 A Tudor country house built around 1536, the Coughton Estate was owned by the Throckmorton family from 1409. The family were practising Catholics during the period when Catholicism was persecuted by English law from the beginning of the reign of Elizabeth I. The hall holds its place in history for the Throckmorton Plot to murder the queen in 1583 and later as the place where the conspirators rode to directly following the failure of the Gunpowder Plot of 1605. 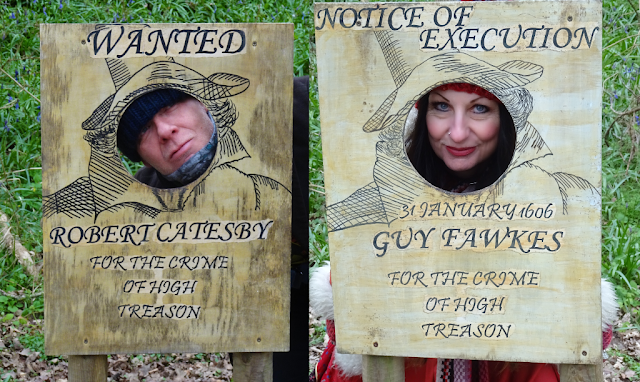 The National Trust has owed Coughton Court since 1946 although the Throckmortons retained the 300-year lease until the last family tenant died in 2017. 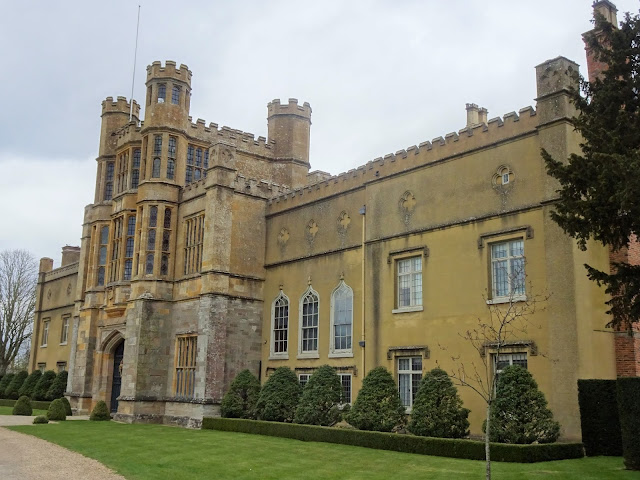 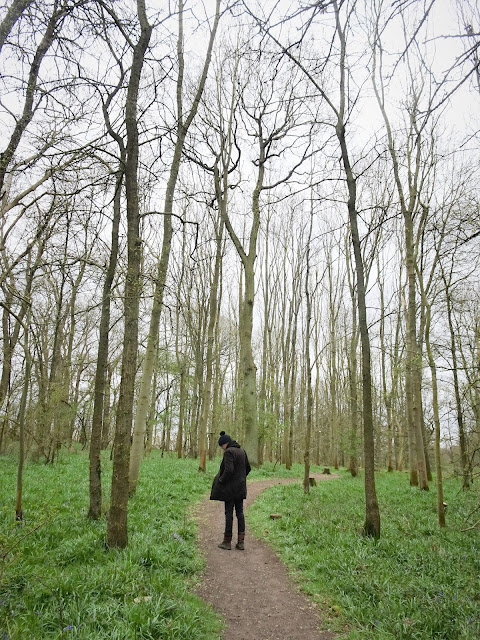 We'd been expecting a bitterly cold day and had dressed accordingly although our faces were raw by the time we'd spent two hours wandering Timm's Grove (which will be a sea of bluebells in a months' time), the orchard, the bog garden and Arden Way. 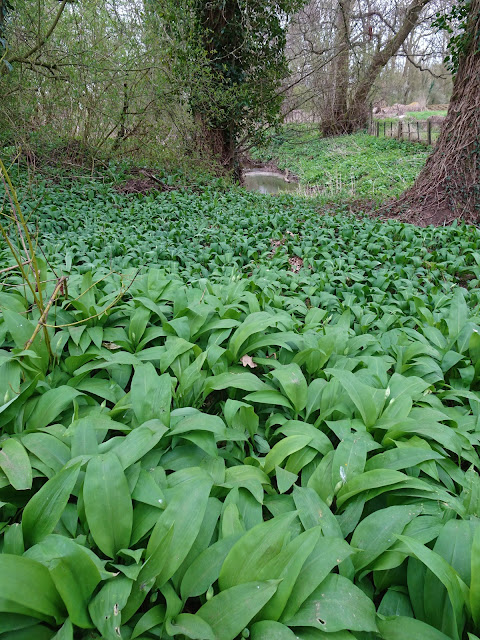 The forest floor was carpeted with wild garlic. 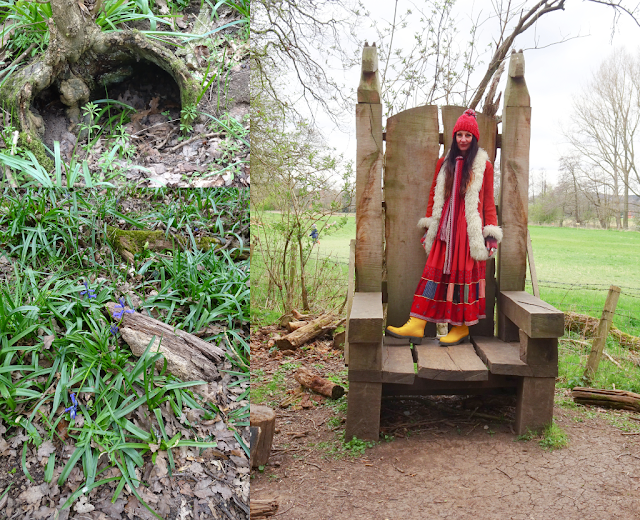 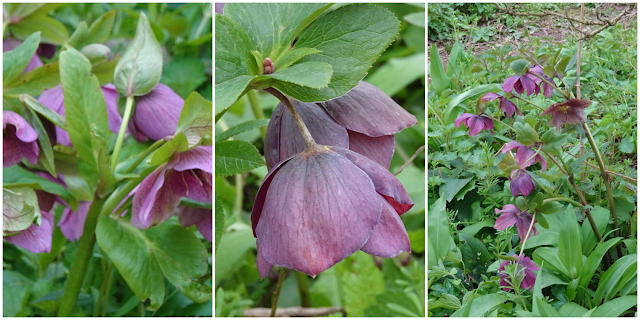 We made a mental note to plant hellebores in Stonecroft's garden next Autumn. 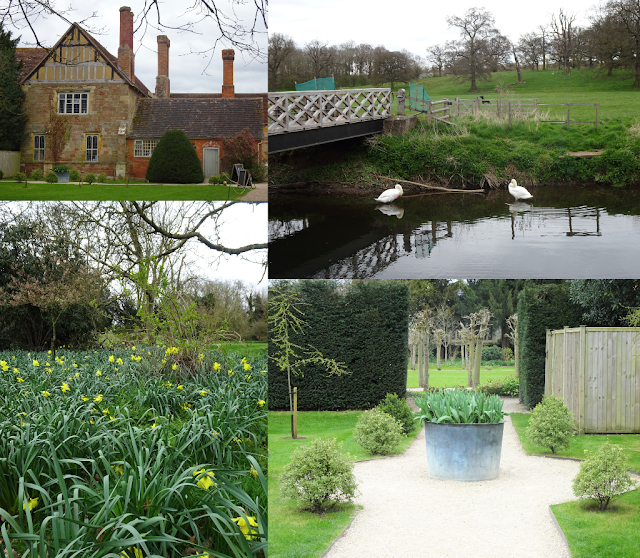 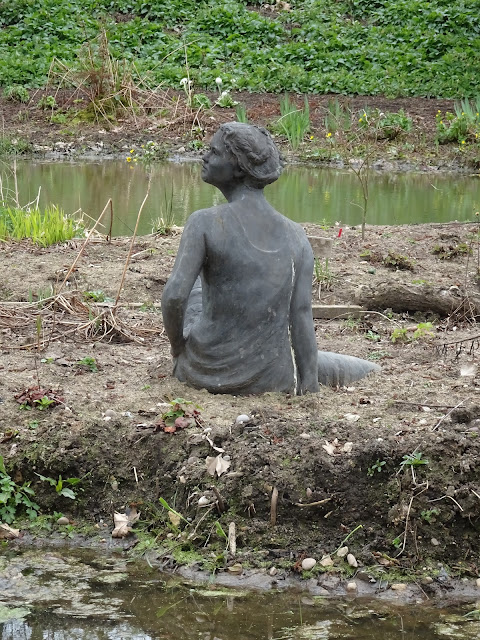 On our last visit to Coughton Court back in July (here) we'd been bowled over by the gloriously overgrown bog garden. It was very different on this visit with the green shoots only just emerging from the mud but still lovely. 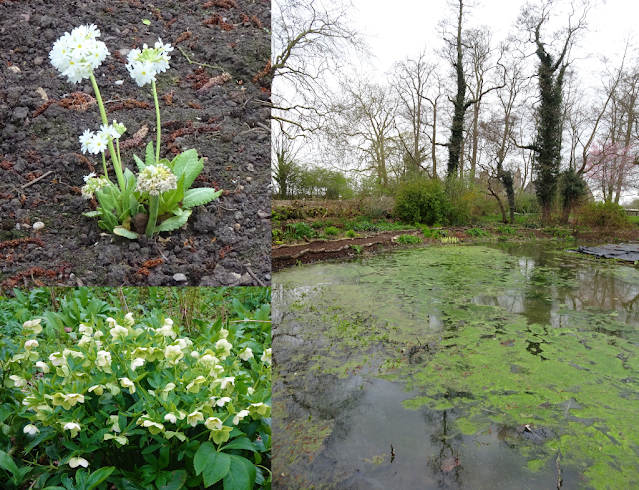 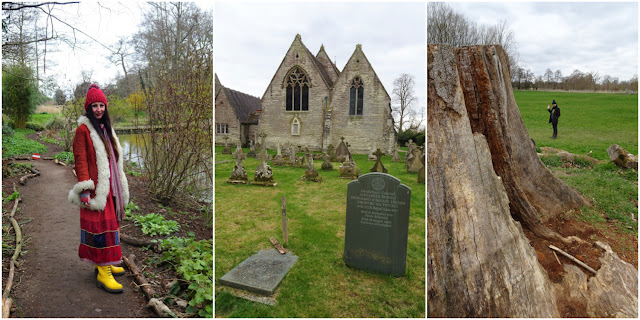 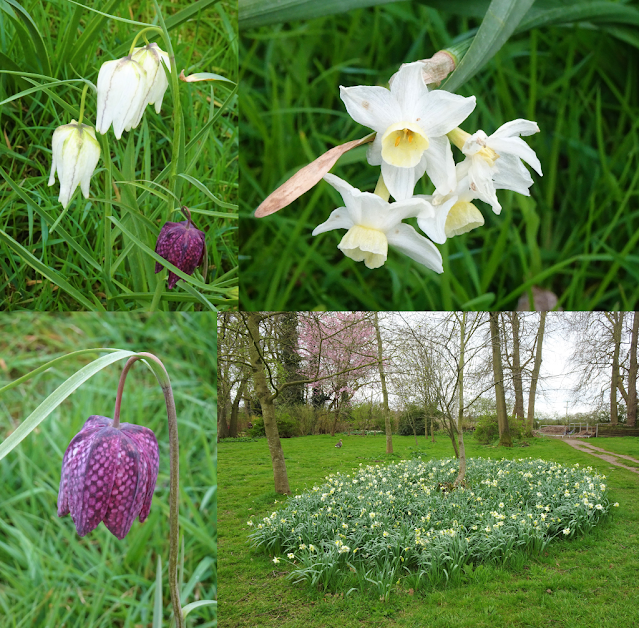 There are over 2000 daffodils in Coughton Court's gardens and absolutely loads of my favourite Spring flowers, Snake's Head Fritillaries. 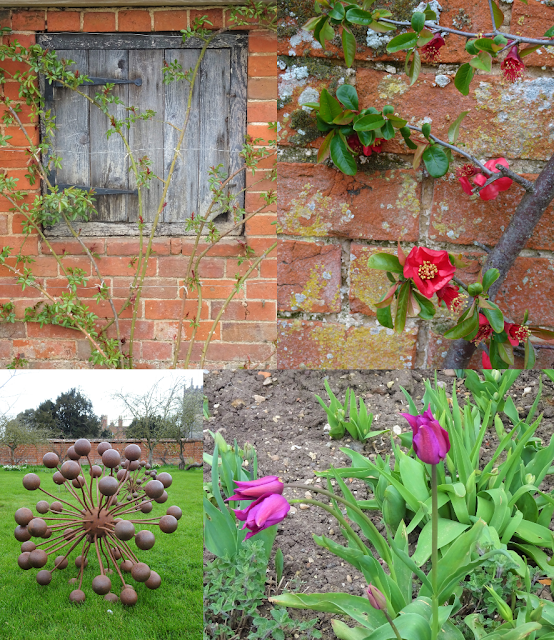 The sculpture in the orchard looks worrying similar to the Coronavirus. 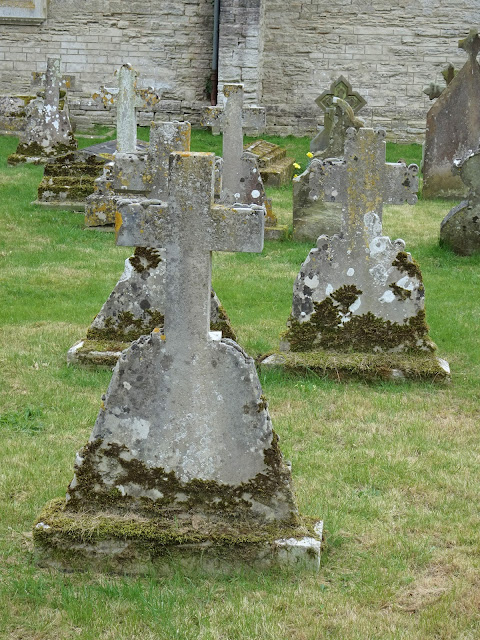 Once we got back to the van we were pleased that we'd opted for the shorter walk rather than the seven and a half mile alternative and defrosted our nearly-numb fingers on mugs of tea. We ate our sandwiches accompanied by 6Music and made our way back to Walsall. 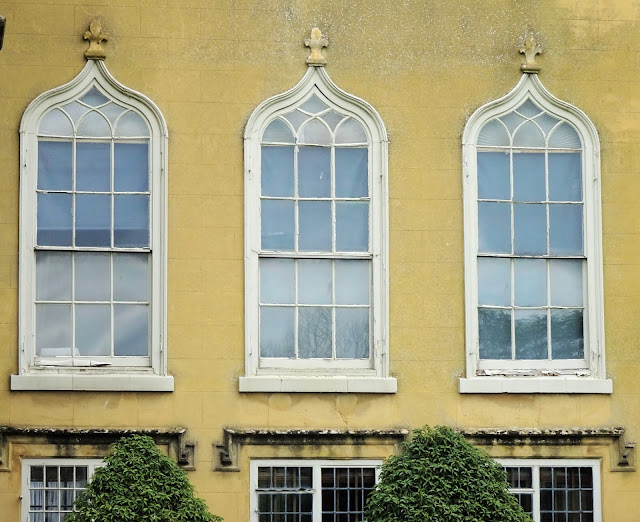 We'd had more than enough of the cold to contemplate any gardening so, armed with a mug of tea I left Jon removing the poor man's double glazing from the windows and cracked on with the family trees. 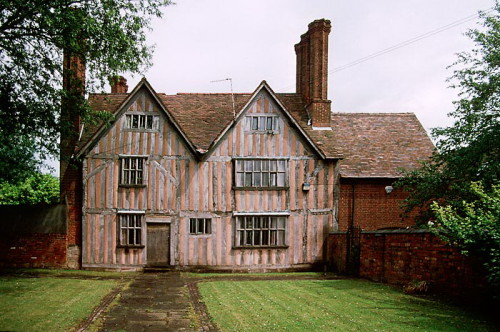 This is Bell's Farm in Kings Norton in Birmingham, home to the Field (also known as Fielde or Ffield) family, the head of the household being William (1605 - 1643), listed as a yeoman (a man holding and cultivating a small estate) and Jon's 8 x Great-Uncle. William was loyal to the King during the English Civil War but his son, Edward (1623 - 1686), took Cromwell's side. In 1643, Prince Rupert, Charles I's nephew, arrived in Birmingham to recapture it from the hands of Cromwell and free the city's artisans from being forced into manufacturing guns for the opposition. With his 2000 men, he almost razed the city to the ground causing Cromwell's New Model Army to flee to nearby Kings Norton. Bell's Hall was handed over to Edward and William was taken to the woods and executed. His body was never found. Bell's Farm was restored in 1988 and won The Sunday Times "Country House of the Year" award. (Source) 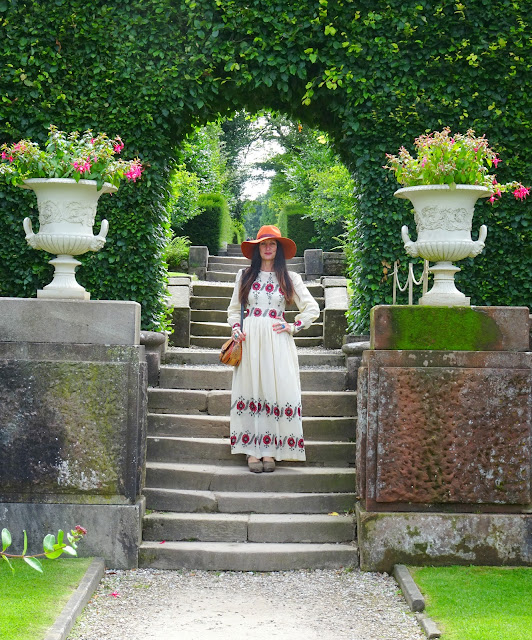 This wasn't my only discovery. I was rendered nearly speechless as I continued my research. It turns out that my 12 x great-grandfather, Richard Edge (1512 - 1592) was the owner of Knypersley Hall in Biddulph in Staffordshire which was eventually sold to the noted horticulturalist, Richard Bateman, in 1809. He lived here until he bought the neighbouring property of Biddulph Grange in 1840 where he and his son, James, created one of the National Trust's greatest gardens. When I posted this photo on social media last year several people commented that I looked like I belonged at Biddulph....if I'd been born 450 years earlier I would have!
You can read about our visits to Biddulph Grange HERE and HERE 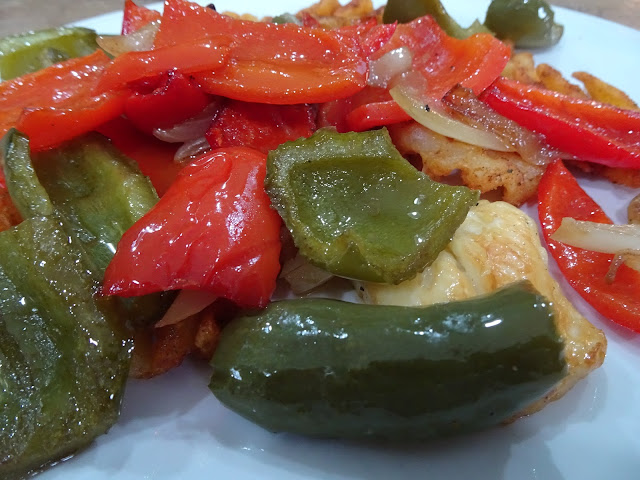 Later we had halloumi with roasted veg for tea, drank rum and watched a couple more episodes of Waking The Dead. 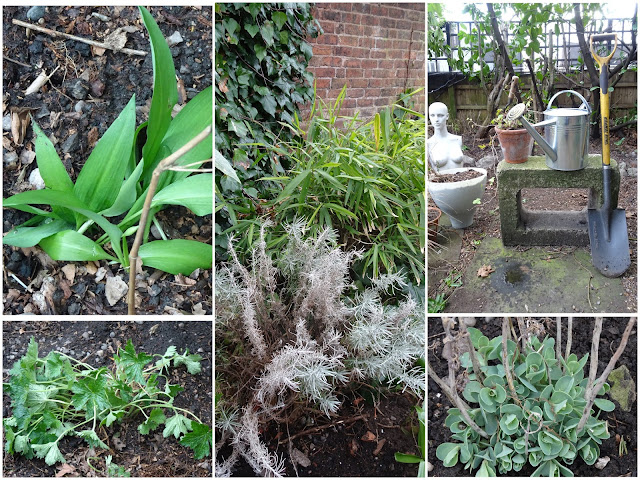 On Thursday, after my Wii Fit workout and breakfast, we worked on the garden as the sun was out and the temperature had crept up.  Inspired by the carpet of garlic in the woods at Coughton Court I transplanted some of the wild garlic from further down the garden to the area by the pond. Jon moved our old curry plant that was looking a bit tatty over to another - less visible - bed and replaced it with the sedums. He lifted our wild geraniums and split them up, planting them in the beds by the pond.

Meanwhile, I managed to squeeze five bags of uprooted bamboo into the garden waste bin before watering the garden and topping up the birdbath - which was instantly appreciated by Mr Blackbird.

After noodles, Jon drove over to the mechanic as Gilbert needed a bit of a tweak. I'd woken up earlier with the idea of a dedicated herb bed in my head (as opposed to pots and plants here, there and everywhere) so while he was out I moved one of the raised beds further down the garden and lined it with cardboard from Jon's stash. He was only gone for an hour so after a coffee we drove up to the garden centre, bought some compost (currently on special offer) and a few pots of herbs.....and some bargains trays of tulips and another half price pot managed to find its way into our trolley as well. 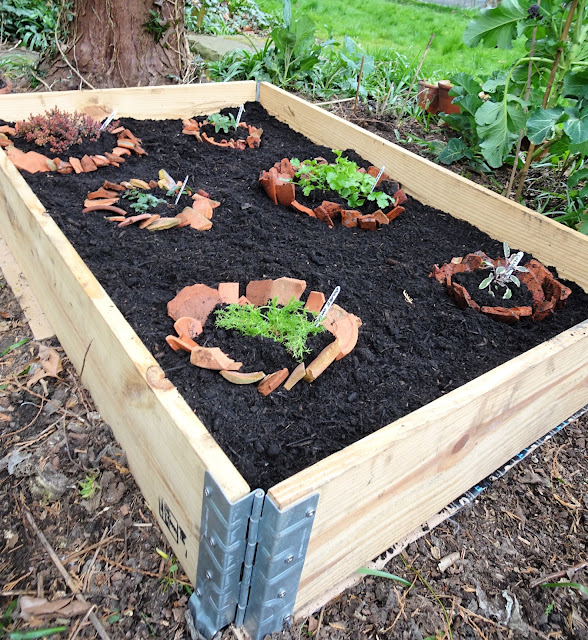 Back at home, Jon filled the new bed with compost while I planted my tulips. Once he'd finished I planted my new herbs along with some I already had, edging them with broken terracotta pots to add some interest. 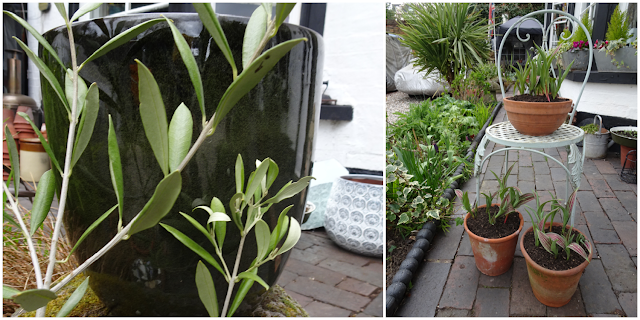 It's been a strange old day, I've lost count of the number of times I've taken my hat and jacket off only to be dithering with cold. 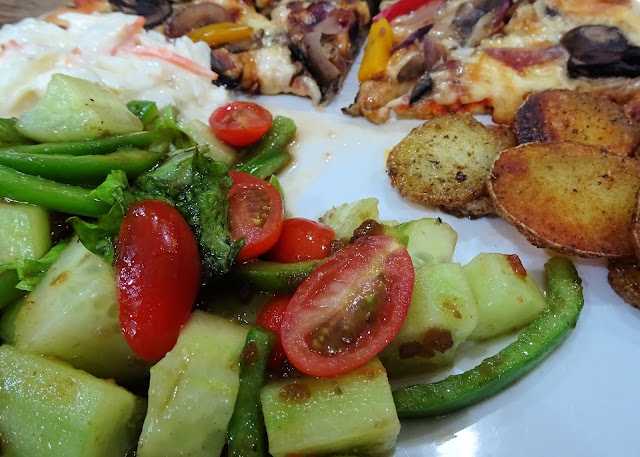 Tea was half a pizza, salad and potato fairies and because someone always asks, they're a Black Country favourite, fried potato slices (although Jon does ours in the oven). Tonight we'll be watching more Waking The Dead and anticipating a trip to Wilko in the morning.
Stay safe & see you soon!
Posted by Vix at Thursday, April 08, 2021

Email ThisBlogThis!Share to TwitterShare to FacebookShare to Pinterest
Labels: Family, Gardening, It's All About Me, National Trust, Out and About, Outfit, Pets