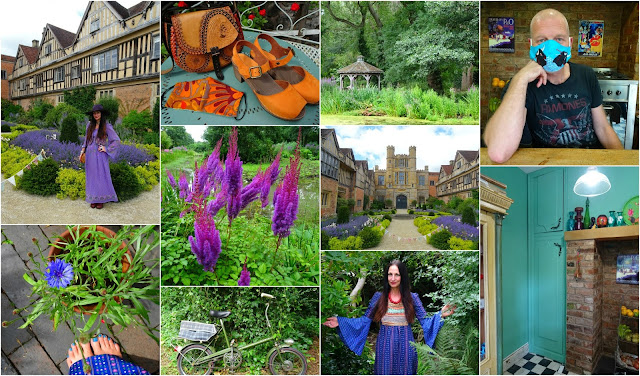 Unlike the previous day, Tuesday morning was mercifully dry. After my Wii Fit session and our fruit & yogurt breakfast, Jon made sandwiches, filled the flask and off we headed to Warwickshire, a forty-minute drive away, to this week's National Trust adventure, the magnificent Coughton Court. 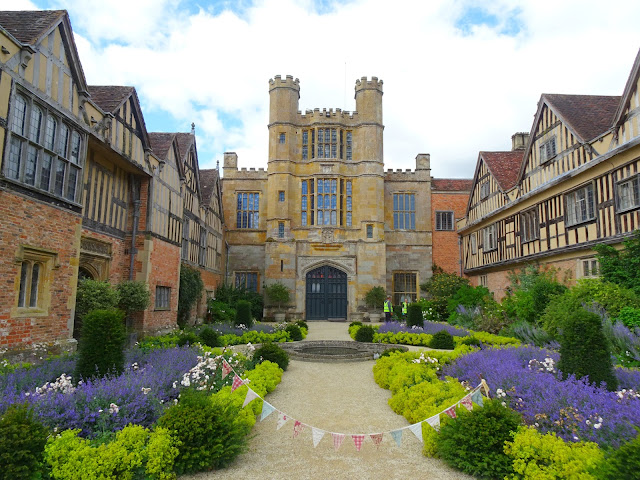 The Coughton estate has been owned (and inhabited) by the Throckmorton family since 1409. The house was rebuilt by Sir George Throckmorton in 1549. He became notorious due to his involvement in the divorce between King Henry and his first wife Catherine of Aragon as he favoured the queen and was against the Reformation. After his death in 1552, Coughton passed to Sir George's eldest son, Robert and his family, who were practicing catholics. The house was adapted by the family to accommodate a priest hole in which Catholic priests could hide, as Catholics were persecuted by law in Elizabethan England. Coughton Court gained notoriety for the Throckmorton Plot, a failed plan to murder Queen Elizabeth in 1583 and also for The Gunpowder Plot, in which the conspirators rode directly to the house directly after their discovery in 1605.

It was our first visit to Coughton Court and we loved it. The drifts of carefully co-ordinated coloured plants, flowers and shrubs were an absolute joy. I had no idea there was a predominately purple theme, in the form of huge swathes of Nepeta and, by happy coincidence, I matched the landscape perfectly.

After a wander through the woodlands, admiring the quirky wooden structures, magnificent trees and shade-loving plants we followed the trail to the Bog Garden. 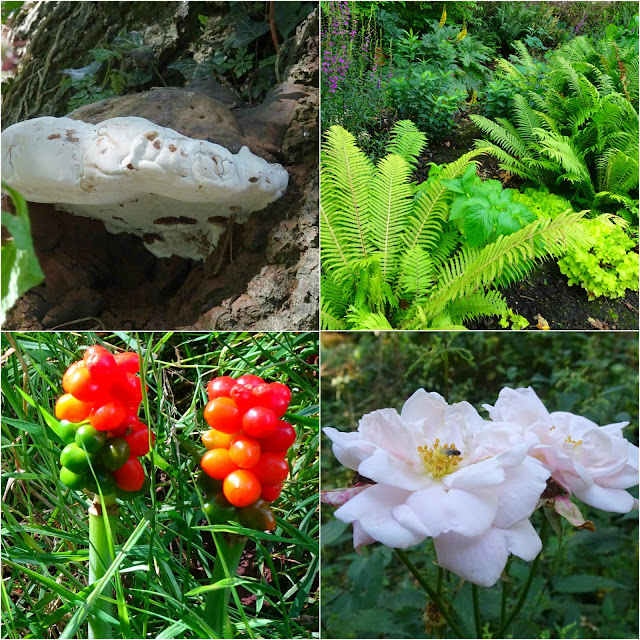 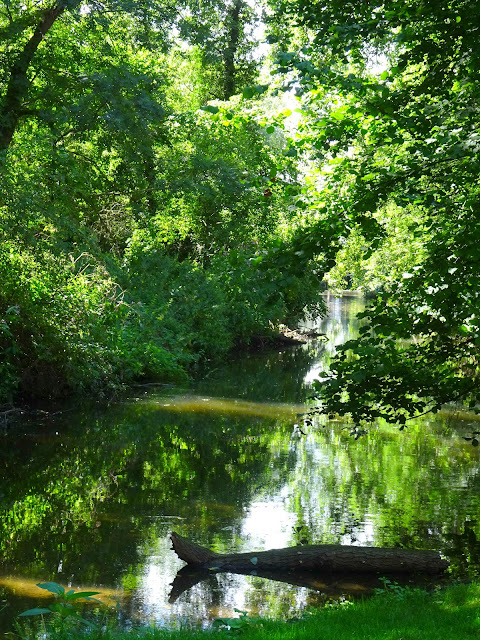 Following the heavy rains of January 2020 many of the plants in the Bog Garden were washed away although it looked like the garden was starting to slowly recover, it really was beautiful. 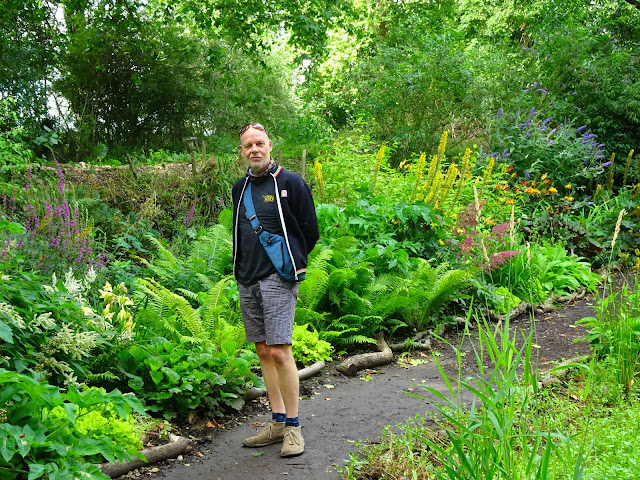 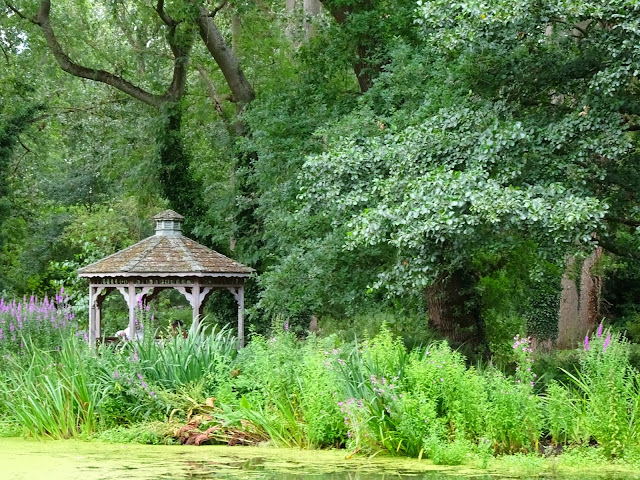 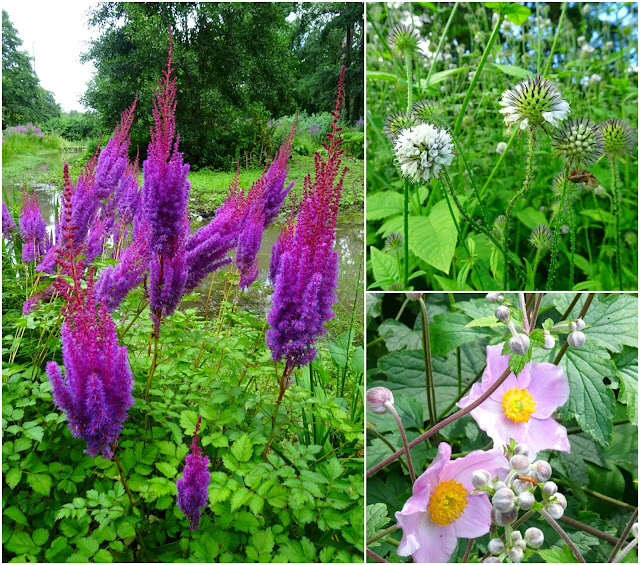 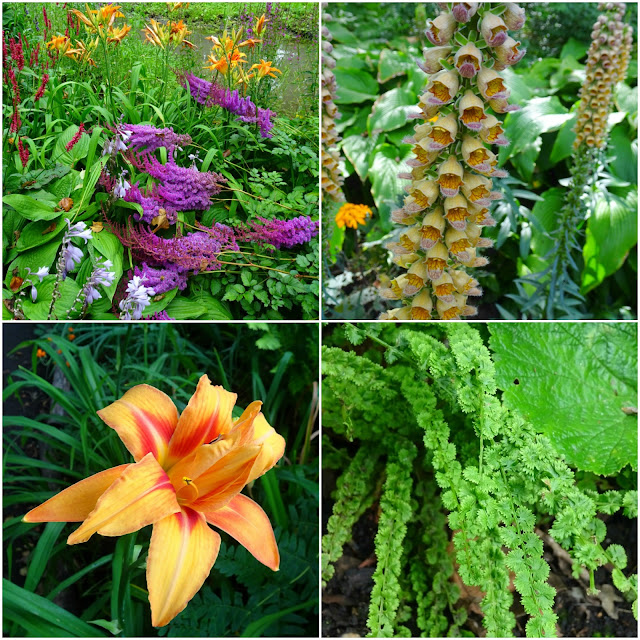 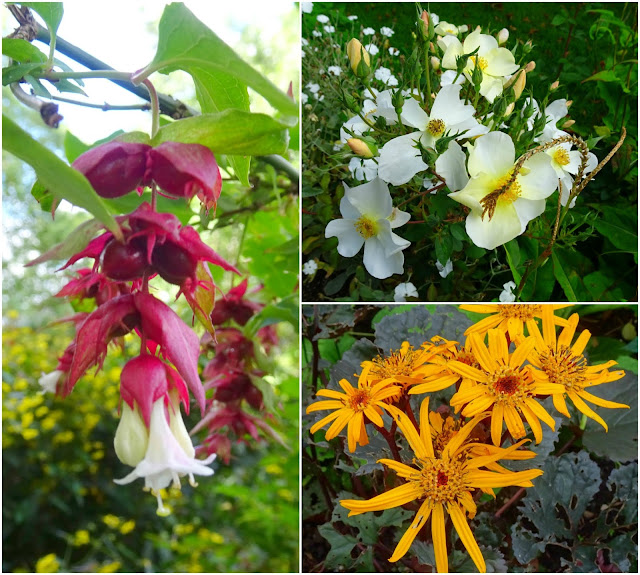 From the bog garden we wandered through the orchard where trees were already laden with ripening apples. 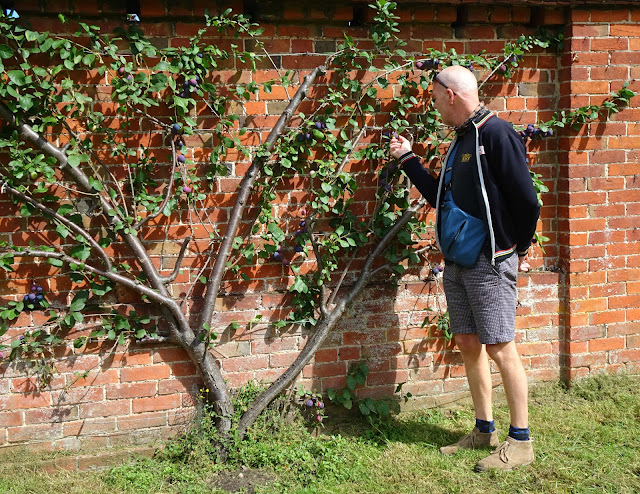 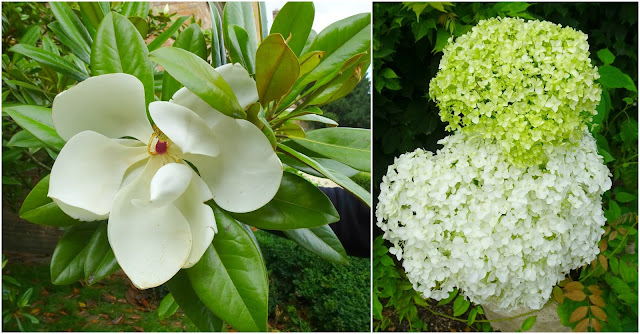 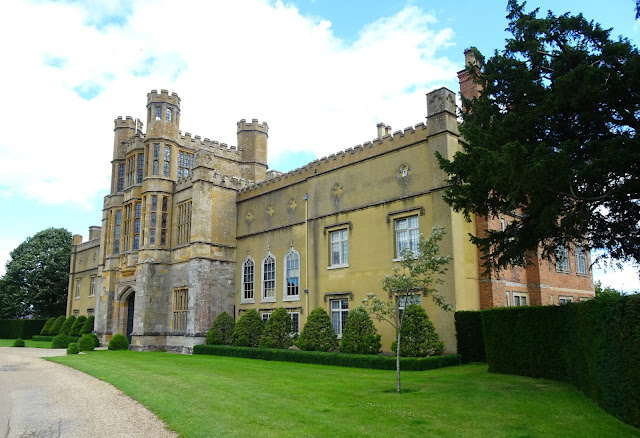 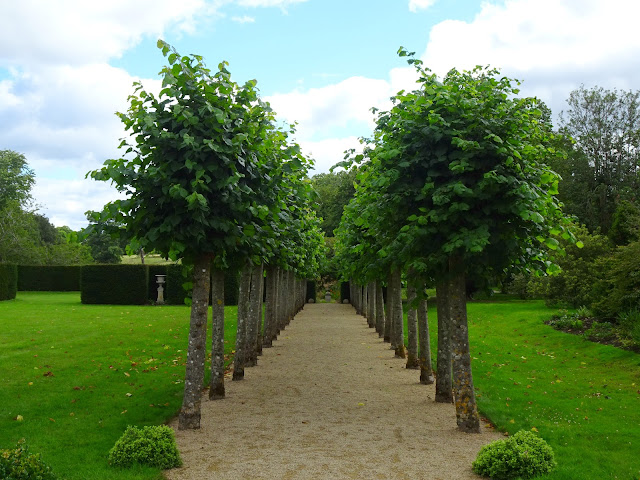 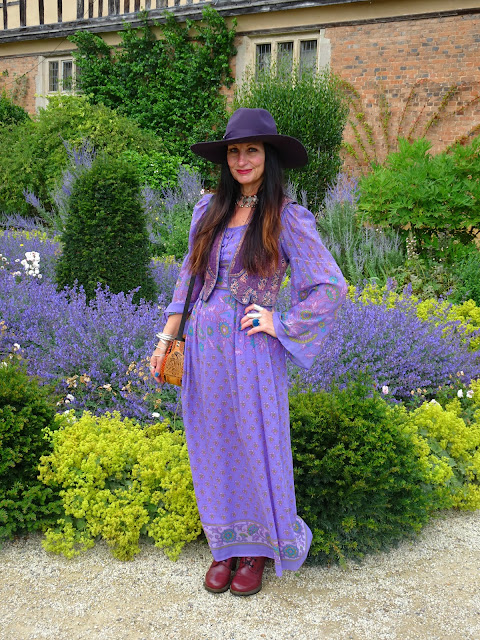 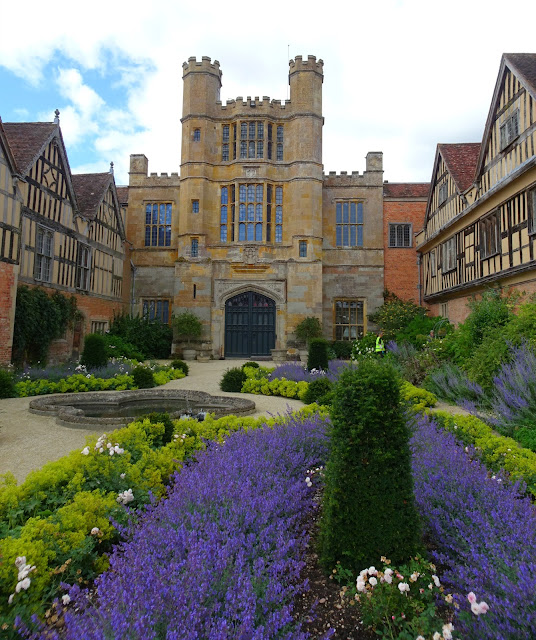 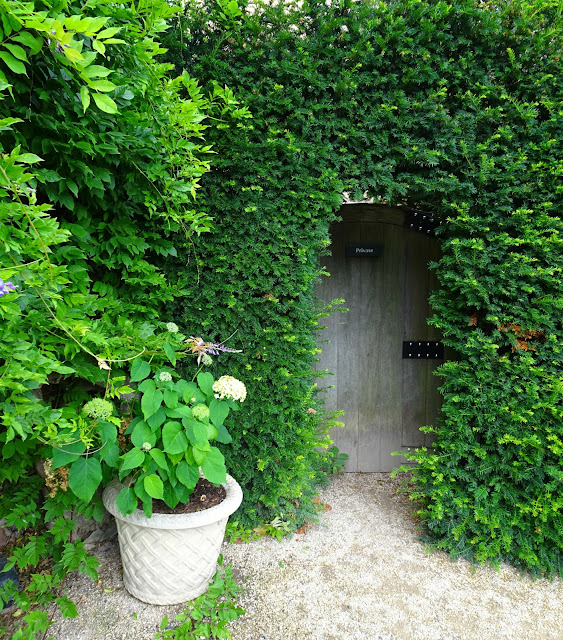 After we'd eaten our sandwiches we headed back to Walsall. Jon dyed some of his old tee shirts black whilst I downloaded and edited my photos and swept the patio then I grabbed my bag, swapped my Docs for Lottas and wore a colour co-coordinating face mask. 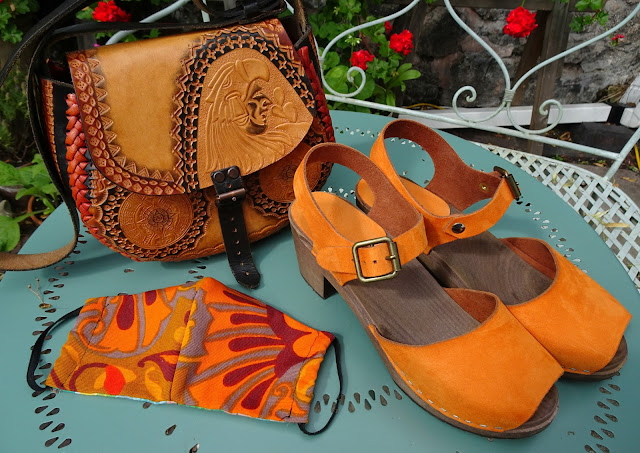 Jon drove me down to the hospital where, despite being free, there was an abundance of available car parking spaces. The clinic felt perfectly safe. The receptionist sat behind a glass screen, there was hand sanitiser available at the entrance to the waiting room and designated seats clearly marked at a two metre distance. Everyone, from the four patients waiting to the nursing staff on duty, wore masks. The nurse I saw went wild over my mask and said she'd never seen anything lovelier. As usual my blood pressure and weight were "perfect" & unchanged from last year.  After my appointment I was accompanied to the fire exit at the back of the building and encouraged to use more hand sanitiser on exiting. Tea was the rest of the posh pizza with salad & four sweet potato chips Jon found in a bag at the back of the freezer (he had potato wedges). We watched Salvage Hunters and Hidden Secret Cities, Istanbul on the i-player. 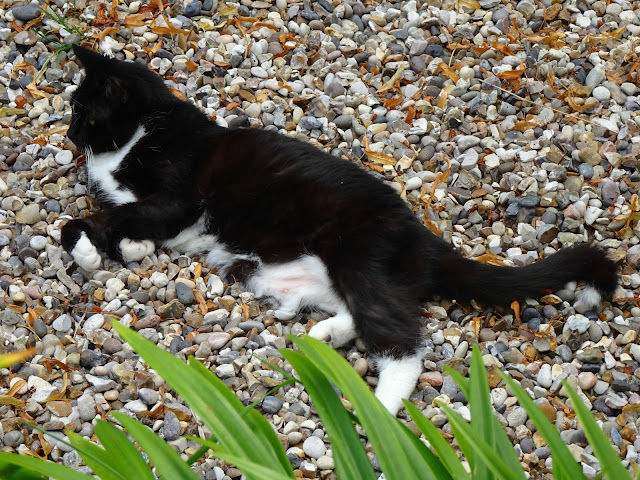 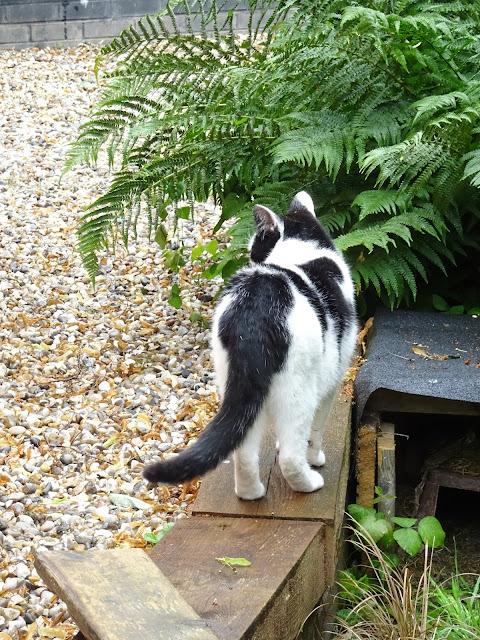 On Wednesday (day 131) I was up before 6am. After I'd let the lads out, I thought I'd apply for a £50 government voucher to get my poor old bike repaired as BoJo had been banging on about it all day yesterday. Applications had opened at the rather odd time of 11.45pm the previous evening  and, as with most of these seemingly too good to be true government schemes, once I got online the website had crashed. I tried again after my Wii Fit session & there was a message to say that all the vouchers had now been claimed. It makes me wonder how many were actually available.


I caught up with blog comments and when Jon got up we had a slice of toast for breakfast as we'd run out of yogurt. After we'd eaten Jon went off to the shops for supplies while I swept up the lime tree debris and cut back the brambles growing from the hedge into the avenue & threatening to blind passers-by. I wheeled back the garden waste bin that had been collected earlier and managed to fill it ready for collection in a fortnight's time. 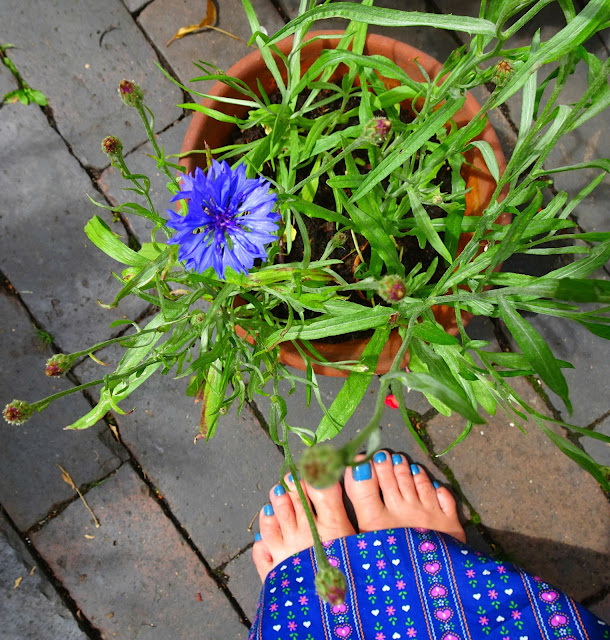 Jon returned with the shopping and I joined him for a coffee before giving the garden a thorough watering and doing a bit of dead-heading. Look! My first cornflower, grown from seed. 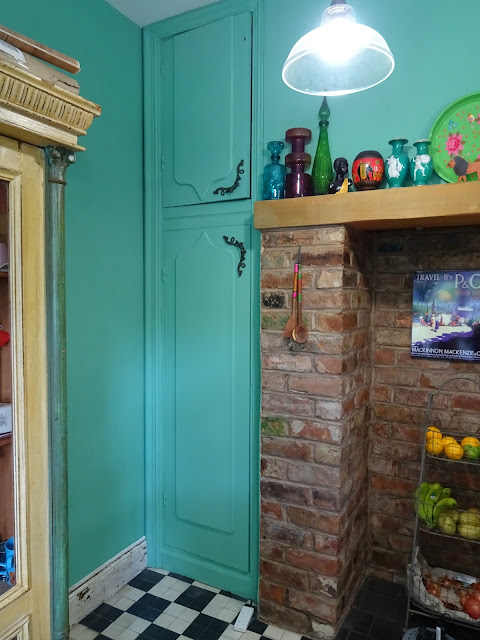 Jon finished painting the cupboard and, after a break for our lunchtime noodles, we sorted through the boxes of stuff we'd moved from the kitchen a few weeks earlier and soon filled it. 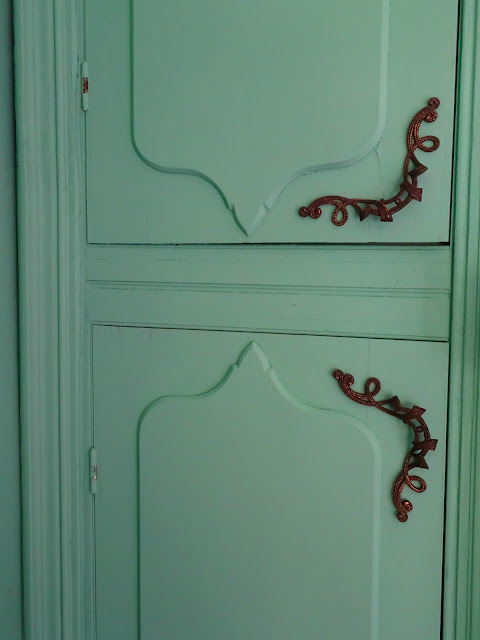 I think Jon was beginning to regret suggesting that he build a fitted cupboard. When we moved in there was one already which we had to remove in order to repoint the kitchen wall. He thought that he'd kept the original doors but he'd got confused and it was actually an old Victorian bedroom cupboard we'd broken up to build an upstairs bathroom that he'd seen in the shed. As the house is 270 years old there's not a straight wall or floor anywhere and it's been a real labour of love to cut the wardrobe doors to size and odd shape. He edged the cupboard with architrave and skirting boards salvaged from Liz & Al's wood pile and used a pair of handles we've rescued from a knackered 1930s dressing table which was broken up for firewood years ago. 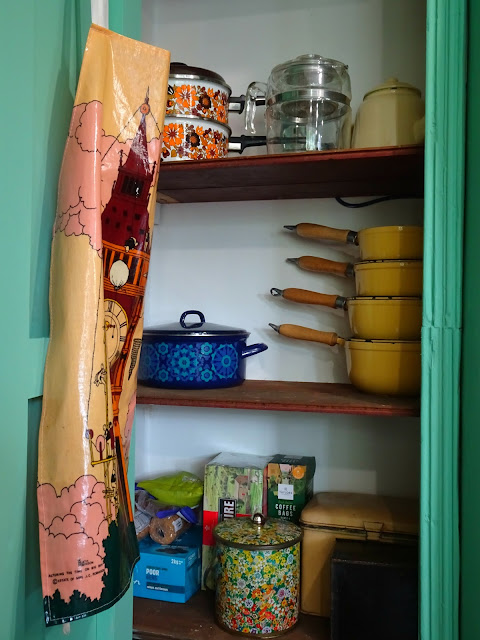 The shelves were the sides of the old wardrobe attached by batons which were bits he'd rescued from the wood pile. The only cost was Jon's time. You can just about see what used to be in the corner HERE. 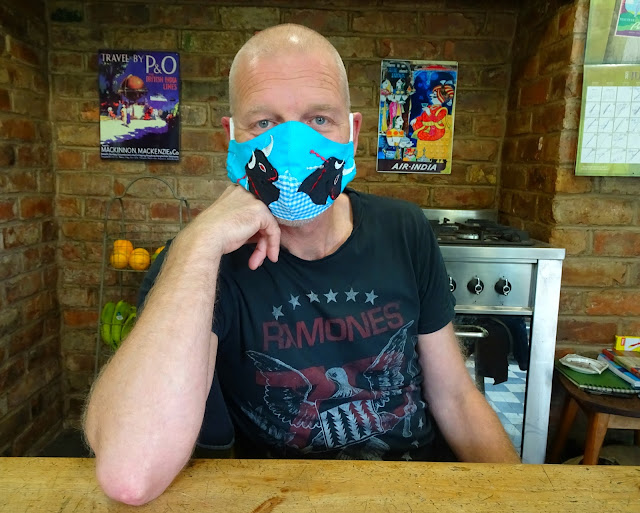 I'd sewn a mask for Jon the previous evening and added the elastic after we'd dealt with the cupboard. It's made out of a pair of vintage 1970s Souvenir of Benidorm embroidered napkins which were looking a little worse for wear after too many parties (I know the feeling). 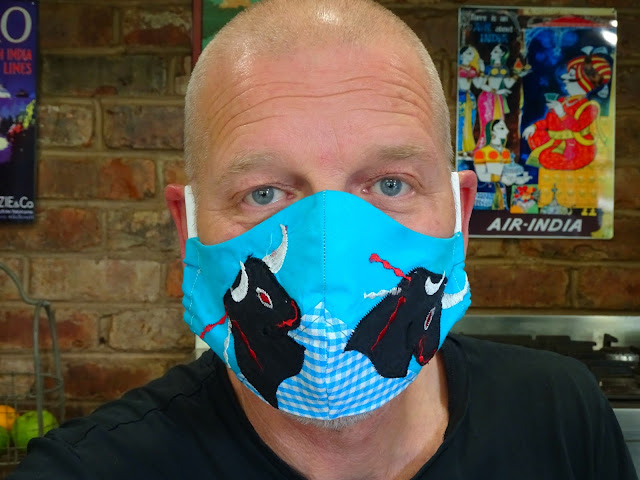 Today's outfit was admired by several passers-by whilst I was trimming the hedge.


This dress has been seen numerous times on my blog, its the bastard love child of a charity shopped 1960s maxi dress and a tatty Kuchi bag. With its piecrust collar, ruffled bodice and elasticated cuffs I looked like a reject from Little House on the Prairie so I took the scissors to it and remade it into an Afghan style dress. 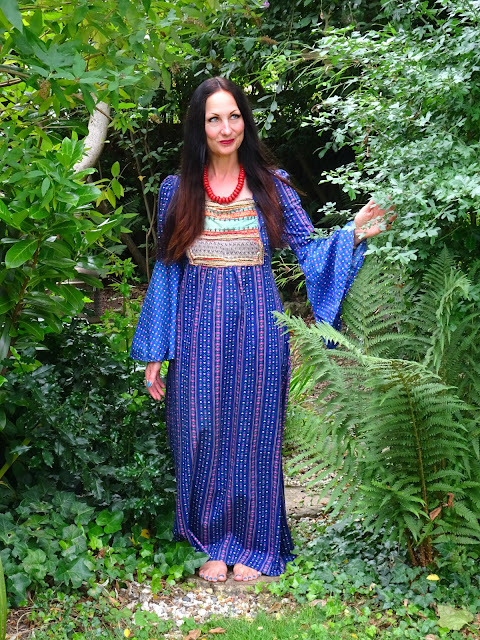 What is new are these Kuchi earrings that were made by Afghan refugees in Peshawar in Pakistan and accidentally fell into my basket when I was buying something for Jon's birthday from eBay last week. They'd arrived earlier & I wore them immediately as they matched my sponge coral necklace. The seller had described them as being "not a perfect finish as handmade" but at £3.99 I'm thrilled with them, so much so that I've ordered another couple of pairs. 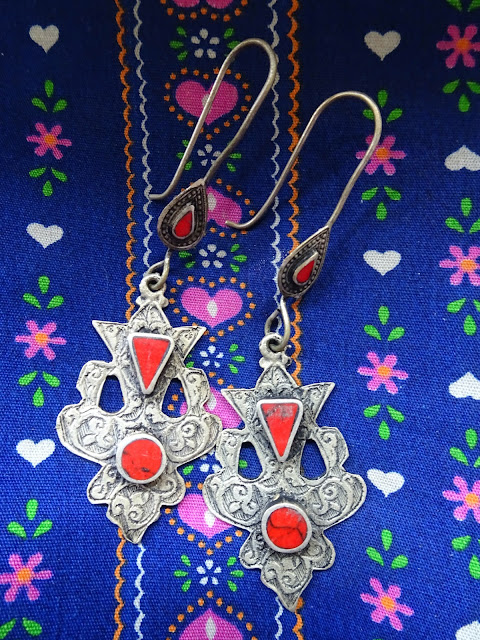 After I'd finished posing in the garden I made Jon a homegrown rhubarb and apple (which I'd scrumped yesterday) crumble which he'll have with custard after our grilled haloumi & roasted vegetables.

Email ThisBlogThis!Share to TwitterShare to FacebookShare to Pinterest
Labels: Gardening, It's All About Me, Jon, National Trust, Our House, Out and About, Outfit, Pets, Stuff I've Sewn