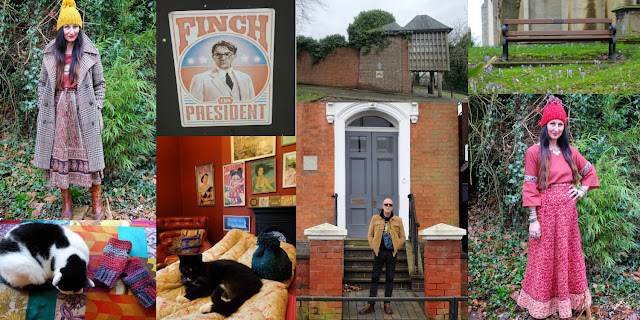 An indignant *brip* woke us at 7.45am on Saturday morning, it was Frank anxious to go out. Jon got up, let the lads out and brought tea back to bed where we lay and read until the MyHermes man rapped the door at 9am. Jon went downstairs to start breakfast and I stripped and remade the bed and loaded the washing machine. 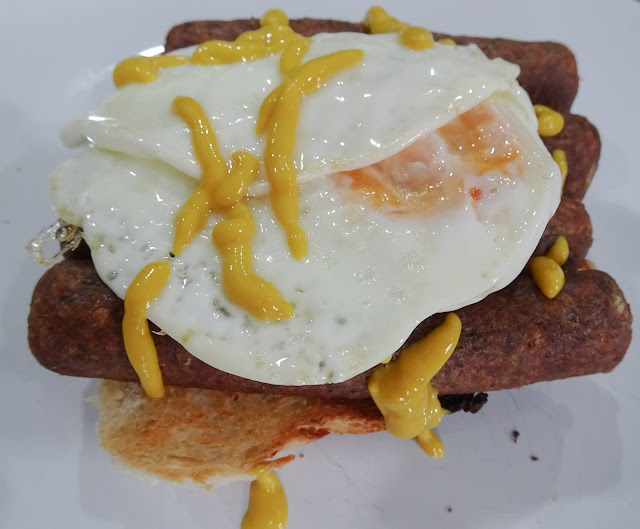 After a breakfast of veggie sausage, a fried egg and a slice of toast I removed my nail paint and dusted and swept the bedroom before getting dressed. 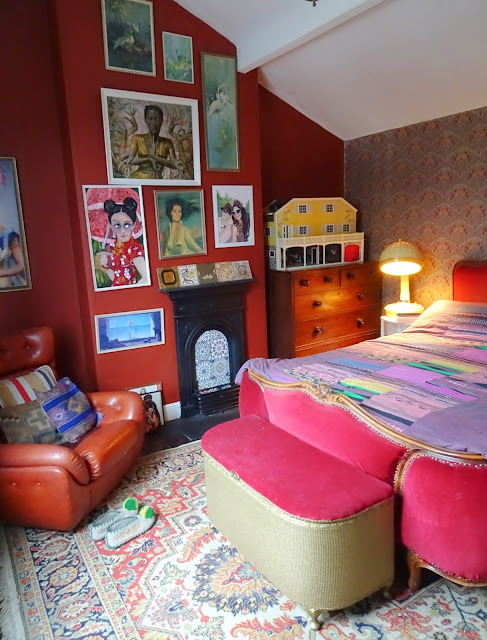 Once Jon was ready we went out litter picking in the pouring rain, bumping into several old friends along the way. There wasn't too much litter but with all our chatting we were out for well over an hour and absolutely wringing wet when we got home. 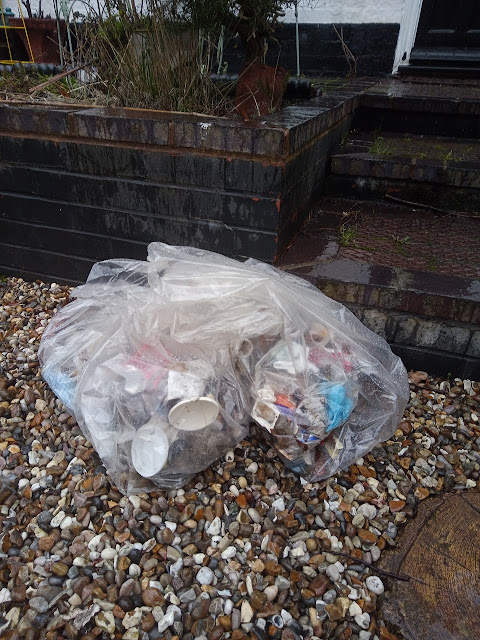 We had a posh frothy coffee and spent the rest of the day pursuing our individual pursuits, Jon fitted some new straps to a few of his watches ( I say a few, he's got quite a collection of secondhand watches).

Whilst, using a ball of my new wool, I made myself some beer mittens following a tutorial I'd found on YouTube. 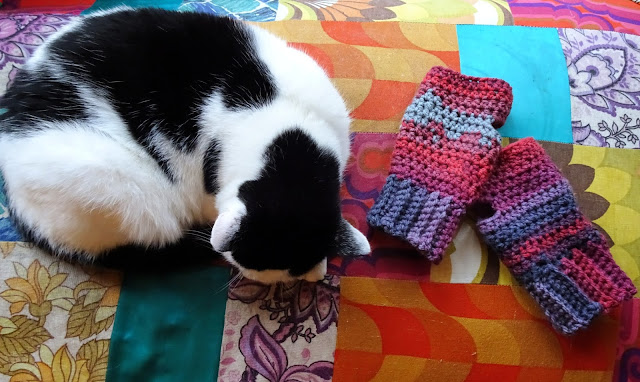 Wear:Sleep:Repeat continued with my Anokhi maxi skirt, this time worn with the hat I made last weekend and an organic dobby cotton lampshade sleeve top bought from FabIndia in Panjim (Goa's capital city) a couple of years ago. 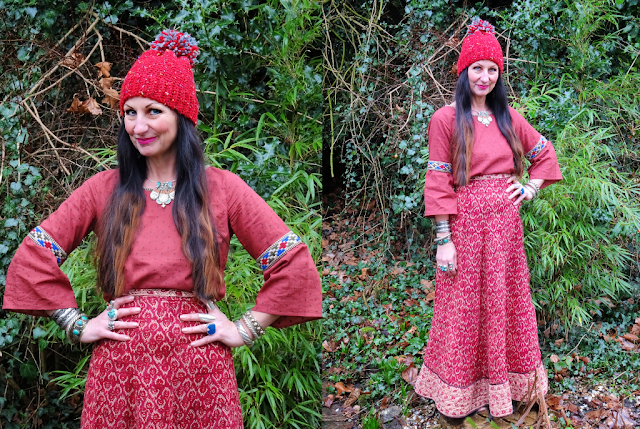 As we'd not eaten since breakfast, tea was early, eaten in front of the TV in the lounge with a glass of wine and consisted of Friday's beer and olive bread, cheeses, pickle, my homemade potato salad and olives. 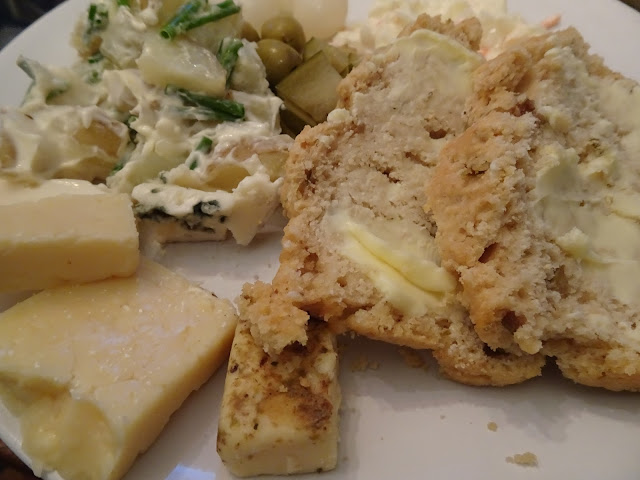 We spent the evening watching Deutchland 83 with rum & cola. 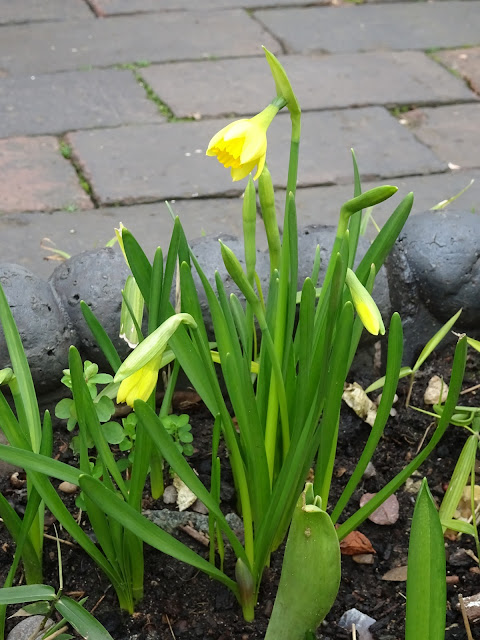 On Sunday morning Stephen had me up at 7.30am. I made tea and brought it back to bed and we lay and read until it was time to tune into Andrew Marr at 9am. We had toast for breakfast and I painted my nails before starting my next crochet project. I did a happy dance when I spotted my first daffs of the year, inexplicably growing in our border. I've no idea how they got there! 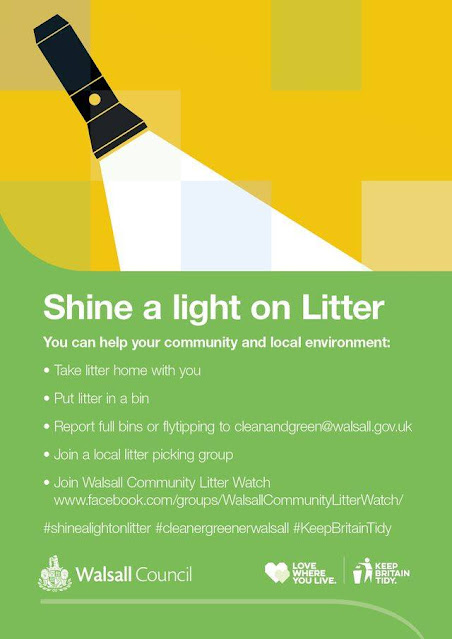 Once dressed we set off for a walk. Our community litter picking group have pledged to litter pick specific areas of Walsall next Sunday as part of the council's Spotlight on Litter campaign so we were off to scout a suitable area we could tackle. Last night we could hear some car engines idling for ages but, as the door was locked and the lads were in, didn't bother going outside to see who it was. When we left the house the avenue was awash with McD**ald's wrappers and takeaway boxes, filthy scumbags! We'd got soaked to the skin yesterday cleaning up after people and the idle bastards go and do it again. I went back inside, got my grabstick and gloves and filled a bag with their crap. I've always said I'd rather eat out of a bin than dine at McD**alds, obviously their clientele don't even know what a bin is. 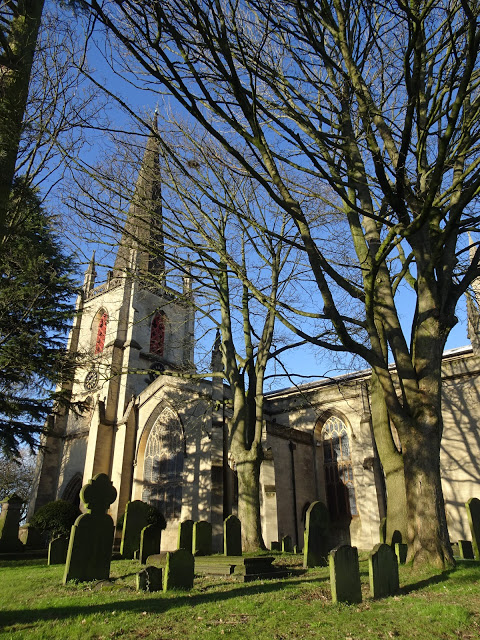 We walked up to St Matthews (that's a photo I took back in December, today wasn't sunny) and decided that picking around Church Hill would be next Sunday's task. We noticed that there were a couple of council bins up there so we can attach official stickers to our rubbish bags, post photos to the Facebook page when we're done and the binmen will collect when they empty the bins up there. 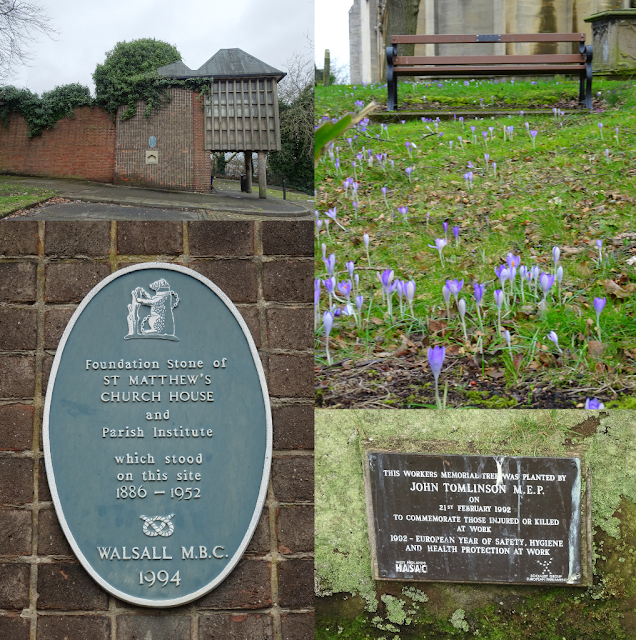 We had a wander about, spotted signs of spring in the graveyard, a blue plaque I'd never noticed before and a memorial from the Socialist Alliance dedicated to all those injured or killed at work. The marvellously Brutalist structure replaced the former St Matthews Parish Institute when it was demolished in 1952. 28 and 30, Birmingham Road date to 1850 and were formerly posh residences but have been offices since the 1960s. 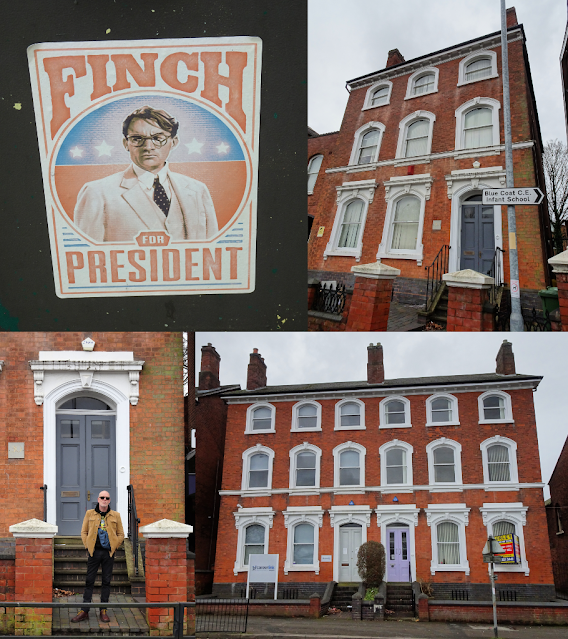 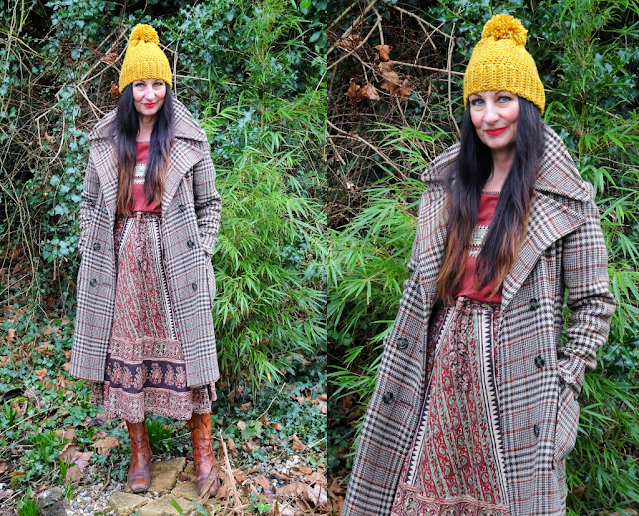 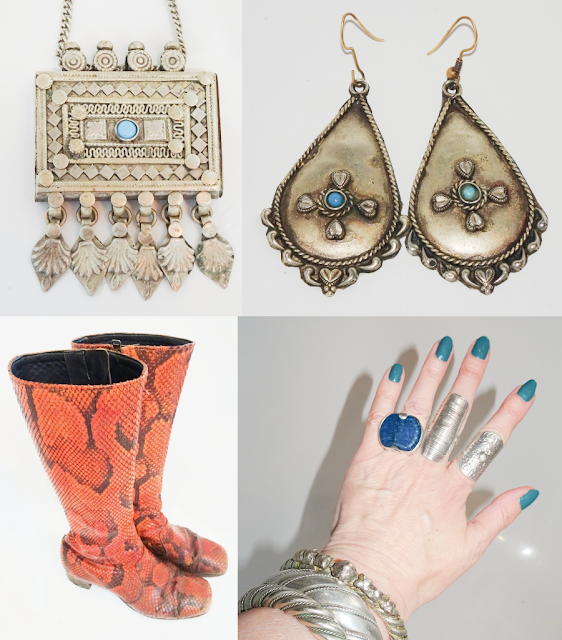 For the first time this year we enjoyed an al fresco coffee in the shelter. After our lunchtime noodles I continued with my crochet, whilst Jon did some vehicle shuffling outside. 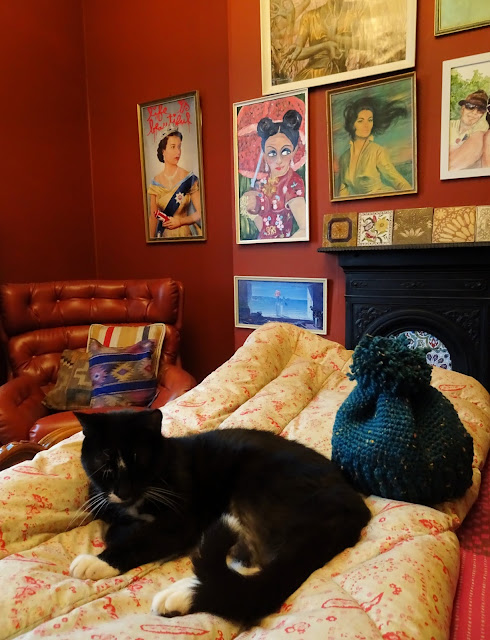 Project completed - another pom pom hat - I thought I'd continue with my new series, cats and crochet. I spent the remainder of the afternoon wrapping eBay parcels. If the government really do decide to open up in the late summer and music festivals are allowed to happen I'm starting to panic, by the rate we're selling stuff there'll be no stock left. 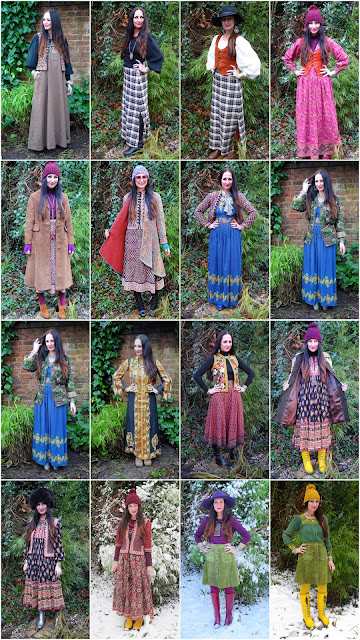 I can't believe tomorrow marks day 43 of my Wear:Sleep:Repeat challenge, by the way it's going I could be doing this for months! Maybe I'll be shoe-horning in sandals and a sunhat before too long. 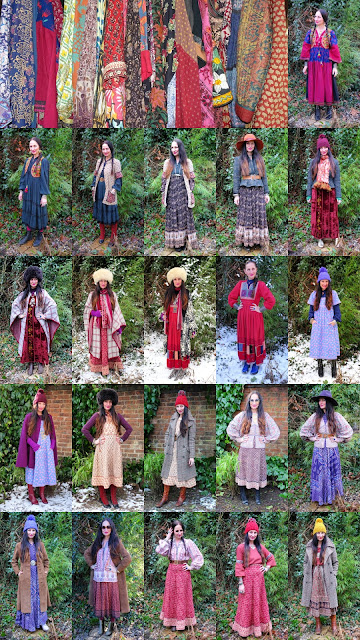 Tonight we're having pizza and the rest of my potato salad for tea then it's another Deutchland 83 extravaganza. I'd better get blog reading and commenting, I've fallen way behind.

Email ThisBlogThis!Share to TwitterShare to FacebookShare to Pinterest
Labels: Crochet, Jon, Our House, Out and About, Outfit, Pets, Wear:Sleep:Repeat