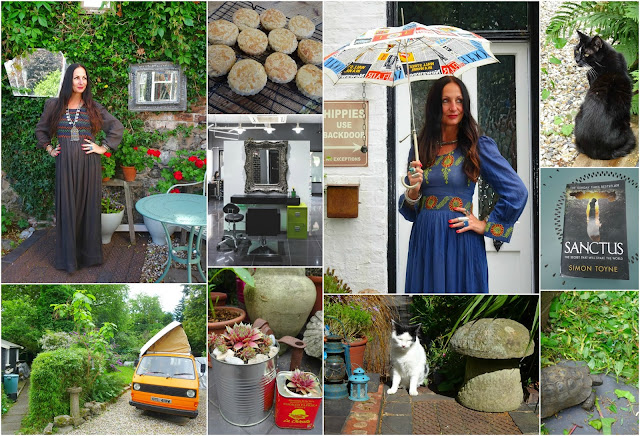 It was a lovely sunny start to Monday (day 108) when I got up at 6.15am, I fed the lads, caught up with the blog world and did my Wii Fit session but by the time I'd taken a mug of tea up to Jon the skies had clouded over. 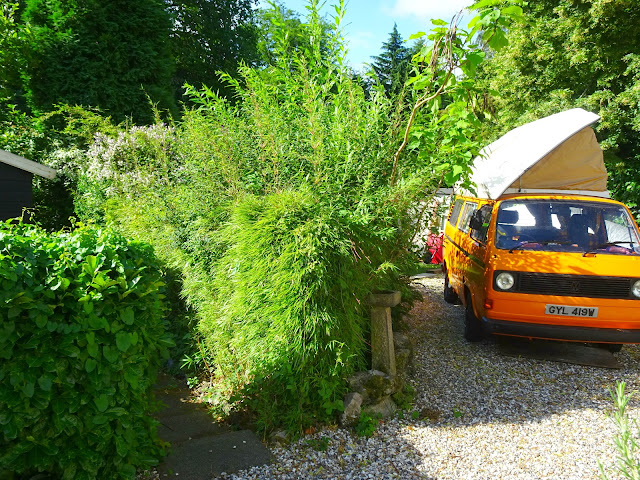 After our fruit and yoghurt breakfast the sun had reappeared & Jon decided that today was the day he'd cut back the bamboo. Once dressed, he set to work with the strimmer while I did my daily raking up & sweeping of the lime tree detritus. 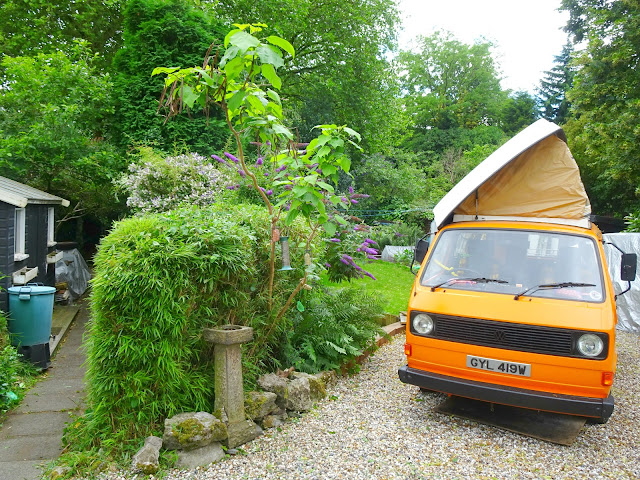 When he'd finished we put everything through the shredder, creating three bucketloads of mulch to top up Jacob's enclosure. I love that we can see both buddlea bushes from the kitchen window now, they seem particularly beautiful this year or maybe they always were and I was just too busy to notice. 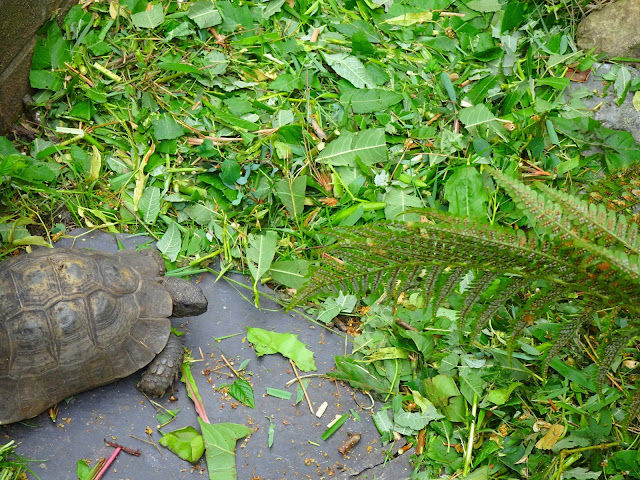 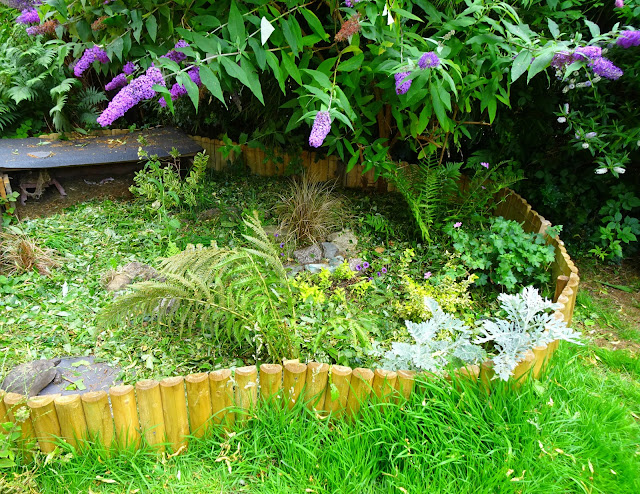 We were having to limbo beneath the crocosmia to get to the table so Jon staked and tied it back while I'd planted out & watered two of the dwarf French bean plants I'd planted a couple of weeks ago (no sign of life from the other two) we rewarded ourselves with a posh coffee. 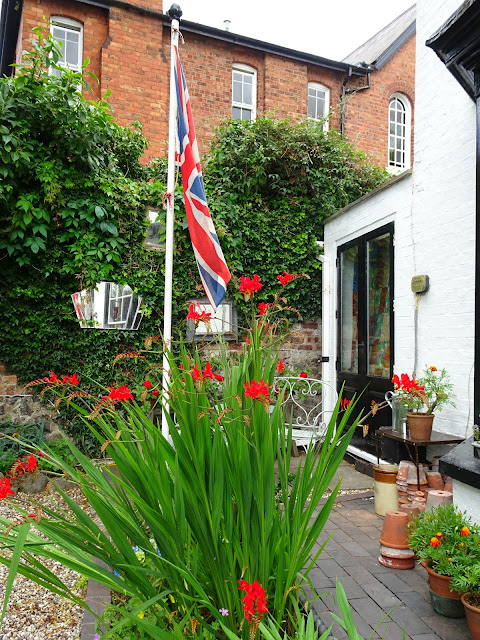 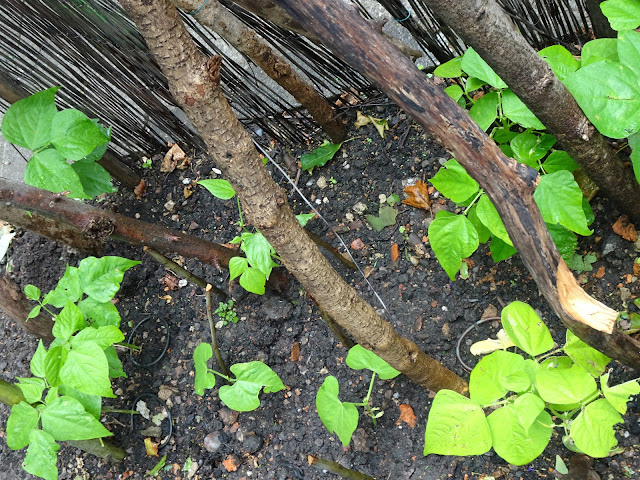 After our lunchtime noodles Jon popped round to Tony's as he'd managed to get him a couple of grocery items he'd been unable to find in his local shop. Meanwhile I emptied out the last of the kitchen cupboards ready for Jon to work his magic on later on in the week. 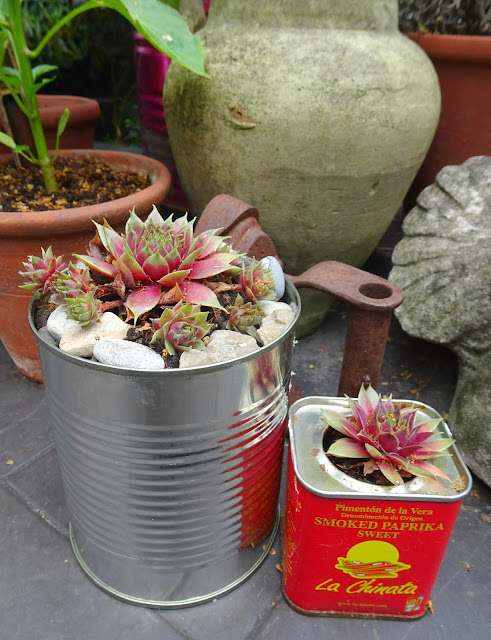 I rescued last night's baked bean tin from the recycling bin, drilled a few holes in the base and planted it up with houseleeks and spent the rest of the afternoon reading. Sitting sheltered from the breeze, the sunshine was warm and rather lovely. 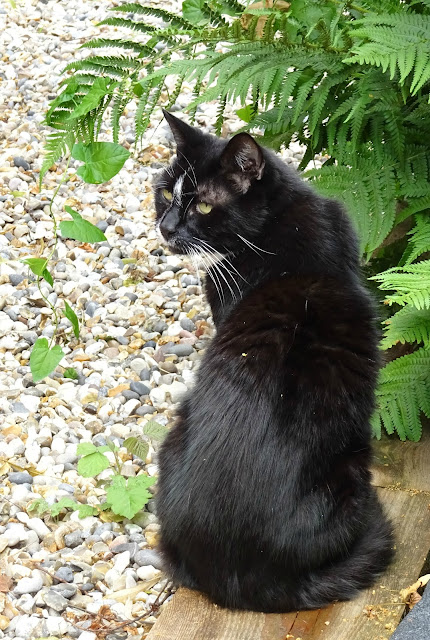 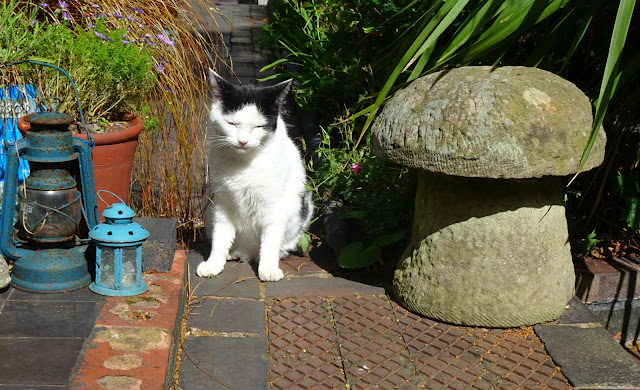 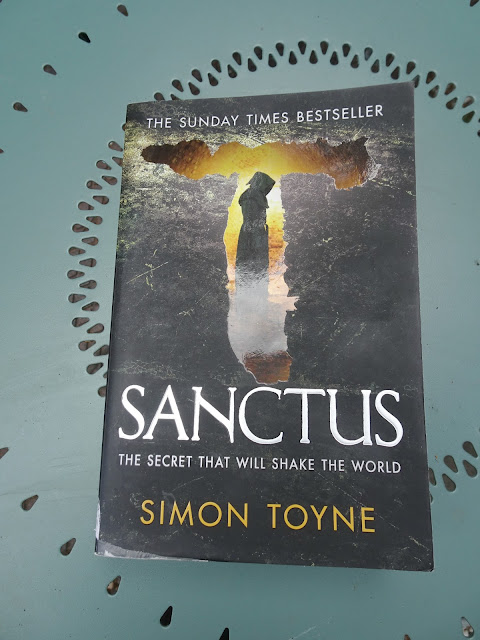 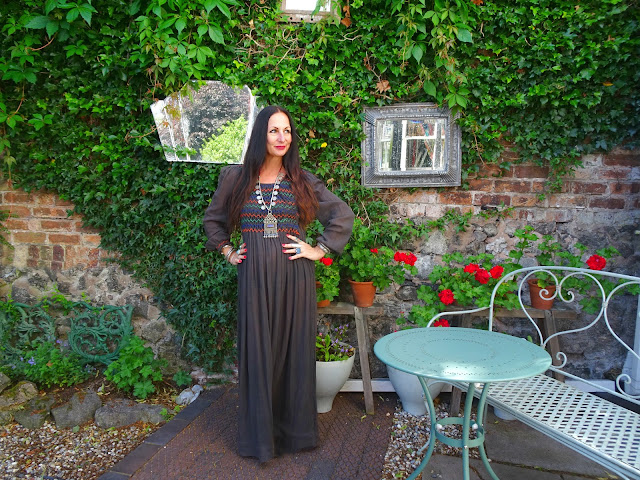 If you're British and over 50 you'll doubtlessly remember Chelsea Girl with as much fondness as I do. Before the days of cheap fashion you'd have spent your teenage years swooning over their clothes, frantically saving your wages for the garment of your dreams. Founded in 1965, it became River Island in 1988. The Chelsea Girl label was relaunched in 2011 and chances are, if you see Chelsea Girl listed in the vintage section on eBay it'll be a modern garment as the originals are surprisingly rare. How do you tell if it's modern? The early pieces go by sizes 1, 2 and 3, not by the standard UK 8, 10 or 12 and the country of manufacture won't be Bangladesh, Turkey or China. The label will usually advise you to Hand Wash. 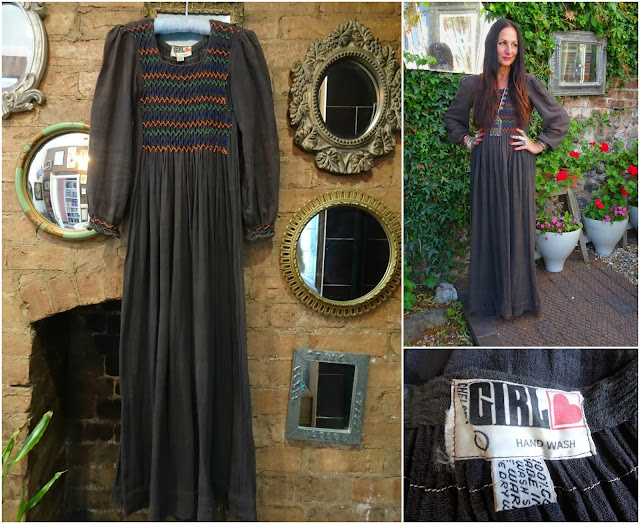 Before tea I gave all the patio plants a thorough watering. We ate veggie sausages with mixed vegetables, spiced potato fairies & Yorkshire puddings and watched the series finale of Scotland's Best Home. I was delighted that my three favourite homes, all old buildings filled with antiques, inherited treasures and ecclectic secondhand finds made the final. 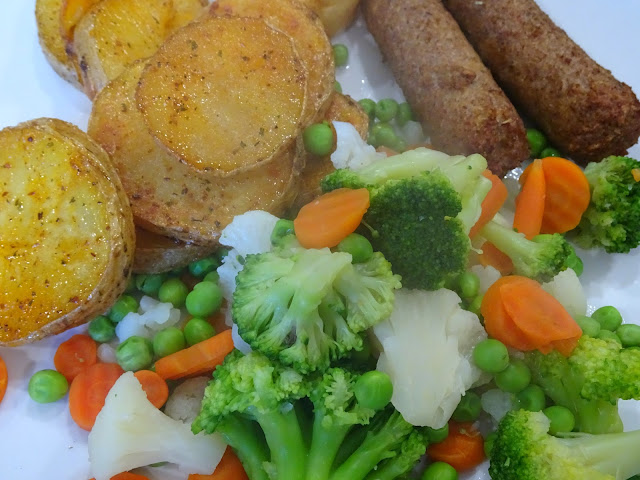 When I got out of bed this morning at 6am (day 109) I'd been awake for what seemed like hours. After my Wii Fit I took Jon a mug of tea, checked up on the garden and dyed my eyebrows & lashes. When Jon was up we had our fruit and yoghurt breakfast and I caught up with some blog reading before getting dressed. 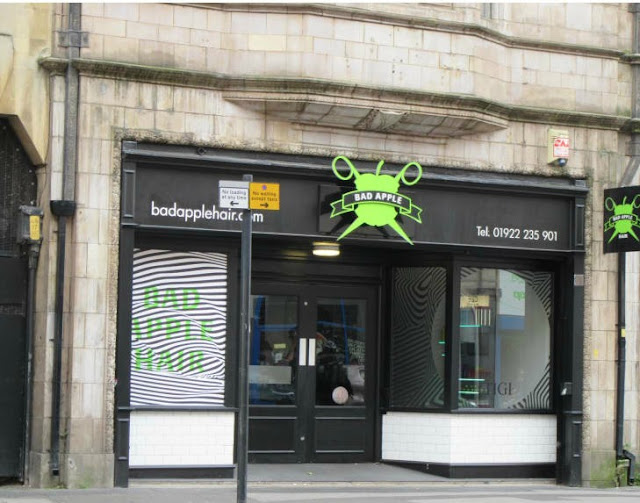 Today was a big day - and possibly the reason for my lack of sleep - I was off to the hairdresser, my fifth visit since 2010! I'd last been in February. The festival season, a week on the beach in Greece and five weeks in India had taken their toll on the condition and I was determined that 2020 would be the year I would finally invest in my hair. I was due to go back in May but with the pandemic, all UK hairdressers were forced to close their doors on March 23rd and only reopened this saturday (4th July). I've never been keen on getting my hair cut but, coupled with it being the first time I'd been into Walsall's town centre for 109 days, it was a daunting prospect. 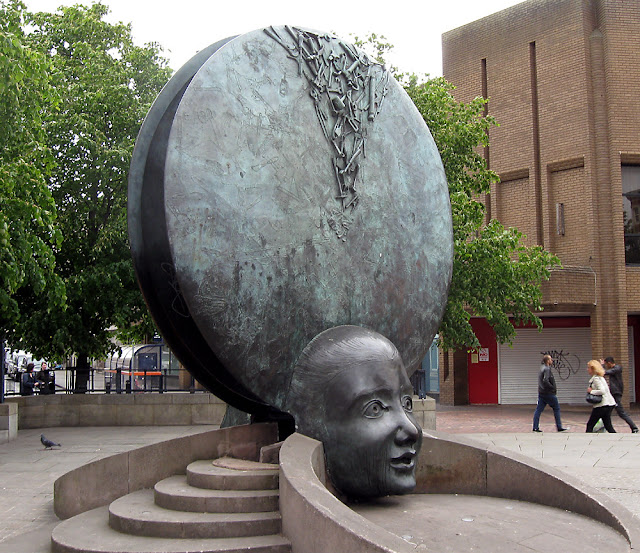 We only live a mile from the centre of town so it's an easy walk. Weirdly, it was ten minutes before I saw another human being, so much for life being almost back to normal. As I was early for my appointment I wandered around the town centre, a ghost town at the best of times but in the aftermath of Coronavirus, even more shops had been boarded up. I could see one person in the town's enormous Primark, the shutters were down on all the chazzas and there wasn't a single stall on our once-thriving market. The gang of junkies and ne'er do wells that gather outside the town's fountain, drained years ago after people kept tipping washing-up liquid into it and engulfing the marketplace in bubbles, had tripled in number and two of them, already off their heads on Special Brew by 9.45am, started yelling at me to join them. When I ignored them they got up and proceeded to chase after me, luckily the salon doors were now open and I was able to escape their clutches. 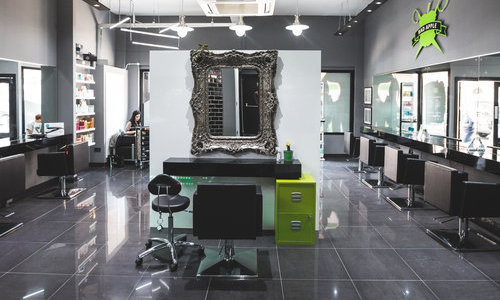 On arrival, the receptionist, wearing a face shield and sitting behind a perspex screen, welcomed me in. I was already wearing my mask. A electronic device checked my temperature, I was asked to sanitise my hands and then taken over to a chair by my stylist, Keri (also wearing a face shield) where we discussed what I wanted done. Before she washed my hair, in a sink partioned off with perspex screening, Keri helped me into a polythene overall and apologised for not being able to offer me a drink. There was only one other client in the salon and one of the staff was continually sanitising every visible surface. I'd paid 50% of the bill over the phone last week and the remainder was paid contactless via their card reader. Despite the masks, face shields and screens I felt safe and relaxed - and that's coming from someone not all that keen on visiting the hairdressers. I'm determined to maintain the condition of my hair so I've booked another appointment for three months time. I wonder what the world will look like then? 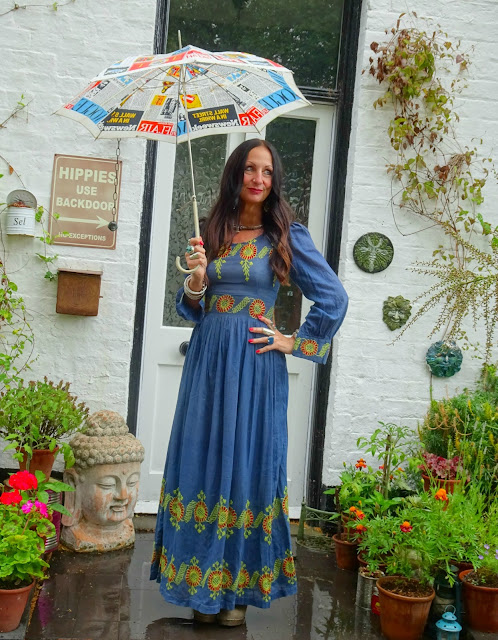 With nothing to hold my interest in town I walked home. It had started to rain but, amazingly for me, I'd had the foresight to take an umbrella. Jon had been out trying to fit new tyres to his bike but rain had stopped play. For lunch we had cheese and Jon's wholemeal spelt bread drizzled with olive oil.


New hair! Shiny ends instead of horribly frazzled ones and waves, too. Keri was so excited by her handiwork and by my vintage dress and groovy mask (made by Liz using the leftover fabric from my Treetops dress) that she photographed me for the salon's Instagram feed. I'll share when the boss uploads it. 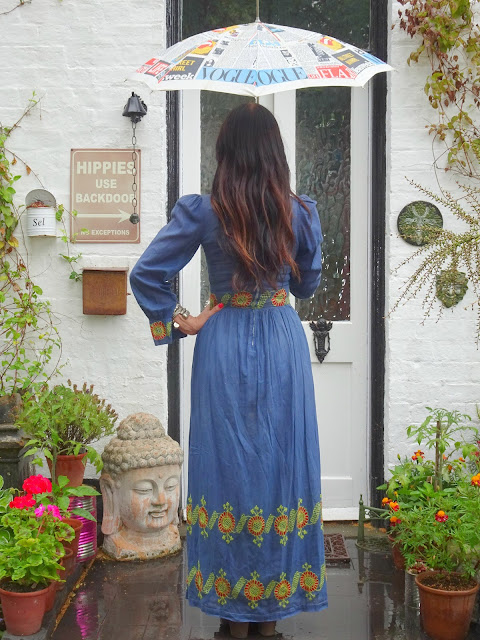 After lunch Jon went on an emergency grocery top-up shop (we're nearly out of rum!) and, as we're off on an adventure tomorrow, I made something to take with us. 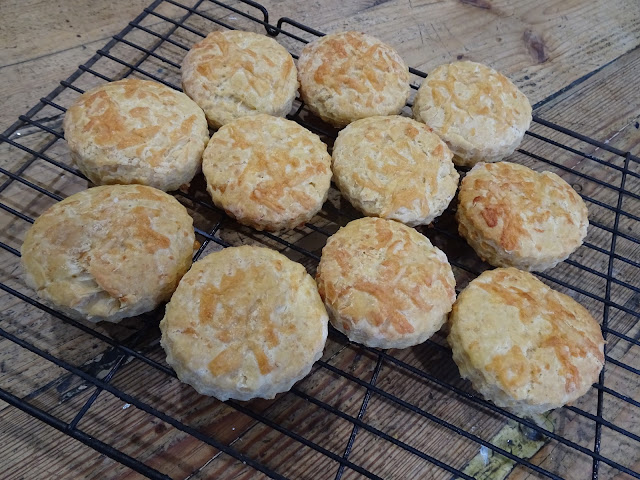 I modified a recipe I'd found online as we didn't have all the ingredients hence the metric measurements, I'm strictly imperial.


Plans for tonight include a shop bought pizza with salad and some TV although I'm not sure what, yet. I suppose I ought to dig out our festival macs for our day out tomorrow, the rain looks set to stick around.

Having now been out there and experienced town centre life, I'm more concerned about pissed-up blokes than I am by coronavirus. I did say that I wasn't interested in going to the pub but I must admit I was tempted to nip in for a cheeky pint when I walked past on my way back home. Maybe next week.

Email ThisBlogThis!Share to TwitterShare to FacebookShare to Pinterest
Labels: Books, ebay, Gardening, Hair, It's All About Me, Pets