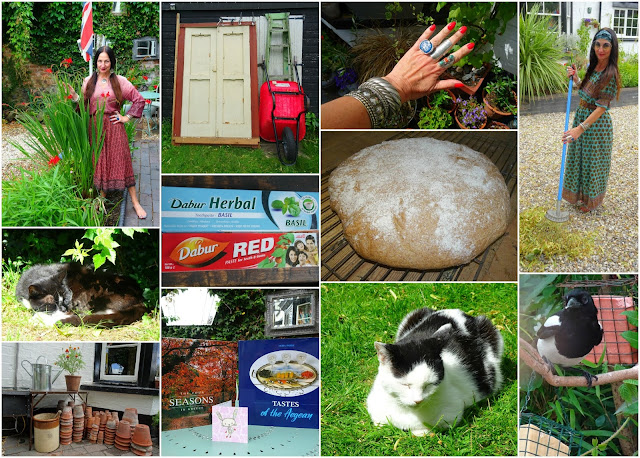 I was astounded to look over at the alarm clock on Saturday (day 106) and discover that it was after 8am, no wonder the cats were pacing up and down the bed like caged tigers. I blame Huey Morgan for keeping us up late - we spent three weeks in the northeastern state of Bahia in Brazil back in 2001 and it was wonderful to revisit some of the places we hung out in the state capital, Salvador, in his BBC4 series Latin Music Adventures.


By way of a change Jon got up first, fed the lads and brought mugs of tea back to bed where we lay reading until after 9am. 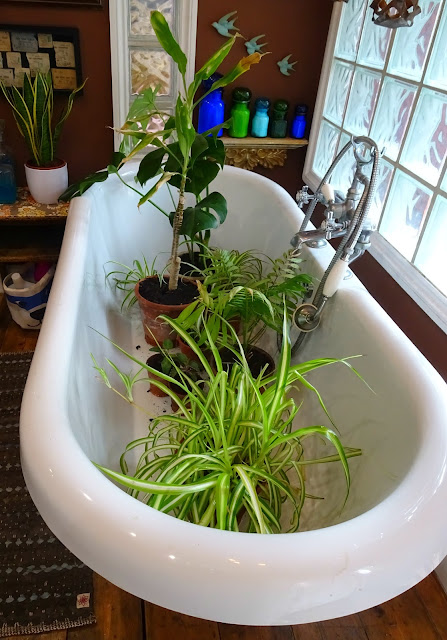 Jon went downstairs to start breakfast while I stripped and changed the bed. I loaded the machine and joined Jon at the kitchen table for veggie sausage sandwiches. After we'd eaten I put back the plants I'd left soaking in the utility room sink and bath overnight and pegged out the laundry. 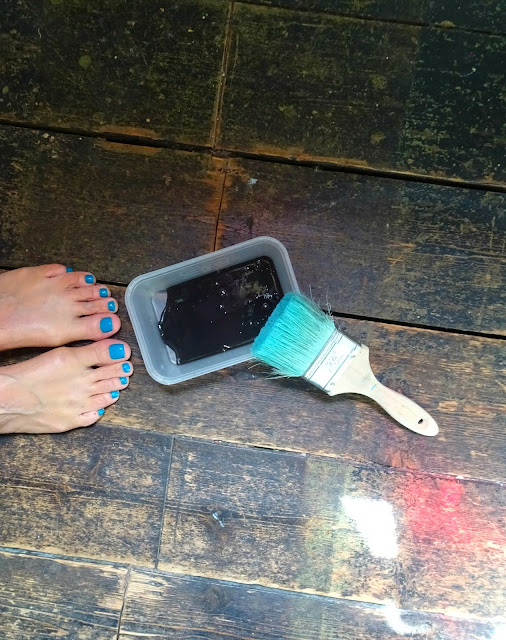 Once dressed I stained the floorboards at the top of the stairs (the stairs I'd done yesterday were putting them to shame) then swept the patio as, once again, it was covered in debris from the lime tree. Ebbie was also covered in the stuff so Jon washed her, moved her away from the offending tree and covered her over. With the area of drive on which she'd been parked empty I raked the gravel and deposited the sweepings into the compost bin. 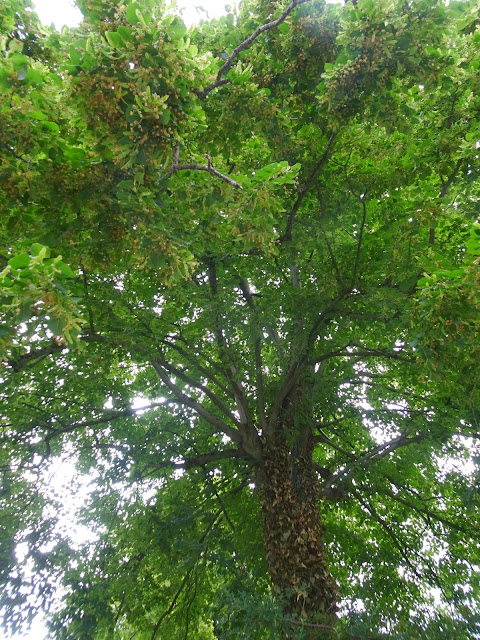 The dreaded lime tree, all one hundred foot of it. Okay to look at, not so much fun to live with!

Finally, the crocosmia has burst open! It's almost as tall as me. 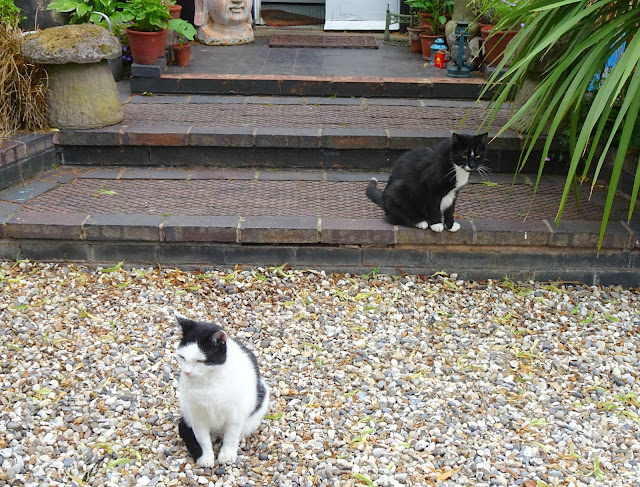 This pair can't let Jon out of their sight. 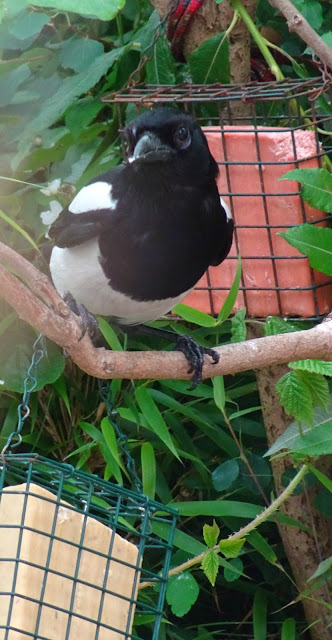 Here's a resident of our garden you haven't met before, our tail-less magpie. I'm not sure what happened to him but we did find a pile of feathers at the bottom of the garden a couple of weeks ago so I can only assume he escaped Stephen's evil clutches. He can fly - but in a very ungainly fashion! 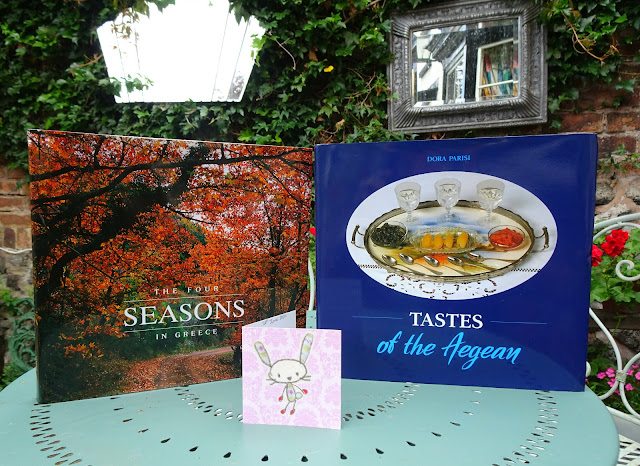 The postman arrived with two gorgeous books from Lynn & Philip, they'd been donated by a neighbour for the book pile they have outside their house but thought we'd appreciate them more - we do. There's some very tasty veggie-friendly recipes I might try out this week. 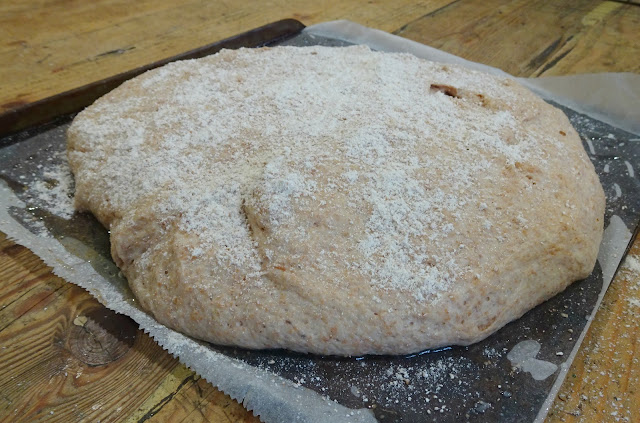 Saturday seems to be breadmaking day lately and Jon decided to make one of his Roman spelt loaves. HERE'S the recipe he uses (neither of us has ever watched the TV show, we avoid cookery programmes like the plague). Although it says to use white spelt flour he prefers the wholemeal variety and it works just as well. 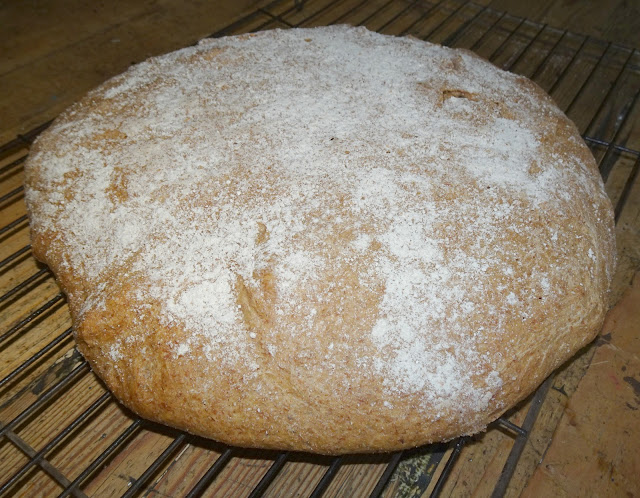 You might have noticed that I've finally got round to creating a list of blogs I follow in my sidebar. These are written by fabulous women who comment regularly and keep me entertained with their own blogs, keeping the sense of community - which I've always loved about blogging - alive and well. 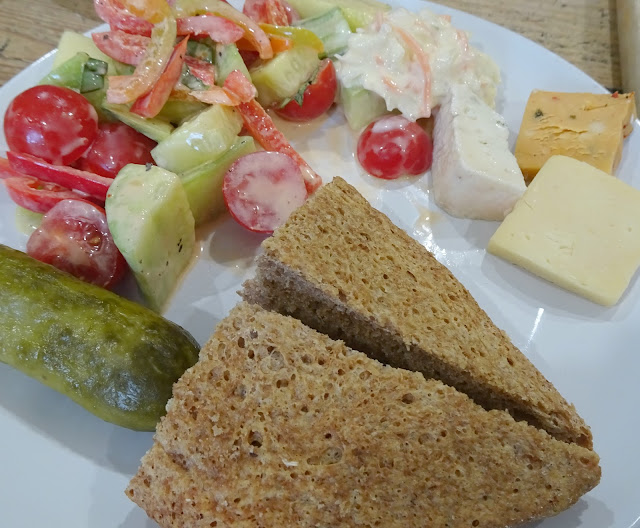 Tea was freshly baked bread with salad, cheese and the largest gherkins known to man (they're a Turkish brand called Bodrum, bought from Johal's). We spent the evening - on Annie's recommendation - glued to Scotland's Home of the Year watching six episodes back-to-back on the I-player. As it was Saturday night rum and cola was consumed. Who needs the pub?

This morning I woke at 7am, let the lads out and brought tea back to bed where we lay reading until 8.30 and I finished the Fred Vargas I started last week (what a wonderful writer, her characterisation is utterly fabulous). We watched The Andrew Marr Show, ate toast and I painted my nails.

When I went upstairs to clean my teeth I discovered with horror that we were almost out of toothpaste. I thought I'd bought three tubes back from India but it turned out that it was only two, one more squeeze and it would all be gone.

For most of last year we'd used a plastic free product from &Keep called Truthpaste but an order would take a few days to arrive so Jon went down to Johal's as he'd remembered seeing our favourite ayuervedic brand, Dabur, on the toiletry self. We usually use Red, I'm excited to try Basil. 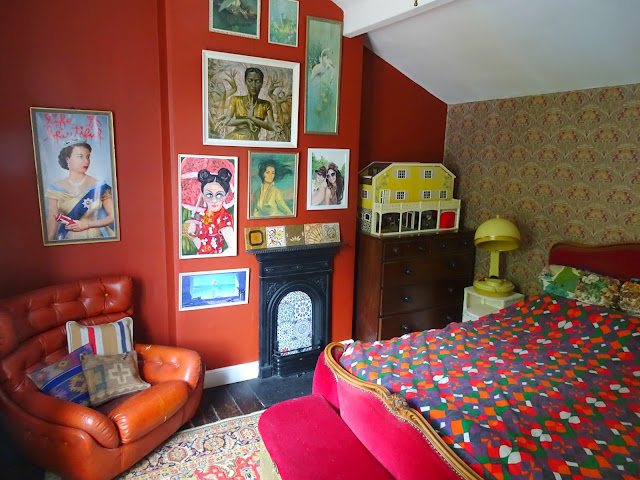 Before I got dressed I cleaned our bedroom, which once again was covered in a layer of  dust. 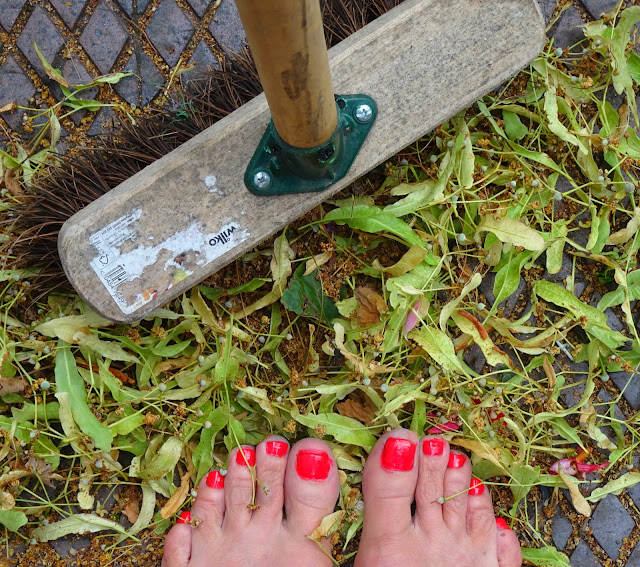 With the blustery conditions the UK is currently experiencing, the debris from next door's lime tree is a complete nightmare. With my daily sweeping up, I'm starting to feel like King Canute and his battle to stop the tide.

While I swept, Jon and the lads headed to the shed to dig out the front of the cupboard that used to be in the third bedroom before we turned it into a bathroom. It had been in the shed for over a decade and involved a lot of huffing, puffing and choice language to get it out. 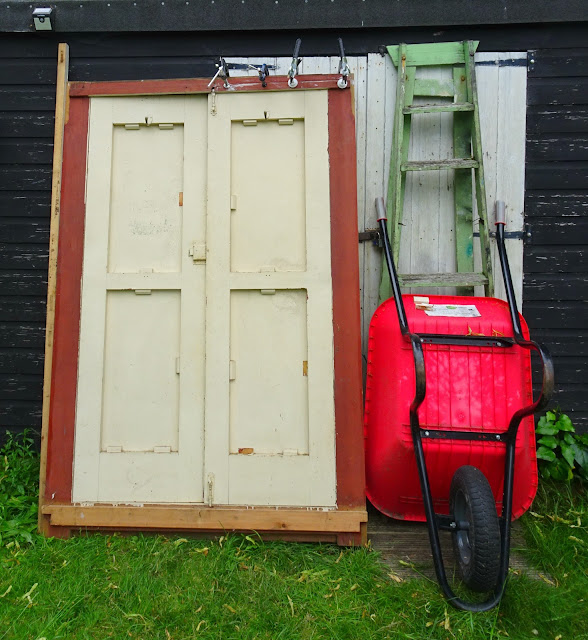 Glued together and held into place with clamps, Jon's got a cunning plan.... 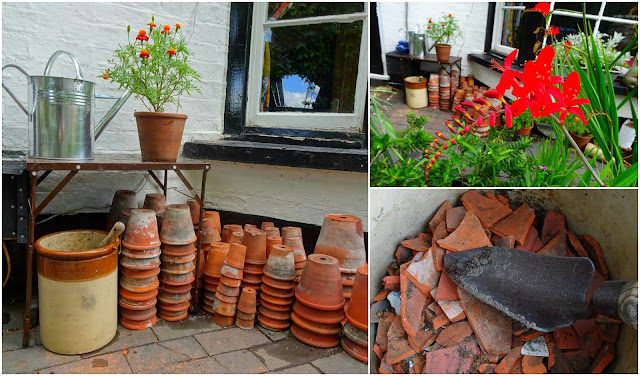 While the shed was open I spotted the vintage metal camping table we'd bought from a car boot sale years ago. Normally it forms part of our camp kitchen at festivals and, rather than leave it gathering dust in the shed, I've decided to use it as a potting table. I've moved the terracotta pots every day this week to sweep underneath them so it was hardship to do it again to squeeze in the table. The antique earthenware pot had been festering under a bush for years, I dug it out and filled it with the broken crocks which we use for drainage in our potted plants. While I was moving the pots I found a few chipped ones and had a lovely time smashing them to bits with a hammer. Such a satisfying job! 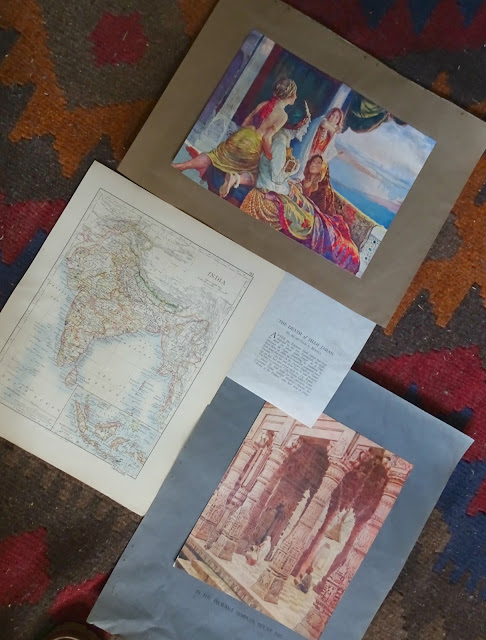 Also in the shed I found an envelope addressed to our old house and postmarked 2003. I must have bought these old colour plates from eBay and promptly stashed them away, forgetting all about them. The picture entitled The Death of Shah Jahan has him surrounded by exotic princesses, staring wistfully out from his prison cell within Agra Fort to the Taj Mahal across the water. We stood on the same spot in January, 2019.

Although the forecast was for a miserable, wet weekend other than the blustery wind, the weekend hasn't been bad at all. There was no rain and, when the sun came out from behinds the clouds it's been deliciously warm - when they've not been stalking mice or, in Stephen's case, chasing birds, the lads have been basking on the lawn. 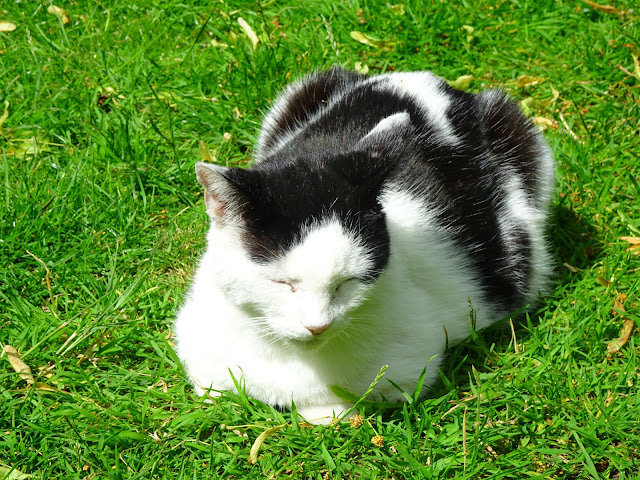 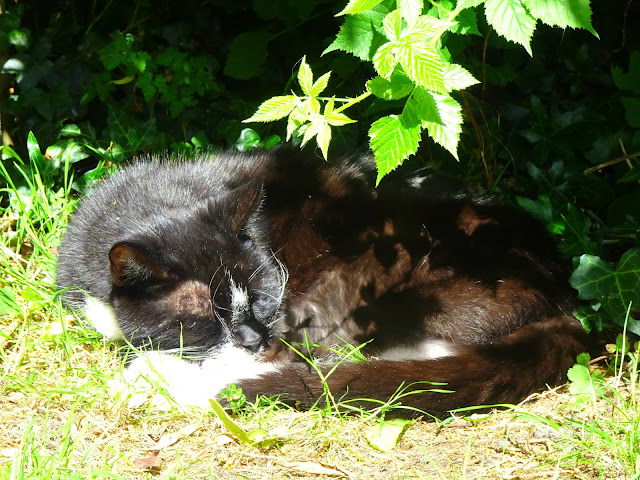 Jon gave the veg plants a liquid seaweed feed whilst I grappled with the hosepipe and gave the patio plants a thorough soaking. 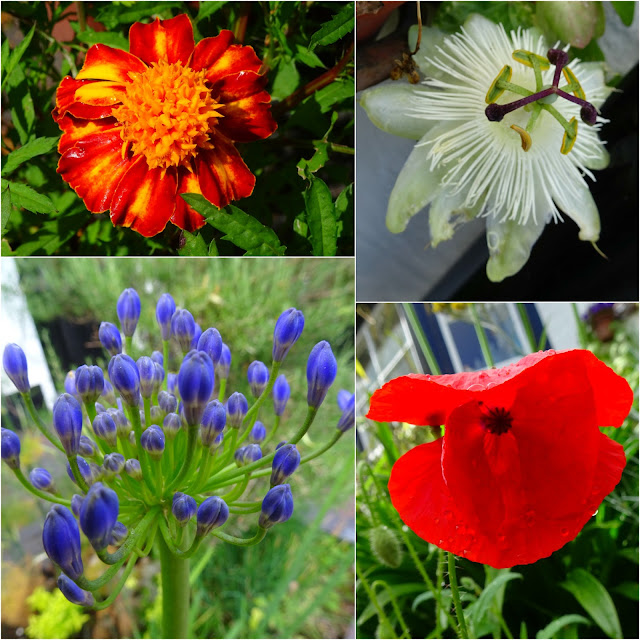 The agapanthus have finally started to unfurl, four are out and I've counted another seven buds. The passionflower has made an appearance, such a weird looking thing. 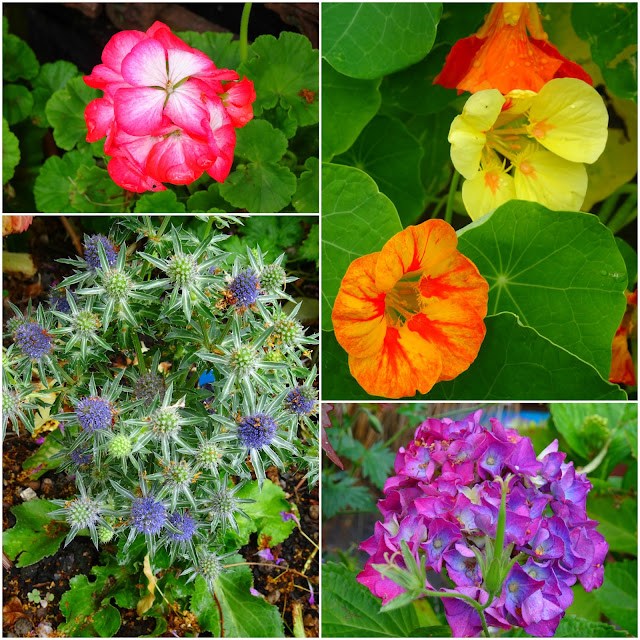 The sea holly is on its way, the hydrangeas are looking gorgeous, the nastursiums fill me with joy every time I catch sight of them, as do the geraniums. 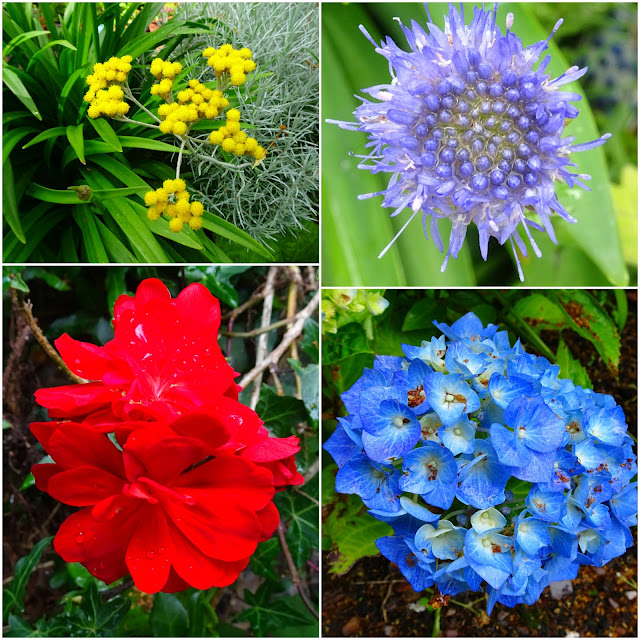 Tonight we're having jacket potatoes with baked beans and grated cheese, a proper old school tea. We'll be watching more of Scotland's Home of the Year before the mesmerising The Lumineries at 9pm.

Email ThisBlogThis!Share to TwitterShare to FacebookShare to Pinterest
Labels: Agra, Food, Fun With Bloggers, Gardening, It's All About Me, Jon, Our House, Pets