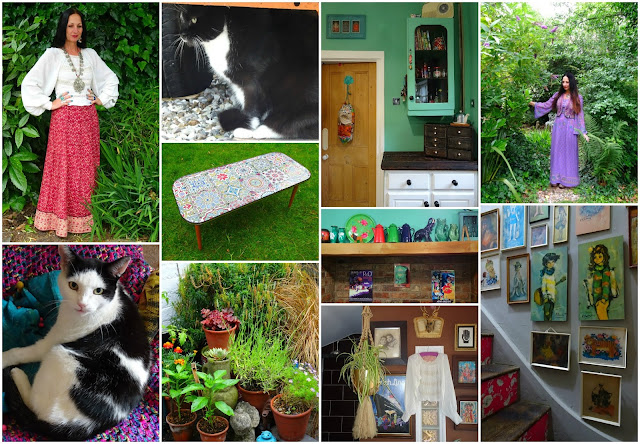 On Thursday (day 104) I was up just after 6am. I caught up with blog comments, did my daily Wii Fit and took a mug of tea upstairs to Jon. The weather couldn't seem to decide what to do. After a fairly sunny start the sky had clouded over and we'd had a couple of short, sharp showers. Once we'd eaten our fruit & yoghurt I'd resigned myself to a day of pottering around the house. 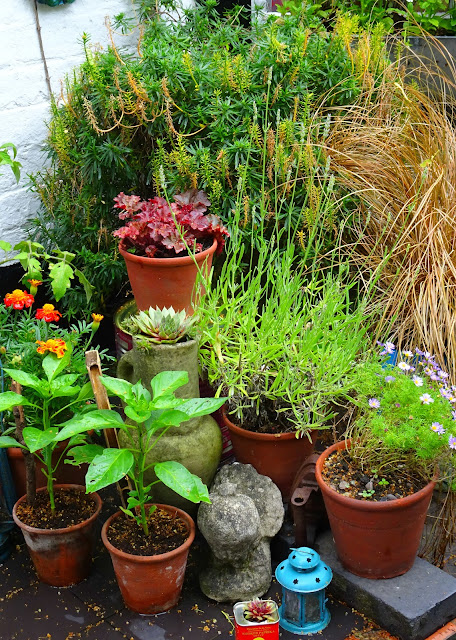 I'd planned to paint the legs on the kitchen cupboard but after talking it through, we decided to stain them instead and, as the wood stain was at the back of one of the sheds, Jon said he'd do it after he'd been on the weekly grocery run. 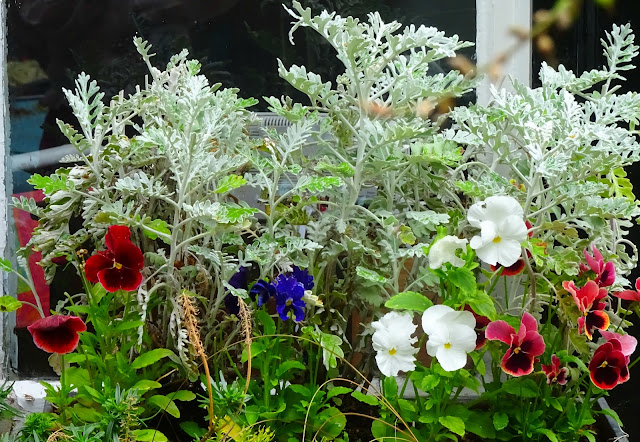 I got dressed and swept the dining room rugs and the stairs then, as the sun was back out, swept up the debris from the lime tree & watered the patio plants. Needless to say that the minute I'd finished it decided to rain. 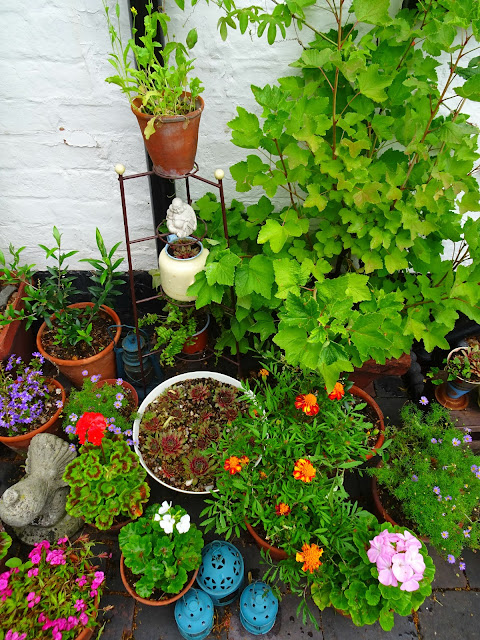 The postman arrived with a parcel. I've been on a quest for the perfect white summer blouse for years, I'm forever buying them in charity shops and am never satisfied when I've tried them at home, modern ones seem to cheapen the vintage clothes I wear with them. When I spotted this 1970s Ayesha Davar cheesecloth beauty up for auction on Ebay, my heart skipped a beat & I knew she was the one for me. Ayesha Davar clothes can fetch £££s so I was thrilled to win it for significantly less than my top bid. 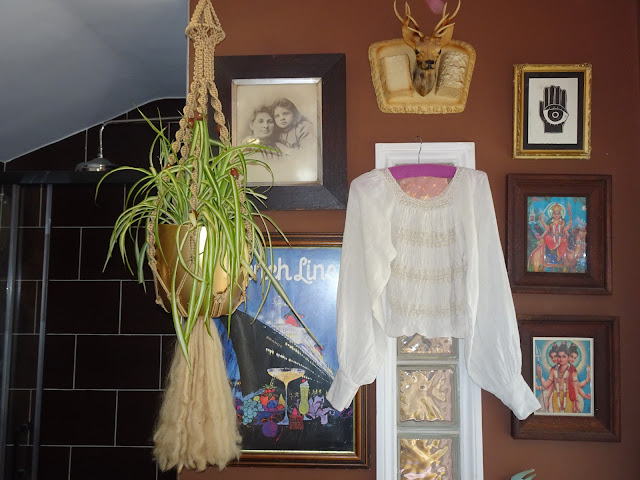 Back from his shopping expedition, Jon found the woodstain and sorted out the cupboard's new legs,  salvaged from Project Coffee Table. This cupboard started life as a deadly dull unit from Ikea's Clearance Corner in 2007, we've used planks from the pallet stash to hide the laminated sides and jazzed them and the doors up with my DIY chalk paint. The work surface used to be the top of the coffee table. 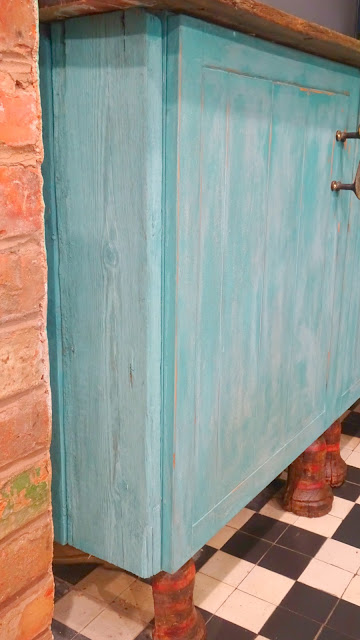 After our lunchtime noodles, the rain had mercifully eased, I spent a few hours in the garden, watering & weeding the veg patch and pinching the tomato plants' side shoots - thanks for the tip, Annie! Meanwhile Jon continued working on the electrics in Gilbert (a never ending job.)

I decided a bit of self-care was in order. Before lockdown & unsure as to whether online shopping would be available, I'd stocked up on a couple of different brands of semi-permanent hair dye in the darkest shades left on the shelves. The first one I tried (Clairol's Natural Instincts in Black) had been disappointing, if I followed the instructions and rinsed the dye off with water my hair felt sticky and my roots needed redoing within three weeks. Unable to stand the blonde/silver stripe running down the middle of my scalp any longer I tried L'Oreal's Castings in Dark Chocolate. The dye rinsed off with water without any problems and my hair does feel lovely. The conditioner, which I never normally use, smelled absolutely gorgeous. Let's see how long the colour lasts. 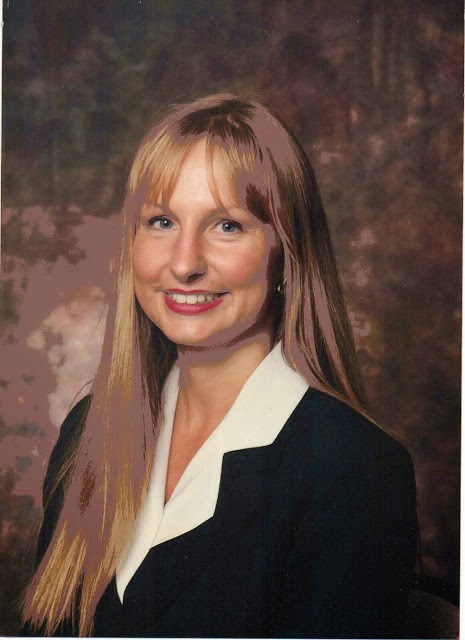 Please don't tell me not to dye my hair, I might have been born blonde but I can assure you that I've had a lot more fun since I took to the bottle back in 2006.

Tea was salad with cheese and a slice of spelt bread drizzled with olive oil. Jon was already nodding off by 7.30pm so rather than risk him missing something good we decided to watch whatever was on normal TV which turned out to be The Antiques Roadtrip & Ambulance. 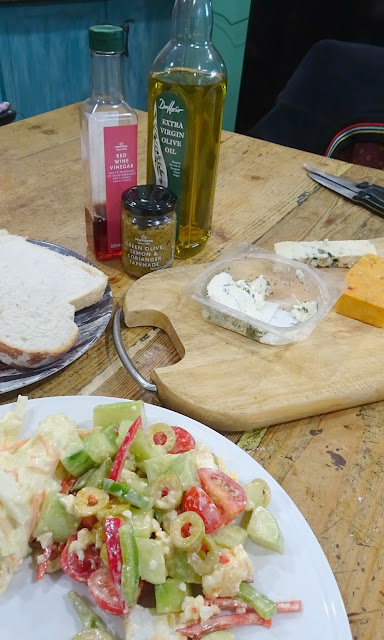 Friday morning rolled around again (our fifteenth since lockdown began) and I was up at just after 6am again. Despite the rain, the lads seemed quite happy to venture forth, possibly to discover why the birds had been making an unholy racket since dawn.


After my last Wii Fit session of the week I loaded the washing machine with tea towels, dusters and towels, resigned to the fact they'd have to hang up to dry in the utility room as the rain looked set to stay for the rest of the day. After our fruit & yoghurt breakfast I placed an online order with Superdrug for some replacement toiletries, hung up the washing and threw the rest of the contents of the laundry basket into the machine before getting dressed. 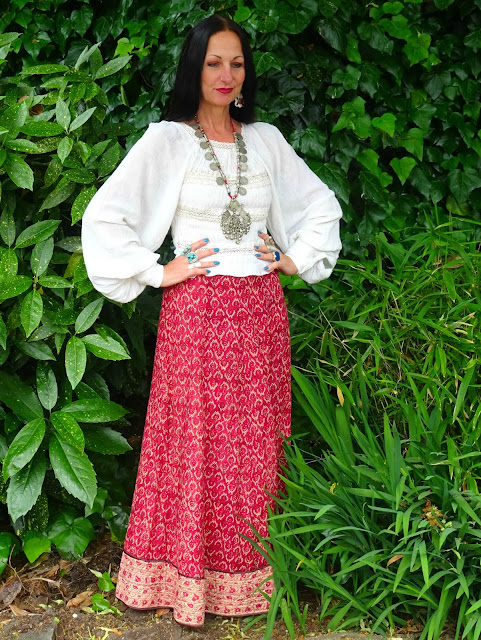 I'd hand-washed my new-to-me blouse after I'd unwrapped it yesterday, adding a capful of white vinegar to the final rinse as it had that terrible perfumed washing powder smell I hate. As it was dry, it seemed a shame not to wear it.

We'd decided that we wanted a wooden top for the Welsh dresser base in the kitchen and Jon, rather than facing the hoardes at B&Q (and spending money!), decided to search the woodpile for something suitable, deciding upon one of the Edwardian panelled doors we'd liberated from a skip. 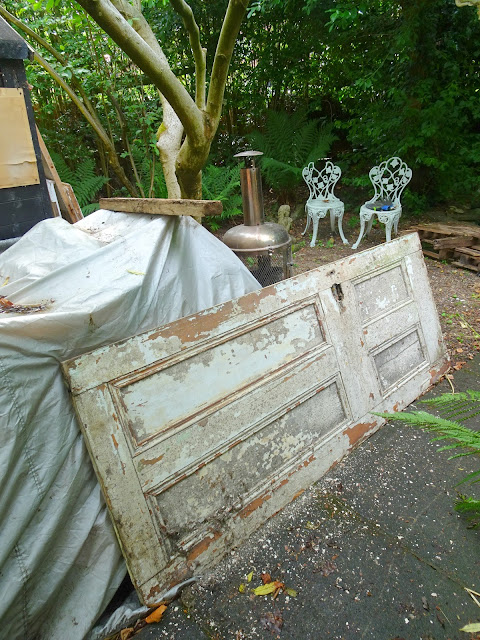 Taking advantage of a break in the rain, Jon cut the door to size, sanded it down and stained it. As the wood stain was in easy reach I decanted some into a bowl and redid the stairs as I'd noticed when I swept them yesterday that they were looking worn out in places. 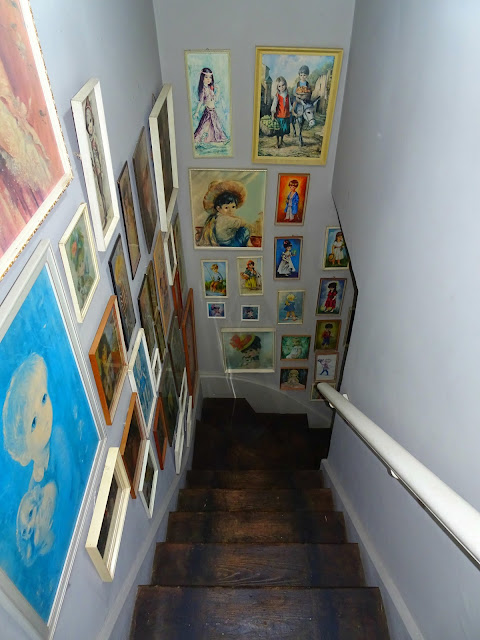 I told the lads not to use the stairs while the wood stain was drying, typically I was the only one who forgot! 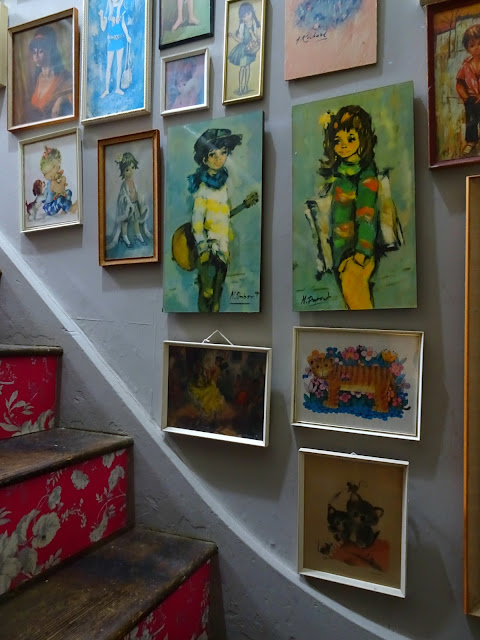 After our lunchtime noodles Jon gave the new worktop another coat of woodstain blasting it with a hairdrier to speed up the process. He needs to box in the pipe (visible on the right of the photo) and do a bit of tiling and then that corner of the kitchen is finished. 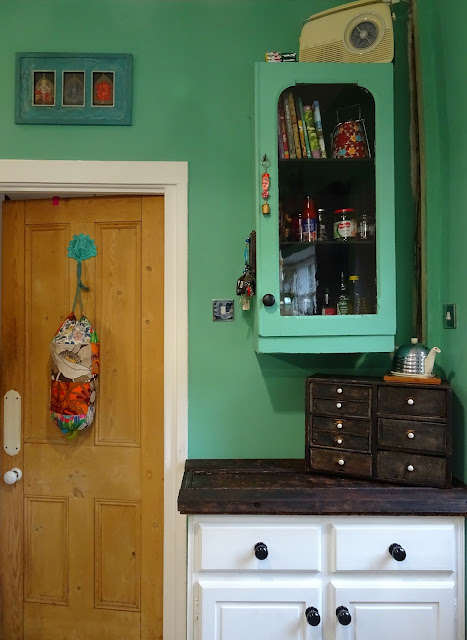 Over the last week I've added a Rajasthani painted wood peacock, a Kashmiri enamel tray and a Raj-era slide rule to my railway sleeper shelf. The slide rule was supposed to be one of Jon's birthday presents next month but I thought he needed cheering up while he was suffering with his back. 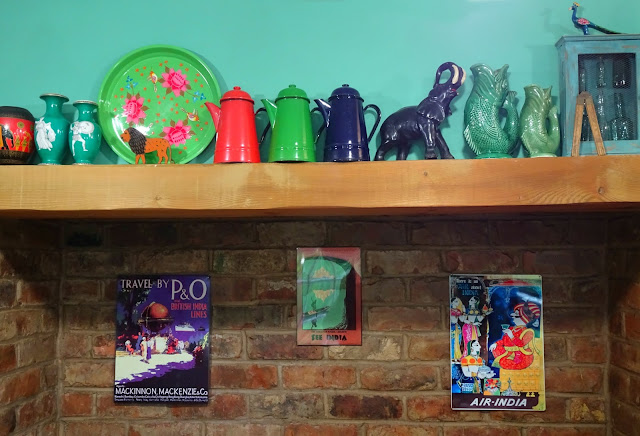 Always happy for an opportunity to use his power tools, Jon got the drill out and hung our retro tin signs. I've had that P&O tin sign for years, it used to live in the garden. The other two are new (to me), Ebay finds I couldn't resist! 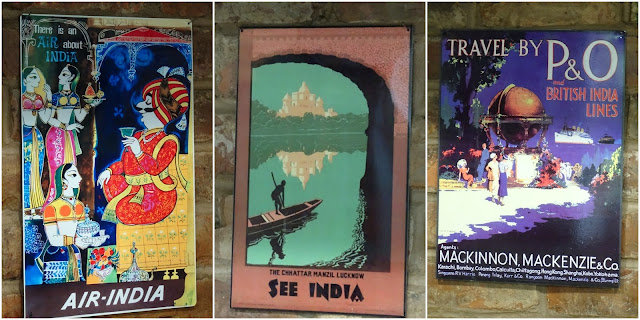 Meanwhile I also had a project to be getting on with. 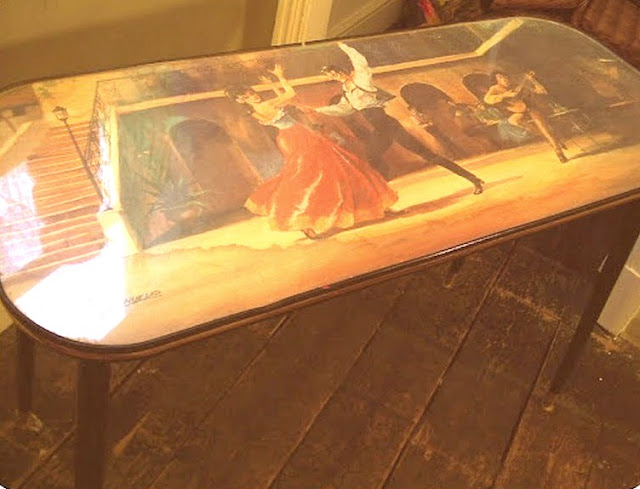 We bought our Spanish occasional table from a jumble sale years ago. With handy screw-off legs it was perfect for taking to vintage fairs but sadly, the wonderfully kitsch top was ruined when the shed roof collapsed in the rain last month. 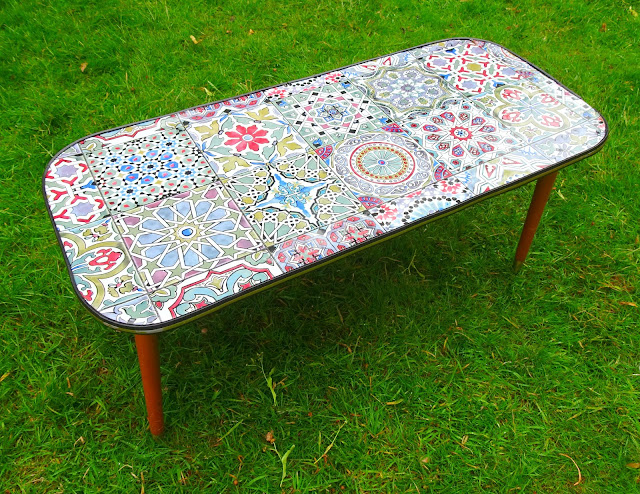 Hooray for sticky-backed plastic! Click HERE for the eBay seller I buy mine from (other sellers are available but this one despatches really quickly and wraps it well.) 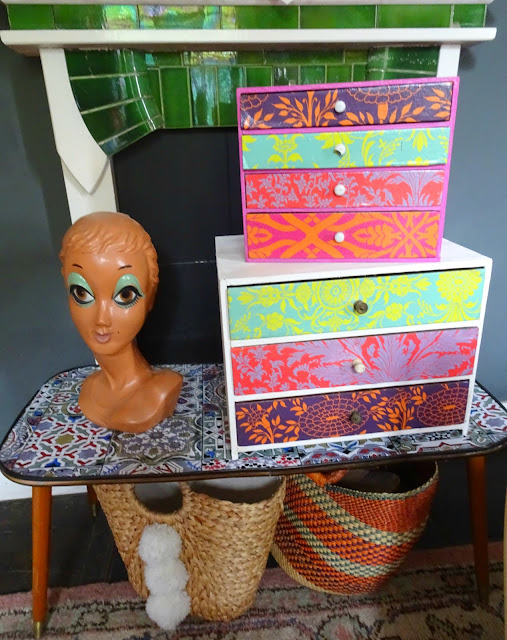 In the absence of any vintage fairs for the foreseeable future it'll live in the spare room. I'm not risking a leaky shed again. 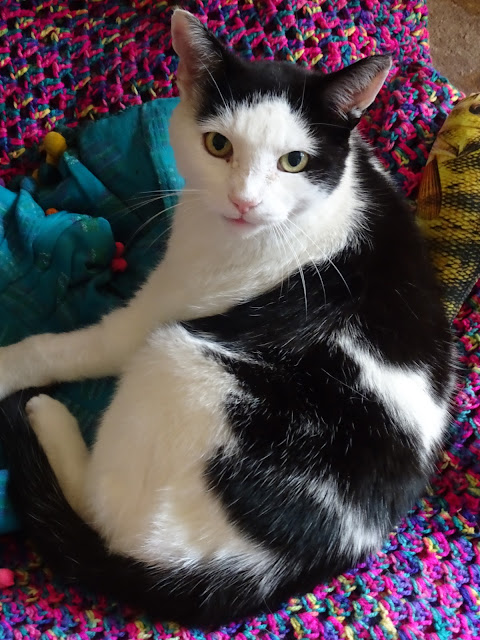 Stephen's still outside watching the mice in the rain. Frank's a lot more sensible, snuggling up on his blanket in the warmth. 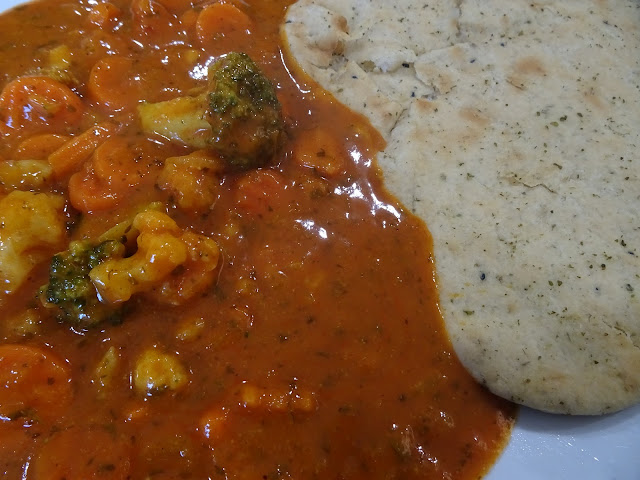 Tea was vegetable tikka massala with garlic & coriander nan and potato wedges (for Jon). It's Friday which means rum and cola is on the agenda. I'm not sure what tonight's viewing pleasure will be although Gardener's World is on at 8pm and Bettany Hughes' Greek Odyssey is on a hour later.