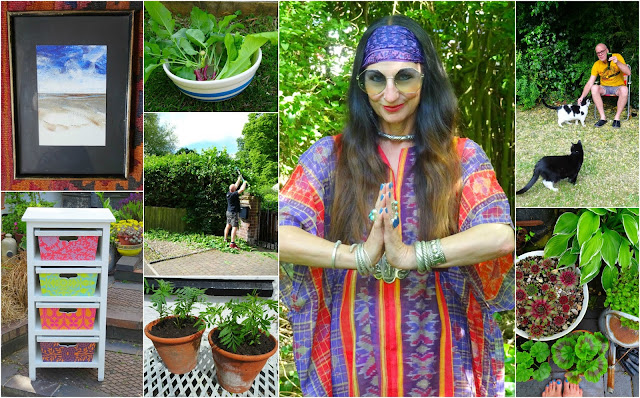 Yesterday (day 66 of lockdown) I was up just after 6am, too excited by the sunshine streaming through the curtains to waste another minute in bed. I emptied the contents of the washing basket into the machine and hand-washed a couple of delicates. After a Wii Fit session, I pegged out the washing and caught up with blog comments until Jon got up. Unable to find yoghurt on his shopping mission the previous day, we had porridge with bananas and honey for breakfast. 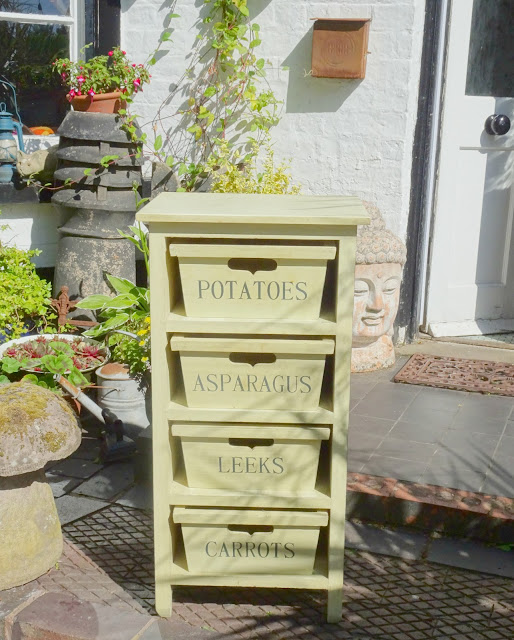 Once dressed Jon went round to Tony's for a shopping exchange as he'd got him some coffee pods for his machine and, in turn, Tony had sourced some real ale & halloumi. I put on my bikini, slapped on some sun cream and headed outside to crack on with today's project - transforming our old veg rack into a storage unit for the utility room. 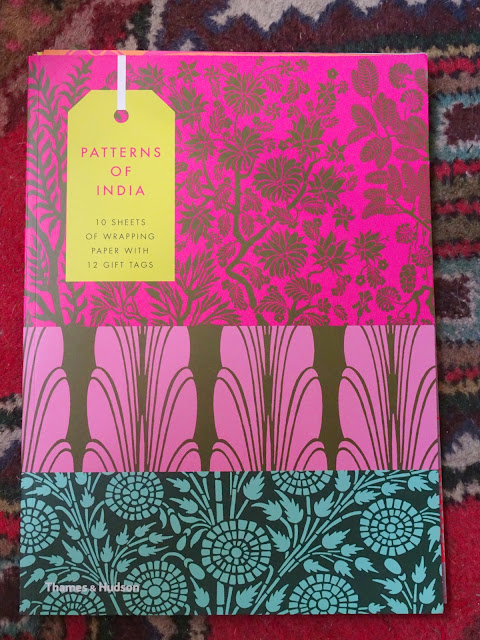 By the time I'd sanded it down and given it a couple of coats of paint, Jon was back. After our noodles, I traced a cardboard template from the front of the drawers and Jon cut some Indian-inspired wrapping paper from this amazing book G&T bought me a couple of years ago. 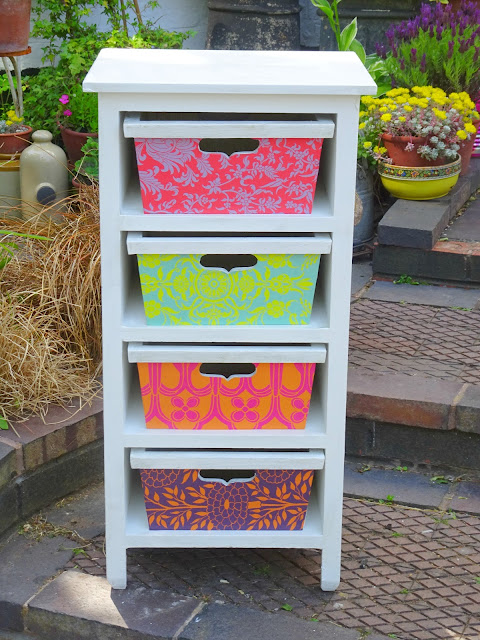 Once the drawer fronts were glued into place I gave everything a coat of varnish and left it to dry in the sun before filling it with vintage tea towels and the rest of my kitchen paraphernalia. 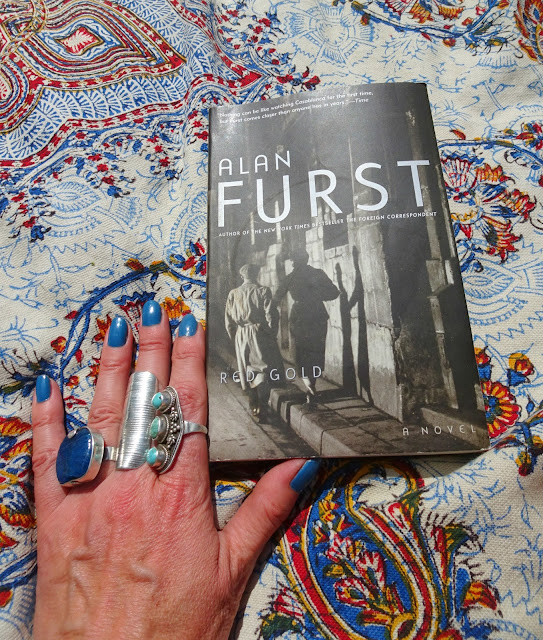 The rest of the afternoon was spent lying on the lawn reading in the sunshine with the lads. Alan Furst, if you're not familiar with him, is the master of the WWII European espionage novel, a cracking read. 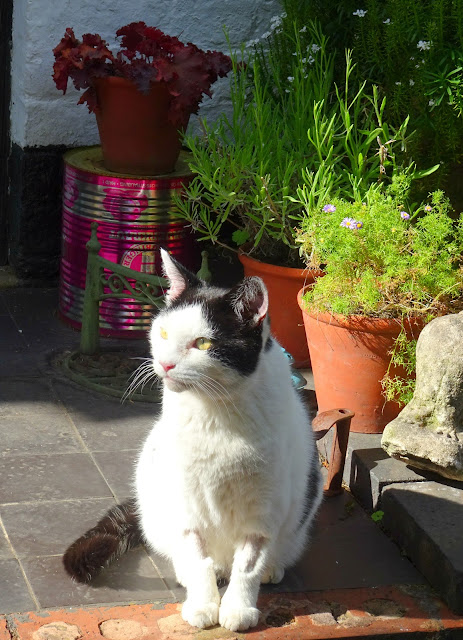 Talking of lads,  Frank's mouth is pretty much healed, his shaved patches from his canula and blood tests on his front legs may take a little longer. 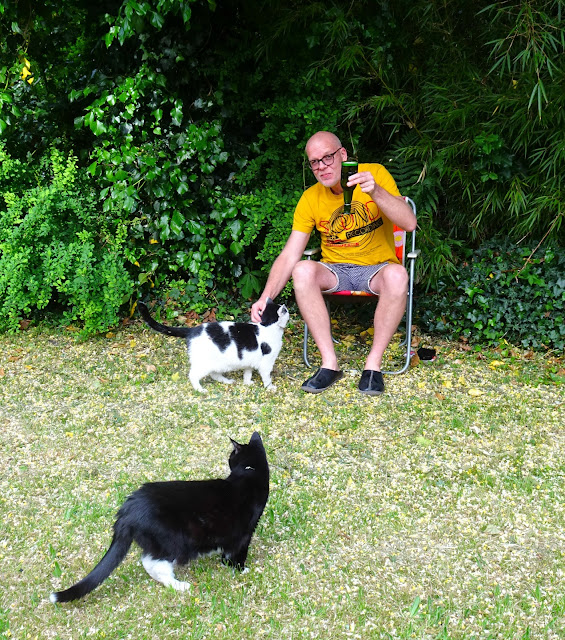 Tea was halloumi with roast vegetables followed by a cheeky beer in the garden. 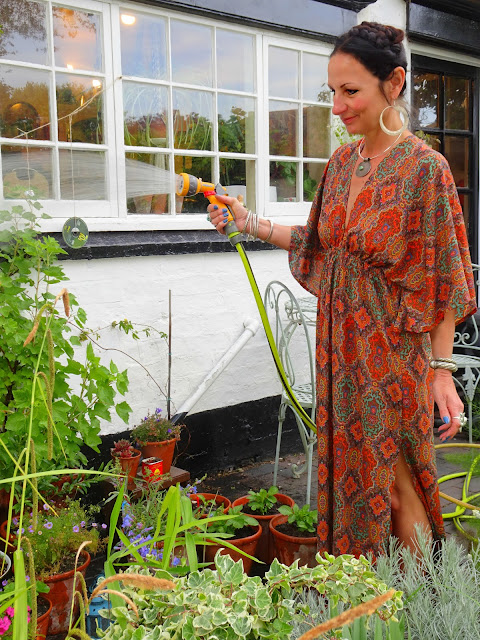 Once the temperature had dropped we watered the veg plot, the greenhouse and the patio plants and then retreated to the house for Grayson Perry's Art Club. Jon had a tune in his head so left me to watch Jay Blades' DIY Show on the i-player while he retreated to his music room. I picked up some great tips on subjects as diverse as planting beans and mending a dripping tap. I took my book to bed with Jon joining me later. 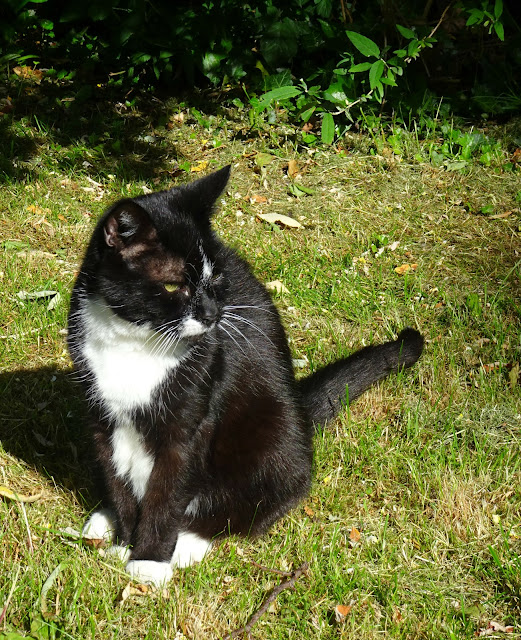 Tuesday (day 67) started, as all weekdays do, with a Wii Fit session. Stephen Squirrel celebrated his 15th birthday today and obviously, I had to sing to him. He doesn't look particularly impressed and if you've ever heard me sing you'd probably agree. 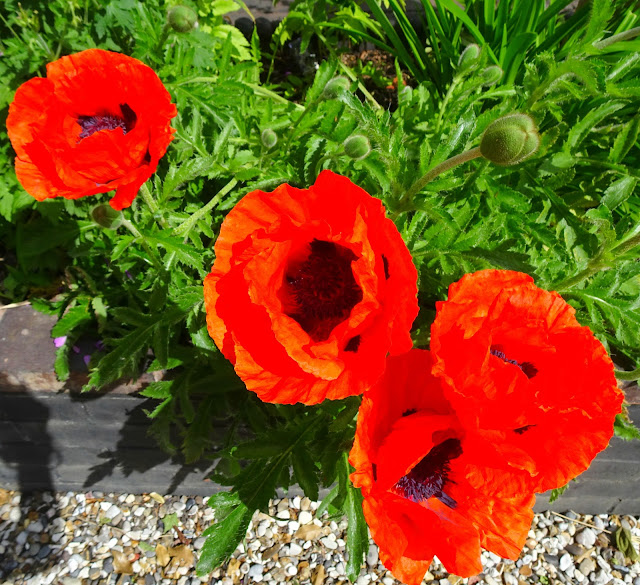 I caught up with blogland and popped outside to marvel at the four Oriental poppies that had bloomed overnight. When Jon got up we ate fruit and yoghurt (which he'd managed to find in a corner shop when he popped round with Tony's shopping yesterday) and Frank had the last of his medication. 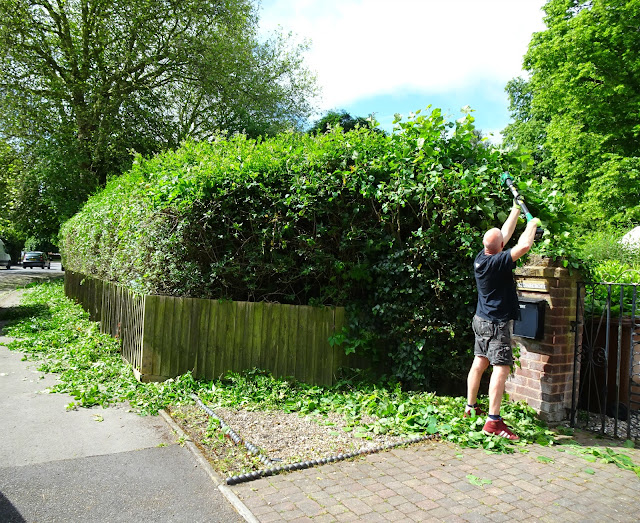 Once dressed Jon's task for the day was to trim the hedge, all 100 metres of it, after checking thoroughly for nesting birds before he started. 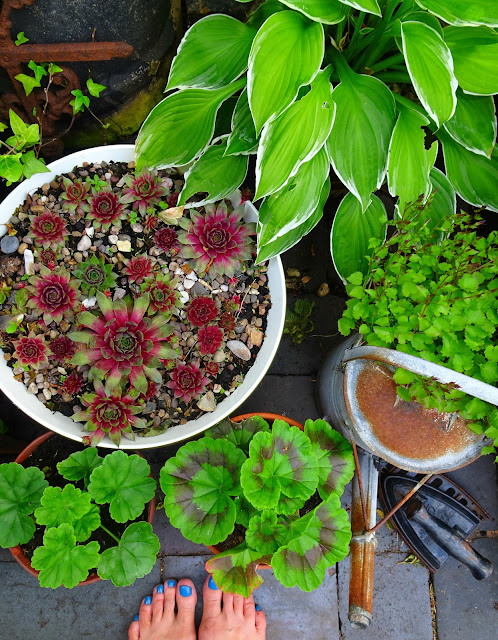 I watered the patio plants and, as Mark had just popped round with the marigolds he'd offered us last week, potted them up. 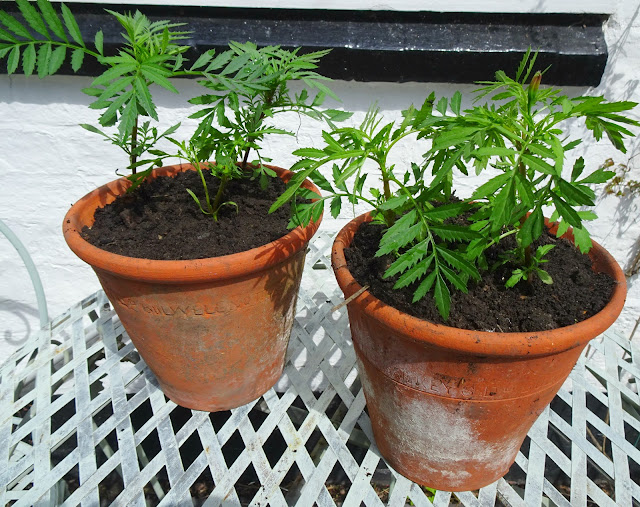 Then I thinned out the purple sprouting broccoli and turnips in the veg patch. I hate thinning out plants we've lovingly grown from seed, so much so that I've rescued the discarded ones and planted them elsewhere in the faint hope they'll survive.

I noticed with excitement that our radishes were finally ready to eat. Jon & I sampled one and it nearly blew our heads off, those shop-bought ones don't compare!


Jon took a break from his hedge trimming for some lunchtime noodles, bringing in today's post. 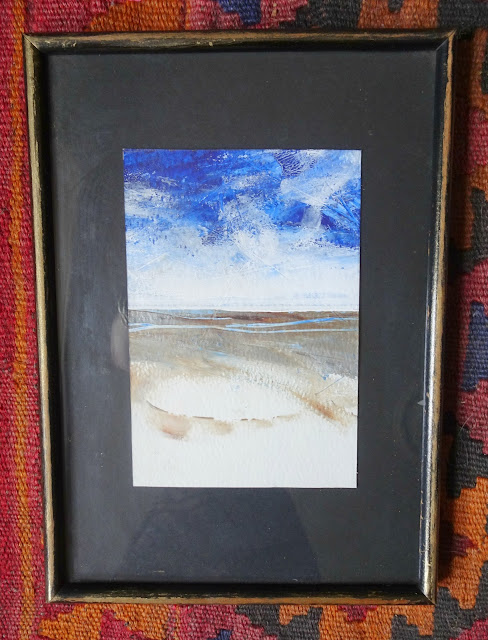 Last week artist Elaine Phipps had offered a giveaway on Instagram and I was lucky enough to win a piece of her original artwork which was in today's post. Isn't it gorgeous? After lunch, I had a rummage around upstairs and found this vintage frame which I sanded down, gilded (with gold shoe cream), mounted & framed my new print and hung it up in the bathroom. Check out her work HERE. 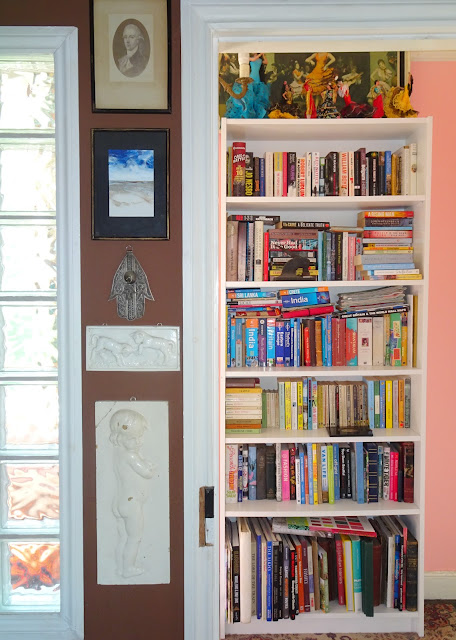 I helped Jon sweep up the hedge trimmings and we crammed as much as we possibly could into the garden waste bin which had been emptied yesterday, piling the rest up to hopefully shrink down in the heat. Several of the neighbours congratulated Jon on his Herculean task. Hopefully, that'll be it for a few months now! We spent the rest of the afternoon basking in the sunshine with the lads and then we harvested some of our crops for tea. 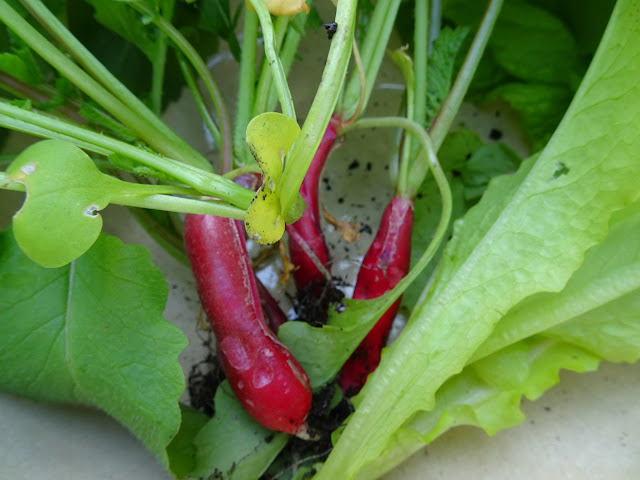 Elaine's artwork wasn't the only exciting thing I received in today's post, 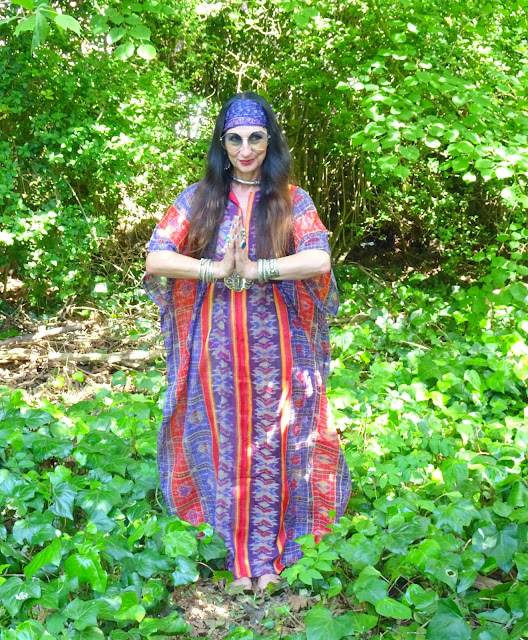 There was also this amazing 1960s Indian-made Ikat kaftan I'd stalked on eBay, never in my wildest dreams expecting to win it for a reasonable price.

It must have cost a small fortune back in the day. 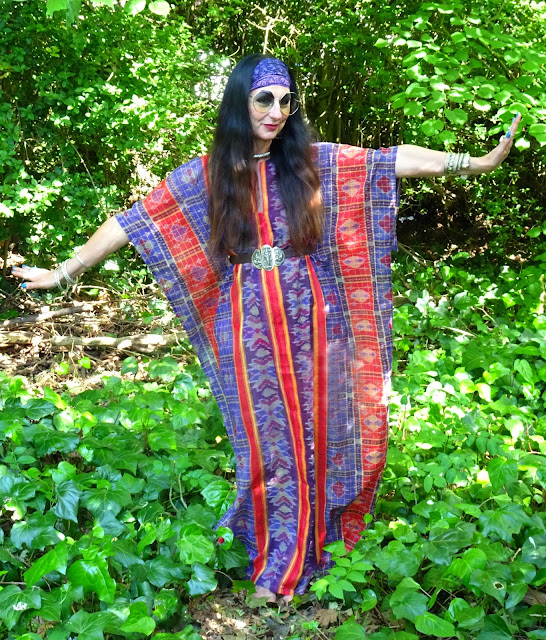 If, and that's a big if, we do get to visit Greece in September it will be coming with me, but if that doesn't happen I'll be happy to swank around the garden in it all Summer long. 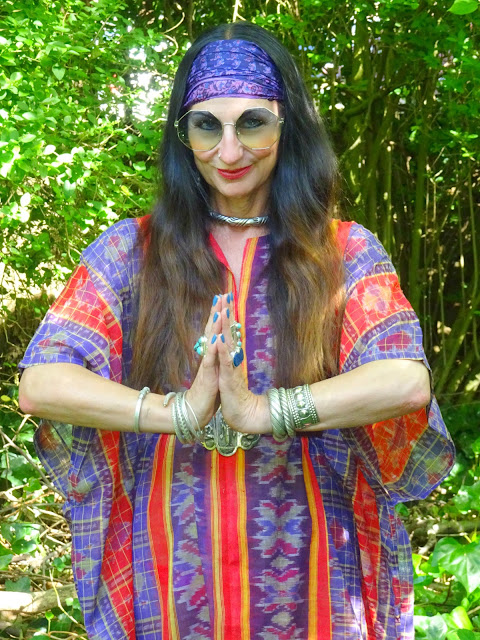 Tea was half a flatbread each with cheese & salad (including lettuce and radishes from the garden!) 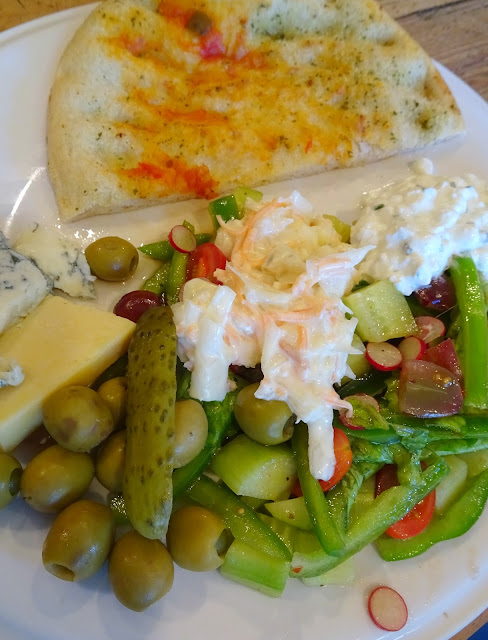 Tonight we'll be watching the new series of A House Through Time with historian David Olusoga, if you've never seen it then imagine Who Do You Think You Are? for buildings. It's utterly absorbing. That's if Jon can stay awake till 9pm, the poor sod's knackered! 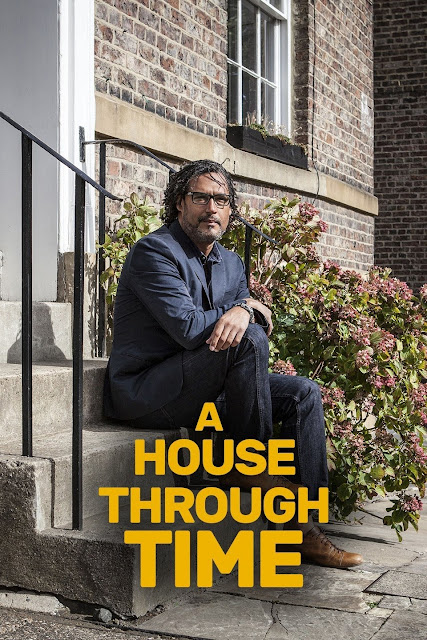 Stay safe, stay healthy and keep being fabulous!
Posted by Vix at Tuesday, May 26, 2020