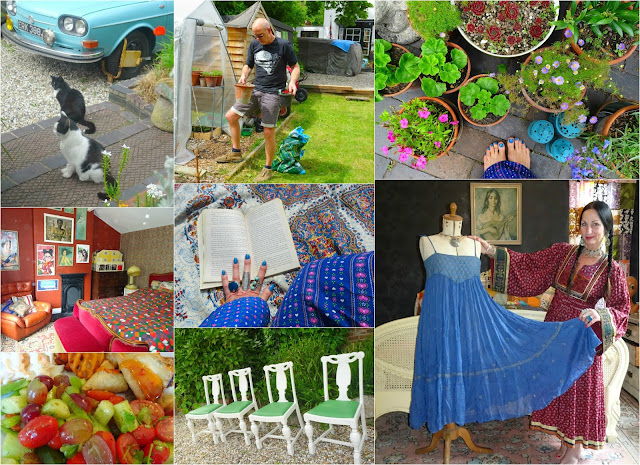 On Saturday morning (day 64) I awoke to the sound of a cat purring loudly and, when I looked across the bed to check the time, saw Frank wedged into Jon's armpit. Somebody was feeling better! It was only 4.45am and I managed to get back to sleep for an hour or so then, wide awake, selected a book from the pile next to the bed and started reading. When Jon woke up he saw to the lads, made tea and brought it back to bed where we stayed till 8am. 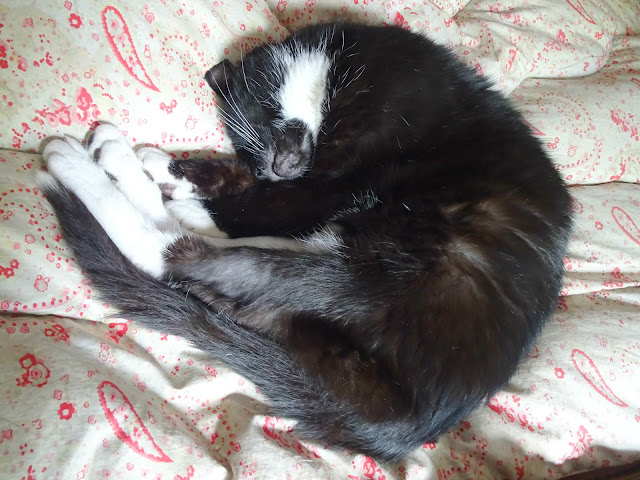 Jon went downstairs to start breakfast & to administer Frank's medicine while I stripped and changed the bed, gave the bathroom plants their fortnightly feed, loaded up the washing machine and fed the houseplants downstairs. 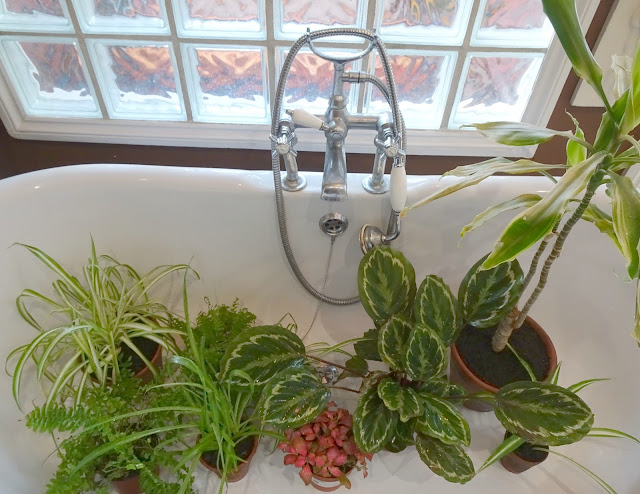 After a coffee, I dusted and swept our bedroom before sitting at the kitchen table and devouring a veggie sausage sandwich and a second mug of tea. 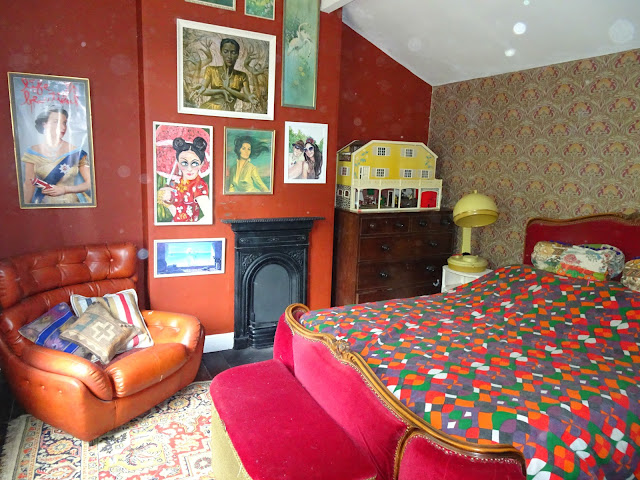 Before getting dressed I cleaned the bathroom. 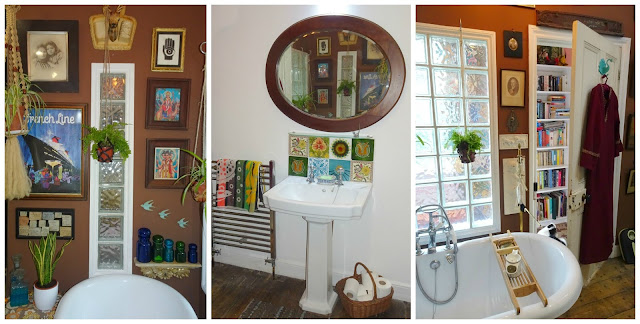 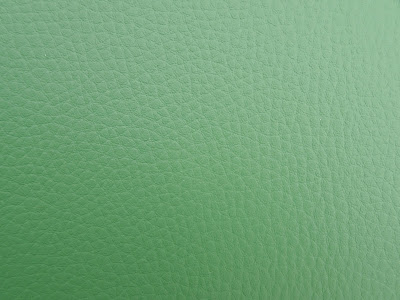 I gave the patio plants their fortnightly feed and sat at the PC browsing the internet with a mug of tea. Claire had received her parcel and had shared a photo of her repaired Anokhi harems on Facebook. 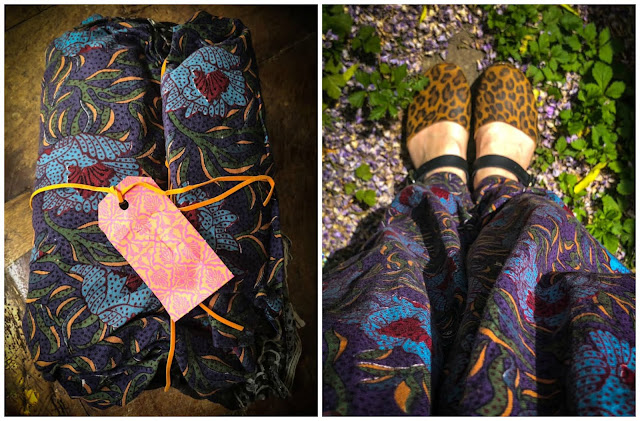 The postwoman saw me through the window and indicated that she'd left a parcel on the step. I excitedly ripped it open and discovered the wounded Indian cotton dress I'd bought as a project from eBay last week. The seller had been extremely honest about the condition of the dress but despite three huge rips and a missing button, I loved it on sight. Leaving Jon to his hammering, I took the dress upstairs to the spare bedroom, turned the radio on and with Frank snoozing on the bed, keeping me company, I set to work. 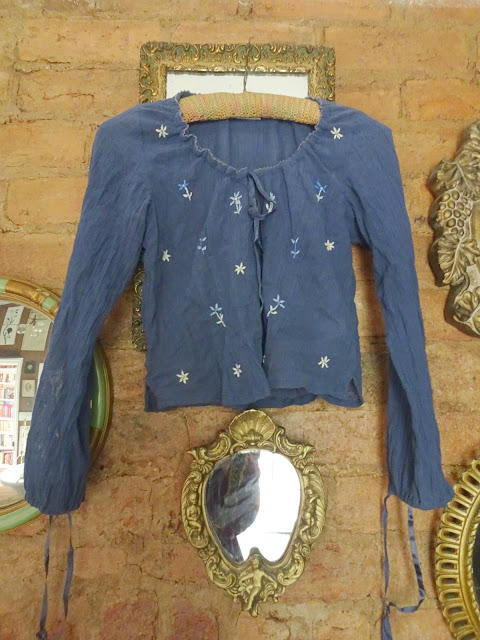 Since I'd clicked Buy-it-Now I'd been pondering on what to patch the dress with but inspiration struck and I remembered the 1990s Miss Selfridge Indian cotton blouse I'd found for £1 in the charity clearance shop before lockdown, it could be sacrificed for the cause. 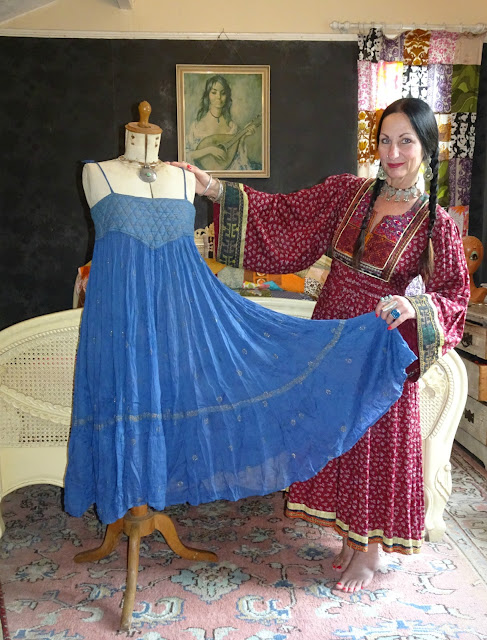 Three hours later, the tears were sorted and I'd managed to make myself a covered button using a similar sized one from my stash. I've wanted one of these quilted bodice sundresses for ages but the ones I watch on eBay sell for £££s, if I bought one at that price I'd be scared to wear it. Having a repaired version means I won't feel the need to save it for best. 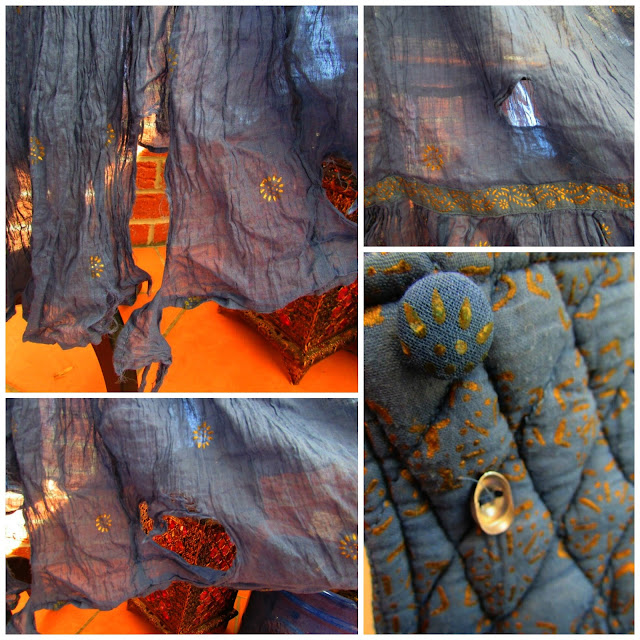 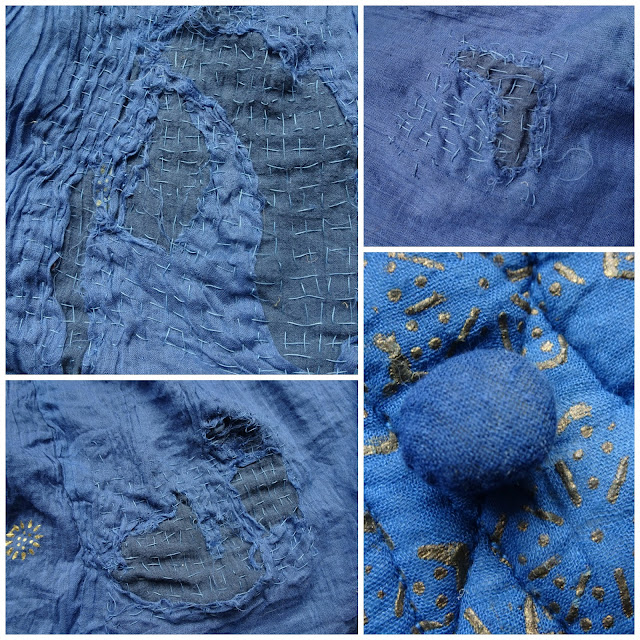 Meanwhile, downstairs Jon had finished reupholstering the chairs and had also given the frames a coat of satin varnish. The makeover cost us a grand total of £10. 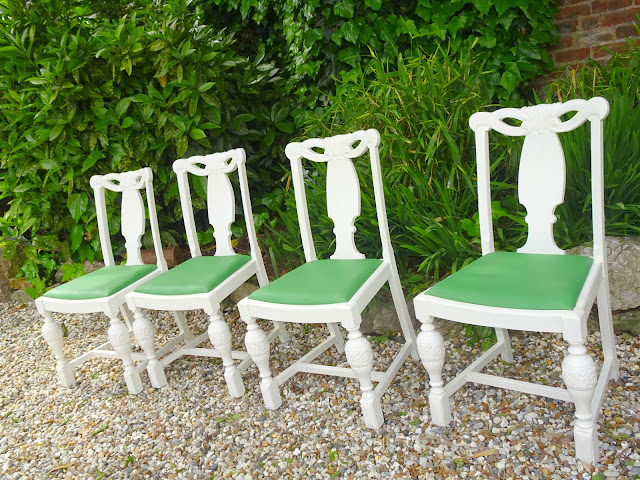 Tea was couscous with cheese, pickles, cucumber salad and crusty bread with olive oil, eaten at 4.30 as we'd not had lunch. 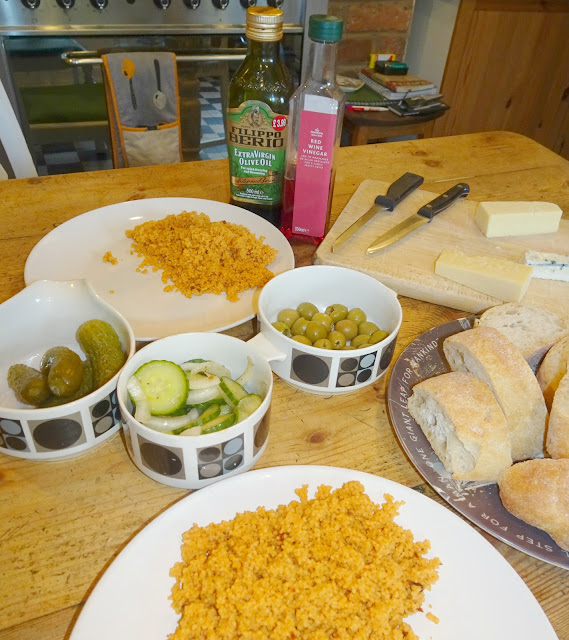 We spent the evening watching Morroco to Timbuktu, a travel documentary and the series finale of the wonderful Norwegian drama, State of Happiness. With it being Saturday night a few rums were consumed. 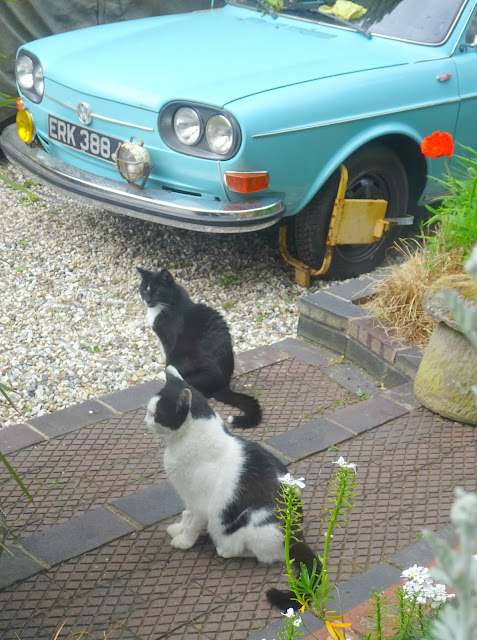 This morning (Sunday, day 65) I was up first and, as Frank was back to his usual self, let him out for the first time since Wednesday morning. Stephen Squirrel had been spooked since Frank's surgery, spending all his time outside, hissing at him and barely eating. Thankfully, he was also back to normal, happy to share our bed with him, wolfing down his breakfast and accompanying him for a stroll around the garden. I brought tea back to bed and we read until 8.30am. 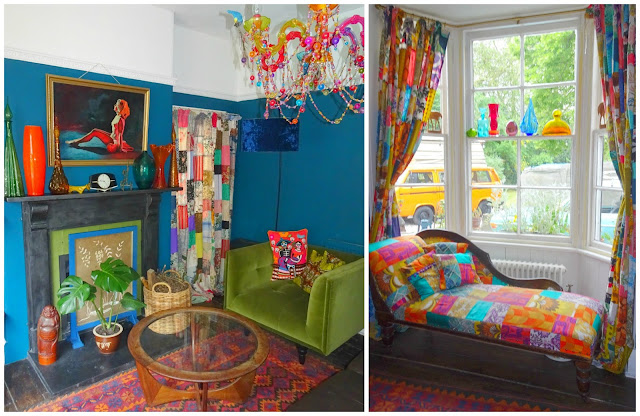 Jon made toast for breakfast and scribbled down a list of groceries we were running short of. After he'd dressed he braved the shop for supplies whilst I cleaned the lounge. 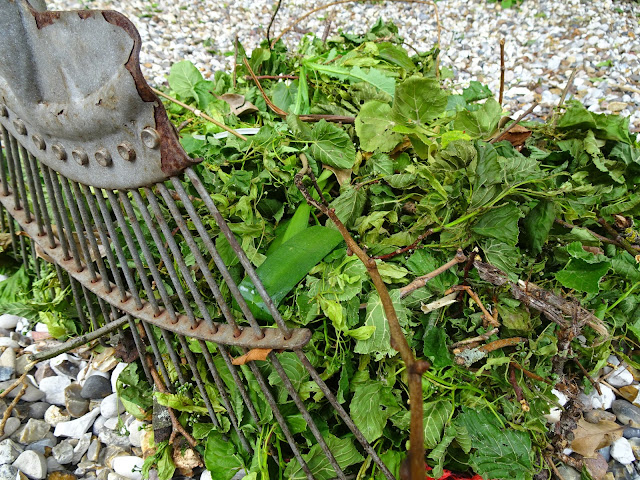 The wind we'd been battered with for the last couple of days had finally dropped so I raked up the debris blown down from the neighbour's enormous lime tree that overhangs our garden. 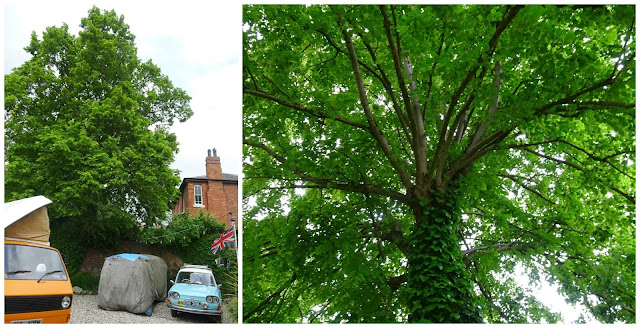 After our lunchtime noodles, Jon, having scrubbed them down when he got back from his shopping expedition, painted the legs of the kitchen table. 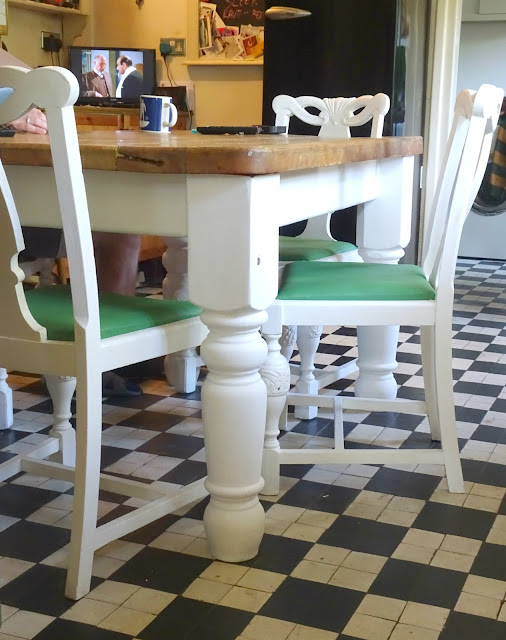 I watered the patio plants and topped up the bird food outside. 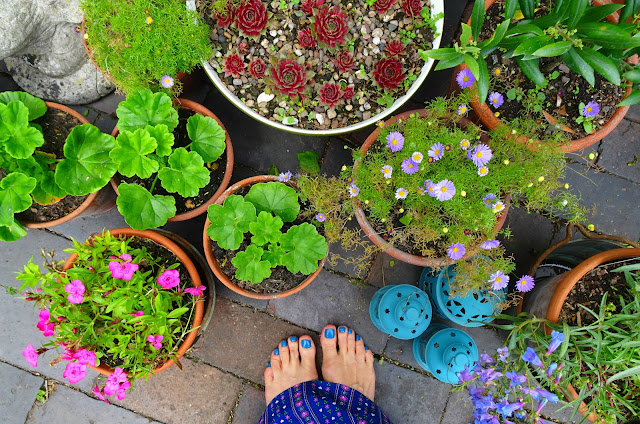 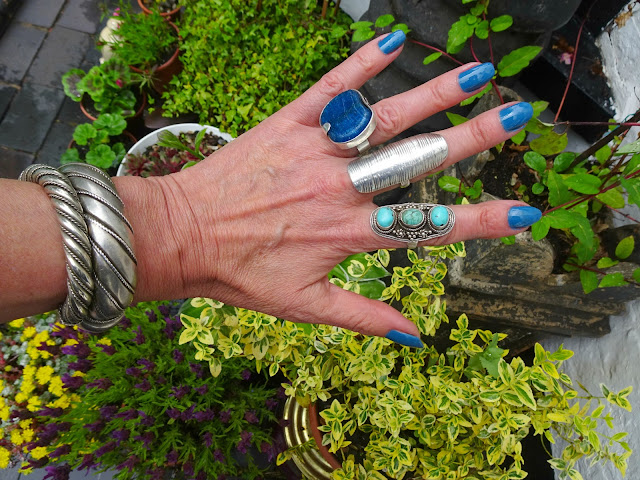 The contents of my pots surprise me on a daily basis. Other than the pansies, which I had delivered from a local garden centre a few weeks ago, my plants are at least a year old, many are annuals which are only supposed to live for a season before they die off, I'm glad I'd resisted the temptation to chuck them in the garden waste bin at the end of the Autumn. 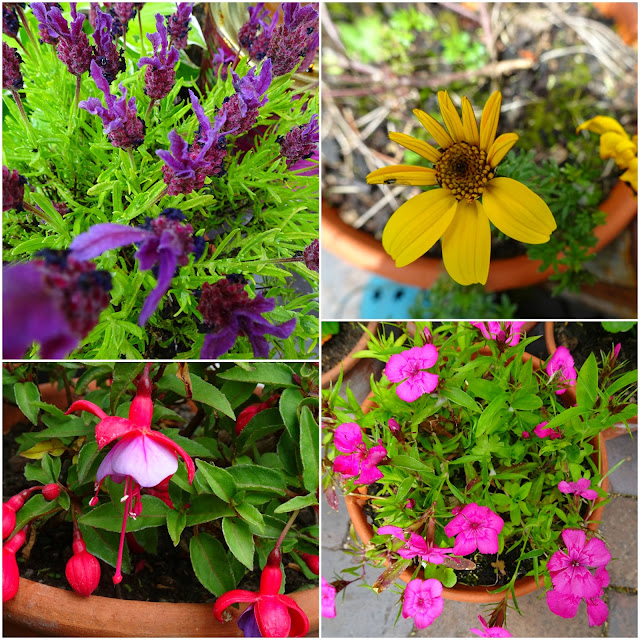 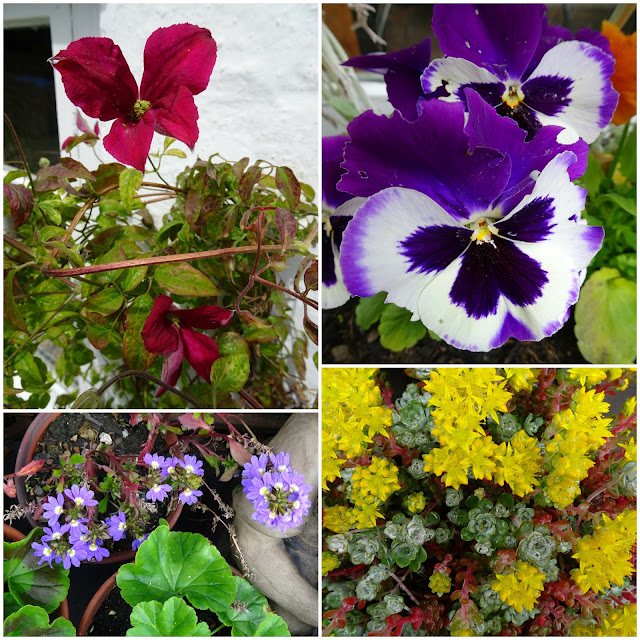 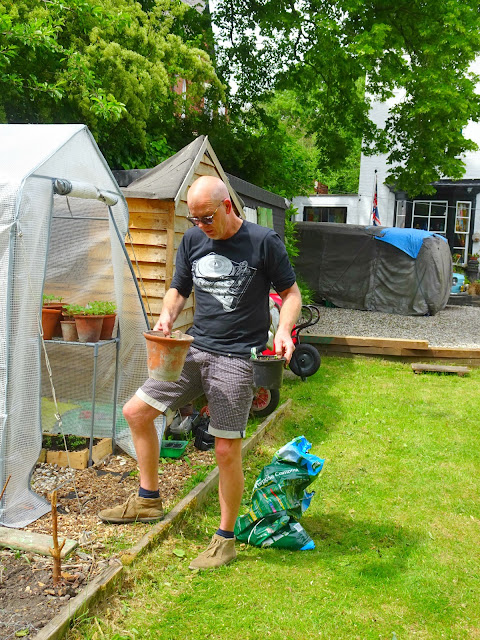 And I, determined not to let that bloody blackbird get the better of me, devised a bird scarer to keep the thieving creature off my black and redcurrant bushes. My creation involved garden twine, scrunched up kitchen foil and (thanks, Anne in Ireland) a few unwanted CDs. 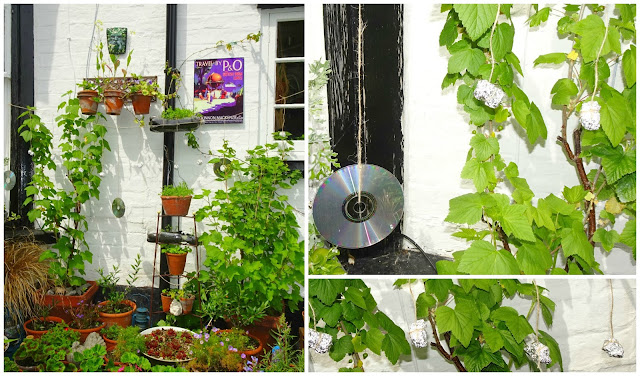 Meanwhile, in the greenhouse....we have tomatoes, tomatoes and even more tomatoes. Just as well we like tomatoes! 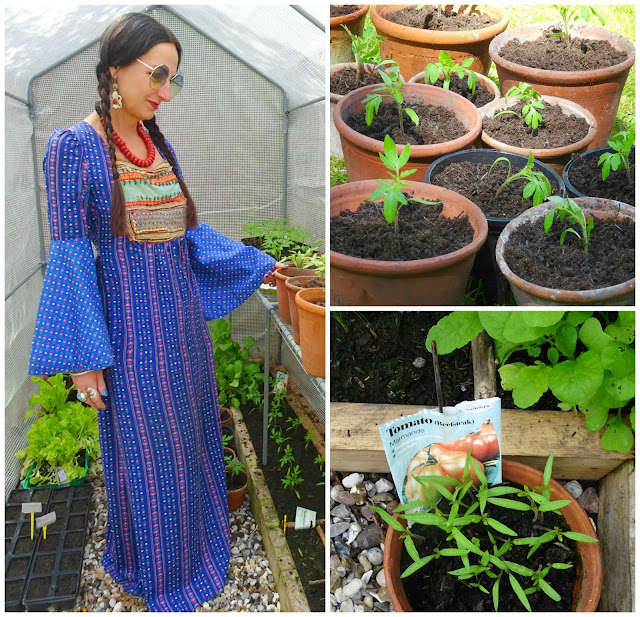 The grey clouds that had filled the skies for most of the weekend had burned off leaving us with some glorious sunshine & much welcome warmth. I grabbed my book and Iranian bedcover and finished my book while lounging on the lawn. 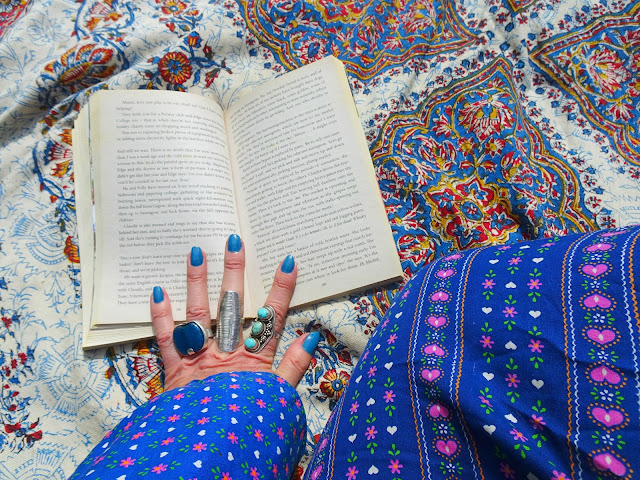 Frank was happy to take it easy in the shade, 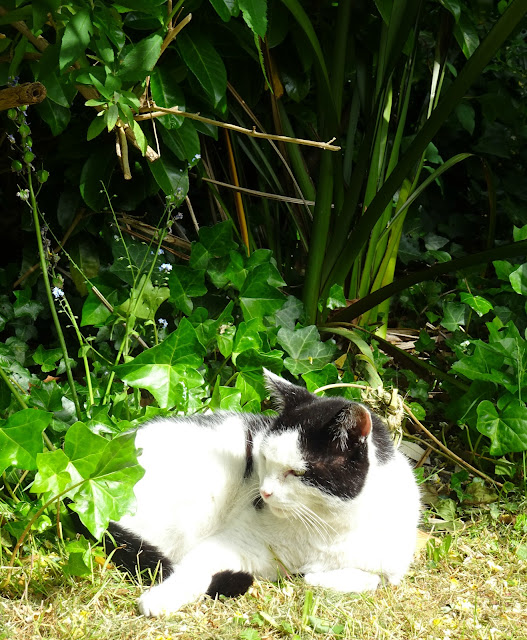 Tea was mini veg samosas & a handful of potato lattices from the freezer, coleslaw and a salad of cherry tomatoes, grapes, green pepper and cucumber drizzled with olive oil and sprinkled with flat-leaf parsley, mustard, curled cress and summer savoury (all home-grown) followed by an ice-cold lager on the lawn with all four of us squeezed into a tiny patch of sunlight. 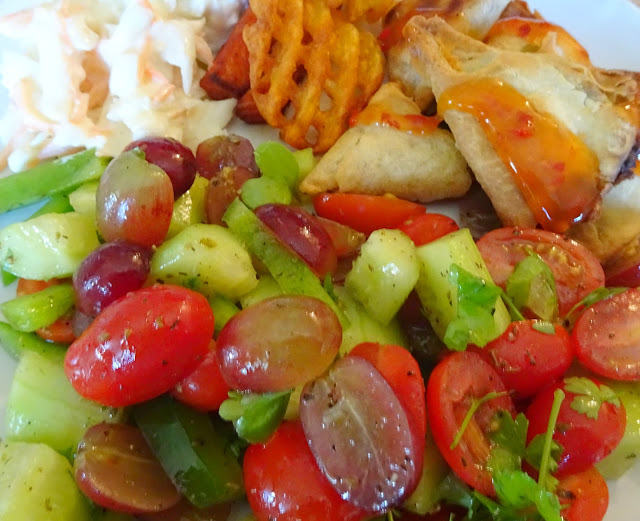 Tonight we'll continue with an incredible documentary we started to watch last night, The Changin' Times of Ike White, the story of a long-forgotten artist who released an album whilst serving a prison sentence for murder in California in the early 1970s. We've just got to where Stevie Wonder was petitioning for his release. I've no idea of how it will turn out or even if he's still alive, but young Ike was certainly easy on the eye.

Thank you so much for all the wonderful and heartfelt comments and messages you've sent me in the last couple of days, a few have brought tears to my eyes, I'm so touched that my posts are bringing you cheer during these strange times. I promise to get back to everyone very soon.