The Doors Of Perception 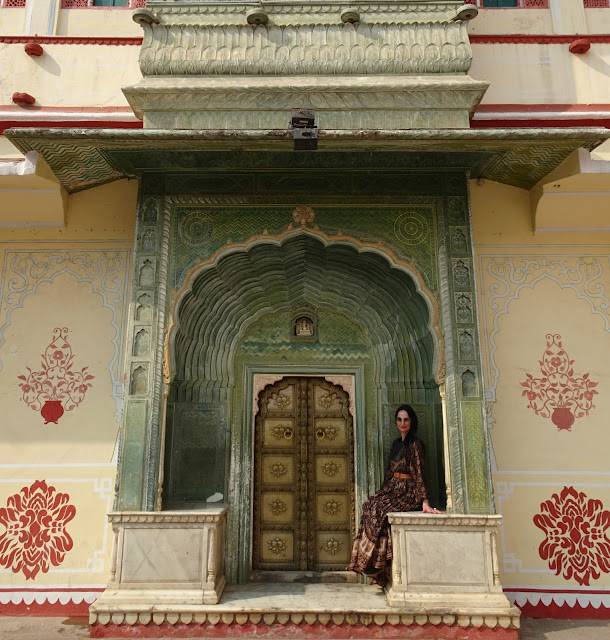 I'm a big fan of the grand entrance and so when we visited Jaipur's City Palace, I was almost lost for words. Could the architectural delights of the Golden Triangle get any better?

We'd arrived in Rajasthan's famed Pink City of Jaipur, so named after Maharajah Ram Singh II  instructed that all the buildings were painted pink to impress Prince Albert during his 1876 tour of India. This colour is so significant to the heritage of the city that it is still enforced under local law. 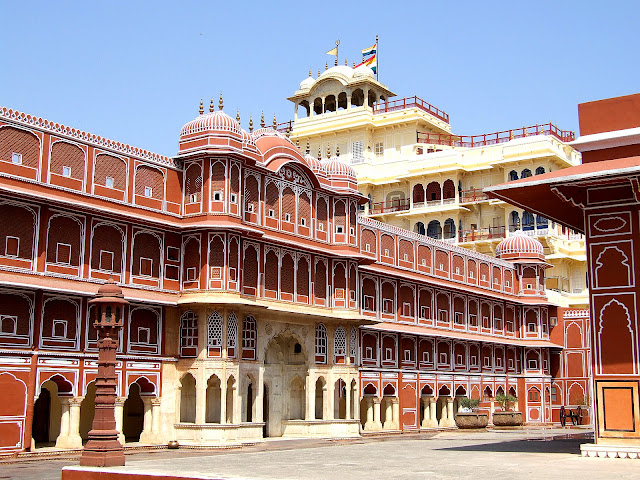 Built between 1729 and 1732 by Maharajah Jai Singh II, the City Palace complex also includes the Chandra Mahal and Mubarak Mahal palaces and was the seat of the Maharajah of Jaipur. The Chandra Mahal now houses an museum but the rest is still a royal residence. 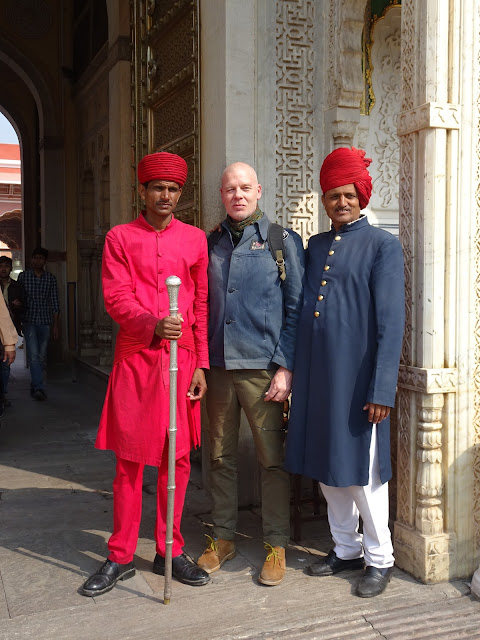 While the Triploia Gate is reserved for use by the Royal Family, Rajendra Pol is one of the entry gates to the City Palace that commoners can use (that'll be us, then!)


Of the various exhibits on display within the museum our favourites were Maharajah Sawai Madho Singh I's clothing. The Maharajah stood at over 7 feet tall, weighed 39 stone and his body measured 3.9ft across. His wardrobe was both beautiful and extremely opulent, sadly photography wasn't allowed so I'll leave you to imagine the size of his trousers. It didn't seem to put of the ladies, though, he had 108 wives! 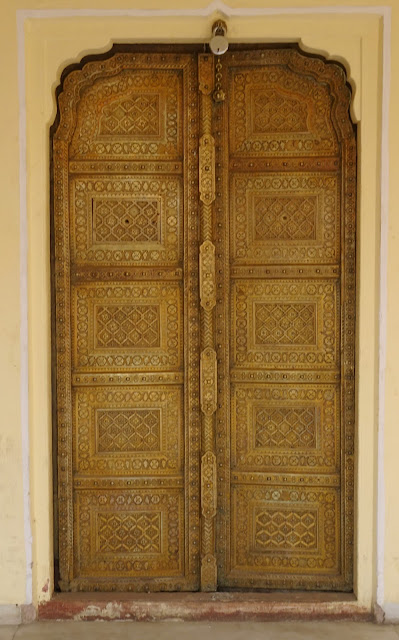 Within the inner courtyard, which provides access to the Chandra Mahal, you'll find four small gates (known as the Ridhi Sidhi Pol) adorned with themes representing the four seasons and Hindu gods. The gate Jon's posing by is the Northeast Peacock Gate representing autumn and dedicated to Lord Vishnu. The gate I'm sitting inside (in the top photo) is the Southwest Rose Gate, with its repeated flower pattern representing the winter season, dedicated to Goddess Devi. 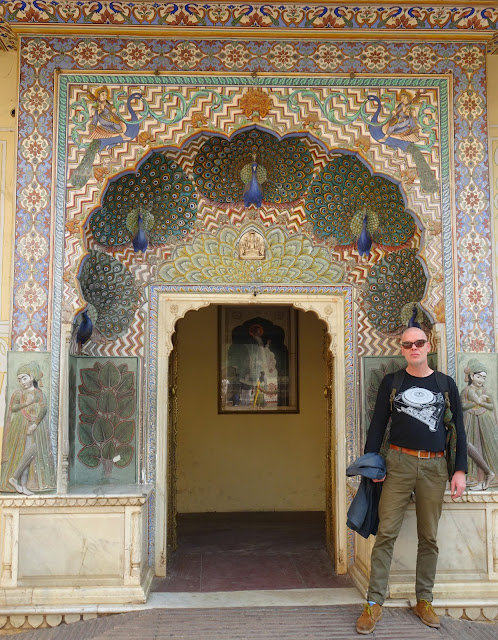 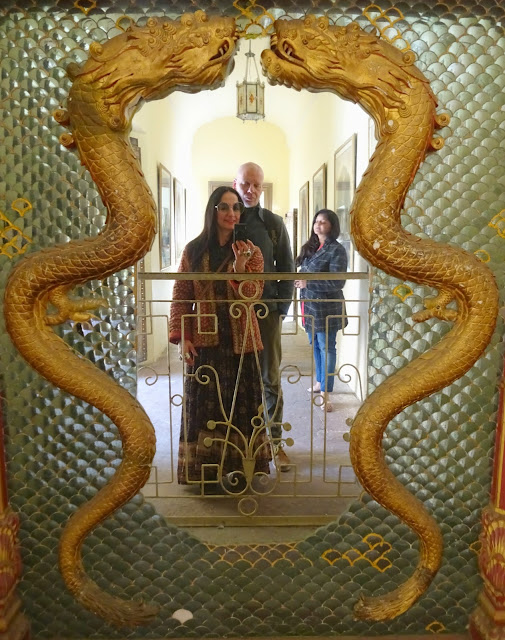 We pose for so many photos for Indians we thought we'd ask some holidaymakers to pose for us. This couple (how beautiful is her dress?) are sitting within the Southeast Lotus Gate with a continual flower and petal pattern representing the summer season and dedicated to Lord Shiva-Parvati. 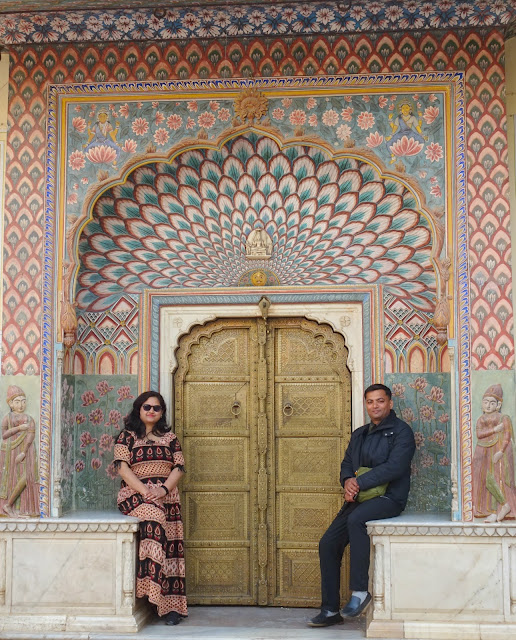 The Diwan-I-Khas (the Hall of Private Audience) is a marble floored chamber with crystal chandeliers suspended from the ornate rose-coloured ceiling. This is where the Maharajah would receive petitioners. 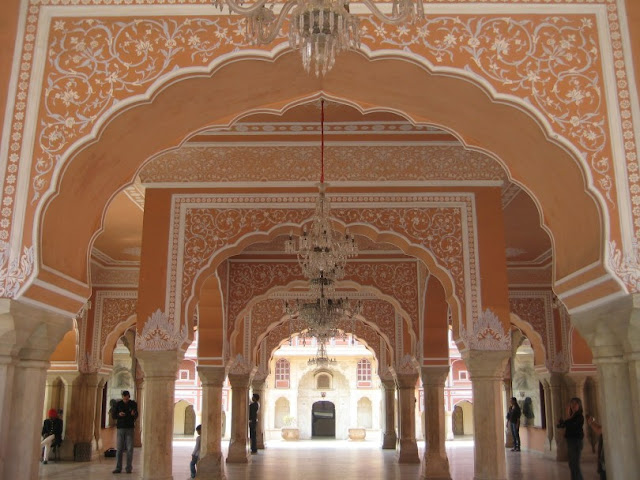 Like many places of historical interest in India, there's a two-tier admission system in place, implemented by the government to encourage Indians to see more of their country therefore domestic tourists pay significantly less than foreigners. We were more than happy to pay 500 rupees (around £5) although a couple of Americans weren't quite so pleased, yelling I'm not paying 7 bucks just to see a pretty house, before walking off in a huff. Their loss.

Those gateways were priceless. 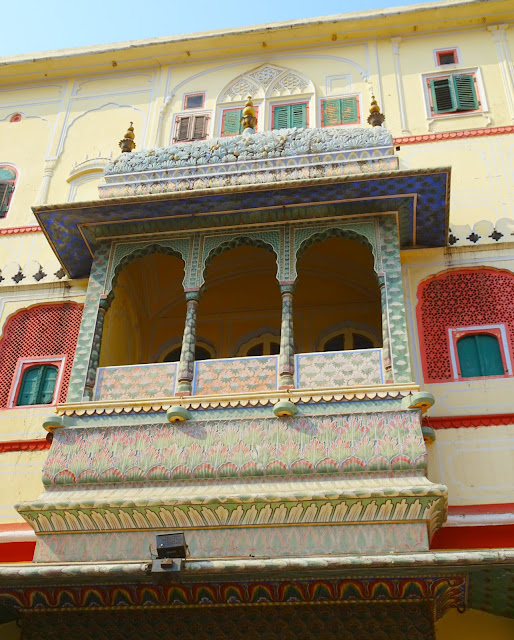 At first glance you'd be forgiven for thinking that our next port of call was a mid-century construction but no, it's Jantar Mantar, a collection of nineteen architectural astronomical instruments built by Sawai Madho Singh I and completed in 1734. It features the world's largest stone sundial, and is a UNESCO World Heritage site. At one time, twenty-three astronomers were employed here. 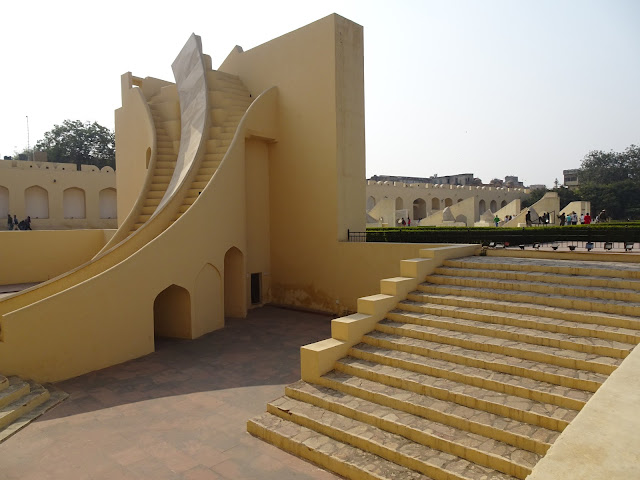 The sundial is accurate to .244 seconds! 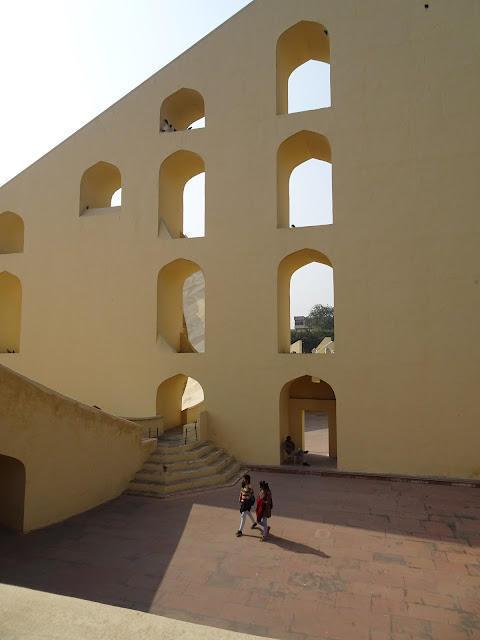 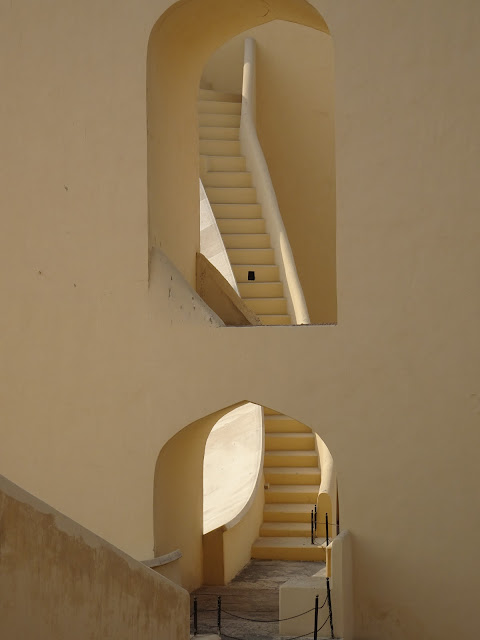 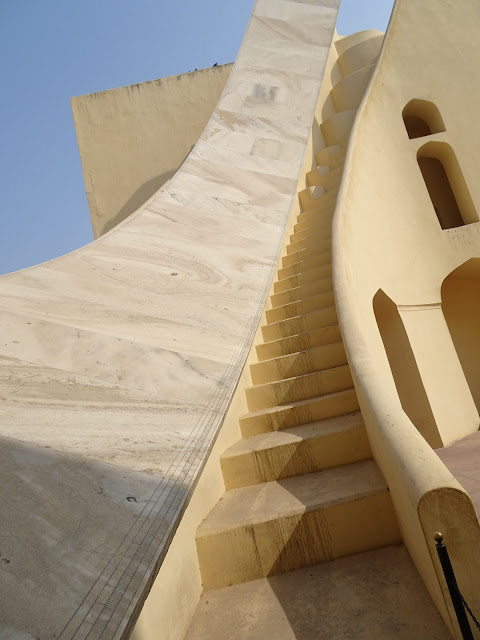 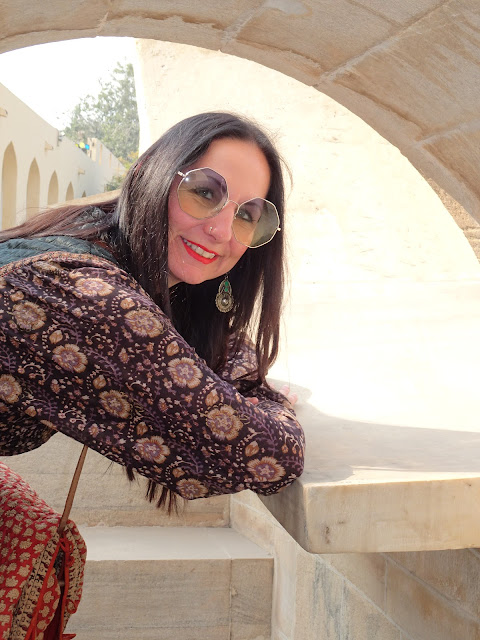 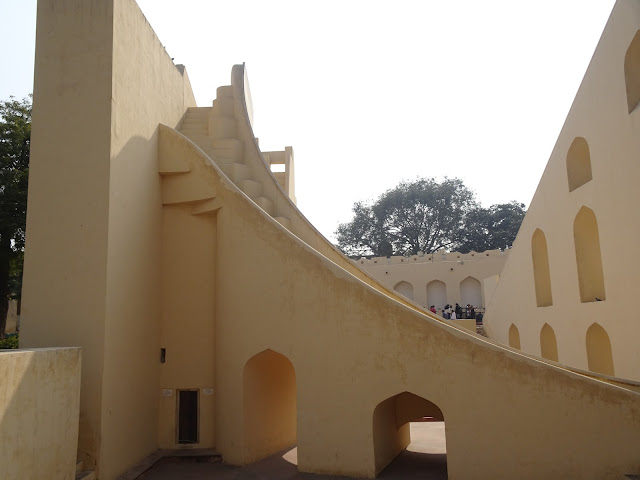 After marveling at the other-worldly architecture of Jantar Mantar, we ascended the steps to reach the top of the Isarlat minaret, which was built in 1749 and originally used as a watchtower over the City Palace. Known locally as Swagasuli (literally translated as passage to heaven), it's 140 feet high and was once the tallest building in Jaipur. It was well worth the climb, the views over the pink city were spectacular. 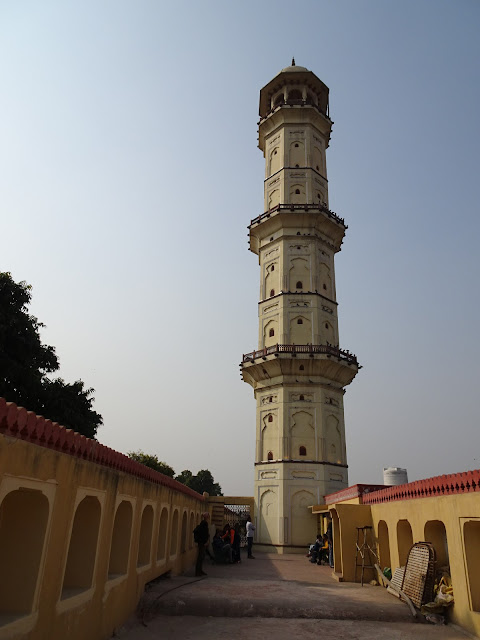 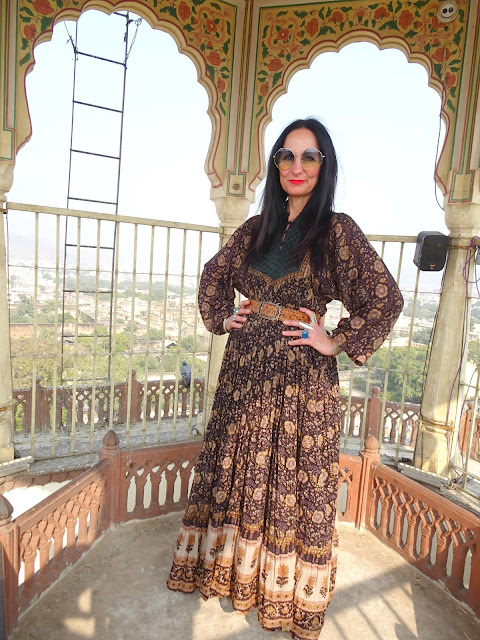 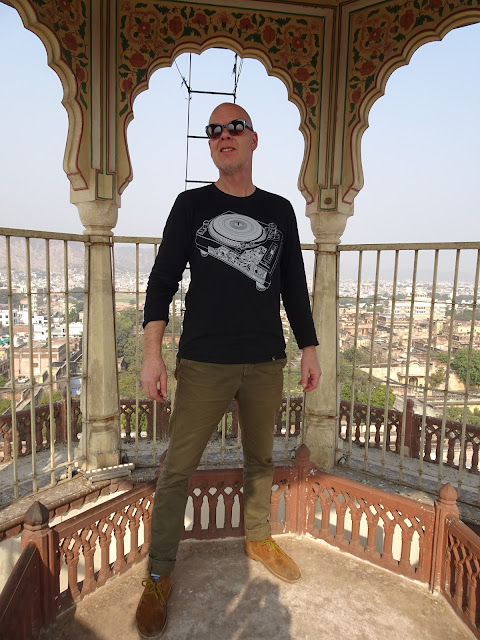 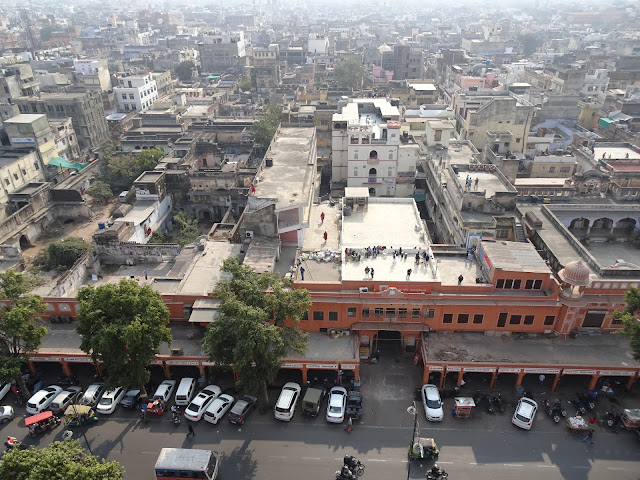 The previous day we'd checked into Hotel Sweet Dreams, situated within the old city walls overlooking the bazaar, where on check-in we were greeted with marigold garlands, tilak and red roses and after posing for an obligatory selfie with most of the lovely hotel staff, we treated ourselves to lunch. 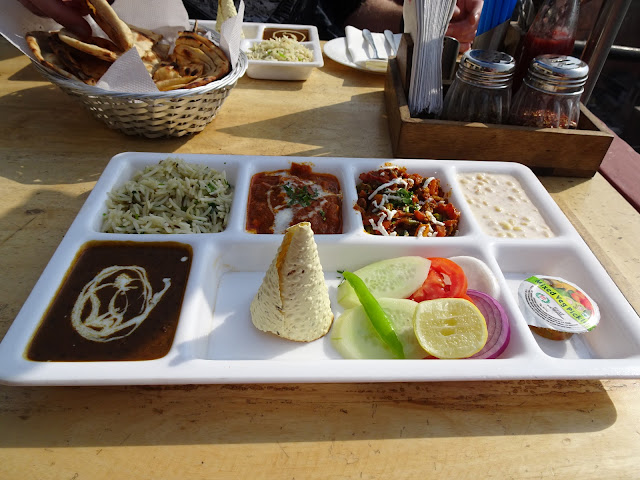 Sweet Dreams is one of the highest rated hotels in Jaipur and we loved the rooftop restaurant so much that we ate there every night (and had a cheeky beer every afternoon when we got back from our adventures). The weather, although a pleasant 70 degrees in the middle of the day, plummeted to around zero at night but the staff lit braziers, offered us blankets and provided traditional headgear to stave off the chill. 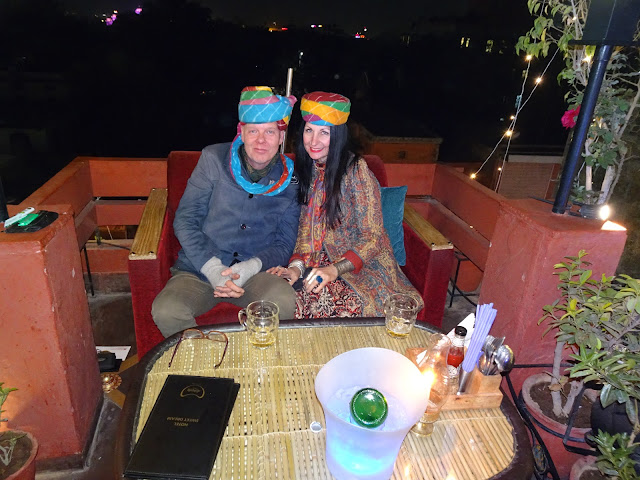 Jon will kill me when he sees this!