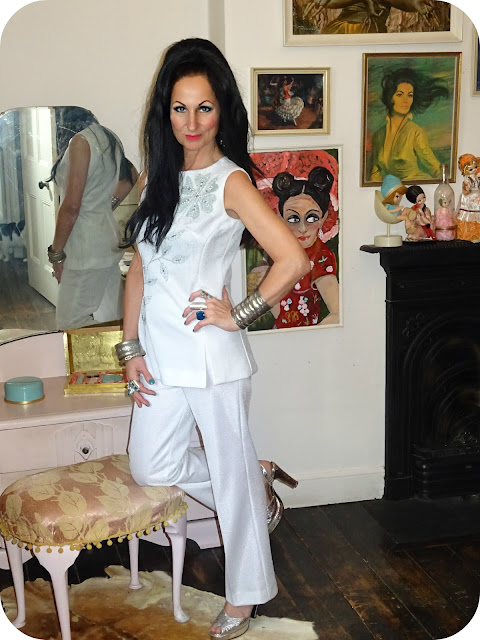 Yesterday, when G&T offered me this silver Sixties trouser suit they'd recently found in a charity shop I couldn't take it off their hands fast enough. At first I thought it was a bit Jane Fonda in Barbarella but once I tried it on, H-Bomb Helen, the legendary vamp who appeared in of hundreds of Bollywood films in the 1960s & 1970s, sprung to mind. HERE's a post I dedicated to her seven years ago. 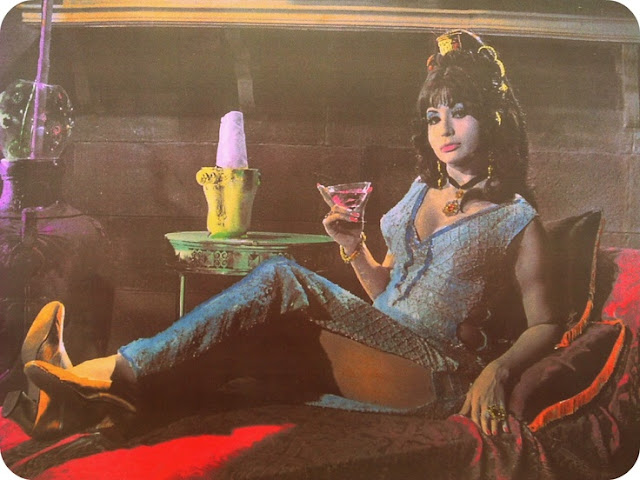 So I put up my hair, applied lashings of matt blue eye shadow (Revlon's Venetian Blue, bought in 2008, now discontinued but you can find it on eBay) and, using a felt pen eyeliner, drew a thick black line both beneath and above my eyes, flicking them out parallel to one another. I used an original 1960s matt lipstick, Max Factor's Teasing Pink (great colour but like all vintage lippie, stinks to high heaven) then added my usual Sleek creme blusher and a pair of cheapo false eyelashes from a discount chemist. 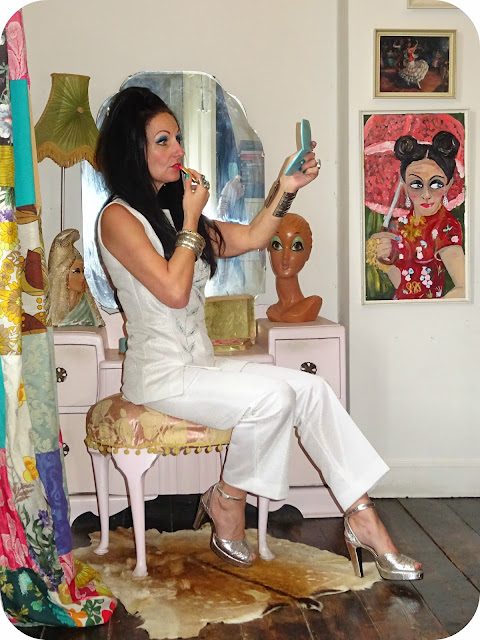 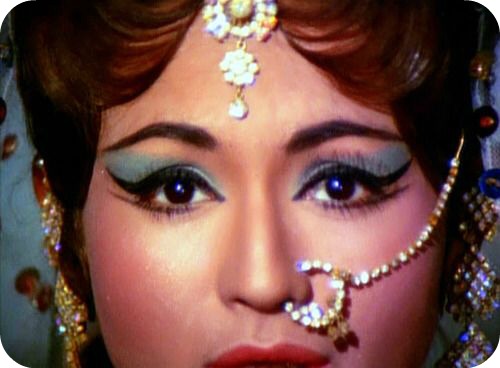 Sadly I haven't got Helen's exotic ancestry (half Burmese, half French) so no doe-like brown eyes, just bog standard British blue ones. 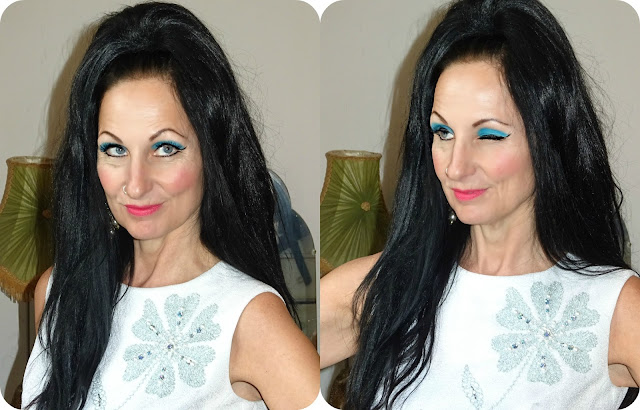 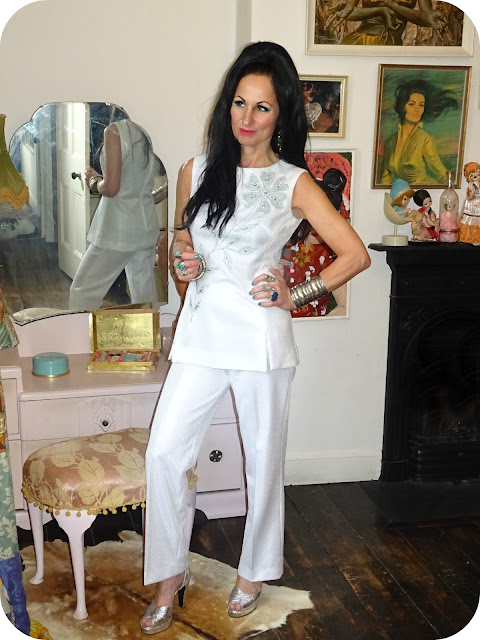 So what's with today's Bollywood love? I'm celebrating! I've only gone and booked our flights to India 'cos there's nothing like distracting yourself with an intense internet search when you've got a full-on weekend of vintage fairs to pack for. Wanna know the best thing? Two Birmingham to Mumbai return tickets with Air France are half the price of the Manchester to Goa cattle class flight we used in January. In fact, at just over £300 each I think they're one of the cheapest deals we've found in 20 years of visiting India (Kayak, I love you). Three months and counting......

Talking of India (sorry if I'm alienating non-Brits) but I have to say that last night's new BBC series, Ganges With Sue Perkins, bored the silver lurex pants off me. She seems like a nice enough woman (not that I've ever watched that cake baking programme people seem obsessed by) but haven't celebrity India travelogues been done to death? There's only so many banal comments about cows in unexpected places, interviews with middle class Westerners who've jacked in a corporate life to do something worthwhile and pulling an "ooh, that must hurt" face at bendy yogis. Yes, Sue's on a quest to achieve inner peace after the death of her father six months ago but having to endure her chucking up due to altitude sickness, moaning about her bones aching and being a bit sarky about the standard of her backpacker hostel don't exactly endear her to me. While the climate change & environmental issues Sue touches on are important I'm inclined to think that if our TV channels didn't show so many celebrity travel documentaries they'd be a lot fewer tourists buggering up far flung places. 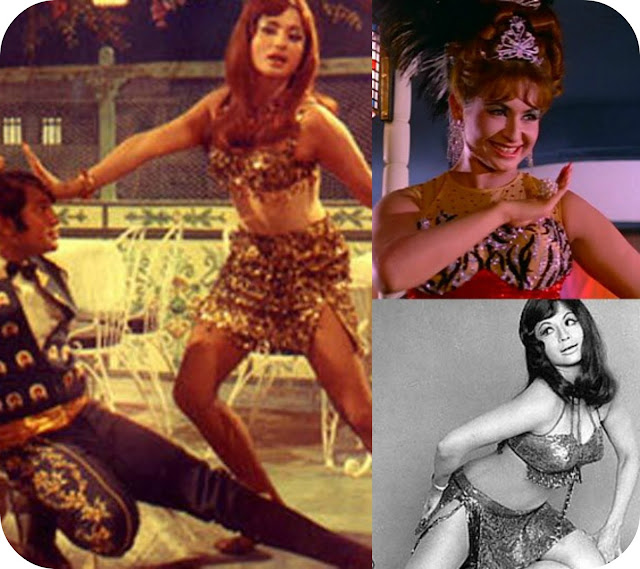 And just when you thought I couldn't find anything crazier in a charity shop this week than a pair of suede Lederhosen.....ta-dah! A vintage showgirl costume found yesterday for the princely sum of two quid! 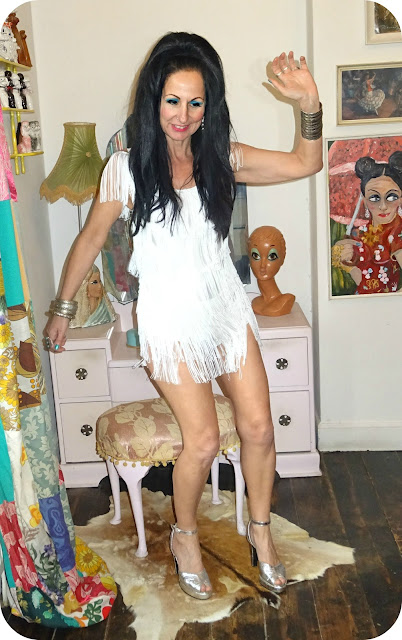 Just what every 50 year old needs in her wardrobe (well, this 50 year old does, I can't speak for the rest of you!) Perfect for dancing around the bedroom to Piya Tu Ab To Aaja. 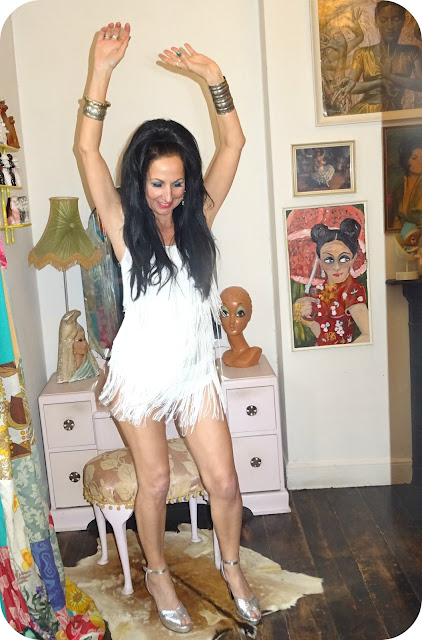 We're doing the double this weekend and trading back-to-back with Judy's Affordable Vintage Fairs at two gorgeous English Spa towns - Leamington Spa on Saturday (details HERE) and Bath on Sunday (details HERE). It would be fab to see you (and I promise not to dress like middle-aged Bollywood showgirl!)