The Hippy Trail - Vintage Hunting in The Cotswolds 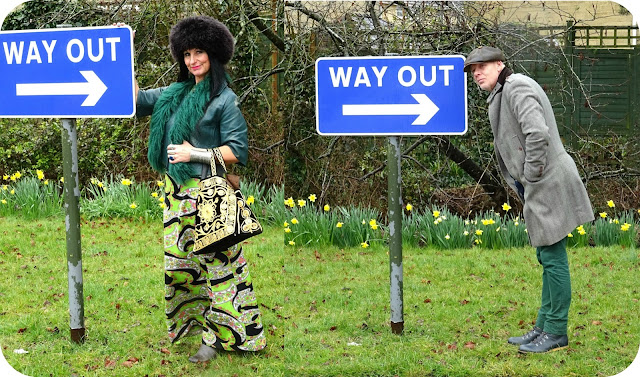 When Jon suggested a day trip to Cirencester in The Cotswolds I was excited.


My Grandparents holidayed in The Cotswolds every year and always brought back the coolest souvenirs, including Jacob my pet tortoise, going strong some 41 years later. There must have been a lot of shops specialising in imported Indian-made crafts back then as coming home presents would consist of carved wooden toys, papier mache curiosities & embroidered wall hangings for my brother & I and block printed hippy dresses and tribal jewellery for Mum. Dad used to get a Toblerone as he wasn't into trinkets. 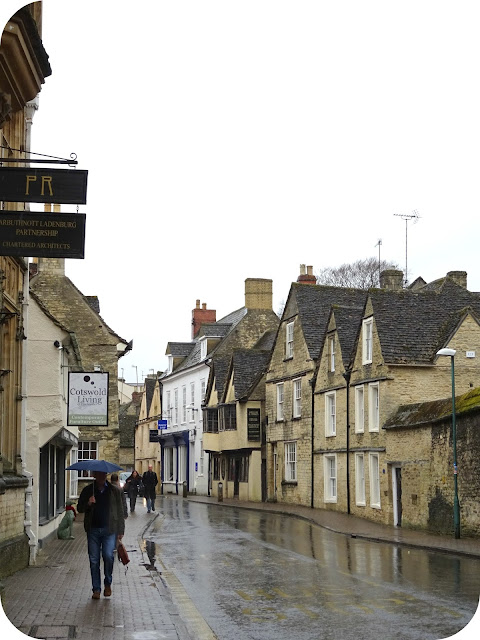 After a bit of research (The Association of British Charity Shops website tool, Find A Shop) we discovered Cirencester had loads of chazzas and, remembering the stuff Grandma & Grandpa used to bring us back,  I was hoping for lots of original hippy gear but Jon gave me a reality check. Unlike Walsall (this week ranked as the 4th most deprived place to live in the UK), The Cotswolds is posh. The charity shops might either be stupidly expensive or ransacked by rich hipsters like Kate Moss & Pearl Lowe (both live there) who've snapped up anything remotely interesting or they might just be full of the kind of stuff favoured by the affluent; decent quality but inanely bland, conservative and drab. No matter though, even if we came back empty handed it would be a chance to escape to somewhere pretty. 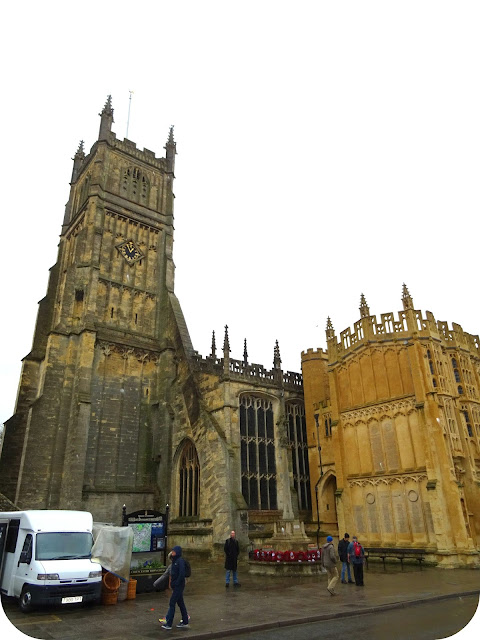 The last time I'd visited Cirencester was as a fifteen year old school girl with the rest of my O Level Latin classmates in 1981. Known as Corinium in Roman times, it was then the second largest city in Britain with a thriving wool trade, the first known reference to it was by Ptolemy in AD 150. There are still Roman remains scattered around the area including two villas on the outskirts of the town. To make the 72 mile journey from Walsall we drove along Watling Street and down Fosse Way, originally built by the Romans and still major traffic routes almost two thousand years later (blows your mind, doesn't it?) 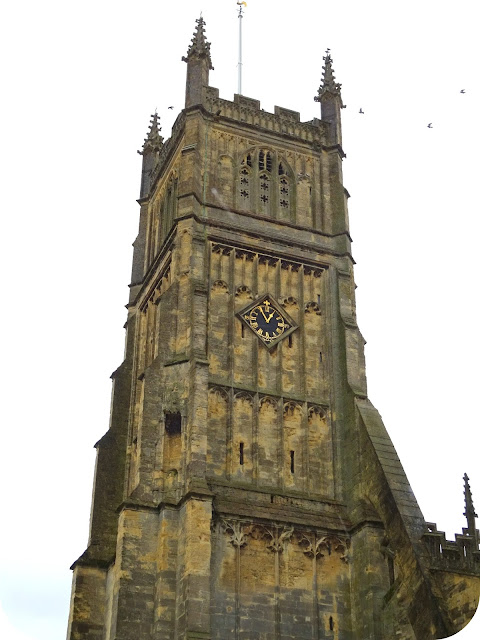 The Medieval St John The Baptist church was built by Henry I in 1240. The tower, dating from the 15th Century, dominates the town's skyline. Previous to this a Saxon church stood in the same location for almost 400 years which replaced one nearby which was built by the Romans and destroyed in 577 AD. 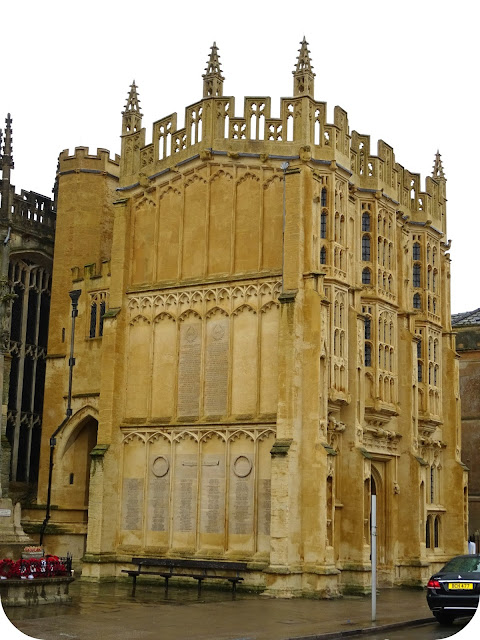 The South Porch is said to have one of the most elaborately decorated porches of any English church. It was built in 1490 by the Abbey, which was dissolved following The Reformation, only joined to the church in the 18th Century. 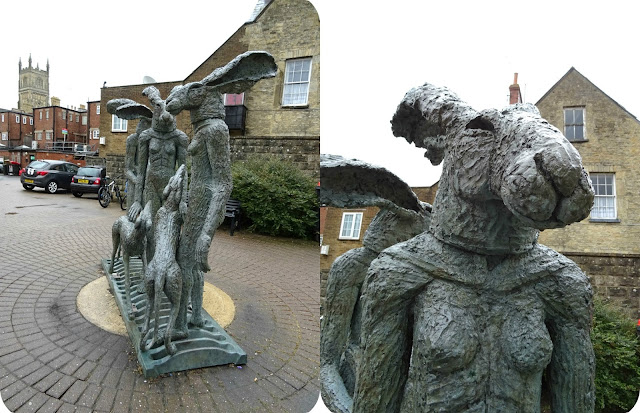 Cirencester hosts a Hare Festival each year. We spotted loads of statutes dotted around. 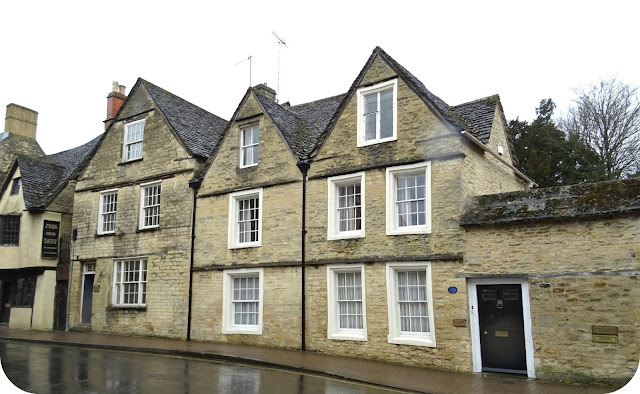 Testament to how gorgeous the town is, even on a day as grim as yesterday it still looked beautiful.The buildings are made from Cotswold Stone, oolitic Jurassic limestone, which varies in colour between the north and south of the area. The stone around Cirencester is golden.

As you can see, the weather was filthy. There weren't that many people around but everyone we did meet was lovely. Strangers smiled at us and charity shop helpers struck up conversations, one manager even offering us the use of their staff room loo when we enquired about public toilets . Unlike back home we didn't have to dodge mobility scooters, pick our way through discarded fast food wrappers, or turn down dodgy blokes trying to sell us meat, fags and knock-off perfume out of grubby carrier bags. We didn't see a boarded up shop, a wolf fleece or a pair of grey jersey jogging bottoms all day. 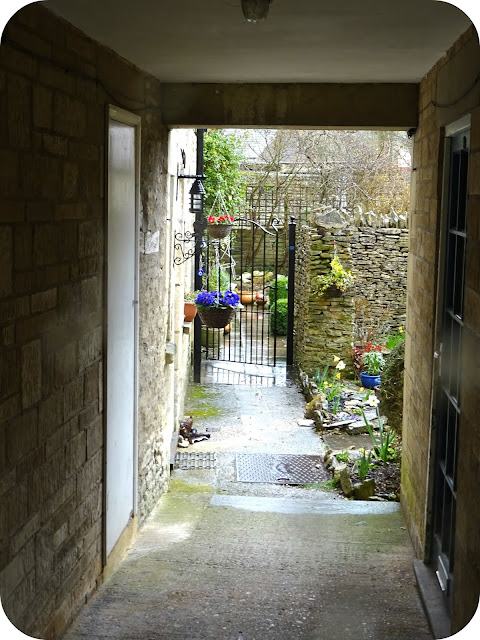 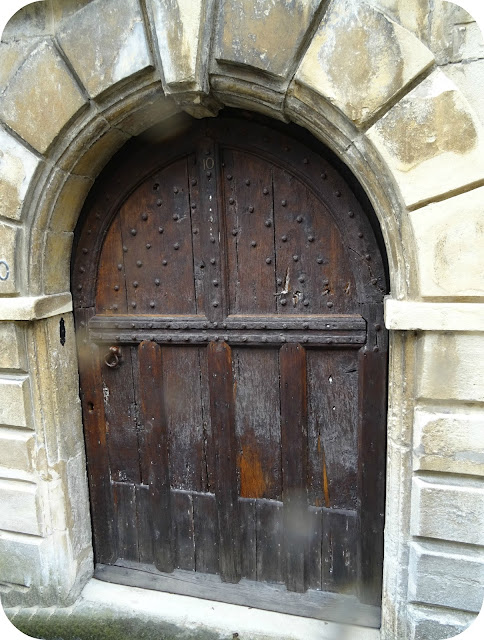 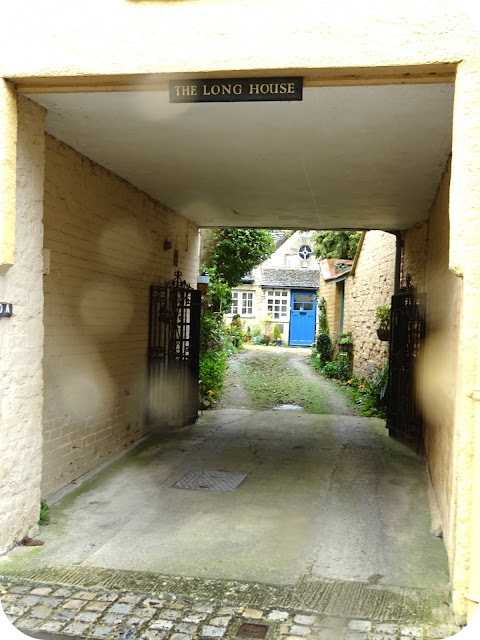 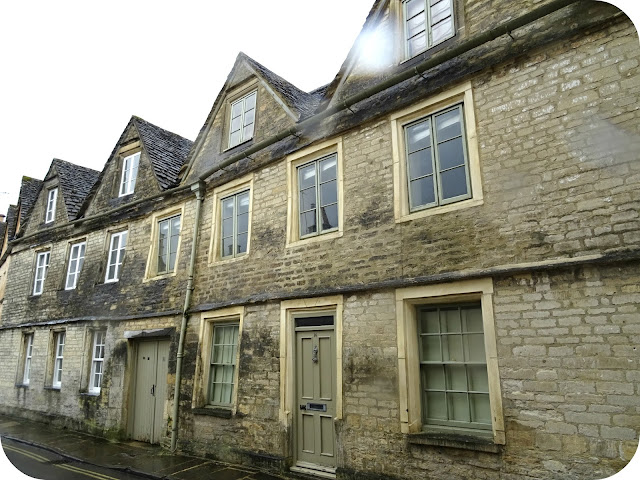 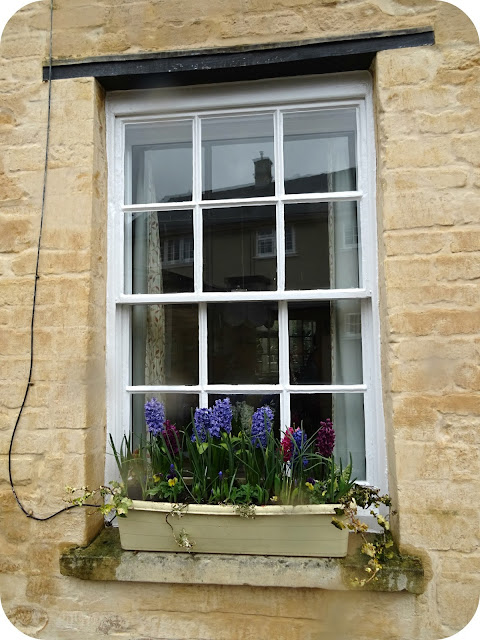 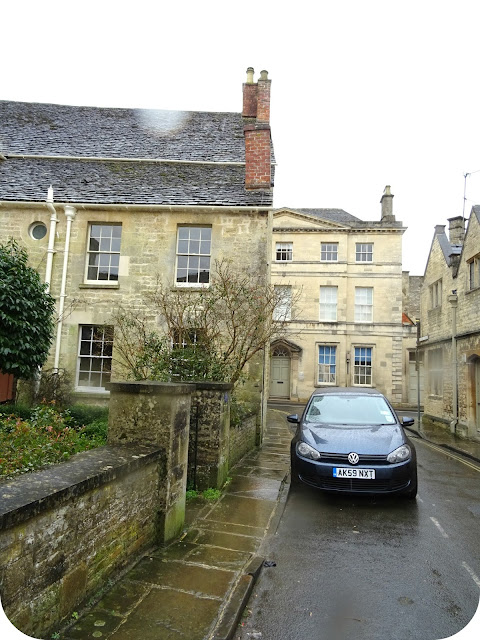 And the charity shops? Whilst not as cheap as our local ones, the condition & quality were infinitely better and neither of us saw anything ridiculously overpriced. We even spotted a gents' cashmere & wool Pierre Cardin overcoat for £30 which would be an absolute bargain for somebody, I doubt if you could get a coat from Primark for that (I've still never been in one). Jon said it was a nice change not to see clothes with someones dinner ingrained down the front. 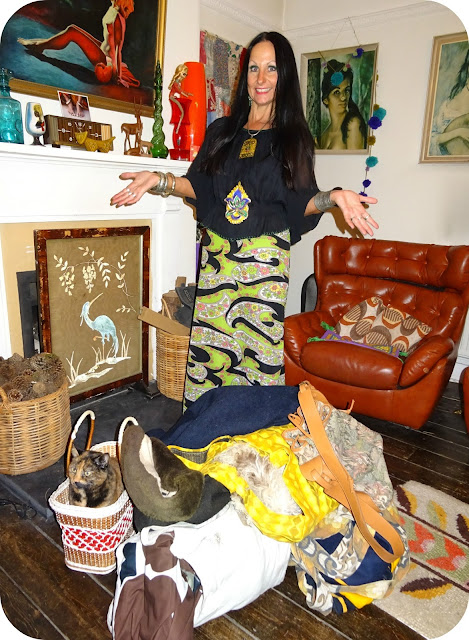 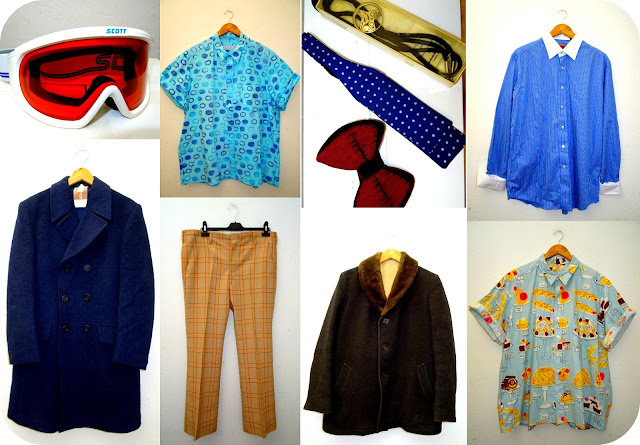 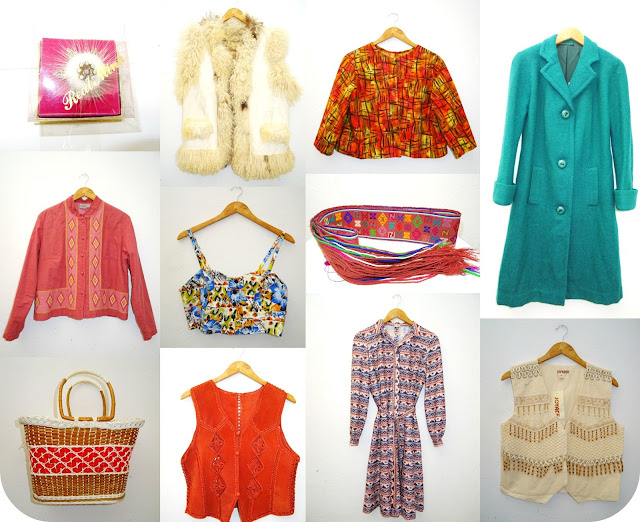 
I did find a few bits of hippy gear including this Indian cotton block printed tent dress and the English-made leather shoulder bag adorned with a Medieval tapestry that I'm carrying. A Roman Blue bag bought from a Roman city with a Medieval church, what a coincidence! 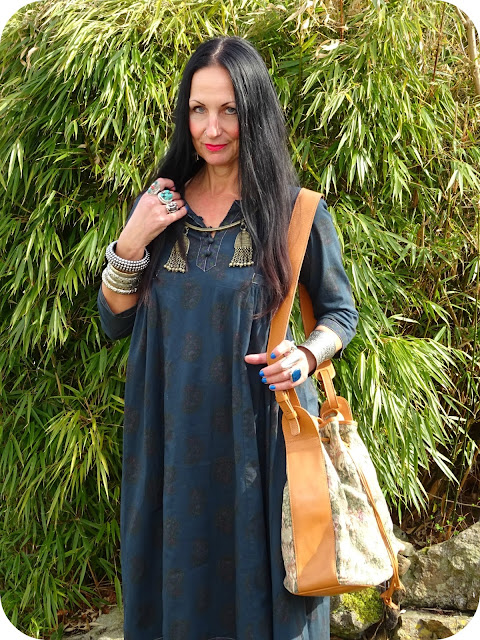 This was an absolute bargain at £1.50! A Marimekko curtain featuring one of the most iconic prints of the 1960s, Unikko. I feel a bit of curtain couture coming on. 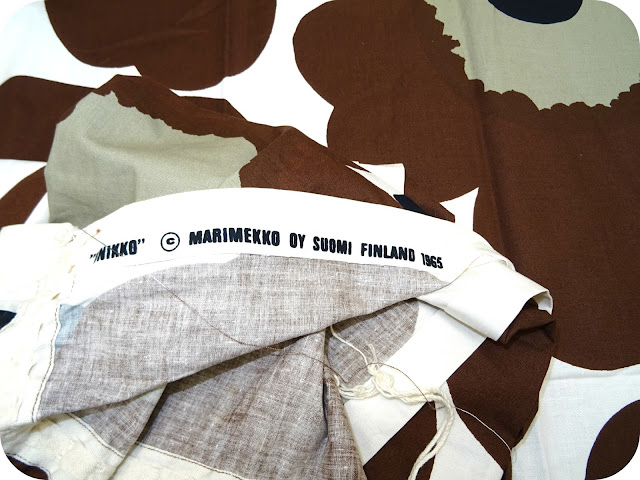 It's the Easter weekend which, if you're a normal person with a job who eats chocolate or believes in God is probably exciting. As self-employed, non chocolate eating atheists we'll just be making the most of having a weekend free from vintage fairs!

Have fun whatever you do.

Linking to Patti & The Gang for Visible Monday.
Posted by Vix at Friday, March 25, 2016