Torrential rain, gale force wind, thunder and lightning, glorious sunshine and a couple of inches of snow, our Great British Easter weekend weather was typically schizophrenic but it did us a favour. Rather than fritter away our spare cash on stuff we didn't need at a Bank Holiday car boot sale we decided to crack on with a project I'd been procrastinating over for at least twelve months. 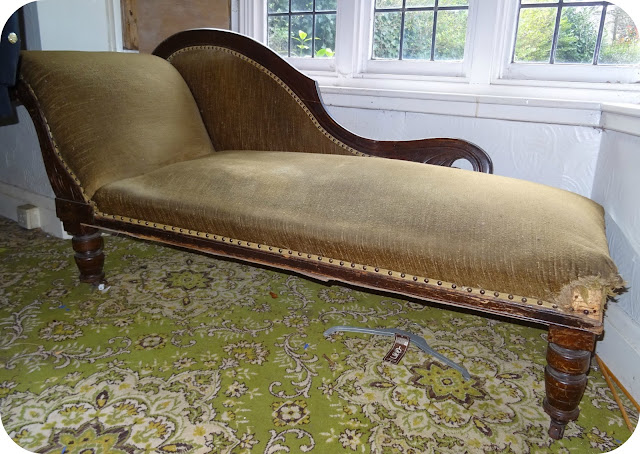 My Mum bought this Victorian chaise from a junk shop in Walsall in the early 1970s. Back then Victorian furniture was hideously unfashionable and she managed to haggle the proprietor down to £15. She had it reupholstered in brown Dralon as it "went with everything" but always regretted not following her heart and going for leopard print. Forty years on, sitting in the empty parental home, it was in a sorry state, sad, drab & faded and ragged to buggery by a succession of family cats. 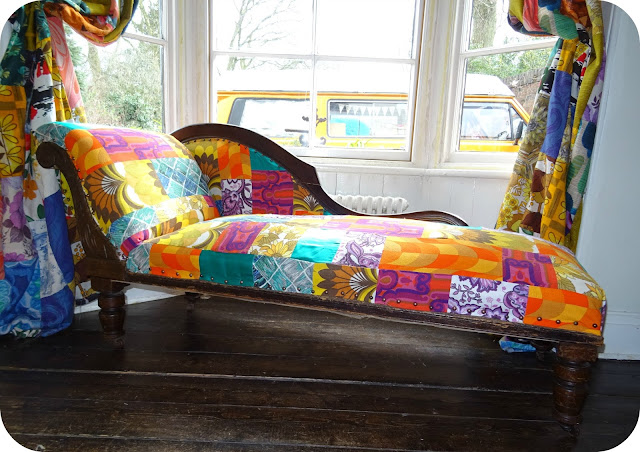 Twenty four hours later and at cost of absolutely nothing it looked like this. Why on earth did it take me over a year to get around to it?! Apologies for the image-heavy post or if you've already seen the before and after photos on Facebook, this chaise has been part of my life for over 40 years, I still can't believe the difference. 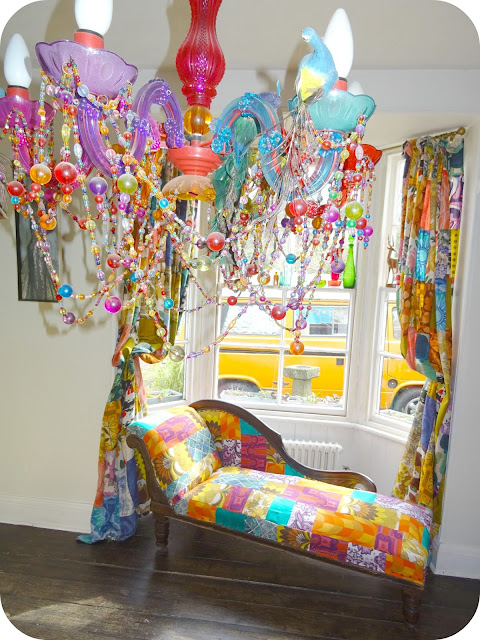 Whoops, that chandelier could do with dusting! 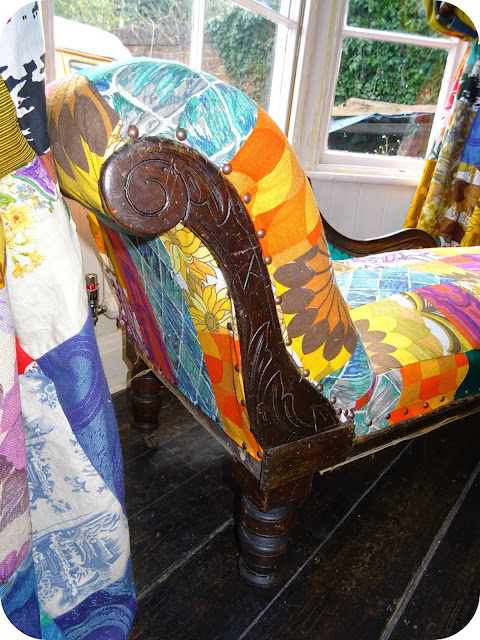 The wood came up a treat with a buff up with some good old fashioned Lord Sheraton Caretaker wood polish and now smells wonderful. Hopefully the pine fragrance will deter Stephen Squirrel and Polly Piglet from climbing up it and sharpening their claws on the patchwork. 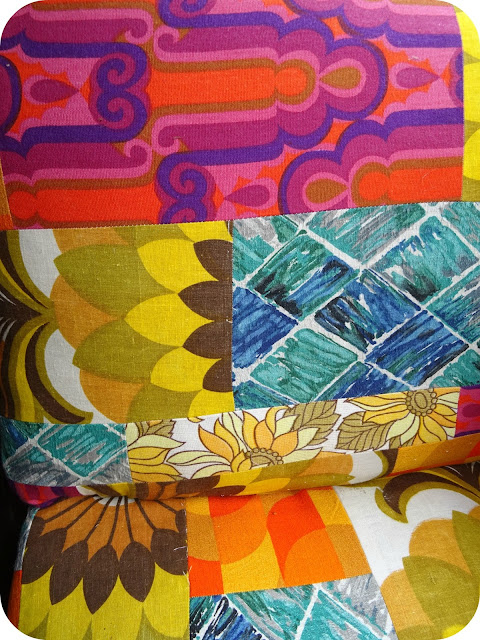 The top panel of fabric Marrakesh by Grace Sullivan (take a chill pill pedants, I know it should have a "C"  and not an "S" in it but that's what's printed on the selvage) and produced by Moygashel in the 1960s has actually been in my stash for over 20 years! 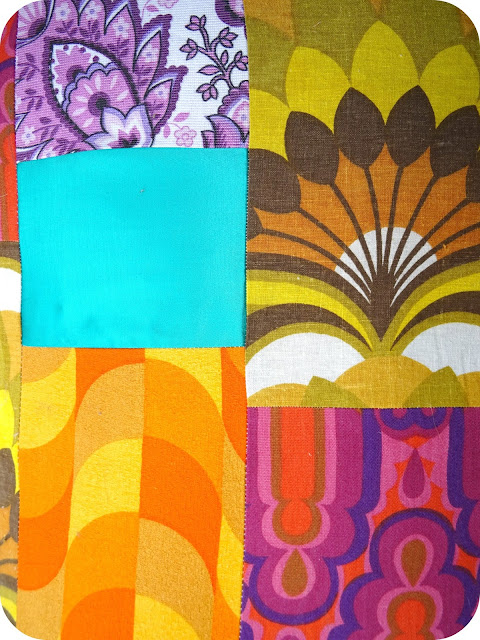 The orange rectangle of fabric, Awning designed by Jill Sutton for Heal's, is another screen print I've had for years, it still had the original price tag attached written in shillings. I also used a piece of groovy Scandi fabric left over from a sewing project, some blue 1950s barkcloth, some vintage raw silk in peacock green and a couple of cheery off-cuts from vintage St Michael curtains. 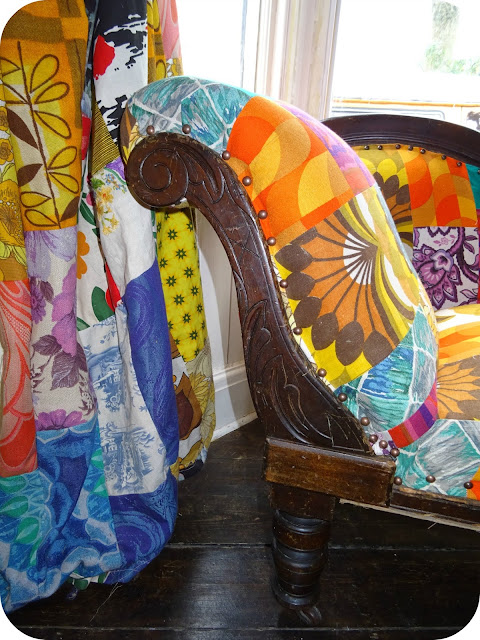 The patchwork took me over eight hours but with rum and coke supplied on demand I hardly noticed. 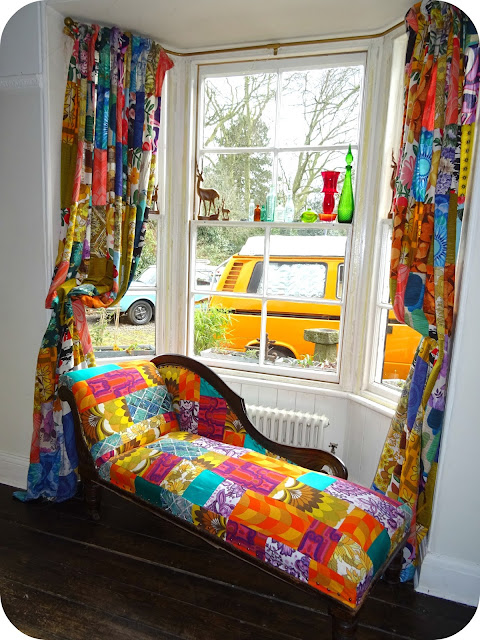 We didn't stay in all weekend, managing an ace day trip down South with some friends on Saturday (blog post to follow). On our travels we visited an incredible interiors shop I could happily have moved into until I realised that the reason I loved it was that it combined Victoriana with 1960s kitsch, vintage Bollywood filmi memorabilia, industrial salvage and antique curiosities ....exactly the way we've furnished our house. 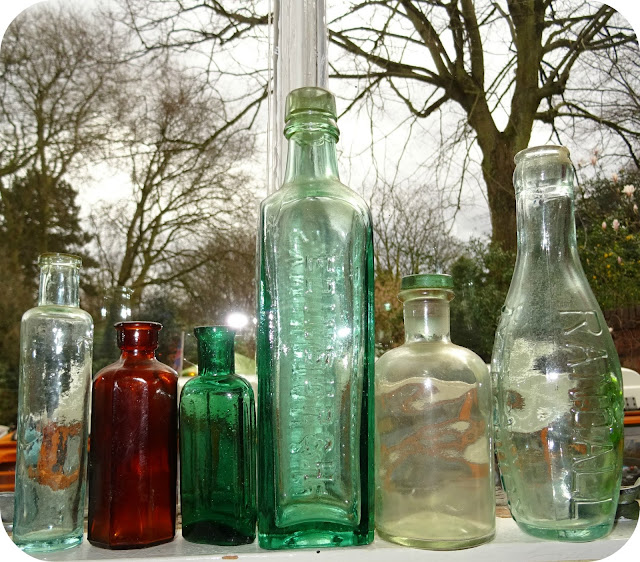 Glass bottles we dug up in the garden of our last house, a mid-Victorian terrace. 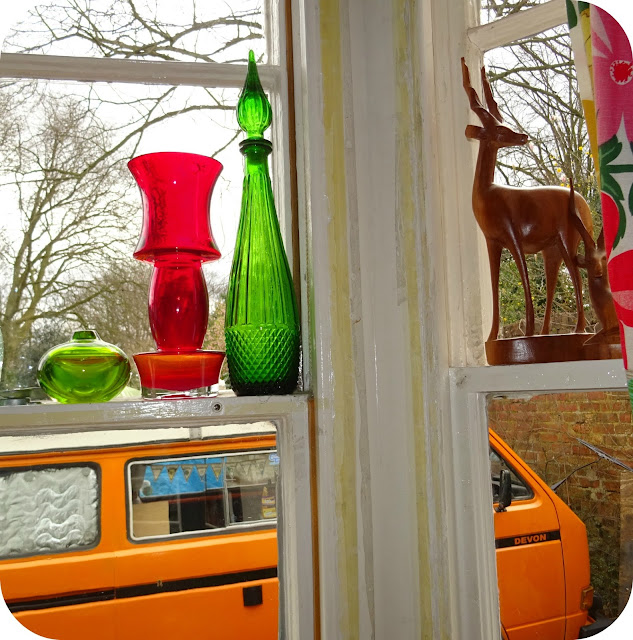 Vintage art glass and wooden antelopes, all bought from charity shops, car boot sales or given to us by friends over the last quarter of a century. 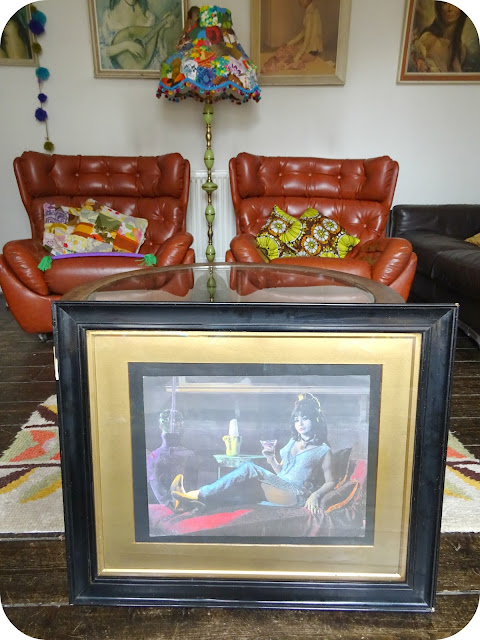 Another weekend makeover, a movie still bought from a flea market in India & featuring my idol Helen from the 1967 Bollywood spy hit, Jewel Thief, is now housed in a Victorian ebony frame which was salvaged from the parental home. It held a still-life advertisement for Pears Soap for as long as I've been alive! 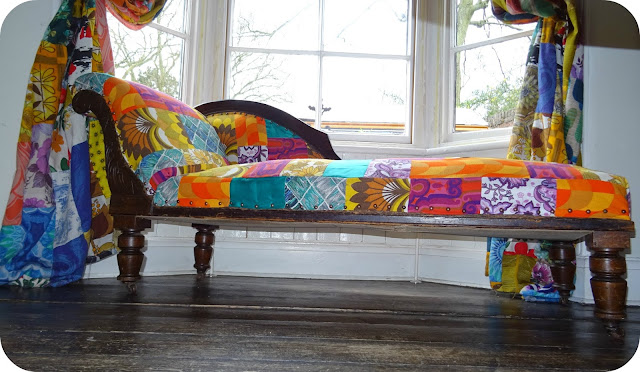 Moving furniture means lots of dusting and scrubbing down of woodwork, the subsequent cleaning took longer than the makeover. I think I've earned myself a cheeky Tuesday rum.