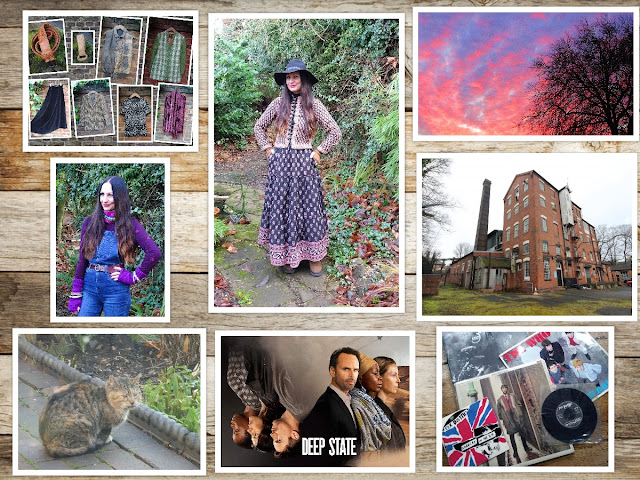 Sunday started in the usual way, with tea in bed and a longish lie-in with my current read. After breakfast, we drove down to the clearance charity shop to drop off a bag of donations which mostly consisted of Jon's old clothes following a radical sort-out. 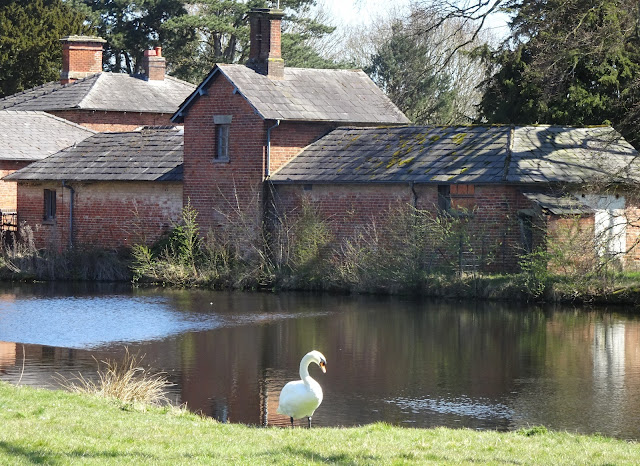 When we visited Shugborough last week, as always we were captivated by the beautiful swans so I couldn't leave the shop without purchasing this tray for £1. 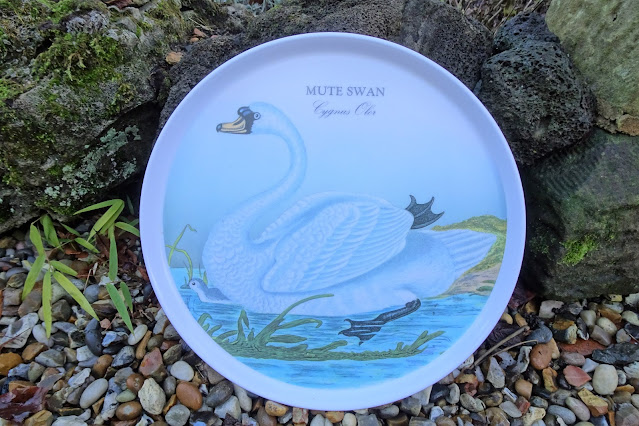 It's by the Welsh-English pottery designer, Susan Williams-Ellis for Portmerion. Susan (1919 -2007) was the daughter of the eminent architect, Sir Clough Williams-Ellis who founded the Italianate village of Portmerion in Wales, somewhere I've yet to visit.

Although I don't wear them, I like jeans. During the 1980s and 1990s, my go-to casual wear was tatty 1950s Levis worn with Doc Martens or Chelsea boots then, up until 2006, it was Topshop's Baxter skinnies tucked into '70s stack heeled tan leather boots accompanied by a vintage blouse and waistcoat or my trusty Levis, hacked off above the ankle with knee-length silk sari dresses, brought back from India, worn over the top. After my hip replacement I pretty much stopped wearing jeans, the fabric irritated my scar and dresses felt (and looked) better. 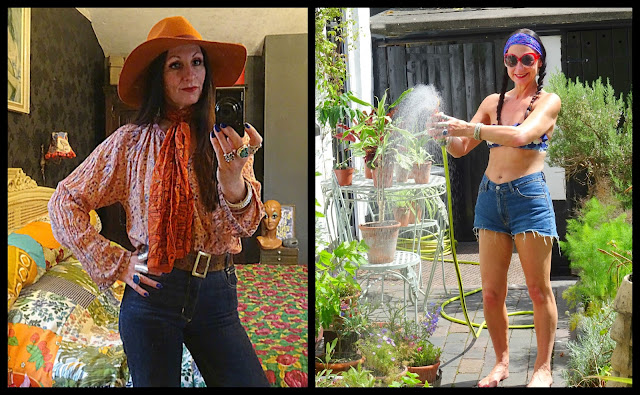 I've tried jeans over the years, my vintage Lois bellbottoms got loads of compliments but the fit wasn't quite right and my charity-shopped Diesel cut-offs never venture further than the garden. With two eight-foot rails crammed with women's jeans ranging in size from a UK 6 to a UK 36, I'm convinced that one day I'll find the perfect pair in the clearance charity shop but I have to be in the mood for wading through acres of tatty denim and on Sunday I was.

How exciting - a label that isn't Primark, Matalan, George at Asda or New Look! Lucky Brand is American although the sizing is English (they briefly sold through TopShop). The manufacturer's garment label inside describes them as "Overalls" but no self-respecting Brit would ever describe them that way - they're dungarees - derived from an Indian word commonly used in the 17th Century to describe a coarse cloth "dungri". The East India Company bought this cloth to make workwear trousers and added a British twist to the word, renaming it "dungaree".

There are no changing rooms in the charity shop but at £2 I was happy to risk it, I could always redonate them the following week. 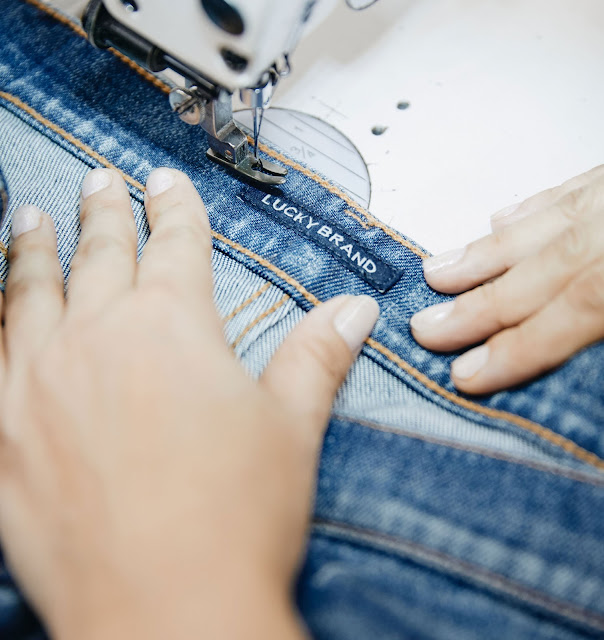 Lucky Brand claim to produce their denim responsibly, using solar power and rainwater during production and prioritising their worker's welfare. Their website requests customers to wear more than once before washing, to always use cold water and never to tumble. They recommend patching them when they wear out to make them your own and when they're no longer wearable as jeans, to cut them down into shorts or chop them up to use as patches. If you decide the style is no longer for you, they recommend donating to a charity or reselling to raise the funds for a replacement. 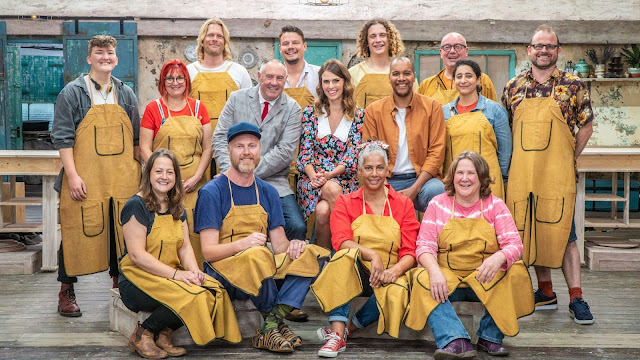 After lunch, we popped round to see Liz & Adrian and exchange Xmas presents as they'd both had Covid over the festive season and we'd not seen them since my birthday. Later, we watched The Pottery Throwdown, which we're slightly obsessed with. 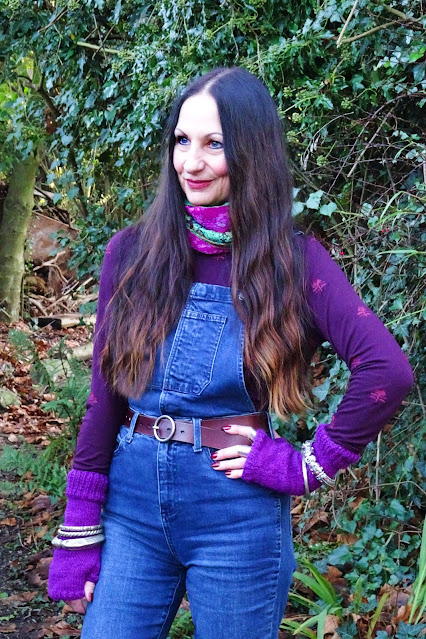 Monday was dedicated to eBay. Jon dropped off the parcels at the Post Office while I ironed, measured, photographed and listed some stock. And, of course, it seemed appropriate to work in my workwear, the previous day's Lucky Brand dungarees. 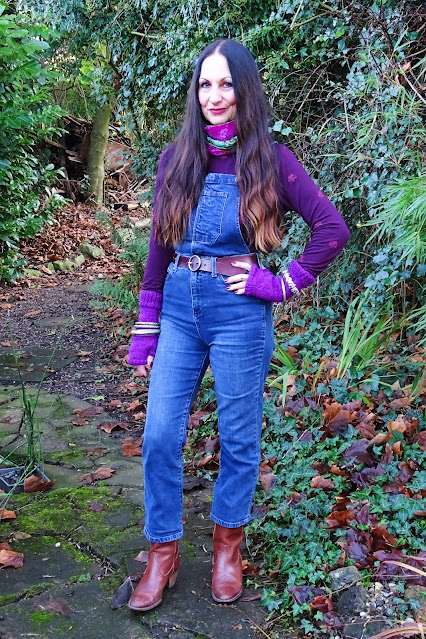 I'm wearing them with an embroidered polo neck jumper from East, my Toast cowboy boots, wool beer mittens Liz made me and a silk Kantha scarf I bought in Jodphur in 2020 BC (before Covid). I think I'll ditch the belt next time. 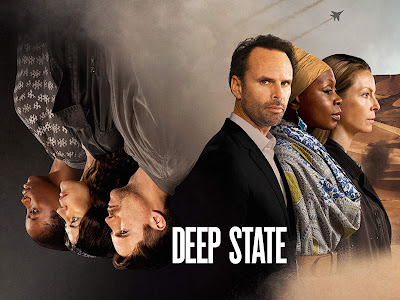 After five hours of hard labour, I settled down in the lounge with my book. The evening's entertainment consisted of a glass of dry sherry, the Antique's Road Trip and two episodes of the second series of Deep State.

It was back to icy conditions and thick frost on Tuesday morning but the sunrise was mesmerising so much so that I had to wake Jon up to share it. 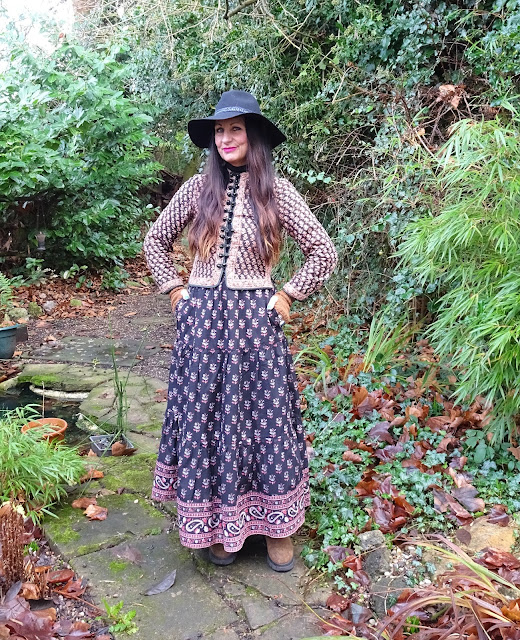 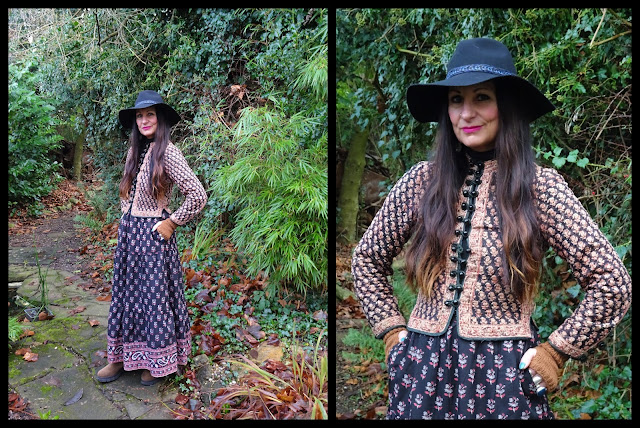 I did have a coat over the top of my quilted jacket plus thermal leggings & polo neck, cashmere wristwarmers and two pairs of socks, the skirt is already lined but I added an underskirt for an extra layer. 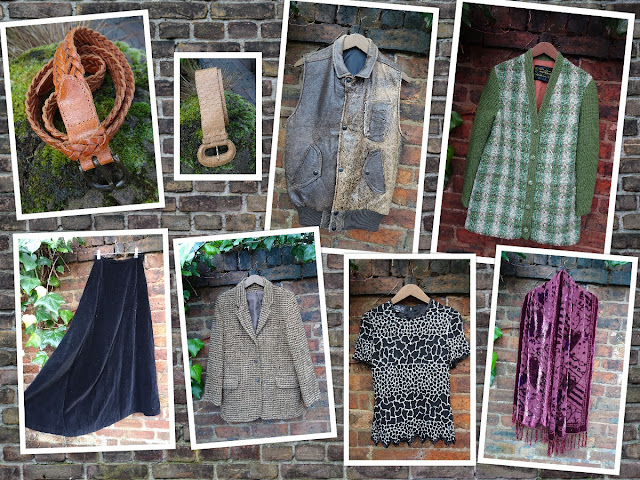 After so long in lockdown I still get a thrill every time I set foot in a charity shop, I don't even need to find anything, I just love the possibility that I might. Tuesday morning's finds included two leather belts, one by St Michael, another by Fashion Ways of London, a 1980s antiqued leather waistcoat (remember those flying jackets all the cool kids wore?), a burnt-out velvet scarf, an After Six by Roland Joyce 1980s beaded cocktail top, a 1980s Sixth Sense (C&A) wool blazer, a 1970s cotton velvet maxi skirt and the star of the show, a 1950s Irish Tweed lined cardi (coatigan), which Jon found. 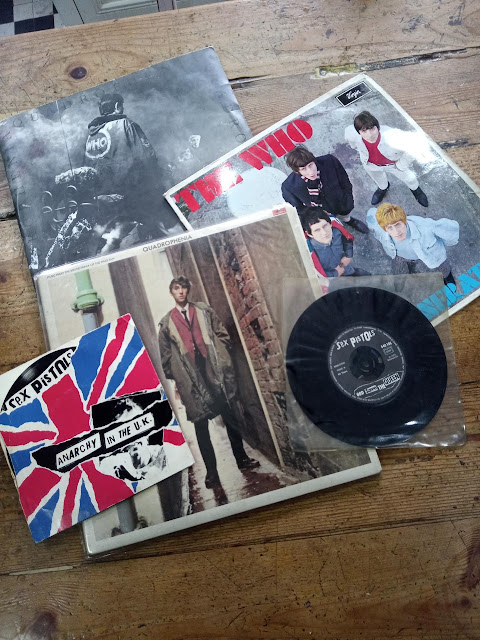 Someone who must have been our age had donated their record collection and we spent an enjoyable half-hour leafing through the vinyl we bought the first time round and still own including The Dead Kennedys, The Specials, The Beat, and The Ruts. Lord Jon snaffled this little lot. 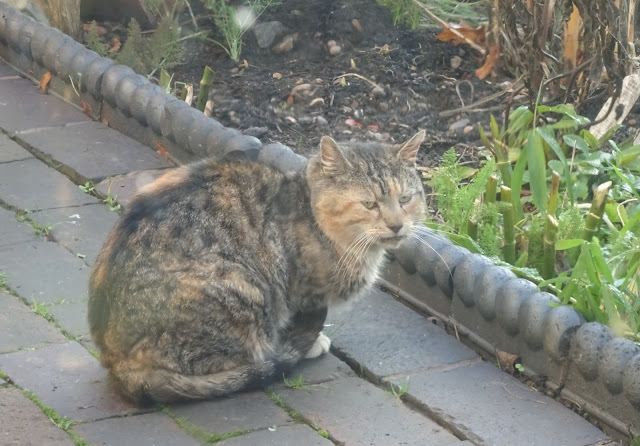 Cat news! We'd not seen our little visitor since Stephen scared him away on Sunday morning. Jon left a bowl of food out when we went shopping and he was just finishing it off when we got back. He retreated to the rockery to wait for the bowl to be replenished, which again was polished off in minutes. When we went for our walk on Saturday morning we spotted him squeezing through the gates of the derelict Highgate Brewery, so if he's not a member of the cat colony who lives in the old windmill, he might be roughing it in here. 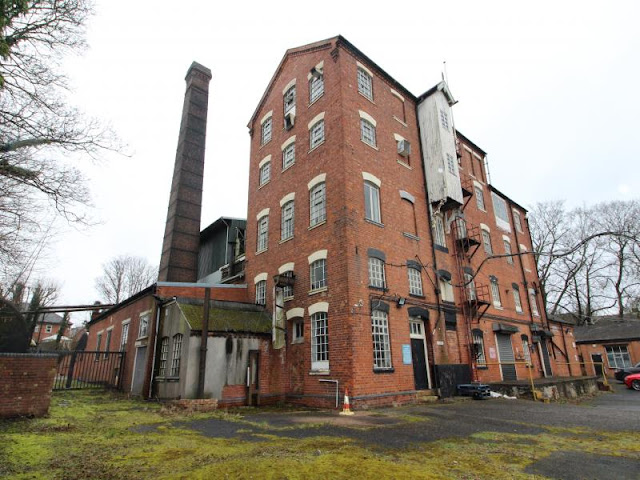 I'm off to peruse the National Trust guide, a day out beckons.
See you soon!
Posted by Vix at Tuesday, January 18, 2022

Email ThisBlogThis!Share to TwitterShare to FacebookShare to Pinterest
Labels: Charity Shopping, It's All About Me, Out and About, Outfit