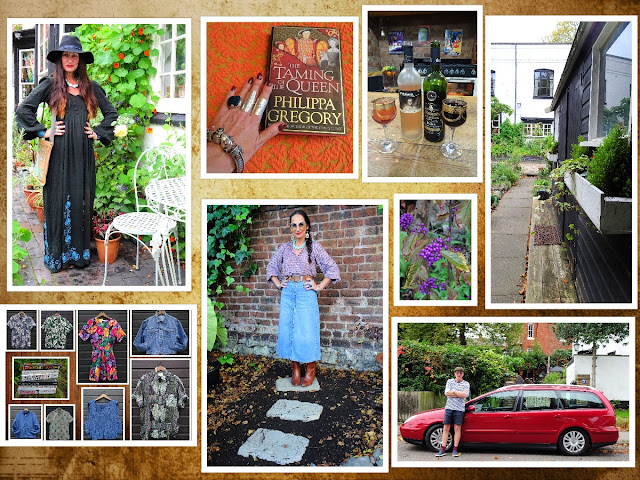 I was astounded to wake up on Saturday morning and discover it was 8.50am! After tea in bed, courtesy of Lord Jon, I stripped and changed the bed and hurriedly got dressed as we were expecting visitors, a lovely couple we met at a festival seven years ago who were passing by on their way to Birmingham's NEC and asked if they could call in. After an hour's catch-up, we had a late breakfast of buttered crumpets and spent the rest of the day in the garden, planting bulbs, sweeping up leaves and planting up the Kinky Shed windowboxes with the Goldcrest mini conifers I'd used last Autumn, ivy dug up from the garden and four cyclamens Jon had snaffled for £1 from Morrisons when he'd done the shopping the previous day. 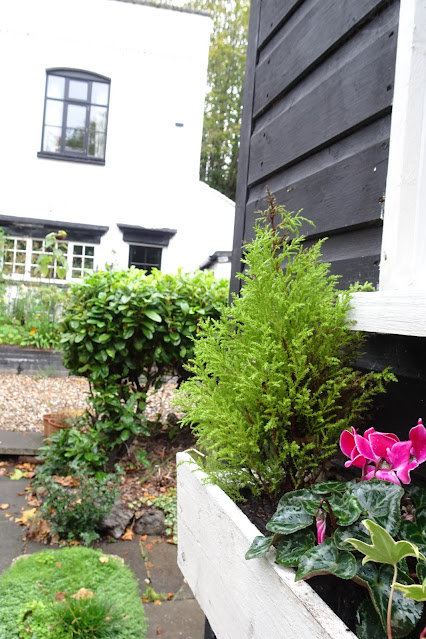 The garden is still blooming madly, another showing for our Dusky Maidens delphiniums, dahlias galore, and Choca Mocha cosmos going berserk. I can't believe the 10p begonias, petunias & penstemon we'd bought from Wilko back in May are still all in flower, too. 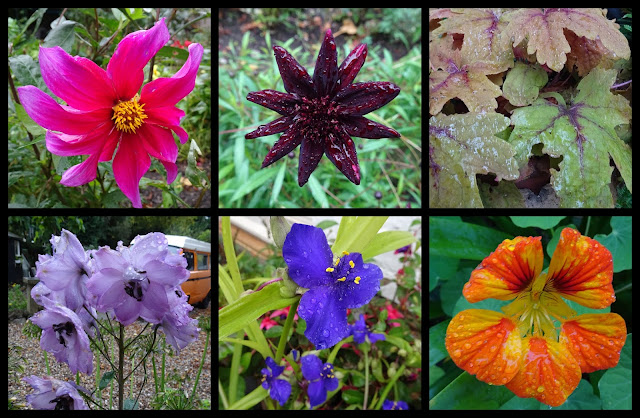 Half of our geraniums are still blooming, too. We cut down the spent ones, repotted them and moved them to the utility room windowsill where they'll hopefully survive the winter. 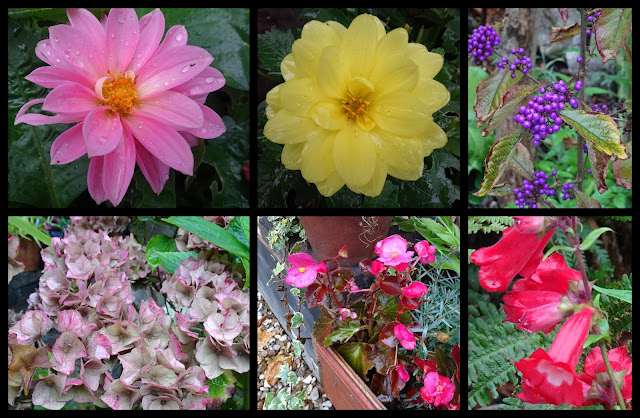 As promised, here's Patrice, our newest old car, an 18-year-old Citroen C5 in Lucifer Red with two owners from new and a full-service history. We discovered Lynyrd Skynyrd's greatest hits still inside the CD player so we reckon he's a bit of an old rocker on the quiet. Jon's come over all Gallic with his Breton top and beret - it's either Patrice's influence or the anticipation of seeing The French Dispatch later this week. 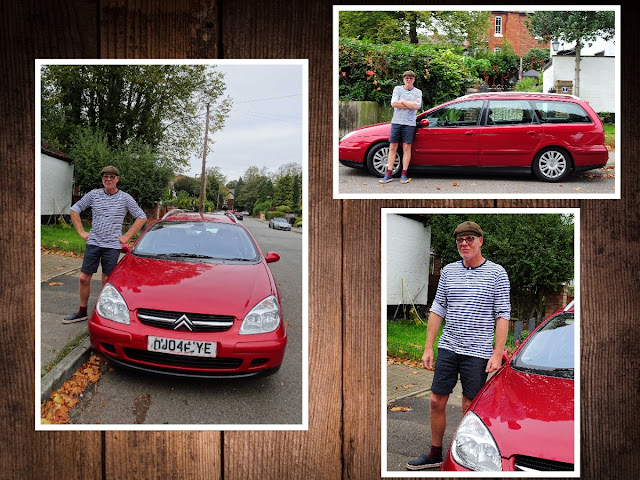 After pizza and potato wedges roasted in a homemade salsa sauce made with homegrown tomatoes, chillies, onions, garlic and capsicums, we cracked open the rum and finally rewatched O Brother Where Art Thou? which was just as brilliant as we remembered. 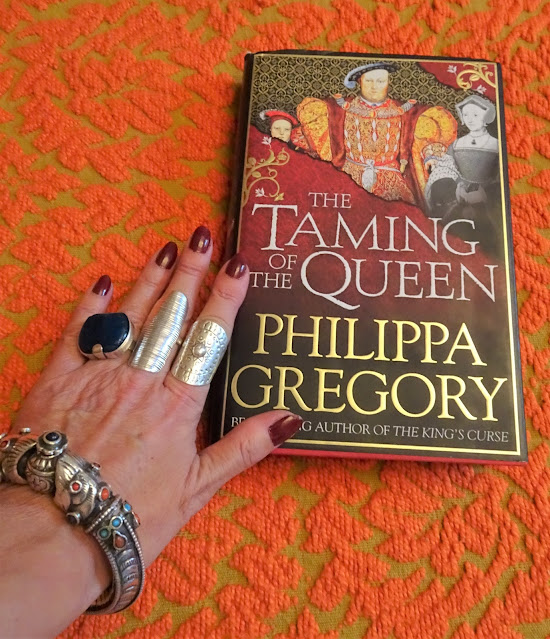 Sunday started off with tea in bed and a leisurely hour of reading. I was very excited to see a reference to poor Margaret Pole, Jon's 16x great aunt, in my current book (courtesy of my friend, Dawn)- another of his ancestors executed by Henry VIII. After veggie sausage sandwiches eaten whilst watching the Andrew Marr Show, we gathered our bag of donations and headed to the clearance charity shop to drop them off and were pleased to see that a lot more people were wearing masks. 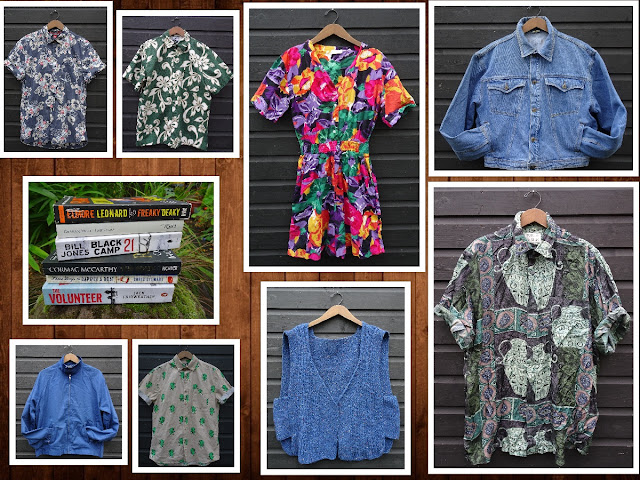 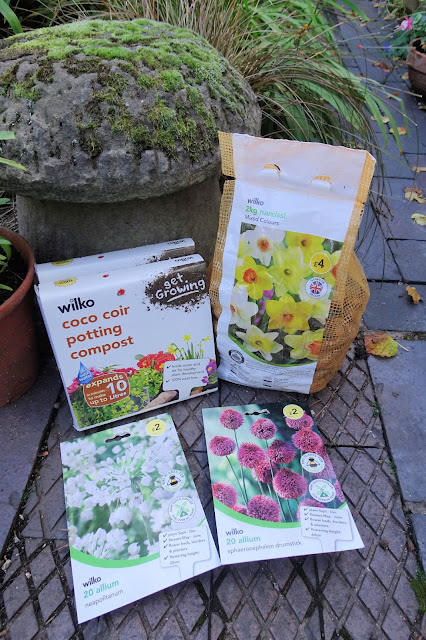 We popped into Wilkos and bought soda crystals, bulbs (of the electrical and botanical variety) and some rather intriguing looking compost made from coir to which you add water and it expands to 10 litres. 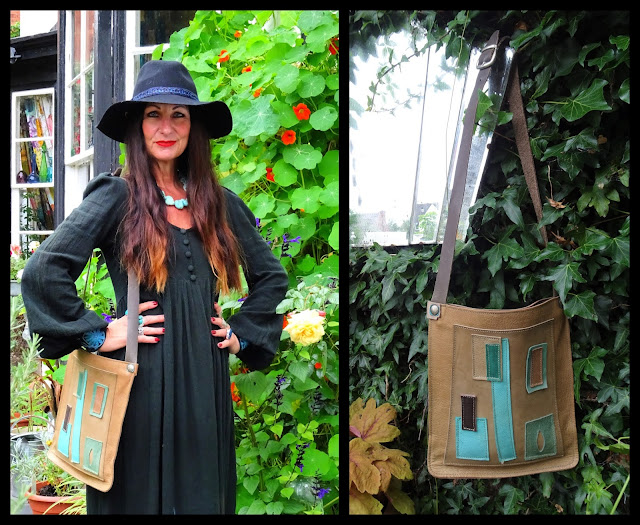 Sunday started off mild and dull and rapidly descended into miserably wet, putting paid to our plans to plant more bulbs. I wore the 1960s Ayesha Davar embroidered cheesecloth dress I'd found on eBay back in August & used the amazing vintage leather bag Lynn had given me when she & Philip visited us last month. (As you can see, the Empress of India nasturtiums show no sign of dying off.) 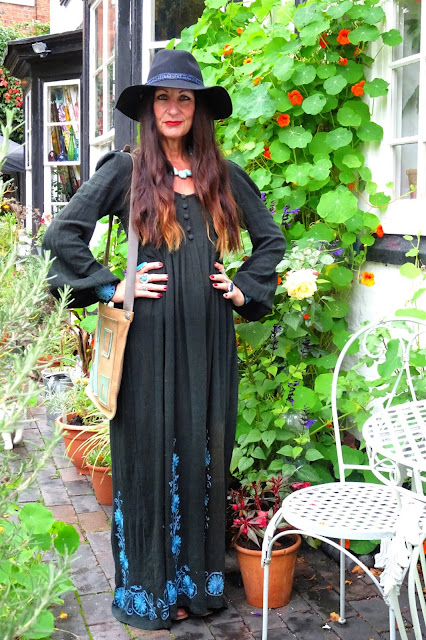 After an afternoon of eBay wrapping and blog reading, we had toasted sandwiches for tea and caught up with Ambulance on the i-player. 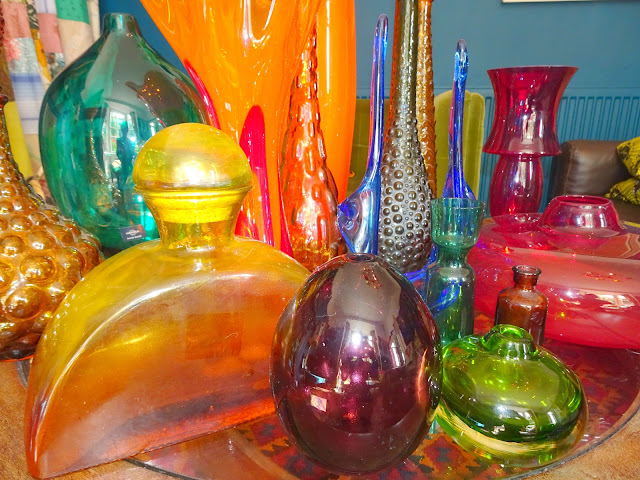 After Monday's Wii Fit workout I washed the vintage glass and scrubbed the window frames ready for Jon to fit the poor man's double glazing (plastic window film) at some point this week. 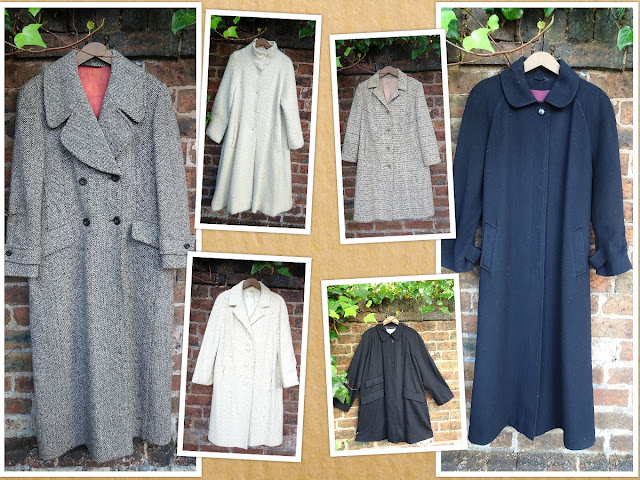 As the weather was playing nicely, I photographed and listed some coats while Jon did the Post Office run. As you can see, we use the garden wall as a backdrop for our eBay photos and to reach it involves walking over a border, which invariably leads to muddy feet. Jon had laid cardboard down but I had a better idea. Back in the summer, I'd spotted some stepping stones on special offer at our local garden centre so we had a drive up after lunch and were pleased to see that they were still there. 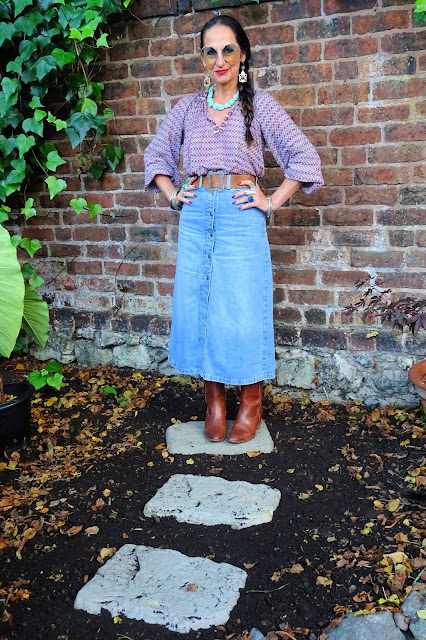 Et voila! Hopefully no more muddy feet. We'll be planting daffs in this bit soon and keeping the bees happy when Spring arrives. 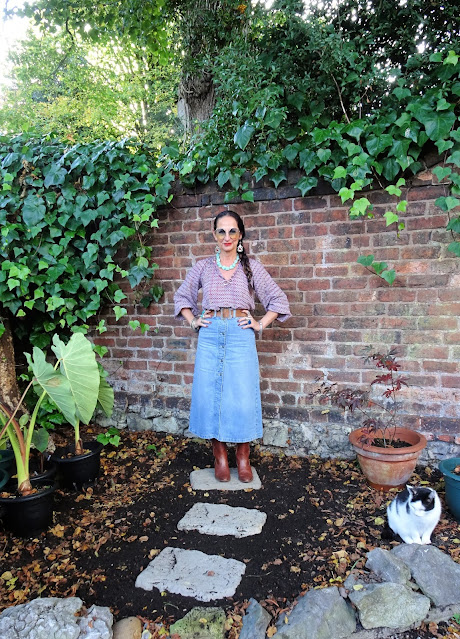 My skirt's new (well, new to me, not new new!) When I was away I saw a Greek woman looking fabulous in a sun-bleached, vintage-looking denim skirt and scoured eBay for something similar when I got home. Mine's 100% cotton (no horrible lycra) so it should get better and better with age. 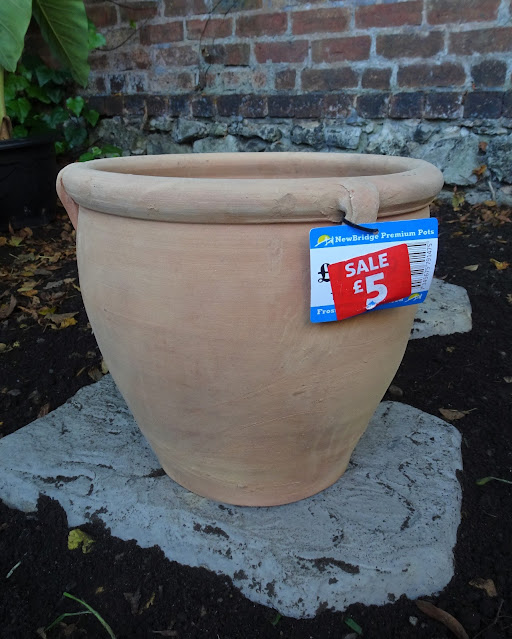 I couldn't resist snaffling this terracotta pot from the garden centre's bargain corner. 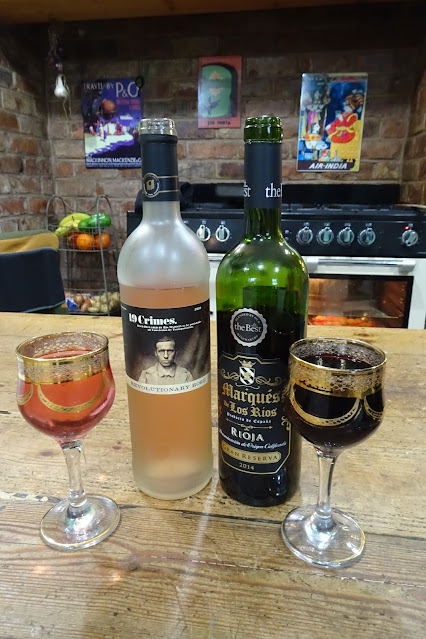 Tonight we've had roasted halloumi and veg for tea and cracked open the wine, Rioja for Jon and Revolutionary Rose for me. 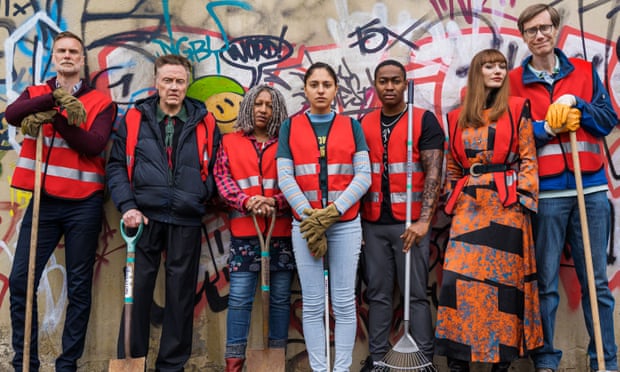 Tonight we'll be watching The Outlaws. I hope it lives up to the hype.
See you soon!
Posted by Vix at Monday, October 25, 2021

Email ThisBlogThis!Share to TwitterShare to FacebookShare to Pinterest
Labels: Books, Charity Shopping, ebay, Gardening, It's All About Me, Jon, Kinky Melon, Out and About, Outfit