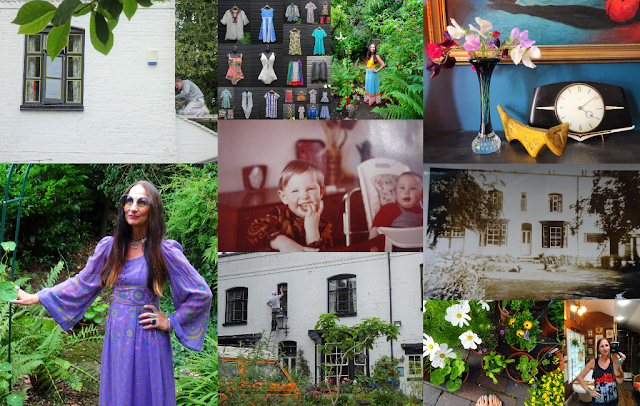 After the washout that was Friday, the painter & decorators had been in touch to say that they'd be starting on the upstairs exterior window frames on Saturday morning. Jon was up first making tea, seeing to the lads and getting breakfast ready whilst I stripped and changed the bed, loaded the washing machine & pegged the laundry out on the line. We'd just eaten our sausage sandwiches when they turned up and started work. 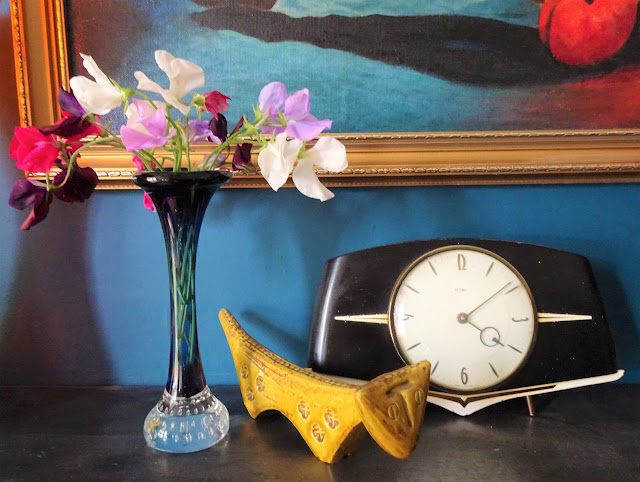 Monty had reminded us to cut our sweet peas on Gardeners' World so I dashed down the garden with my scissors. It's the first time we've grown any - we usually make do with the naturalised wood peas - and although they smell lovely I'm somewhat underwhelmed, I think we sowed them in too shady a spot. They do look good in the vintage Swedish Art Glass bud vase we found on our travels on Thursday. 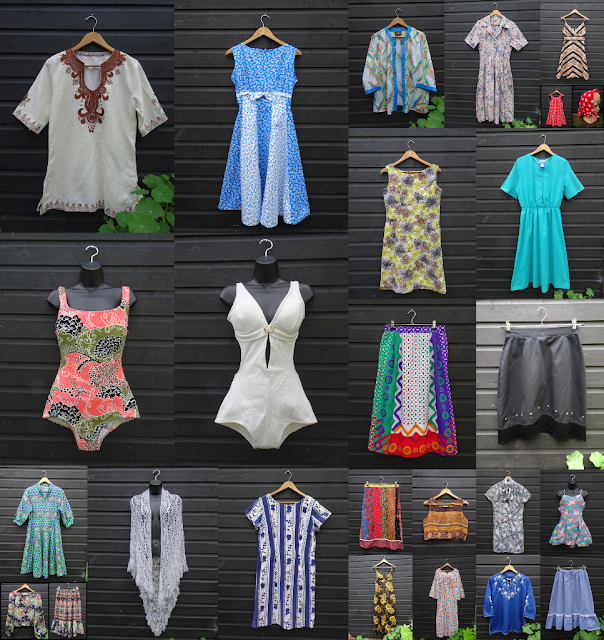 I had a rummage through the Kinky Shed and discovered a sack of summer stock I'd packed away two years ago and forgotten. I spent the day ironing, measuring, photographing and uploading everything to eBay and trying my damndest not to slip anything in my wardrobe - 1970s chambray midi skirt, I'm looking at you! Jon mopped the kitchen floor, dashed down the garden to rescue the washing from one of several sharp showers and kept the workers in tea. 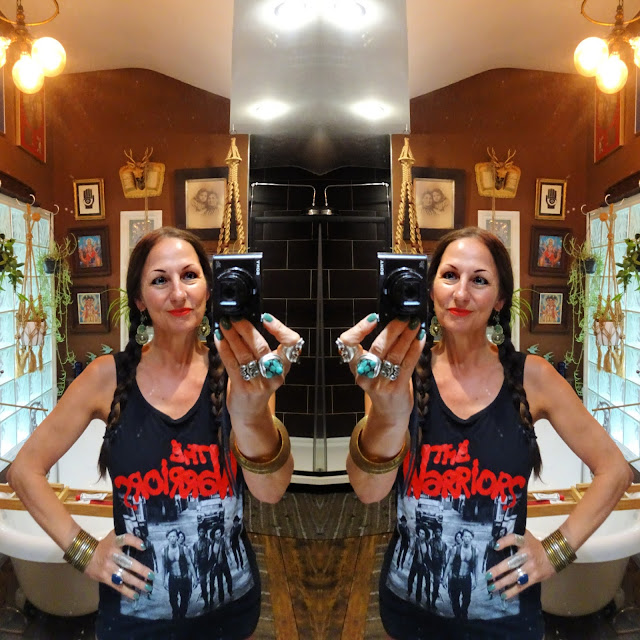 We didn't have a video player when I lived at home so watching a film at friends' houses who were lucky enough to own such luxuries was a real treat as a teenager.  A mate's parents owned a video shop (Metro Video, opposite the Royal Hotel, to any Walsall folk reading this) and I loved helping him out. We used to watch The Warriors on repeat, an American Sci-Fi thriller from 1979 based on the 1965 novel of the same name. A fellow teenage misfit, Jon also loved it and was excited to find this vintage vest on Thursday. He can't get it over his shoulders so again, I'm breaking the fashion police rules and wearing something I remember the first time round. 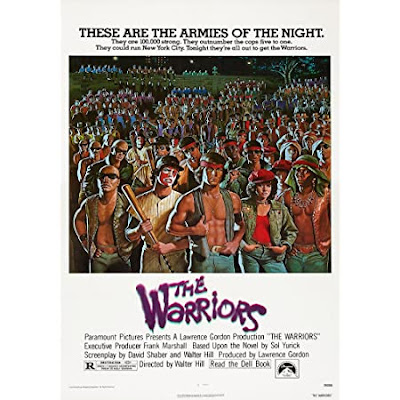 Tea was a vegeburger with salad accompanied by a bottle of San Miguel. 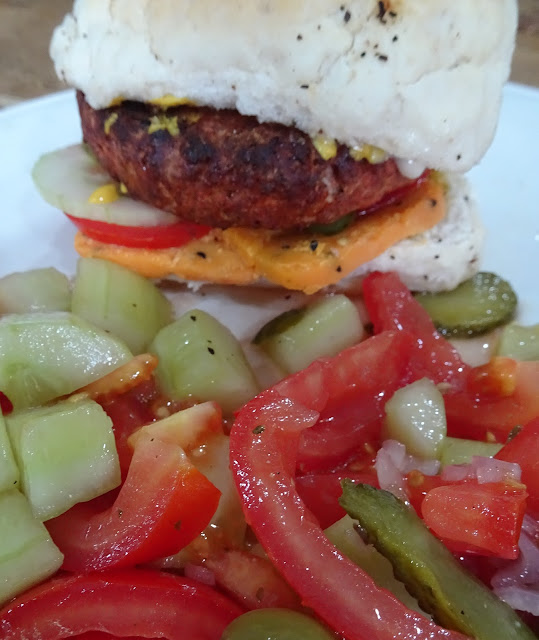 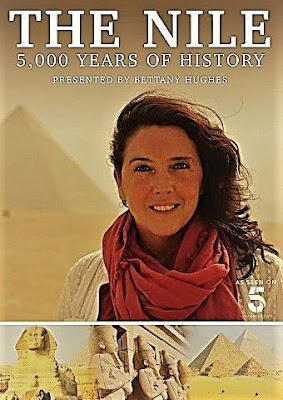 The painters (Stuart & Ben) were due at 9am on Sunday morning although it was so miserable and damp when I got up I thought work might be rained off for the day. I made tea, brought it back to bed and read until just gone 8am. Once we were up I painted my nails in Barry M's Sour Candy. 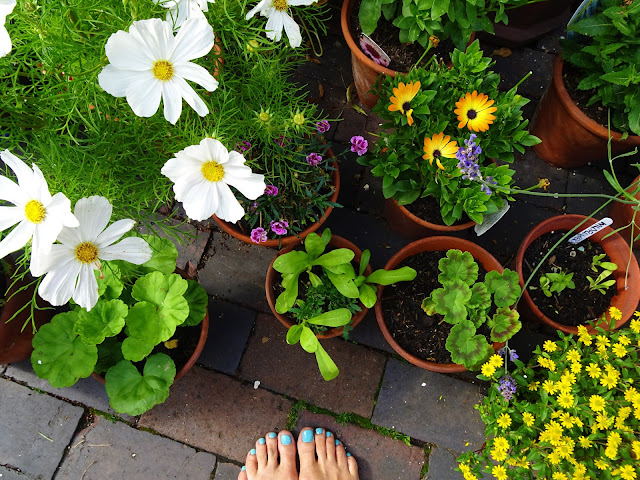 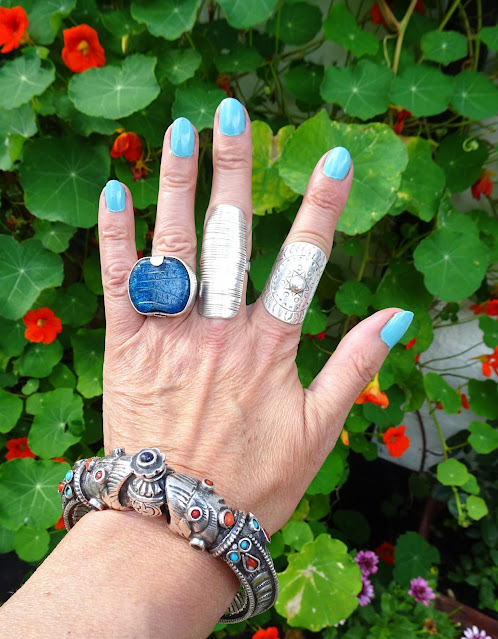 By the time we'd eaten our toast, the rain had stopped and work had already started. We left Stuart & Ben to it and drove down to the charity shop. We'd had a rummage around and filled a donation bag with a couple of bolster covers, a paperback, a teeshirt and a keyring. 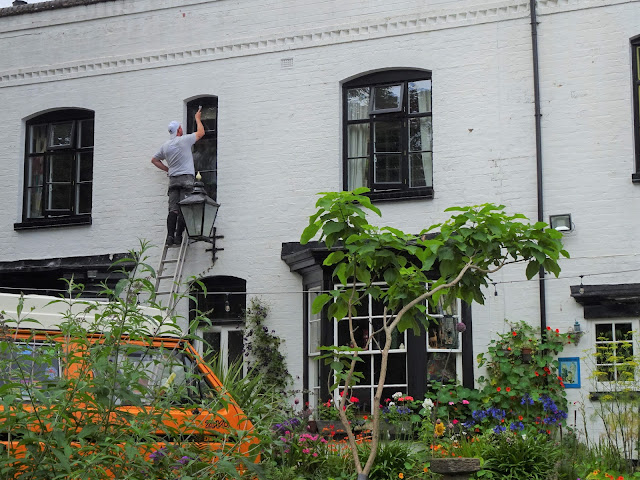 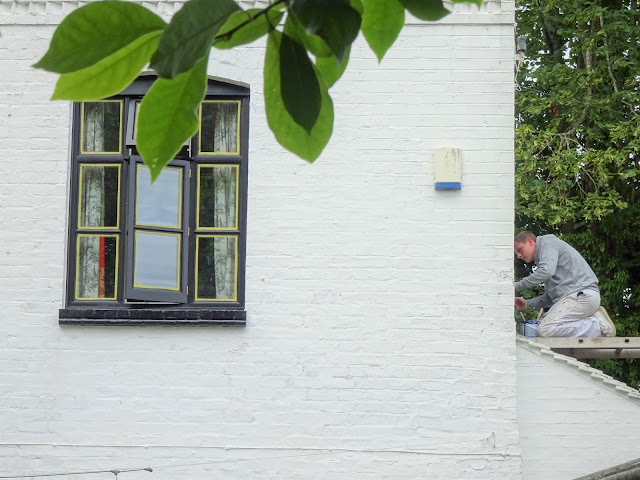 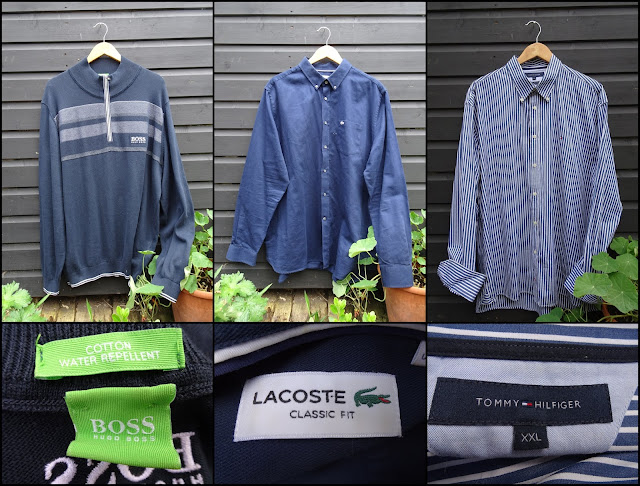 After last week's meagre pickings (two teeshirts and a solitary paperback), we were very happy with the morning's finds. The five Hugo Boss cotton, merino wool and virgin wool jumpers along with the Lacoste and Tommy Hilfiger cotton shirts are all current stock and bought new would have cost almost £1000! Several don't look like they've ever been worn, they're immaculate. 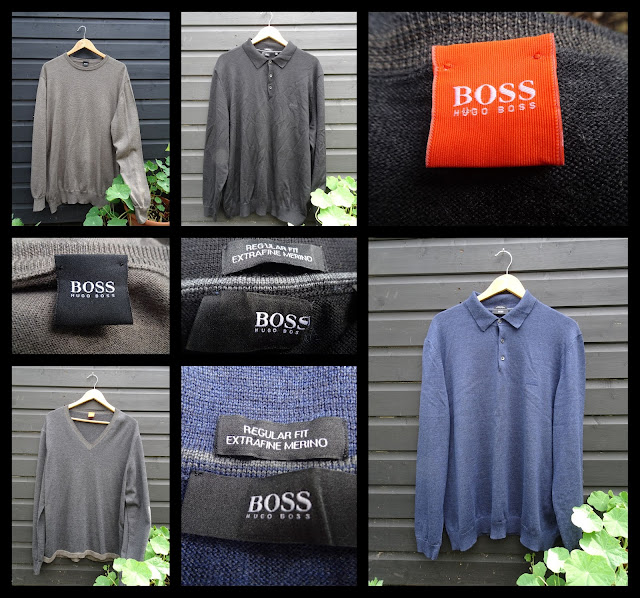 Jon couldn't resist these brand new The Big Lebowski socks. Like most charity shops, the stock is mostly of the cheap & nasty high street synthetic variety and the good quality pieces stand out a mile. When I spot a bit of decent fabric I can't help myself. The leather Gharani Strok grab bag, the brand new Earth Origins recycled slippers (RRP £48) and the crisp cotton mix blouse with fancy sleeves from Los Angeles label, Shelli Segal, all came back with us. 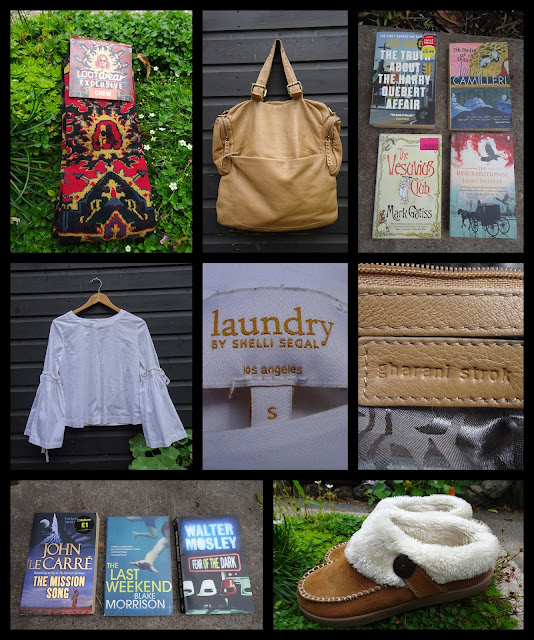 There were so many good books we had to reign ourselves in - everything from historical crime to Inspector Montalbano and even a Le Carre we've not read! 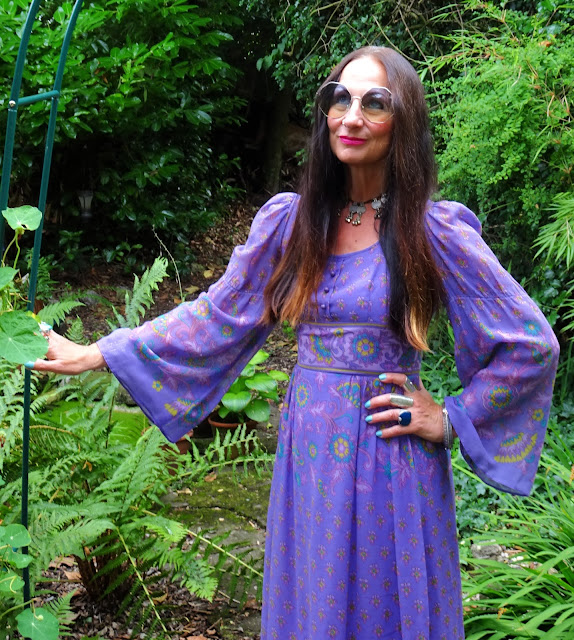 Goodness knows how many times this 1960s Dollyrockers gauzy cotton maxi has featured on the blog, I bought it in 2009 and still love it to bits. 'Scuse the fluffy hair, it was still damp when I went to bed. 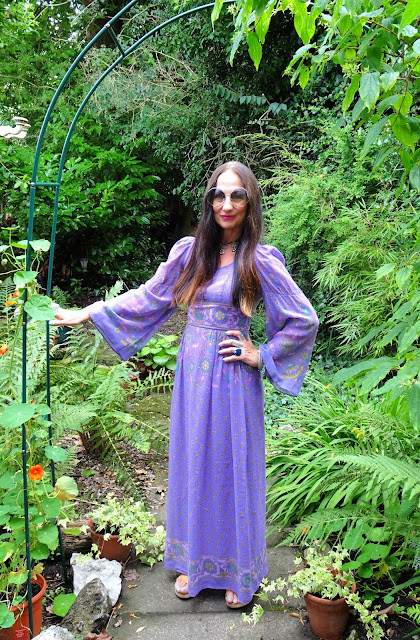 After popping to Wilkos for mailing bags, Waterstones for a birthday present and swinging by Liz & Al's for coffee, cake, an inspection of the garden and to meet Thunder, the chinchilla they're babysitting, it was lunchtime when we got back. The chaps were cracking on at a fine old pace. After a damp start the afternoon had turned out rather lovely so I pottered around the garden and then plonked myself on the bench and read my book. By 5pm the work was complete and we were thrilled (nice work, SB Decorating Services). This was how Stonecroft looked last week (with white window frames upstairs)... 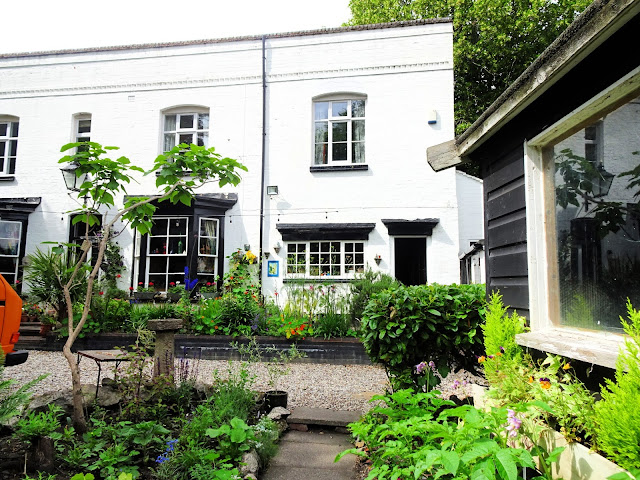 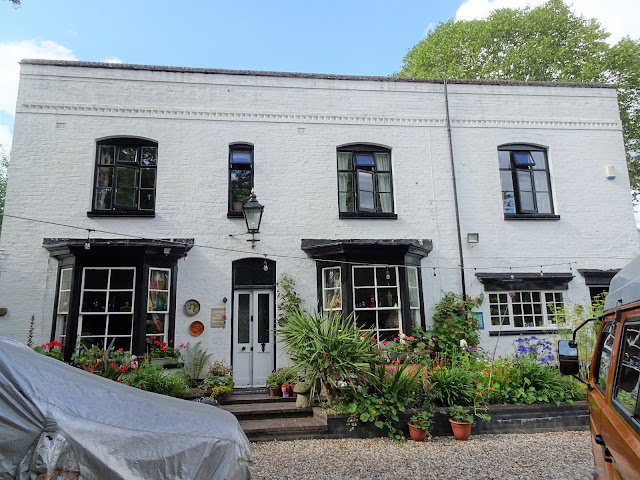 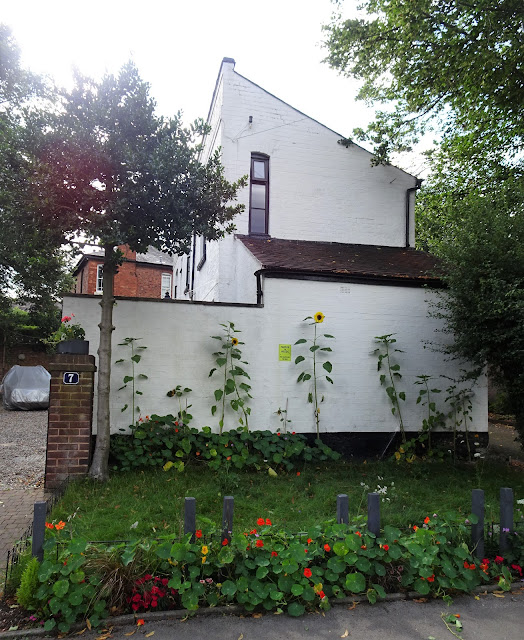 This photo was taken in 1952 shortly after my grandparents moved here... 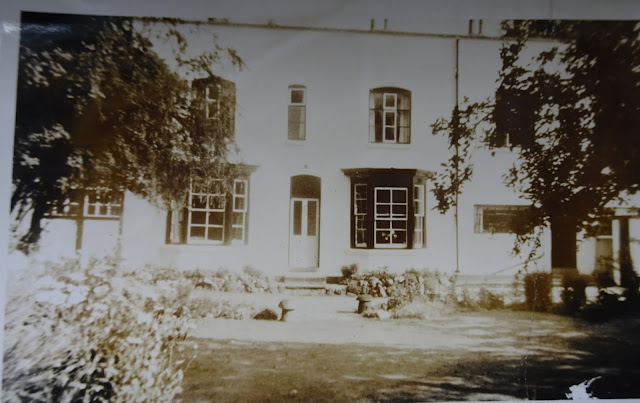 And this is how it looked in 1980. I loved the shutters but by the time we bought Stonecroft they were too far gone to restore. Jon and I were giggling at the planting, it looks like something from a council-maintained flower bed and he should know, he worked for Walsall Parks Department until pop stardom lured him away. 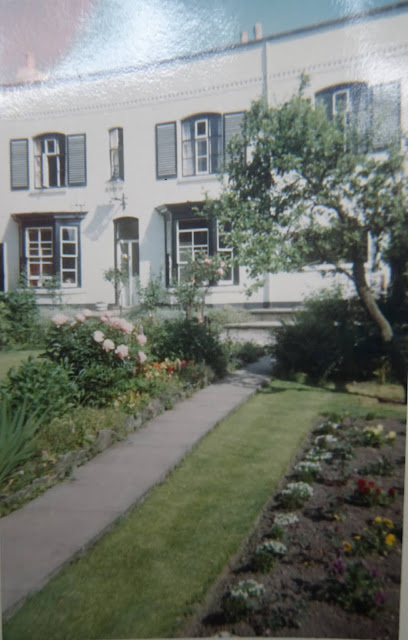 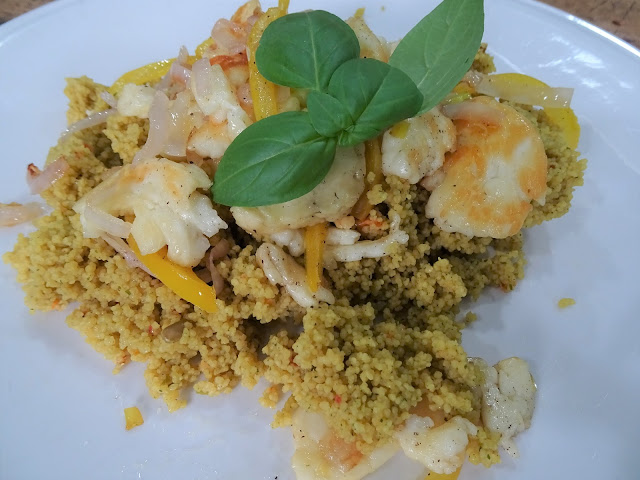 Monday got off to a bright & sunny start. I harvested a fistful of strawberries and hung the washing I'd chucked in the machine before bed on the line before doing my Wii Fit workout and wrapping the eBay sales. After breakfast, Jon left to do the post office run, supermarket shop and for his weekly coffee round at Tony's leaving me harvesting nasturtium seeds for what will be our third jar of Poor Man's Capers. 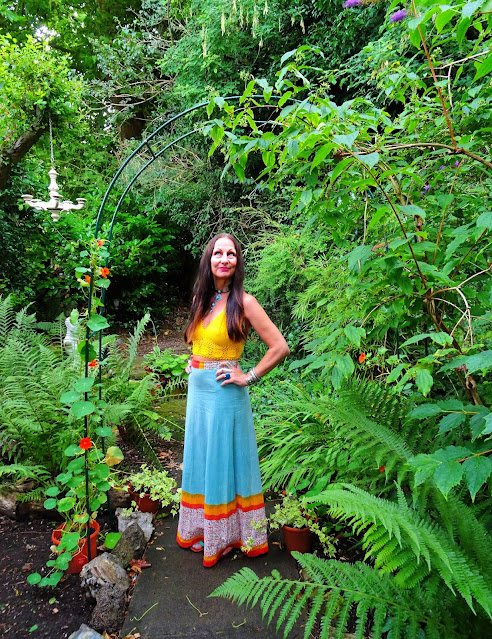 I haven't worn this early '70s Anokhi skirt since our trip to Crete last September. 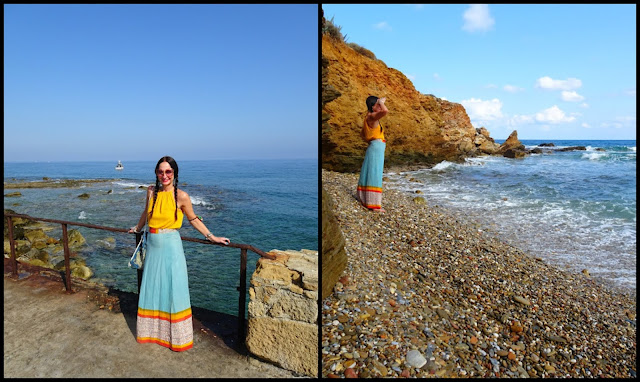 Yellow seems like the perfect choice to wear with it, in Greece I wore a cami from the clearance charity shop and in Walsall, it's the turn of a crochet bralet bought from the roadside in Goa back in 2016. 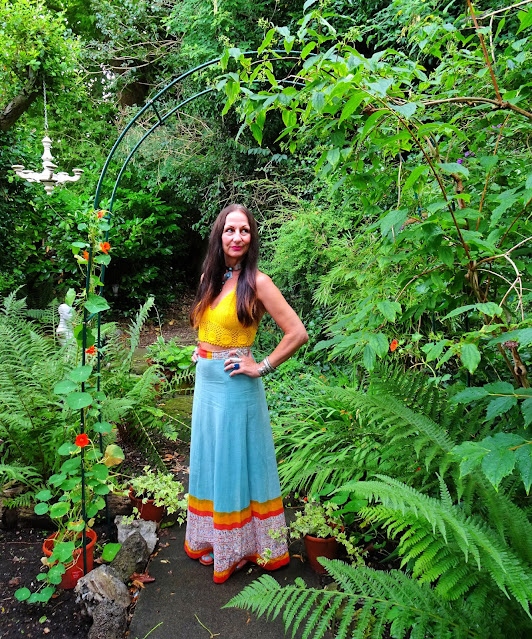 I looked out some stock from the Kinky Shed, ironed and measured it but my photography plans were thwarted by a torrential downpour which had me dashing down the garden to rescue the washing. After lunch, the rain had stopped and I was able to photograph and upload everything to eBay while Jon cracked on with the end of year accounts.

It's my brother's birthday today. He'd kill me if I share a recent photo on my blog so here's one of us from 1969. How cool's my paisley dress? Happy Birthday, little bro! 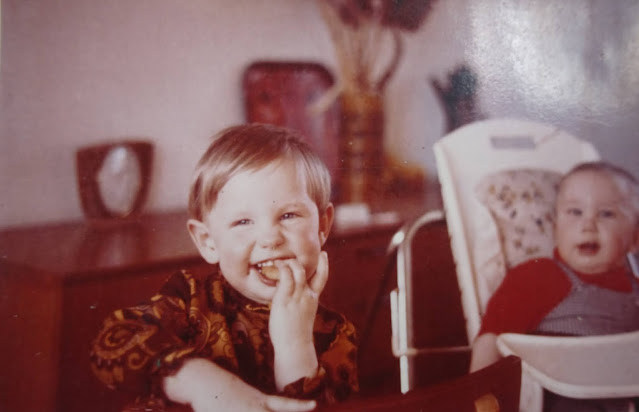 I spent the rest of the afternoon catching up with Blogland and touching up my roots, meeting Jon in the kitchen at 5pm for beer and pizza. 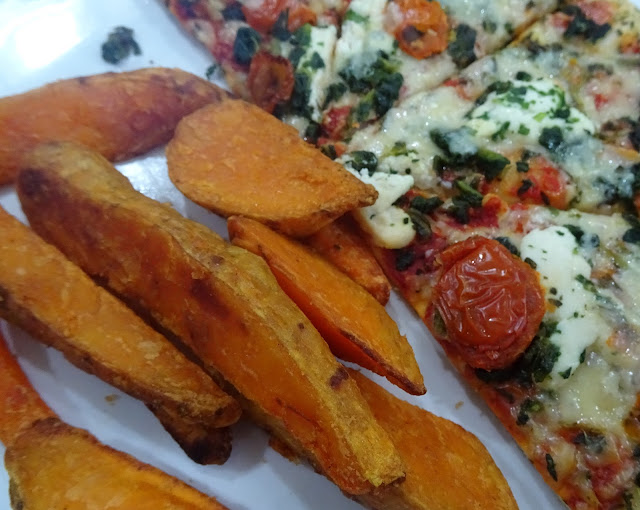 I'm off to find something interesting to watch. See you soon!
Posted by Vix at Monday, August 02, 2021