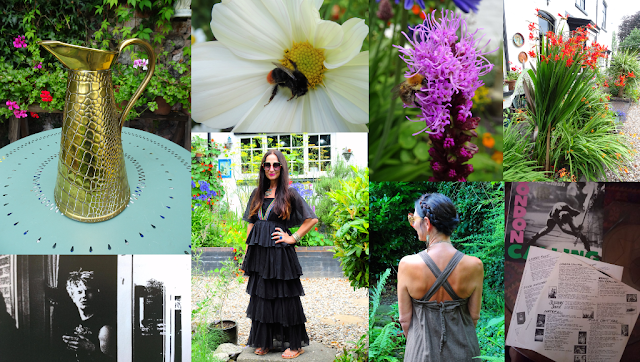 eBay parcels wrapped, Wii Fit workout done and nothing pressing on our to-do list, on Tuesday we headed to our favourite Black Country town for a charity shop fix. 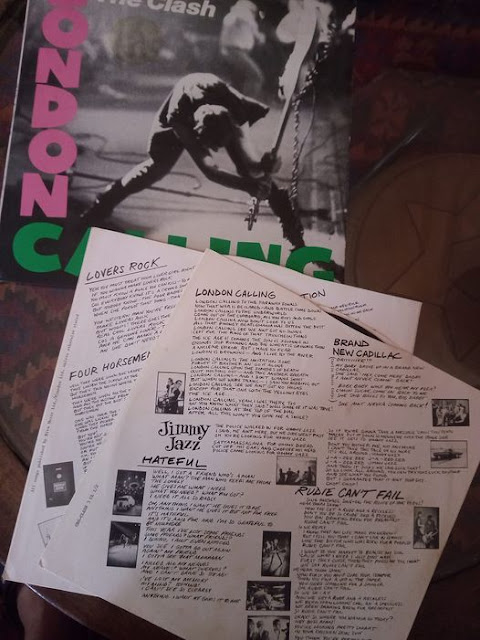 We managed to find something in almost every shop we visited but, engrossed in a rail of dresses in the final one, I overheard Jon telling Jane, our favourite volunteer, that his year had just been made. Nestled in the 50p album crate, amongst the Jim Reeves, Val Doonican and K-Tel country and western compilations, he'd only gone and found himself a copy of The Clash's iconic double-album London Calling in unplayed condition. To further add to the excitement he discovered tintom etched on the dead wax (the bit between the grooves and the label), meaning it was the first pressing.

An original punk, Jon (with his natural blond hair, above) bought London Calling when it was released in 1979 but swapped it with a mate for something else and never managed to find a replacement.

Those prices are insane!! Not that it's going anywhere. It's Jon's birthday tomorrow, he couldn't have bought himself a better present. 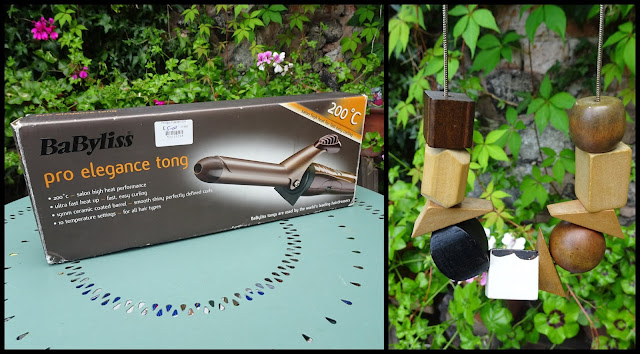 I treated myself to these Babyliss tongs (PAT tested, never used) and these chunky wooden beads (originally Freedom @Topshop). 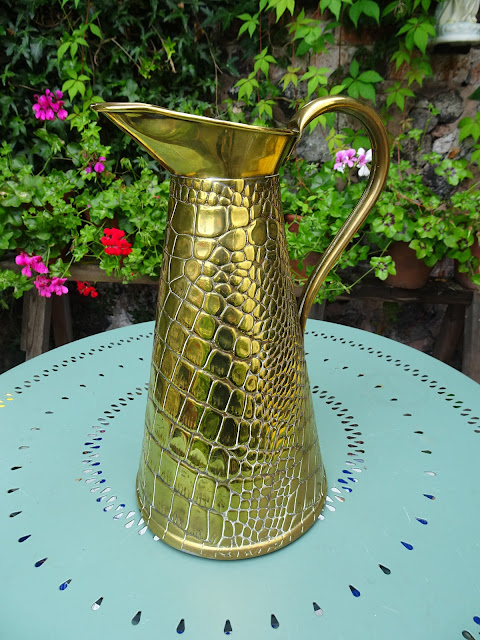 A proper antique! I couldn't resist this solid brass hot water jug in the Lizard pattern, made between 1890 and 1910. Stamped JS & S (which stands for Joseph Sankey & Sons), these lizard pattern jugs came in three sizes, 3, 4 and 5, mine is stamped 4 and stands 10" tall. 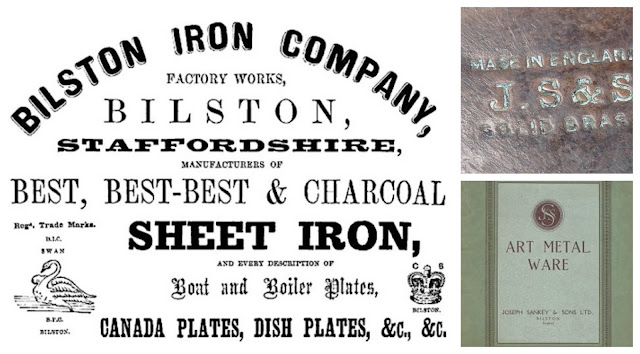 Joseph Sankey and Sons were a Black Country institution. Although my jug is of the Arts & Crafts aesthetic, it's in the style of rather than the real thing as these jugs were produced in their thousands and proper Arts and Crafts design is unique and handmade. It's still a gorgeous bit of Black Country history though and a bargain at £9.95! 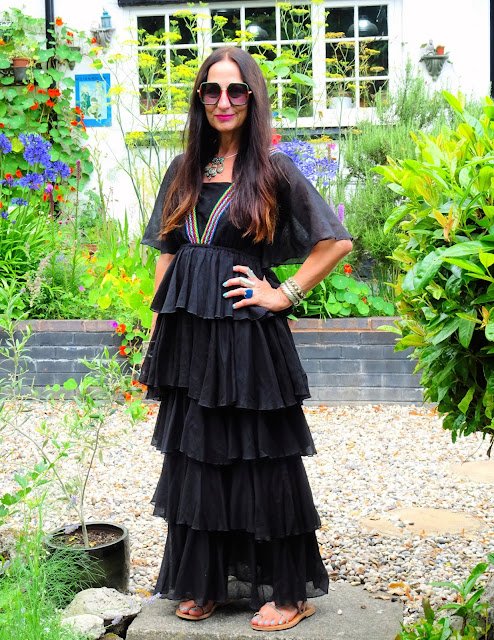 With a warm(ish) and dry (ish) day forecast, I wore my Pitusa cotton maxi dress I'd bought from the same town a couple of months earlier for a bargainous £3. People kept stopping me and going into raptures over it, asking where it was from. I took great delight at pointing at the Barnardos charity shop and saying, Over there! 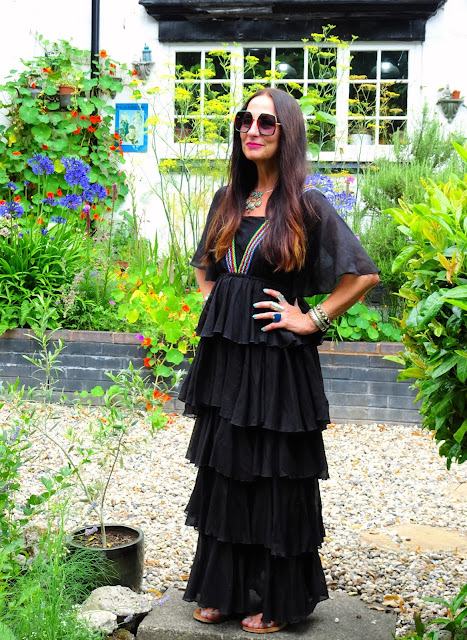 I'm not used to all these ruffles, it's rather daft and over the top and an absolute delight to wear. 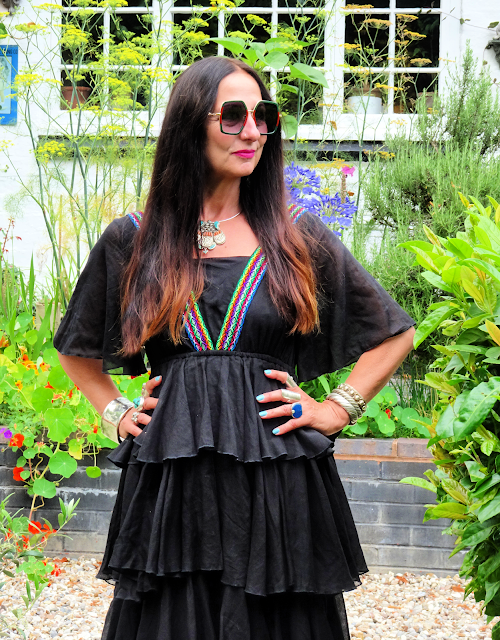 The weather stayed warm and dry all afternoon. Jon did some car stuff, I pulled up the bindweed and spent the remainder of the day reading on the lawn. Tea was half a quiche with some salad. Later, we continued to watch My Unique B&B on the BBC iplayer which we'd enjoyed the previous evening. 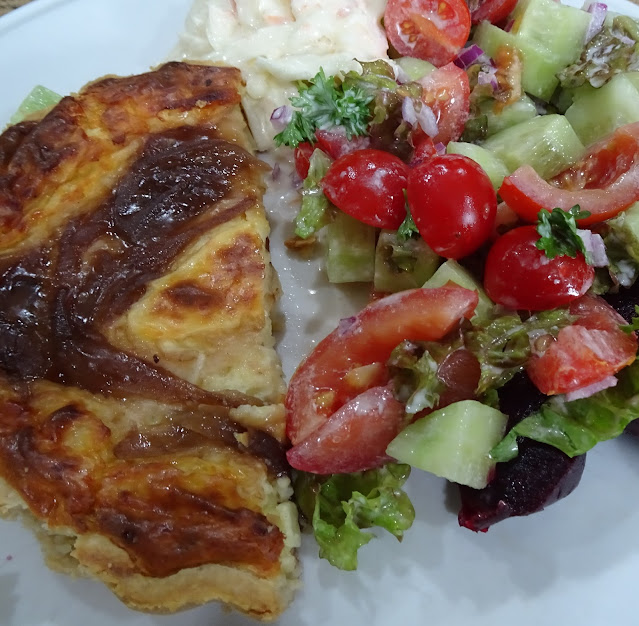 The plan for Wednesday was to crack on with some jobs around the garden as the forecast was for another dry day, apparently hitting the heady heights of 23°C. I did two loads of washing and pegged them out on the line before my Wii Fit workout. After breakfast, we sat in the sunshine drinking coffee with the lads slumped by our feet. 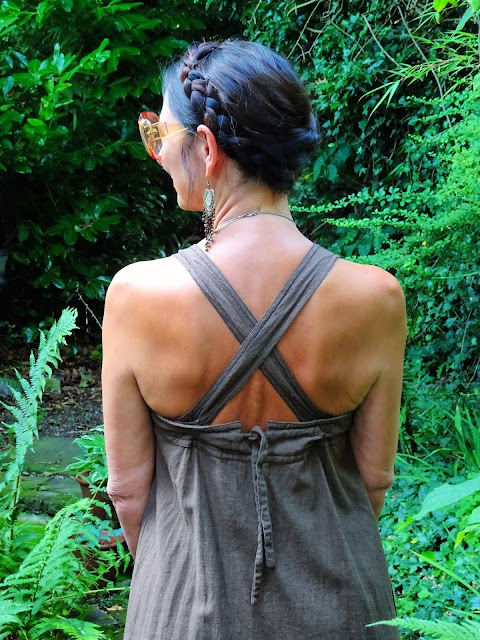 I walked around the corner to post my eBay parcels in the Priority Post Box, a concept introduced during lockdown. Anything that needs to be sent via prepaid postage (including Covid tests) is scanned by the Royal Mail on collection as opposed to having to visit the post office. The only trouble is that it's a wall-mounted postbox and you can only post very small packages through the slot - luckily yesterday's sales all fitted into A5 envelopes. 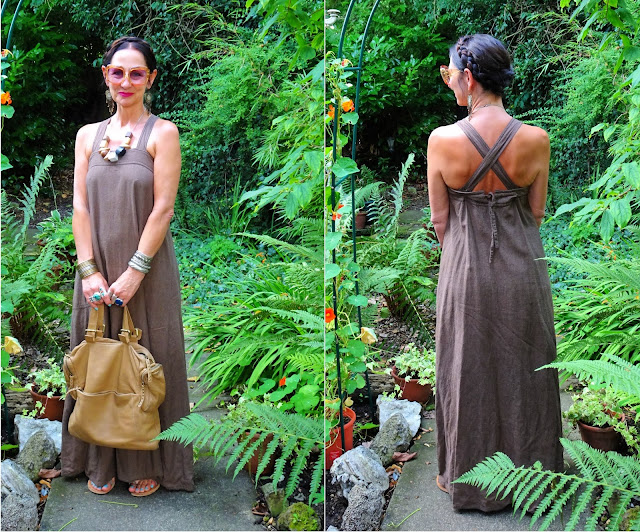 I've only worn this vintage India Imports of Rhode Island dress as a pinafore previously but today it was teamed with my new-to-me 50p beads and the £2 Gharani Strok leather slouch bag I bought from the charity shop on Sunday morning, no blouse required. 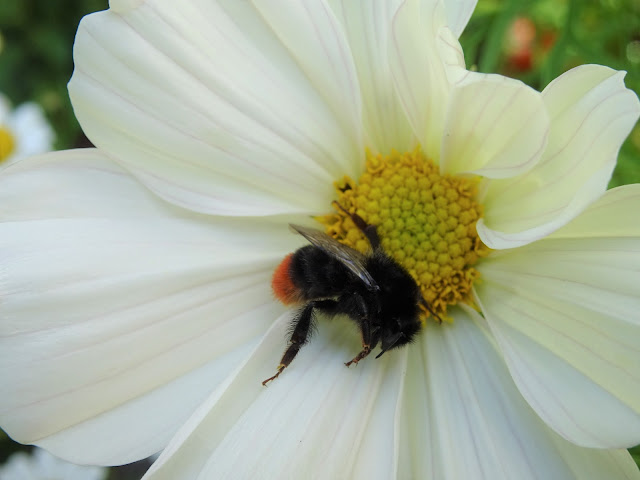 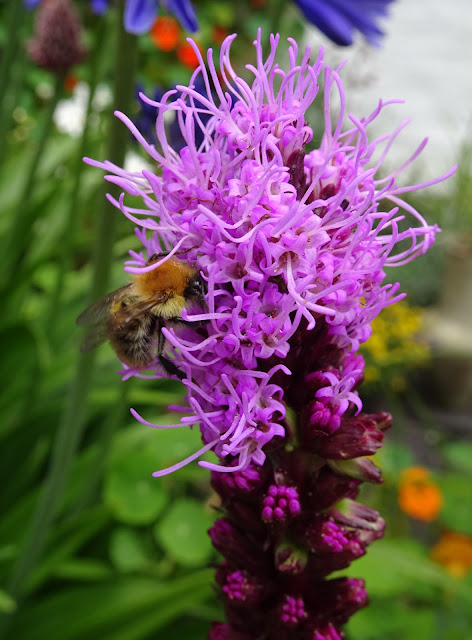 Back at home I hand-cut the grass in the meadow (avoiding the profusion of pollinators feasting on the wildflowers), swept the gravel and pruned the laurel bush. Meanwhile, Jon got to work on the outdoor electrics, installing a new fuse box. A torrential downpour had us grabbing the washing and scuttling back indoors although by the time we'd eaten our noodles the sun was shining again. While Jon got the festoon lights Storm Ellen had destroyed last August up and running again, I ironed the laundry, repaired a couple of the garments we'd bought yesterday and steamed a hat back into shape. 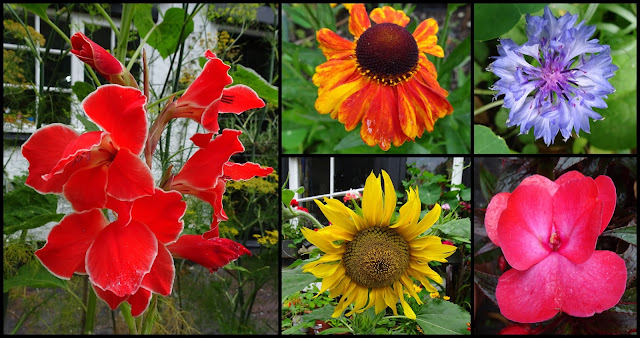 After bottling another jar of Poor Man's Capers (recipe HERE) I had a wander around the garden to check on everything. The veg crops are looking good (but not as pretty to photograph) with black, cherry and moneymaker tomatoes, patty pans, tomatillos, chillies, peppers, courgettes, red cabbage, cauliflower, two varieties of lettuce, Greek and broad beans, Shiraz peas, carrots, parsnips and sweetcorn all flourishing. 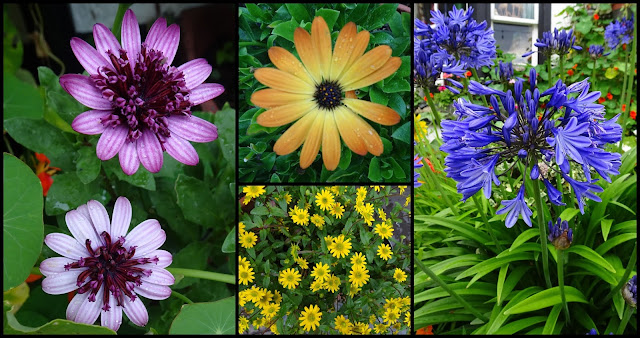 Considering I haven't fed any of my pot plants for ages, they're doing well.  Packwood's Phlox are surviving and red hot poker has grown a couple of spikes. I was curious as to what colour the hydrangea I'd moved in the Spring would be, it was previously blue and it still is. 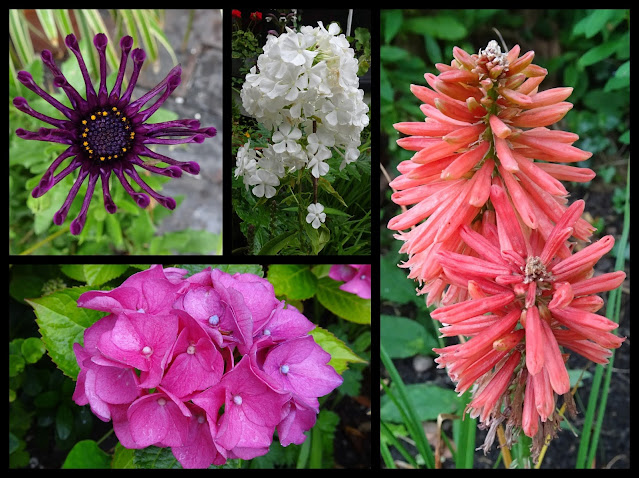 The Chocamocha cosmos smells so good that Jon and I keep running outside to sniff it. We planted it last Summer for some Autumn colour and were delighted that it survived several moves. 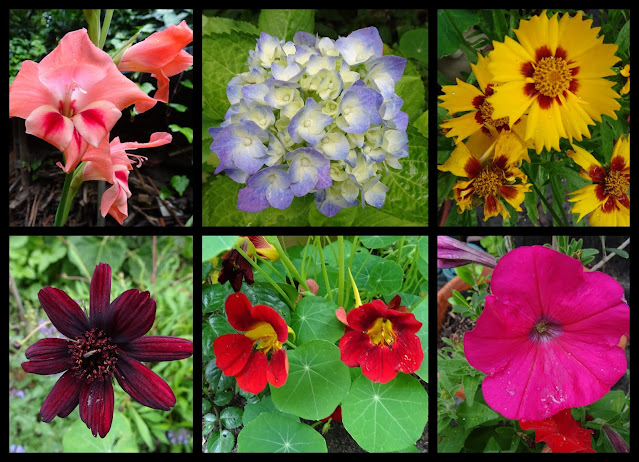 We never planted this magnificent Crocosmia Lucifer (below), it just appeared one Summer and expanded. The torrential rain for the last week or so has battered the stems so we've had to stake them. 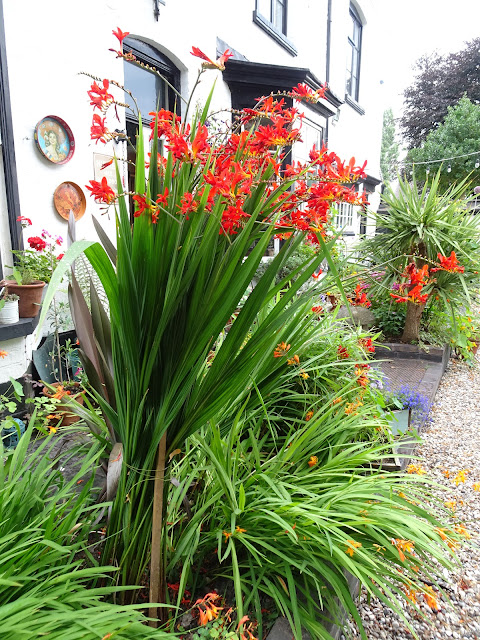 We found another Bear's Breeches (Acanthus Mollis) growing wild up by the pond so we transplanted it in the border next to the other one. Apparently, they can be thugs and take over, I can live with that! It seems to have survived the upheaval. 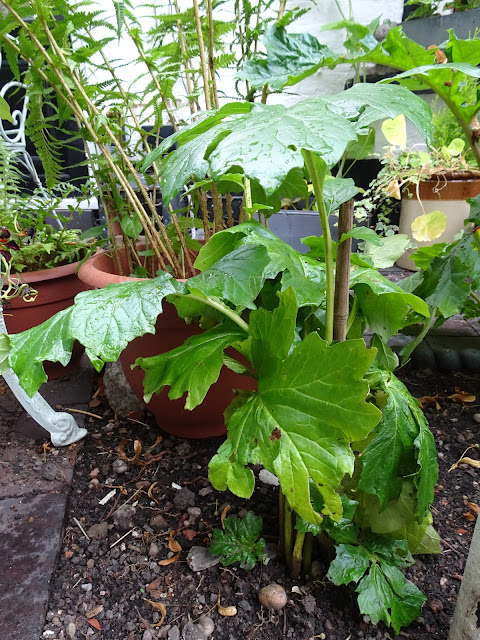 I'm off to wrap the birthday boy's presents before starting the celebrations a day early. Well, it is rum night!

Email ThisBlogThis!Share to TwitterShare to FacebookShare to Pinterest
Labels: Charity Shopping, Gardening, Jon, Out and About, Outfit