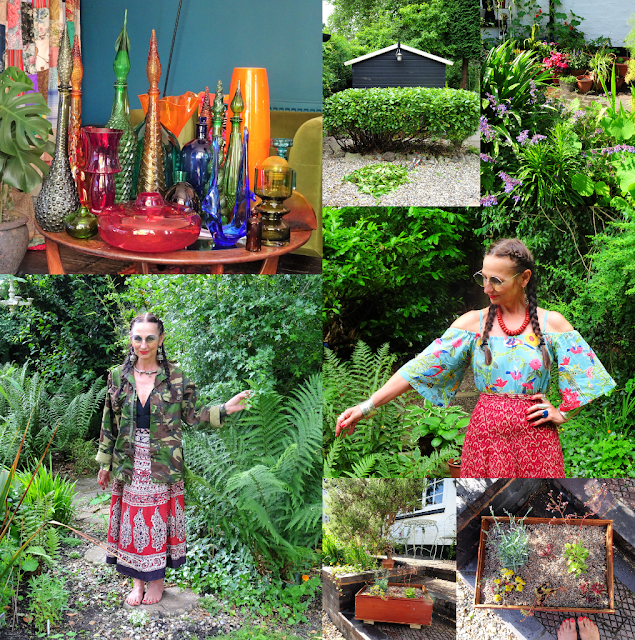 It felt more like March when I went for my early morning garden wander on Monday and was soon back indoors, clutching a handful of freshly picked strawberries. I caught up with Blogland and was halfway through my Wii Fit workout when Jon got up, an hour earlier than usual, so I had a mug of tea awaiting me when I'd finished. 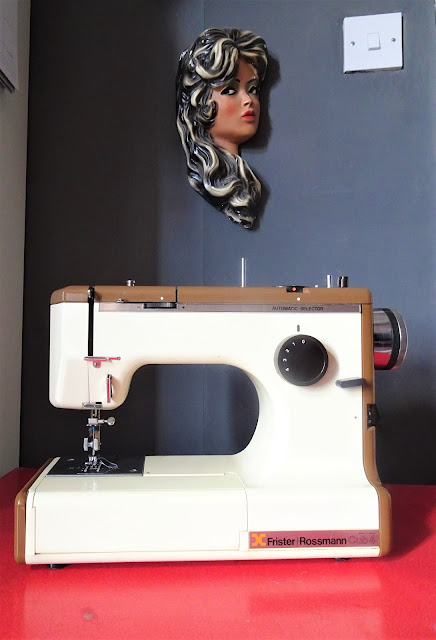 My sewing machine wasn't running very well so I took it apart and dusted it and got Jon to oil it. 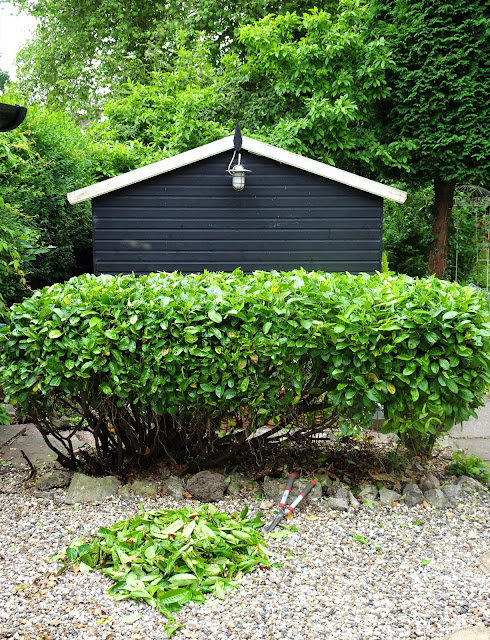 Jon left to do the supermarket shop and to call in on Tony and I got to work on giving the laurel a haircut. It had only been a month since I'd last done it but Friday's rain must have spurred it on. Richard delivered the mail, a parcel from &Keep with some plastic-free supplies bought with a £10 loyalty voucher they'd sent me. 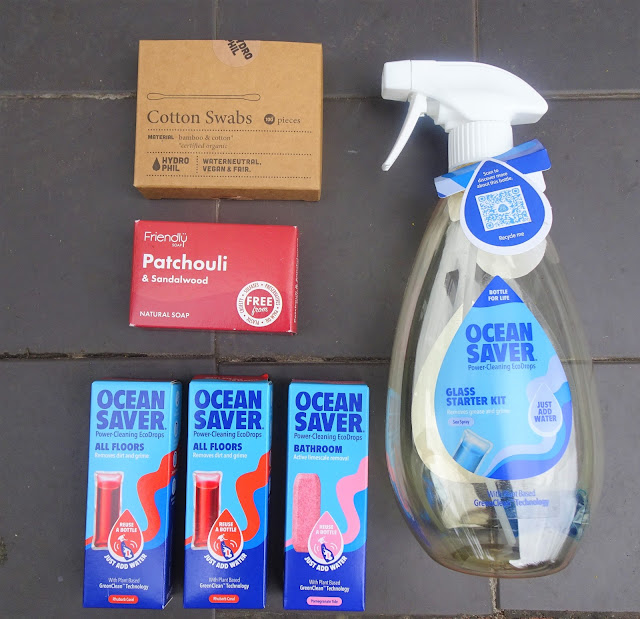 I'd just finished pulling up the last of the spent bluebells when Jon got back with the shopping and a gift from Tony, two large bottles of Greek beer. After a break for noodles, we loaded the van with two sacks of garden waste and drove to the tip to dispose of them. As always I was incredulous by what people were dumping. I watched in amazement as a couple chucked a car boot load of Xmas decorations away - while I loathe the things - surely they could have given them to a charity shop (ours are crying out for donations)? 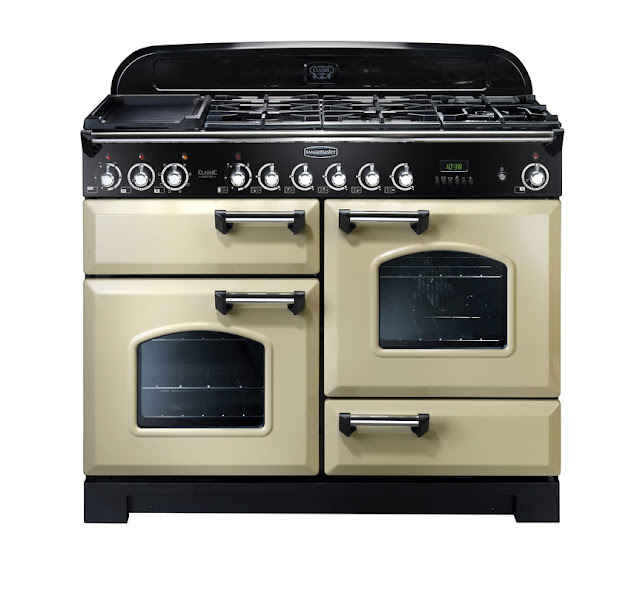 Back at home, I weeded a couple of borders leaving Jon to chat with our neighbours who are downsizing and moving over the border to rural Shropshire next month. He dashed back and asked me to come and look at their cooker as they had no room for it in their new kitchen & wondered if would be any good to us. Somewhat bemused, as I didn't think there was anything wrong with our existing cooker, I went over the road with him and saw that it was a duel fuel, British-made Rangemaster in cream - the exact model I'd always wanted but could never justify the expense! It's only 18 months old. I'm so excited I might even start cooking! 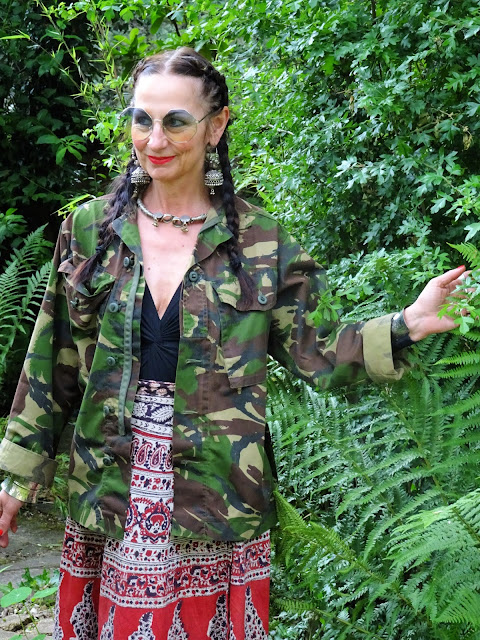 The temperature hovered at a very unseasonal 12°C all day so it was my trusty camo jacket and long sleeves. I kicked my Birkenstocks off to do some weeding. Apparently, our Winter solstice was warmer than the summer one...good old British weather!

We watched North Macedonia vs The Netherlands, shared a beer and had grilled Haloumi & veg for tea. Later we watched Belgium vs Finland and needed an early night after all the stress! 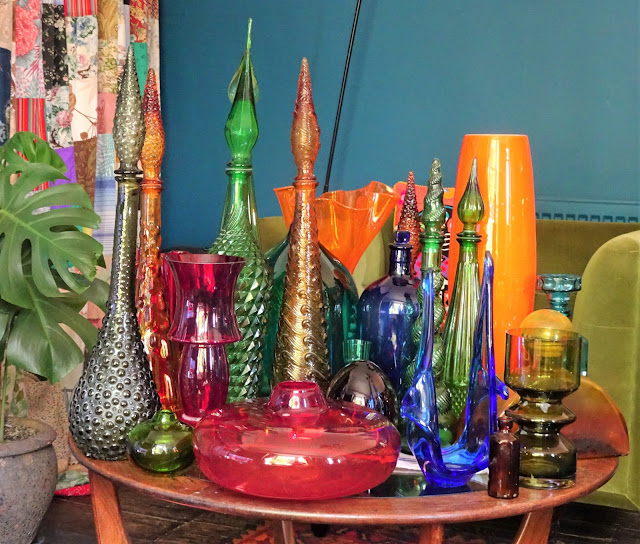 It was another chilly start to Tuesday. After I'd harvested some strawberries I did my Wii Fit workout, washed our vintage glass and gave the lounge a clean, ready for the England match later. After breakfast we drove to B&Q as the sink in the utility room had sprung a leak and Jon needed some plumbing gubbins. I left him to search for the bit he needed and wandered off to the gardening section. 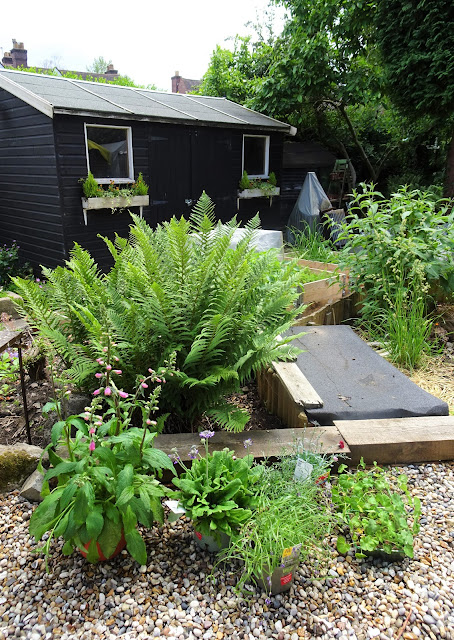 Needless to say, I ended up buying plants - all rescued from the clearance shelf. I found a foxglove (Digitalis Purpurea), a primula Noverna Deep Purple (very appropriate for a Black Country garden - the home of heavy metal), two trays of geraniums, a Hidcote Lavender, a Rhodanthemum Marrakech (Moroccan Daisy) and a Dianthus Fire Star. I gave them a thorough soaking as soon as I got home. 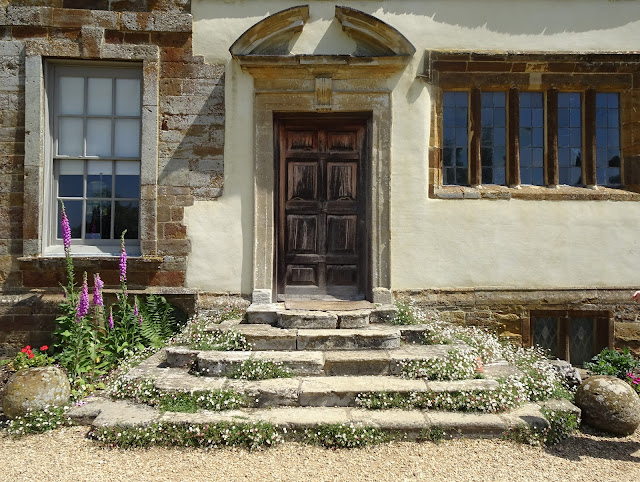 Back at home, there was another parcel awaiting, a pack of 5 Mexican Fleabane bare-root plants, bought from a nursery on eBay after seeing them planted on the steps of Canons Ashby last week.

I thought I'd give the £1 Indian cotton top I found on Thursday's charity shopping trip a go (blame Sheila, she made me do it!). The straps need shortening as they won't stay on my shoulders - possibly the reason it ended up donated - but an easy enough thing to rectify. I've no idea where it originally came from, it's well-made with French seams & a decent pattern alignment but I don't recognise this little logo. 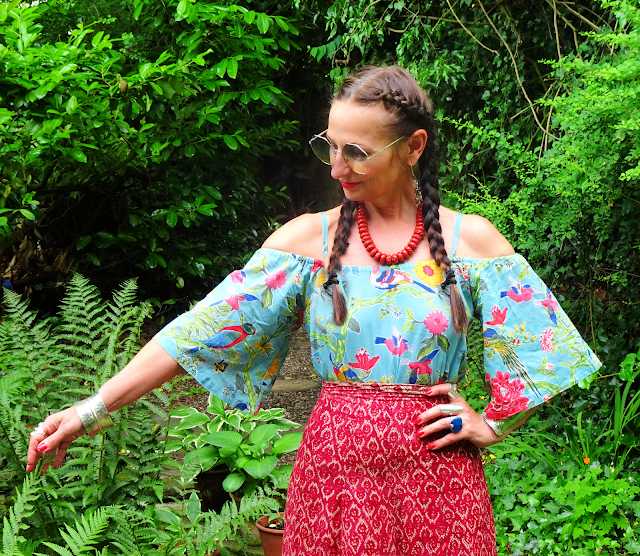 After our noodles, I left Jon swearing at repairing the leaky sink, got changed into my gardening gear and planted the morning's finds. The lavender went next to the gazebo, the primula in the wilderness, the Moroccan daisy in the patio bed and the foxglove in amongst the wildflower seeds we found hanging from a tree at Attingham. 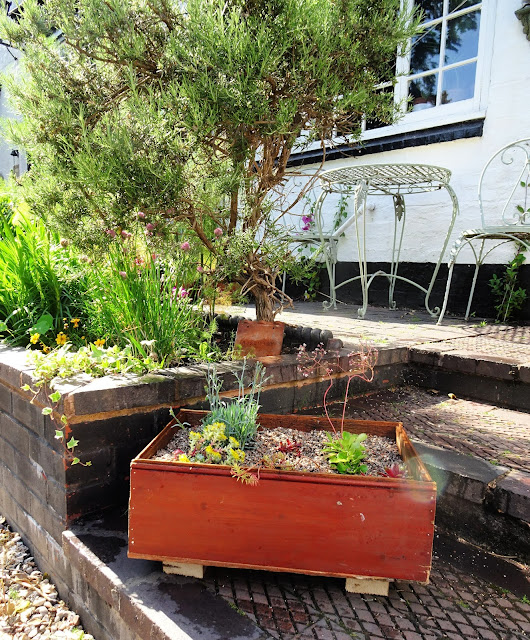 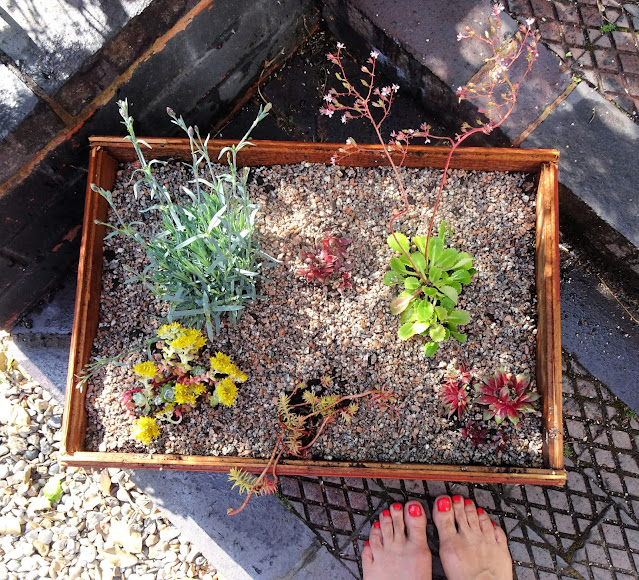 I'd just started making another wooden planter when Jon came out bearing posh coffees which we drank on the lawn before he took over. I planted my newly acquired geraniums in terracotta pots and dotted more in the borders. Once the planter was finished I planted it out with the new Dianthus along with some London Pride, houseleeks and a succulent salvaged from elsewhere in the garden whilst Jon planted the Mexican fleabane. 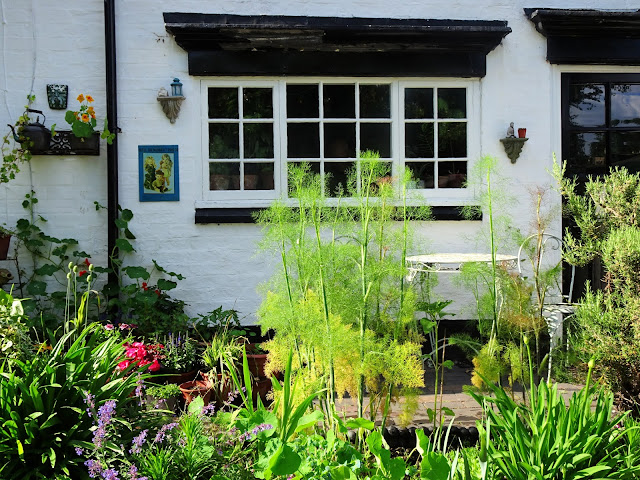 Now that Severn Trent have filled in the holes in the road from their pipework replacement and Gilbert's timing is fixed, we're taking him on a National Trust adventure in the morning, so Jon gave him a whizz around the block just to double-check he was running smoothly. He was! 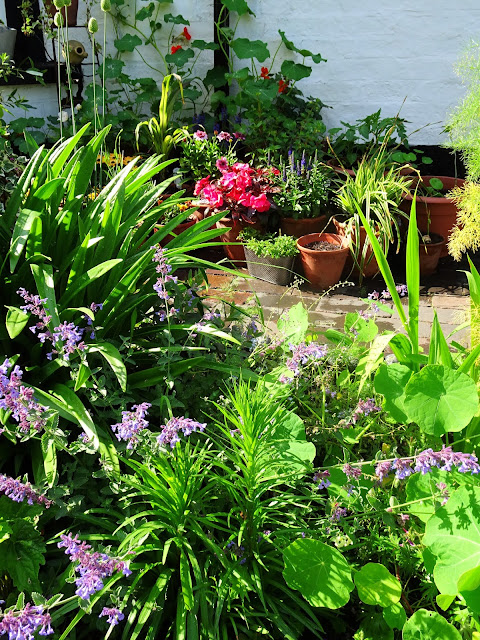 Leaving me on watering duty, something that is taking longer and longer each week and gives me so much pleasure. 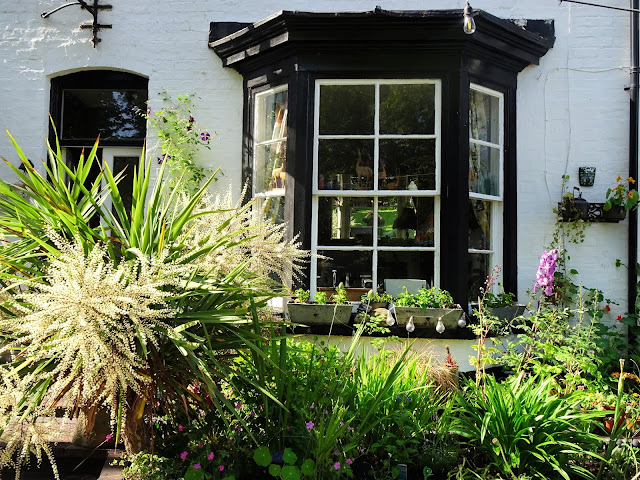 The bulbs I planted in the Spring are shooting up and the nasturtiums & nepeta are going crazy, I don't think it'll be long before my beloved Aganpanthus bloom and I can dream I'm back in Greece. 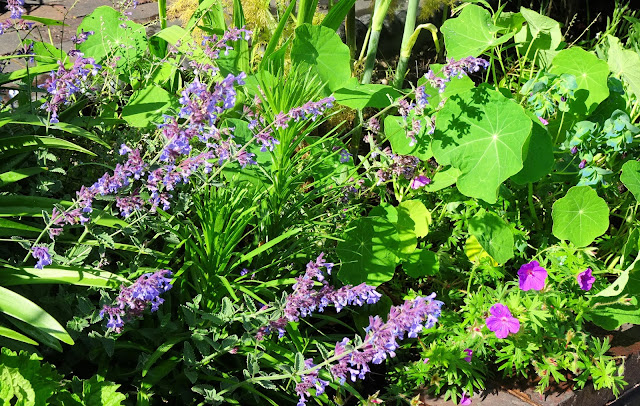 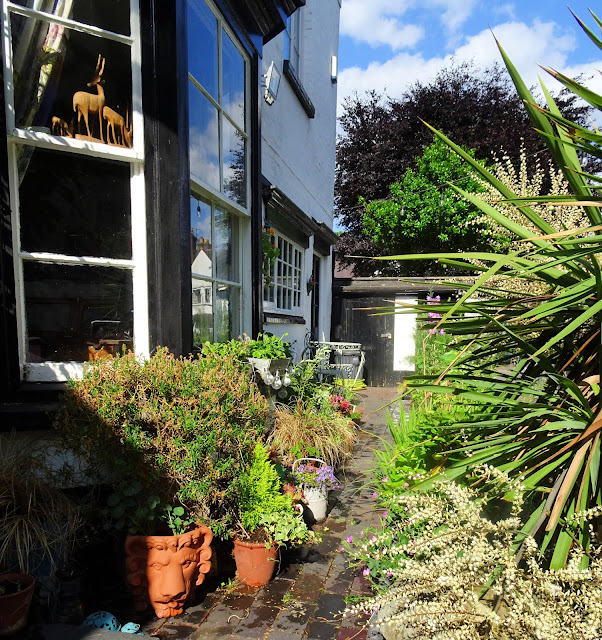 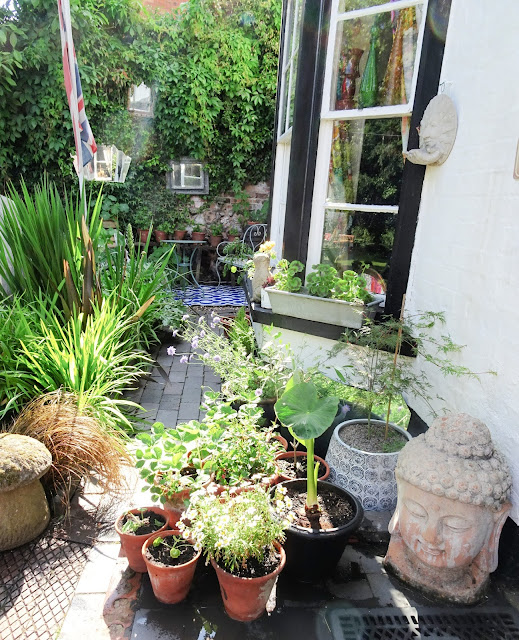 Tea was salad and garlic bread with homegrown lettuce, mizuna leaves, rocket, summer savoury and Shiraz peas fresh from the garden. I'm off to have a shower, change into my lucky red bikini, crack open a beer and watch the build-up for the match. 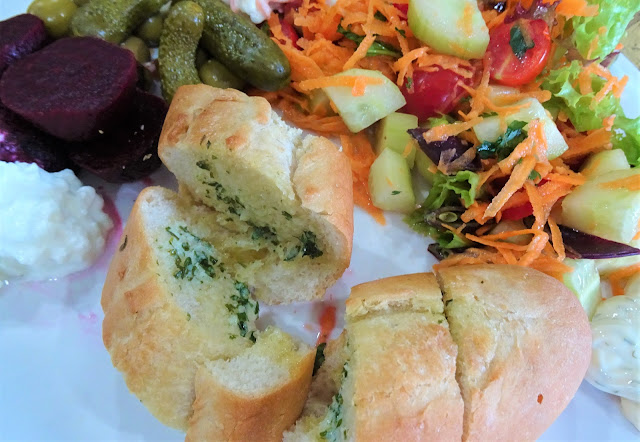 Email ThisBlogThis!Share to TwitterShare to FacebookShare to Pinterest
Labels: Block Print, ebay, Gardening, Our House, Out and About, Outfit