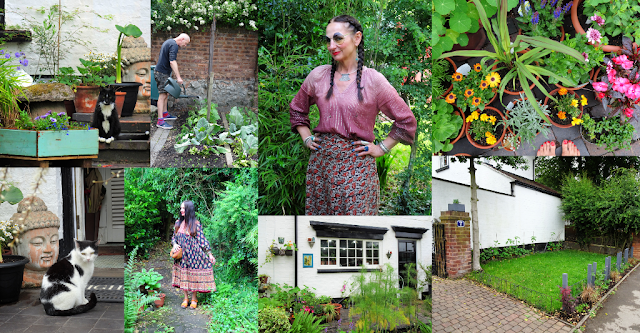 Jon made tea on Saturday morning, brought it back to bed where we lay and read until 8am when the lads demanded our attention. Leaving Jon to sort out breakfast, I stripped & changed the bed sheet & pillowcases, loaded the washing machine and pegged the laundry out on the line noticing that the clematis beside the front door had burst into flower overnight, 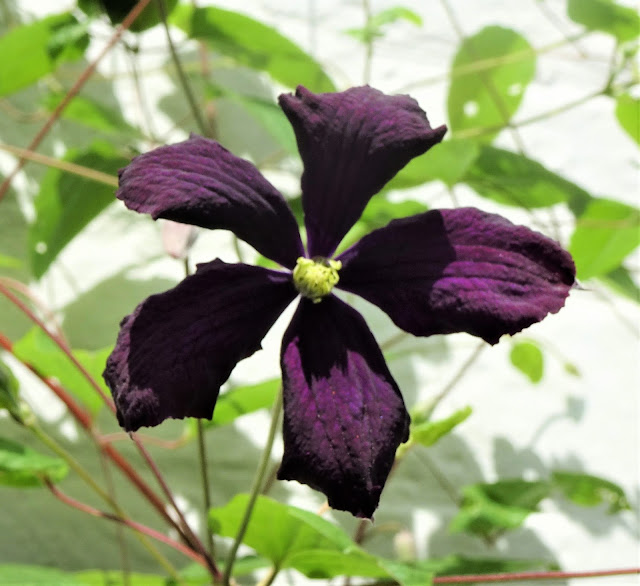 As had our second Philadelphus. 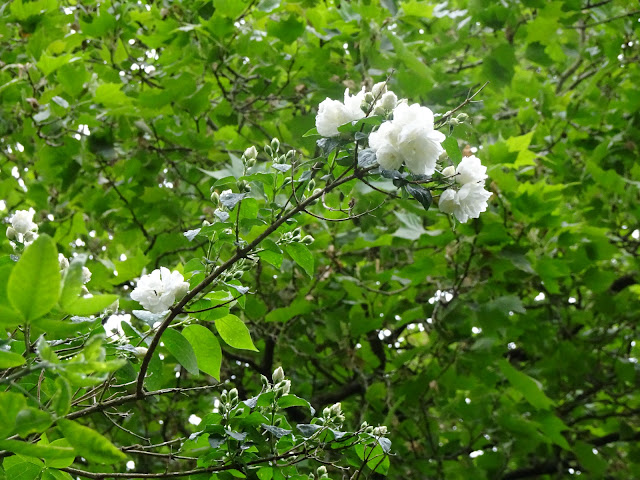 The sky was grey but we'd been promised a dry day. After a sausage sandwich, we scribbled a gardening to-do list and got stuck in. I'd slept in my French plaits and they hadn't budged, no wonder it's the hairstyle of choice for so many festival going girls & backpackers, no faffing about with hair when there are better things to do.

After he'd staked the honeysuckle and lavatera and nailed a vintage enamel sign to the wall, Jon weeded the veg patch, sowed some of the nigella seeds Kezzie had sent and planted out lettuce, curled parsely and French dwarf beans. 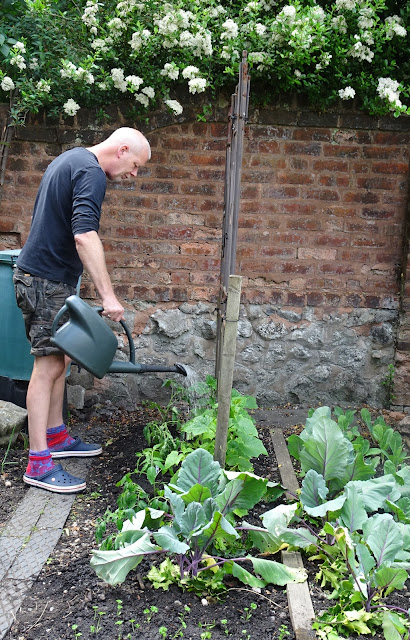 Watering the red cabbage, gherkins, cucumbers, cauliflowers and a few of the tomatoes. 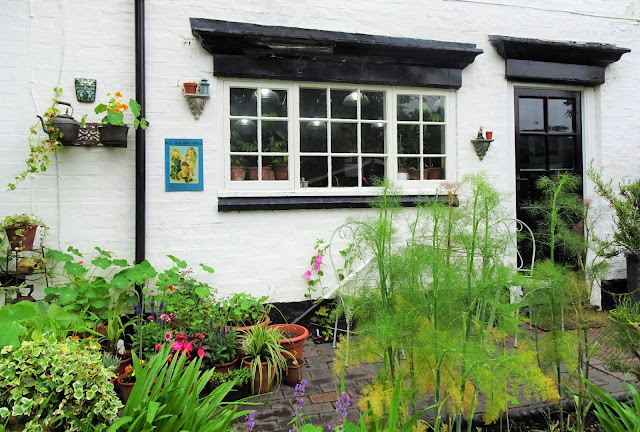 I trimmed the front lawn with shears, mindful of my wildflowers, and dug up more Fox & Cubs, transplanting them into the turf. I pulled the leaves from the Oriental poppies to give the other plants in the bed a bit more room and did my thrice-weekly bindweed and bramble check. 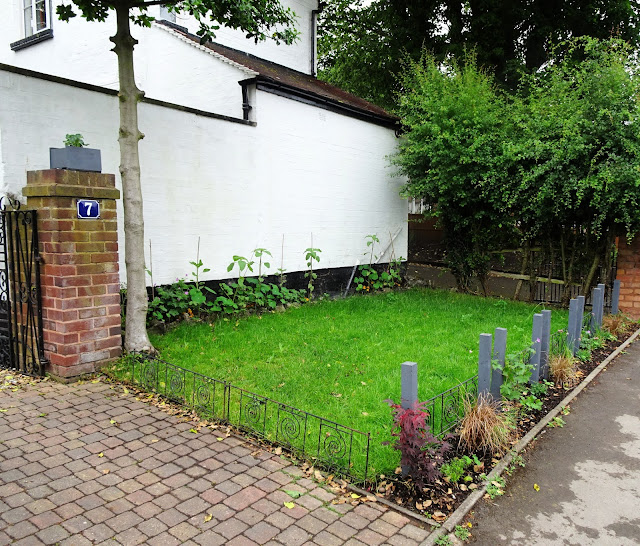 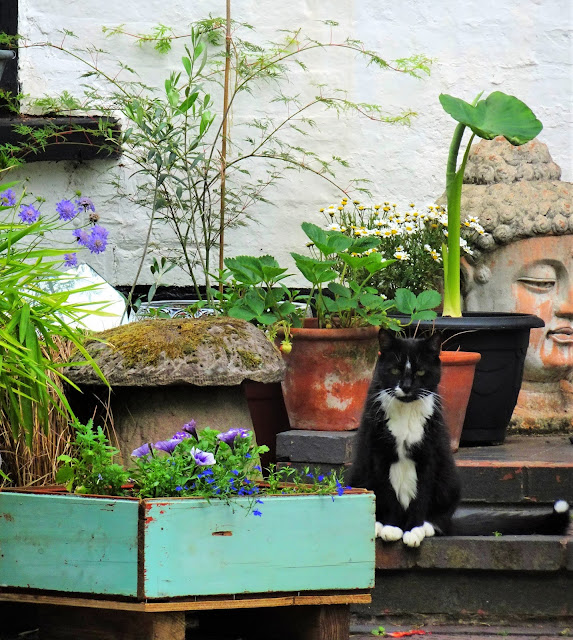 While Jon tinkered with Gilbert's timing  I stripped down to my bikini, lay on the lawn with the radio tuned to Hungary vs France and finished The Good Liar. Wow! What an excellent read, I had no idea that was coming. 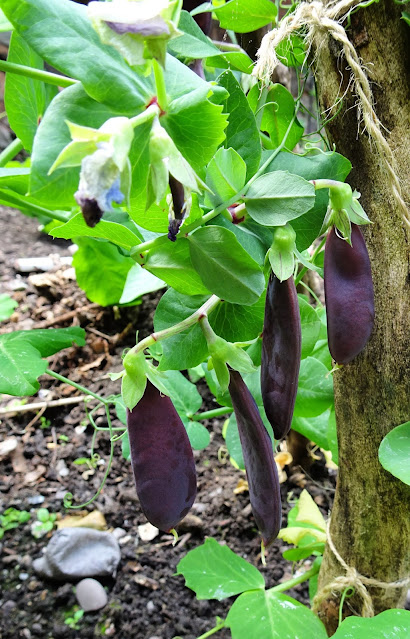 We had a beer in the late afternoon sunshine before watering the garden & sampling some of the delicious Shiraz peas plucked straight from the vine. Tea was homemade curry, paneer & mushroom for me & chicken for Jon, eaten whilst watching Germany vs Portugal - what a match! Later we caught up with the previous evening's Gardeners World before watching Spain vs Poland (another thriller), accompanied by rum. 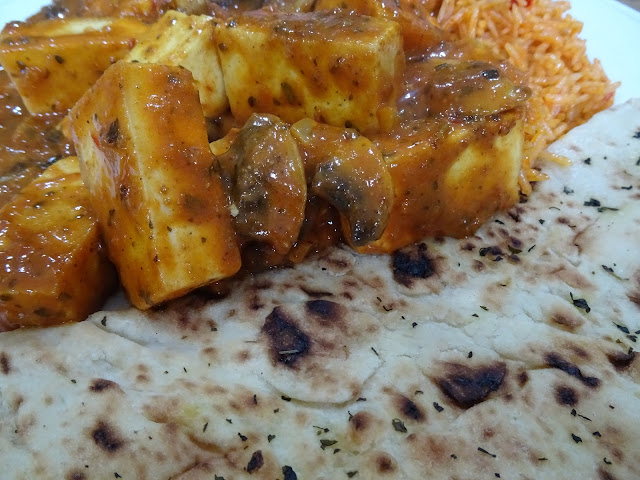 It had rained heavily throughout the night and my Sunday morning garden inspection revealed several casualties, including my Dusky Maiden delphinium, which I staked up before taking mugs of tea back to bed and reading till just gone 8am. 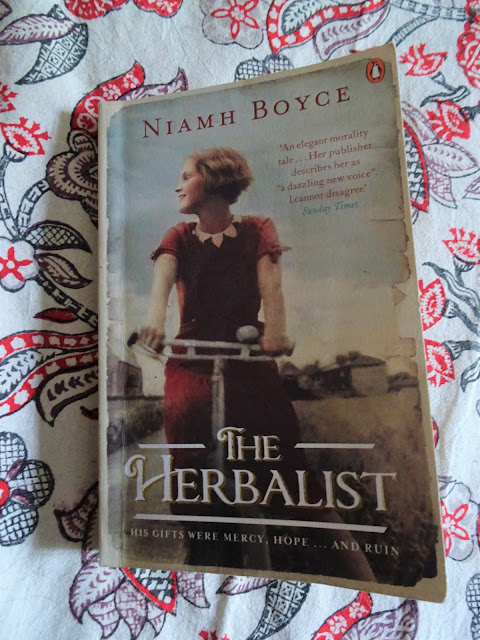 And a wonderfully absorbing read it is. (Lynn, I'll be sending it your way when I've finished). 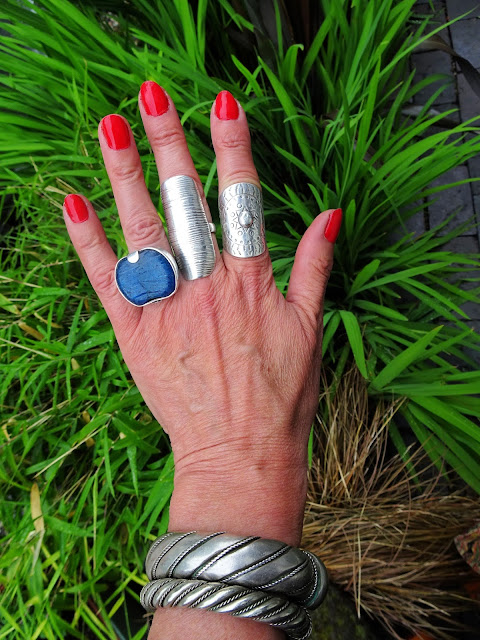 We had eggs on toast for breakfast, I painted my nails with Barry M's Passionfruit and we watched The Andrew Marr Show. 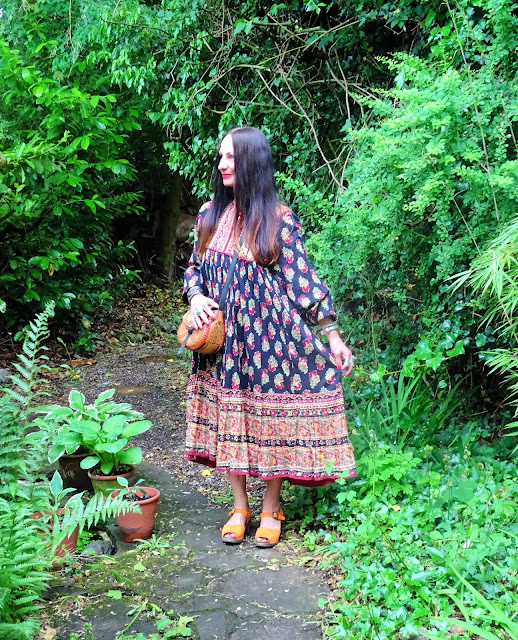 At a feeble 12°C, it was back to a long-sleeved dress (a 1970s Phool midi bought from Second to None in 2018) along with some orange nubuck Lottas (website flash sale), a vintage tooled leather bag and a me-made mask). I'd washed my hair the previous evening so the plaits were gone. 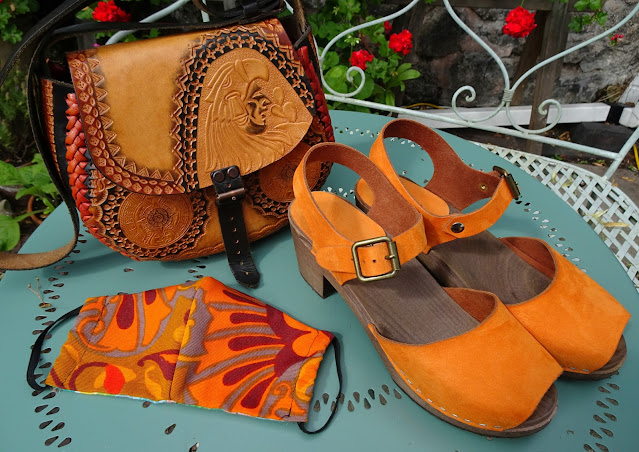 Jon'll be in shorts until November. The brown corduroy chores jacket was a charity shop find last week but he'd chucked it in the washing machine before I had a chance to photograph it. He's not as grumpy as he looks...honest! 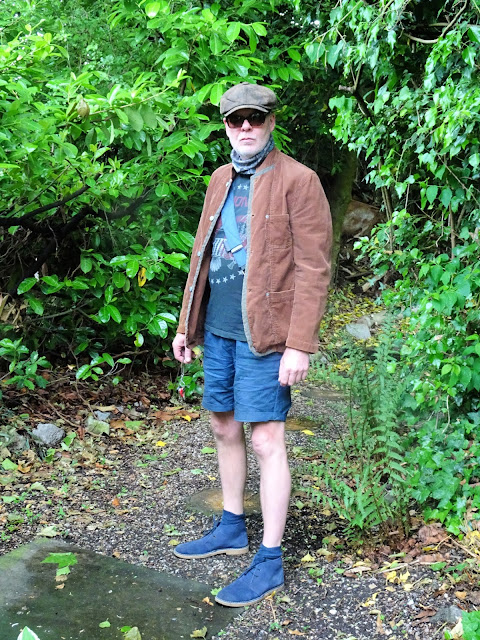 As is now our new normal, we popped down to the clearance charity shop at the top of town, donating a maxi dress from festival stock, some costume jewellery surplus to requirements, a couple of paperbacks, a Kindle and a couple of tablets (all old tech but working and hopefully of some use). 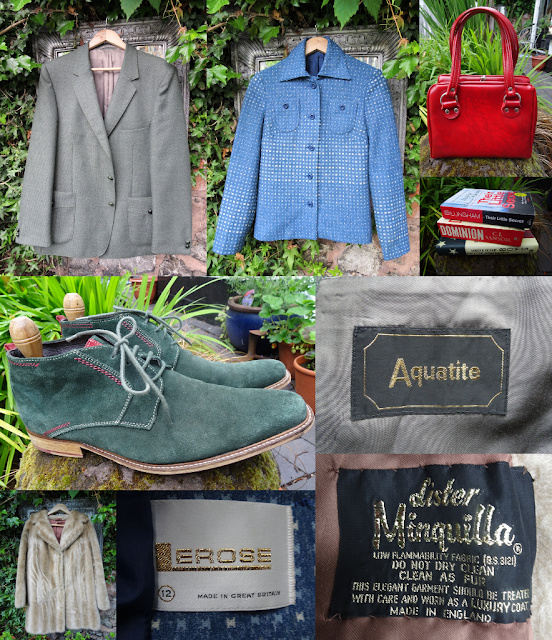 We came back with a vintage Lister Minquella fake fur coat; a 1970s Lerose Mod jacket; a 1960s vinyl handbag; a 1970s Norfolk jacket by Aquatite; three books and a gorgeous pair of unworn Jones the Bootmaker green suede boots, which Jon's already put in his wardrobe. 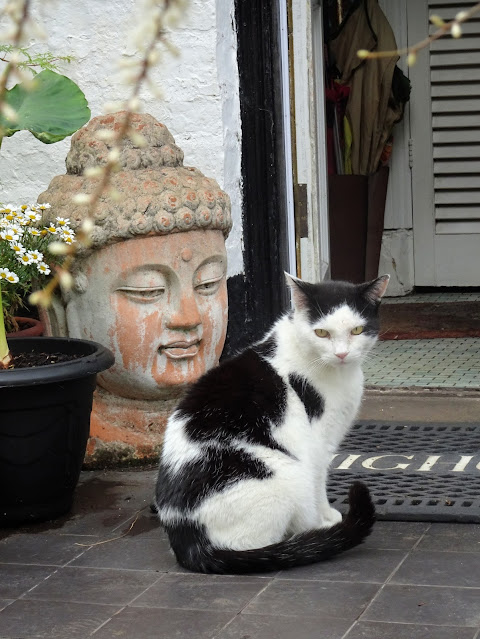 After a bowl of noodles, Jon took Gilbert out for a test run and was happy with his performance after Saturday's tinkering. Afterwards, we got stuck into another woodworking project. 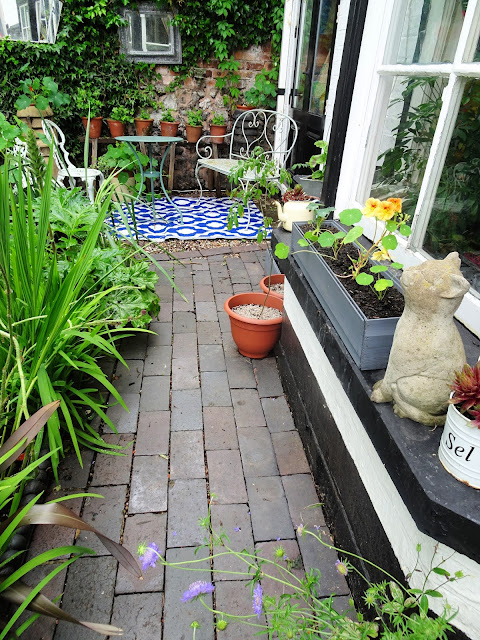 As a self-confessed maximalist, an empty wall like the one above is an affront. 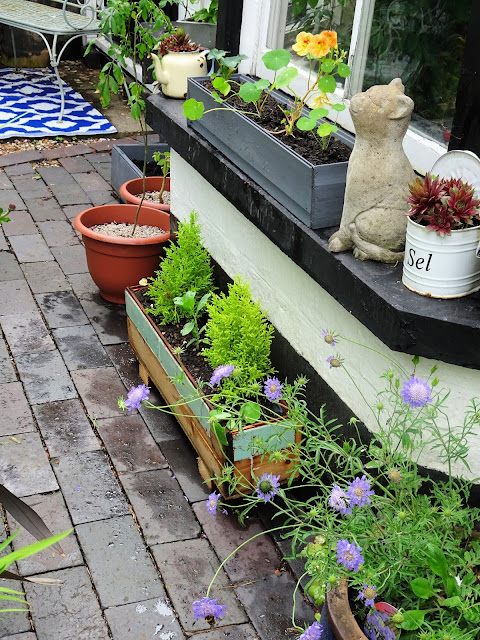 Thankfully we have a never-ending pile of interesting bits of wood so a couple of hours later the space was filled with a Victorian skirting board planter, lined with an old tarpaulin and filled with dwarf Goldcrests, nasturtiums and a honeywort transplanted from elsewhere in the garden. Even the compost is homemade! 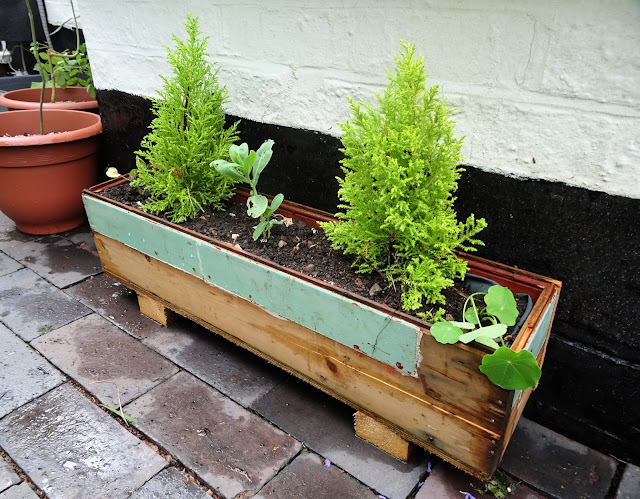 Leaving Jon positioning his railway sleepers (and replacing the step he cracked in two in the process), I did some deadheading and staked some of the nasturtiums which have grown at an alarming rate after last night's rain. 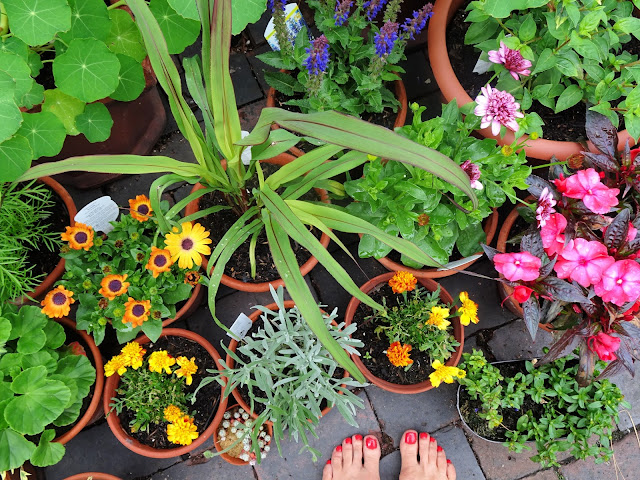 Right now there's pizza in the oven and Wales Vs Italy on the TV. Come on, Wales!

Email ThisBlogThis!Share to TwitterShare to FacebookShare to Pinterest
Labels: Block Print, Charity Shopping, Gardening, Jon, Out and About, Outfit, Pets