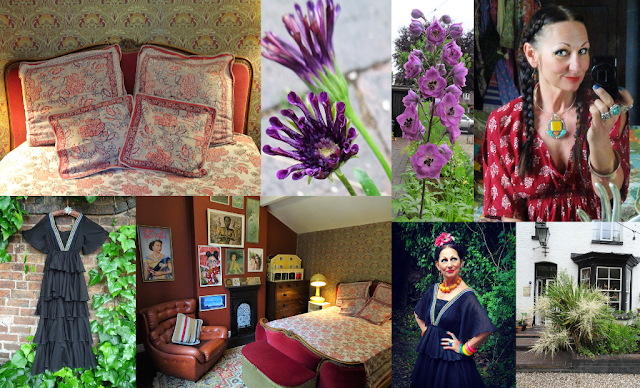 It had rained overnight and Thursday morning was grey, chilly and overcast. I picked a few strawberries on my meanderings around the garden, checked into my Wii Fit and caught up with Blogland. After breakfast, I swept the rugs in the middle room and Jon set off for the dentist returning 40 minutes later with a temporary filling and arrangements in place to have an implant fitted. 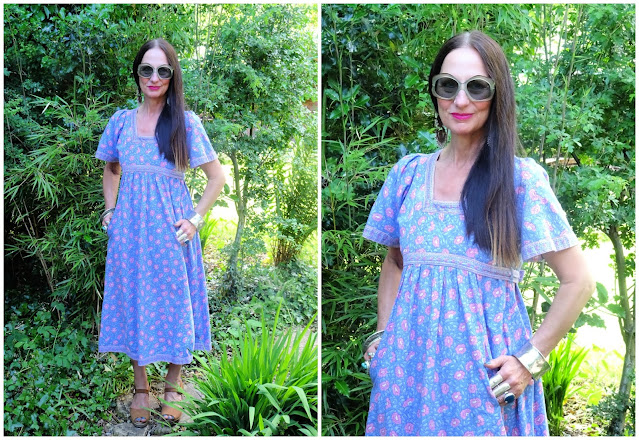 By 10am the sun had broken through the clouds. I wore a 1970s block printed cotton midi dress by Ritu Kumar for Monsoon, some vintage deadstock sunnies and my Lotta from Stockholm clogs.

We drove to our favourite Black Country town for a rummage around the chazzas. It was warm, it was market day and it was as busy as it used to be in the olden days (before Covid). We had to queue outside several of the chazzas. We'd managed to find the last parking space in the free car park and spotted this rather wonderful Art Deco signage on a substation tucked up the corner (MEC - Midlands Electricity Company). 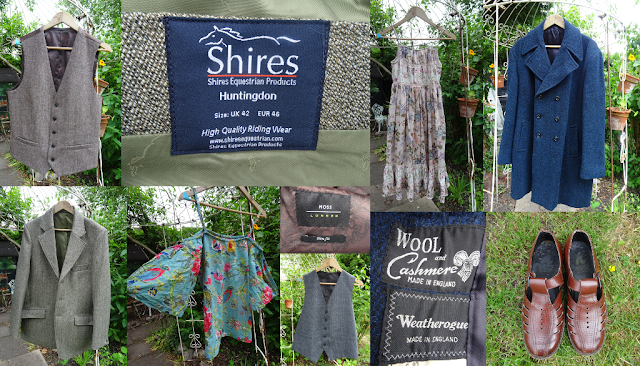 What did we find? For the stockroom - a couple of waistcoats (one vintage 1970s, the other from pricy British gents outfitters, Moss Bros); a rather snazzy 1960s wool and cashmere gents overcoat; a 1980s Indian cotton sundress; some 1970s K leather sandals (made in Czechoslovakia); a gents tweed equestrian jacket (with a highly cut back vent for sitting on a horse) and a pretty block-printed Indian cotton off-the-shoulder top which I haven't tried on and am wondering whether I should. 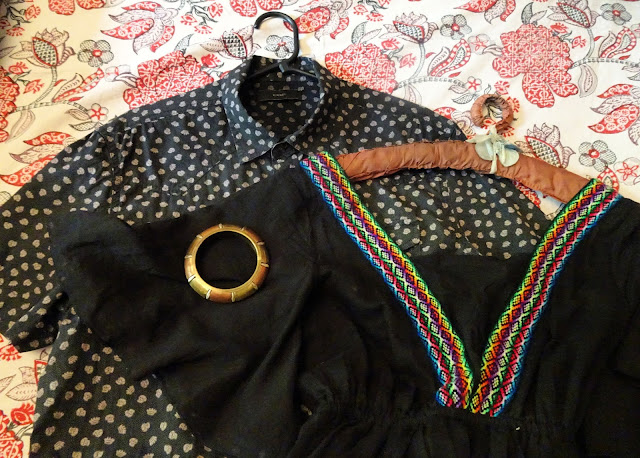 Naturally, there were a few bits for us. Jon bought a Diesel western shirt for £7 (currently retailing online at £125) and I snaffled this vintage mixed metal bangle for 50p. Nestling on the rail amongst the clapped-out synthetics and bland high street cast-offs the braiding on this dress caught my eye. I pulled it out and discovered this....be still my beating heart! 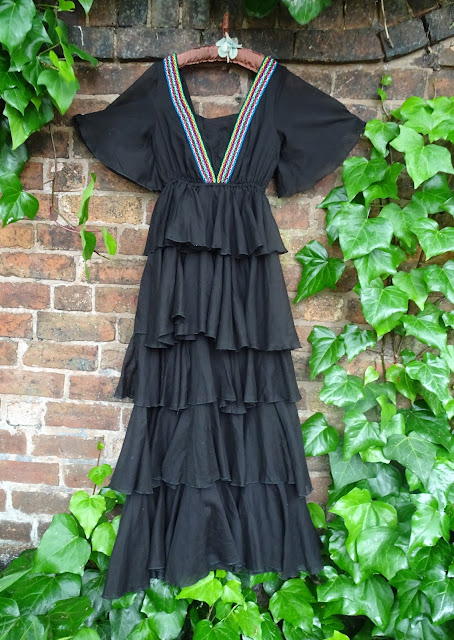 It still had the remains of the original store label attached. Back at home I did some research and discovered that Pitusa - meaning funny little girl in Spanish - was established in 2010, uses the finest Pima cotton in their garments and that the colourful Inca trim is the label's signature feature. Pitusa employs women-owned ateliers in Peru, India and Bali and all their garments are produced under ethical & fair-trade working conditions. Their flagship store is in Miami - a long way from the Black Country. This dress retails at £154.99 although there's one currently on eBay for £95. I think £3 was a bit of a bargain! 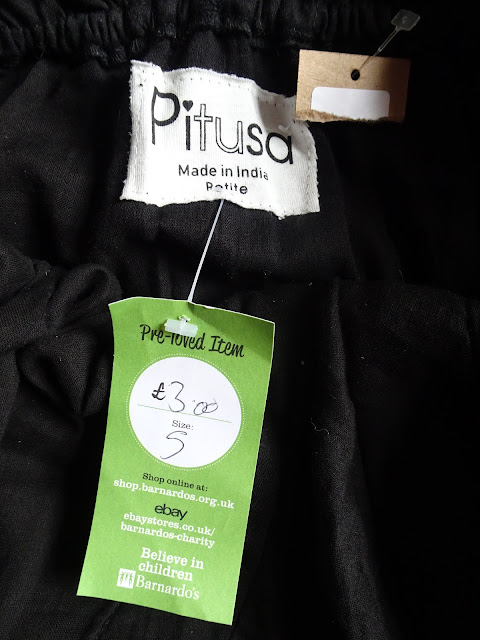 Back at home I chucked our washable purchases in the machine & pegged them out on the line 15 minutes later. We had noodles, changed into our gardening gear and pottered around the garden with the radio tuned to North Macedonia Vs Ukraine. 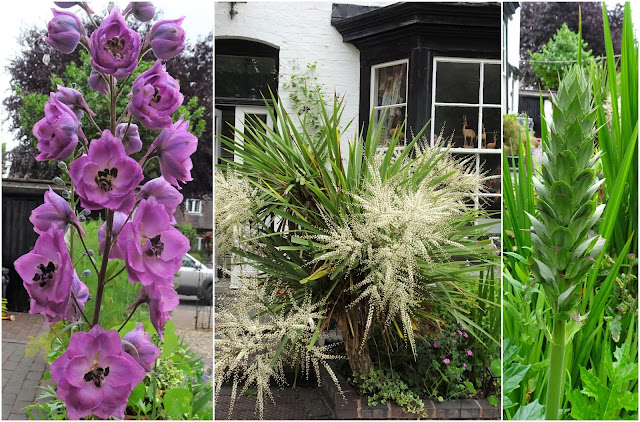 Our Dusky Maidens delphinium has finally bloomed and is just as beautiful as it was last year, isn't it a gorgeous colour? The Yukka continues to delight us with its flowers and intoxicate us with the scent. I'm anxiously awaiting this flower spike on the bear's britches. 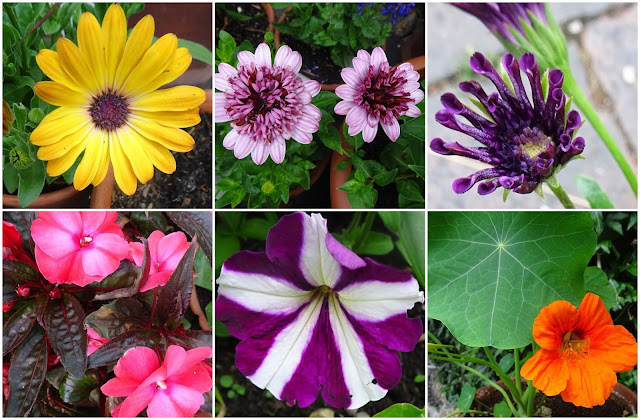 Jon planted some more exotic bulbs, I tidied up the border outside the house, stripping the leaves from the now-defunct Oriental poppies (they didn't last long!) thinning out the feral fennel and pulling up more bastard bamboo.

After a coffee break we planted some grasses alongside the ferns in the bed outside the gates and watered the pots, the ground had got a good soaking after the overnight rain so we had a day off. We retreated back indoors for Denmark vs Belgium and had pizza for tea. Late, after catching up with the rest of the series finale of Scotland's Home of the Year, we watched the Netherlands play (and beat) Austria. 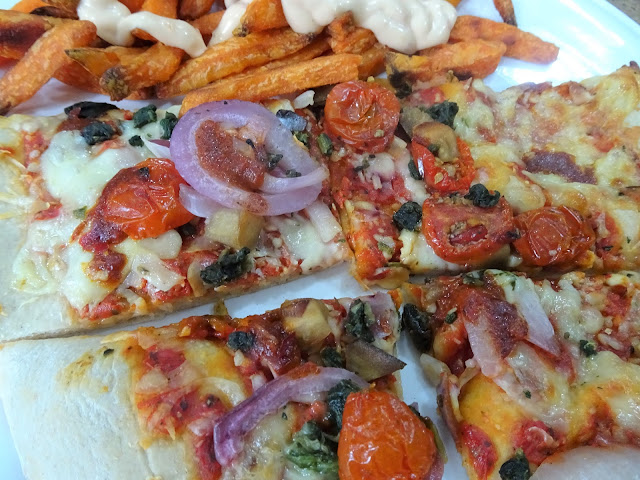 On Friday morning I managed to book the last two slots for next week's National Trust expedition. My replacement Wii Fit disc had arrived the previous day, and I could have a proper workout session. We were due our annual boiler service and luckily were first on the list with the mechanic arriving at just after 7.30am, I left Jon to deal with him whilst I wrapped my eBay sales. 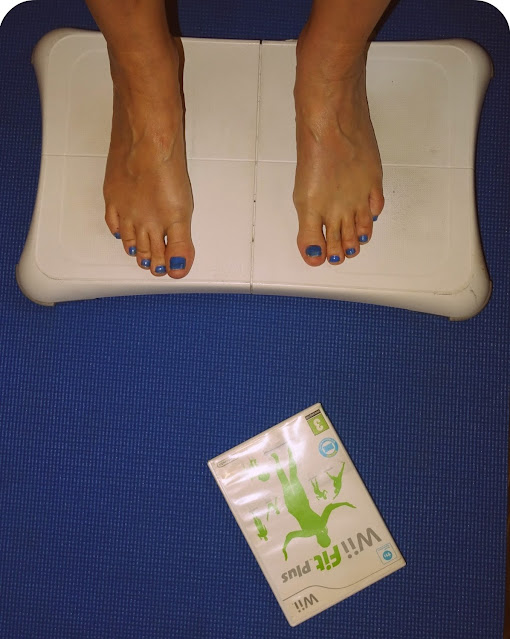 After breakfast and, like most of the population of England and Scotland, I was too giddy with excitement over the match to concentrate on anything sensible so dressed up in yesterday's top chazza find and flounced around the garden in the pouring rain. Did I mention that we're set to have a month's average rainfall in the next 24 hours? 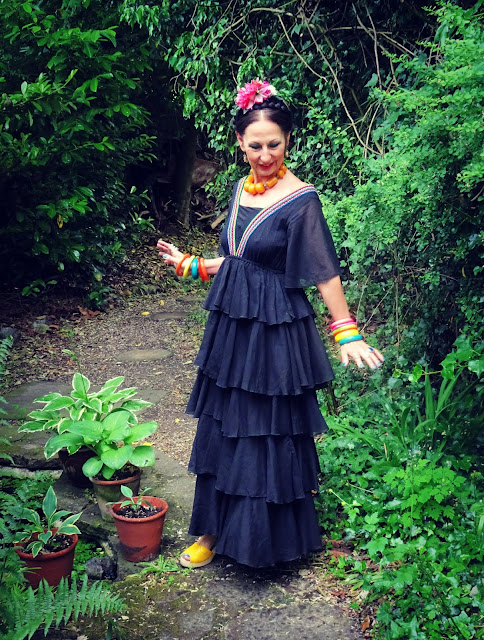 On Pitusa's website, they describe their clothes being high quality, comfortable beachwear but when I spotted it in Barnardos my first thought was Frida Kahlo so I plaited my hair, added a floral headband, a stack of plastic bangles, my yellow Lottas, my beloved copal beads and some Frida earrings from my collection. 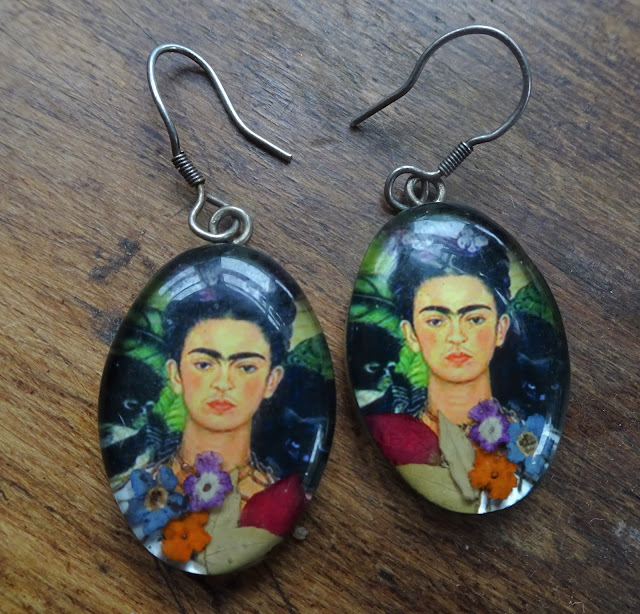 These are from our dear friends and festival neighbours, Shilpa Silver who trade as Silver Bubble. Buy them HERE (or put them on your birthday list!) 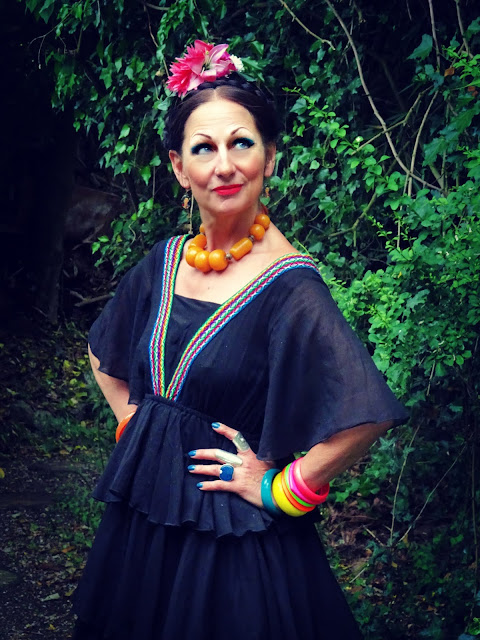 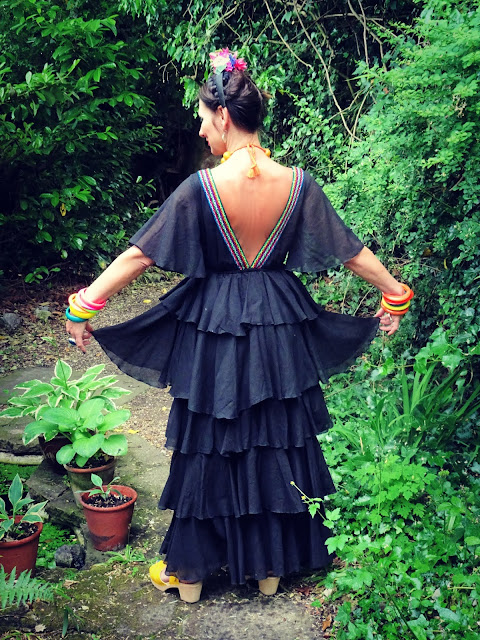 I might try this dress with the huge straw hat I wore to Chastleton House along with the recently chazza-shopped Pierre Cardin snake sandals & pom-pom trimmed beach bag when the sun makes a comeback.

Leaving Jon to the post office run and a supermarket top-up shop I changed into something more sensible and cleaned the bedroom.

I'm loving our Anokhi bedcover and matching pillowcase/cushion cover set - the seller bought them on her Indian adventures in the noughties and never got around to using them - it's easy to get carried away shopping in Anokhi! We've dispensed with the duvet and have just been sleeping beneath its crisp cotton loveliness for the last couple of nights. With the rain still lashing it down, it was an afternoon spent watching Sweden Vs Slovakia followed by the last instalment of The Great Photography Challenge. In her recent blog post, Claire had talked about perfecting her French plaits (aka boxer braids or Dutch braids) HERE.  Bizarrely, although I often do them for friends and customers at festivals, I've never worn them myself so, inspired by her, I had a bash. I'm now wondering why it's taken me 54 years to get round to it! 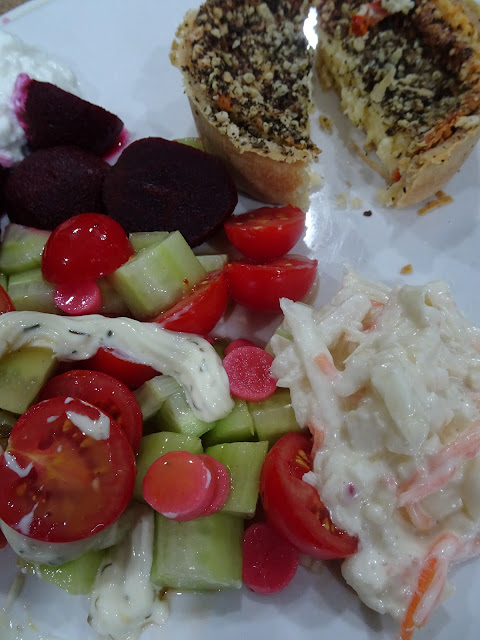 Tea was salad and quiche with a beer whilst watching Croatia vs the Czech Republic. We've already got the jitters about tonight's game but I've got my lucky red bikini on and the rum is ready & waiting.

Email ThisBlogThis!Share to TwitterShare to FacebookShare to Pinterest
Labels: Block Print, Charity Shopping, Gardening, Hair, Our House, Out and About