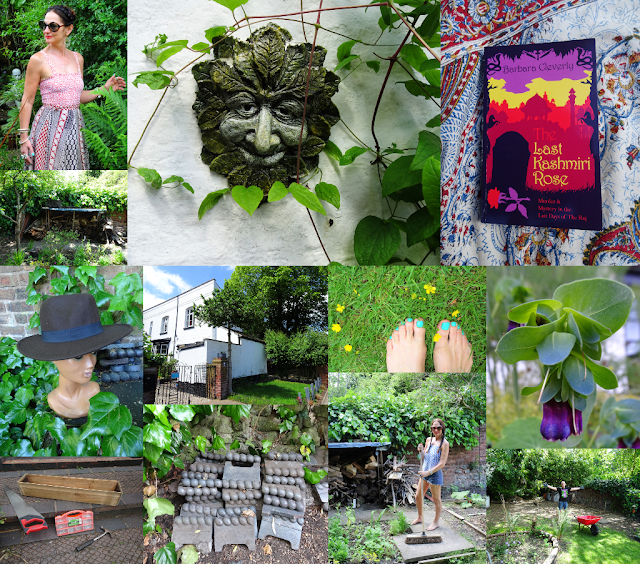 As soon as I was up on Friday morning I booked next week's National Trust visit. After my last Wii Fit workout of the week, I wrapped my eBay sales and cleaned the lounge, mopping the floorboards, dusting the surfaces, sweeping the rugs and repotting a couple of houseplants. 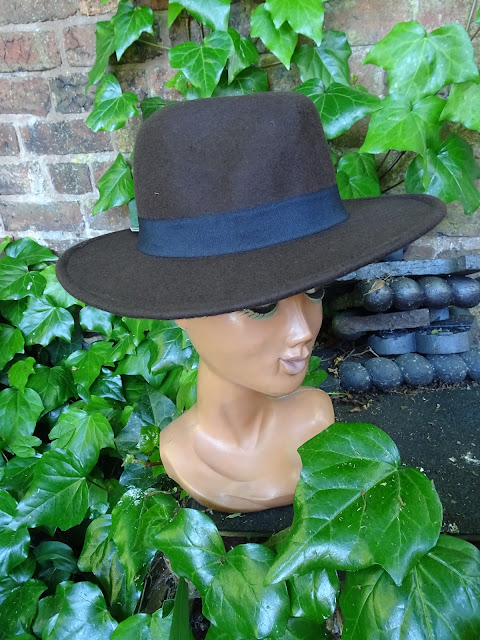 By now Jon was up and we had breakfast. Our friendly MyHermes driver turned up with a box containing my latest eBay win, a brand-new fedora handmade by a milliner based down the road in Shropshire. Jon left to do the post office & supermarket run leaving me to tidy the fern bed outside the gates, plant some nasturtiums in amongst the pyracantha and sweep up the debris from the holly tree which seems to be dropping leaves at an alarming rate. I'd just moved on to bindweed patrol when he got back. 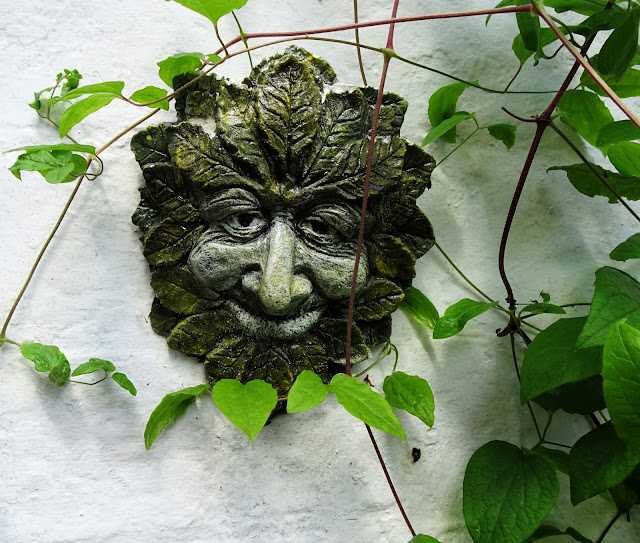 After a posh coffee in the sunshine, I decided to crack on with another woodwork project, a windowbox to replace one of my ancient galvanised ones that had rotted away so, after a rummage through the woodpile found a few suitable planks, sawed them to size and nailed them together. Voila, a not too wonky windowbox! 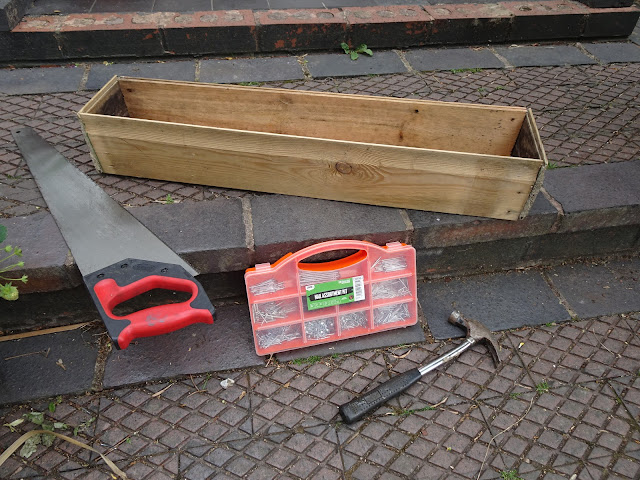 In my excitement over my vintage Annabelinda wool pinafore dress, I never photographed this Indian cotton shirred top I bought for £1 from the same charity shop. It still had the original shop tags on (it was only £5 to start off with) and is perfect with my block printed skirts. I'm loving that the chazzas are full of XS clothes, I can only assume loads of people lamped loads of weight on during lockdown and can't fit into them anymore - great for us little ones! 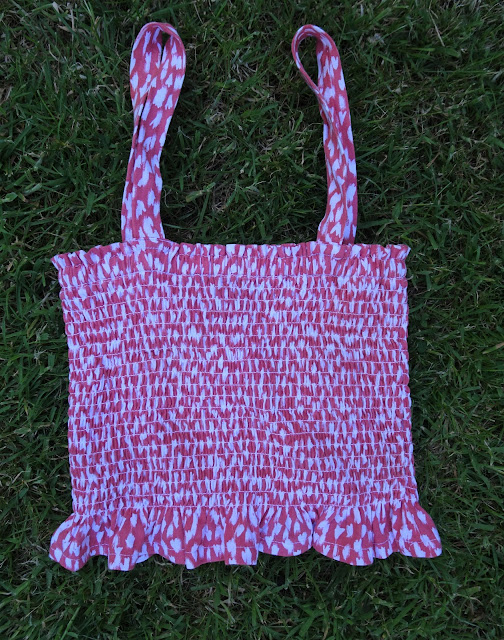 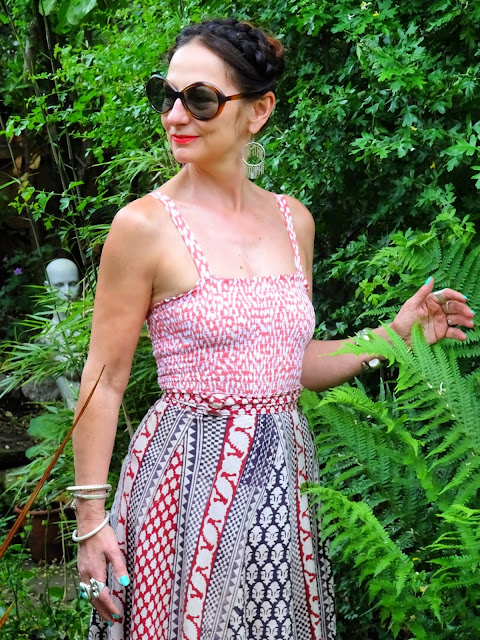 I joined Jon in the kitchen for a bowl of noodles before painting my woodwork. Meanwhile, Jon tidied the area where we store our Edwardian edgers before planting out the red cabbage & gherkins and thinning out the parsnips. Whilst the paint was drying, I moved the saplings I'd potted up the previous day to the patio and sprinkled some horticultural grit around the top of the pots.

Continuing with my wilding of the new lawn, I dug up some clumps of buttercups and fox & cubs and embedded them into the turf. Fox and cubs are part of the daisy family, their proper name is Pilosella Aurntica & they're also called golden mouse ear and devil's paintbrush. They grow prolifically in our garden which is just as well as Jacob loves munching on their pretty orange flowers.

It was Jon's turn to be on watering duty whilst I planted my windowbox with nasturtiums which, going by how all the others I've grown this year are performing, should be enormous by this time next week. 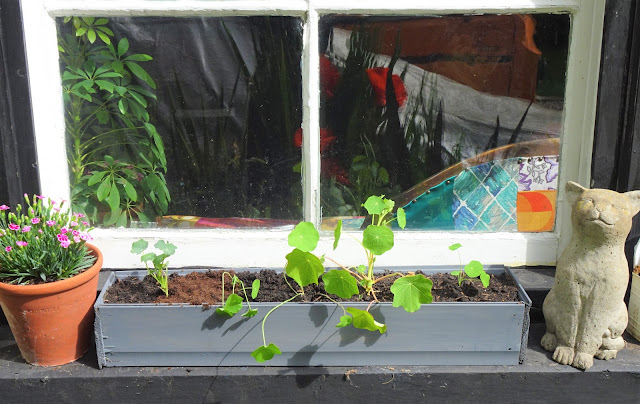 We had an alfresco beer and had a flatbread with salad (homegrown lettuce, coriander, chives and rocket). 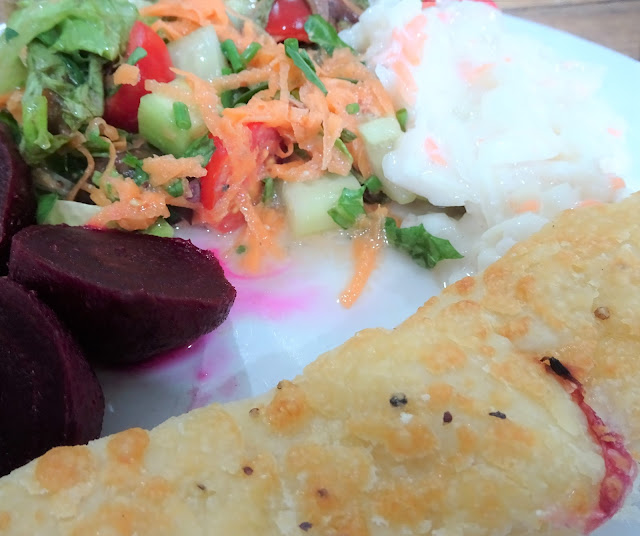 Later we watched Italy Vs Turkey and drank rum. 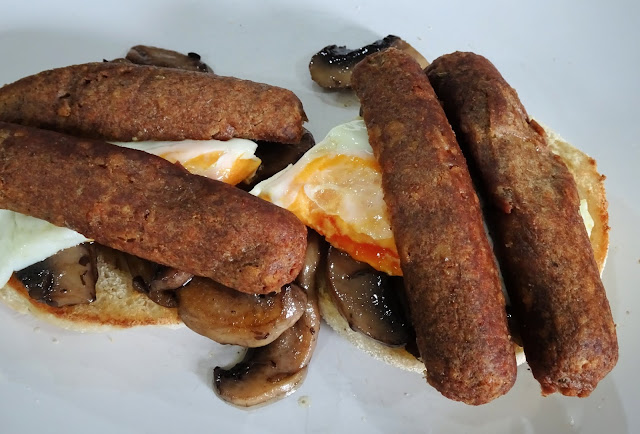 On Saturday Jon got up first, made tea and brought it back to bed where we lay and read until just after 8am. While Jon started breakfast I stripped and changed the bed, chucked it in the machine and pegged it out to dry in the sunshine. Breakfast was veggie sausages, mushrooms and a fried egg served on a toasted muffin (Jon had bacon). 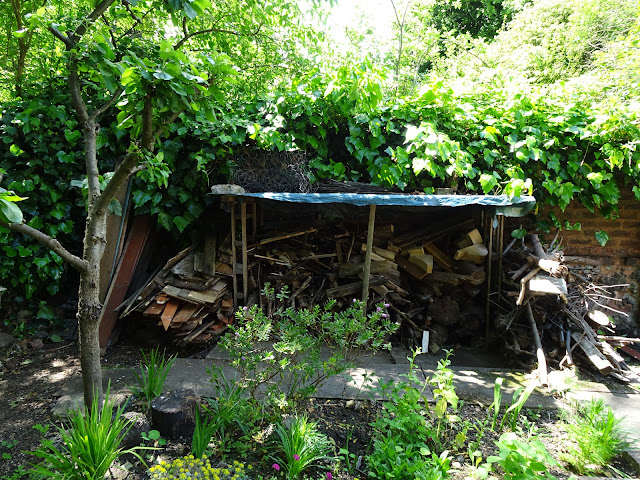 It was another gloriously warm and sunny day. Jon mowed the lawn and together we sorted out the woodpile, a mess from our constant raiding it for interesting planks to recycle. 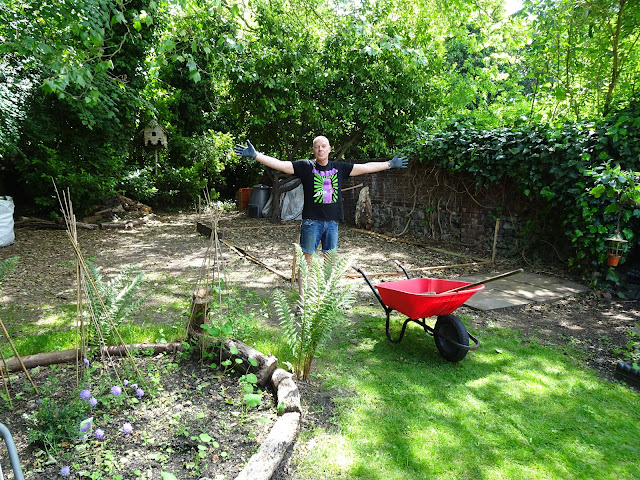 There were loads of evil brambles tangled in the ivy that needed chopping down, too. 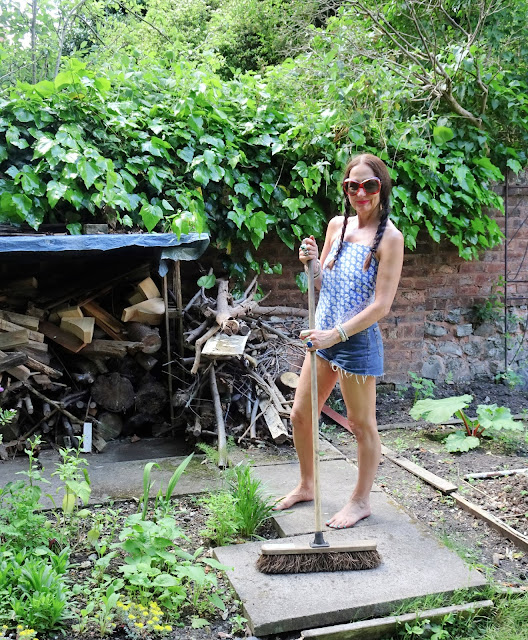 The shedding holly tree got a radical pruning, we decided the leaf drop was from the lower branches brushing on the coal house roof.  Once Jon had sawed them off we dragged them into the garden and ran them through the shredder. 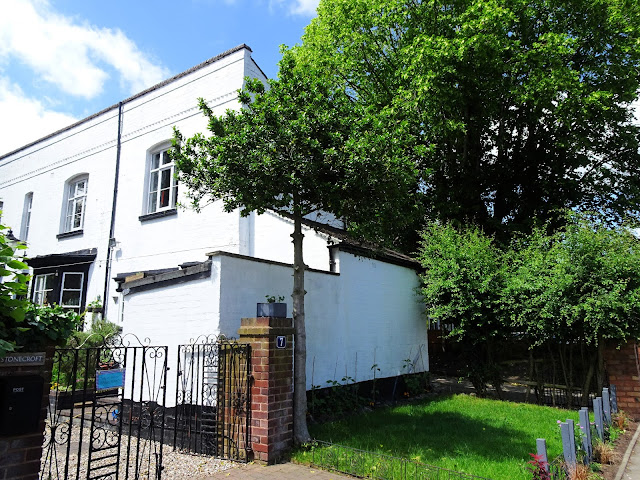 You can see the strange shape of our house. Originally three 18th century farm labourers cottages, it's one room deep with each one leading into the next. There are no windows at the back of the house and just the spare bedroom window at the side. 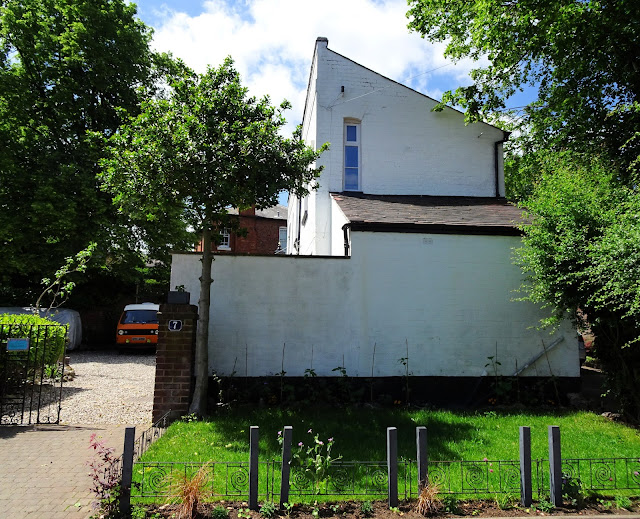 With its hazy blue fleshy leaves and dainty purple blooms, we're mesmerised by the beauty of this plant, which Jon grew from seeds he'd foraged last Autumn. They're springing up all over the garden. I can't believe they've got such an ugly name, honeywort (and the proper name, Cerinthe Major is such a mouthful!)

Jon adjourned to the kitchen to watch Wales vs Switzerland and I stayed in the garden, not wanting to miss any sunshine. I finished the wonderful Washington Black and started The Last Kashmiri Rose, a gripping detective novel set in 1920s India. 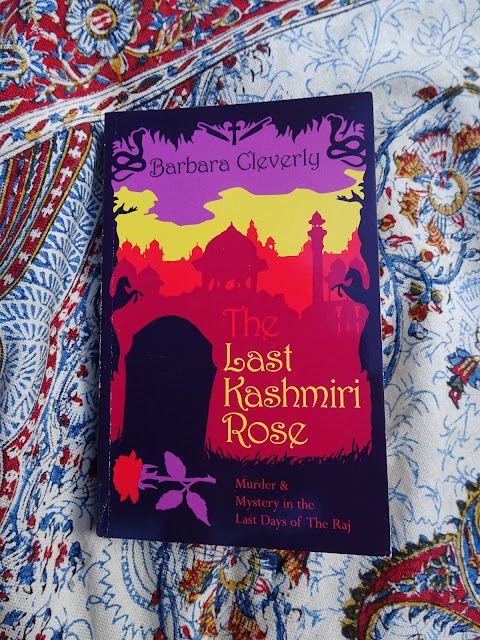 Jon came out to report the match was a one-all draw and joined me on the blanket for a snooze in the sunshine. After we'd watered the garden we went inside for Finland vs Denmark, watching in abject horror as Christian Eriksen collapsed, received CPR on the pitch leading to the match being abandoned. (What a relief - we've just heard the news that he's sitting up in his hospital bed wondering what the hell happened.) 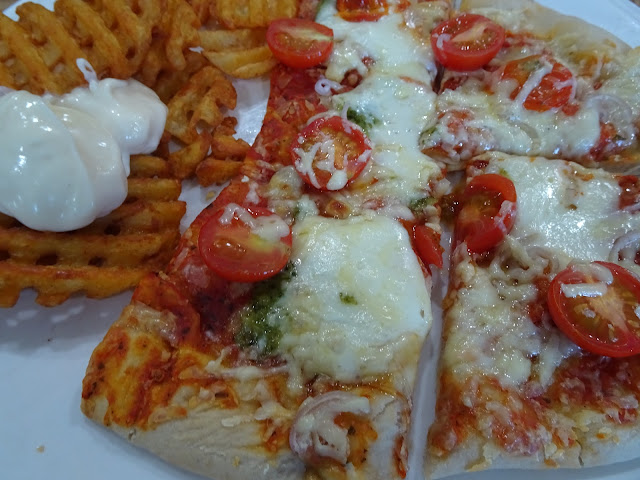 Tea was pizza with potato lattices and an ice-cold Corona to settle our nerves. Later we'll be watching Belgium vs Russia, cheering on Belgium, our friends, Ann & Jos's national team. Needless to say, we'll be joined by a bottle of rum.

England are playing tomorrow & we're already on tenterhooks. Hopefully, a trip to the clearance chazza first thing in the morning will be a welcome distraction.

See you soon and come on, Eng-er-land!