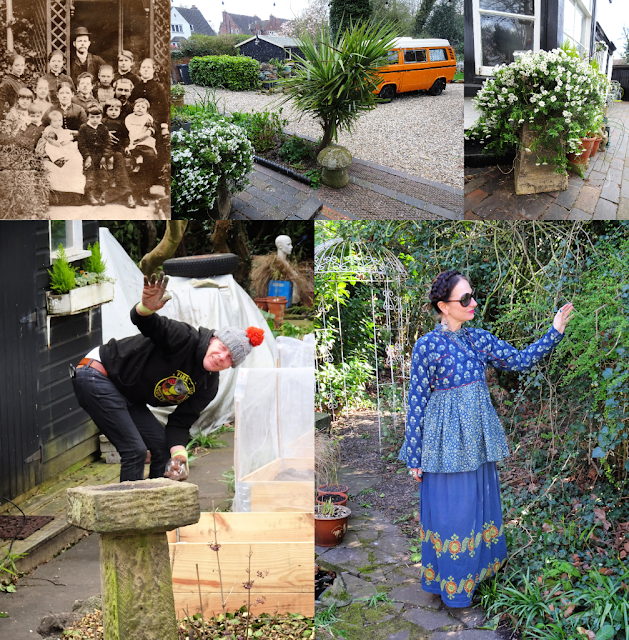 I had every intention of getting up and doing my Wii Fit workout when I woke at 6am on Easter Monday but decided I couldn't be bothered and waited for Jon to get up. He brought tea back to bed and I read until 8am. We had banana porridge for breakfast, I did a load of washing and hung it up outside just in time for snow, which thankfully didn't stick. After a quick sweep of the stairs, kitchen & downstairs rugs we lit the wood burner and worked on Jon's family tree until midday. We got as far back as the early 18th century and discovered that part of his Dad's branch of the tree came from The Cotswolds (a possible road trip for the Summer?) 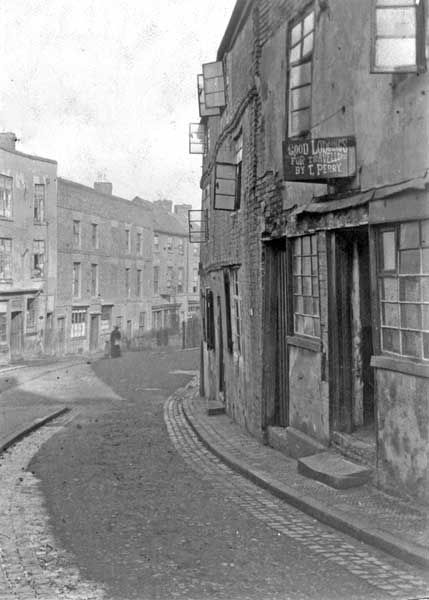 An ancestor closer to home was Jon's great-grandfather, Alfred Baker (1854 - 1930), a master carpenter. He married Julia Ann Bibb (1857 - 1898) who was recorded as being unable to read or write. She was born in New Street, Walsall, which ran adjacent to St Matthew's Church and on our regular litter-picking route. It had remained virtually unchanged since Mediaeval times until the slum clearances of the 1950s (the photo is from the 1890s). Her father, Arthur Bibb (1836 - 1908) was, according to the 1861 census, a whip maker. She died at the age of 42 in Richmond Street, two streets away from the house where Jon grew up, the cause of death given as Morbus Cordis which used to be the term used when there was sudden unexplained death from natural causes. The Bibb family can trace their lineage back to Thomas Mills who was born in Walsall on 10th March 1650 and has a family crest. 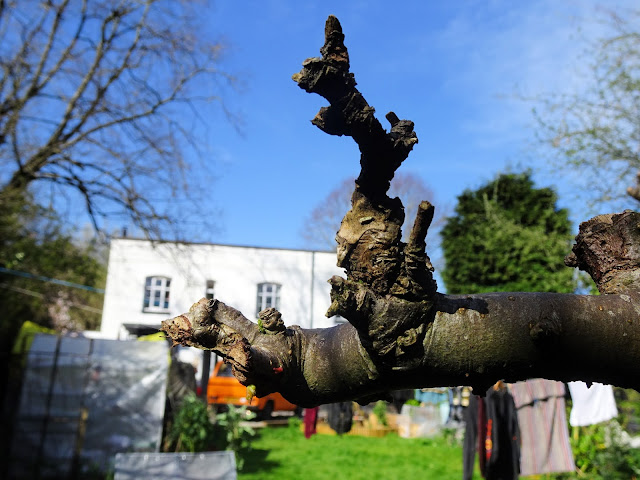 After noodles we braved the outside - it was lovely with the sun on our backs but bastard freezing out of it. I planted my Chinese lanterns, tied up both the clematis which had a bit of a growth spurt in the last few days and emptied the last of the pot plants on the patio to make room for the olive tree when the danger of frost is over (which won't be any time soon). 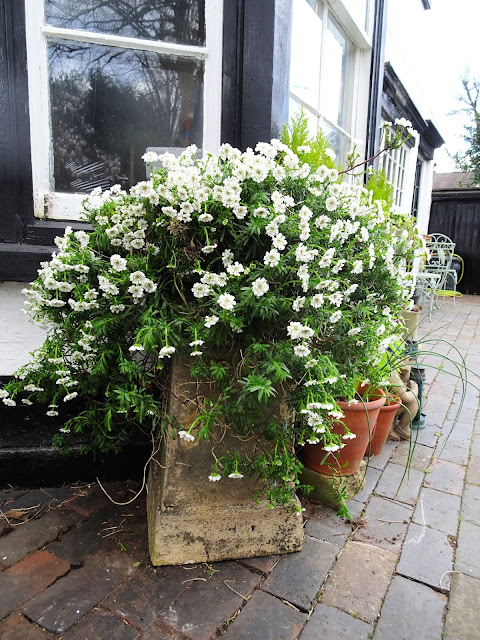 I don't even remember planting this candytuft in one of the old chimney pots Grandma hauled out of a skip back in the 1960s when everyone was getting central heating fitted and bricking up their fireplaces and it comes back year after year. 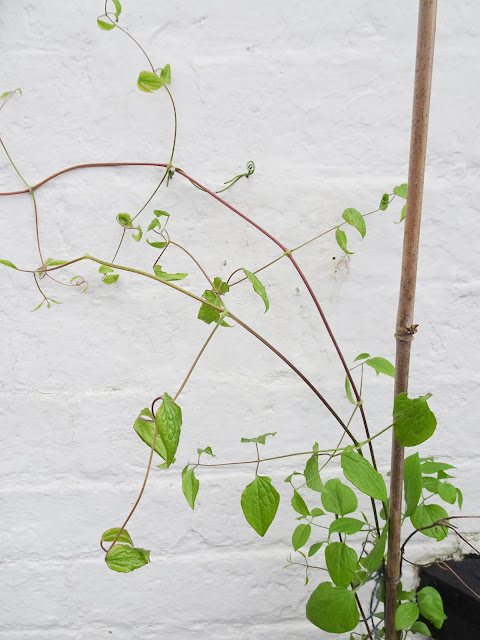 Jon gave the front of the house a tickle with masonry paint while I swept the patio. We had a posh coffee al fresco but scurried inside to warm up soon afterwards. 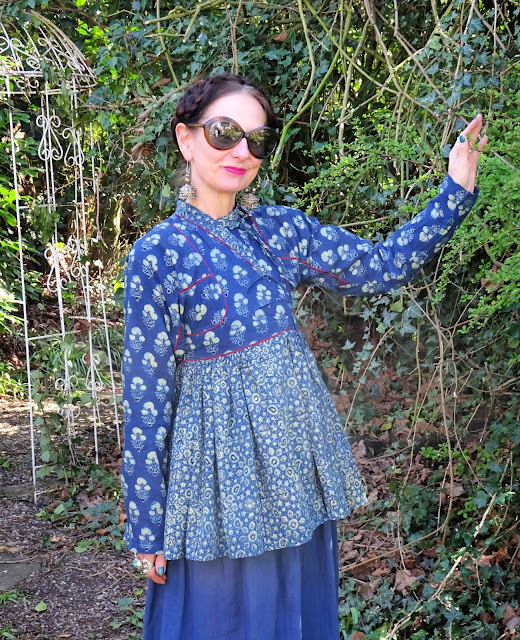 Of course, my new kediya needed an outing. I wore it over my vintage embroidered maxi dress. My hair was a disgrace after sitting next to Adrian & Liz's firepit on Saturday afternoon so I tamed it by plaiting and pinning it up. 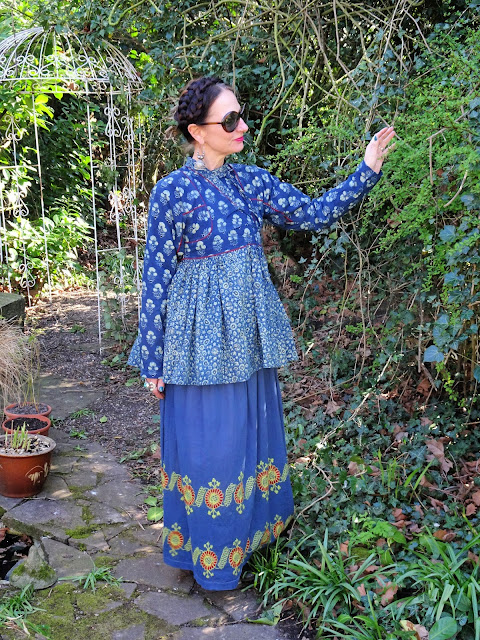 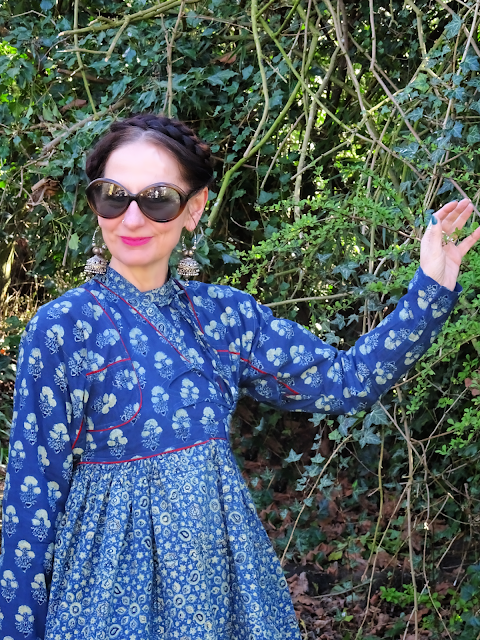 After thirty minutes of self-care (which included a hair wash), we watched BoJo's announcement accompanied by a glass of wine. We had a paneer curry with nan bread for tea. 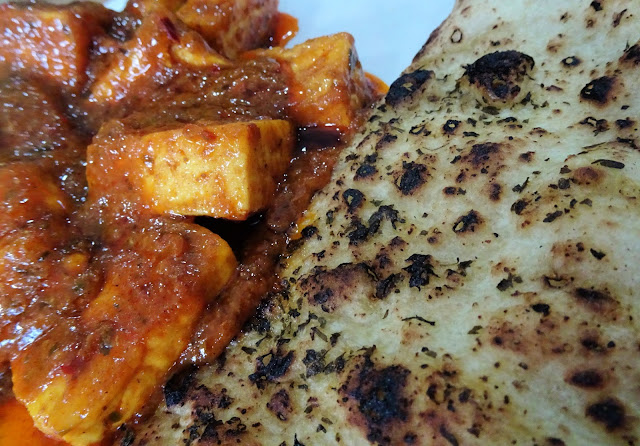 Later we caught up with Grayson Perry's Art Club and a couple more episodes of Waking The Dead although with the last couple of days of gardening I was struggling to stay awake. 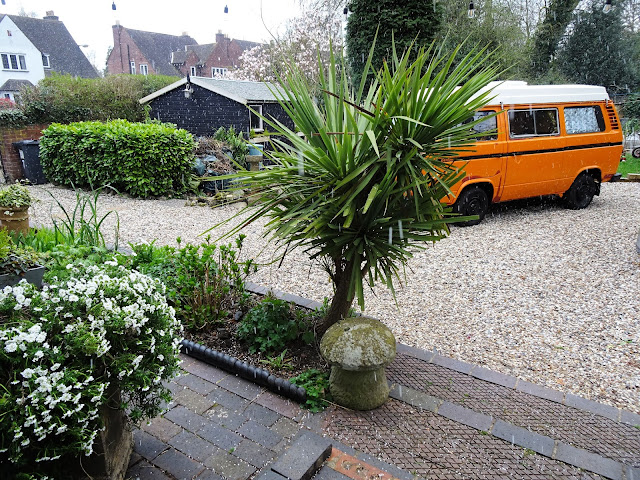 On Tuesday I did my Wii Fit workout and wrapped the weekend eBay sales. We had toast for breakfast as Jon hadn't been to the shops since Thursday and we were down to a solitary orange. It was a bitterly cold day although gloriously bright and sunny. Jon popped to the post office and did a supermarket run and was back just before the snow started. I continued with the family tree, researching my maternal grandma Joan's branch of the family, managing to get as far back as 1708. 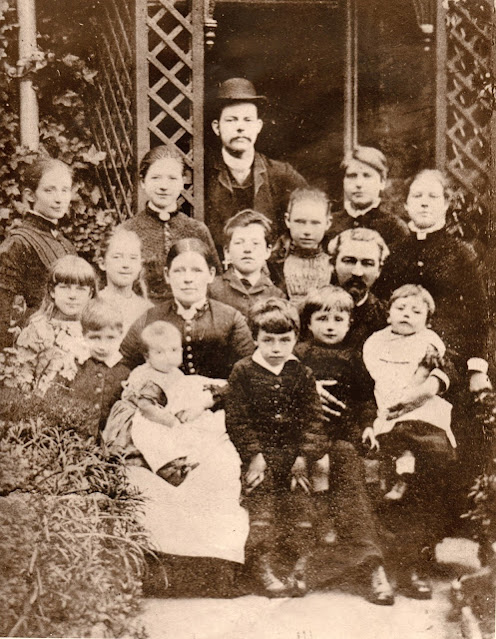 This photo of the Coppack family of Chester has always been in my family, I'd always assumed they were distant cousins but it turns out that Sarah Ellen (1841 -1903) & John (1841 - 1898) were my great-great-grandparents. They were near-celebrities in Victorian Chester having fourteen surviving children. Evaline Maud (1875 - 1944) was my great-grandma (mother of my grandma). Here is she with her mother and six sisters, Annette, Mary Ellen, Isabella, Agnes, Florence and Mary. 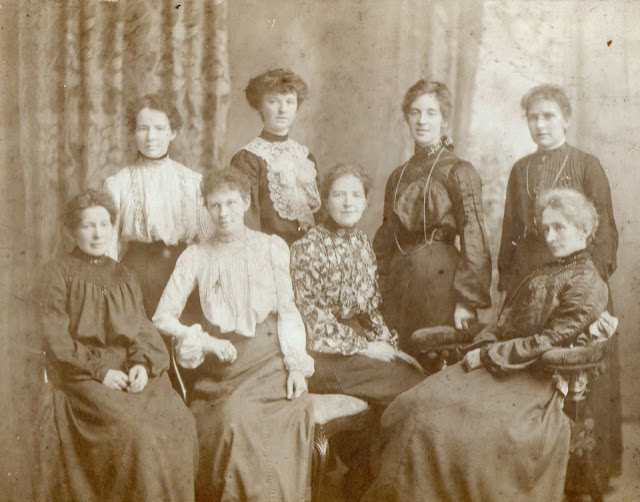 If you've ever visited Chester you may have seen the Blue Coat Hospital School on Northgate. This was founded in 1717 as a charity school for poor boys, the first of its kind outside London. In 1854, a statue of a Blue Coat boy was placed at the front of the building, after an appeal raised £25. The model for this statue was my great-great-grandfather, John Coppack. His father, also John Coppack (1812 - 1856) was a shoemaker in Northgate Street, his mother, Mary Greenway (1814 - 1853) had died before he'd enrolled in the school. 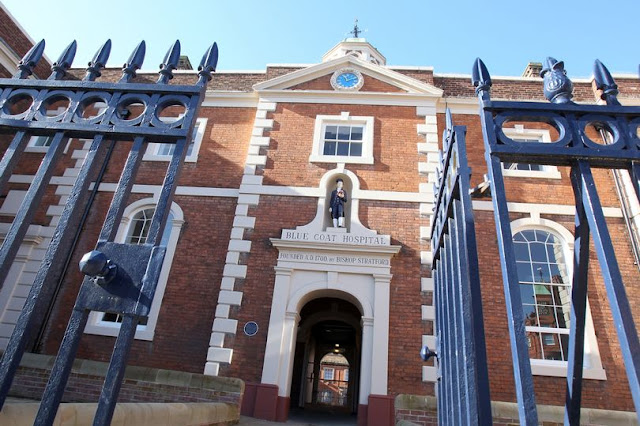 This framed print has hung in Stonecroft since my grandparents lived here. 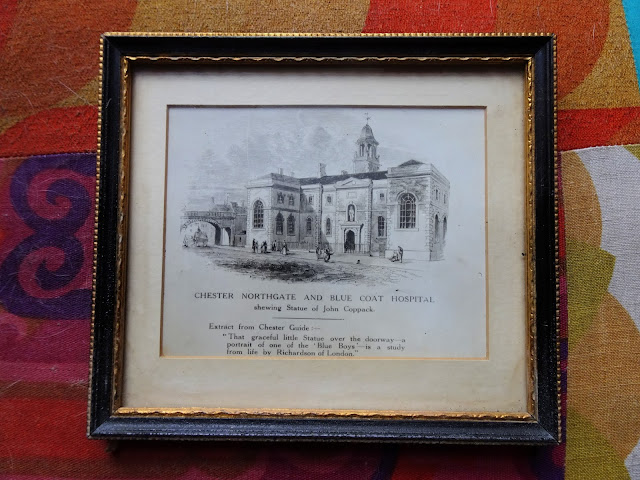 The council's fortnightly brown bin (garden waste) collection was due to restart after the winter break so after our noodles, we made sure it was filled to compacity and wheeled it out ready. I planted more sunflower seeds whilst Jon did radishes, Greek beans and courgettes. 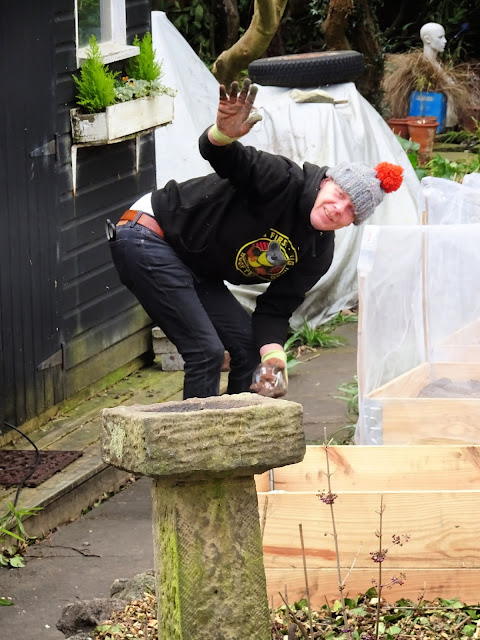 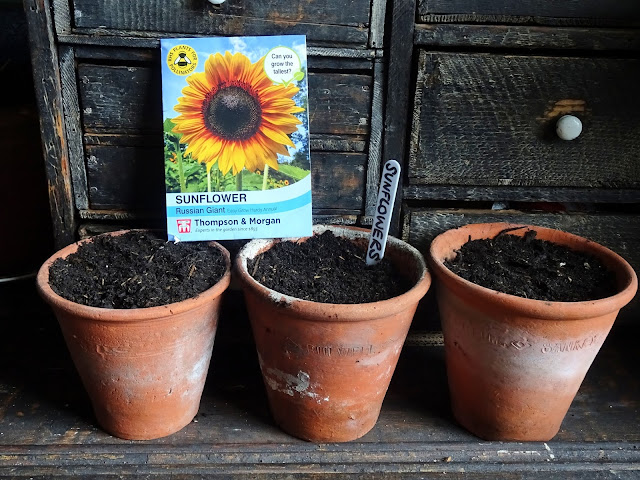 Jon bought these secondhand black denim Levis' before lockdown but despite them being the size he always wears, he couldn't do them up. The last time I wore this vintage Alpnani block printed tunic a couple of people commented that it would look good with jeans. As the Levis' are destined for the charity shop when it reopens next week (yay!) I thought I'd give them a try (they're massive round the waist but okay with a belt), confirming the reason why I don't wear jeans....life's too short for boring clothes. 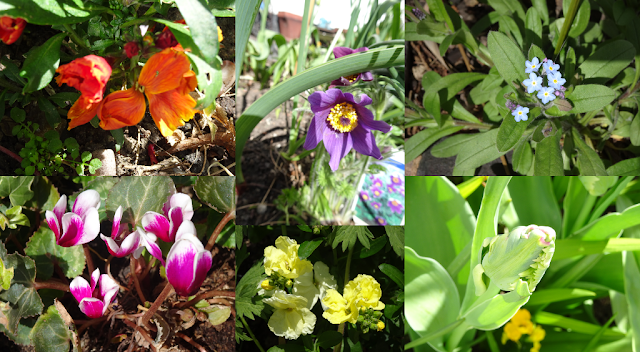 The rest of the afternoon was spent indoors. I started another craftivism banner after more posts about them on Facebook but had to rush to the Kinky Shed in the snow to retrieve a garment a TV company needed for a shoot on Friday (a 1960s gents raincoat). 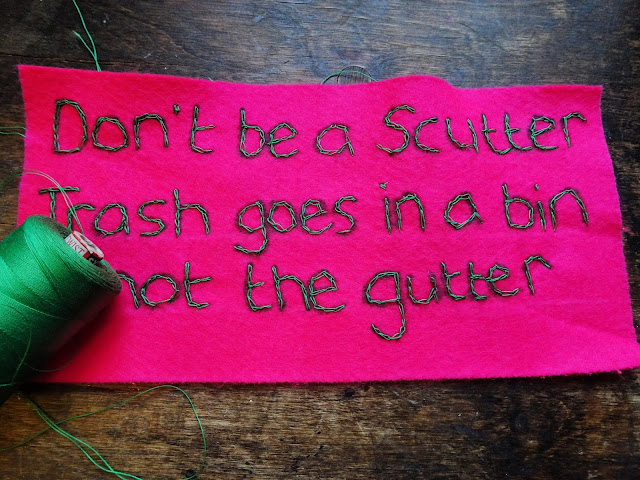 Tea was a posh quiche (from the bargain section) with salad. Tonight's crime night, a catch-up of 24 Hours in Police Custody, we hadn't realised there was a new series. 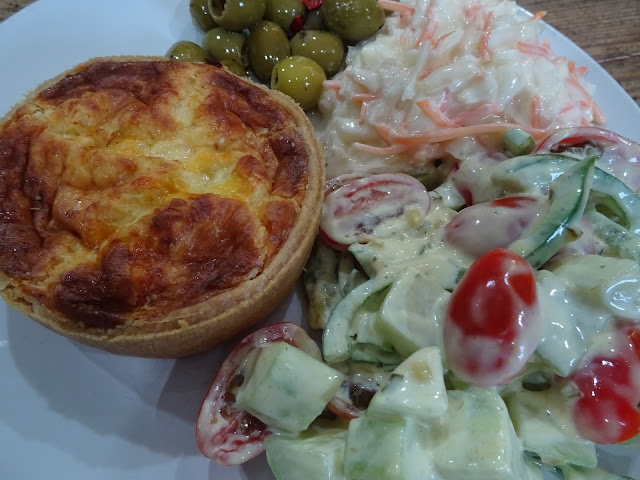 Now restrictions have been eased we're off for our first National Trust visit in 4 months tomorrow. By the look of the weather forecast, it looks like we'll be wearing thermals!

Email ThisBlogThis!Share to TwitterShare to FacebookShare to Pinterest
Labels: Block Print, Craftivism, Family, Gardening, It's All About Me, Jon, Our House, Outfit, Pets