On Monday, after my first Wii Fit workout of the week, I switched the TV over to the weather forecast. As torrential rain was expected for most of the week I emptied the contents of the laundry basket into the washing machine and pegged everything outside on the line. I'd just caught up with blogland when Jon came downstairs and joined me for breakfast. 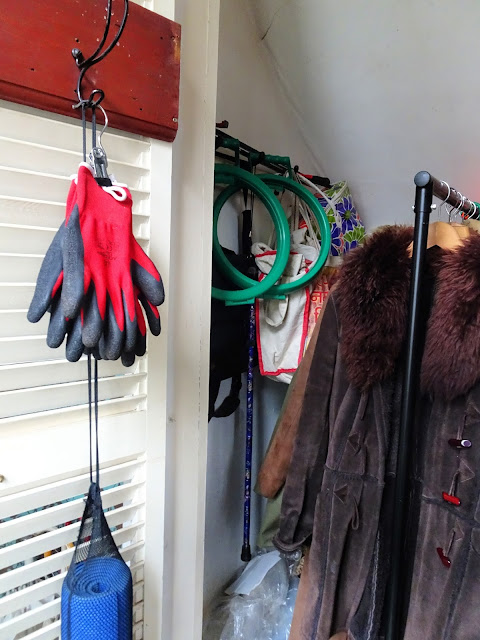 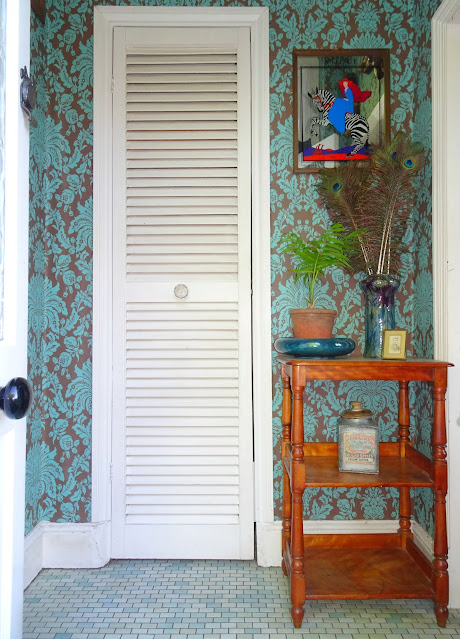 Jon did the post office run and a top-up grocery shop whilst I sorted out the Cupboard of Doom although it's probably going against the Trade Descriptions Act to call it that these days as it's been pretty tidy since lockdown - and my fondness for housework - started last March. I shifted the last bag of festival stock to the Kinky Shed, making more room for our litter picking gear, then swept and mopped the floor. 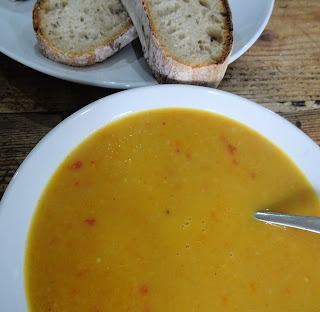 Once Jon had unpacked and sanitised the shopping it was time for lunch, spicy carrot and parsnip soup with a couple of slices of Ray's delicious sour dough bread. 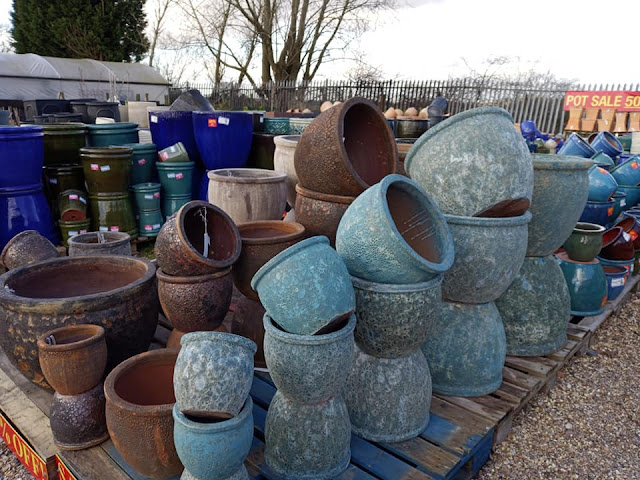 We went to the local garden centre to stock up on topsoil and to have another look at the half price pots. I was very restrained in just buying two. Back at home Jon set to work filling the raised beds with soil and I repotted our cheeseplant. The huge embossed white pot will house my olive tree which I was planning on doing when I got back but a sudden blast of rain had me abandoning my intentions and scurrying up the garden to rescue the washing from the line. 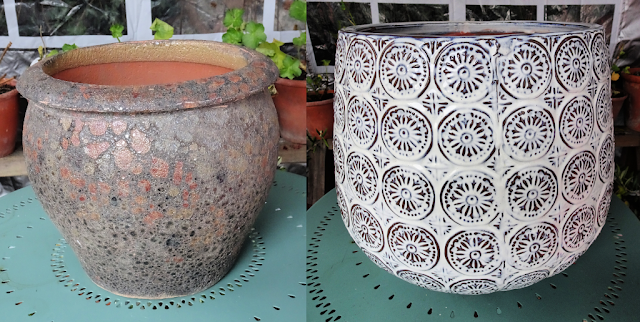 Before I brought my cheeseplant back inside I scrubbed the fireplace and washed the vintage glass on the mantelpiece. 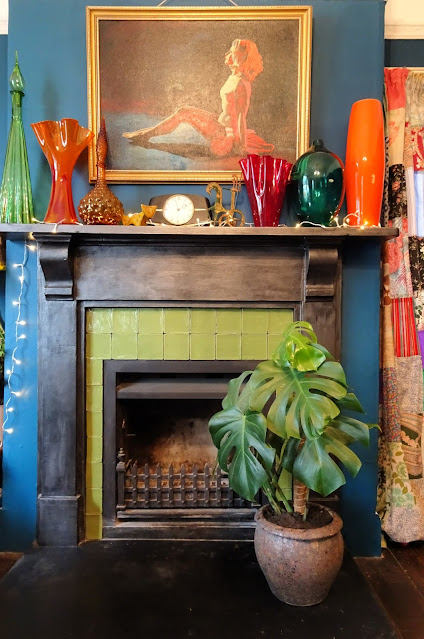 Wear:Sleep:Repeat saw another outing for my embroidered birthday dress, this time topped with the 1980s Anokhi jacket I'd bought from eBay last week. It was another cold day hence the Mongolian lamb scarf (jumble sale, 2007), beer mittens and a me-made pompom hat. 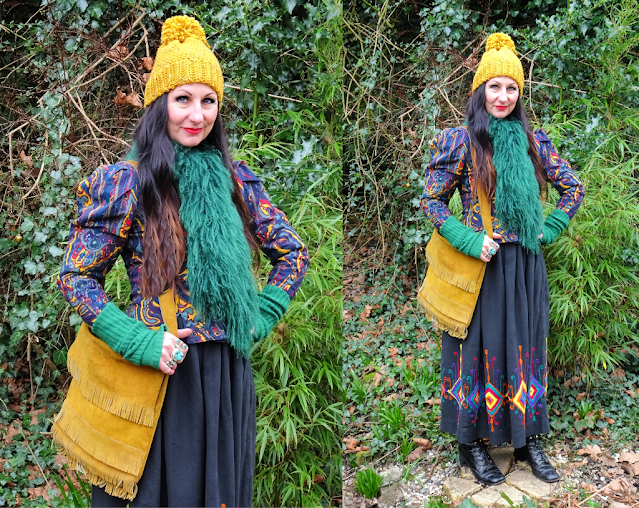 Here's my jacket without me in it. Anokhi used woven red labels in the 1980s. Back then a UK size 12 had a 34" bust and 24" waist, not modern size 12 with a 36" bust and 29" waist. Anokhi garments of all eras have French seams (not overlocked ones) and the prints are always beautifully aligned. 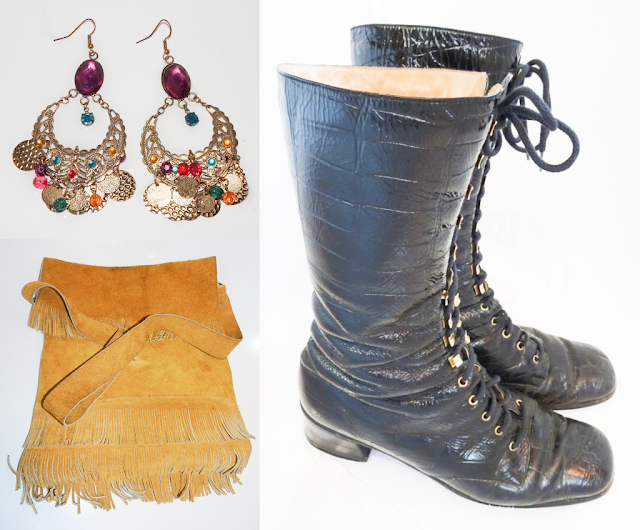 In my last post Beth had enquired about how I keep my suede clean. My secret weapon is this cleaning block, it's a bit like an eraser, you rub it gently on any marks and they'll usually disappear. I knew that I'd had it a while but when I checked the box discovered that it was made in West Germany. It deserves a starring role in Deutschland 89. I have checked online and you can buy similar. In the past I've had some success by washing suede clothes in the machine (on a 20°C wash) and hanging them to dry away from direct heat. 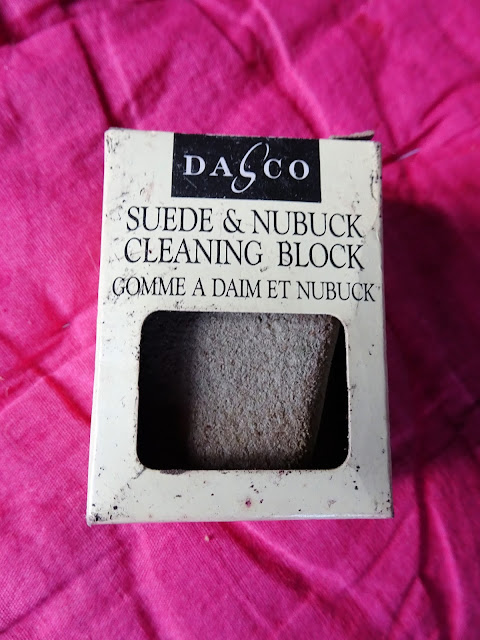 The rest of the afternoon was spent crocheting. I loved the muted tones of this "Cotswold" wool. 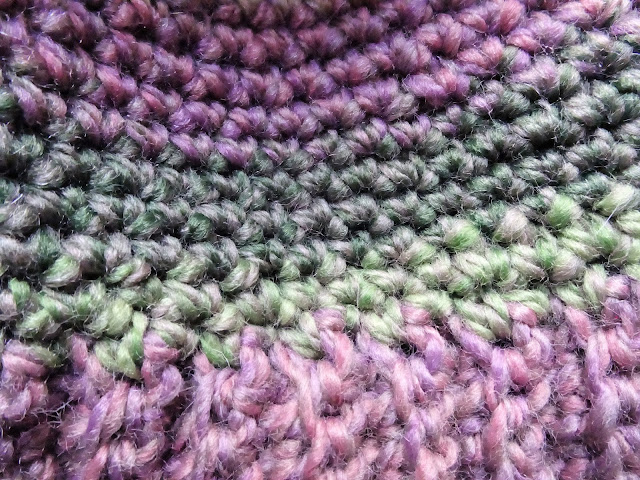 Tea was spaghetti with Jon's homemade tomato sauce with purple sprouting broccoli harvested from the garden, basil leaves from the plant I grew from seed last year and some grated Cheddar. We'd started watching the archaelogical documentary series Raiders of The Lost Past the previous evening (The Minataur's Palace) and continued with the other two episodes (The Viking Ship & The World's First City). I'd been looking forward to Unforgotten all week but it had been postponed while ITV aired that interview, which neither of us had any interest in. 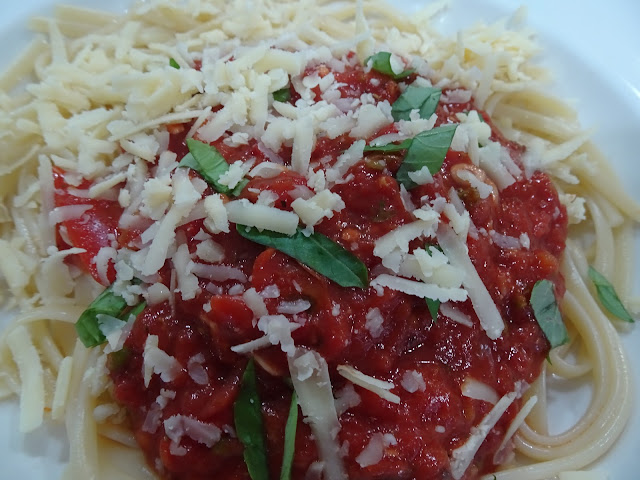 On Tuesday, after my Wii Fit session, I put away the previous day's laundry and caught up with Blogland. After breakfast I sat at the kitchen table and rehemmed my quilted housecoat and then dragged out my desk and swept the floor, pipes and radiator behind it. 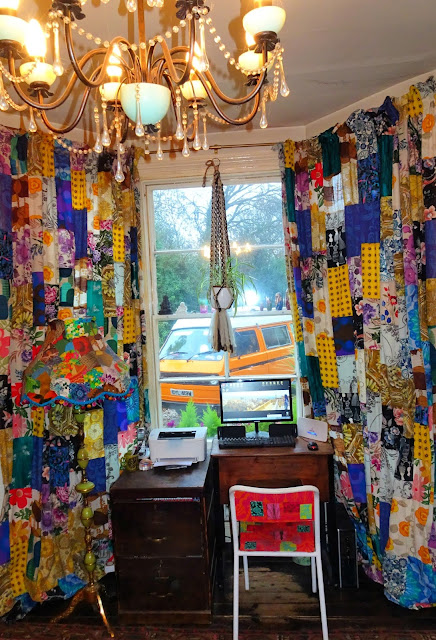 Jon popped back to the garden centre for another few bags of topsoil while it was still on offer. I browsed Ebay and bought a vintage block printed skirt I didn't really need but was at a Buy-it-Now price too good to miss. 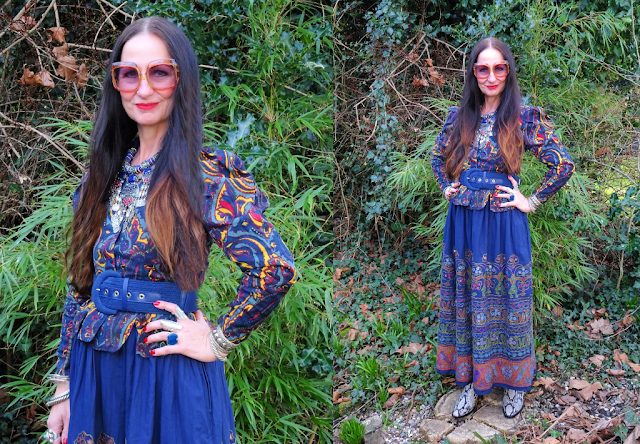 Wear:Sleep:Repeat saw another outing for my 1980s Anokhi jacket, this time worn belted with a Banjara mirrorwork skirt I'd bought from Katy back in 2019. It was a gloriously sunny day, hence the massive sunglasses. 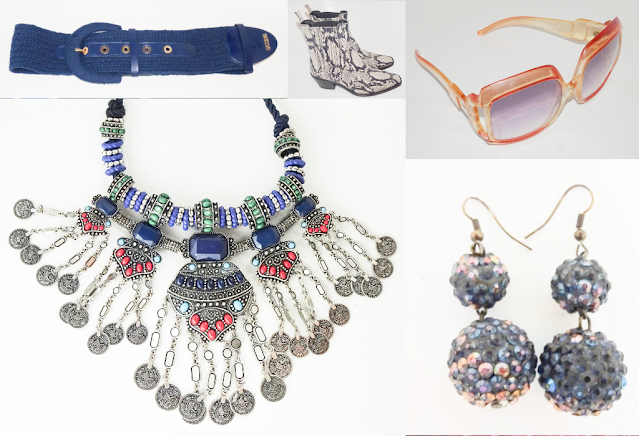 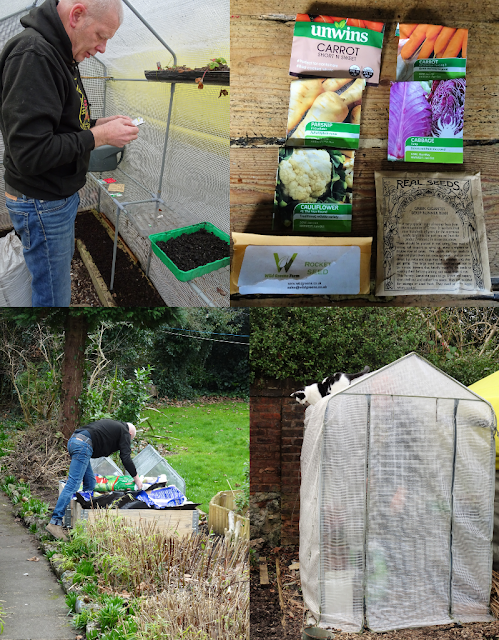 Jon had a busy day in the garden, filling the raised beds and planting seeds in both them and the greenhouse, not very helpfully assisted by Frank who decided to scale the greenhouse and wobble around precariously on the roof. Today Jon's planted rocket, Greek gigantes beans, two varieties of carrot, parsnips, cauliflower and red cabbage. 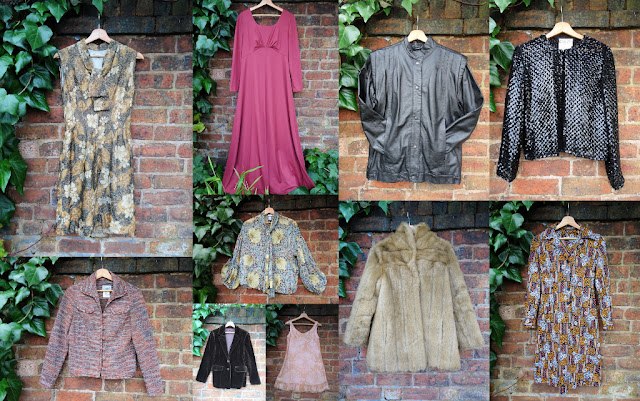 Meanwhile I photographed some stock in the garden and listed it on eBay. Tony called to say that he's booked in for his jab next Tuesday - he was 55 in February, a few months older than us, which means that it won't be long now! 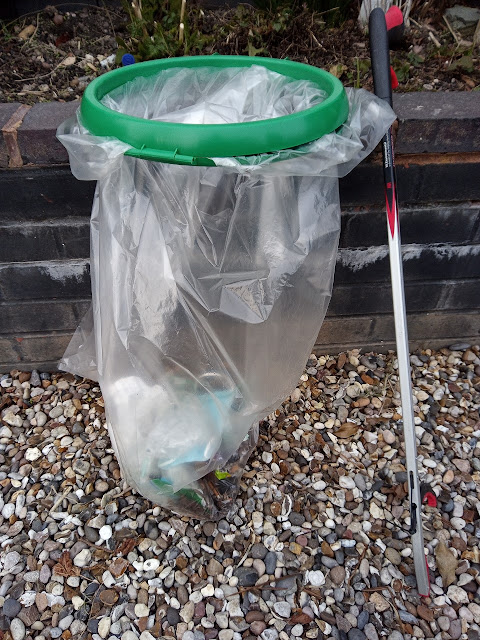 After a break for noodles we went on a block walk combined with a litter pick and, can you believe it? After weeks of filling a sack each, this was the sum total of today's efforts. With the schools going back yesterday it just goes to show who is responsible for all the littering. 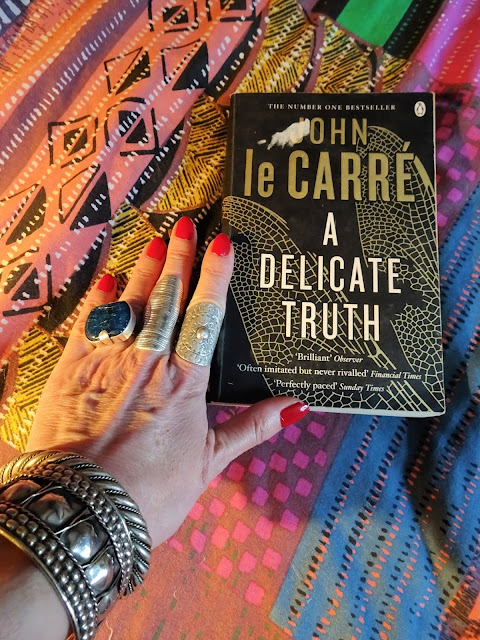 I'd only got a couple of chapters left of current read, The Retribution, so I had a lazy half hour on the chaise reading. It's now on Jon's to-read pile and I've found A Delicate Truth by John le Carré to start later. 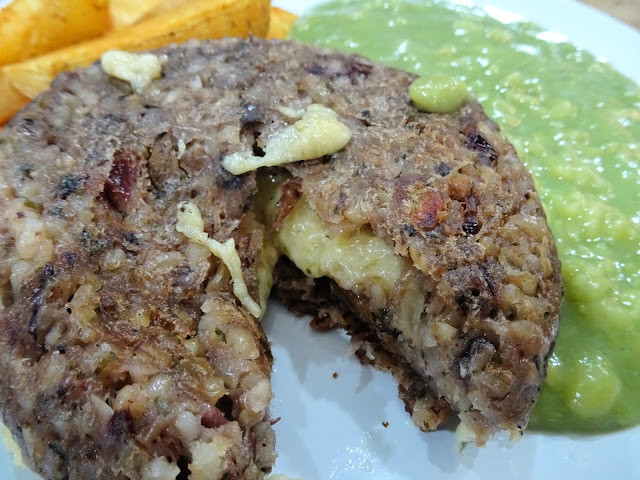 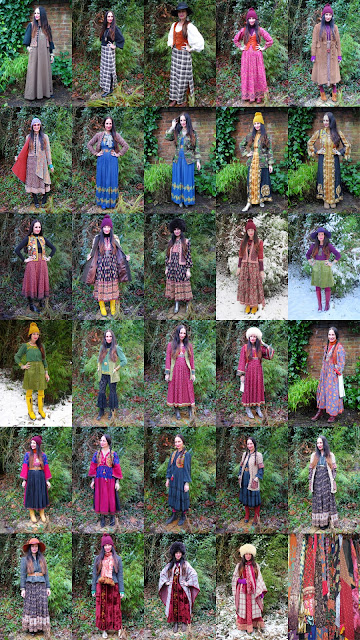 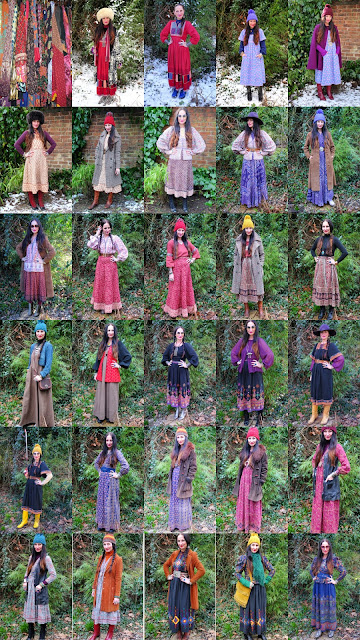 The Wear:Sleep:Repeat challenge has spread to two collages, I was struggling to see the tiny icons! 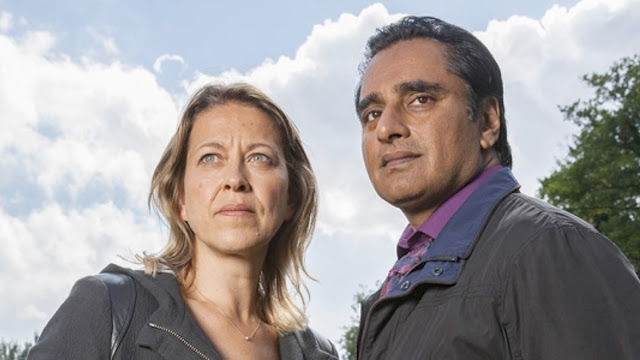 Tonight we'll be watching Interior Design Masters and the last night's postponed episode of Unforgotten (Sanjeev Baskar is married to a Walsall girl, the actress & author, Meera Syal, we went to the same school).