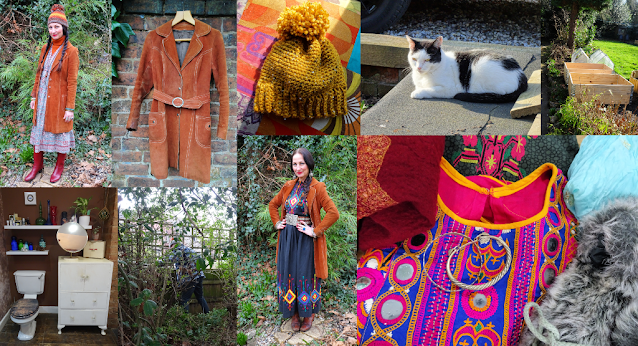 As is usual on a Saturday, Jon was up first. He saw to the lads, made tea and brought it back to bed where we lay and read until 8.30am. After he'd gone downstairs to put the sausages in the oven and make coffee, I stripped and changed the bed, loaded the washing machine and hung the laundry out to dry - Jon's new washing line worked a treat. 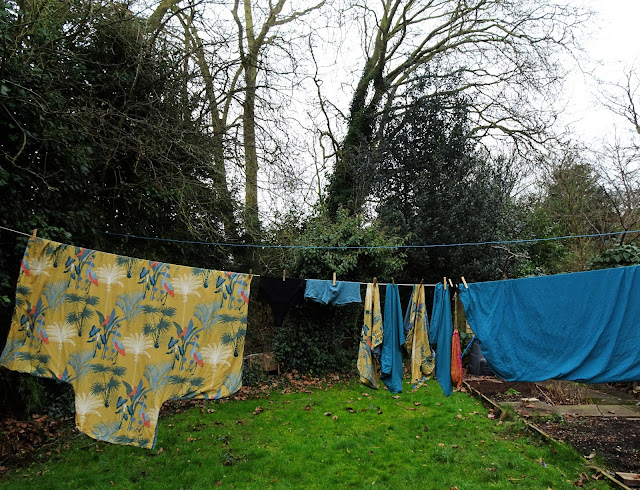 After our veggie sausage sandwiches we made a start on the garden.

Our fence, which runs parallel to the avenue, is topped with trellis which to passing scumbags is an open invitation to lob their litter through the gaps. To beat them, Jon has ordered some heavy duty netting to attach to the trellis and form a barrier. In preparation for the installation some serious chainsaw action was called for. Once cleared I got to work with my grabstick managing to fill a sack with empty vodka bottles (the litter lout's spirit of choice), endless cans of extra strong lager, sweet wrappers, pop bottles, numerous unused bags for life (why?), builder's rubble and even the interior of a car door. 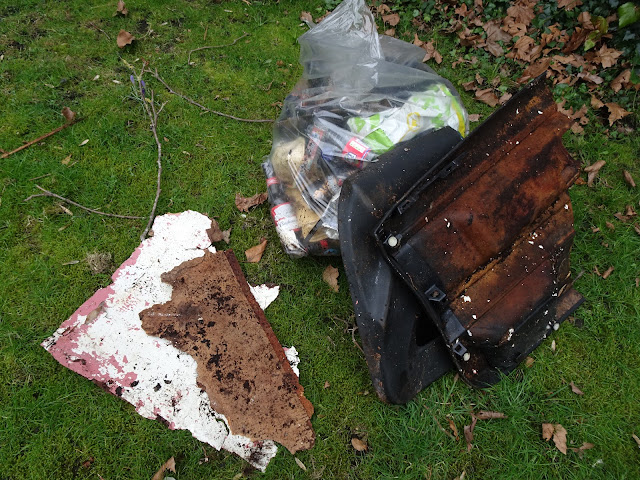 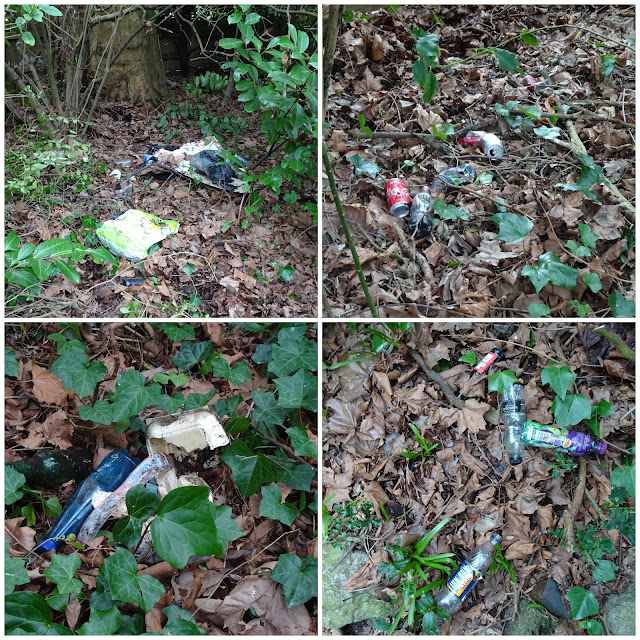 We were having a coffee break in the shelter when postman Izzy arrived with our passcode for the census which has to be submitted online on 21st March. There was also a exciting parcel from my friend Katy. 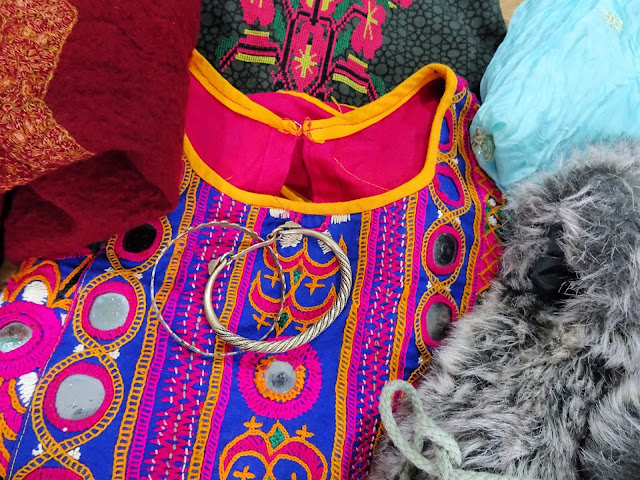 By 2pm we'd done what we needed and downed tools for the day, retiring to the house for the last couple of slices of beer & chilli bread liberally spread with butter. 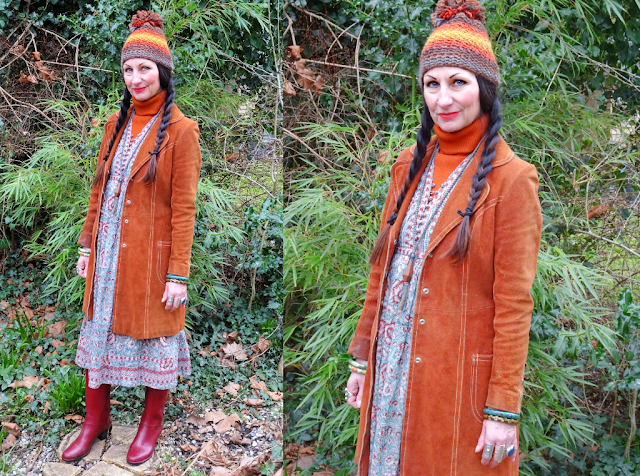 Sticking to my Wear:Sleep:Repeat challenge I rewore Friday's Anokhi dress, layering it with a charity-shopped rust poloneck and a fabulous 1960s tan suede jacket which was in the sack of clothes that my friend Cheryl had dropped round on Monday. 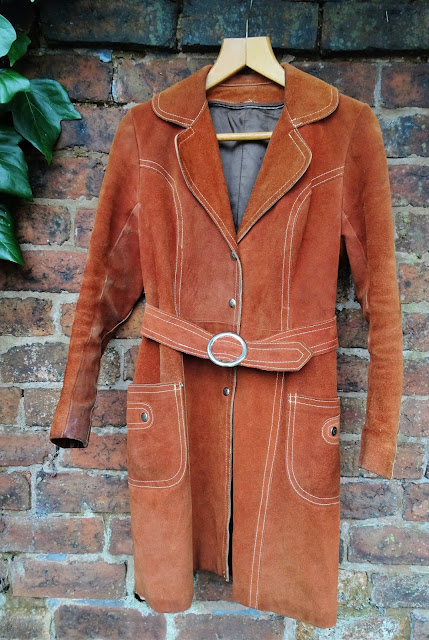 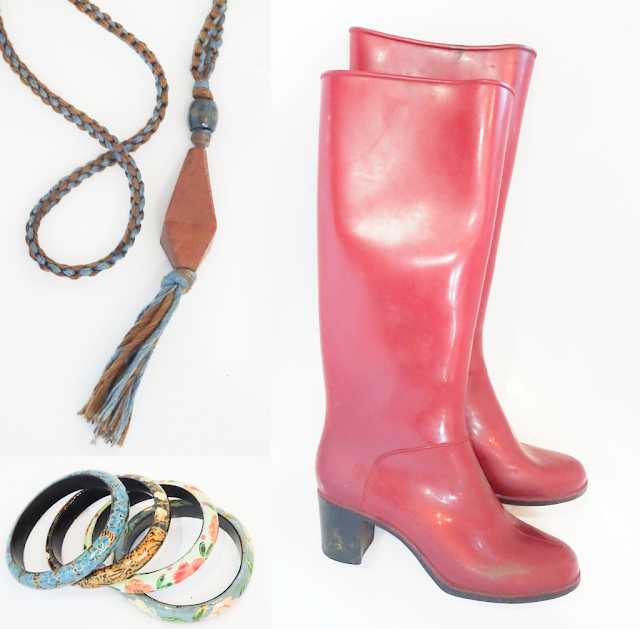 I've been thoroughly spoilt with my friends' clearing out this week, haven't I?  As well as the clothes and jewellery Cheryl passed on was this groovy 1970s mirror, now taking pride of place in the bathroom. 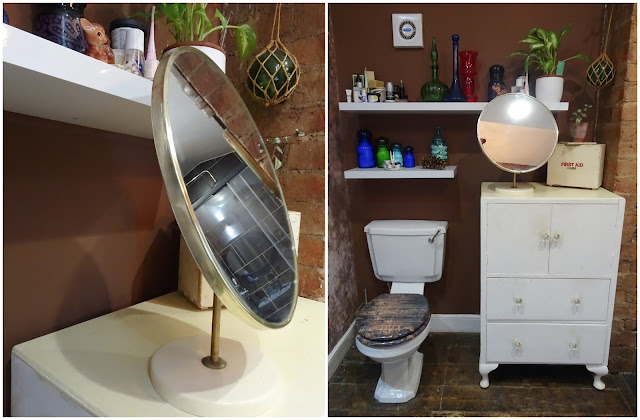 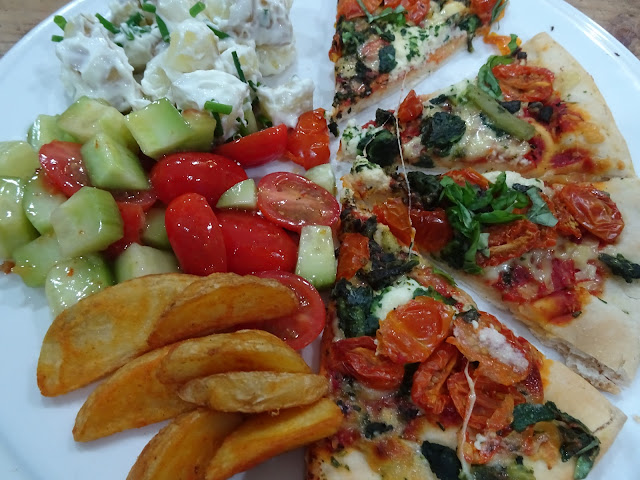 I was up first on Sunday morning, sweeping the kitchen floor, putting the last of the paperbacks outside and bringing mugs of tea back to bed where we lay and read until 8.30am. We had a couple of slices of toast for breakfast, watched the Andrew Marr Show and I finished the crochet I'd started yesterday, a hat for my friend, Jeni. 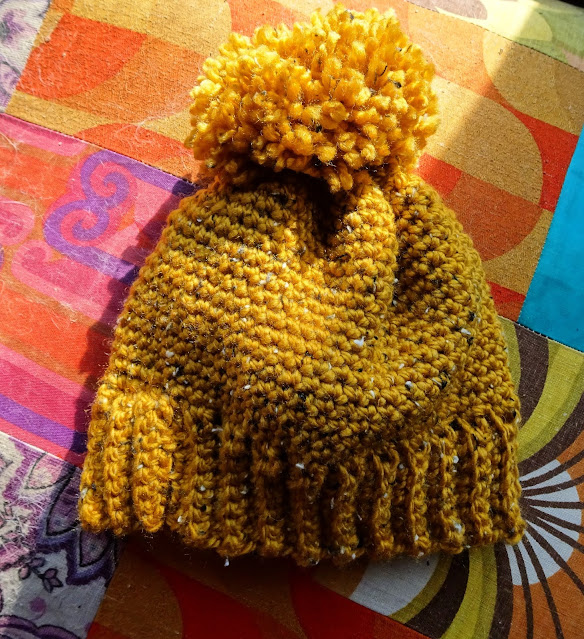 Jon had bought something online that needed to be collected from the seller's home, a  five mile drive down the road, so I decided to tag along. It was the first time we'd left Walsall since 2020 and it felt like such an epic occasion that I decided to wear the vintage dress I'd treated myself to for my birthday and which Ivana immortalised in her art. 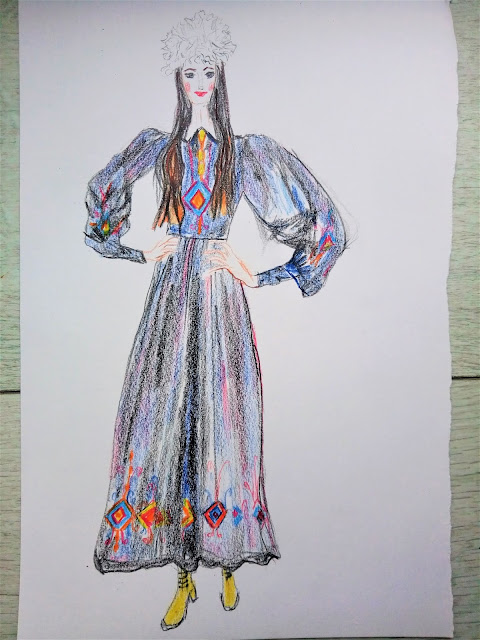 In line with my Wear:Sleep:Repeat challenge I wore Cheryl's suede coat over the top and with my hair super soft from a deep conditioning treatment and weekly wash, I swept it up into a fishtail plait. 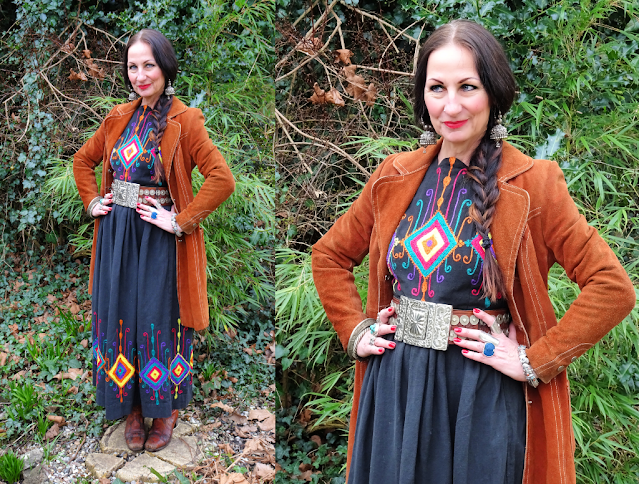 The details: Indian Jhumka earrings (from Cheryl), Gohill's exotic snakeskin boots (bought in 1966 by my favourite teacher who passed them on to me), Barry M Blood Orange nails, a stack of tribal bangles (including one that Katy sent me in yesterday's parcel), vintage Spanish leather coin belt made in San Sebastian (another of the treasures Cheryl sent my way). 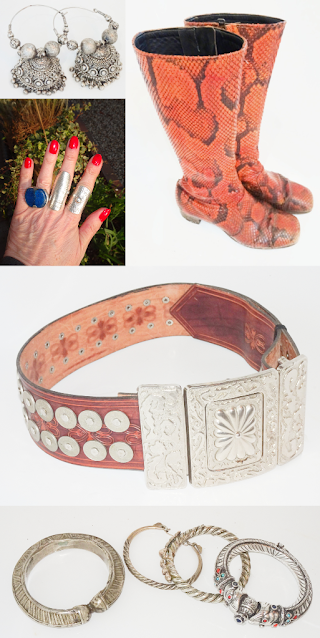 Our road trip was to collect these wooden raised beds which I'd spotted on Facebook. Jon was toying with the idea of making some himself but when he'd priced up the cost of the wood it was cheaper to buy these. 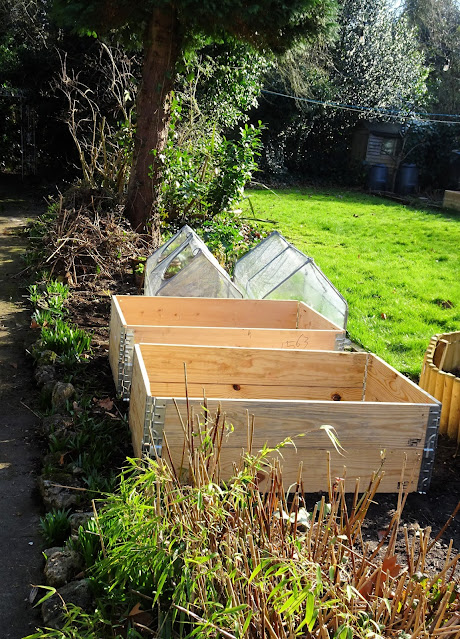 Just like last Sunday it was a gloriously sunny day but bitingly cold. Frank supervised (he's very good at that) as Jon played around with positioning the beds in the best position for sunshine. Tomorrow's task will be laying some weed suppressant (aka cardboard) underneath and filling them in readiness for crop planting when the danger of frost is over. 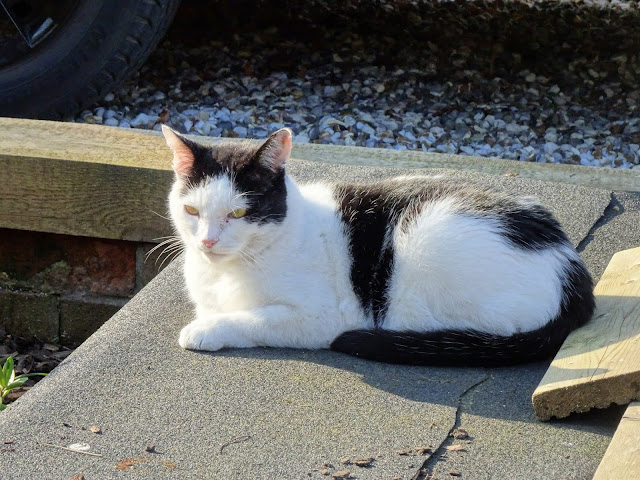 Meanwhile I cut back the ferns and raked the area over as we're planning on moving them to the pond area later in the week. I then wrapped my eBay sales ready for Monday's post office run. 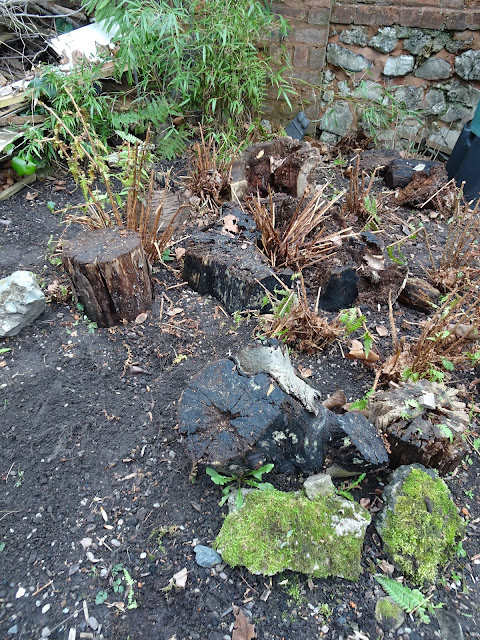 Lunch had been a half a chocolate waffle each I'd found lurking in the back of the cupboard so we were ready for our tea after all the excitement of a roadtrip to the outskirts of Dudley & some physical labour. 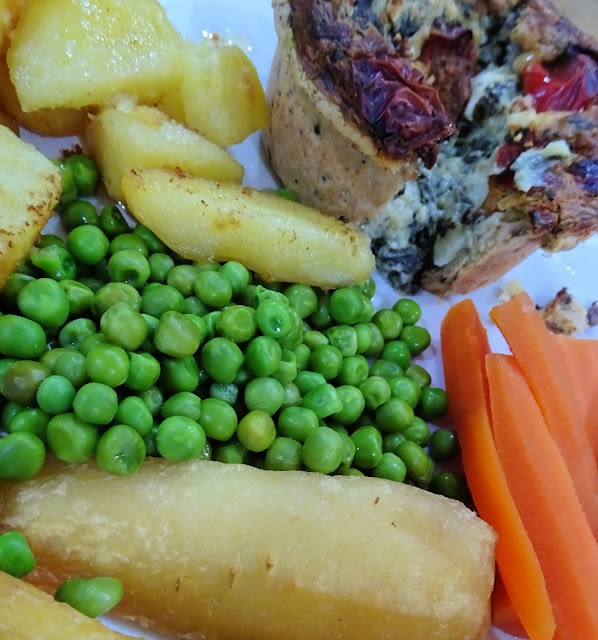 Tea was another pie from Tony. This time, spinach and pine nut with Greek feta and red peppers. Yum! 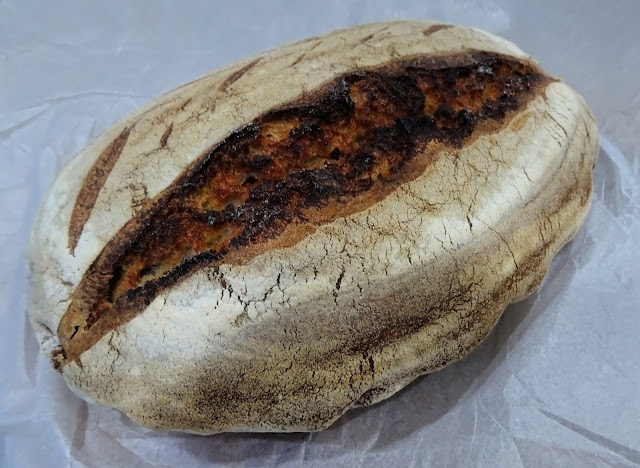 The entertainment for tonight is The Great Pottery Throwdown and episode 3 of Bloodlands which, if you haven't seen it yet, is tremendous. The European drama Facebook page, of which I'm a member, has a number of posts from people refusing to watch it as they can't stand James Nesbitt, prejudiced by Cold Feet. They're mad, he's a fantastic actor when he plays in straight (Bloody Sunday & The Missing spring to mind) and it's co-produced by Jed Mercurio, the genius behind Line Of Duty. 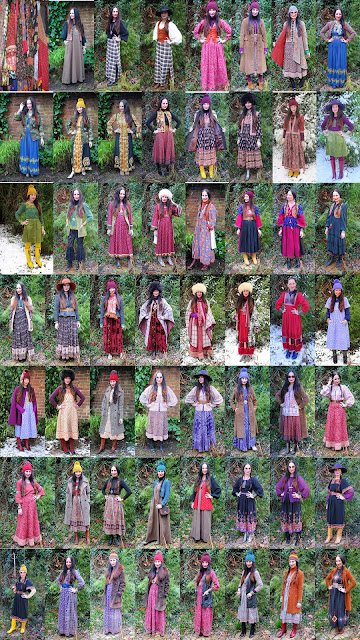 Stay fabulous and see you soon!