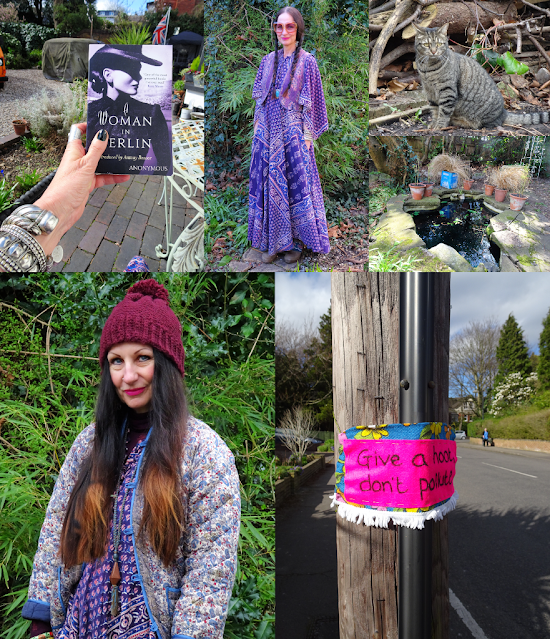 I was stunned to discover that it was almost 9am when I woke on Sunday morning. The previous day's leaf collecting must have wiped me out! I made tea, brought it back to bed and we lay and read for a while. When we got up we caught the end of The Andrew Marr Show and had a couple of slices of toast each for breakfast. 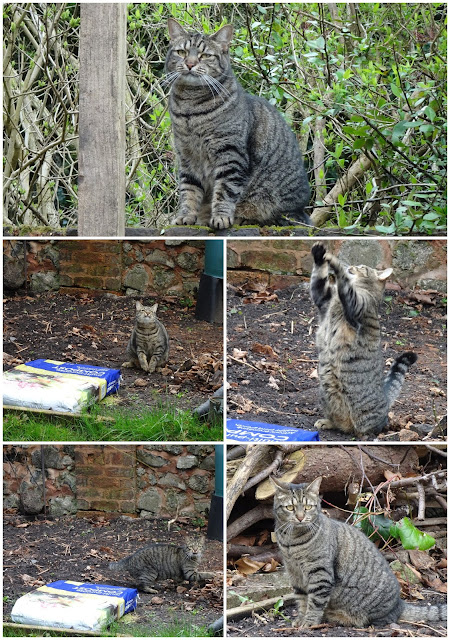 Despite the grey skies, it was dry which meant another day in the garden, Kitty from next door had the same idea. Jon moved the third of the raised beds we'd collected a couple of weeks ago whilst I potted up some of the bamboo & and moved it to beside the pond. Jon moved a couple of clumps to fill the gaps in the hedge - we've no problem if that area gets taken over by the stuff. 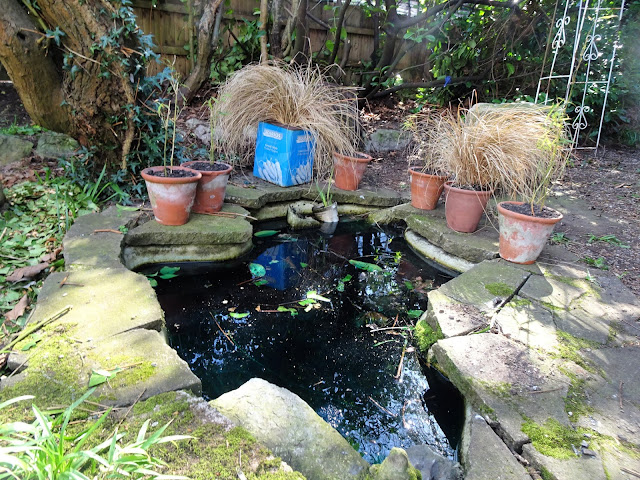 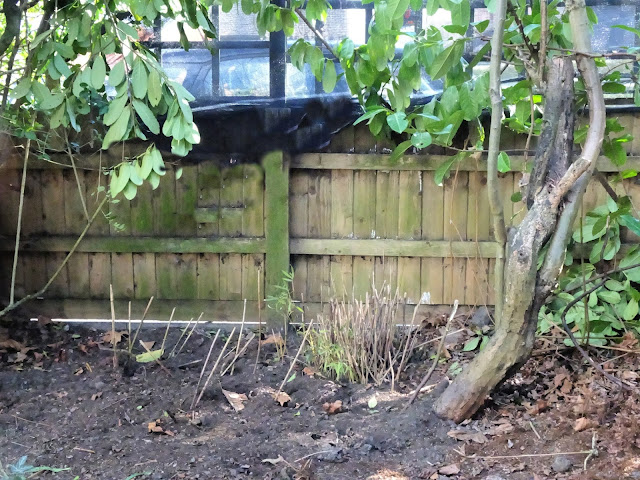 While Jon mulched between the raised beds and filled them with compost I raked over the bed in front of the wood store and the leaves piled up beside the compost bin. 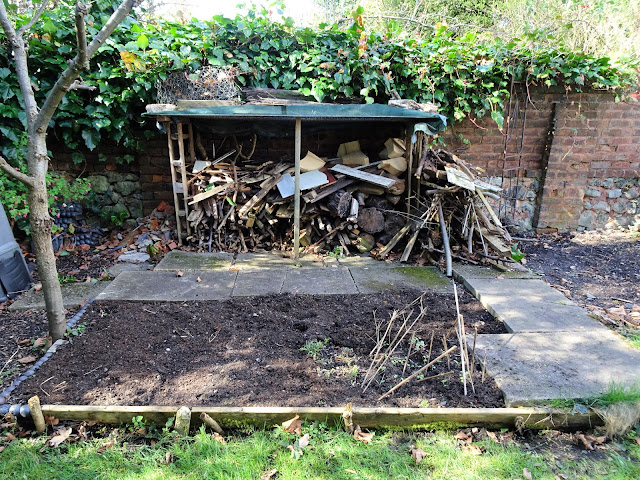 Jon had planted an array of seeds he'd collected every time we were out last summer and they had all sprouted, we moved these into the cleared bed. 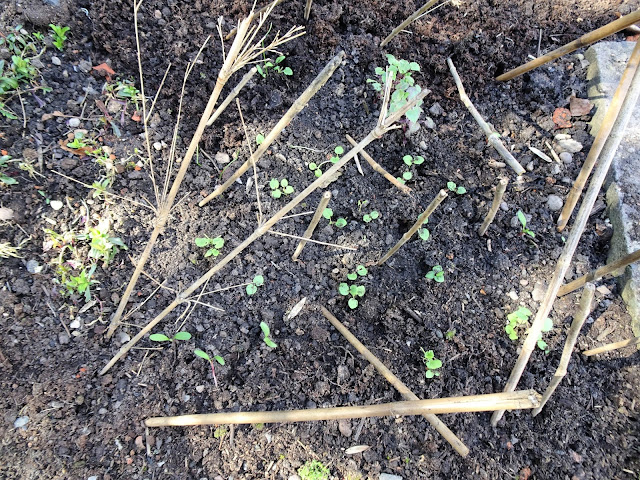 I wonder what they are? 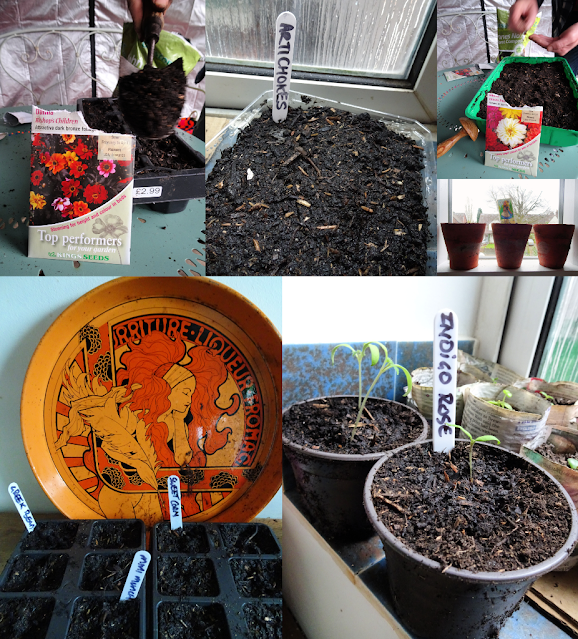 After a break for noodles, we planted sunflowers, dahlias, sweetcorn, mini munch cucumbers, more Greek beans and potted up the tomato seedlings. I then did a litter pick of the avenue (and our hedge). A man waiting for a friend told me how much he loved the craftivism sign hanging from the gate. He lives in a house by the Arboretum, Walsall's largest park, and on just one day last week his wife picked up 13 discarded bags of dog sh*t from their front garden. I realised after he'd gone that I should have given him one of my signs. Isn't hindsight a wonderful thing? 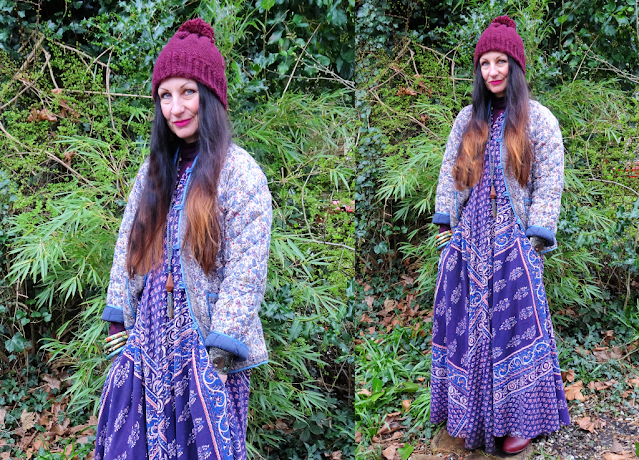 My new-to-me quilted jacket is the perfect gardening attire and I was more than happy to wear it again as part of my Wear:Sleep: Repeat challenge, this time over one of my vintage block printed kaftans (from Old's Cool Traders), a me-made hat and my embroidered polo neck from East. 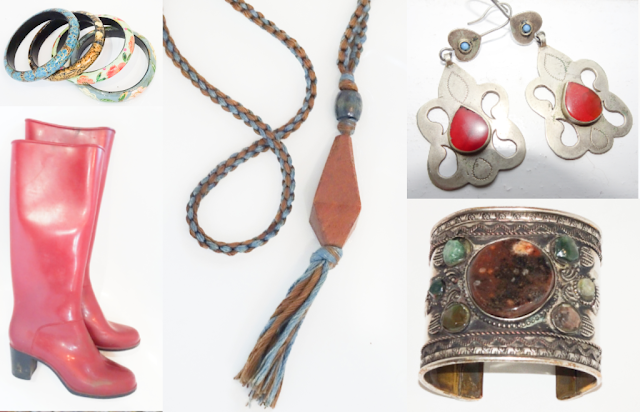 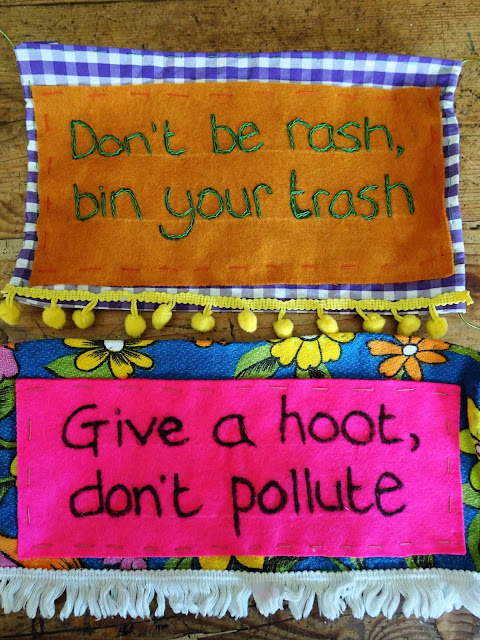 Whilst Jon worked on his music I made another couple of banners. I can't take the credit for the words, Cozy Cottage in California left me some fantastic anti-littering quotes in her comments last week. If you feel inspired to make your own, I recommend half a square of craft felt (I bought mine from this eBay seller), writing your message in indelible marker pen and then chaining stitch over the top. I then stitch the felt to a strip of fabric which I hem and thread with gardening wire, leaving the ends long enough to tie around railings or lamp posts. 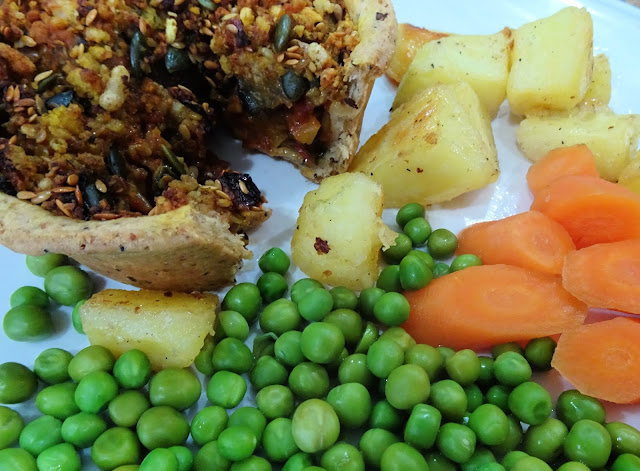 Tea was an aubergine & spinach masala Higgety Pie Tony had bought me, accompanied by with some veg. Later we watched another Walking The Dead and episode two of Line of Duty, as always it was stupendously good. 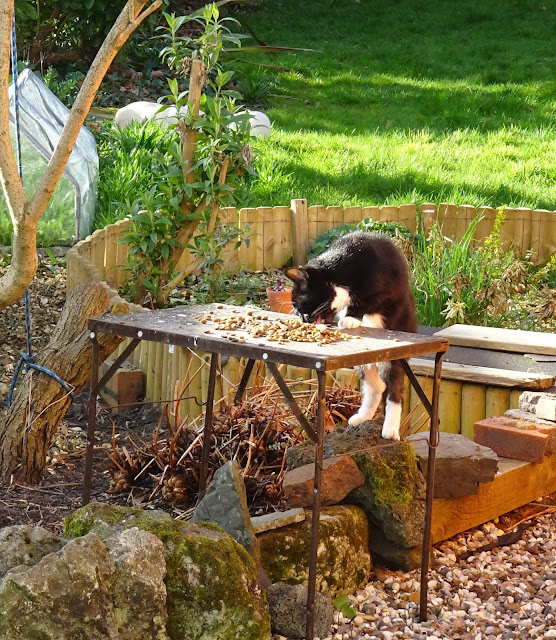 Gah! It was still dark when I got up on Monday morning, bloody clocks! My first task of the day is always to scrub out the cat bowls and fill them with fresh food & water and yet the lads go straight outside and gobble up the stale cat biscuits left out for the birds. 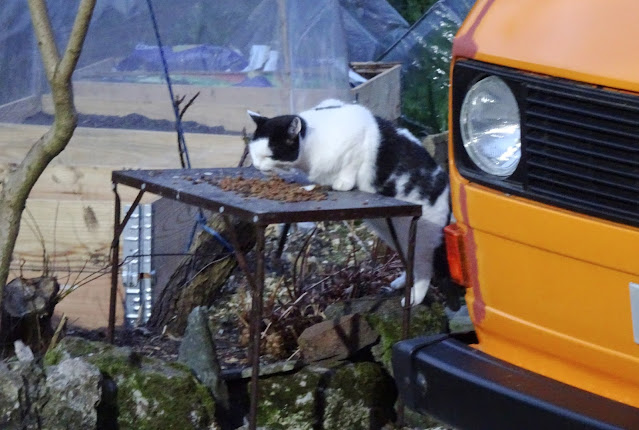 After my Wii Fit workout, I wrapped the last of the eBay parcels and joined Jon in the kitchen for breakfast. After the dismally cold weekend, we'd been promised a mini-heatwave for the early part of the week and Jacob was already creaking around the lounge keen to get into the sunshine. 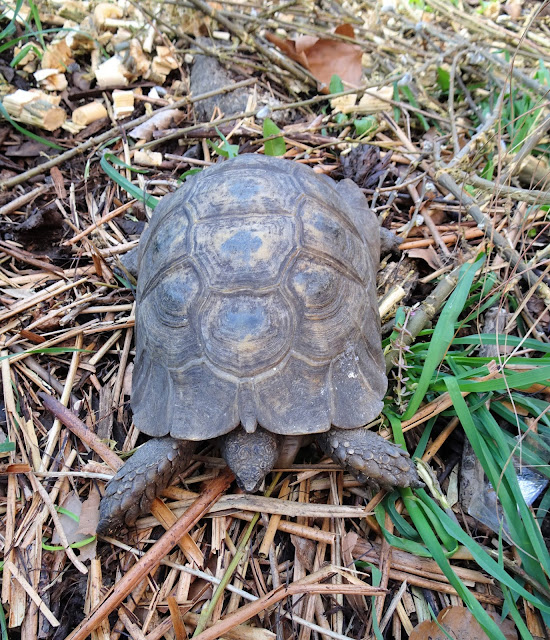 While Jon was doing the post office and supermarket run I sat outside and finished A Woman In Berlin, which was astonishingly good despite the harrowing subject matter. I've never read a war diary like it. 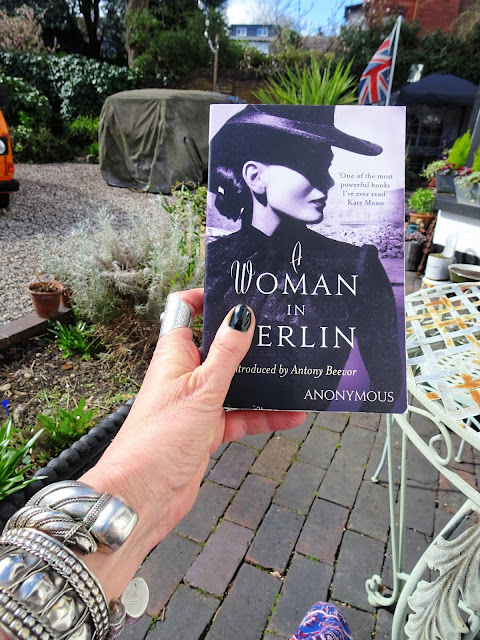 After our lunchtime noodles, we'd planned on an outing to the tip but Jon checked the live feed and the queues were insane so we decided to mulch another pile of branches, yielding four containerfuls which we spread around the garden. 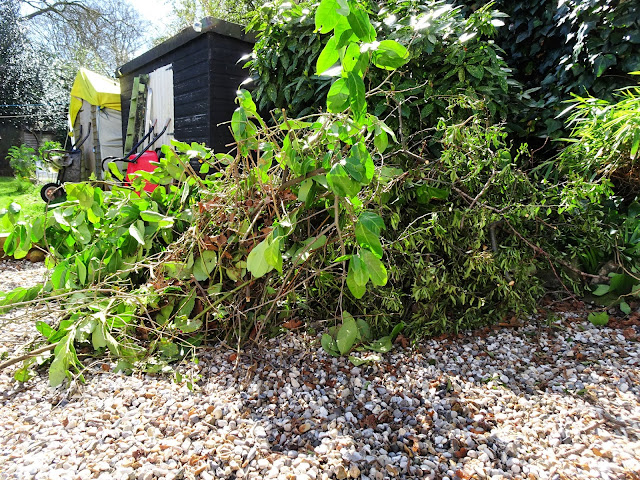 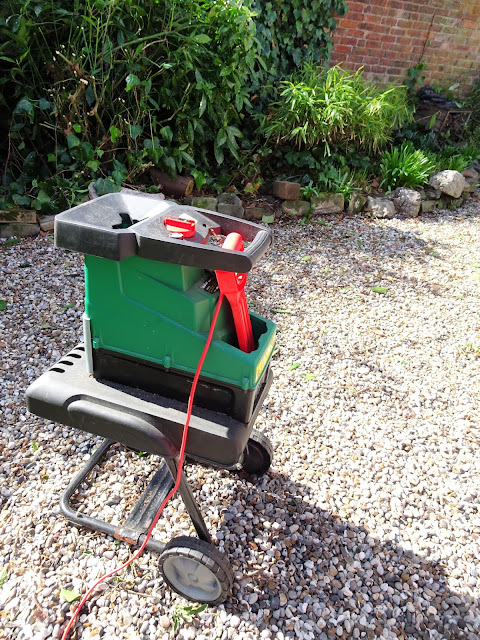 We went for a walk around the block, hung our craftivism banners and were pleased to see that the McD's trash that had blighted Saturday's stroll was being picked up by another litter collector. 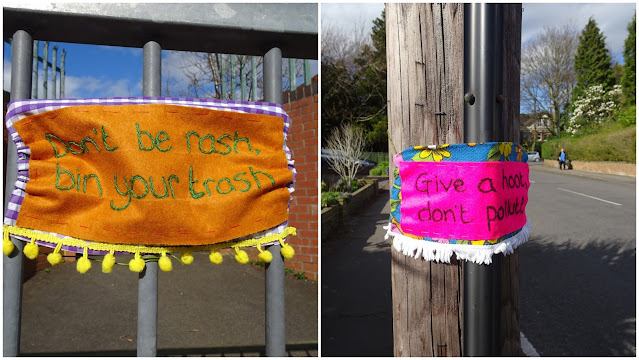 I wasn't sure if it would be the polo neck or the kaftan I'd be rewearing today but the forecast was spot on and it was the latter that got given the Wear:Sleep: Repeat treatment. This time worn with a vintage quilted Phool waistcoat & some vintage sunglasses. 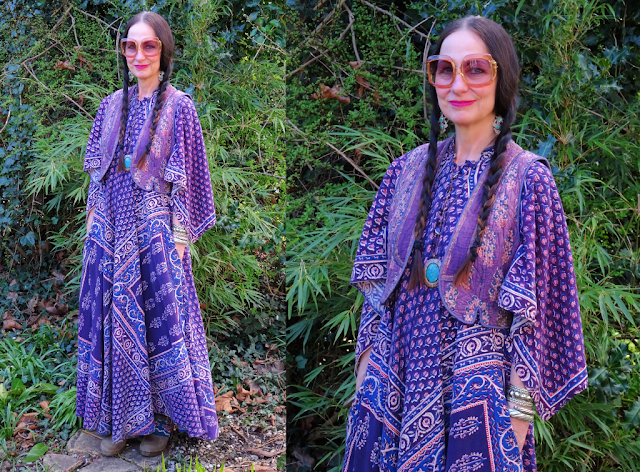 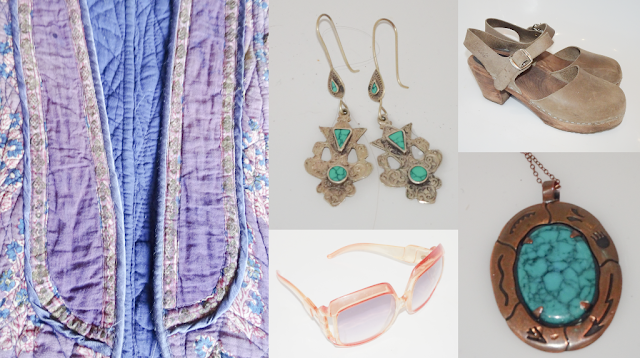 Tea was halloumi with roasted veg, a glass of wine & lashings of Henderson's Relish which until Allie Jane mentioned it, I'd never been aware of this veggie alternative to Worcester sauce (which contains anchovies). 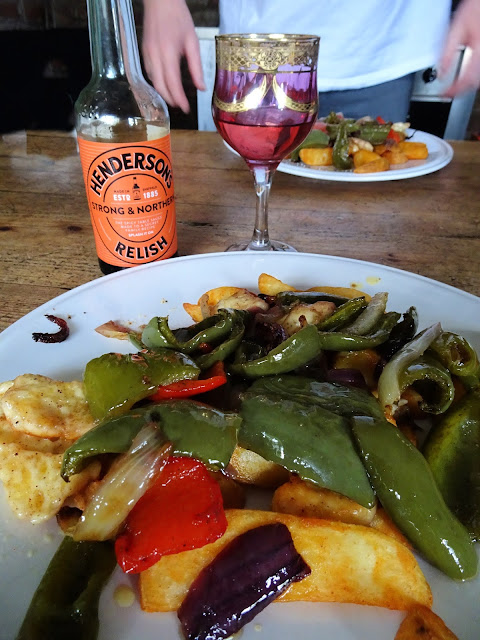 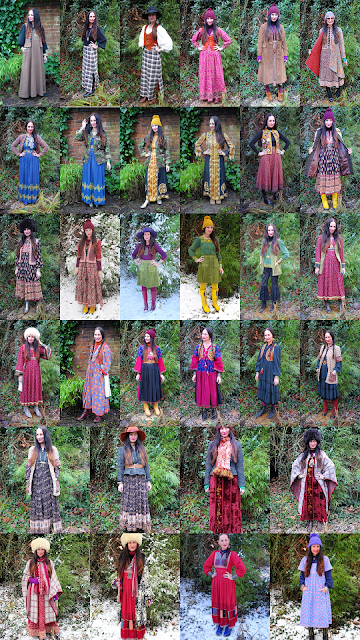 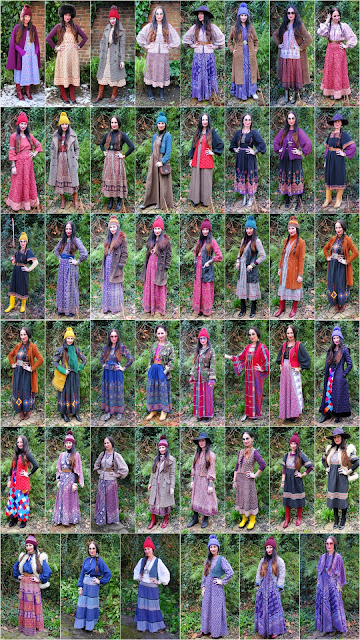 It's Liz and Adrian's birthdays! Liz & Al are on their way round as I type (it's legal to have friends visit your garden as of today) and we're visiting Liz & Adrian at the weekend. Must dash!
Stay safe & enjoy the sunshine!
Posted by Vix at Monday, March 29, 2021