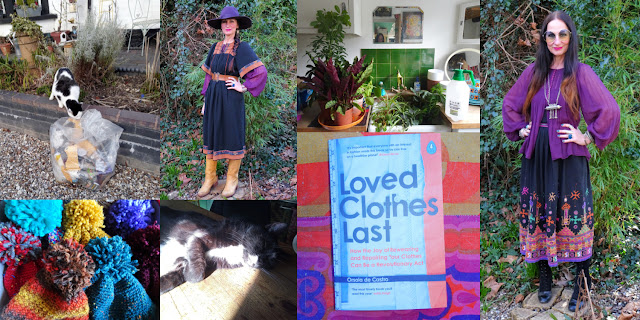 As forecast there was a heavy frost on Friday morning and after a quick lap of the garden the lads were soon snuggled back in bed. I put away the previous day's laundry, did the final Wii Fit workout of the week and, as it's now light before 7am, popped the free books back outside and did an impromptu litter pick of the avenue in my exercise gear. 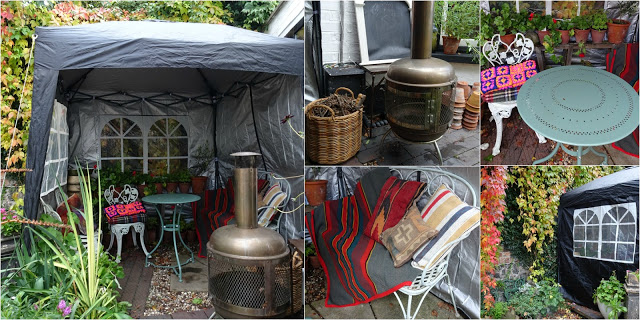 After breakfast I wrapped the last of the ebay purchases and Jon popped them round to the post office, calling at the supermarket for supplies on the way back. Meanwhile I took everything out of the garden shelter, weeded between the paving slabs and swept up the leaves. It's now ready for visitors when restrictions for entertaining friends in our gardens are lifted on - hopefully - 29th March. Eagle-eyed readers will see that a couple of my photos are from the Autumn, no flowering geraniums just yet! 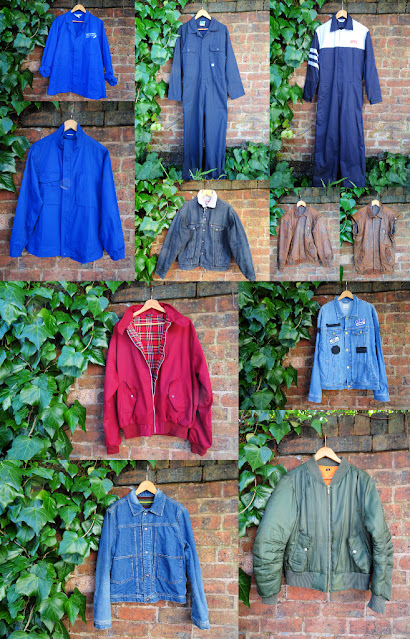 Jon arrived back as I was taking stock photos of more menswear, a mix of workwear and casual jackets. Remember those antiqued leather flying jackets with the zip off sleeves? They were all the rage in the early 1980s. 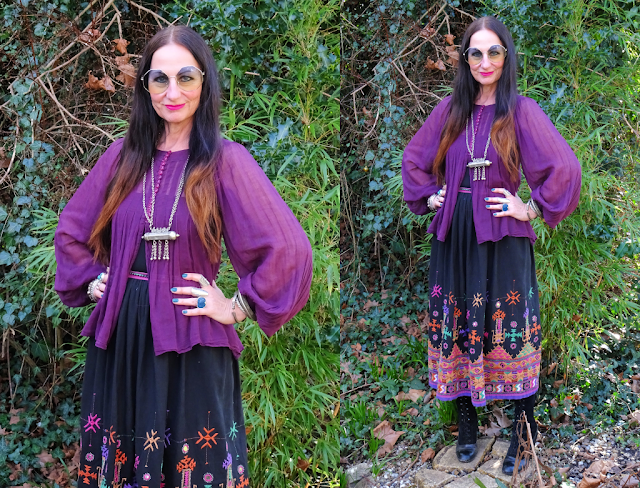 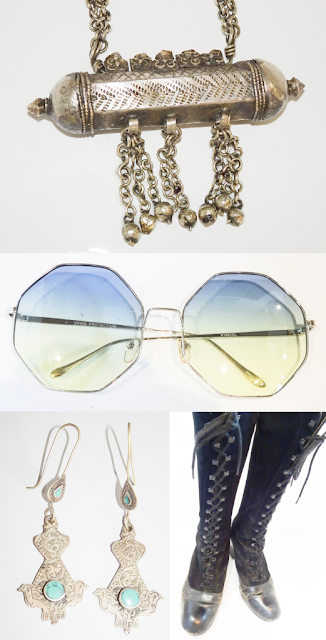 Jeff Banks' W1 range is another iconic British Boutique label. Jeff Banks, who Brits of a certain age will remember as the affable presenter of The Clothes Show in the 1980s (I met him and he was lovely), founded the Clobber boutique with his business partner, Tony Harley in 1964 where they stocked clothes by such illustrious designers as Ossie Clark, Janice Wainwright and Jean Muir. The shop was the forerunner of Biba and ran out of stock so frequently that Jeff Banks, acting as designer and working with Freda Fairway, who had made clothes for both Mary Quant and Hardy Amies, launched the W1 label which was also stocked in department store Fenwicks in the 1960s and 1970s. 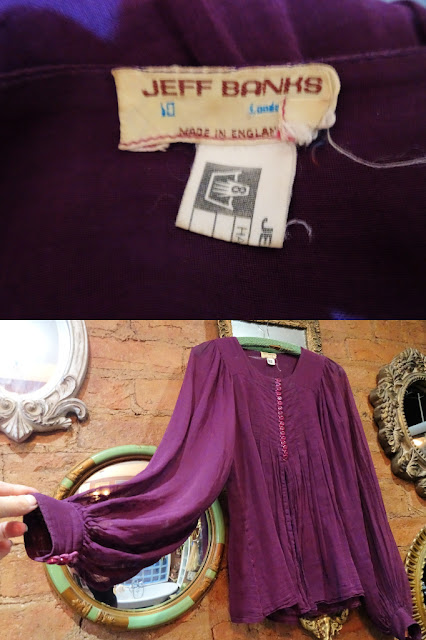 After uploading my stock to eBay and a break for noodles Jon and I went for a walk around the block, it was a gorgeous day but the temperature had reverted back from the balmy 17°C of the last couple of days to the more normal 8°C. I was glad of my pompom hat and scarf.

My lovely blogging friend Kezzie celebrates her 40th birthday next week and, as parties are illegal, she's hosting a virtual one instead. She's mad about Dr Who (she does a weekly cosplay, Tardis Tuesday) and has asked us to dress up in a themed outfit using clothes we have to hand. After some research I managed to pull an outfit together from my wardrobe and pose for a photo in readiness for the big day. 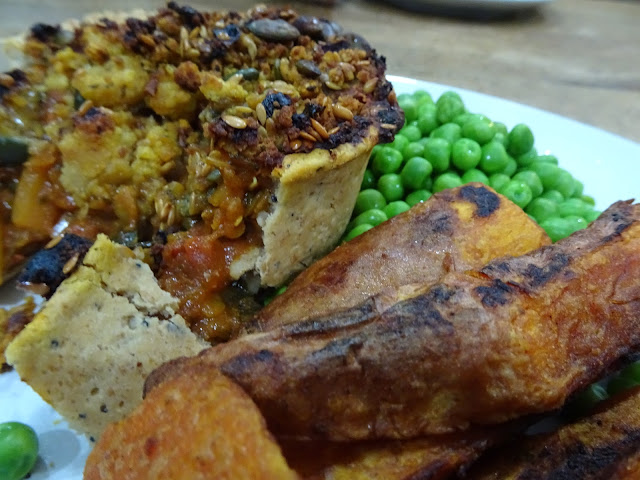 We watched the government press conference, discovering that us over-50s should have our first vaccine by 15th April. Tea was a delicious Higgidy aubergine & spinach masala pie Tony had treated me to (he and Jon are still doing doorstep grocery exchanges).

Later, fuelled by a few rum & colas, we watched the first episode of the new series of Unforgotten and a couple more of the I Can't Get You Out of My Head documentaries and both got up in the night to gaze on the beautiful Snow moon. 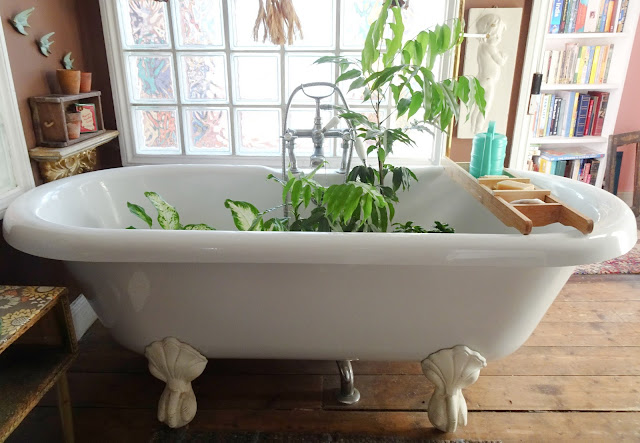 On Saturday morning Jon made tea & brought it back to bed where we lay and read until 8.30am. After he'd had gone downstairs I stripped and changed the bed, put away the plants I'd left soaking in the bath overnight and cleaned the bathroom. 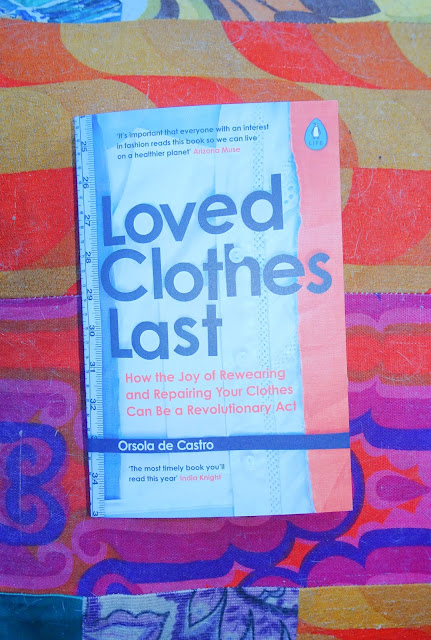 Richard arrived with the post which included this book I'd bought from The Guardian Bookshop. I'd read a glowing review online the other day and when my friend Elaine posted a link to an interview with the author, the co-founder of Fashion Revolution, Orsola de Castro, I decided to treat myself. 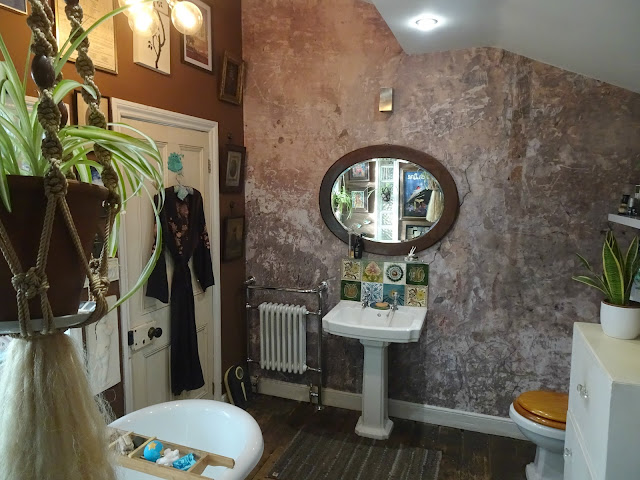 By the time I'd loaded the washing machine the veggie sausage sandwiches were ready. It was another cold but gloriously sunny day and I'd intended to peg the laundry out on the line but halfway through, disaster struck and the dead tree we normally attach the washing line to snapped, catapulting the washing across the lawn, so the tumble drier and clothes airer got called into action instead. 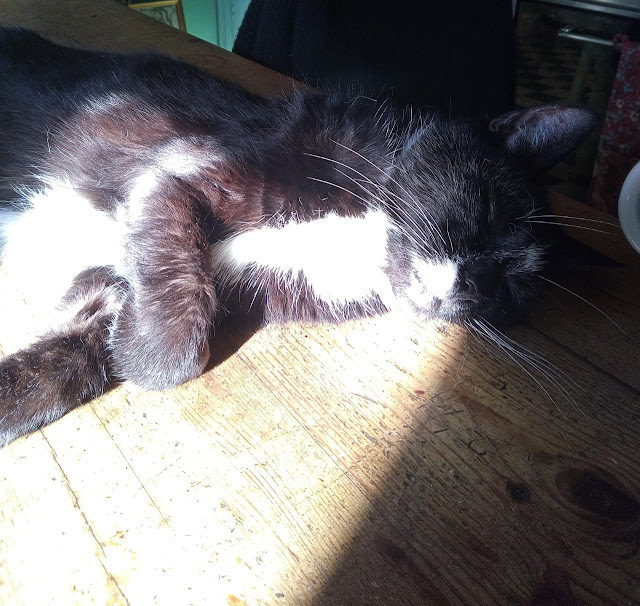 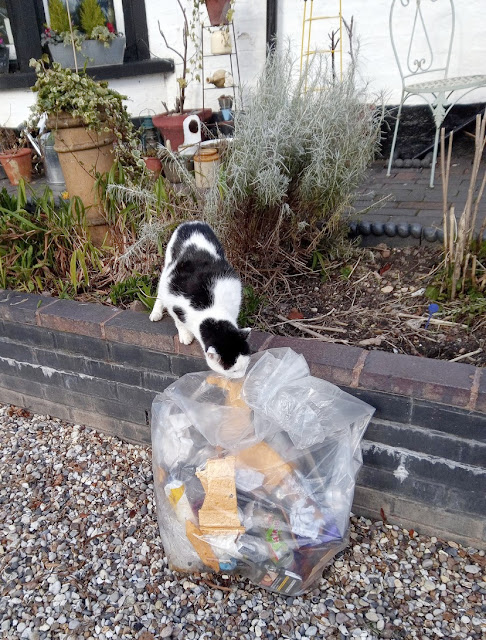 Although we've got a mammoth litter pick scheduled for Sunday, as we were walking around the block we just had to take a grab stick and plastic sack along with us. The disadvantage in living in a quiet part of town is that people drive here with their takeaways and throw the wrappers out of the car windows when they're done. The streets were awash this morning and Frank was very interested in the fish and chip wrappings when we got back. 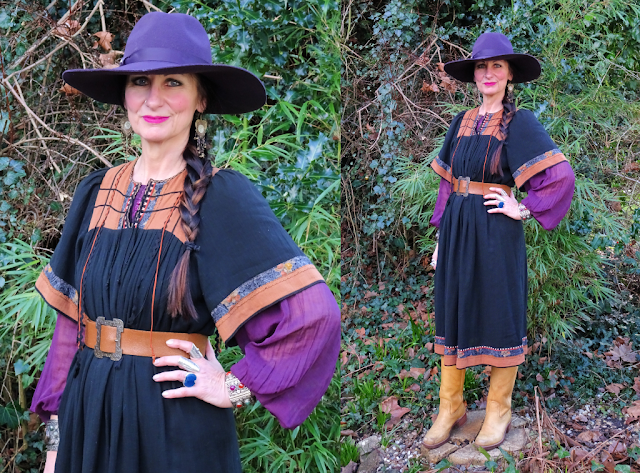 Wear:Sleep:Repeat saw me wearing Friday's Jeff Banks blouse, this time worn underneath my vintage Rumak cheesecloth dress to which I added a 1970s belt (both charity shop finds) and topped with the plum fedora I'd bought from Debenhams' sale back in 2019. 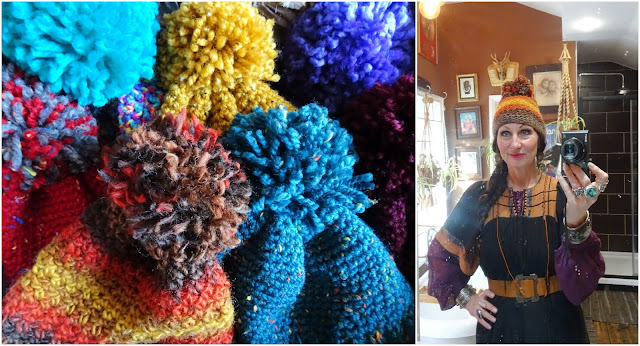 I decided to give myself a day off eBay listing, instead finishing the crochet I'd started earlier and, of course, it's another hat only this one is made with my newly acquired skill...tweed stitch. My new normal life consists of taking stock photos outside, going for walks and litter picking and hopefully, in the next few weeks, some gardening - I may as well have a good selection to chose from, minimalist I ain't! 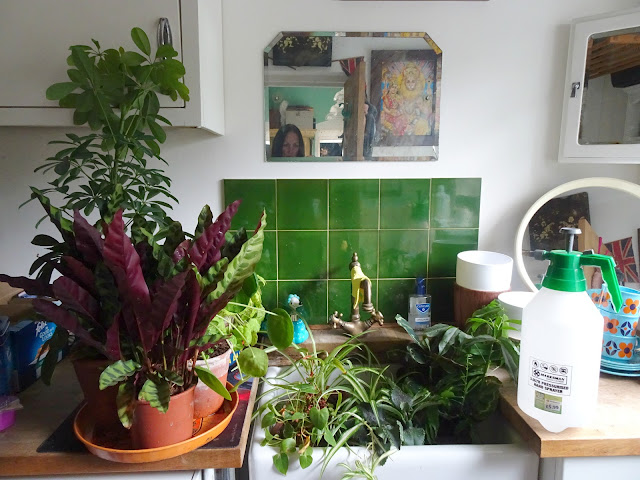 After getting the plants down from the used-to-be-a-coffee-table shelf and windowsill in the kitchen and putting them into the sink in the utility room to soak, I sat in the lounge and finished The Knife, popping it on Jon's side of the bed for him to read (he's also a Harry Hole fan) and searched the shelves for my next book. 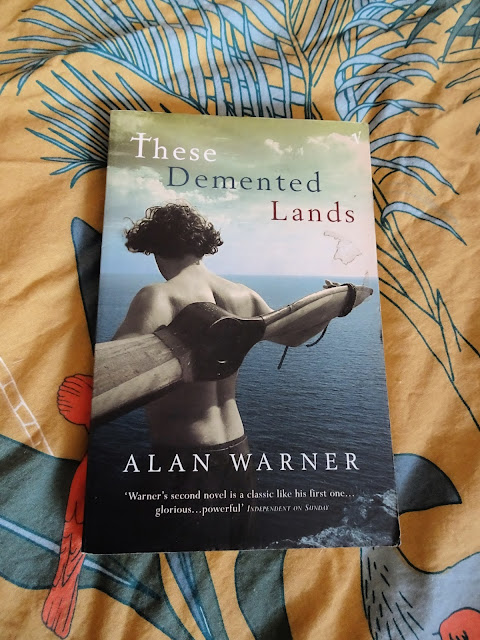 With darkness descending so quickly during the winter, self-care Saturday had fallen by the wayside , instead I've grabbed the odd ten minutes here and there to epilate my legs, strip off the nail paint and deep condition my hair. With Saturday's glorious sunshine streaming through the spare bedroom window I spent 40 minutes tending to myself before showering. 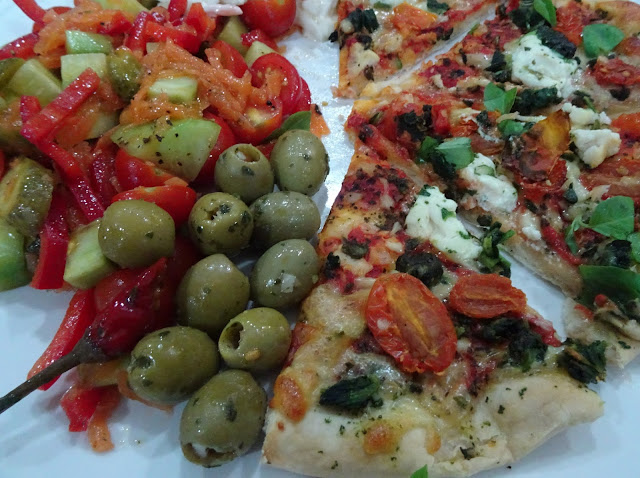 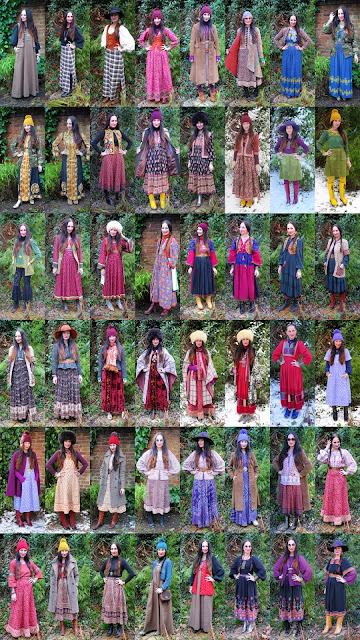 48 days of Wear:Sleep:Repeat squeezed into one collage!