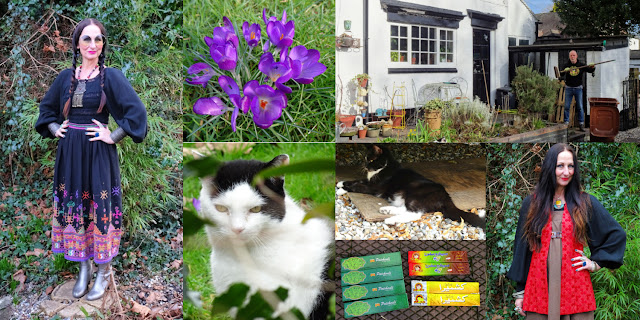 Wednesday got off to a gloomy, grey and drizzly start but, with temperatures well above the seasonal average, the lads had a fine old time looking for mice in the rockery whilst I did my Wii Fit. I did a bit of a blog catch-up before Jon came downstairs and joined me for breakfast. 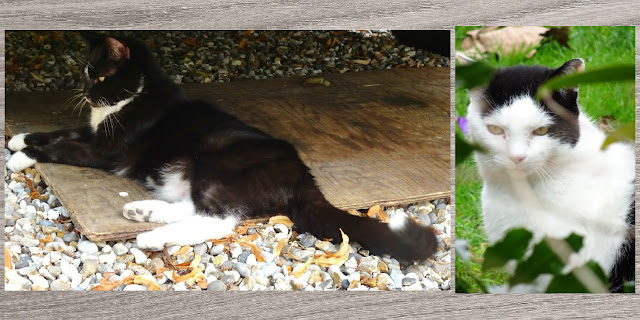 Although Jon's day for the post office run wasn't for another couple of days, I made a start on wrapping  our eBay sales to stop being overwhelmed on Friday morning. 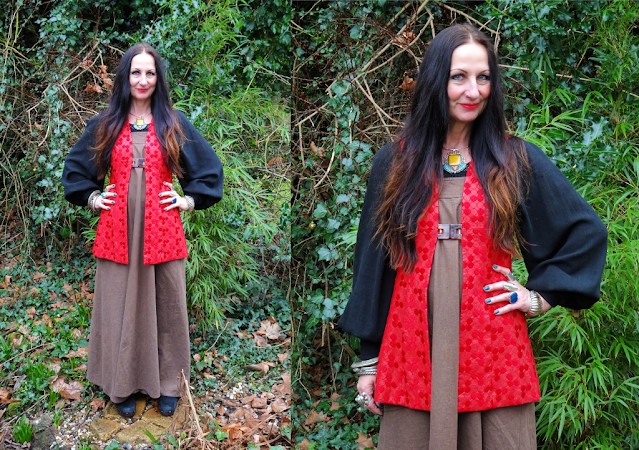 Wear:Sleep:Repeat saw the return of Tuesday's India Imports pinafore dress, this time worn with my vintage Ayesha Davar cheescloth blouse and a 1960s Annacat waistcoat I'd had for so long I'd almost forgotten I had.
Known as the Biba of Brompton Road, Annacat was formed in 1965 by good friends Jane Lyle and Maggie Keswick and was backed financially by fashion photographer Patrick Lichfield (the Queen's first cousin). Annacat was "in" with the swinging London scene of the 1960s who loved their historically-influenced sexy shapes and extravagant finishing touches and was also a firm favourite with British Vogue. In addition to their own line, Annacat offered pieces by other designers (including Lichfield) and was the first London outlet to stock Laura Ashley designs in the late 1960s. In 1968 a New York branch of Annacat opened on Madison Avenue, the label began designing for wholesale in 1970 but the venture failed to take off and led to Annacat's demise. 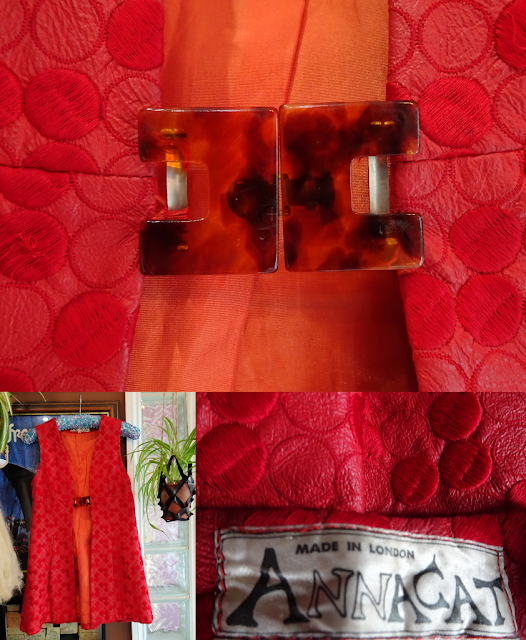 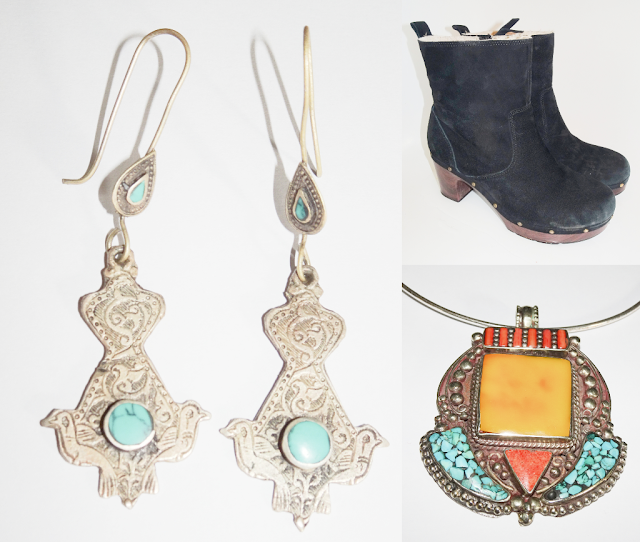 Due to the on-off rain it was another morning of kitchen photography. This time my stock theme was boots - I'm pretty sure that we haven't seen the last of winter yet. 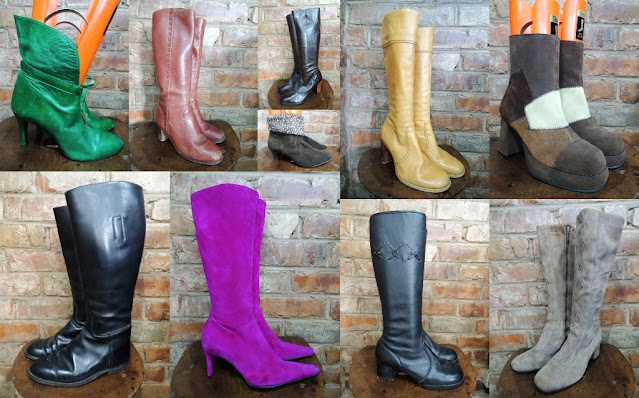 After a break for noodles I uploaded them to eBay, selling two pairs within 5 minutes! 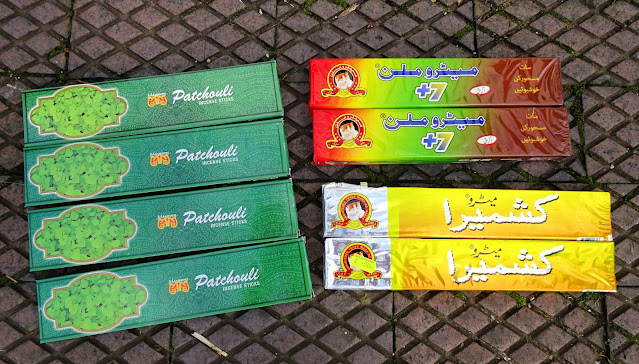 As the rain seemed to have stopped, Jon suggested we walk down to Johal's as we were running low on incense sticks. It was so mild that we didn't need coats (we'd even put Jacob in the garden earlier). I took my grab stick along and by the time we'd returned home I'd managed to fill a sack with litter including a box of used masks dumped in the middle of the road and a disassembled chainsaw. We got back to discover some skanky sod had left their McD****** wrappers on our drive. 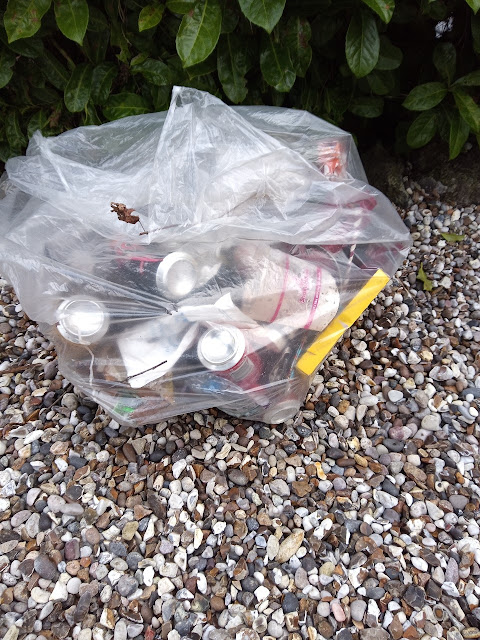 I spent the rest of the afternoon crocheting - only to take it apart as I wasn't happy with the finished result but my time wasn't wasted as I'd mastered the tweed stitch. 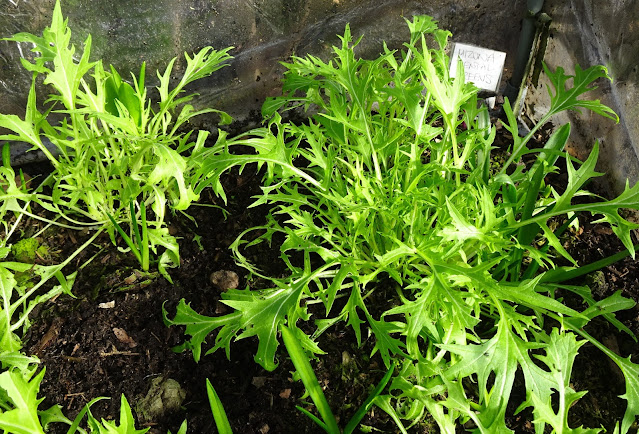 Tea was pizza with salad including some Mizuna salad greens we'd planted in the cloches before we went to Crete in September. Well worth growing, they're delicious. 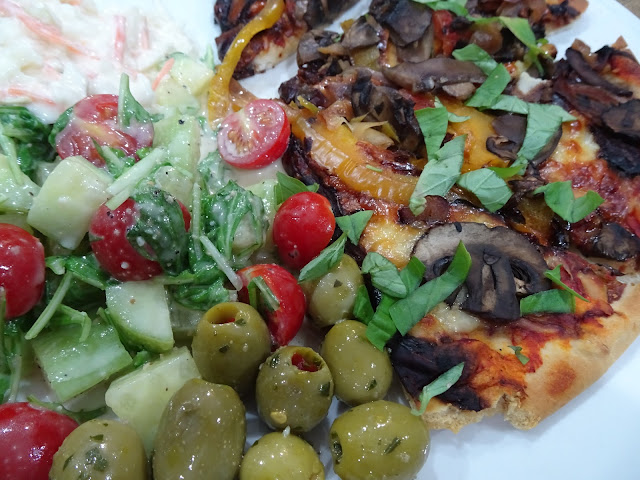 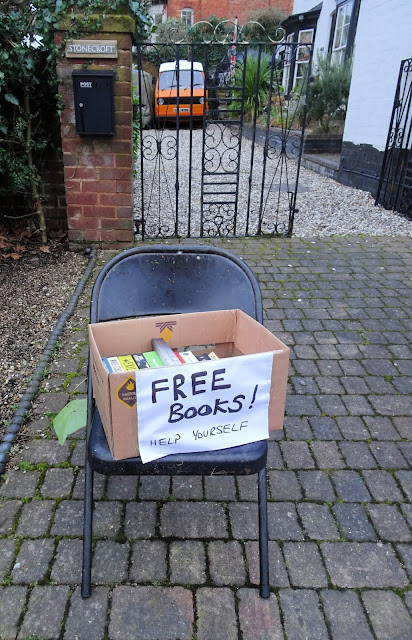 On Thursday it was bright enough to peg the washing out on the line at 7am. I did my Wii Fit workout, put out a box of books for passers-by to help themselves to and had just caught up with emails when Jon got up. After breakfast I wrapped up the overnight eBay sales ready for tomorrow's post office run. 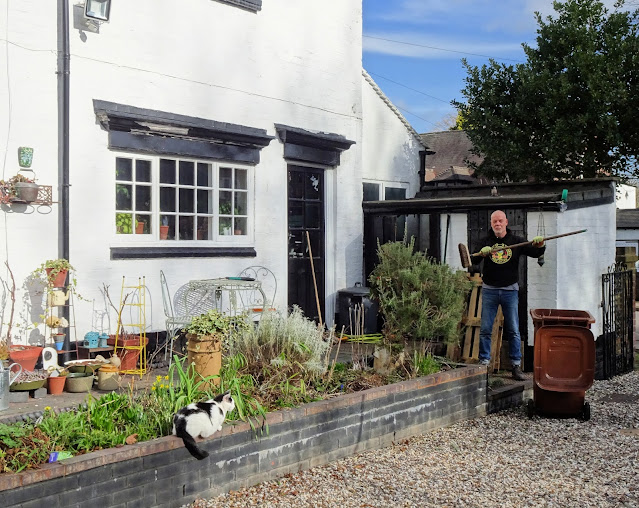 It was a gloriously sunny and warm day. Jon got stuck into tidying the garden and I took stock photos outside. With several festivals now announcing plans to go ahead, my theme for today's eBay menswear listings was Festival Staples. 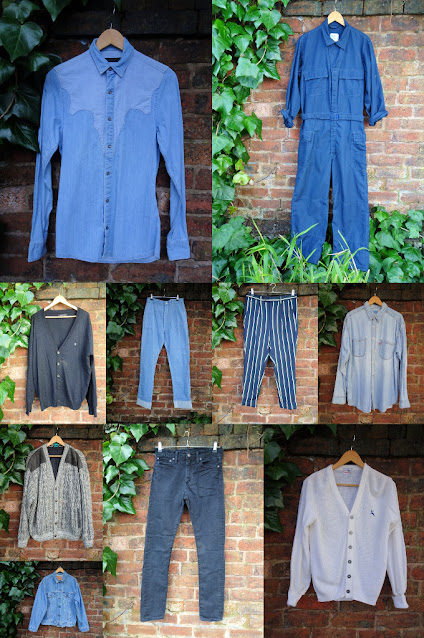 After a break for lunch - Baxter's Sri Lankan sweet potato soup (yum!) we both cracked on with our jobs. 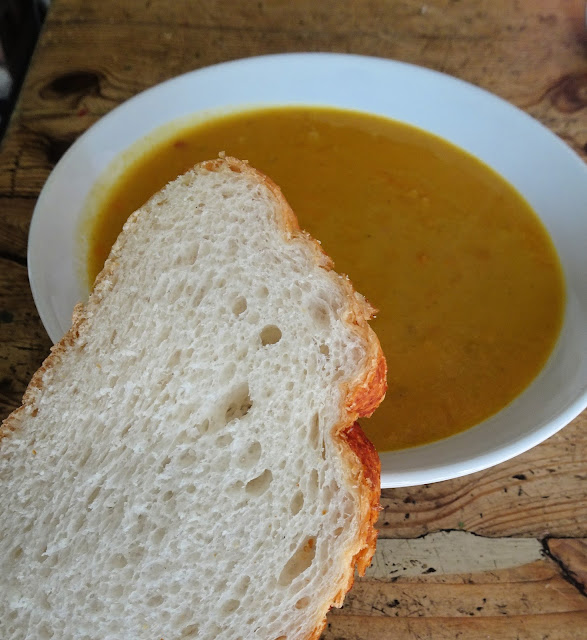 Wear:Sleep:Repeat saw the return of yesterday's Ayesha Davar blouse, worn with my new-to-me vintage Anokhi skirt I'd scored off eBay last week. I need to take the waist in but couldn't resist wearing it anyway, assisted by a couple of strategically placed safety pins. 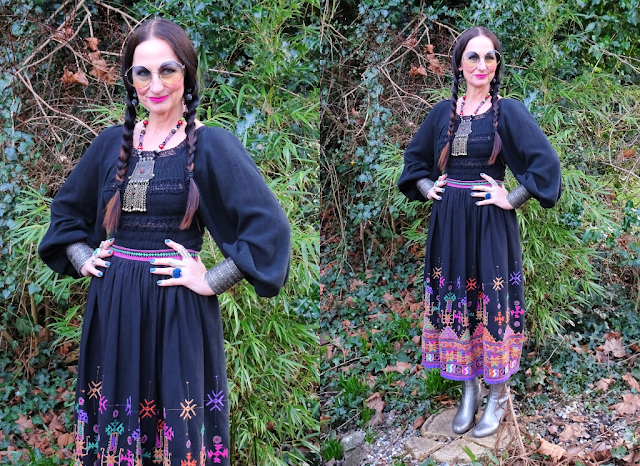 I've signed up for priority booking when my hair salon (hopefully) reopens on 12th April. After three professional trims last year I no longer get exasperated by my hair, now noticing the slightest change - one side grows a lot faster than the other hence the reason my left plait is almost an inch longer than the right. I could get Jon to level it off but I think I'll just sit tight and wait for six weeks instead. 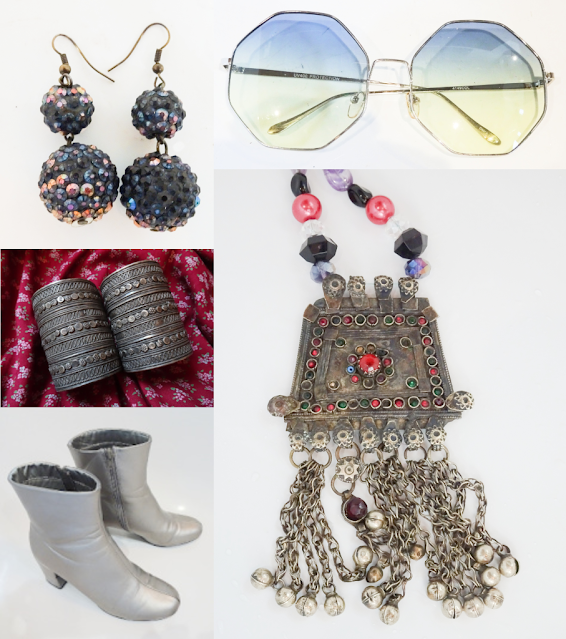 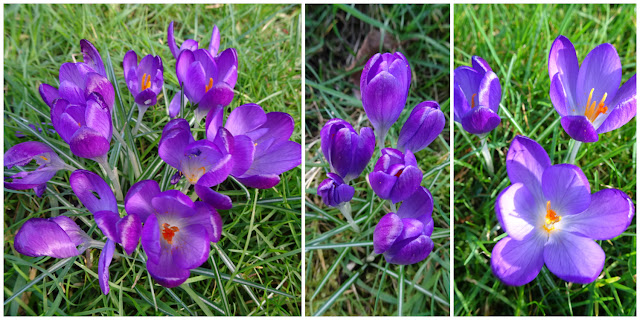 Is it just me or are the crocuses particularly plentiful and vibrant this year? Our lawn is full of them. 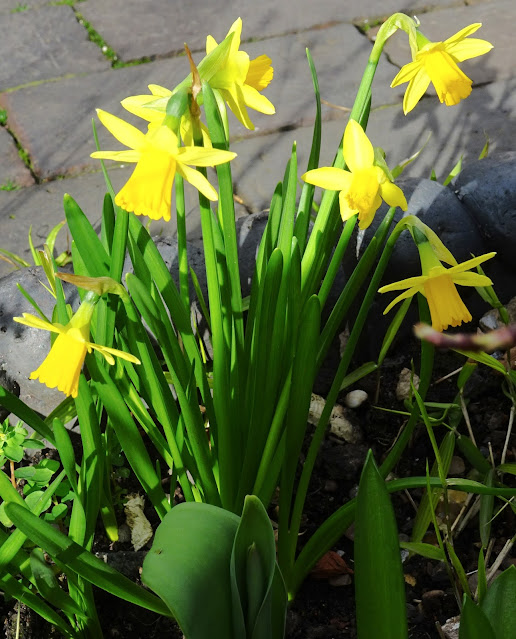 The daffs keep coming, there's signs of tulips, snakes head frittileries and alliums, too. I even spotted an occupied nest up in the London plane tree when I was getting the washing (and tortoise) in. 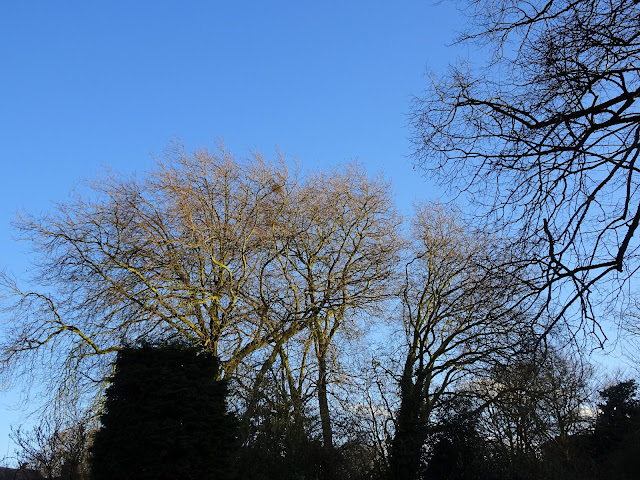 I'm not getting too excited though, we've got minus temperatures and frost forecast for later. 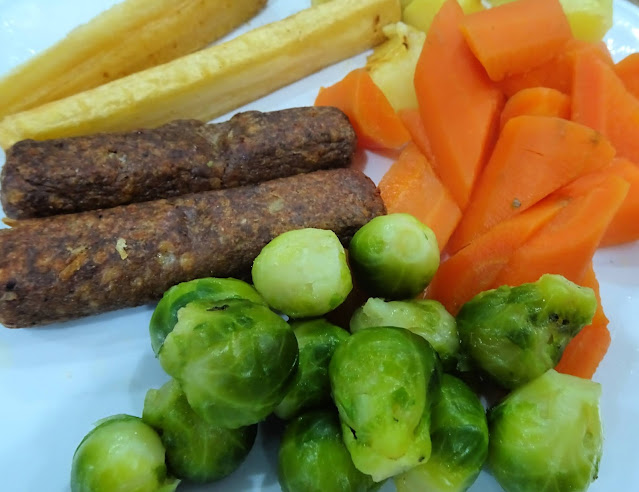 Tea was veggie sausages, roast potatoes and parsnips, sprouts and carrots, accompanied by half a bottle of ale. We've got one episode of Deutschland 86 to watch before Deutschland 89 kicks off tomorrow night and then there's a choice of Adam Curtis's Can't Get You Out of My Head (which we still haven't got around to) or Janina Ramirez's Raiders of the Lost Past. 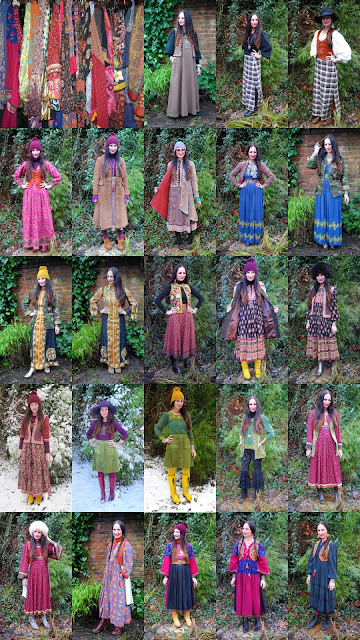 That's after I've decided which garment I'll be repeating tomorrow. 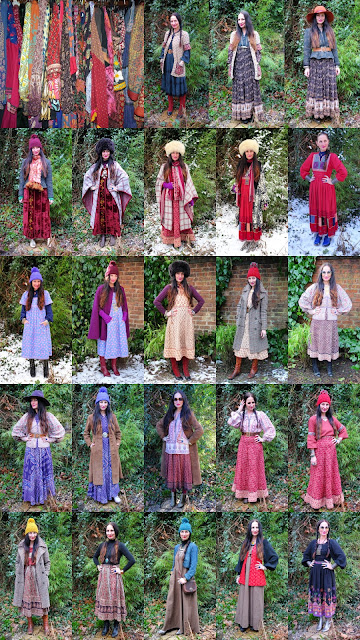 Stay fabulous and see you soon!
Posted by Vix at Thursday, February 25, 2021