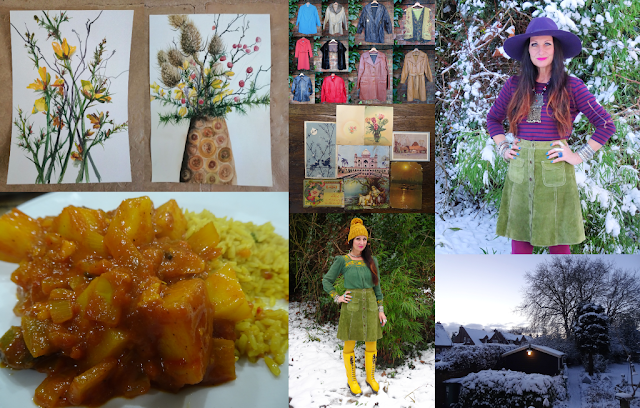 On Monday morning I was up just after 6am, I did my Wii Fit workout and left the lads to play in the snow, I tried to shut the front door behind them but it had frozen solid and jammed solid. I grabbed my wellies and made my way to the Kinky Shed but couldn't get inside, the padlock had also frozen. 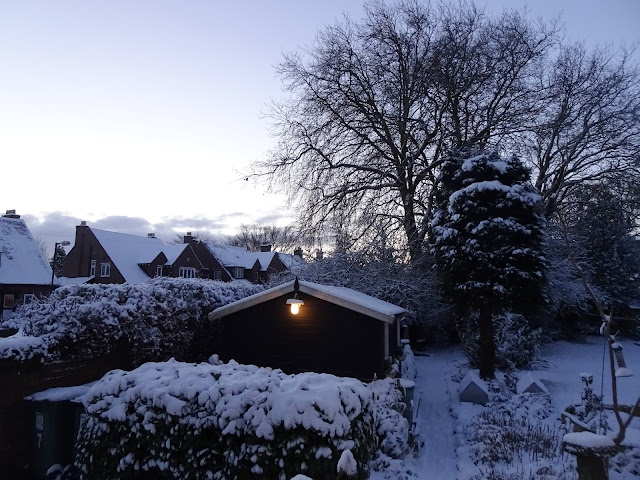 Too cold to sit at the PC and catch up with Blogland, I emptied and scrubbed the fridge inside and out, mopped the kitchen floor and swept the rugs in the middle room. By the time Jon got up and sorted out the front door I was toasty warm. After breakfast he attacked the shed padlock with boiling water and I was able to get in and wrap the rest of my parcels. 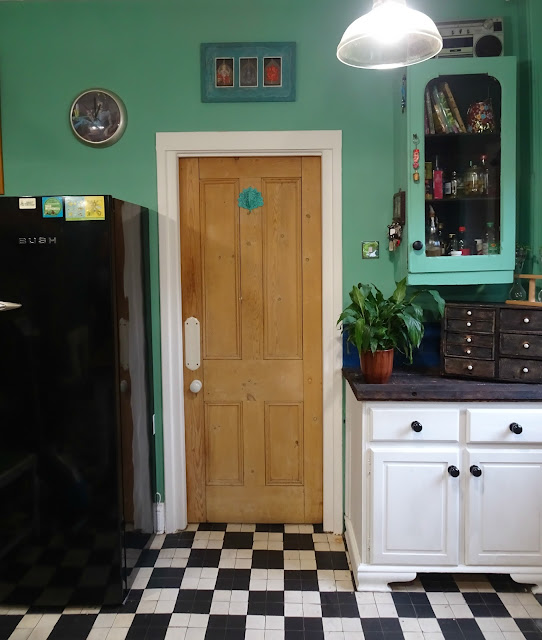 Jon did the weekly food shop and the Post Office run, returning to say that both were almost deserted. After sanitising and putting the shopping away I posed for an outfit photo in the snow. 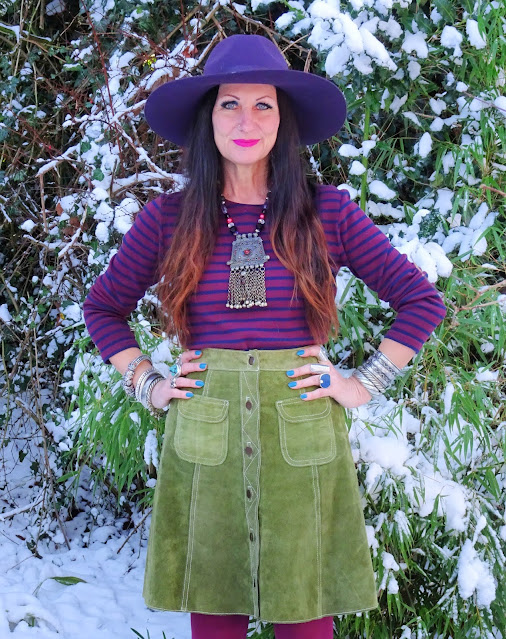 Wear:Sleep:Repeat! Sunday's Armor Lux Breton got another outing. It really is incredible quality cotton, so thick and cosy and, if you can't stretch to the retail price, they are definitely worth hunting down on eBay. This time I combined it with my 1970s Tarantella of Walsall sage green suede skirt (from friends G'n'T), British-made 80 denier aubergine tights (eBay) and my purple fedora (retail sale buy, 2019) 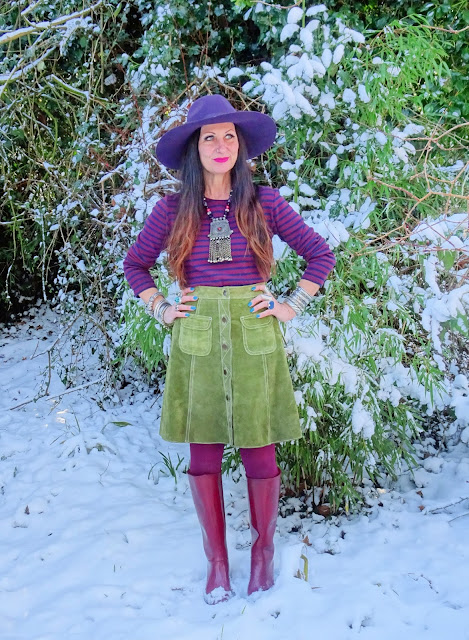 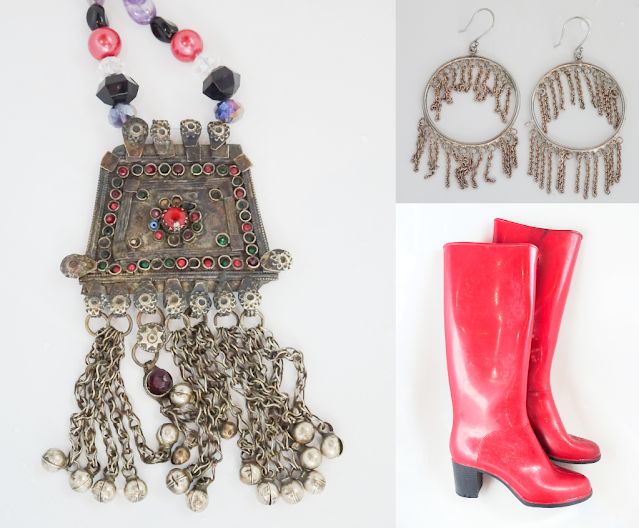 Remember the Winter bouquet Liz collected when we were out walking last week (HERE)? She emailed me to show me that she'd turned her findings into art already. 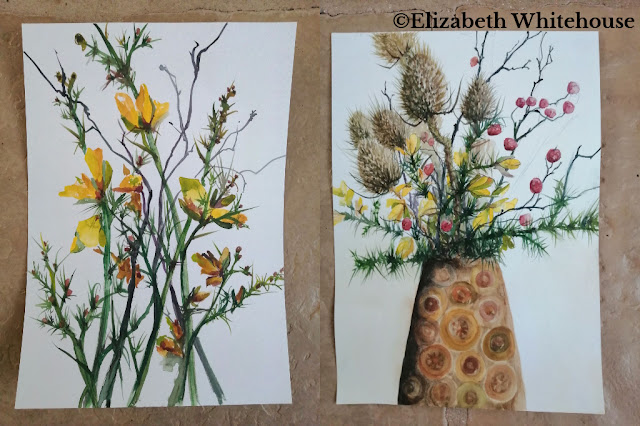 Wrapped in a cape and mittens, I endeavoured to take stock photos, easier said than done in Monday's sub-zero temperatures, I was struggling to operate the camera as I couldn't feel my fingers. 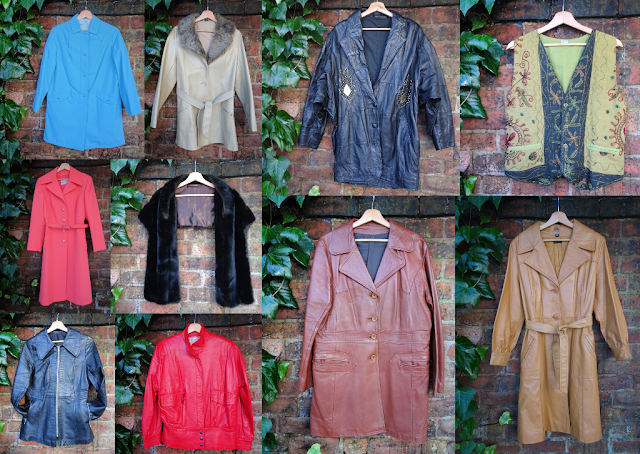 After a break for noodles I spent the rest of the afternoon measuring my garments and listing them. As Jon was waiting for a delivery I'd almost written off our daily walk but it arrived in the nick of time and we were able to go for a very slow walk around the block, picking our way through the snow and black ice. We got back at just after 4.30, incredulous that it was still light. We tucked into quiche and salad for tea. After a blog catch-up (me) and musical interlude (Jon) we met up in the lounge and started to watch the second series of  All The Sins (we're obsessed!) 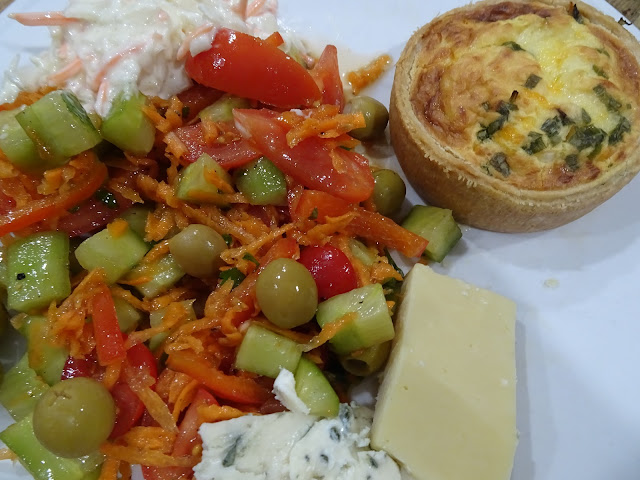 I'd forgotten to set my alarm on Tuesday but Frank's purring woke me up at 6.40 am. After my Wii Fit workout and breakfast I braved the black ice and ventured into the Kinky Shed for some stock. 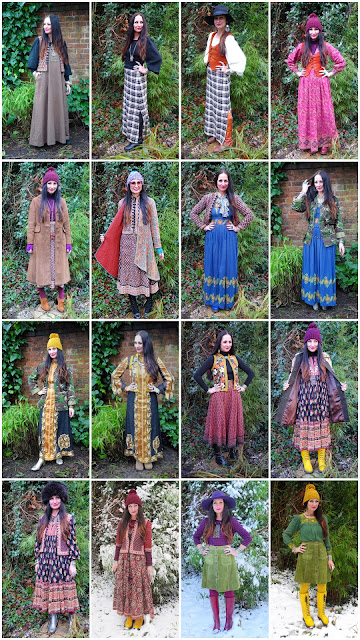 Wear:Sleep:Repeat continued. Just in case you're wondering it's my self-imposed challenge to rewear a garment from the previous day to create a different outfit. I've always said that if you only buy clothes you love they're almost guaranteed to go together. 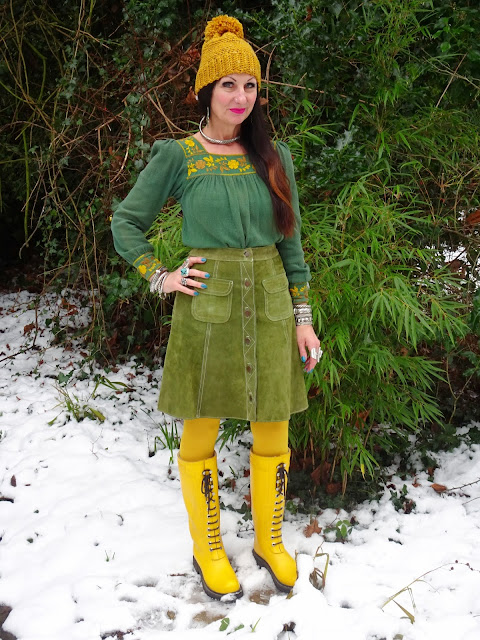 I'm wearing Monday's Tarantella of Walsall suede skirt, this time with a 1960s embroidered cheesecloth blouse made in India by Santos Fashions of London (eBay), my me-made Aran hat and some 100 denier mustard opaques I found in a charity shop years ago. They're originally Pr*mark and fit horribly but the colour is good. 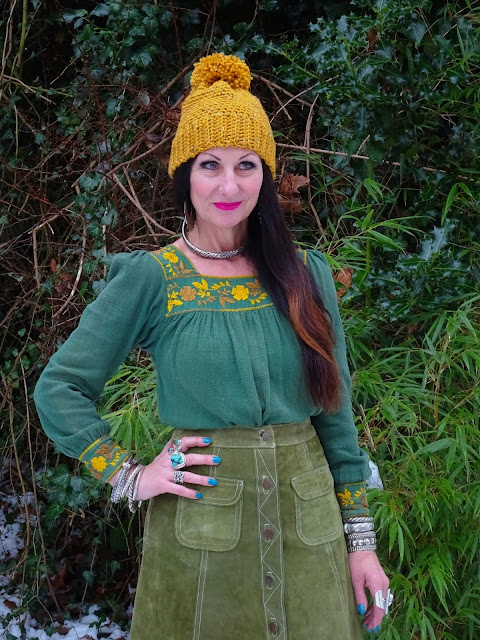 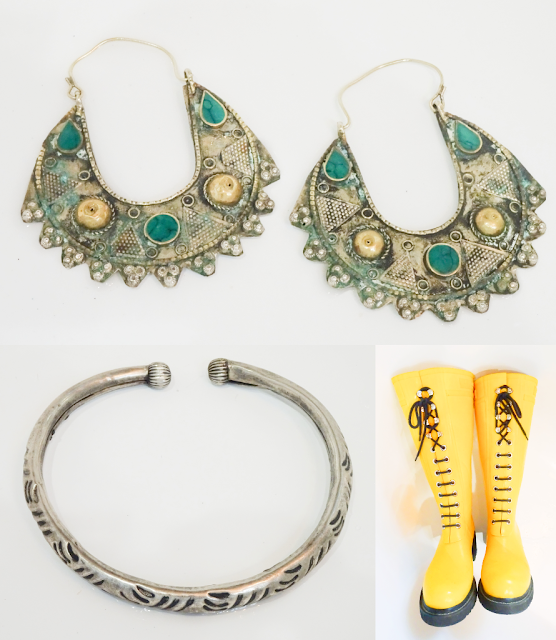 I'd had a couple of requests from repeat customers asking me to pose in stock they were interested in which I managed to do, just before the skies darkened and the sleet arrived. With outdoor photography plans scuppered I ironed and measured some more menswear and saved the descriptions to draft but after a break for noodles there was some let up in the weather and I was able to dash out and snap away. 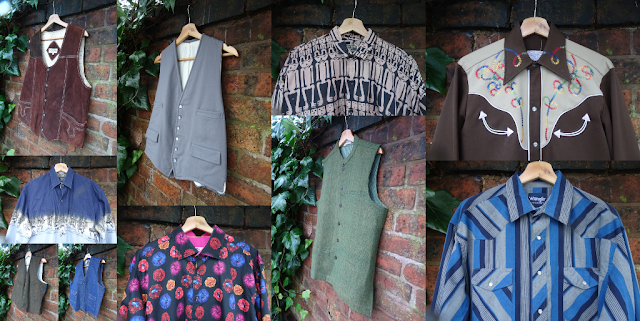 Whilst outside I checked the postbox and discovered my latest eBay buy, a collection of vintage Indian postcards the seller had found in their attic, with some dating back to the days of the Raj. Other than Lake Sringar in Kashmir we've visited all the places featured. The seller was kind enough to include a few freebies including some 1930s greeting cards featuring the most exquisite handwriting - £2 well spent! 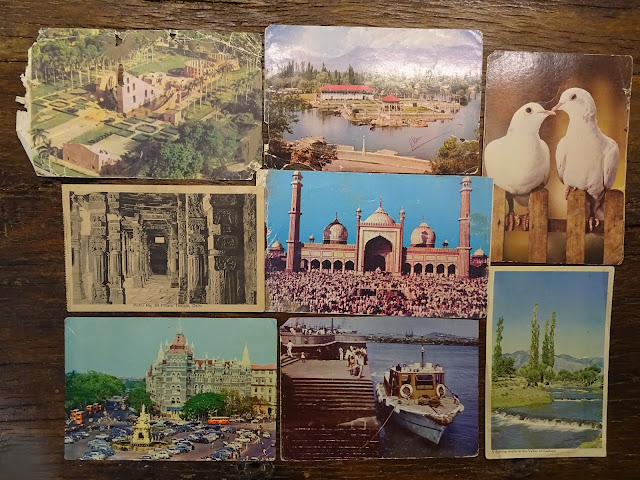 If the charity shops were open I'd be down there tomorrow rummaging for a suitable frame. As it is, it might be Easter before I can do anything with them! 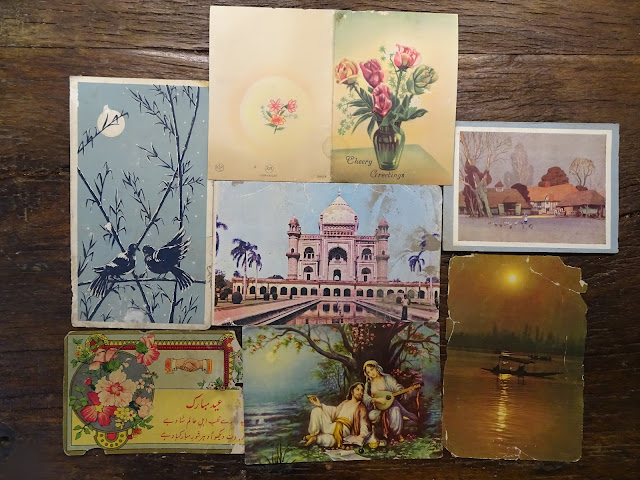 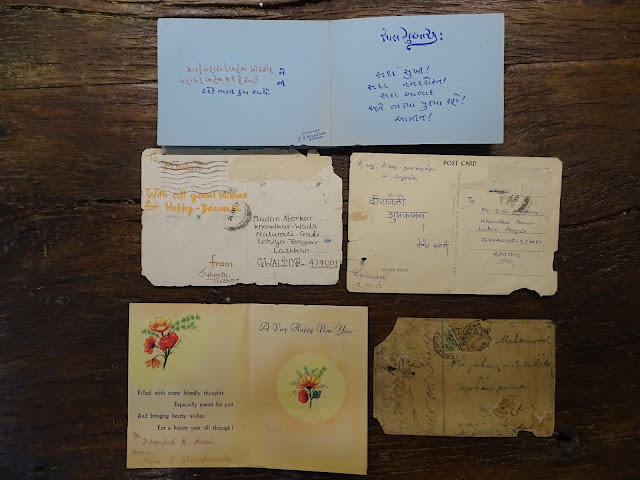 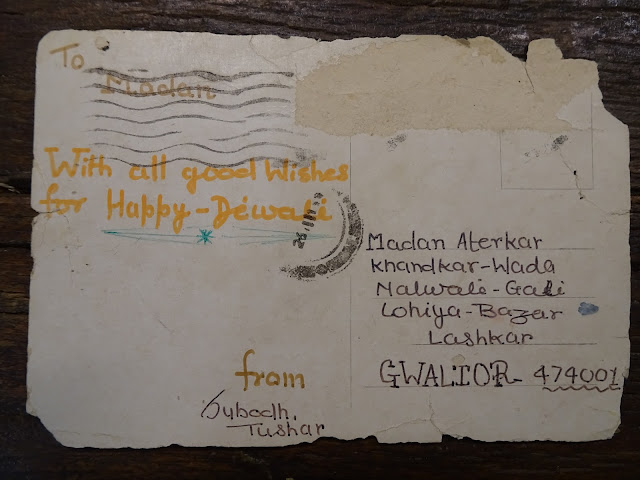 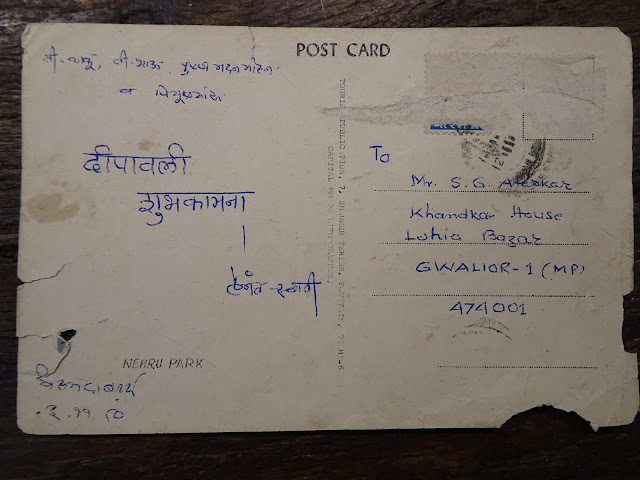 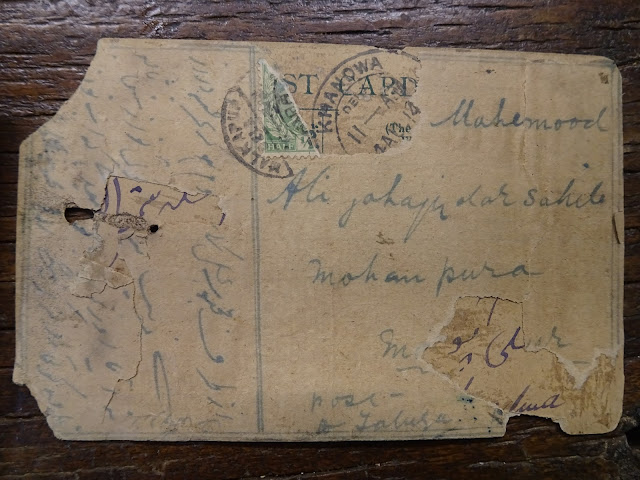 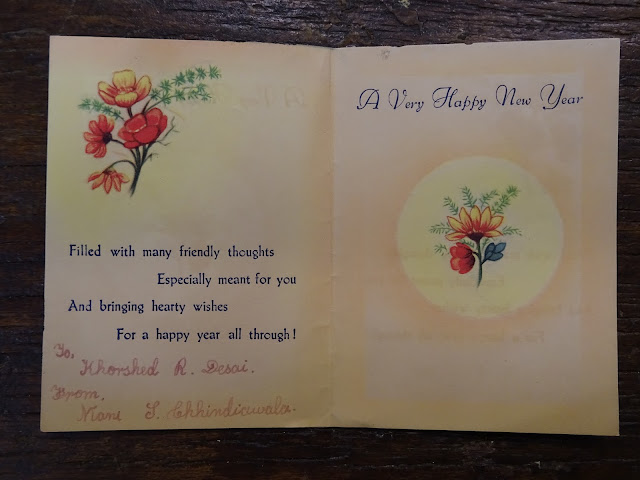 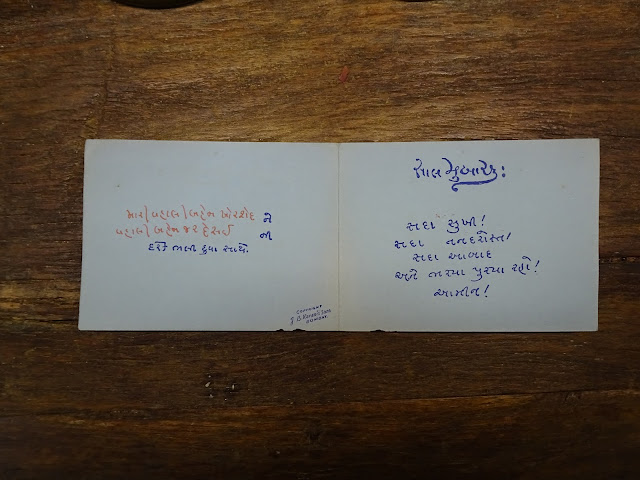 The stationery shop this 1930s card came from, JB Karani's and Sons, in the Fort area of Mumbai (known as Bombay back then) was established in 1898 is still run by the same family. We've walked past it many times! 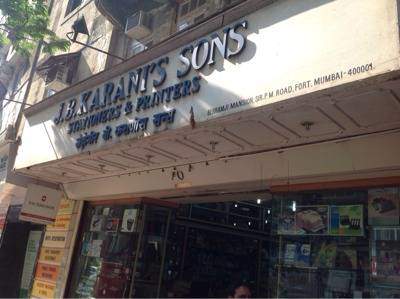 A few of you asked if I would share a few recipes so here's what we made for tonight's tea, Mushroom Potato Masala.
For two generous portions:
6 button mushrooms (roughly sliced)
2 medium potatoes (scrubbed, cubed & parboiled)
I medium onion (chopped)
Tin of chopped tomatoes
2" fresh ginger & 4 cloves garlic (whizzed together in a mixer to form a paste)
1/4 pint water
1/4 tsp turmeric powder
1 tsp chilli powder
1/2 tsp garam masala
3 cloves
1/2 tsp cinnamon
Salt (to taste)
3 tsp oil (we use rapeseed)
Coriander leaves
Heat oil in a large pan, add cloves and garlic ginger paste and saute
Add onion and saute till translucent
Add tomatoes, mushrooms, potato, salt and all the spices. Saute for 5 minutes
Add water and simmer until vegetables are cooked - add more water if you want a runnier curry.
Garnish with coriander leaves and serve however you like. 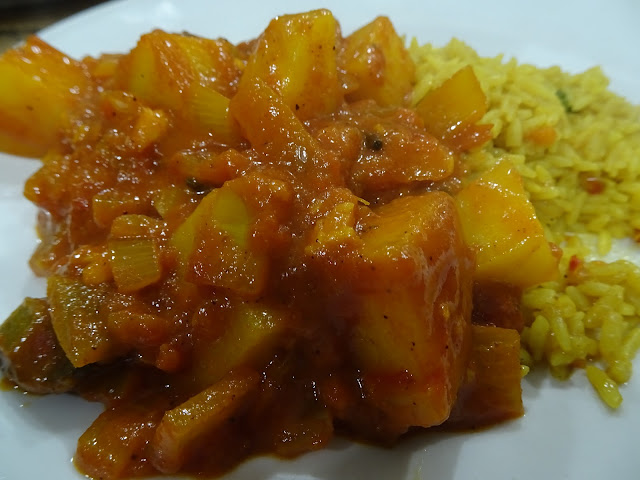 Our was accompanied by rice and a beer - we needed it after BoJo's press conference. Over 100,000 dead and yet there's still Covidiots convinced it's all a hoax.
Tonight we'll be watching more of All The Sins and looking forward to a hopefully snow-free walk tomorrow.
Stay safe and see you soon!
Posted by Vix at Tuesday, January 26, 2021