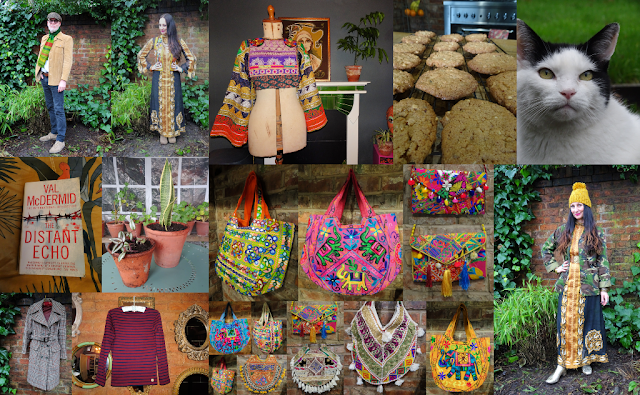 On Tuesday morning I did my Wii Fit workout, gave the rugs in the middle room a thorough going over with a stiff broom and cleaned the mantelpiece, which was filthy from the wood burner below. After our fruit and yogurt breakfast I resewed the hem on my quilted house dress and had a blog catch-up.

Jon's mission for the morning was to collect our friend Adrian's bike in our works van and drop it off at the bicycle repair shop for a service as it wouldn't fit in Adrian's sports car. Adrian followed him, in these Covid times one daren't risk passengers! Going somewhere different, no matter how mundane, offers a rare opportunity to dress up so he wore the 1970s Western-cut cord jacket he'd snaffled from the Kinky Shed the other day. 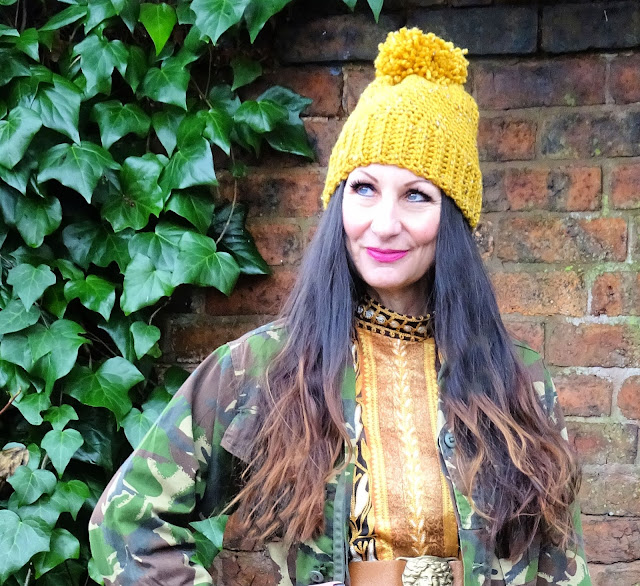 Meanwhile, my sartorial adventures in my Wear:Sleep:Repeat challenge meant I rewore Monday's vintage British army jacket over a 1960s Ayesha's embroidered cotton gauze kaftan (eBay), topped off with my me-made yellow Aran hat. I bet you thought I'd be wearing my Sarah Jane Adams tribute dress under the camo jacket, it was one of my choices but the kaftan won. 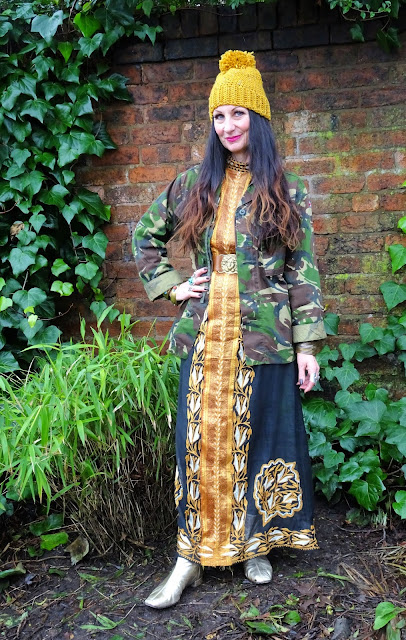 The details: Vintage brass & copper jewellery (inherited from my Mum), Topshop gold leather boots (reduced to £7 in their sale four years ago so I bought two pairs!), Medusa belt buckle (Jon found in a 50p box of horse brasses in a charity shop). 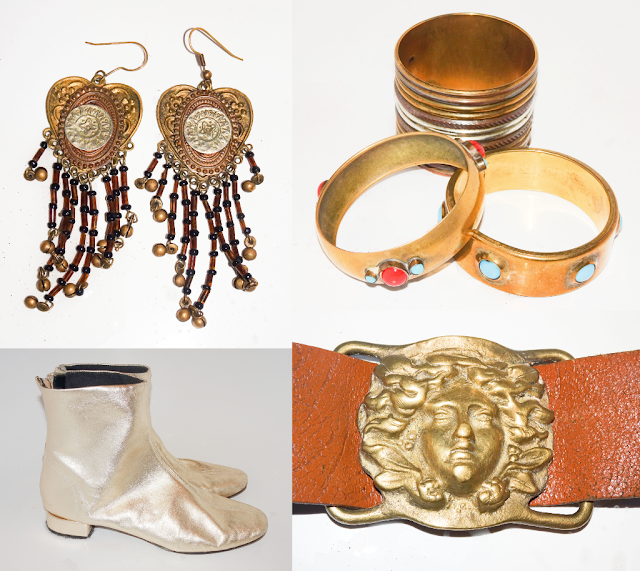 My cuttings in the propagation station had rooted so I potted up the Mother-in-Law's Tongue and the Zebrina outside in the shelter. 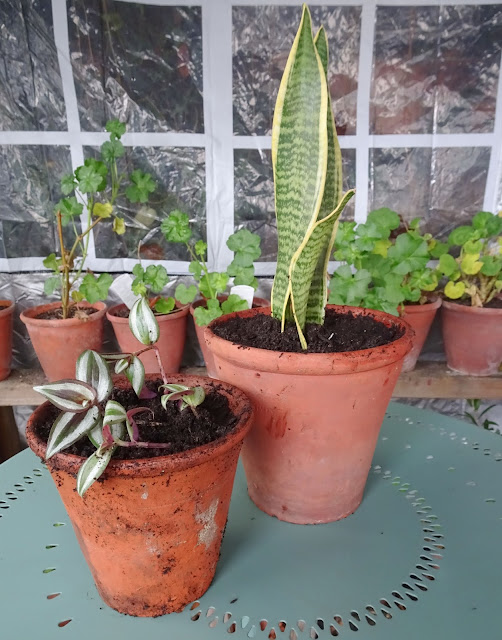 After Jon got back from dropping off the bike, we had a coffee and Izzy the postman arrived with a parcel. I'd had a hankering for a Breton top and after some extensive research found a French brand called Armor Lux, established in 1938 and, eighty-three years later, still committed to producing sustainable, high quality and fairly traded garments. As luck would have it I found the exact top I wanted in my size & colour combination (aubergine & navy) on eBay on Sunday and won it for a bargainous £8.50 (they retail at 55€) 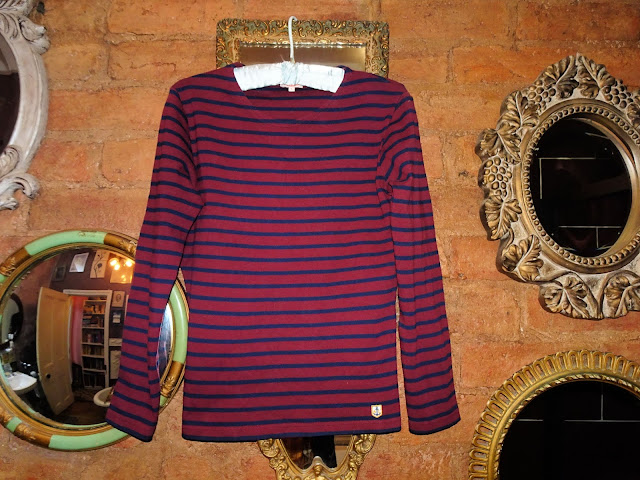 I threw it in the washing machine along with the contents of the laundry basket, hung it all up to dry in the utility room and then had a bowl of noodles for lunch. 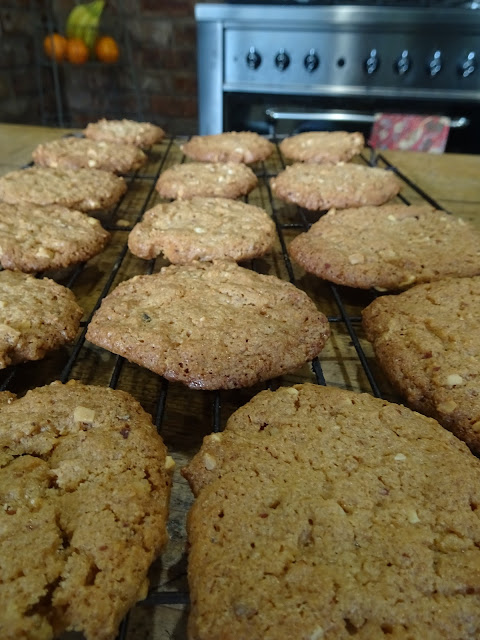 When Jon whizzed back to the repair shop to collect the bike I made him some flour-free, peanut butter biscuits as a treat (recipe HERE). I played around with my sewing for a bit and then we went for a walk around the block, perfectly timed as the forecasted rain started the second we got back. Liz (Adrian's wife) had been having a sort out and sent me a couple of coats she no longer wanted. The quintessentially British classic, the waxed Barbour jacket, went straight into the Kinky Shed. This vintage Elgee of London beauty needed repairing, which I did at the kitchen table accompanied by Pointless. I tried it on afterwards and I'm rather smitten. 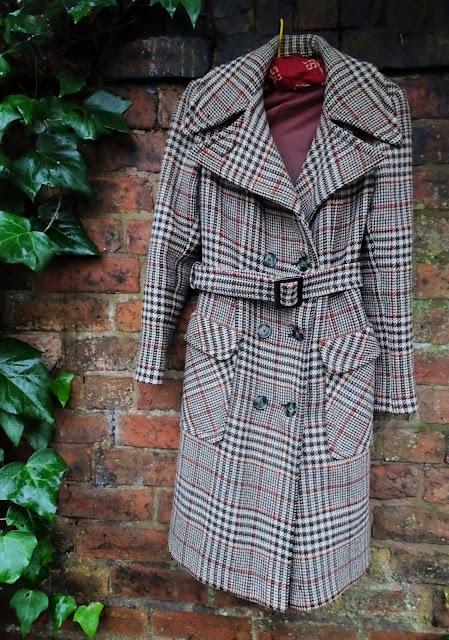 Tea was pizza (what can I say? We love it!) accompanied by corn on the cob and coleslaw. 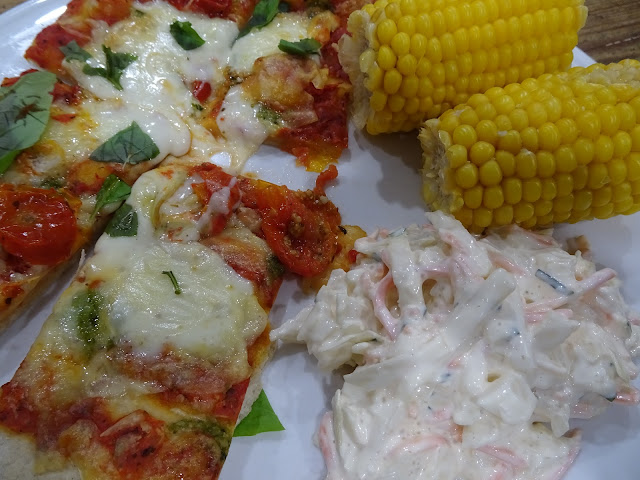 The previous evening we'd started watching Monster, a gripping but rather unsettling Norwegian noir on Channel 4's Walter Presents and so continued with a couple more episodes. Leaving Jon to his music I went to bed with the book I'd started on Monday night, another grisly thriller. With my viewing and reading habits you'd think I was obsessed with murder, in real life I'm a cheerful soul, honest! 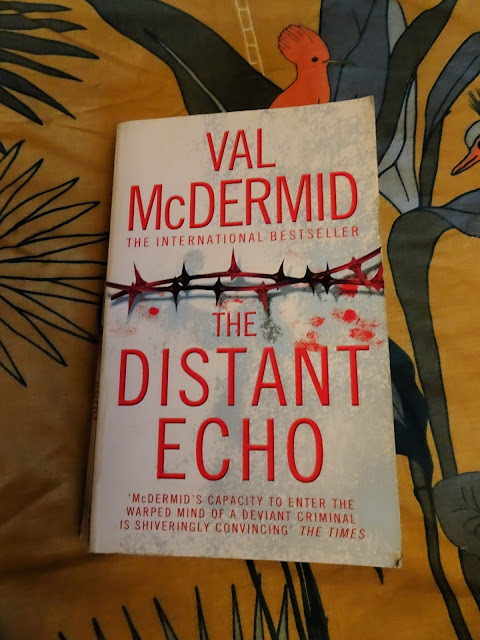 Storm Christophe had arrived late the previous evening and I awoke on Wednesday to torrential rain and gusty winds. After my Wii Fit workout I wrapped my eBay sales parcels, put away yesterday's laundry and joined Jon for breakfast. 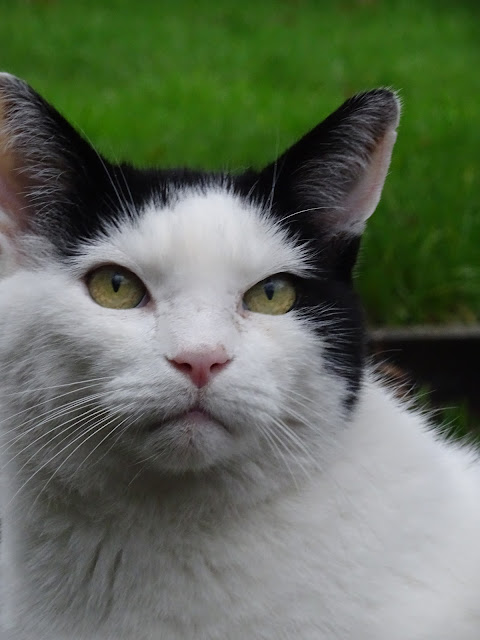 It's not favouritism, Stephen won't stay still long enough for a photo! 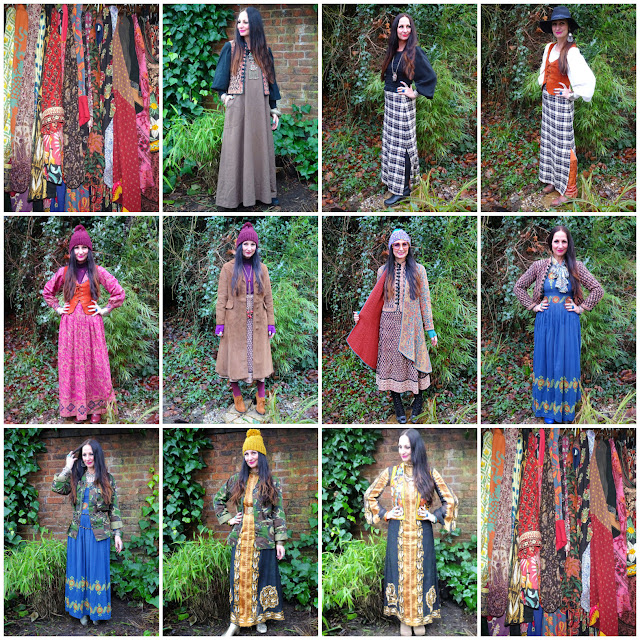 My self-imposed Wear:Sleep:Repeat challenge is making getting dressed during lockdown a lot more interesting. I'm also putting a bit more thought into my accessories rather than reaching for the same combinations day after day. 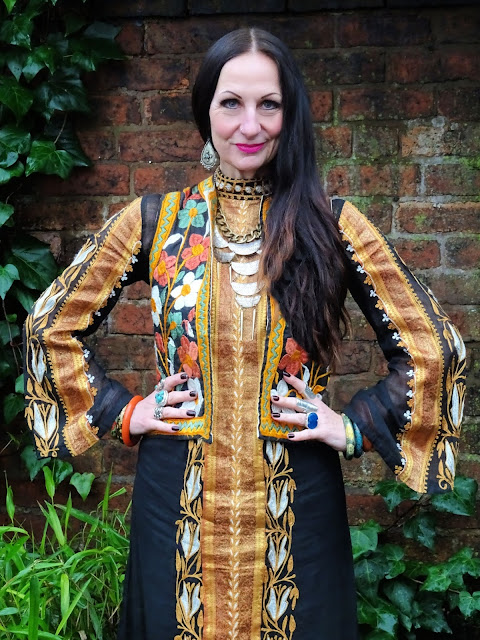 I'm wearing Tuesday's kaftan with a vintage Kashmiri wool work waistcoat, bought from eBay, over the top. I've no idea what's going on with the colours in the photo below, I look like I've been painted. 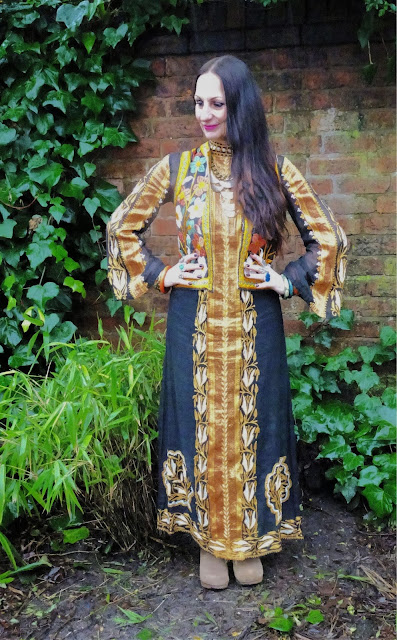 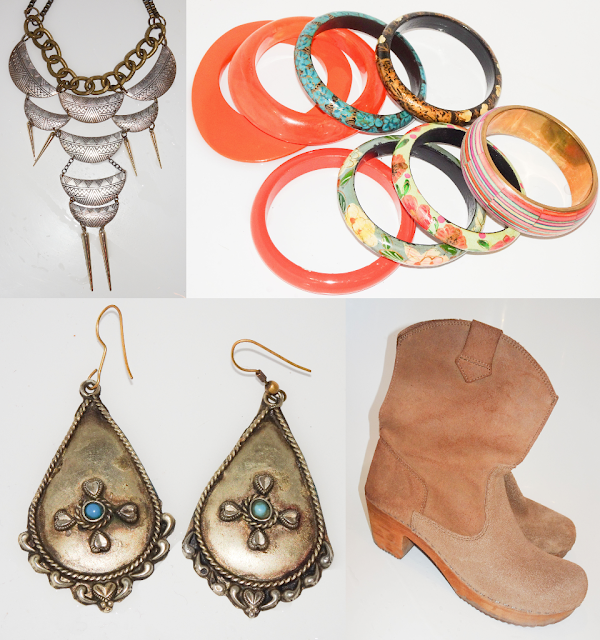 Whilst Jon continued with painting the window frames, I used the kitchen wall as a backdrop and took photos of the Banjara bags we used to buy from friends in India to sell at festivals. 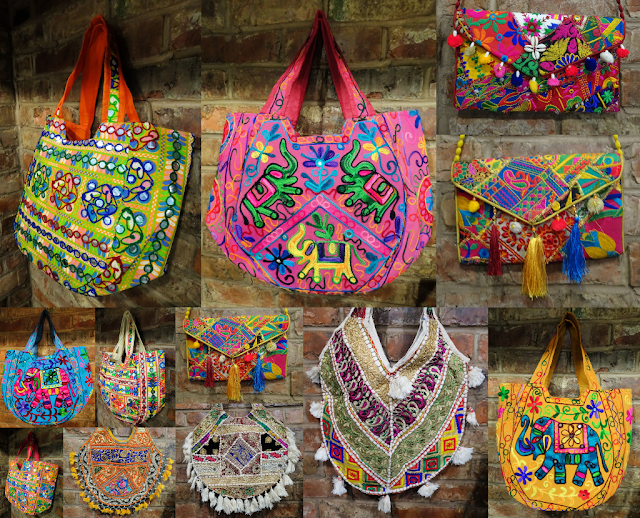 After a break for noodles Jon continued with his painting whilst I did a bit more sewing. Can you see what it's supposed to be yet? 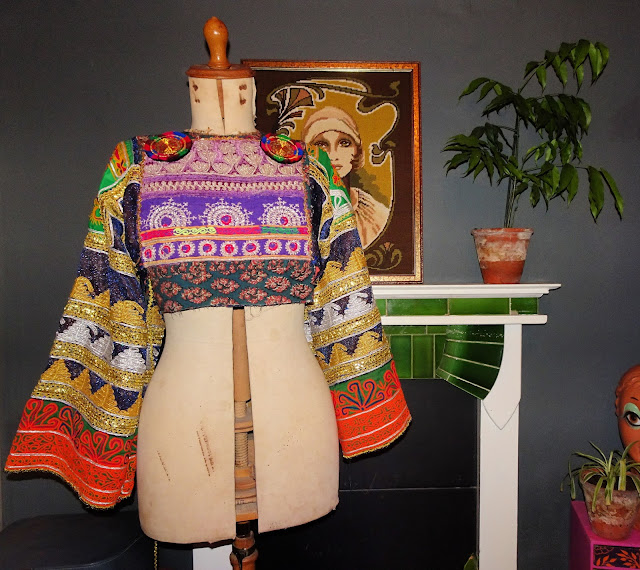 We didn't go for our daily walk as the paint was still drying & we couldn't leave the house with the windows open so we made a promise to go for a proper stroll tomorrow whatever the weather. Instead we downed tools and watched Joe Biden's inauguration and raising a glass of American-style beer in his honour. 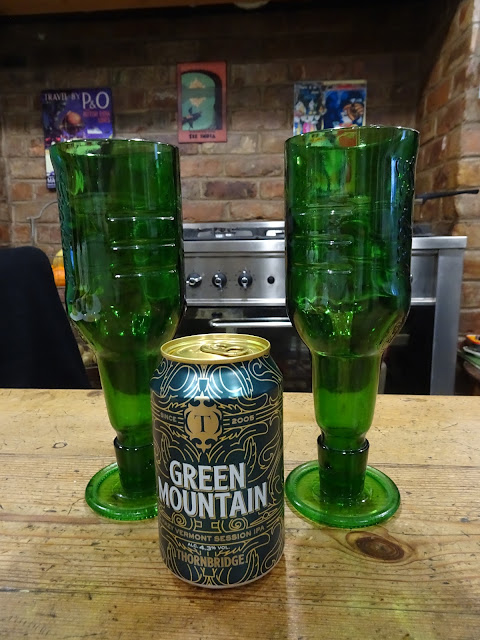 Tea was corn on the cob, sweet potato wedges with melted cheese and a salad using the rest of our Poor Man's Capers. 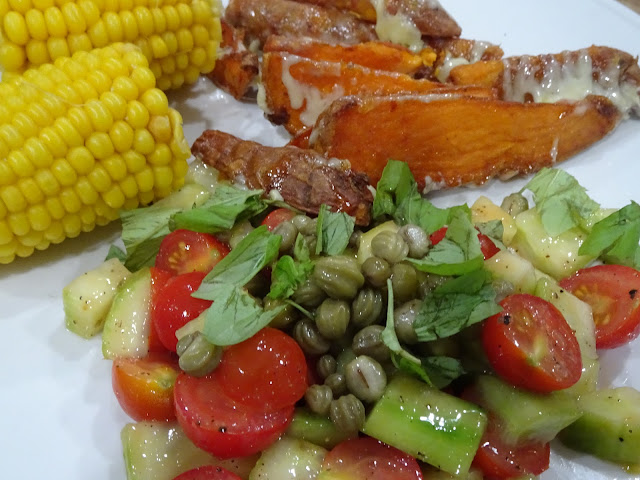 After such a miserable day weather-wise I've been looking forward to our Wednesday night rum since this morning. Cheers!
Stay safe and see you soon!
Posted by Vix at Wednesday, January 20, 2021