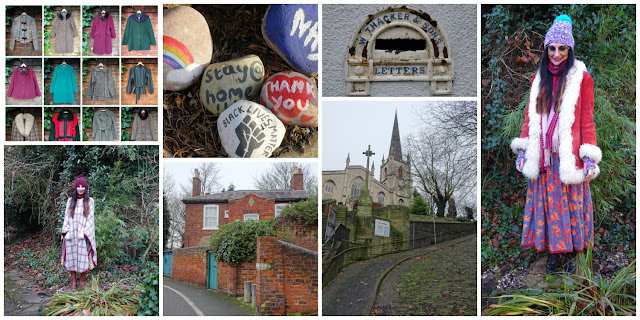 On Saturday morning Jon was up first, made tea and brought it back to bed where we lay chatting until 9am. As he needed to pop to the vets to pick up Stephen's prescription he left me in charge of the sausages. I stripped and changed the bed, loaded the washing machine and threw it in the tumble drier 15 minutes later. By now Jon was back and we ate our sausage sandwiches. 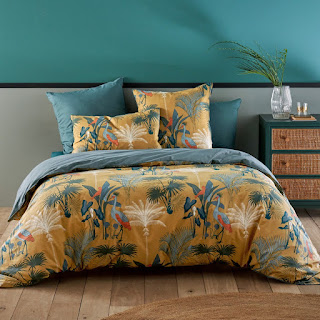 When I was changing the bed I realised that it had been four years since we'd last bought new bed linen so I had a look at La Redoute (my go-to place for pure cotton bedding) and treated us to this gorgeous responsibly produced duvet set along with some organic cotton pillowcases and a sheet from their winter sale. Not super cheap but their stuff lasts years. 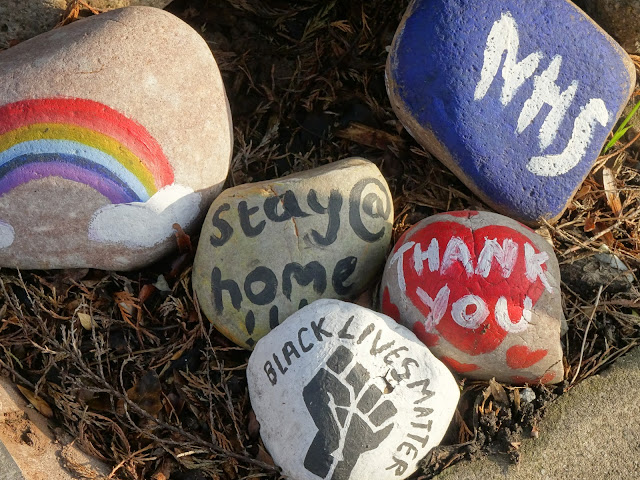 We went for a walk, rather than doing our usual circuit of the block we carried on along the main Birmingham Road looping back on ourselves. Considering we're in lockdown we couldn't believe how much traffic was on the roads - where on earth is everyone going? We spotted some painted rocks and again passed the GP surgery which still busy with Covid vaccinations. It was the first time in almost a fortnight that there wasn't snow underfoot although it was still bitingly cold. 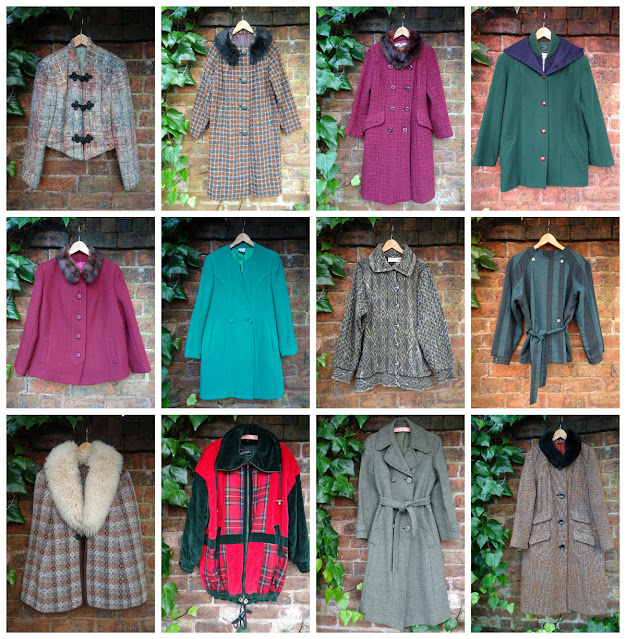 Back at home we thawed out with a coffee. I uprooted the nasturtiums in the border which had been killed off by the snow and then took stock photos in the garden. As usual I was wearing all the layers! My 1960s suede & sheepskin coat (from Second to None), a 1980s Anokhi dress (eBay), Mum's Biba boots, a Missoni scarf (charity shop) and my me-made hat and matching beer mittens. There was a thermal bodysuit, leggings and welly socks as well but you don't need to see those! 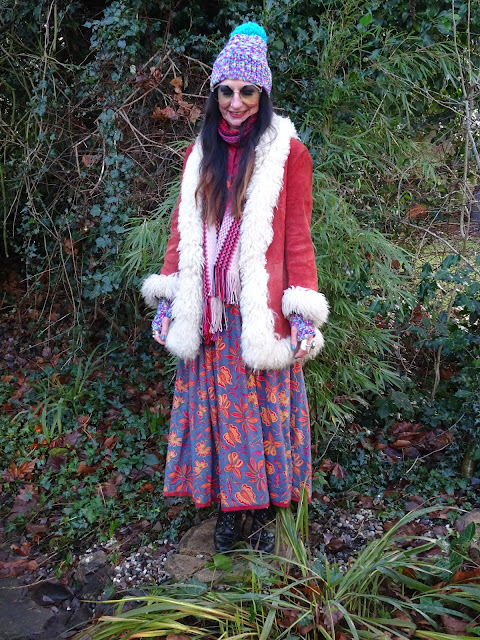 I spent the rest of the afternoon uploading my listings to eBay. Afterwards I emptied the kitchen cupboard to check if we needed anything as we've booked a supermarket delivery for Monday which we'd arranged in mid-December. After the rules were relaxed for Xmas Day, I was convinced that Covid numbers would be off the scale, not that I needed to be a genius to work that one out. 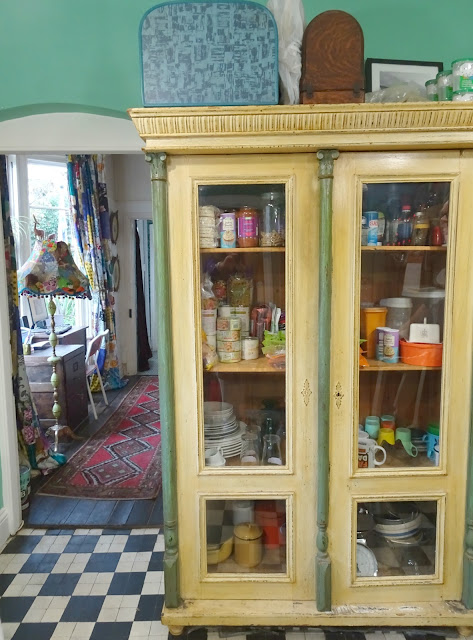 Tea was a shared tin of baked beans with vegan sausages and sweet potato fries topped with grated cheese. We'd finished watching The Serpent the previous night and spent the evening watching back-to-back episodes of the new series of Spiral. Needless to say, a few rum & colas were consumed. 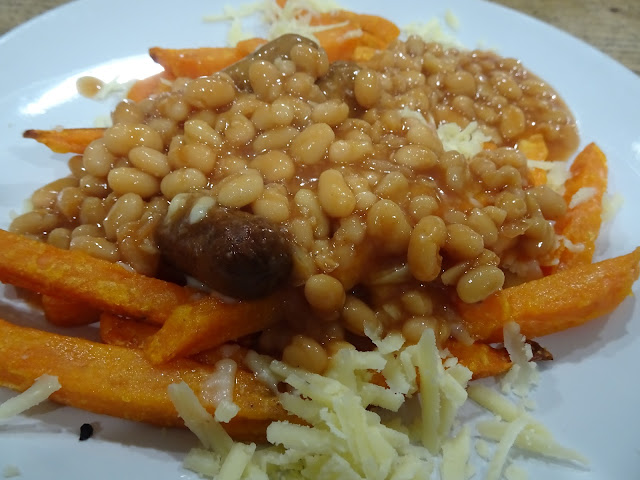 I was up first on Sunday morning, I mopped the kitchen floor, made tea and brought it back to bed where we read until 9am. Breakfast was a couple of slices of toast eaten in front of The Andrew Marr Show. After doing a load of washing and hanging it up to dry in the utility room, I photographed a few more jackets and coats and listed them on eBay. 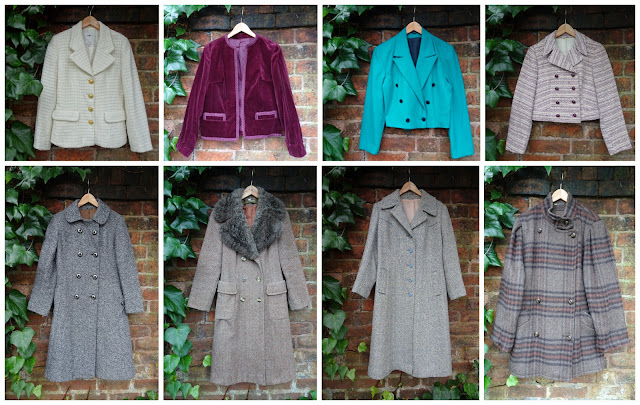 Lunch was a vegan sausage roll each. 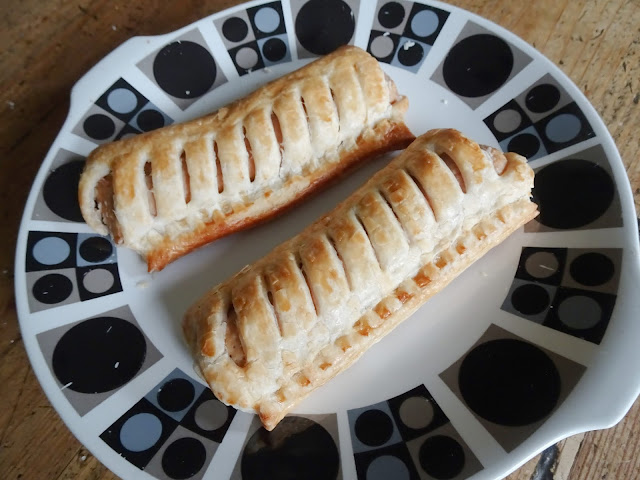 The plate was part of a 1960s dinner service Mum & Dad had for a wedding present. It's Focus by Barbara Brown for Midwinter or balls in boxes, as I called it as a child. 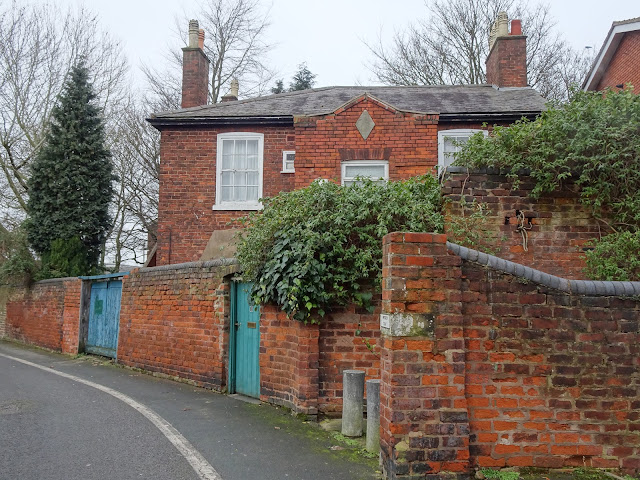 As the government advice is to stay local, we interpret our permitted once daily exercise as being a walk around the area in which we live and not driving somewhere to do it. A police car passed us, no doubt checking on the gangs of hardcore drinkers who pandemic or not, always congregate at the top of town. We avoided engaging in a conversation with a bloke in a tracksuit sipping Special Brew from a can, muttering about how England was becoming a police state. 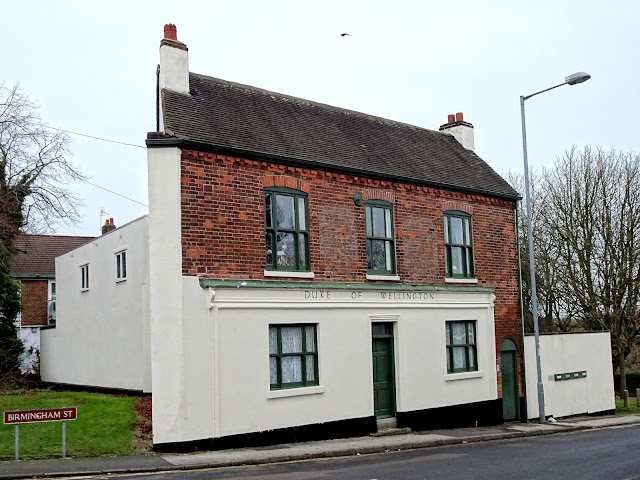 The Duke Of Wellington, formerly a pub with a marvellous Victorian tiled bar, now converted into flats. 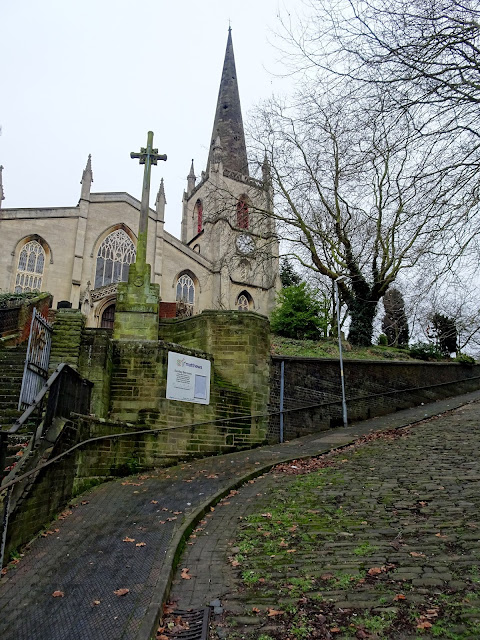 St Matthew's church from the front. That's the Hill of Doom, always a killer when you walk back from town loaded with charity shop finds. 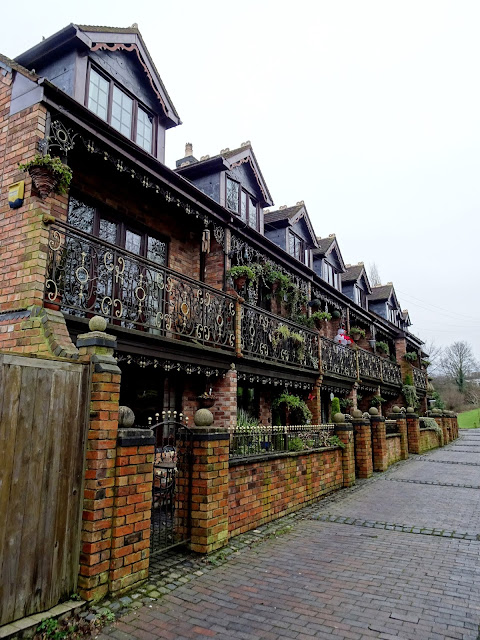 Modern but attractive, the reclaimed bricks they used to build this terrace help. 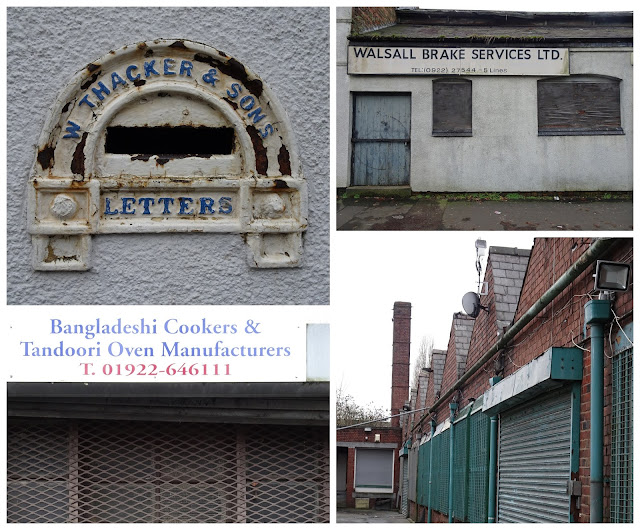 Walsall's industry, past and present. W. Thacker and Sons, manufacturers of equestrian fittings since 1845, Walsall Brake Services which closed down in the 1970s; a clothing factory, which is still operating and a tandoori oven manufacturer.
When I was sorting out stock to photograph the previous day I found my trusty Italian-made 100% wool Tricoville cape, a festival staple for many years. I'm a sod for sticking stuff in the stockroom with no intention of selling it, just to make space in the wardrobe. 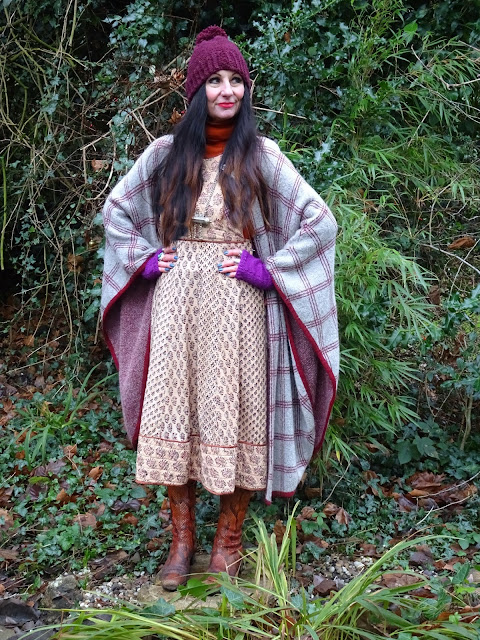 I can't stand the colour grey, it shrieks conformity and the need to blend in, but I'll forgive the colour as it's deliciously warm and holds many happy memories in its folds. 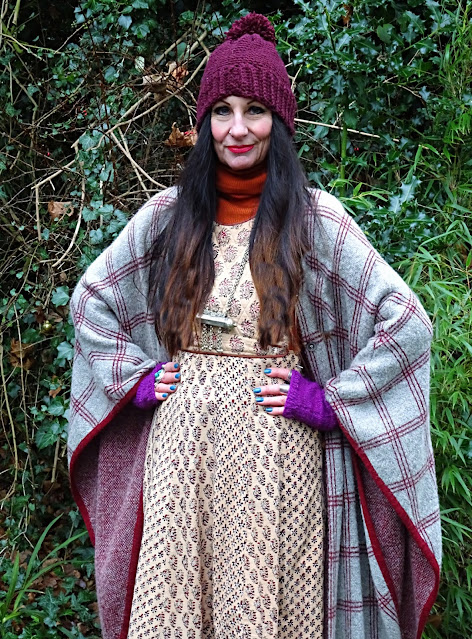 Why on earth hadn't I thought of wearing this rust ribbed polo neck under my Anokhi pinafore dress before today? I love it when wardrobe inspiration strikes. 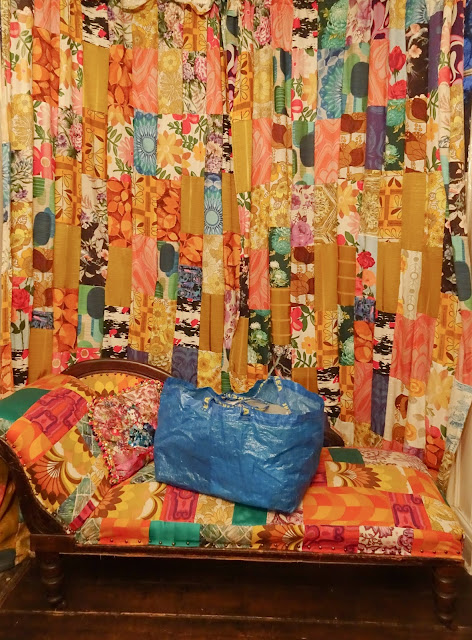 The rest of the day was spent wrapping eBay parcels. Keen to keep travel to a minimum, Jon drops the parcels off at the Post Office twice a week, although if the Covid numbers continue to climb at the alarming rate that they are doing then I shall take advantage of the Royal Mail's new collection service and pay to get them picked up from the house. 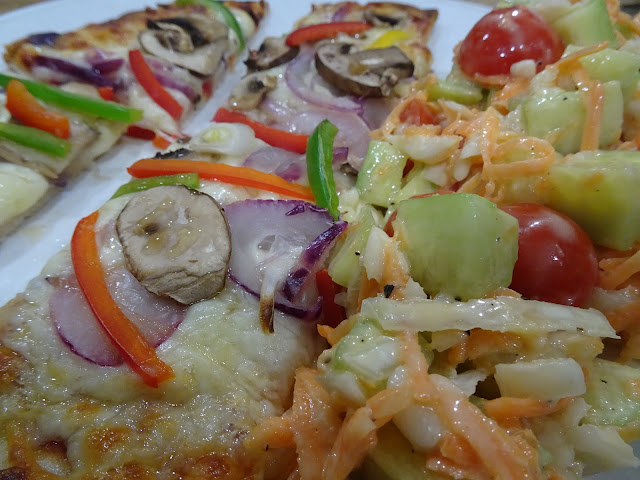 Tea was half a pizza with salad. I'm not sure what we'll be watching later but Jane's suggestion of Traces, based on a book by Val McDermid and currently on the BBC i-player sounds like a possibility.
Stay safe and see you soon!
Posted by Vix at Sunday, January 10, 2021

Email ThisBlogThis!Share to TwitterShare to FacebookShare to Pinterest
Labels: Block Print, Car Boot Buys, Food, It's All About Me, Kinky Melon, Our House, Out and About, Outfit