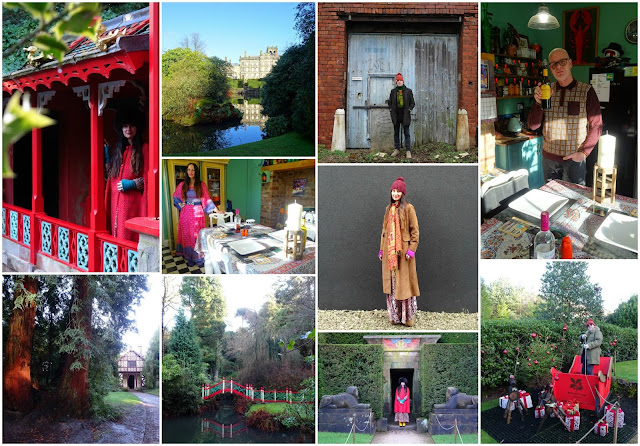 Hello, friends! I hope that despite the circumstances you've managed to have yourselves a very happy Xmas. 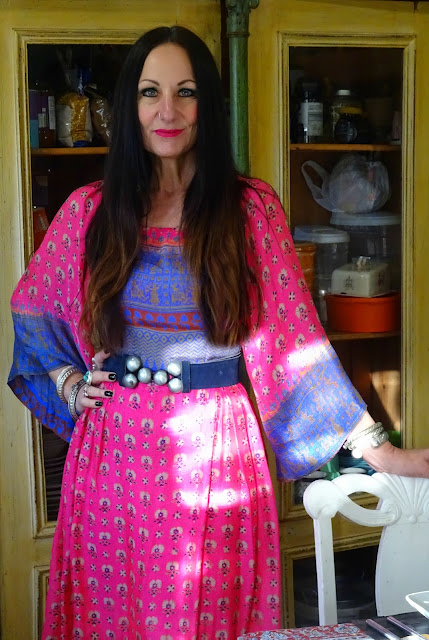 On Xmas Day Jon was up first, while he was in the kitchen I snuck downstairs and brought the presents I'd bought him back upstairs and we opened them in bed, drank tea and read for a while. It was a gorgeous day, bitterly cold but blindingly sunny.

We opened our other presents in the lounge listening to 6Music, ate a slice of toast and had a thoroughly lazy morning. I read the Sarah Jane Adams book Lynn and Philip had bought me for my birthday and Jon watched a Carry On film before kicking off the dinner preparation. 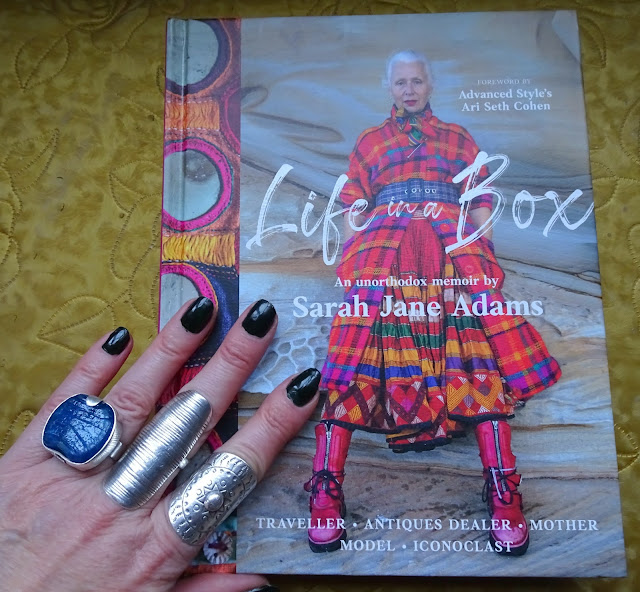 At midday we cracked open the wine to help the proceedings along and we toasted absent friends - both our real-life and virtual ones!

Tony arrived at 1pm and we ate at 2pm accompanied by Jon's special music mix - which, I'm sure you'll not to be surprised to learn didn't include a single Xmas song. The boys had chicken with pigs in blankets and I had a nut roast.After lunch we opened presents and chatted until 7pm when Tony walked back home (he was due in work in the morning ready for the Boxing Day sale). We washed up and cleared everything away. We wouldn't be eating again.

We started to watch Wasteland, a grim Czech crime thriller, but all the excitement of having company (and seven hours of boozing!) had us admitting defeat at 9.30pm and we went to bed.

On Boxing Day Jon was up first, he brought mugs of tea back to bed after seeing to The Lads and we read until 8.30am. As it was Saturday (and in our world, just a normal day) I stripped and changed the bed, loaded the washing machine and joined Jon downstairs in the kitchen for a slice of toast - we'd considered the usual Saturday morning sausage sandwich but after such a big dinner yesterday, decided against it. We were expecting a violent storm later so went for a long walk before it hit, wandering around the old industrial quarter, an abandoned 17th Century burial ground and through the narrow alleyways of Georgian Walsall, passing Blue Coat Infants School where Jon and I were in the same class for a while. I was considered gifted back then and put in a higher year (not sure what went wrong!) 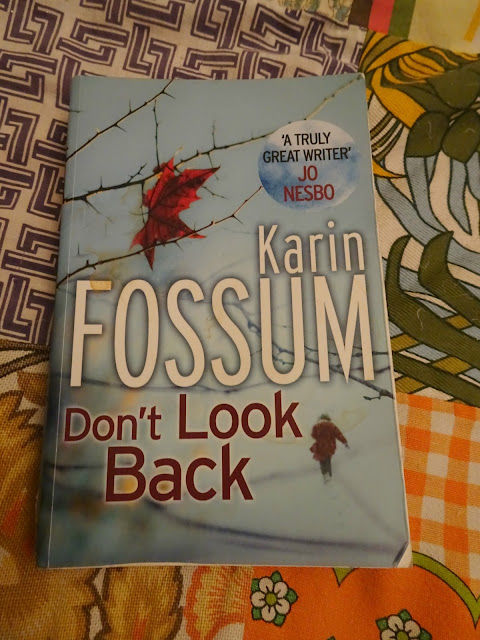 Back at home we had a bowl of noodles and watched another film based on a Le Carre novel, The Little Drummer Girl (neither this or the BBC 2018 drama are a patch on the book although Florence Pugh's hippie wardrobe was a million times better than Diane Keaton's '80s wet look perm, stilettos and shoulder pads) then spent the rest of the afternoon reading an excellent Nordic Noir. 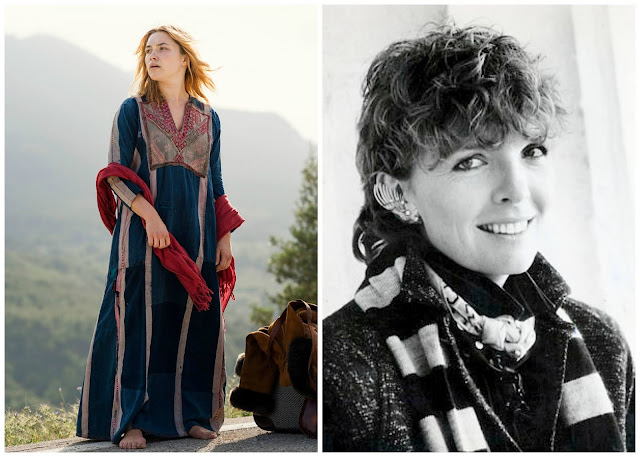 After cheese, crisps, olives and crackers we poured ourselves a large rum and coke and watched Monsoon, a quasi-film documentary set in Vietnam on the BBC i-player. I broke the habit of a lifetime and watched something with Celebrity and Christmas Special in the title - the festive edition of The Great British Sewing Bee - I'm not quite sure why. We watched another episode of Wasteland, grim and bleak being far more our thing, and retired to bed. Storm Ella had arrived and the sound of torrential rain and gale force winds kept Jon awake until the early hours. 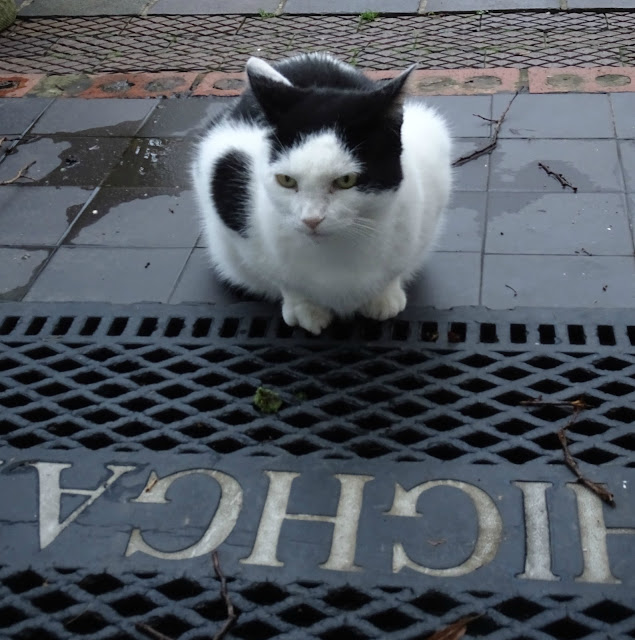 On Sunday I was up first, watered the houseplants and brought tea back to bed, finishing the book I'd started yesterday. Breakfast was banana porridge. After the overnight storms the glorious sunshine came as a most welcome surprise as did the lack of damage after a cursory inspection of the garden. 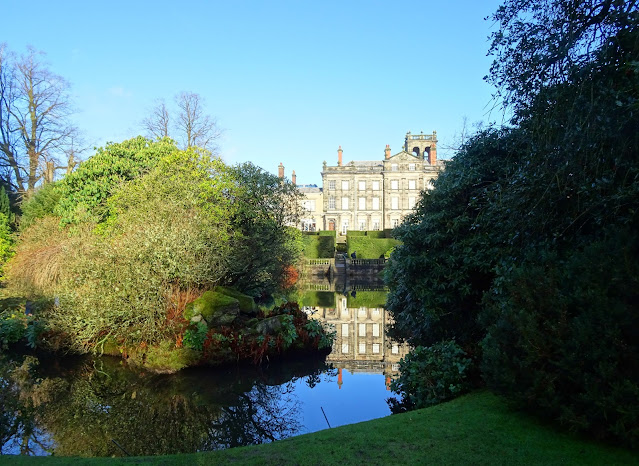 At 10am swathed in layers aplenty & armed with a flask and some mince pies, we got in the car and headed over the border to Staffordshire (also in Tier 3) for a wander around the splendid Biddulph Grange on the outskirts of Stoke On Trent, a series of themed Victorian gardens established by James Bateman who, from 1841, spent more than twenty years collecting plants from all over the world. We last visited in July, 2020 (HERE).

Connected by a series of subterranean tunnels, each leads you to another part of the world..... 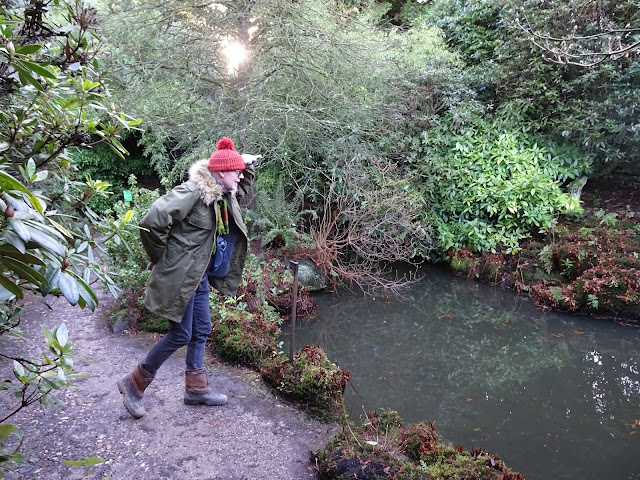 From a Himalayan mountainside, 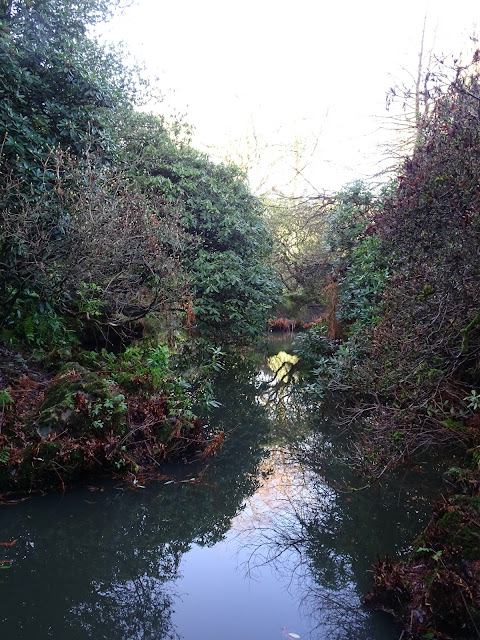 To a Scottish glen. 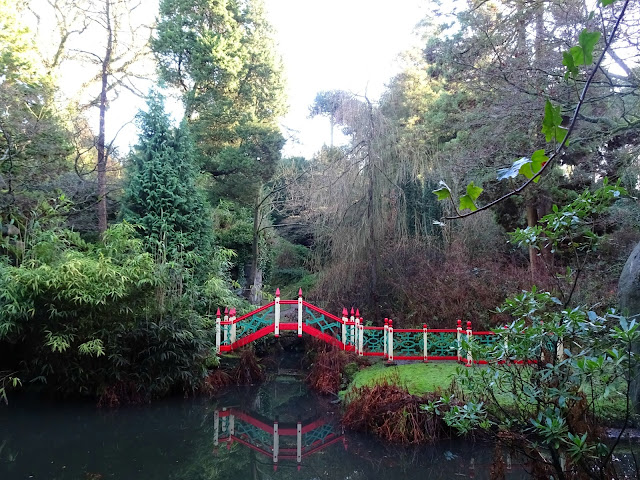 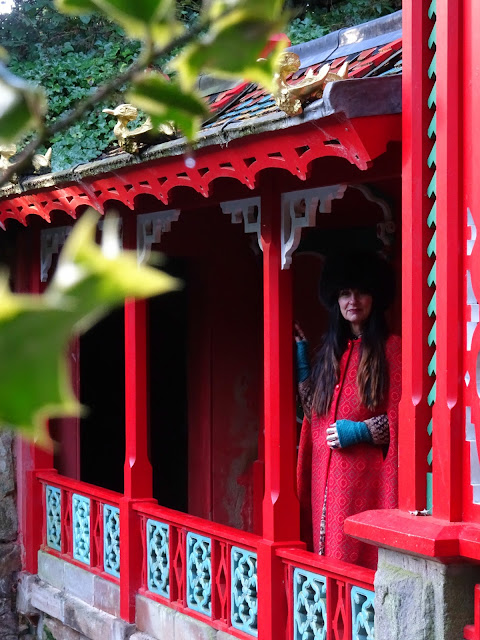 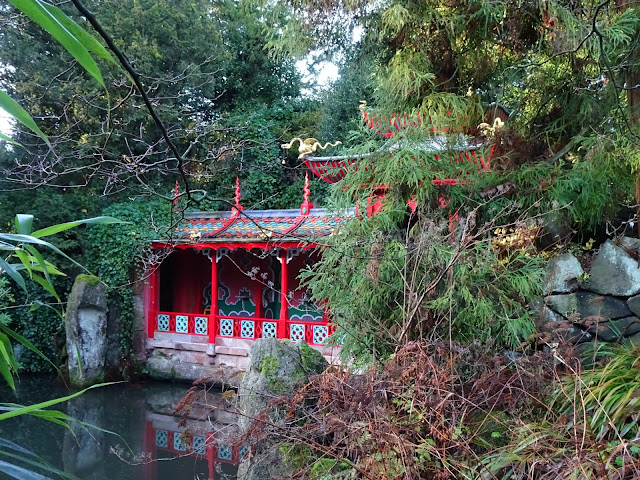 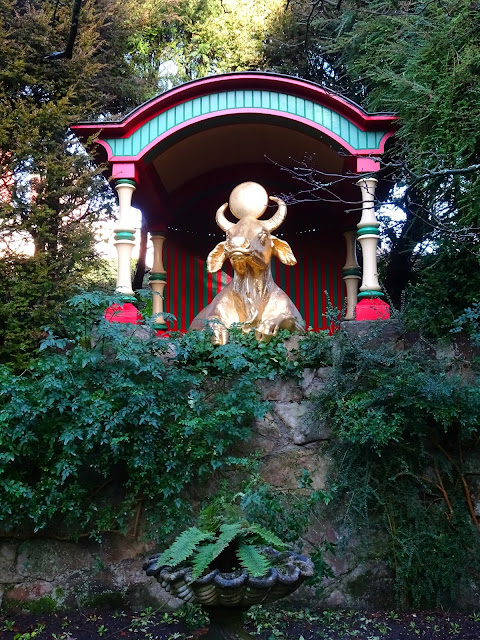 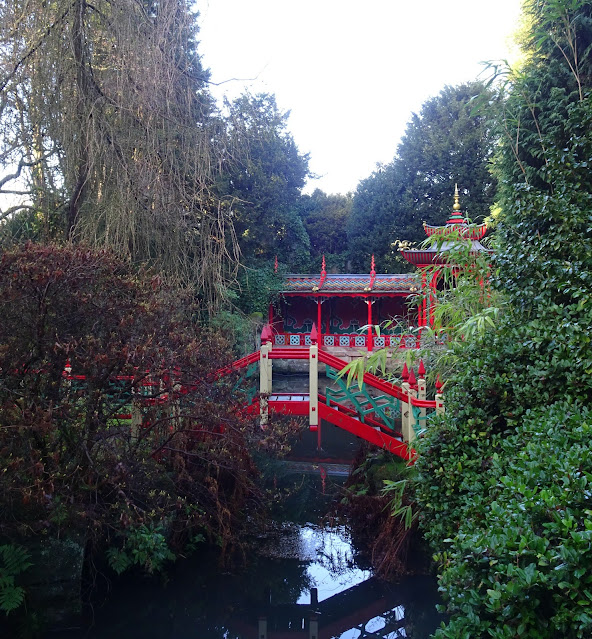 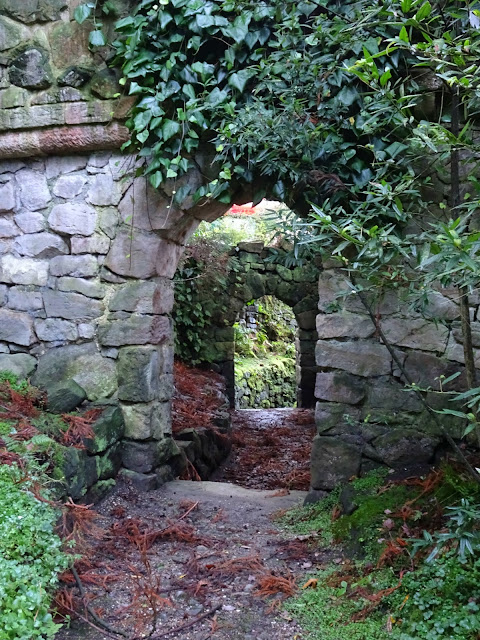 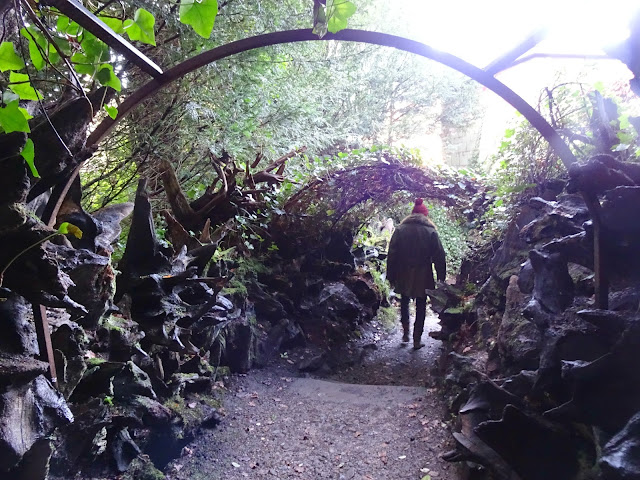 And the other-worldly Stumpery, 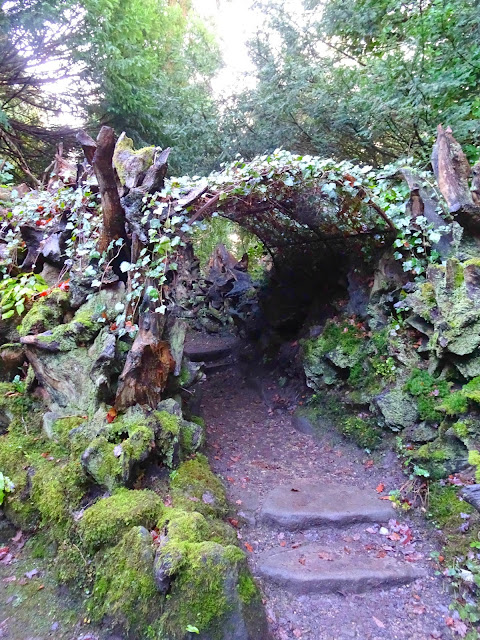 Past an Italianate villa.... 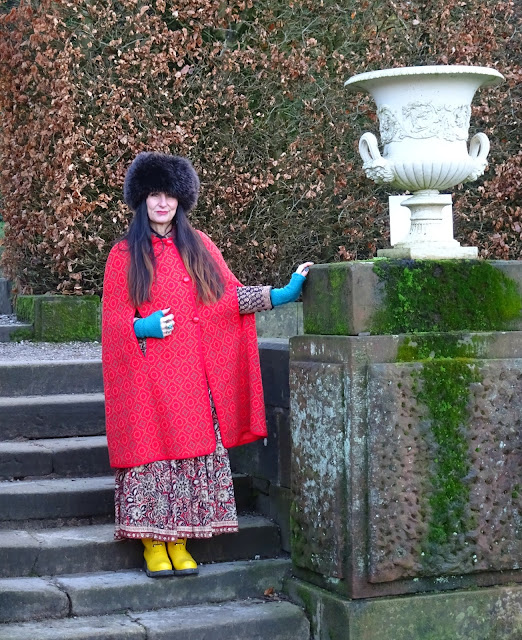 Before finding yourself in Ancient Egypt. 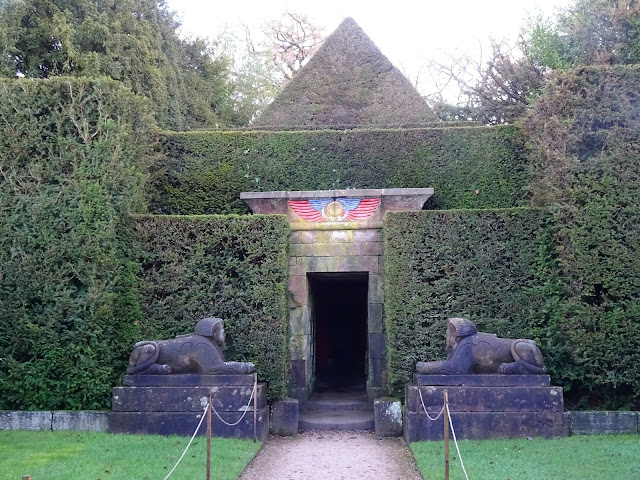 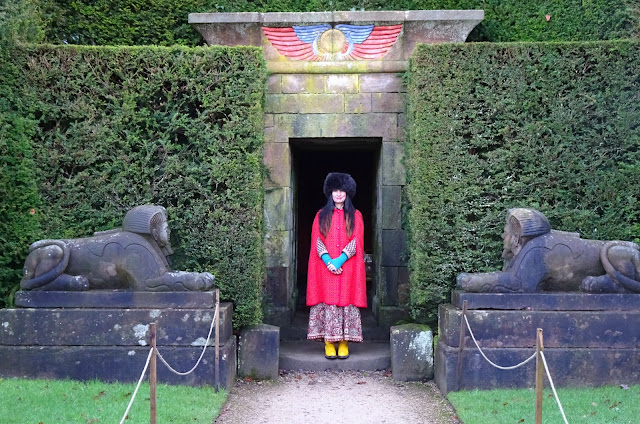 Strolling alone through the Arboretum beneath the giant Sequoias with the winter sunshine shimmering through the trees it's hard to imagine that there's a worldwide pandemic raging. 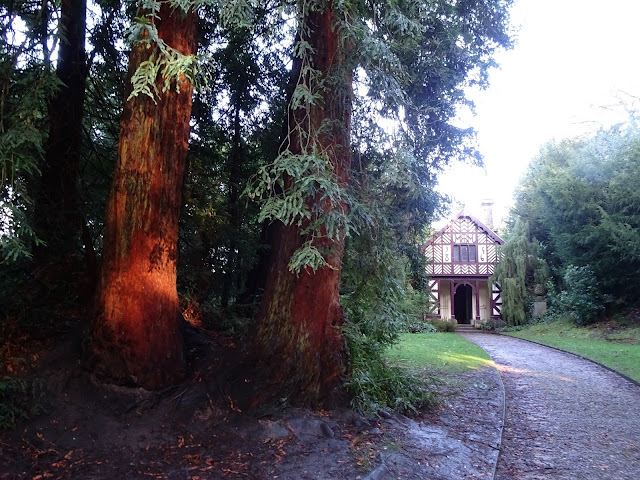 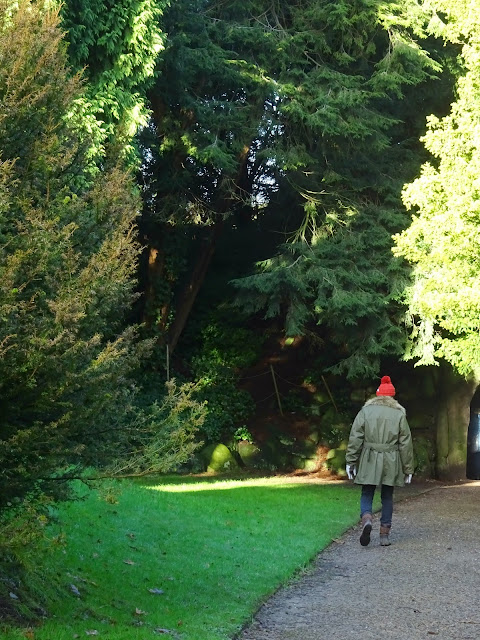 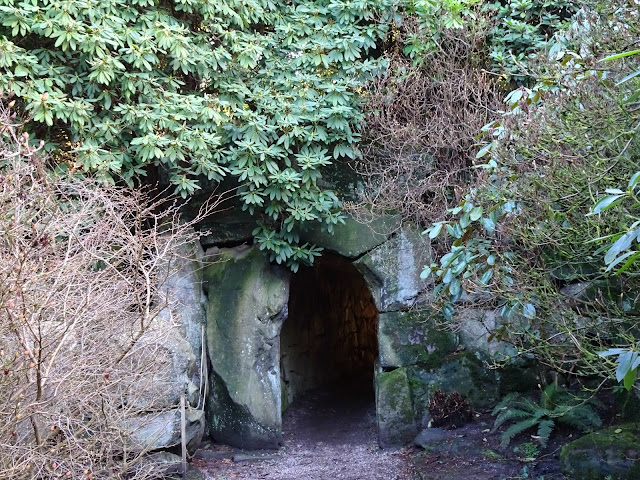 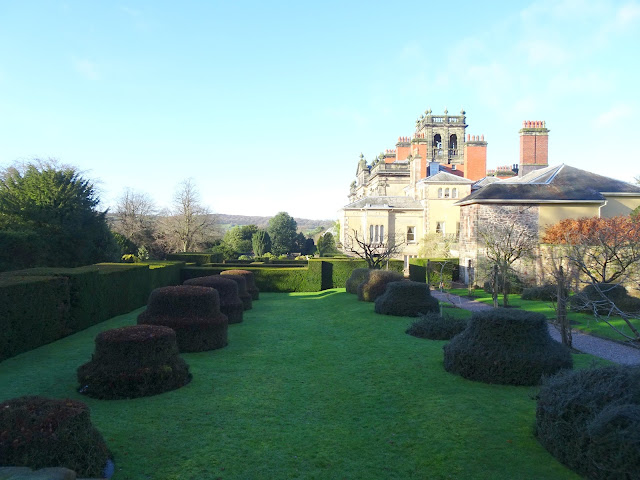 We even found Santa's grotto, hijacked by a deranged bloke in a Swedish Army parka and a pompom hat. 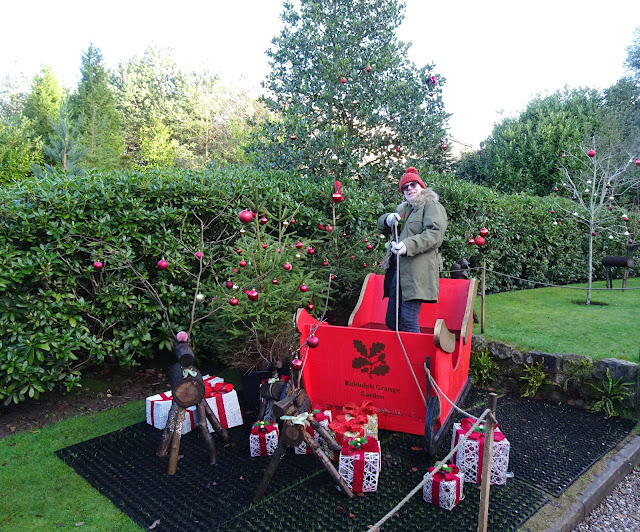 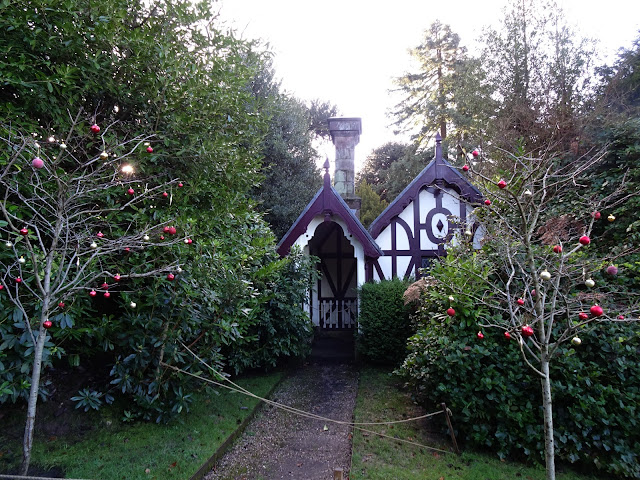 After mince pies and mugs of tea we headed back down the road to Walsall where we spent the rest of the afternoon doing very little.
Thank you so much for all the kind comments and messages, I've loved hearing what you've been up to over Xmas and look forward to catching up with Blogland tomorrow. Right now there's a glass of rum and a film waiting for me in the lounge!
Posted by Vix at Sunday, December 27, 2020

Email ThisBlogThis!Share to TwitterShare to FacebookShare to Pinterest
Labels: Block Print, Books, Food, It's All About Me, Jon, National Trust, Out and About, Outfit