The Not Quite As Distant Holiday Diaries - Chania, Crete 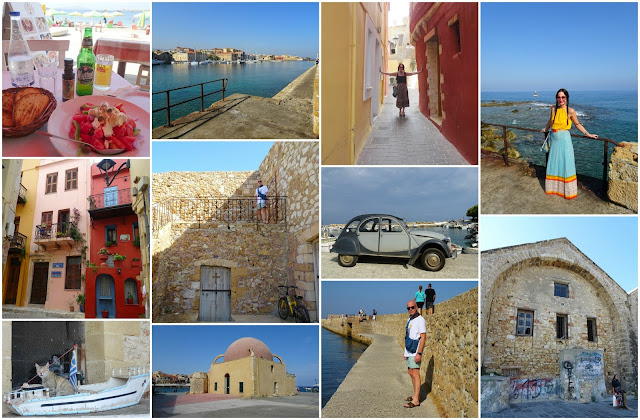 Step away! We're back from eleven days exploring the gorgeous Greek island of Crete and, in line with current government Covid regulations, we're having to self-isolate for the next fourteen days. 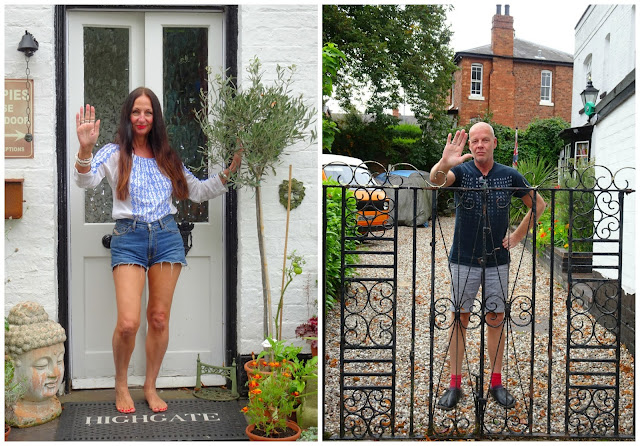 When I first travelled to Crete in 1990 I was in my early twenties and loved it. I stayed in Ayios Nikolaos on the east of the island back in the days when holidays meant dancing all night and doing very little by day, although I did visit the former leper colony on the nearby island of Spinalonga and pretty Elounda beach. My boyfriend at the time insisted on wearing his Wolverhampton Wanderers strip & picking fights with Brits in opposing team shirts. Thirty years on, having traded in the old boyfriend for a far better model, the only obstacle standing in the way of a triumphant return to Crete was the small matter of travelling abroad during a worldwide pandemic. 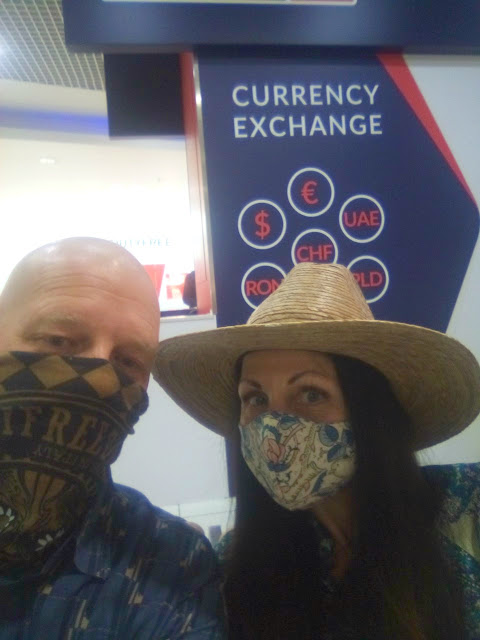 We flew from our local airport, Birmingham. After handing over our bag, our passports and the Passenger Location Form* (PLF) were checked by the sole airline rep on duty who waved us through to passport control. The airport was spookily quiet, many of the shops were closed and there was plenty of empty seats to allow passengers to maintain a safe distance. We decided to forego the obligatory pint at Wetherspoons, eating half the sandwiches Jon had made before we left home. At the departure gate our PLF forms were checked once again. A man in front of us was denied boarding as he'd neglected to apply for one. After hearing numerous reports in the media about lax cabin crew and passengers roaming the plane mask-free, we were slightly wary about the flight but we needn't have worried, Ryanair were brilliant. When we boarded we noticed that two lads in their 20s had removed their masks. When another passenger took them to task they replied that they were exempt and didn't have to wear them. He called a flight attendant who informed them that they either wore masks or would be removed from the flight. The masks went back on and stayed on. Nobody was allowed to get up from their seat, go to the toilet or open the overhead lockers without buzzing the cabin crew first to seek permission and, as the flight was only a third full, social distancing was pretty easy.
*These are available from the Greek Government website and submitted on-line by each passenger a maximum of 48 hours before departure. At midnight on the day your flight is scheduled to leave an individual bar-code is sent via email, permitting the applicant to enter Greece. No bar-code, no trip.
On landing at Chania airport some four-and-a-half hours later our PLF codes were checked both by immigration and the gun-wielding - but friendly - Greek police. Some passengers were chosen for random Covid-testing although we weren't. Outside the terminal we caught a taxi to Chania's Old Town. Masks are mandatory in taxis in Greece for both passenger & driver, with santiser available & the driver's seat screened off. On arrival at our destination we phoned the key holders of the apartment who turned up within minutes, both wearing masks. They showed us into what was to be our home for the next three nights and handed over the key. After nine hours of wearing a mask it was a real joy to remove it, crack open a bottle of wine, eat the rest of our sandwiches on the balcony & marvel at the late night warmth.

Travelling at such a weird time has its advantages, a lot of the available accommodation had been slashed in price. Our gorgeous 16th century Venetian apartment complete with four poster bed and roll-top bath was just £30 a night. 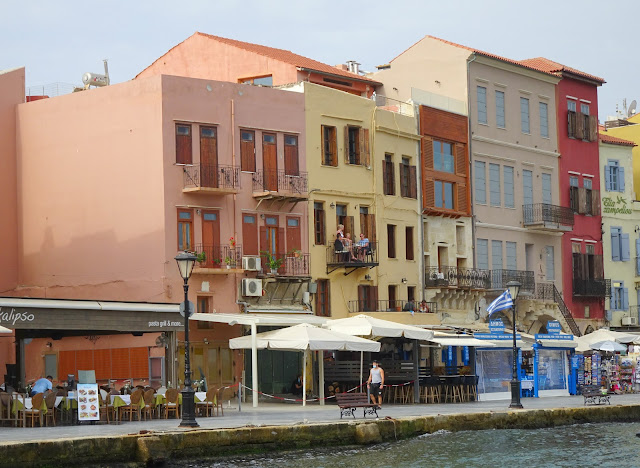 Islanders will tell you that Chania is Crete's spiritual capital, although the formal title was passed to Heraklion many years ago. It's a stunning city, with a shimmering waterfront and a jumble of Venetian streets, a maze-like old town contained by ancient city walls and littered with Ottoman, Byzantine and Minoan ruins.

In more normal times the stepped alleyways and narrow streets would be packed with both sightseers and residents going about their daily business but, in this strange new world, we'd often be the only people about. 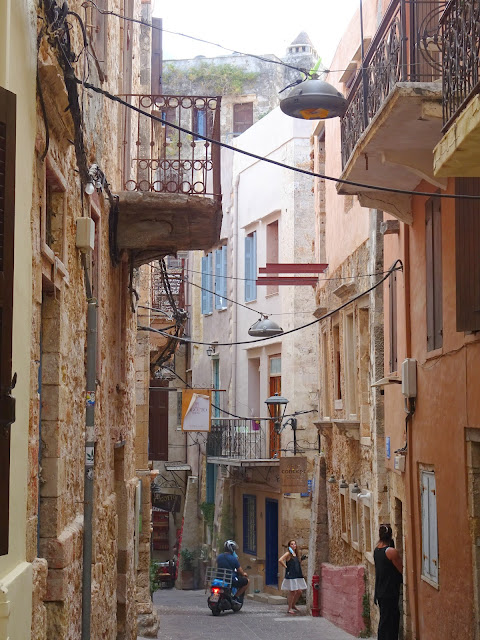 You might be able to see from the photos that mask wearing is mandatory both inside and out although most people exercise common sense, removing them whenever social distancing is possible. 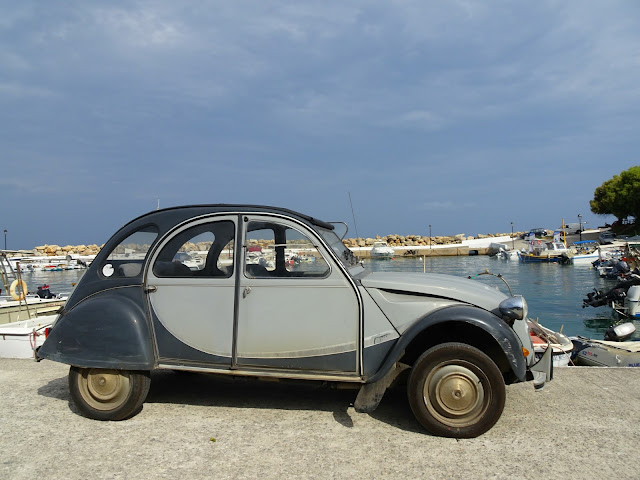 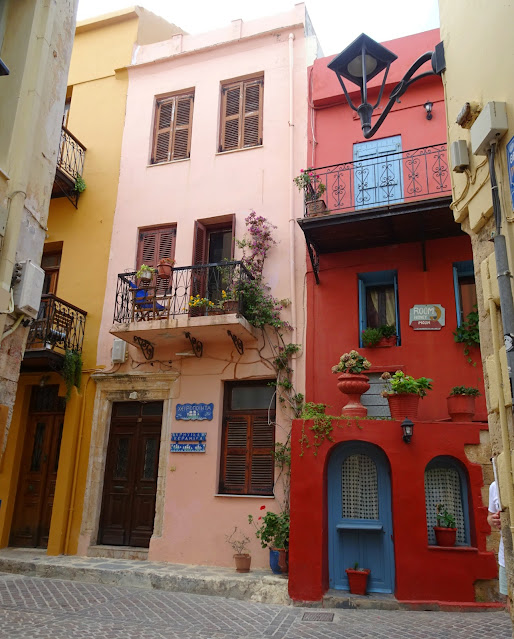 Despite Chania being one of the longest continuously inhabited cities in the world, tourism is relatively new and the architecture is finally being restored after years of neglect. 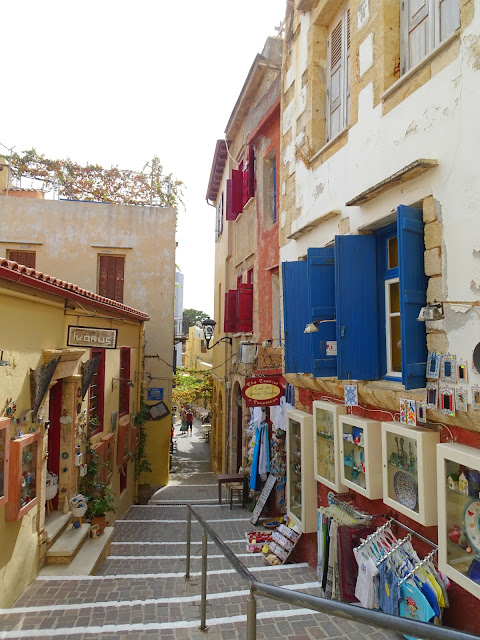 Known as Kydonia in ancient times, Chania was a substantial Minoan community, warranting a mention in Homer's Odyssey. It was captured by the Romans in 69 BC, then by the Byzantines where it remained part of their empire until the Venetians took over. During the thirteenth century the Genoese briefly seized it, holding control until 1285 when the Venetians returned, turning it into the island's most beautiful city. 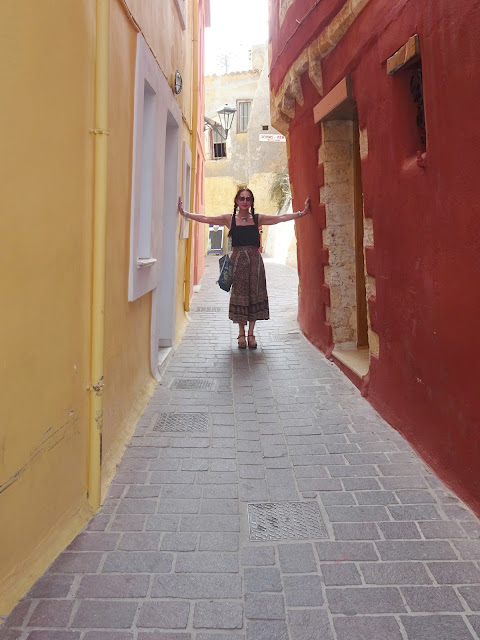 In 1645, after a two month siege, Chania fell to the Turks. Although churches were converted to mosques the remainder of the city remained relatively unchanged making it almost impossible to differentiate between Turkish & Venetian architecture. In 1897, following the outbreak of war between Greece and the Ottoman Empire, the Great Powers (Britain, France, Russia and Italy) imposed peace and stationed a joint force off the waters of Chania, finally forcing the Turks to leave. During World War II Chania suffered severe bombardment by the Germans, the destruction compounded by a fire which wiped out almost everything apart from the area around the harbour. 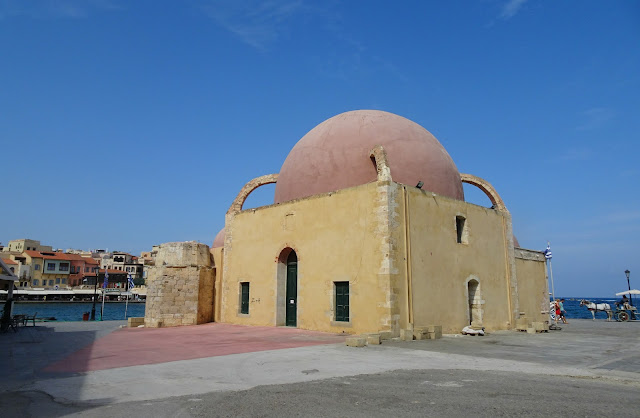 The Yali Hassan (meaning seaside) mosque was built in 1645, the year the Turks conquered Chania. It is the oldest Ottoman mosque on the island and although no longer in use as a place of worship, occasionally opens to host exhibitions. 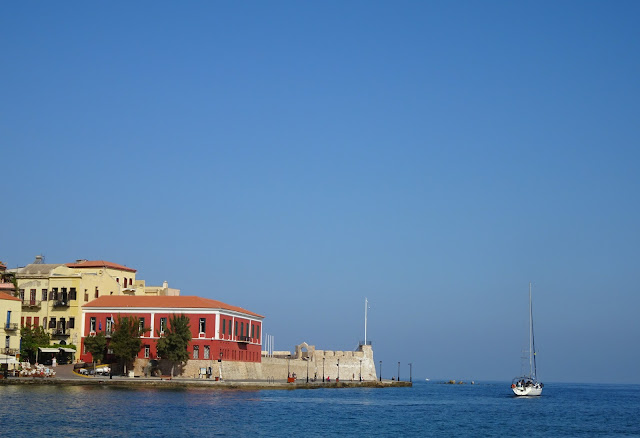 As with the other Greek cities we've visited we were amazed by the cleanliness and lack of litter. Graffiti is the only sign of disorder you'll come across. 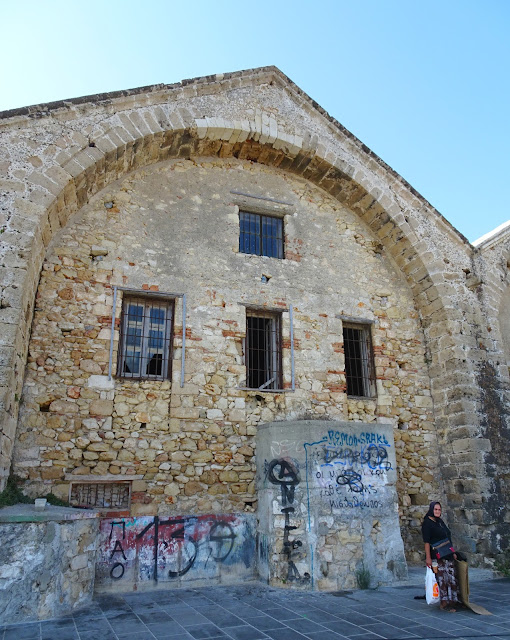 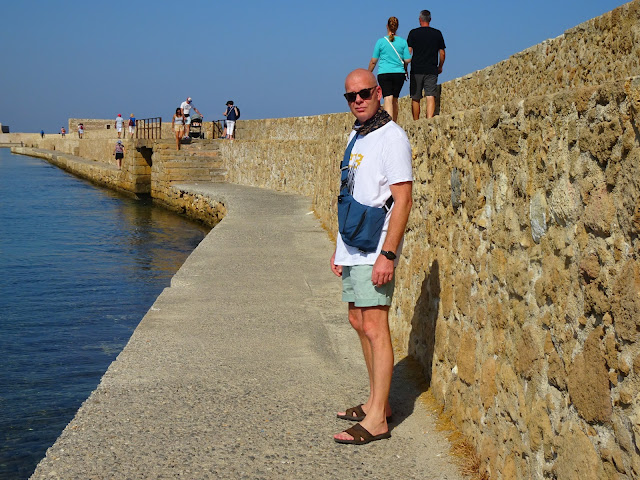 Much of the arched Arsenali in the photo below are in a ruined state although a couple have been sensitively restored into cafes and temporary exhibition spaces. 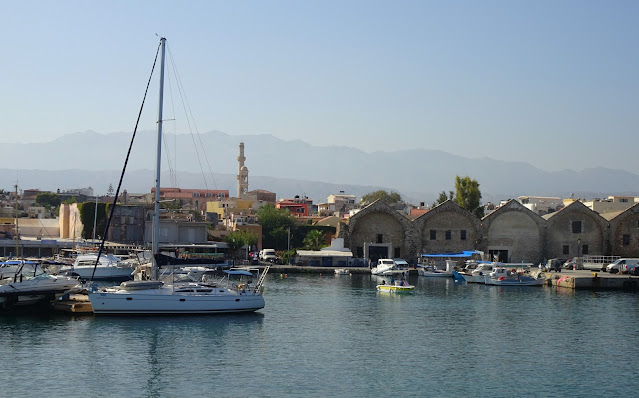 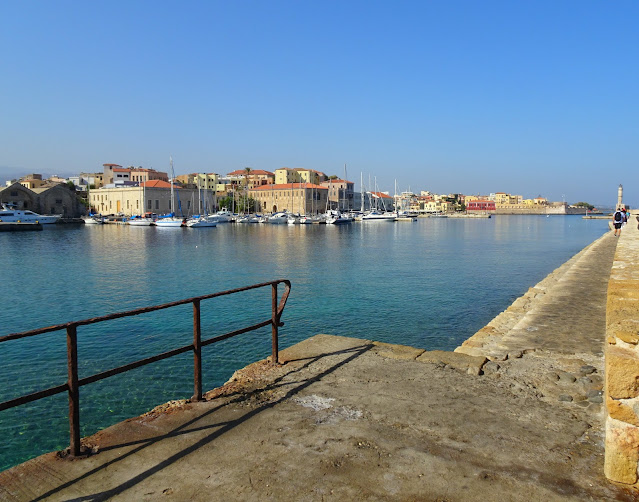 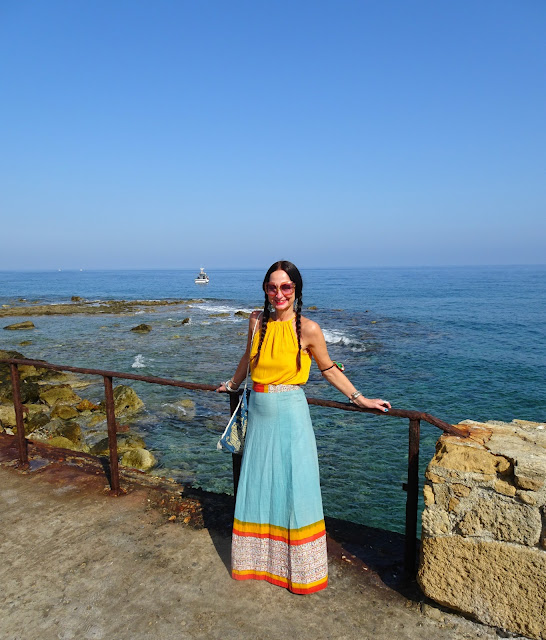 Our three days in Chania were mostly spent wandering the tangle of Medieval lanes and alleyways in the Old Town, invariably getting hopelessly lost. We ate lazy lunches in shady town squares, followed by complimentary bottles of raki which the waiters (always masked) claimed both helped aid digestion and to keep the dreaded Coronavirus away. The menus offered a Cretan rather than the better known Greek salad, served with freshly made mizithra cheese along with crisp barley rusks and tangy capers.

We spent an afternoon on Nea Hora, the city beach a 10 minute walk from the harbour, an immaculately clean Blue Flag beach which apparently gets absolutely rammed in more normal times. The water was impossibly clear and we loved watching sea bream fearlessly swimming in-between our ankles as we paddled.

After dark the temperature barely dropped, hovering at a balmy 28°C. The wonderful To Adespoto, a restaurant set within the ruins of a mansion destroyed by a bomb in 1940 served as a location for the 2012 film The Two Faces of January. The Well of the Turk, tucked away in a labyrinthine alleyway inside the old Turkish quarter of Splantzia, was another beautiful find. 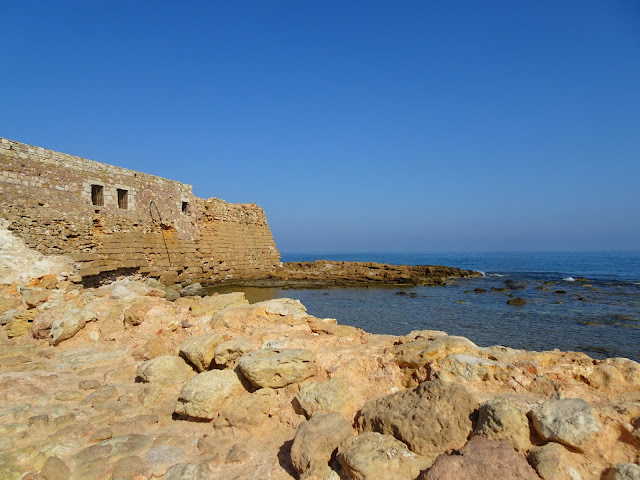 These ancient walls were constructed by the Venetians against constant raids by pirates, in particular those by the dreaded Ottoman Pirate, Barbarossa (1475 - 1546). 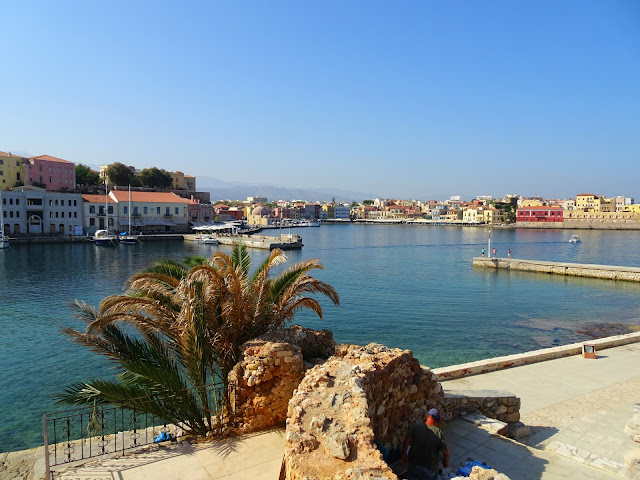 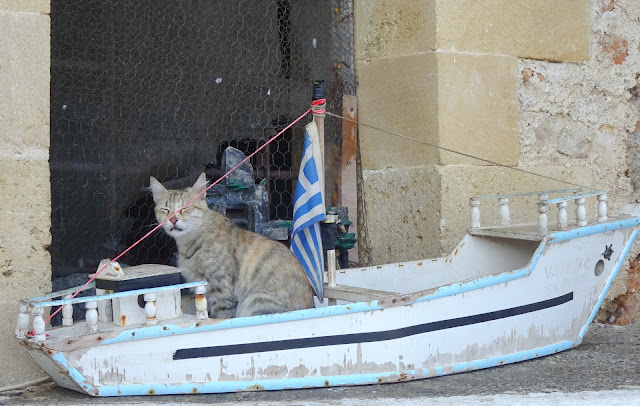 Of course we met lots of cats, huge groups of strays living in colonies fed and loved by the locals as well as possibly one of the silliest felines ever, this dozy tabby who had made this model boat into a home for both herself and her kittens.

After six months barely venturing further than our garden gate we weren't sure how we'd feel about spending time in Crete's second largest city but from the minute we arrived Chania bewitched us and the three days we spent there absolutely flew by. Atmospheric, beautiful and authentic. We'll be back. 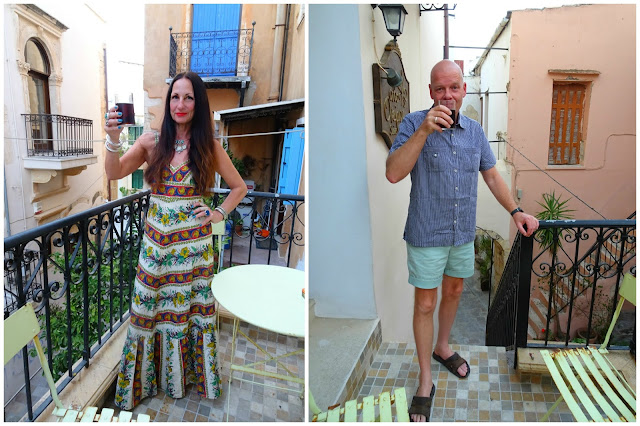 Yammas, Chania!
Hope you're all keeping sane, safe and happy. See you soon.
PS For all my Chania photos click HERE
Posted by Vix at Monday, September 28, 2020