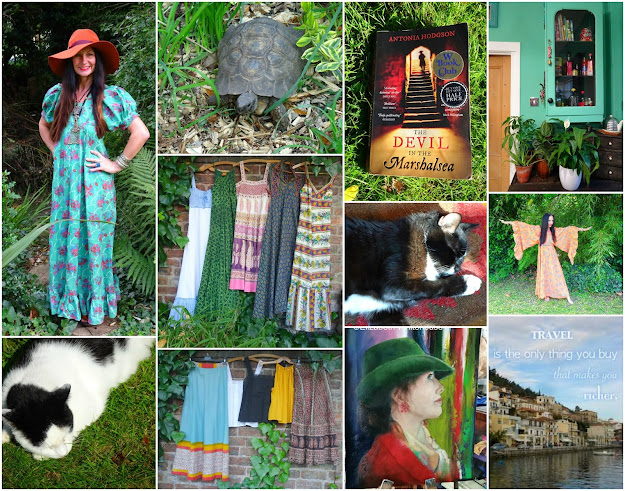 On Saturday (day 176) Jon got up first and brought me a mug of tea. We lay and read for a while, joined by the lads who were back from their adventures in the garden. Jon went downstairs and started on the sausages while I stripped the bed and loaded the washing machine. 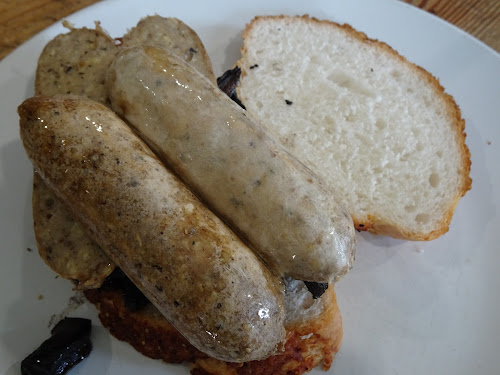 After our sausage & mushroom sandwiches we sat in the sunshine with our coffee watching Frank get off his tits on cat mint. Then I pegged the washing on the line and ironed my holiday clothes. 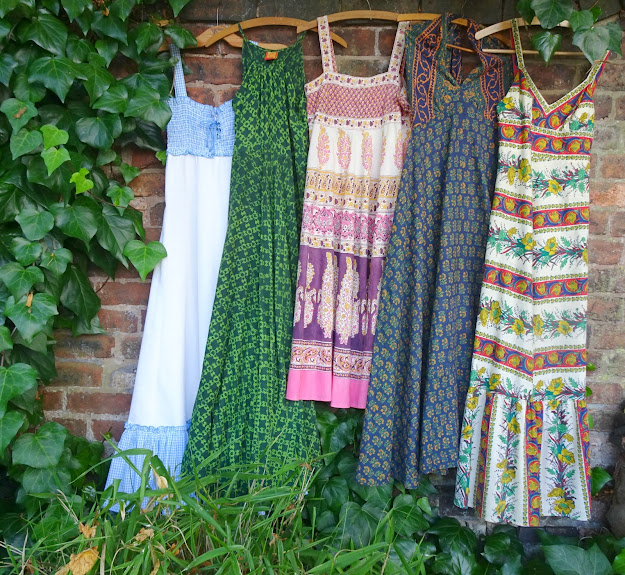 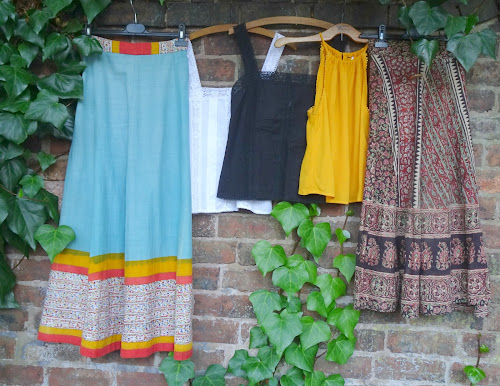 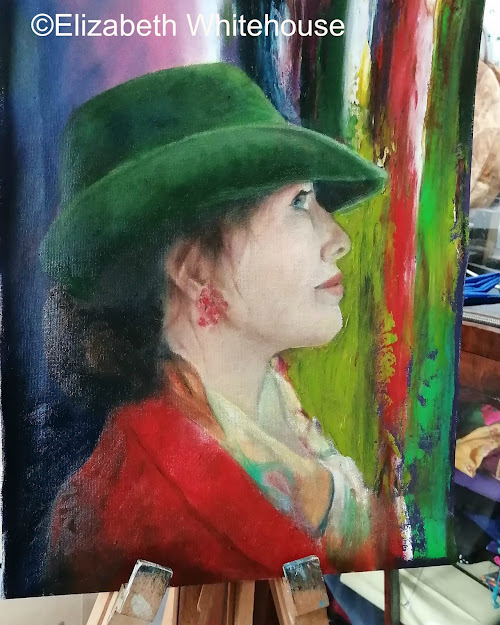 We drove over to Liz & Al's. They'd been away holidaying on the south coast for the past week and it would be our last opportunity to see them for a while as we won't be able to entertain visitors when we're back from our travels. As forecast, the day was glorious and we sat in the garden. Liz recently completed a self-portrait, resplendent in a vintage 1960s trilby she'd bought from us and, as part of a series, she needed me to pose in a hat, which was good timing, my roots aren't fit for polite company. 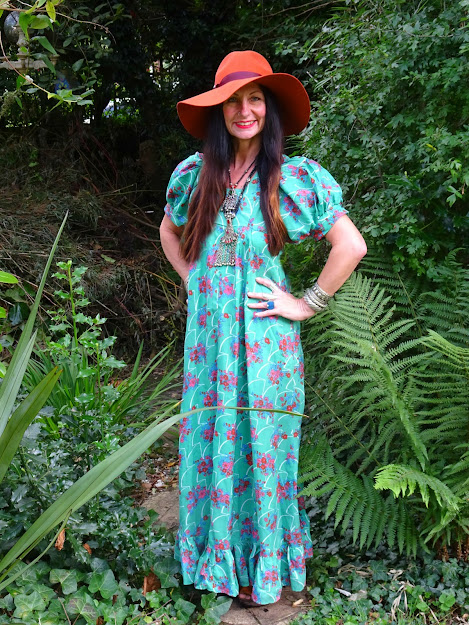 I wore another of my newly acquired vintage pieces, part of last week's stash from the attic. 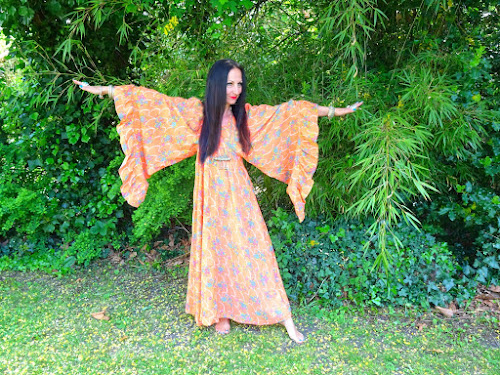 I thought the fabric looked familiar (a super light silk acetate), I bought a dress from a charity shop last year, it's the same. 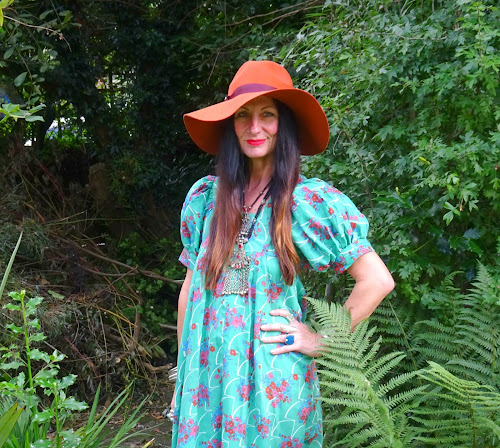 Back at home we changed into our gardening gear and got cracking in the garden, cutting down the agapanthus, disposing of any tomato plants that hadn't flowered & vigorously pruning the rest, pulling up the last of the lemon cucumbers and the disappointing courgette plant and moved some purple sprouting broccoli plants to the newly cleared area. 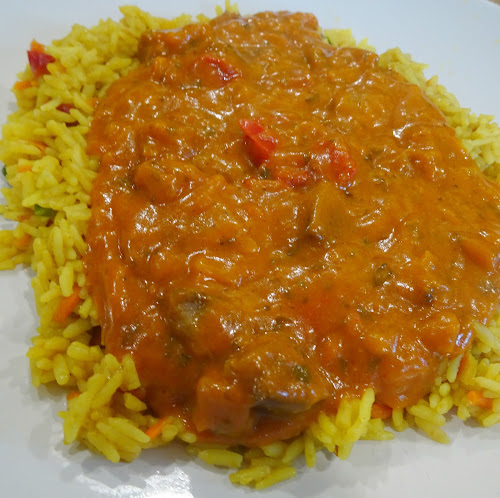 Jon made a veggie curry for tea. 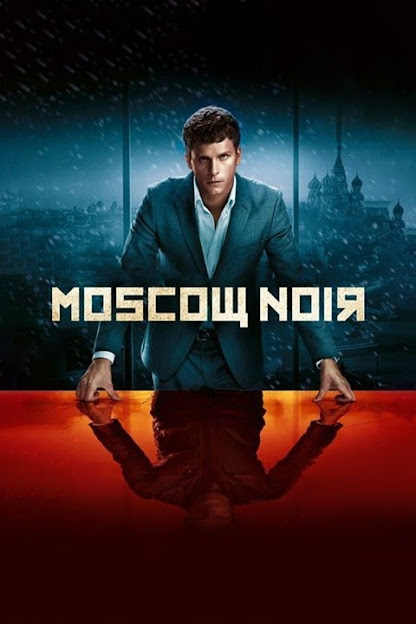 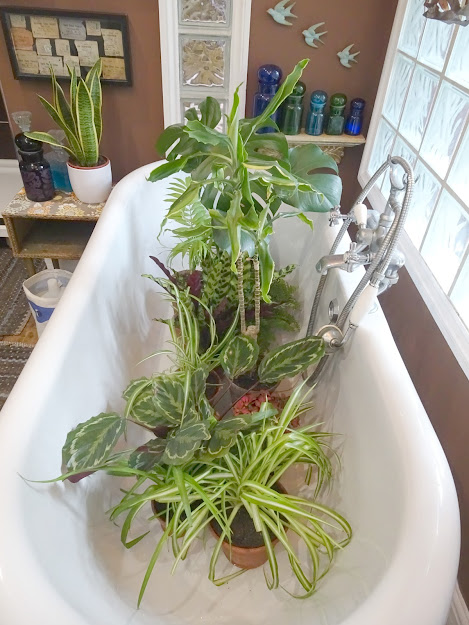 I was up just after 6am on Sunday (day 177) and it was already tantilisingly warm. I brought mugs of tea back to bed and we read for a while and cuddled with the cats. We had toast for breakfast and then I moved the houseplants, putting some in the bath and the others in the utility room sink and gave them a thorough soaking. There were a few of Shirley's apples still in the veg rack so I made us a small crumble for later and then did my six-weekly eyebrow & eyelash tint. 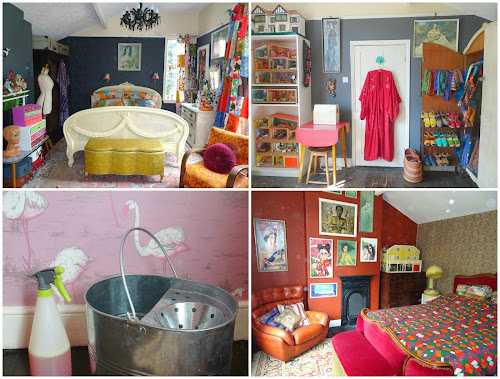 Jon sowed the grass seed he'd bought a couple of weeks ago while I swept the rugs and mopped the floorboards in our bedroom, the spare bedroom and the landing before pulling on my Diesel cut-offs and India Imports of Rhode Island sun top and joining him outside. 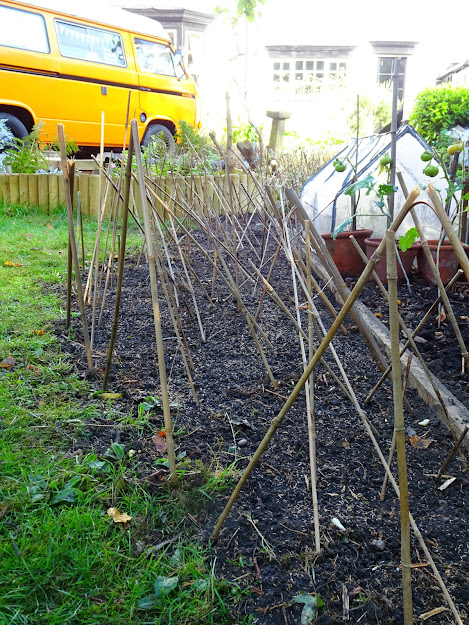 After lunch Jon sowed broad beans, radish, rocket, two varieties of lettuce, broccoli raab and mizuna leaves. I tidied the potting area and then stripped down to my bikini and spent an hour or so reading on the lawn before Jon sorted out my roots. While the dye was developing I gave the most of the houseplants their fortnightly Baby Bio feed, returned the kitchen ones to their usual positions & put the remainder on trays in the utility room to make it a little easier for our cat sitter, Michelle. 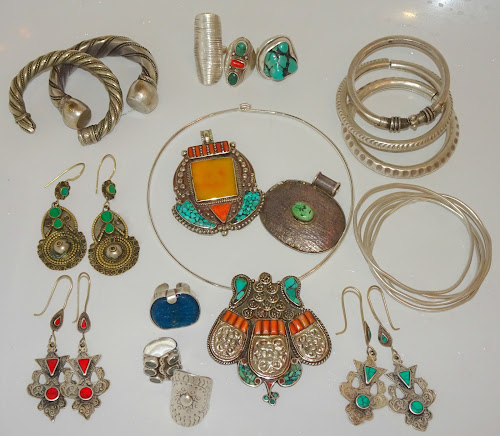 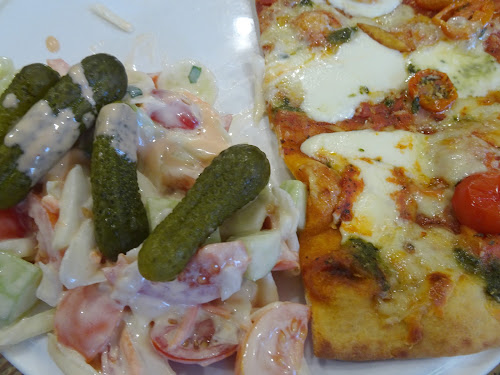 Tea was the other half of Friday's pizza with salad which included our homegrown tomatoes, lemon cucumber & basil.We watched Paul & Bob's Gone Fishing plus another installment of Moscow Noir and ate the crumble. 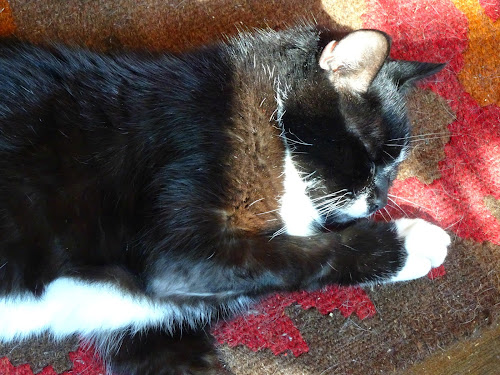 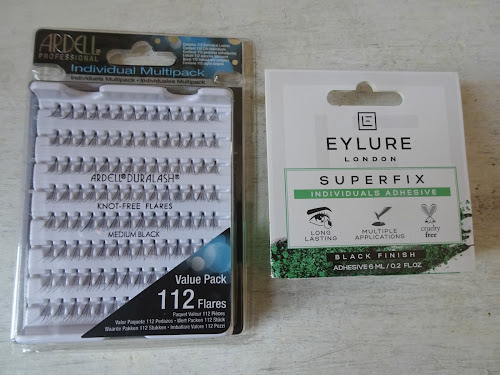 I popped a couple of homemade masks in an envelope for a friend, bought the postage online from the Royal mail and Jon whizzed them round the the post box on his way to stock up on cat food. Meanwhile, after sweeping the downstairs rugs, I applied my eyelash extensions which, with 6Music for company and the sun streaming through the bedroom window made for a wonderfully relaxed hour. 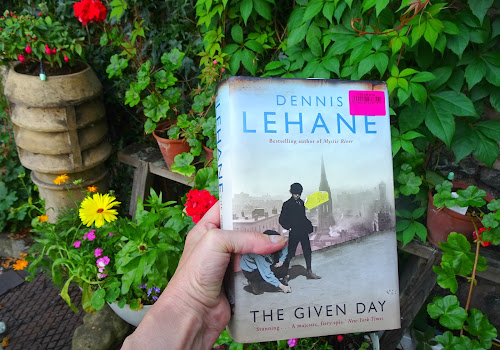 Jon repacked his stuff whilst I sat outside and finished The Given Day (bare nails and no jewellery, a very rare occurrence). When he was happy I added my stuff to the bag, we weighed it (17 kg - the allowance is 20 kg) and padlocked it to prevent any last minute panic packing. 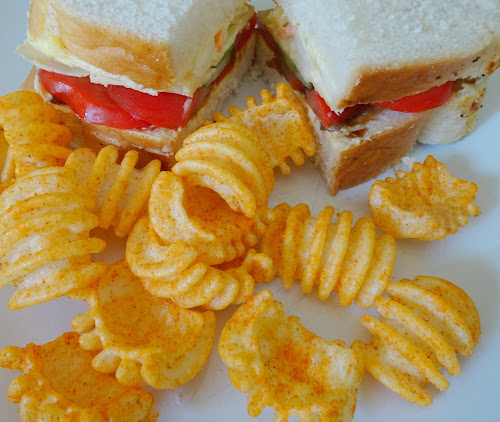 I cleaned the bathroom and the stairs and joined Jon in the kitchen for a salad sandwich - using up the contents of the salad drawer and some so-spicy-they'll-blow-your-head-off Cofresh chilli snacks. After lunch we put the plants back on the kitchen shelf and lay in the garden with the lads. 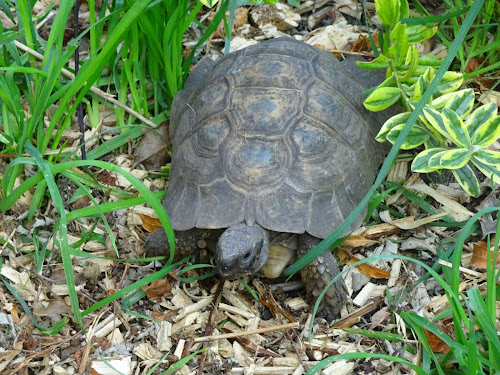 I started my next book, managing to get a third of the way through it in hardly any time at all. I'd noticed we had a bottle of beer in the kitchen so we shared it. The decadence, drinking at 3pm on a Monday afternoon! 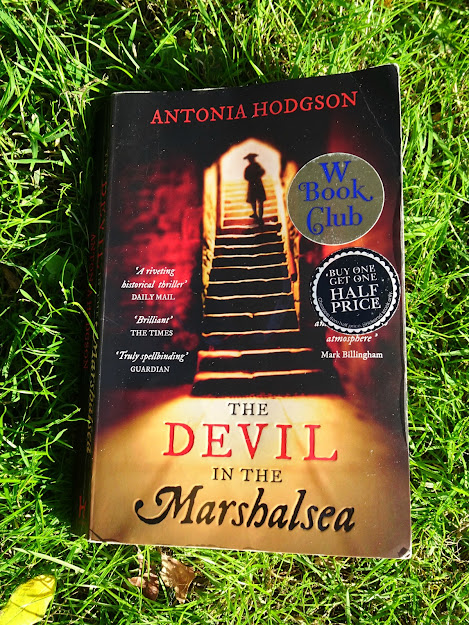 I won't be posting for a while - if you've followed me for a while you'll know I don't go near the internet when we're travelling - so expect to be bombarded with photos at the end of the month (although I won't believe we're actually going until the plane's taken off). 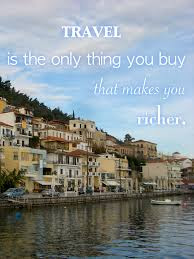 Thanks so much for reading, commenting and being such brilliant company over the last 178 days.
Take care, stay safe & see you on the other side.
Posted by Vix at Monday, September 14, 2020

Email ThisBlogThis!Share to TwitterShare to FacebookShare to Pinterest
Labels: Beauty, Block Print, Books, Charity Shopping, ebay, Food, Gardening, Greece, It's All About Me, Jewellery, Jon, Our House, Out and About, Outfit, Packing, Pets