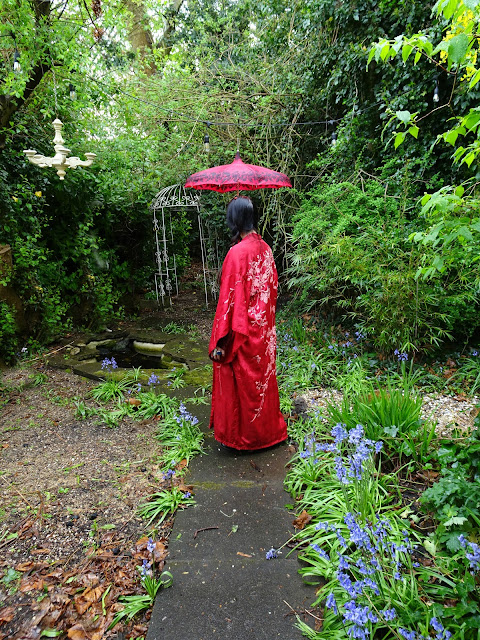 Day 40 was another soggy one, albeit with intermittent showers rather than the incessant rain of Tuesday. I was so cold the previous evening that I'd opted for a long soak in the bath as opposed to my usual shower, the first time I'd had a bath this year. We'd watched another episode of Museums in Quarantine, this time a tour of the Young Rembrandt exhibition at Oxford's Ashmolean, closed due to the pandemic. 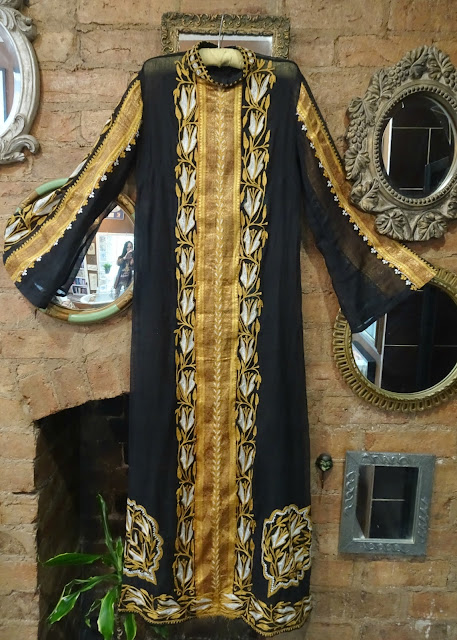 After Wii Fit, breakfast & a quick blog catch-up, I got dressed, opting for an embroidered 1960s Indian cotton-gauze kaftan by Ayesha (found on eBay last year), some Afghan Kuchi earrings and my vintage tooled leather lion's head belt (from the 3 for a £1 basket a couple of years ago). 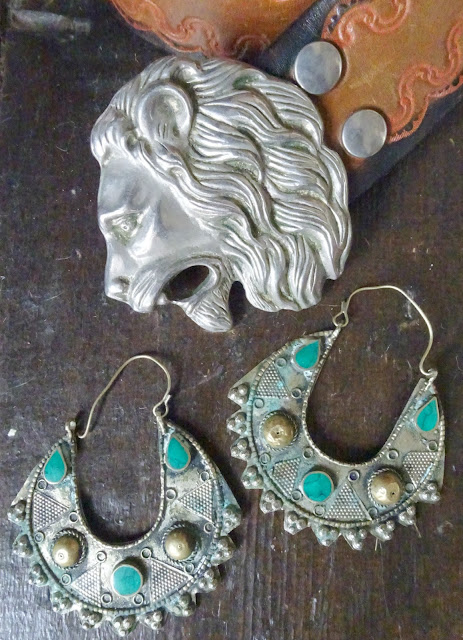 Jon braved the rain to fetch the compost from the greenhouse enabling me to repot the globe artichokes at the kitchen table. 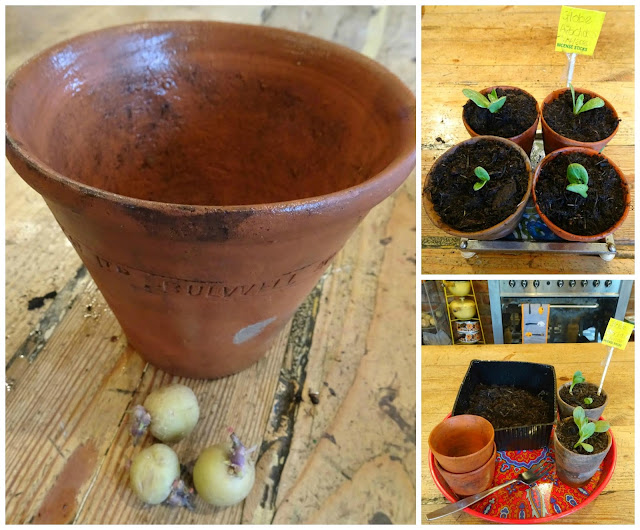 A couple of days ago I was sweeping the kitchen floor and discovered three new potatoes which must have fallen from the vegetable rack, rolled under the cupboard and sprouted so, as an experiment I potted them up to see what would happen. While I was at it I decided to repot our spider plants as well. Jon finished what he'd started on Gilbert yesterday, returned the compost to the greenhouse, reporting that both the beans & courgettes had shot up overnight.

After he'd emptied the bins (I can't believe it's been a fortnight since our collection), Jon suggested we go for a walk before our noodles so we had a brisk stroll around the block in the rain. 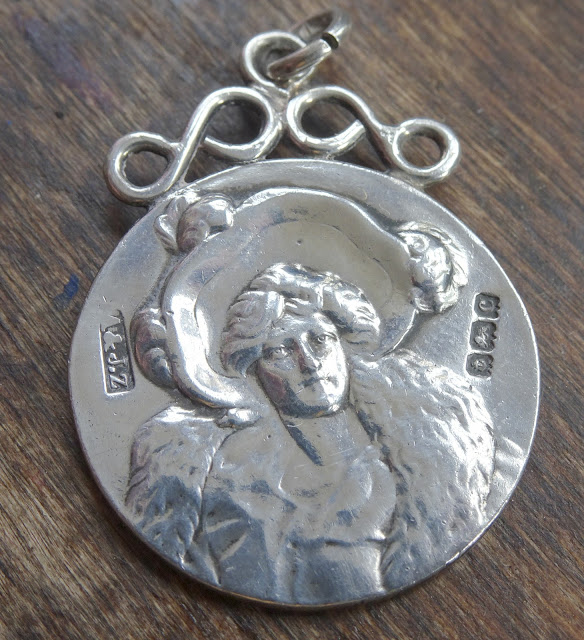 After lunch, I polished the pendant that had once been a button and looked up the silver mark online. It was made in 1902 by Arthur & John Zimmerman, silversmiths based in Regent Place, Birmingham and registered at the Birmingham assay office. Isn't she beautiful? 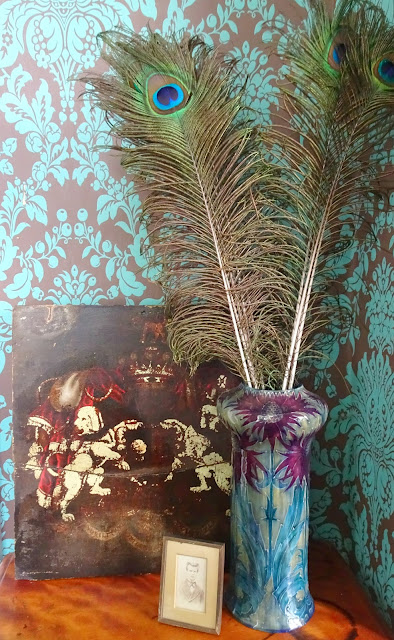 In the mood for a bit of restoration, Jon dug this out of the shed to attempt to strip off the varnish. It's the panel from a stagecoach door, bearing the coat of arms of General Thomas Grosvenor (1764 - 1851), who succeeded his father as Whig member of parliament for Chester. In 1820, following a snap general election triggered by the death of George III, an angry mob attacked Grosvenor's stagecoach, overturning it into the River Dee. 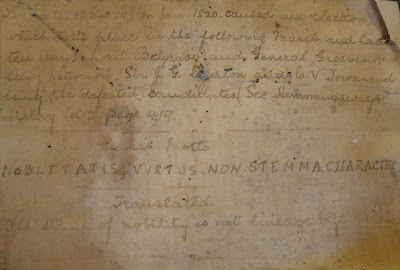 Mum's mum (my grandma Joan, who owned Stonecroft before we did) came from Chester where her great-grandfather retrieved the panel from the River Dee, shortly after the murder attempt, and it has remained in the family ever since. Years later, one of Grandma's sisters painstakingly researched Lord Grosvenor, attaching the information she'd unearthed to the back of the panel. 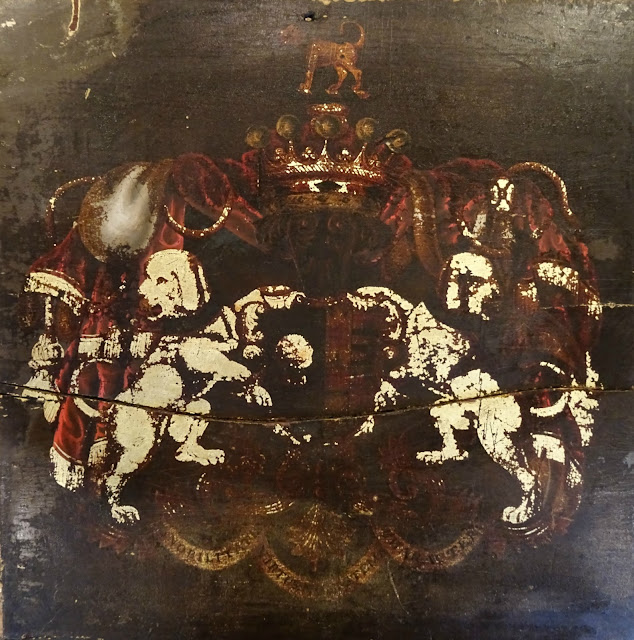 It isn't in the greatest condition but it's two hundred years old and spent time in a river, so it's hardly surprising really. 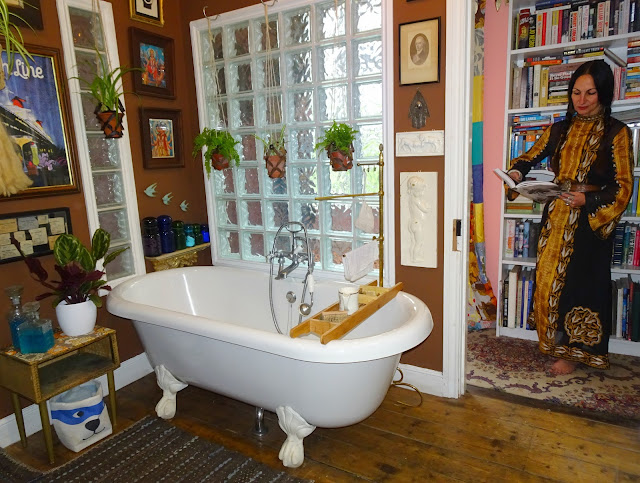 I dusted the bookshelves on the landing a few weeks ago but thought I'd attempt to tidy them up a bit - I didn't get far, I got distracted by a book. This isn't our only bookcase, there's a glazed Victorian behemoth in the dining room, a pile of paperbacks in each of our bedside tables and there's also my arts & fashion collection on top of my crafting cupboard further down the landing.

We're fairly disciplined when it comes to books, most of the paperbacks on our shelves are those we haven't yet read (or one of us has and thinks the other one would enjoy it.) Once they're read they normally donated back to the charity shop, at the moment they're piling up in the cupboard of doom.

I used to save any Indian themed novels to take when we travelled there, passing them on to fellow travellers once we'd read them. I regretted my actions far too often, wanting to re-read certain passages when we've actually been to the place they were set so that I now read them at home & I keep them. I don't know how many times I've read Shantaram, The God of Small Things & The White Tiger and if you've never read them then you really should. 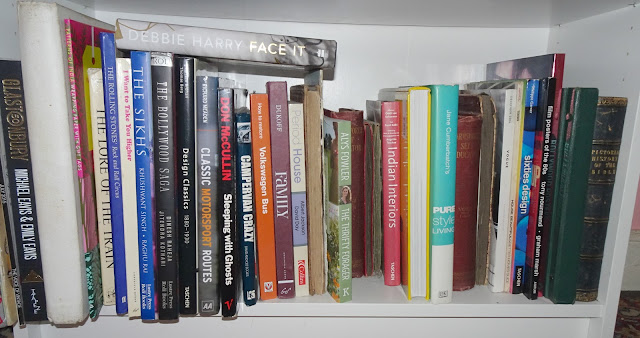 The Woman at Home book at the far left of the shelf was published in 1912 and is a selection of articles taken from the magazine of the same name. We found it in the parental home when we moved there in 1970, in amongst the belongings of the lady who lived there before we did. 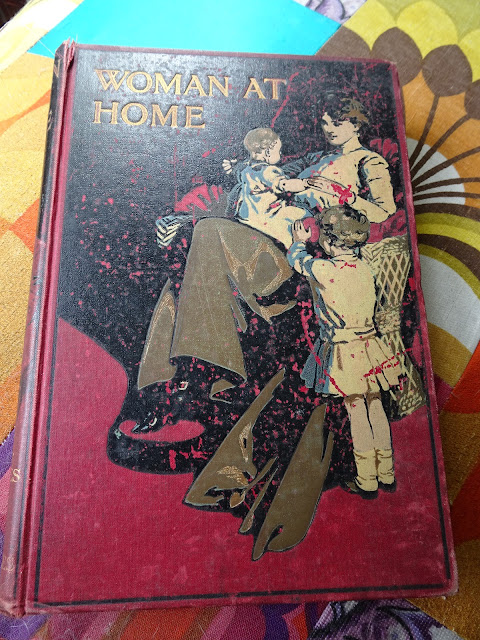 Even though it's been part of my life for fifty years it still holds me in thrall. The Edwardian Belle Epoque fashions are incredible and the articles fascinating, tips on holidaying in a horse-drawn gipsy caravan, interviews with the Russian royal family and Indian Ranis along with extracts from the diary of an Anglo-Indian housewife dealing with wayward servants - which I re-read this afternoon. 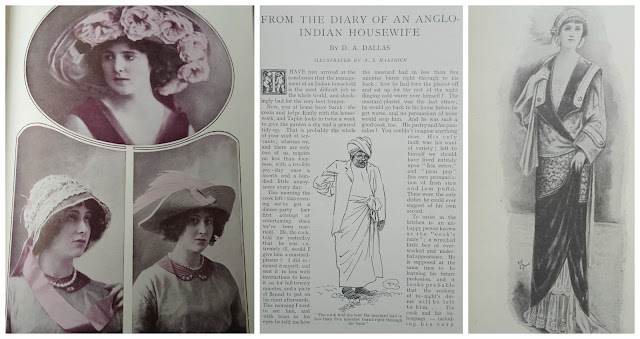 After a shower & pizza with salad, we retired to the lounge, opened the bar and watched Museums in Quarantine and The Great British Sewing Bee with our Wednesday night rum ration.


After my Thursday Wii Fit session, we had breakfast and watched the truly inspiring Captain Tom's 100th Birthday celebrations on the BBC. I then caught up with Blogland and got dressed. 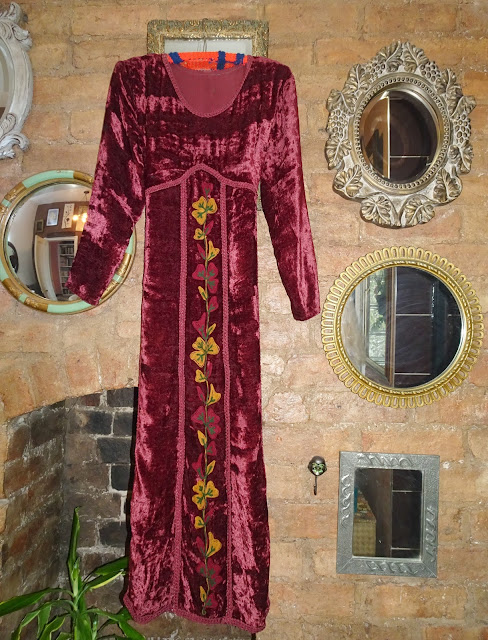 Day 41's lockdown outfit was a vintage crushed velvet embroidered maxi dress worn with some Vietnamese Hmong earrings and a pendant I bought in Goa a couple of years ago. 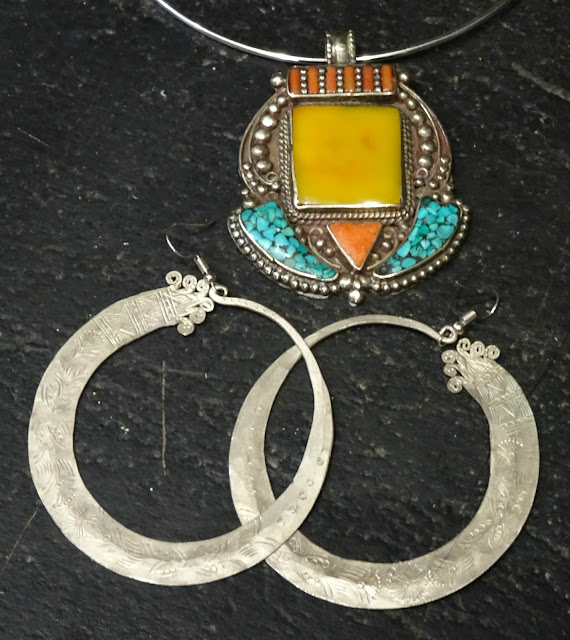 I swept the carpet in the middle room, pulled out the desk and scrubbed the radiator behind it. I can't remember ever cleaning it before, it certainly didn't look like I ever had! Tut, tut! On a bit of a cleaning roll, I swept and mopped the hall floor whilst I was at it. 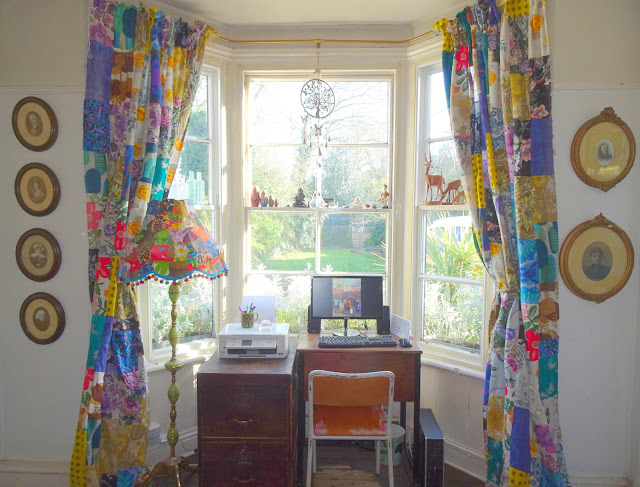 When I had a bath on Tuesday night I looked across at the wall opposite and wasn't keen on how plain it looked. I can't be doing with clean lines and uncluttered spaces, they depress me. 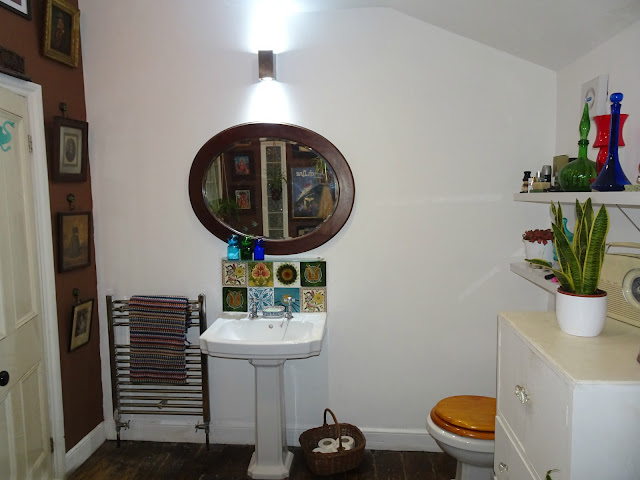 After a couple of drinks last night, inspiration struck, I remembered a Victorian picture frame we'd rescued from the parental home and a vintage Italianate gilt shelf I had stashed away in a drawer. 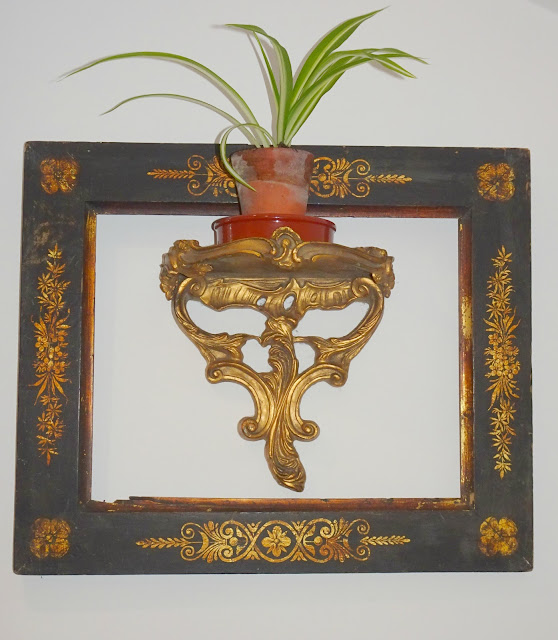 Combined with one of the spider plants I'd repotted yesterday, Jon made my idea a reality. 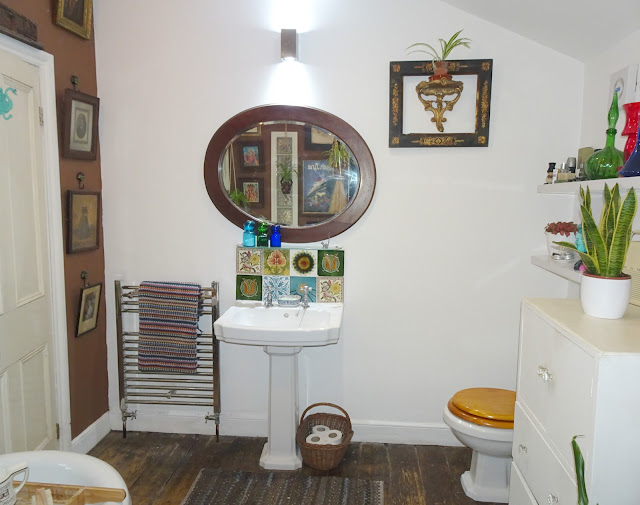 After a break for noodles, swathed in the 1920s silk kimono I'd wrapped myself in earlier as an alternative to switching the central heating on, armed with my vintage brolly I went for a wander around the garden. 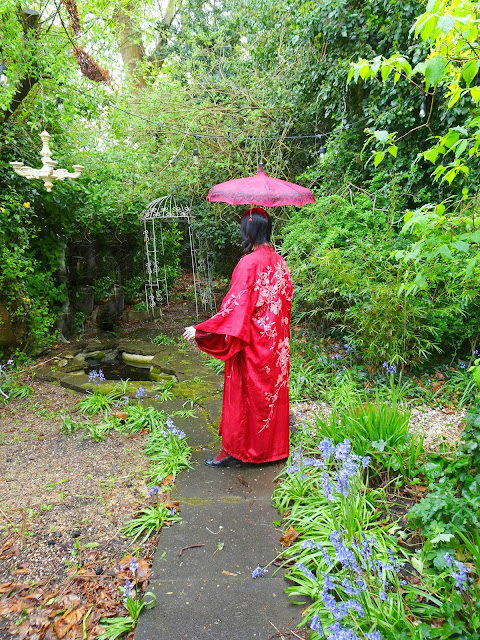 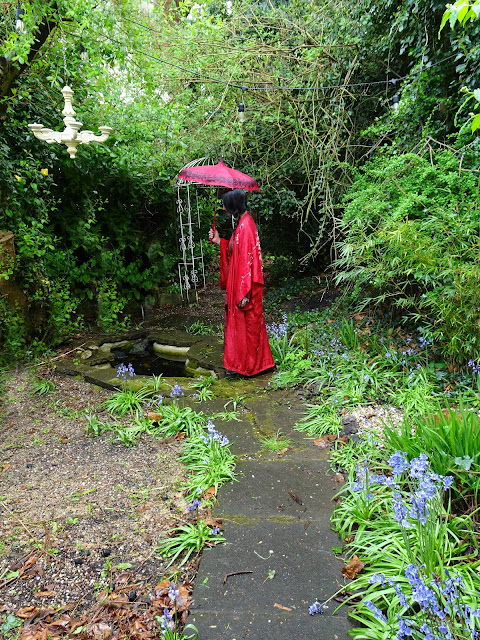 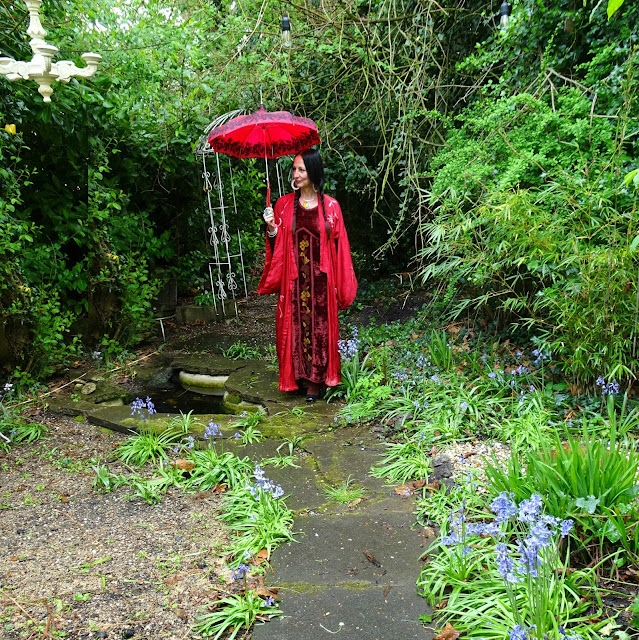 After a dry & sporadically sunny start, today had descended into yet another damp and dreary day. I know us Brits are mildly obsessed with the weather at the best of times but, with nowhere to go other than a quick walk around the block, a rainy day doesn't half impede one's activities. 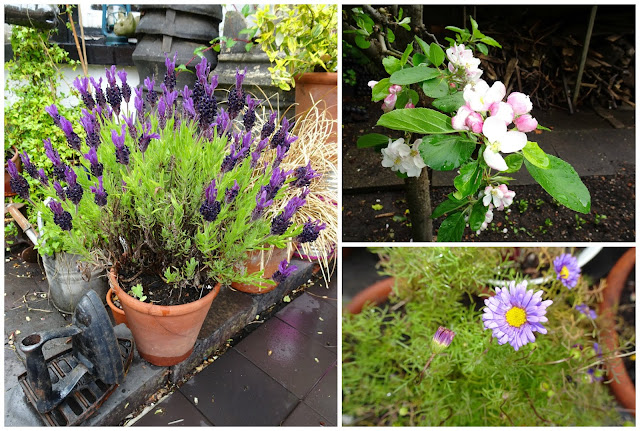 Still, as my elderly relatives always used to say, all this rain is good for the gardens. 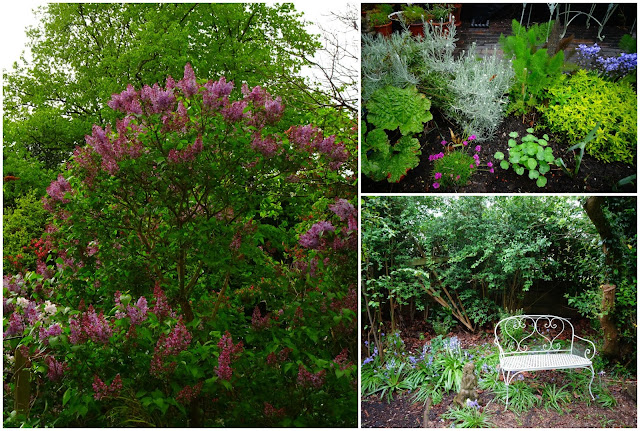 The skies may be grey but the shrubs, tubs and borders are blooming. 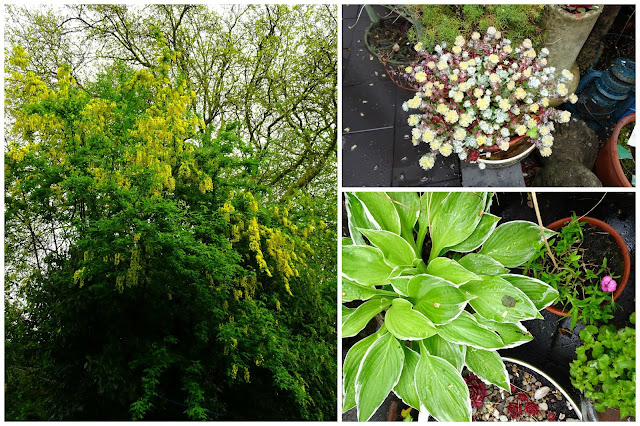 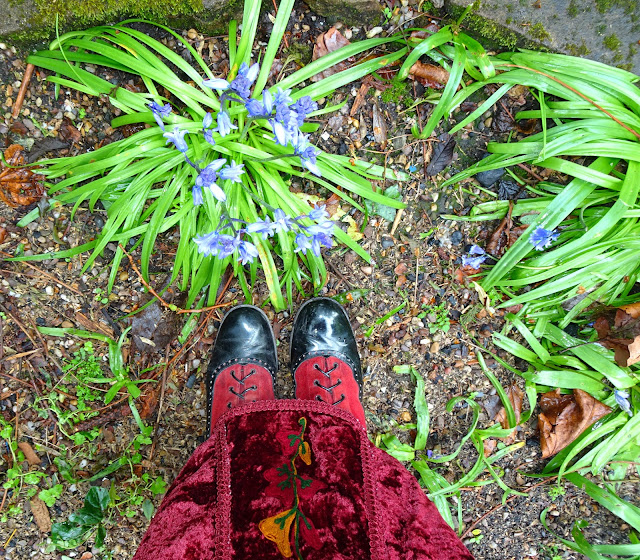 The plants in the greenhouse are coming along nicely, as well. Check out Jon's French beans (and his snazzy jumper). 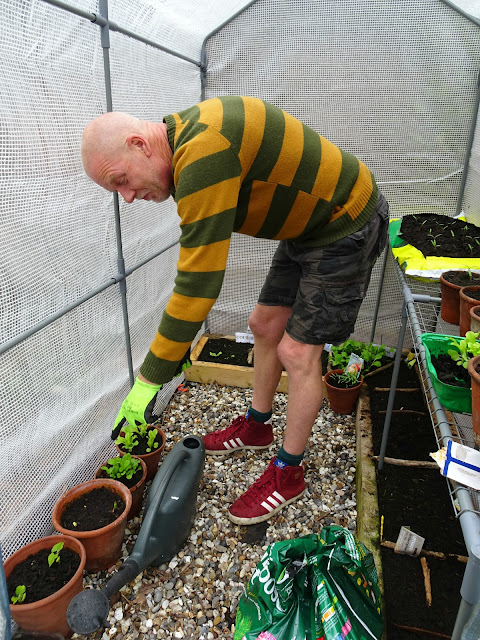 A lot of my blogging friends refer to our tortoise Jacob as a turtle*, if the rain continues he'll be in danger of becoming one!

*Tortoises and turtles are both reptiles but from different classification families. Tortoises are entirely land-dwelling whereas turtles live in water. 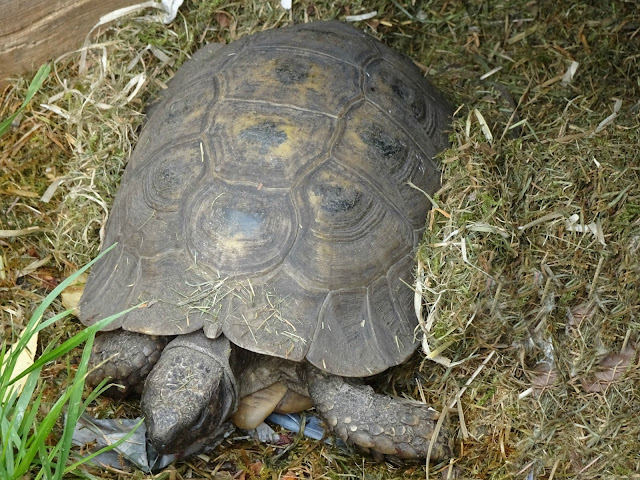 We've just got back from a walk around the block, timing it just right as the rain has started again. After a mug of tea to warm up, Jon'll crack on with making a paneer curry for tea.


Tonight - after clapping for our carers - we'll be watching the new BBC series of The Real Marigold Hotel where a group of well-known pensioners (including the fabulous Zandra Rhodes) check out retirement options in other parts of the world. They're in the former French colony of Pondicherry in Southern India, a place Jon & I liked so much that we visited twice (in 2006 and 2010). If you want to see it through the eyes of normal people, as opposed to wealthy celebs, check out my post HERE.