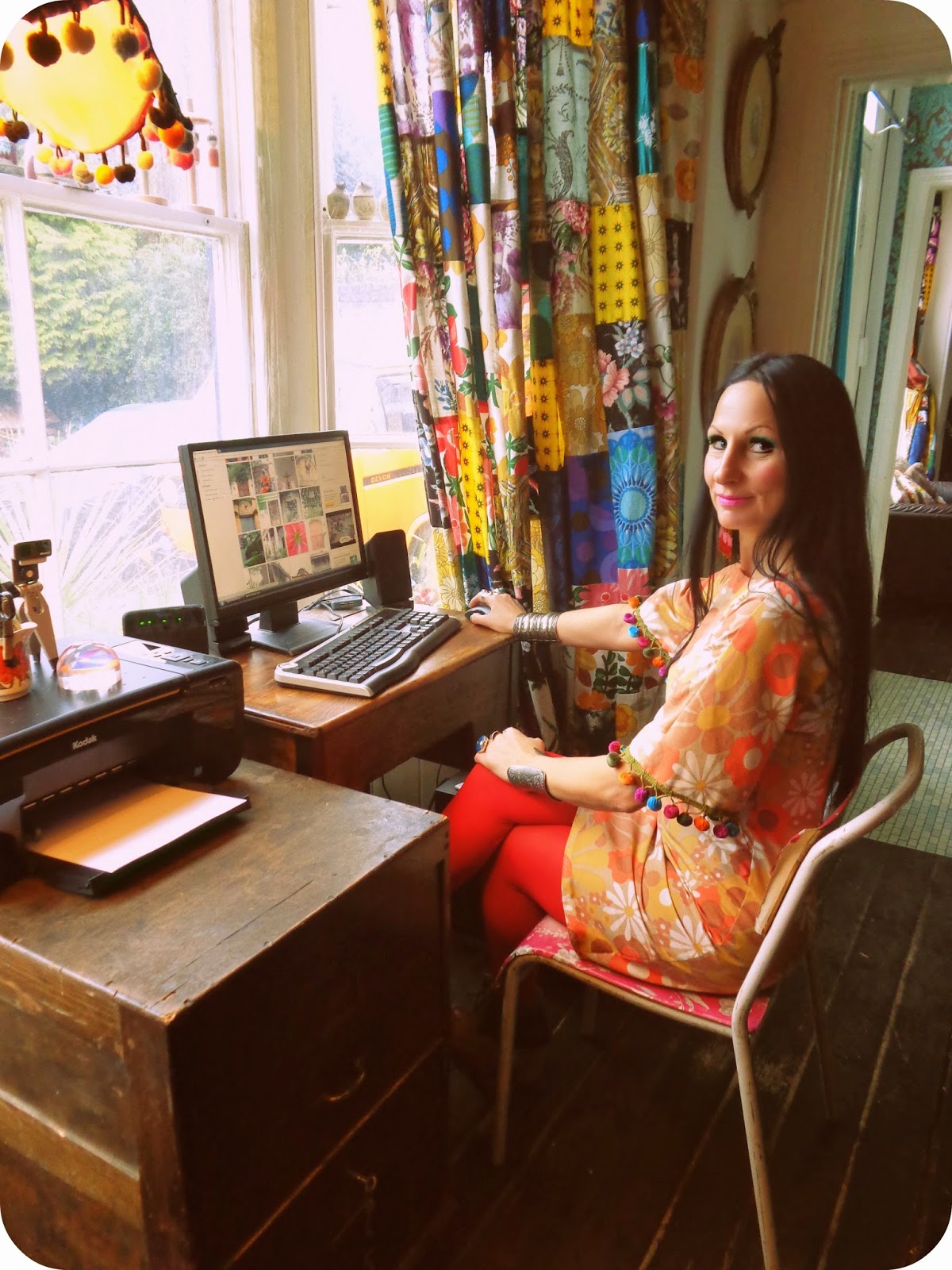 Hooray! I was so excited to rediscover some photos stashed away in my long-forgotten Photobucket account that I thought I'd bore you  share a few with you. A bit of an image heavy post I'm afraid, so do feel free to scroll through and just admire my pom poms if you're short on time. 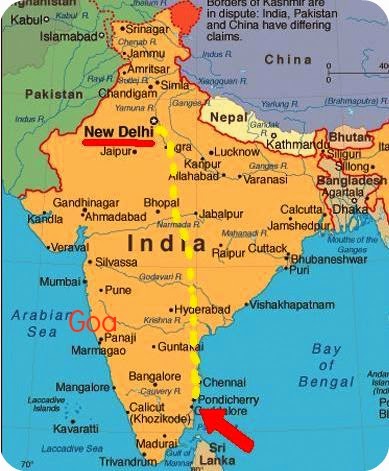 Gazing at a map of India years ago I fell in love with the name, Pondicherry. I did some research and decided that we needed to visit so we did, first in 2006 (for my 40th) and again in 2010. 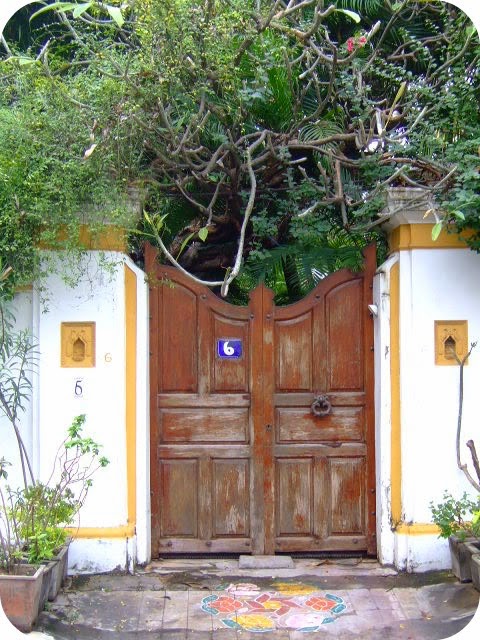 The Union Territory of Pondicherry was ruled by the French from 1674 until eventual re-absorption back into India in 1954. 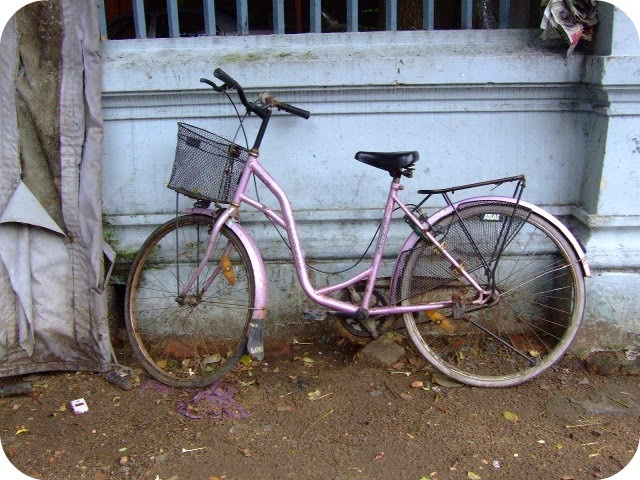 You may know it as the location for Yann Martell's Life of Pi. 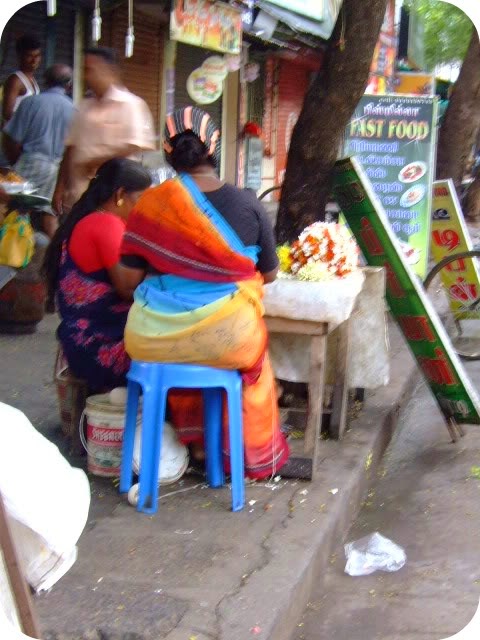 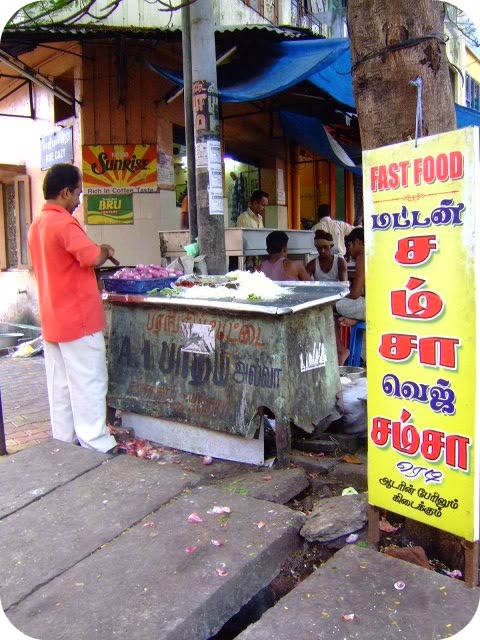 But cross the river and the other side remains forever French, wide leafy boulevards, gendarmes directing traffic in kepis and white gloves, blue enamel street signs & restaurants with baguettes, croissants, steak and fine wines on the menu. French is still widely spoken and visible on street signs. Like Goa, beautiful houses waste away, locked up and abandoned due to complicated inheritance laws. 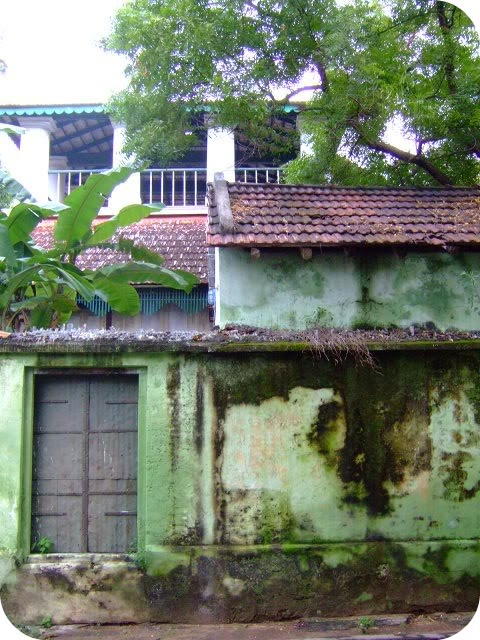 Several have been reclaimed and turned into exquisite boutique hotels.

Did we stay in one of these beautiful establishments? Us?! Why pay £100 for a room when you can enjoy the same view for £6?

We chose the inappropriately named Qualithe Inn, a shambolic 18th lodge overlooking the Presidential Square.
The Indian equivalent of the dodgiest British pub ever, at 13p for a quadruple rum, the place is littered with drunken casualties, patrons and staff alike. We'd find ourselves locked out and have to climb through a downstairs window when the receptionist was too wasted to remember we weren't back and our sleep was frequently disturbed by the manager banging on our door asking Jon to go drinking with him. 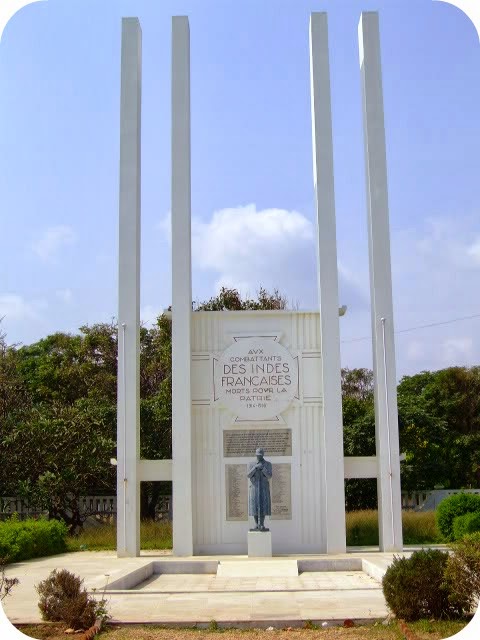 The days were spent exploring around the city, joining organised walking tours run by well-informed locals or chilling in the Art Deco cafe on the sea front sipping pastis and watching the world go by. 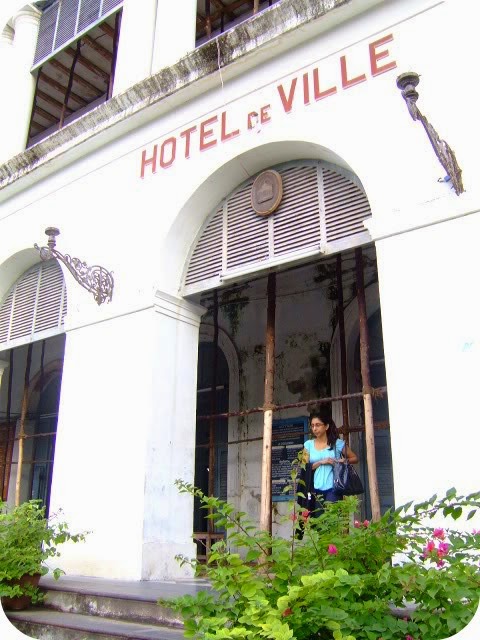 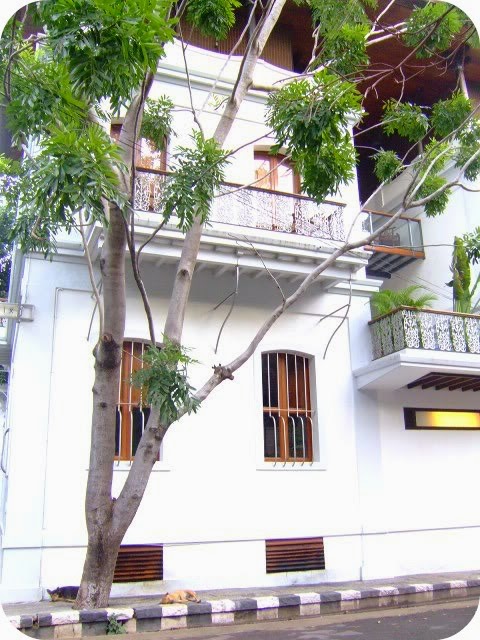 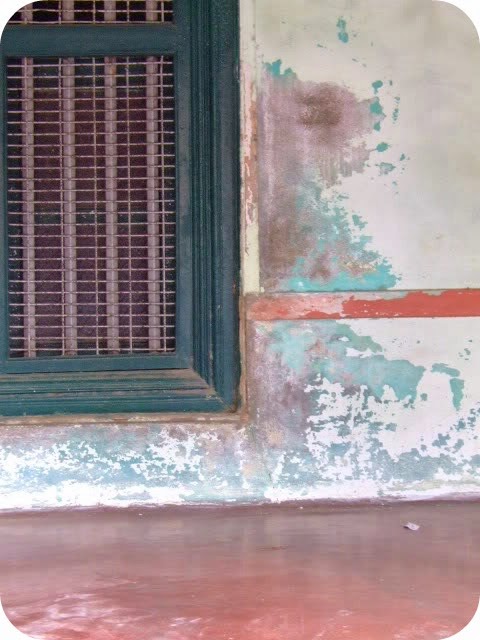 Pondicherry still bears the scars of the 2004 tsunami, which made 30,000 people homeless and killed 104. 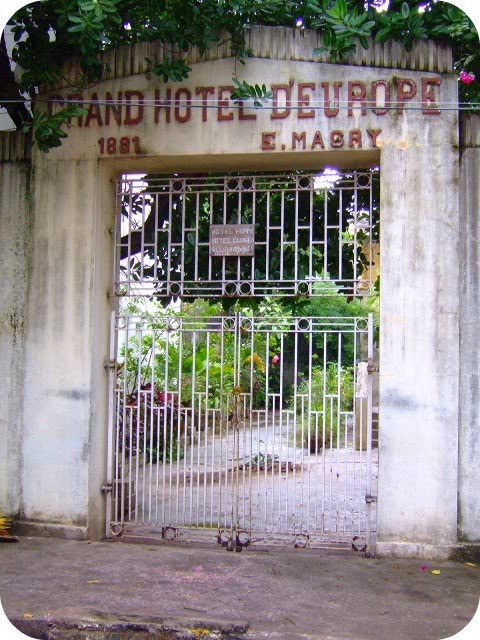 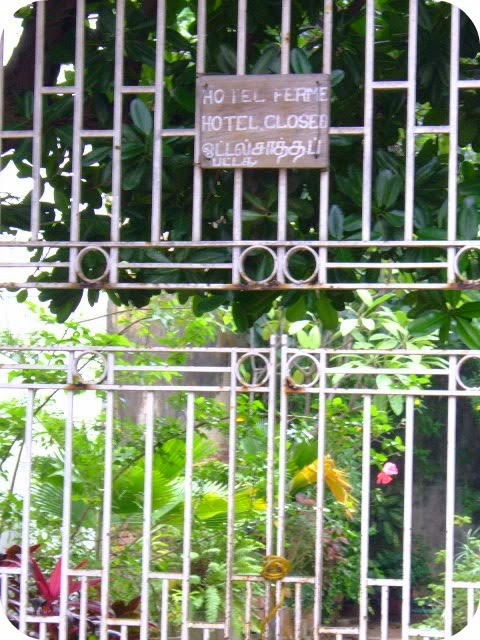 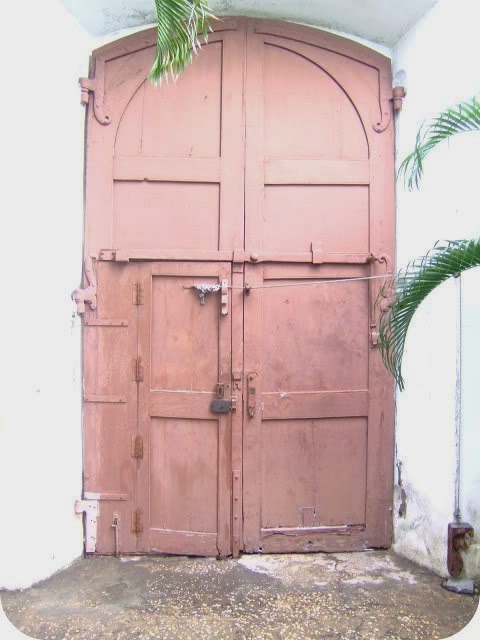 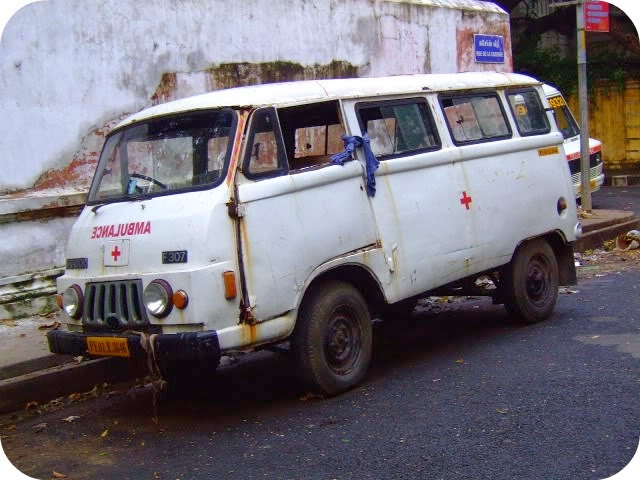 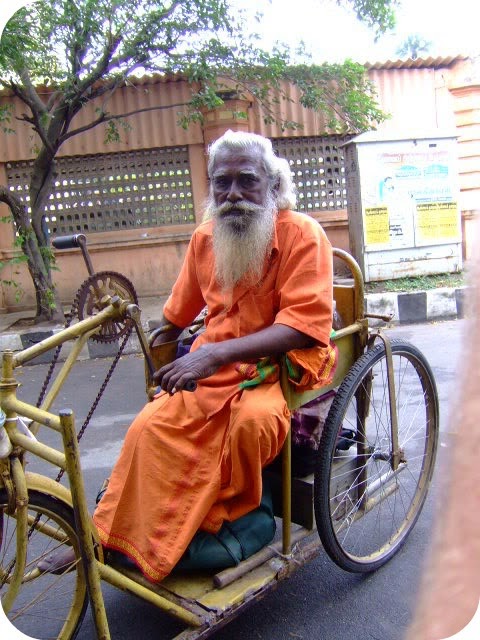 Another time we took a bus to the Auroville Ashram, the utopian society set up in the 1920s by an enigmatic French woman known as The Mother and Shri Aurobindo, a Tamil Bengali freedom fighter (thanks, Tanaya, no excuse, I've read his memoirs) . The Matrimandir (Sanskrit for temple of the sacred mother), where the chosen few can meditate, reminded us of something from Star Trek. Read more about it HERE. 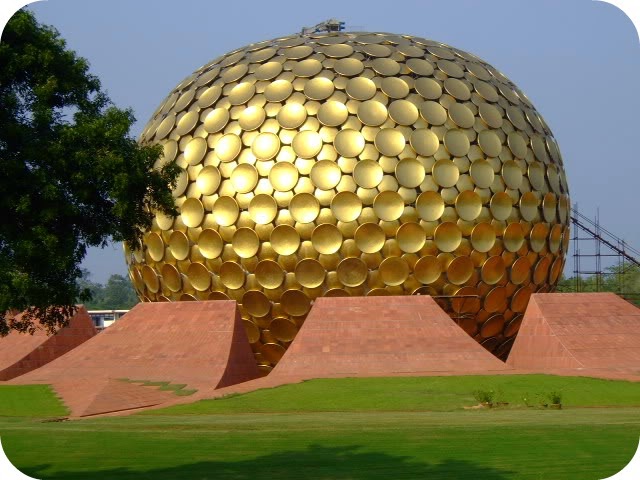 The domestic tourists on the bus were far more interested in capturing us than the sights of Pondicherry. Whenever the bus came to a halt we were instructed to stand in front of various monuments and smile. Jon & I adorn hundreds of holiday albums throughout the subcontinent. 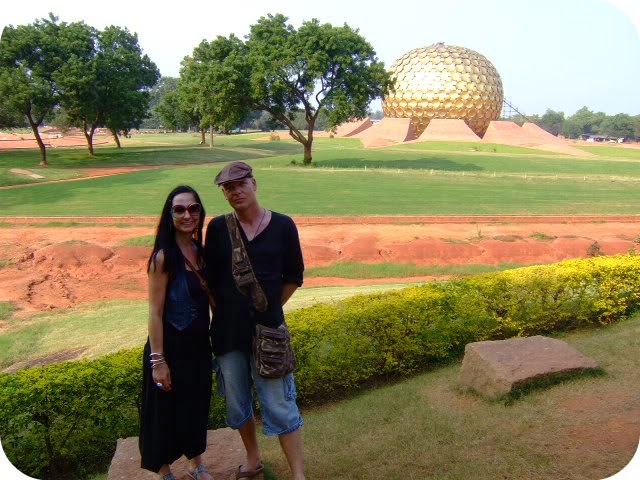 If you haven't read (or seen) The Life Of Pi then do, its wonderful, although it was actually based Trivandrum Zoo in Kerala (and that's another post). A House In Pondicherry is another must-read if you're interested in discovering more. To get there you'll need to fly to Chennai (Madras) airport, Pondi is just a short ride up the coast.

Hope you enjoyed your trip.
See you soon!
Posted by Vix at Wednesday, March 26, 2014