Do or DIY - The Bathroom Makeover 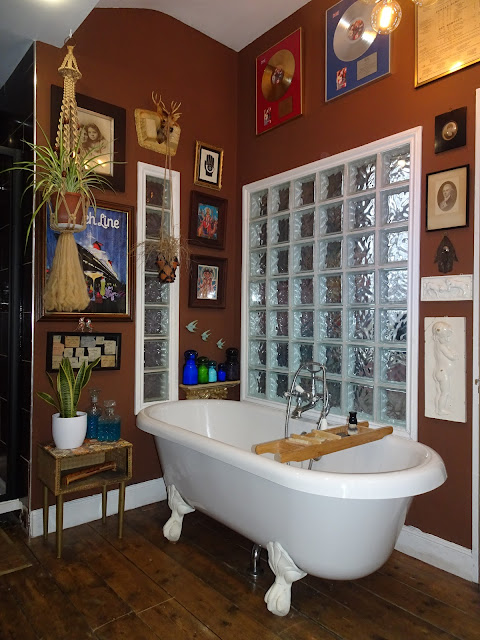 If you've been following me for a while you probably won't see much difference after our recent bathroom re-do. Other than Jon refitting the shower very little has changed, the walls have been repainted in a similar shade of chocolate brown, the wood floors are still stained with Jacobean Oak and, as ever, there's a random selection of artwork, family portraits and stuff we've found on our travels adorning the walls. When you don't follow fashion and you already know what you like there's no reason to change just because the style magazines try to convince you otherwise. 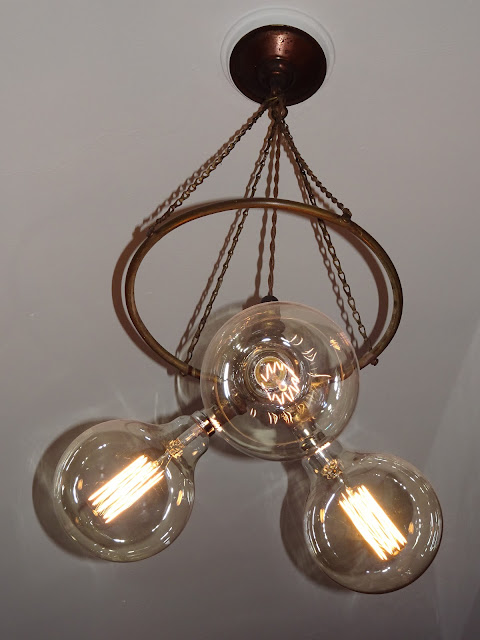 The light fitting is new, that is, new to us. The brass frame and chains came from the Edwardian light fitting that had hung in my parental home since 1912. It did have an amazing white opalescent shade which unfortunately came to a sticky end a few weeks ago when I was tidying up. Oh dear! Mind you, I think I prefer the exposed retro light bulbs Jon found on eBay. 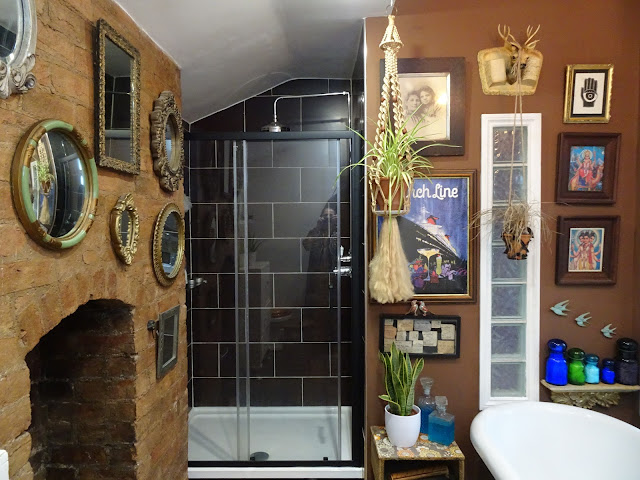 The shower tiles (wood effect ceramic floor tiles bought for a pittance in 2005) haven't changed, it's just the shower fitting and glass doors that are new. The shower head is double the size of the original, back in 2005 chrome fittings were just becoming fashionable and cost so much we could only afford a titchy one. Now they're mainstream and a fraction of the price so we've bought the biggest available.

What self-respecting musician doesn't hang their gold and silver discs in the bathroom? Those are Jon's from his Charlatans days. Here are my 18th Century ancestors James and Sarah Cook (on my Mum's side). The brown wooden sign comes from a Victorian tram (Seats for 21 Passengers Inside), I paid the princely sum of £2 for it from a car boot sale in 2017. 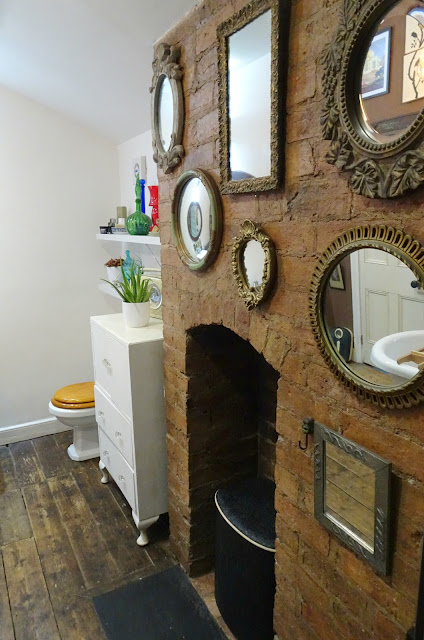 When we moved into Stonecroft the bathroom was downstairs. Jon converted the upstairs loo, part of the landing and Mum's childhood bedroom into a bathroom using glass bricks and a stud partition wall. While he was stripping the ruined plaster from the walls ready for re-plastering he uncovered this fireplace which had been back-filled with rubble and boarded over. It was as much as a surprise to my Mum as it was to us and she'd lived there since 1952. It's hung with vintage and antique mirrors we've found on our travels. The 1950s vinyl laundry bin came from a charity shop. 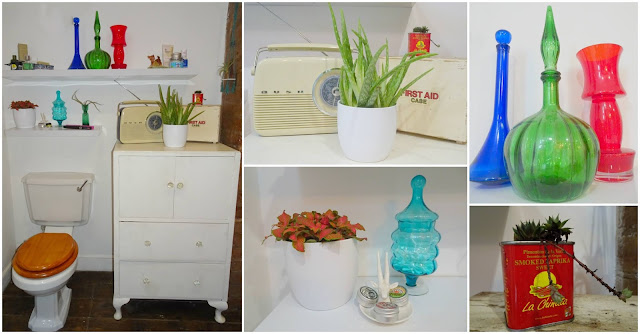 The floating shelves are new and - shock, horror - from a proper shop! The wooden cabinet used to be in our bedroom. It was £2 from a car boot sale and covered in cream gloss paint with ugly yellowing Bakelite handles. The seller was so happy to be rid of it that he insisted on making his son carry it to our car! We stripped it, painted it white and added some vintage cut glass handles bought from a flea market. I'm sure I don't need to tell you that the Mid-Century art glass, retro Bush radio, first aid kit and various ceramic odds and ends all came from charity shops. 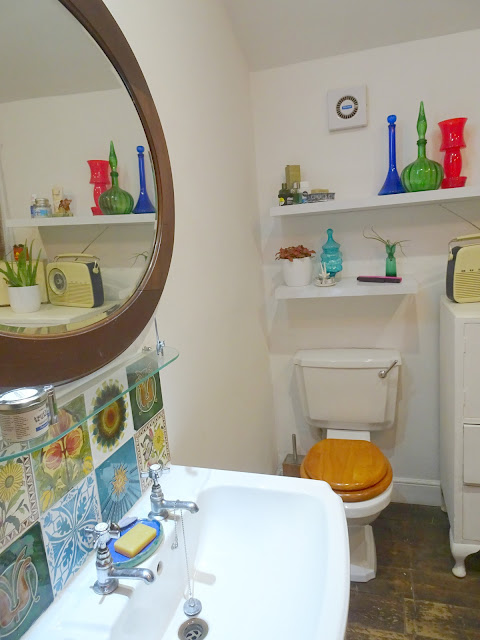 The Edwardian mahogany mirror has hung over the sink since 2005. It was originally in my Grandpa's - and now our - bedroom. The Victorian tiles are from my collection. The basket holding the loo rolls and the 1950s Salter bathroom scales are charity shop finds (where else?) 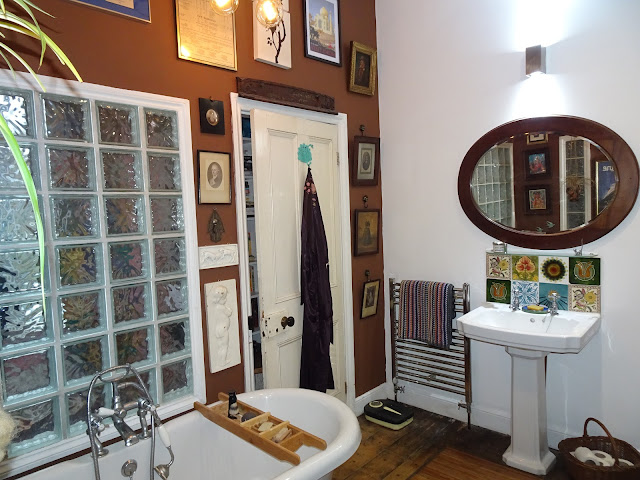 The dragonfly soap dish was discovered in the bathroom of my parents' house when they moved there in 1971. It was made by Royal Doulton and given away free with Wright's Coal Tar Soap over a hundred years ago. A few years ago its twin turned up on the Antiques Roadshow and was valued at around £120! 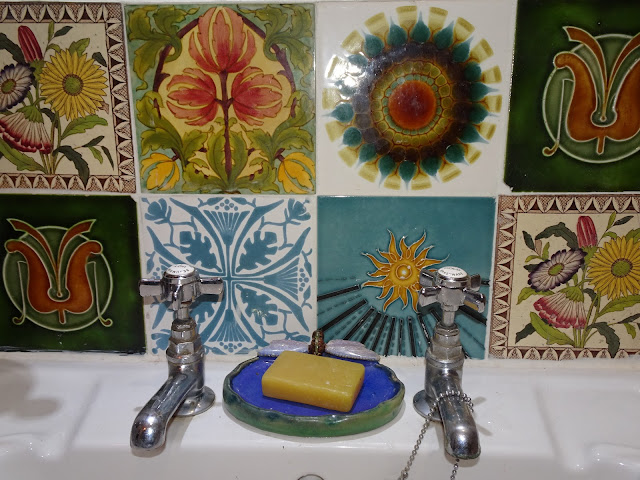 Spider plants seem to thrive in the bathroom despite the room having very little natural light. The macrame hanger was £3 from the charity clearance shop in the Autumn and Liz made us the smaller one from some salvaged vintage leather and garden twine. 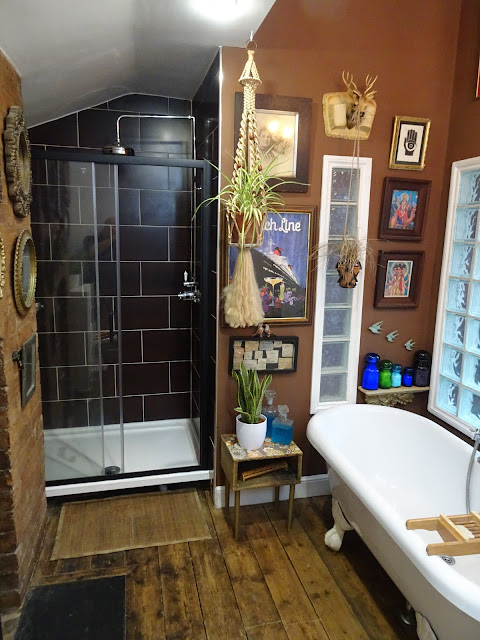 More dead relatives! The watercolour of lady with the freakishly small feet is my I don't know how many times great grandma (dated 1820), the handsome chap with the 'tashe was my Grandma's father, William Thomas Crosby, a womanising bastard by all accounts, the naive looking portrait in the gilt frame is inscribed Chester, 1854 so another relative on my Grandma's side of the family - his hat is adorned with a peacock feather so I'm wondering if he had an Indian connection (in my dreams!) 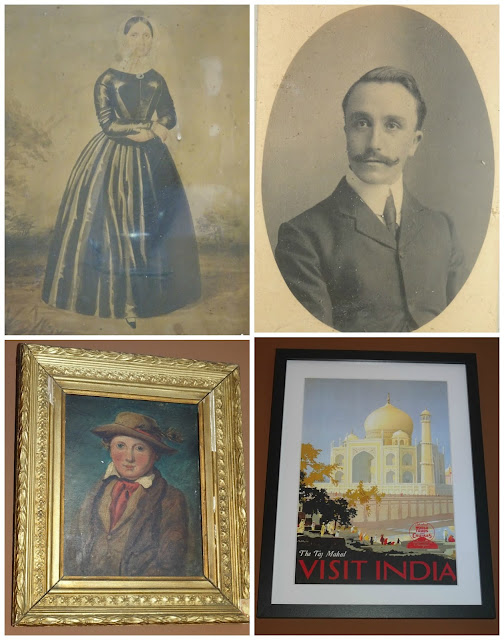 Jon bought me these 1930s cinema stubs originating from British India and many years ago and framed them for me. The fake crystal decanters and Lloyd Loom bedside table were jumble sale finds almost a decade ago. 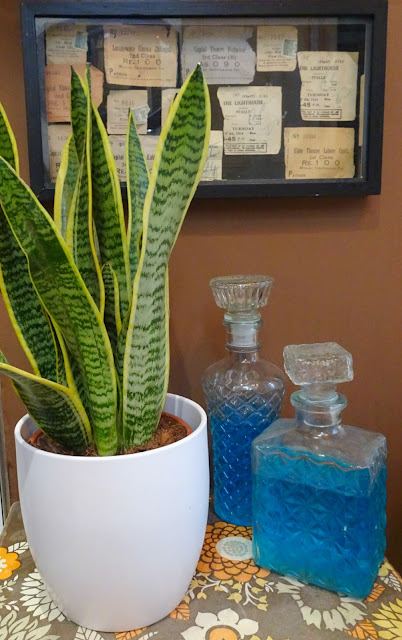 If you're interested, the walls are painted in Wilko's own brand, Nutmeg Spice. The paint we'd originally used had been discontinued but this turned out to be the perfect match and a lot cheaper, too. 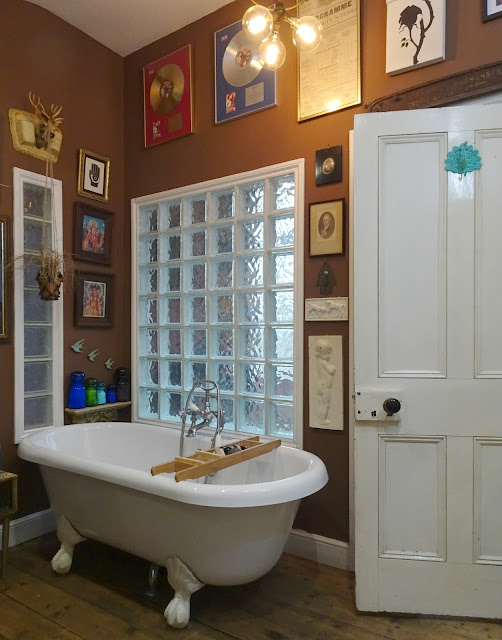 Once our rugs arrive (tomorrow, according to this evening's email) we can finally say that the bathroom is finished....yay!

See you soon with - hopefully - my holiday packing post.
Posted by Vix at Monday, January 06, 2020