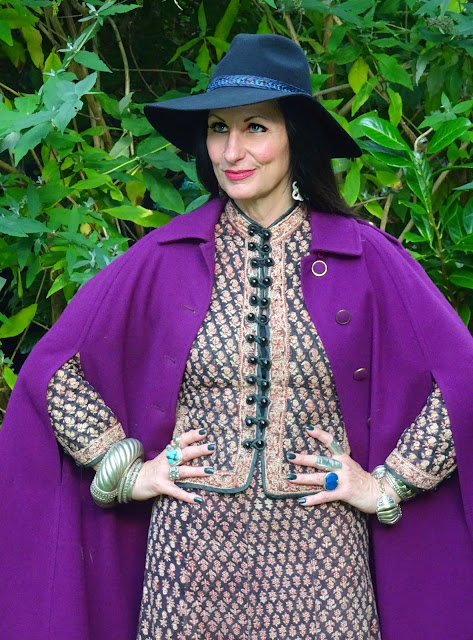 In a fashion system that operates on disposability, where we’re told that beautiful garments have trend-based expiration dates, keeping our clothes is a revolutionary act. The global movement, Fashion Revolution, who campaign for greater transparency in the fashion industry, say that the only antidote to a throwaway society is to keep. 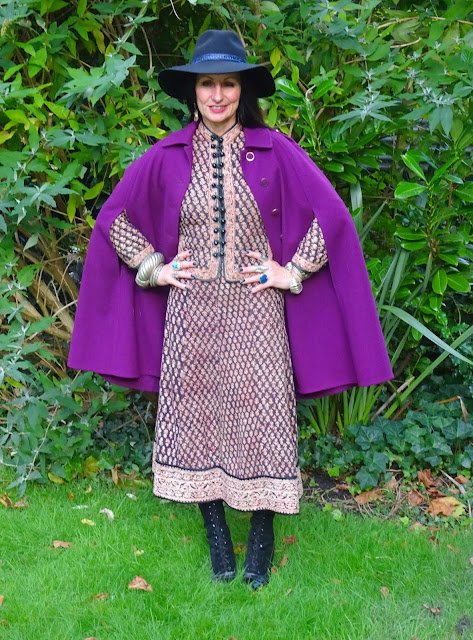 By wearing my 1960s Wetherall of Bond Street cape I'm doing just that. I bought it from a charity shop almost 20 years ago and its been a regular fixture on my blog for over a decade. As capes come in and out of fashion with alarming regularity, the way it's regarded when I wear it differs according to current trends, sometimes it's stroked and swooned over and at other times I'm subject to many an odd look.  Do I care? Of course not, I'm a revolutionary!

Although I'm wearing two items of clothing that are new to me, they're not new new. The early '70s Indian block printed suit by Phool came from a fellow vintage trader and the black wool trilby, originally from high end British clothing chain Reiss, was listed for sale on line at a fraction of the retail price by a lady who'd bought it in error and never got around to returning it. My entire outfit cost less than the original purchase price of the hat. 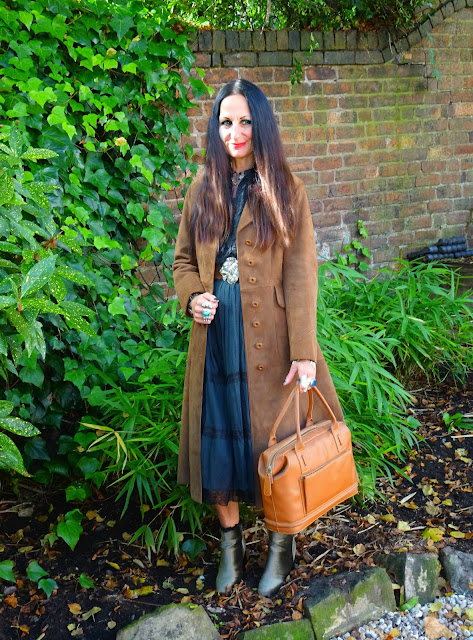 I couldn't help myself. On Wednesday I made the mistake of trying on Monday's chazza shop find, the late 1960s Suede & Leathercraft coat and fell in love so I've decided to hold on to it for a while before it goes into the stockroom. The beauty of selling vintage clothes is that everything has already had at least one previous home so another owner only serves to add to its already rich history.

Underneath my newly acquired coat is a vintage cotton dress by Interlinks, London (a company that supplied British boutiques with imported Indian-made clothes in the 1970s & 1980s) and last seen on my blog HERE. The River Island velvet ankle boots & 1970s tooled leather belt with a lion buckle were both charity shop finds. The 1950s leather bag was a 50p jumble sale buy years ago. 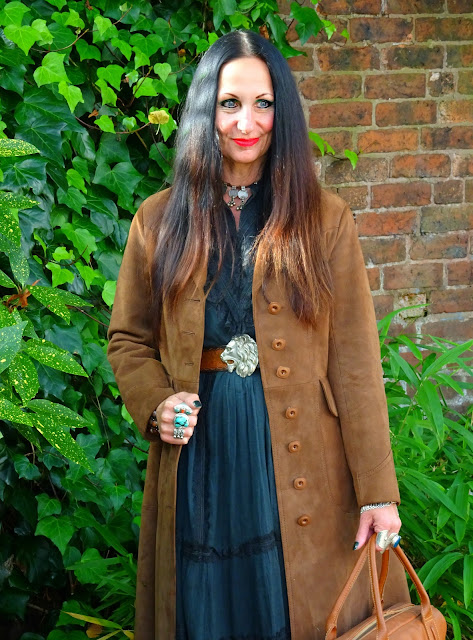 My hair seems to be changing by the day! I haven't dyed the length (only the roots) since December and I quite like how the colour has lifted. I was horrified to discover that Lush had discontinued the Karma shampoo bar I've been using for over a decade and bought a cheaper non-Lush one to eke out my remaining bar. It was awful, leaving a sticky residue on my hair that I couldn't shift. When Jon commented that my hair looked clumpy & weird it was the final straw. After persevering for over a month I had to admit defeat. I've got enough Karma to last another month or so then I'll just order another of Lush's shampoo bars - it's false economy to mess around looking to save a couple of quid. 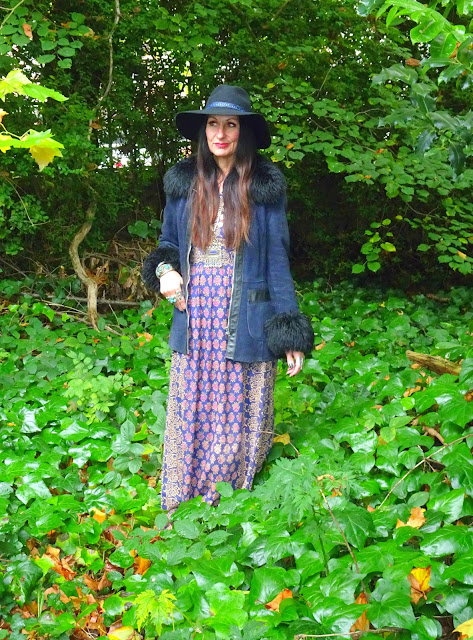 Here's proof that us Brits don't need to swap over our wardrobes according to the season, I last wore yesterday's outfit back in June (albeit with a different hat), sheepskin-trimmed suede jacket and all! In fact it was so cold that day I was reduced to wearing the dreaded tights - something I've not been forced to succumb to yet! 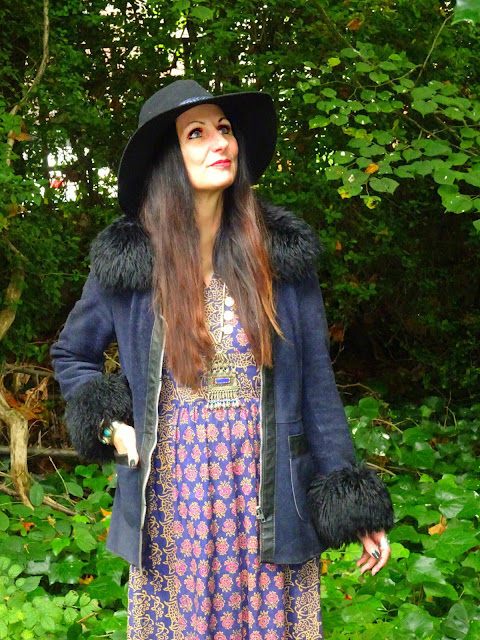 We've been doing more charity shopping since I last posted. Here's what we've picked up since Monday. 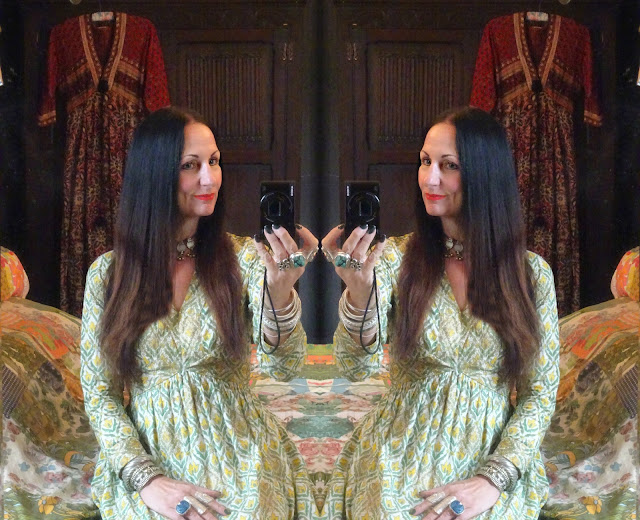 The weather's pretty grim today so Jon's cracking on with the accounts whilst I've managed to conquer both the mending pile and hand-washing mountain. Being so pale this 1960s Indian cotton maxi dress isn't the most practical choice for a rainy Autumn day, just as well I'm not planning on going further than the Kinky Shed. 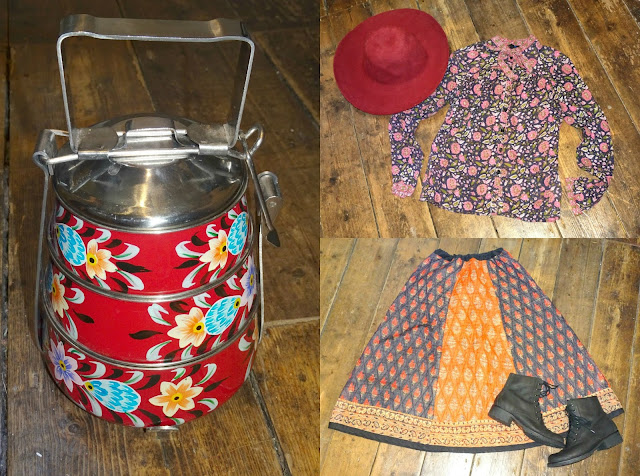 While we've done quite well with the secondhand finds this week I've also do rather well for myself.

Who needs to buy new when there's so much good stuff secondhand?

Have a fab weekend and see you on the other side.
Posted by Vix at Friday, October 25, 2019