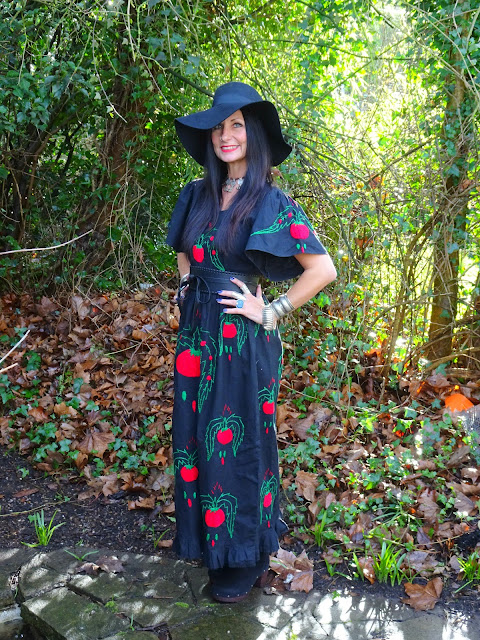 In my last post I mentioned hunting for vintage treasures and while we've found some pretty fab stock for our rails, I've also found some rather good stuff for me. 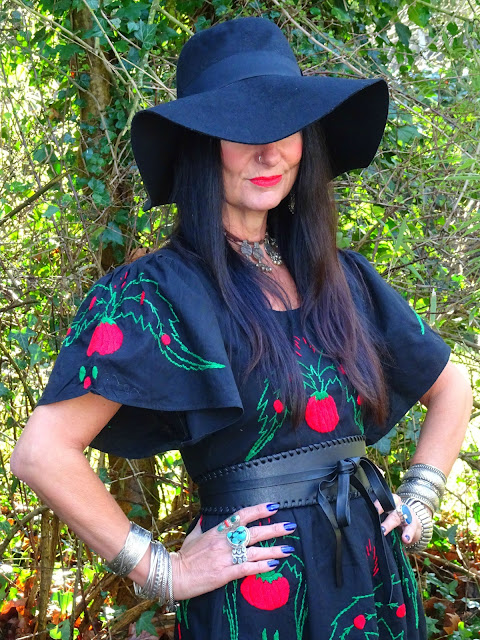 A 1960s Mexican cotton dress adorned with hand embroidered tomatoes? ¡De puta madre!
It's like something Frida Kahlo would have worn, which gets a big thumbs up from me. The only tomato themed item of clothing I've ever seen before was here on Goody's blog the other day. Who knew such madness existed? 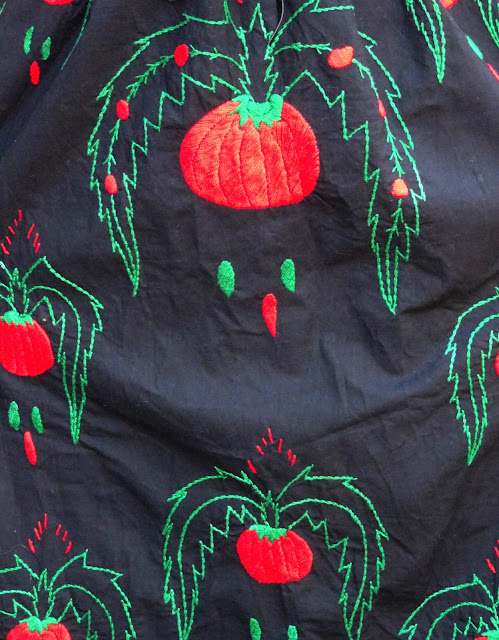 Here's another hand-embroidered maxi dress I probably didn't need but couldn't live without. It's green velvet, circa 1960s and made in India by Suresh. The mustard suede 1960s fringed shoulder bag hasn't been off my shoulder since I found it. I'd been after some Western-style cowboy boots for a while but the ones within my budget were all nasty looking fake suede. I spotted these in a charity shop and loved the iridescent snake effect finish. I'd never heard of the brand, Mjus, but Googled them when I got home and discovered that they're made in Italy from quality leather, hand finished and this style currently retails at £139. £5 well spent. 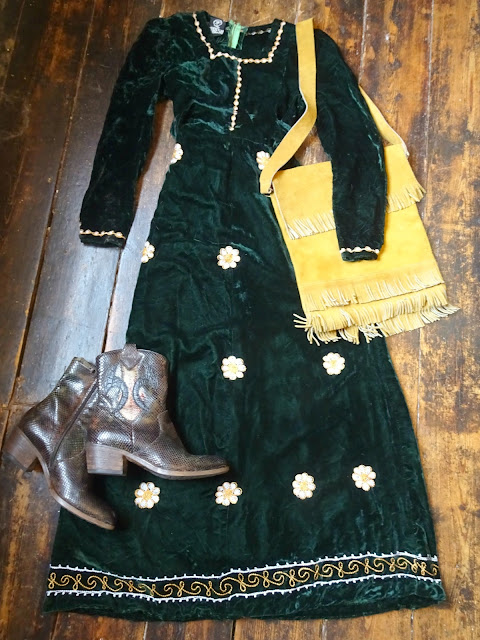 I wore this outfit to the pub on Sunday but storm Freya wasn't conducive to outside photos so here's the top bit of the dress and a couple of new pieces of jewellery I bought in India, the earrings came from FabIndia and the ribbed silver bracelet from a roadside stall in Goa. 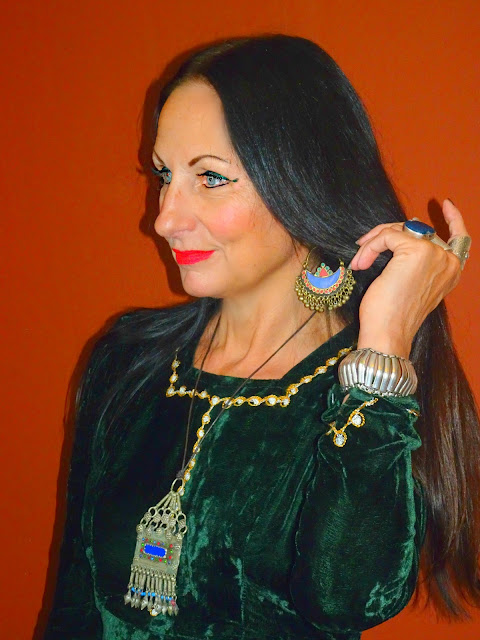 I found a poison green gel eyeliner and brush kit (Kate Moss for Rimmel) in Poundland before I went away. It makes my eyes look really blue and lasts all day without smudging. My friend Betty commented on my lipstick the other day. It was an emergency purchase, I'd gone into Superdrug the day before I flew to Greece to buy my usual Barry M lip paint and discovered it had been discontinued so I grabbed this bright orange matte liquid lip colour by Maybelline instead. It's the best lipstick I've worn in my entire life - no, I'm not being paid to say that - I love it. 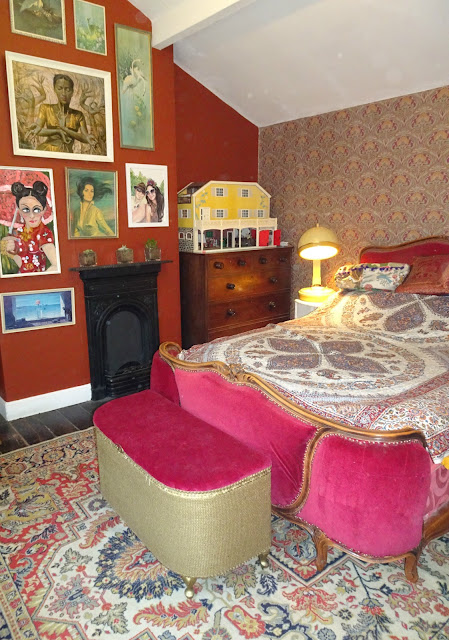 After weeks of searching eBay I've finally managed to find an eight foot by ten foot vintage wool rug within budget. This was listed as a "nice rug" and the auction finished during the day. It arrived on Monday and getting it in situ nearly killed the pair of us. Neither cat has ragged it...yet!

So enough of the shopping. How about a bit of culture?

This is what I've read so far this year.

I was recommended gripping spy thriller I am Pilgrim by a Facebook friend and loved it. While I'm sure most of you are familiar with Wallander, you might not be aware of the author, Henning Mankell's, passion for Africa, I think I love these books even more than I do those of the grumpy Swedish detective. The Man Who Wasn't There is written by the creators of The Bridge so if you're a fan of the BBC4 Scandi Noir series then you'll enjoy this.
I never watched Wire In The Blood and after reading the book the series was based on I bought the boxed set and we've been gripped ever since.
I also enjoyed Chowringhee, set in a hotel in post-war Calcutta and a hit Bengali film in the 1960s and The Illumination Of Ursula Flight, a thoroughly enjoyable romp around Restoration England.
America's First Daughter was a fascinating novel, telling the life story of Thomas Jefferson's eldest daughter, Martha Patsy Jefferson Randolph, drawn from thousands of letters and original sources.

Viewing wise, in between watching Wire In The Blood DVDs, I'm loving Baptiste, the second series of Icelandic crime thriller, Trapped and The Great British Sewing Bee - especially last week's theme, the 1970s. I'm very excited that Deutschland 86, the sequel to the amazing award-winning cold war thriller, Deutschland 83 starts on Friday night. The plot's brilliant and the soundtrack, interior design and fashion is bang on.

On the creative front most of the time I've been mending or replacing buttons and zips on the clothes we've found in the charity shops but in between I'm back into my crochet, making a few granny squares each evening. I've no idea what it's going to be yet. 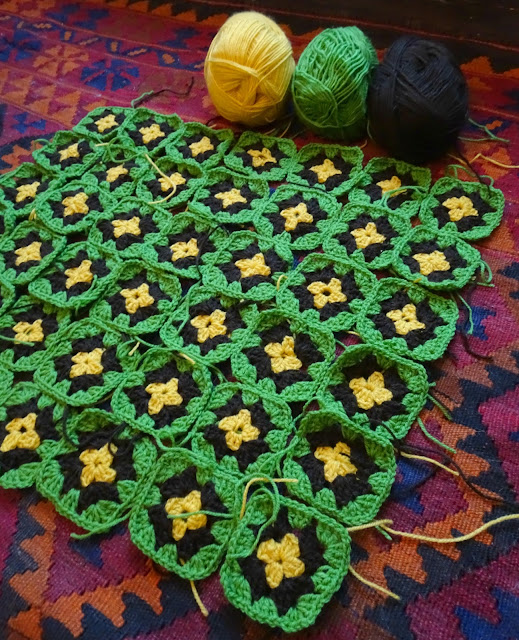 Did I mention applying for festivals? Oh yes! I have news on that front, too. After I failed to secure Glastonbury tickets when they went on general sale last year in desperation I applied to trade there never in my wildest dreams expecting to hear anything from them. Guess what? They've only gone and said yes!  Little old Kinky Melon does the world's biggest (and most famous) festival, I'm excited and scared to death!