Turn Off, Tune In, Drop Out - My Internet Free Week 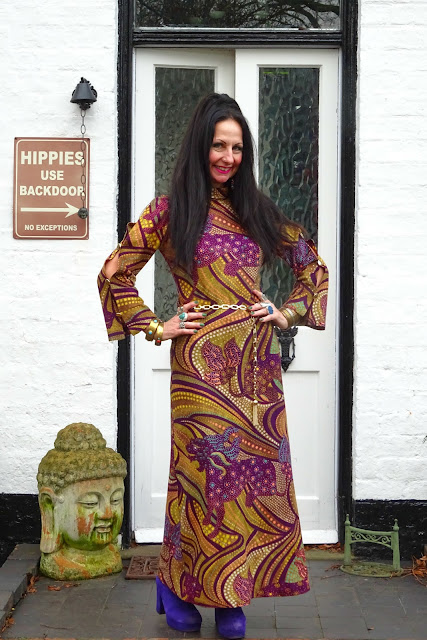 How time flies! After publishing my last blog post on 23rd December I switched off my PC and it stayed off until last night when I needed to amend a booking for our forthcoming trip. I achieved so much in those seven internet-free days! While Jon painted the bedroom and built a new shower cubicle, I re-potted all our houseplants, made lemon verbena bath bombs, cleaned my jewellery, tackled the mending pile, restrung a couple of beaded necklaces, painted a fireplace, sorted out the kitchen cupboards, the freezer & our bookshelves and cracked on with my travel packing. We even came up with an itinerary for our first couple of weeks in India (virtually unheard of!) With the exception of Xmas Day, I was up and exercising by 7am, there's nothing like having an imminent date with a bikini to keep you on the straight and narrow over the festive season. 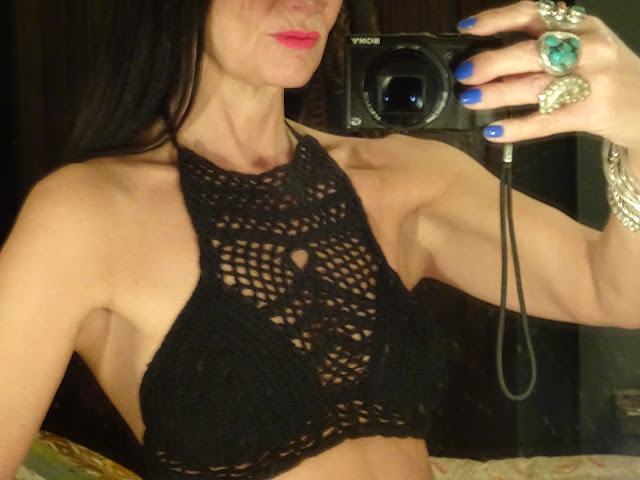 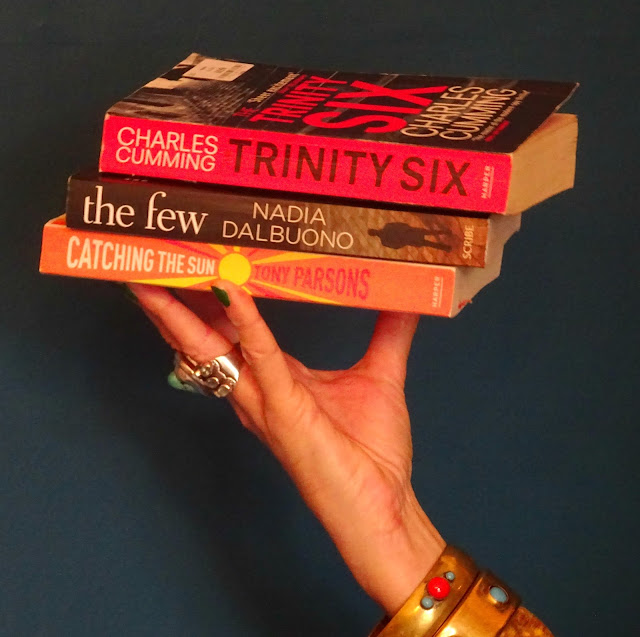 I even found the time to read three books. All three are worth a read but, as an espionage novel obsessive, my favourite was Charles Cumming's Trinity Six, a gripping thriller about a hard-up academic stumbling upon the Cold War's most closely guarded secret, the undiscovered sixth member of the infamous Cambridge Spy ring. I was especially excited to read a description of one of the women central to the plot as having long black hair, blue eyes, a silver ring on each finger and being a wearer of vintage dresses and platform shoes. Hmmm, have I ever met Charles Cumming? 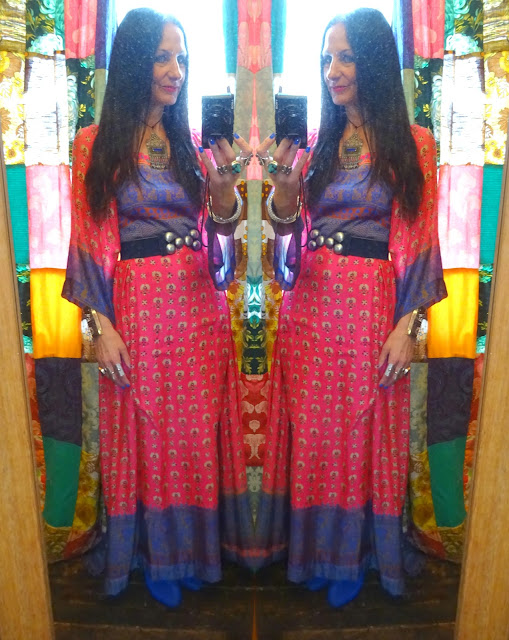 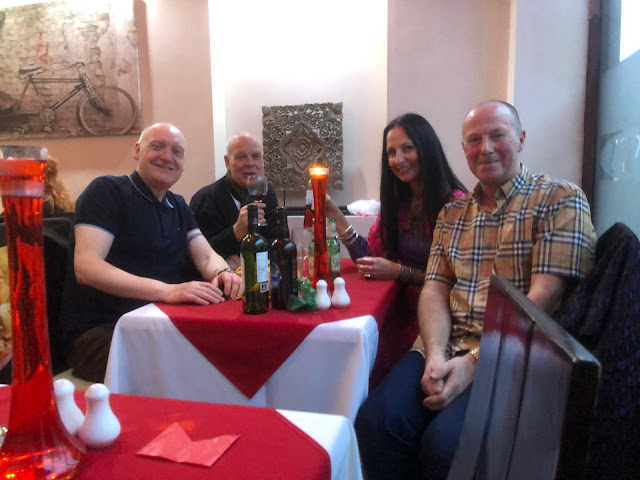 We spent a wonderful few hours in Nessa's, our local Indian restaurant. I feasted on baby aubergine stuffed with a julienne of spiced vegetables and a duo of Romano peppers stuffed with masala cauliflower, the boys had a mixed meat platter starter and curried lamb shank, accompanied by steamed basmati rice and Bombay potatoes.

The food was so delicious and plentiful that neither of us ate another morsel until Boxing Day! 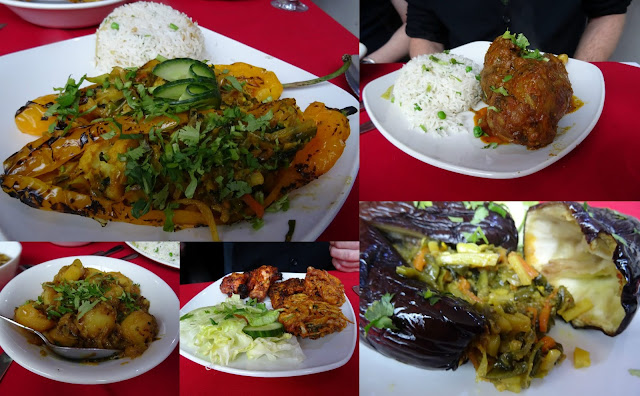 I'd lost my sewing mojo of late but, with no internet to distract me, I cranked up the sewing machine and got stuck in. When I originally made the bedroom curtains I'd lined them with fabric salvaged from another pair of curtains but over the years it had perished and the windows looked terrible when viewed from the outside so I took the curtains down & unpicked the lining. I love how the light shines through them now, they remind me of stained glass windows. 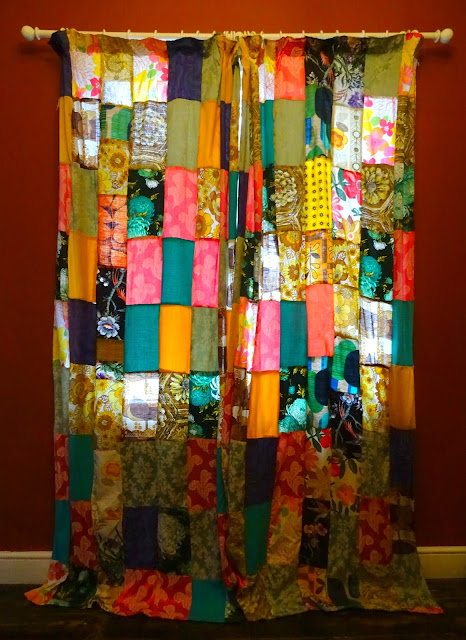 I made myself a new shopping bag from a 1970s curtain Jon had found in a charity shop a fortnight ago. And no, you don't need to tell me that your nan used to have those curtains, I've heard it a million times before.... 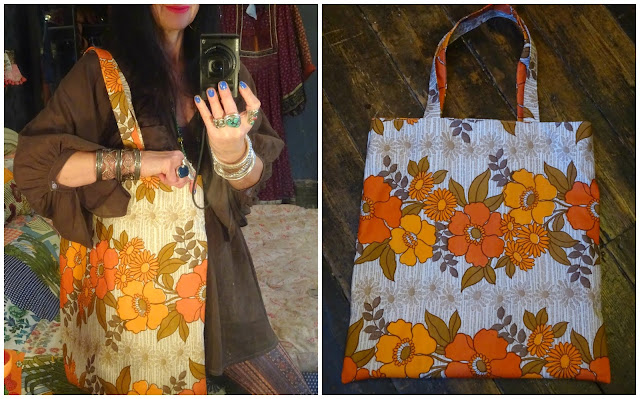 I knocked up this off-the-shoulder top from a vintage cotton sari we'd found in a charity shop back in the summer. I made a couple of these tops a few years ago from a tutorial I'd found online but, in my desire to prove that I could live without the internet, relied on my memory and it didn't let me down. Both the top and my skirt will be travelling with me next week. 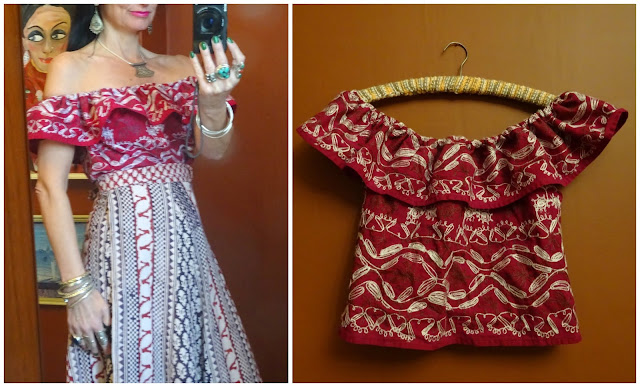 I made another bag using more of the sari - this will double up as both my hold luggage and a beach bag. I've cut the reminder of the fabric into squares for future patchwork projects. 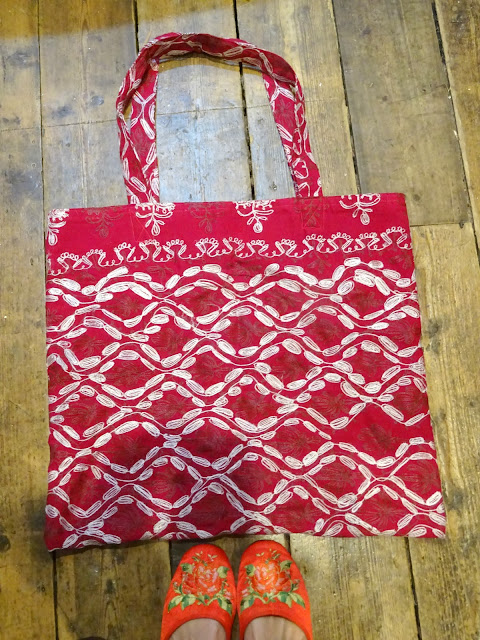 We had to take a trip to B&Q (an out-of-town DIY superstore) on Friday as Jon had run out of paint and made a quick diversion into the charity shops on the way, after all, it had been over a week since we'd last set foot in one. Finds included a fantastic 1970s bubblegum pink belted wool coat, a gents' fake fur trimmed 1960s car coat, two 1970s ladies' velvet blazers and a boxy 1980s Indonesian batik jacket (all sadly too big). I did keep this crushed velvet scarf with a marabou feather trim as it matched the knitted dress I was wearing perfectly! 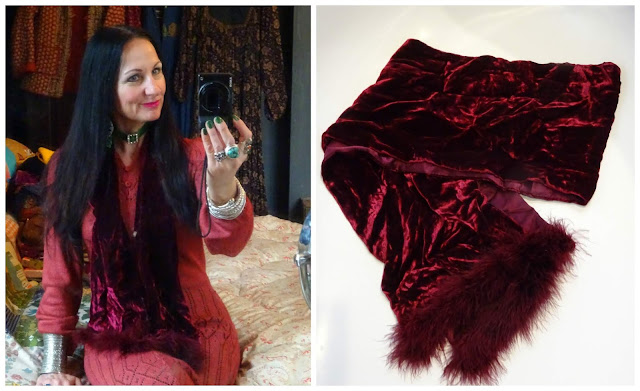 I'll be unplugging again shortly as we're off to a Desi pub for a curry and a few drinks with friends this afternoon. 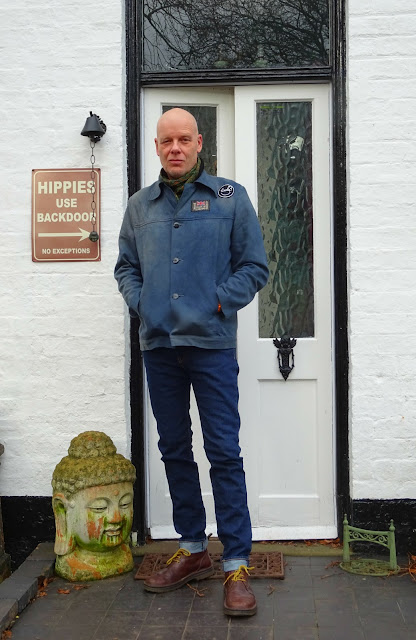 Jon's wearing his Xmas Levi's. He hasn't owned any new jeans for over a decade but we were both impressed when we researched their ethical policy  and decided they were worth the investment (although I did find a 50% discount code before I ordered them, making the purchase a little less painful!) Jon's also wearing a 1960s American prison jacket, one of a dozen bought from Wayne Hemingway at August's Classic Car Boot Sale, which we dyed, changed the buttons and pimped up with vintage patches. They proved so popular that he had to grab one before they all went. The Doc Martens were from a charity shop (£3!) and the block printed scarf was bought direct from the factory in Gujarat last January. 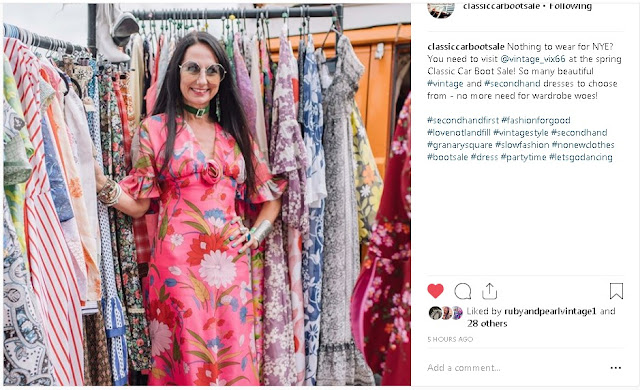 Talking of the Classic Car Boot Sale, look who's advertising the next one in April (details HERE)...little old me!! 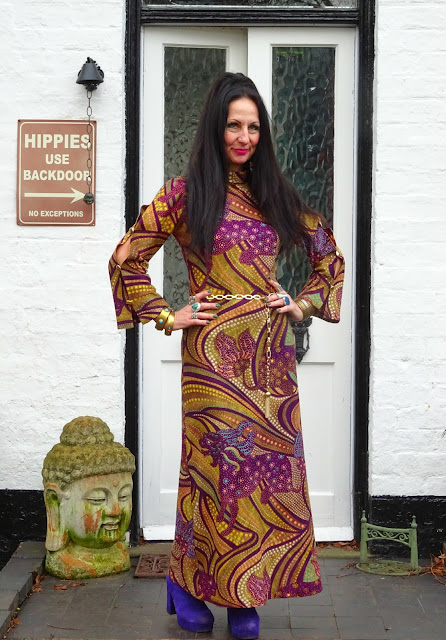 Today I'm wearing my Shubette of London mythical beast print maxi (bought from another trader at Walthamstow's Pop-Up Vintage Fair in October), a 1960s gilt chain belt from a jumble sale and my 1970s purple suede platforms from a charity shop.

Linking to Patti and the gang for Visible Monday.

Wishing you a Happy New Year and see you in 2019 when - hopefully- I'll have finished my India packing and we might even have the bedroom completed.
Posted by Vix at Sunday, December 30, 2018