Down In The Bus Station On Monday - A Blogger Day Out 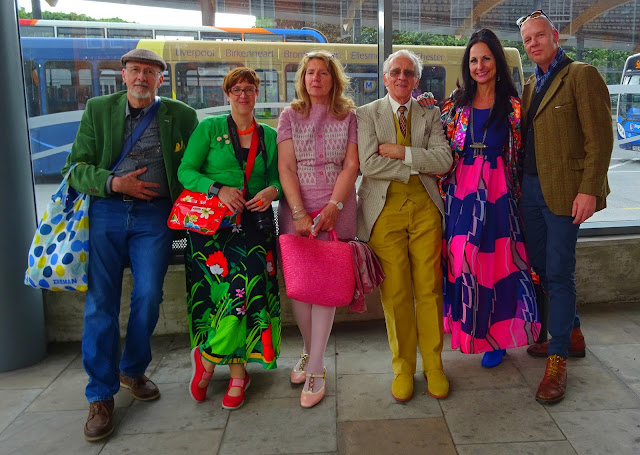 Yesterday Jon and I made the two hour journey to Chester to get together with long-time friends, Lynn and Philip and to meet Ann and her husband, Jos, currently holidaying in the UK from their native Belgium. Our Sat Nav packed up just before we reached our designated meeting point but, just as we we pulled into a lay-by to get the map out, Lynn and Philip appeared behind us so we formed a convoy to the park and ride where Ann and Jos were already waiting. After much squealing, hugging and exchanging of gifts we hopped on the bus and headed to the city centre. 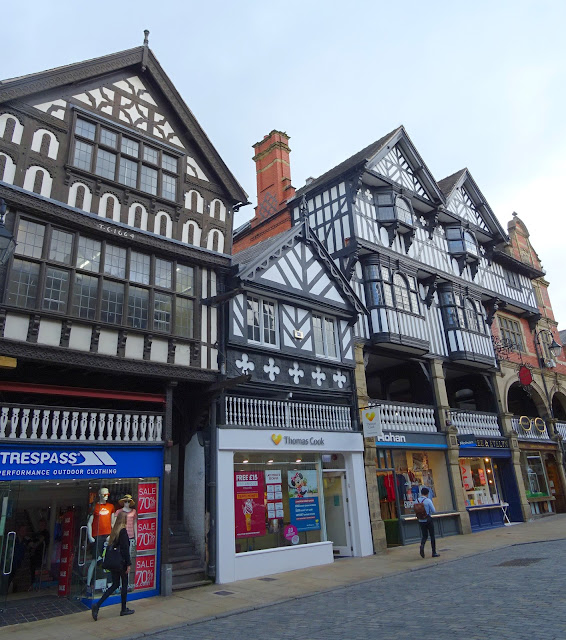 Although Chester was home to my maternal Grandma and the many generations before her, other than a sixth form trip with my Classical Studies group and trading at a couple of vintage fairs, I'd never been. The bits we saw were gorgeous, ancient black and white timbered buildings, elegant covered shopping arcades and cobbled streets where Roman legionnaires once marched to war. 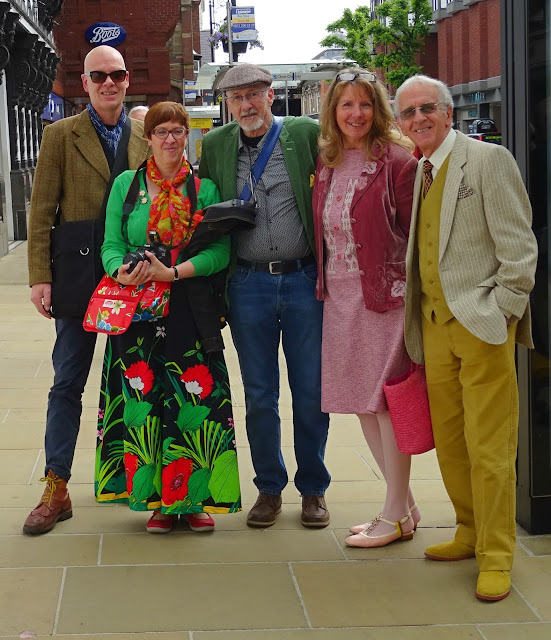 We took a few photos but chatting and exploring Chester's many charity shops took up most of our time. 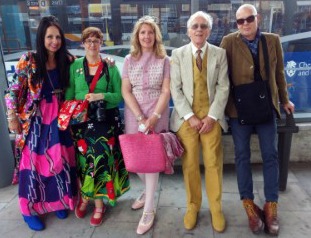 I was excited to discover that Ann and I were the same height. With the exception of Tania and Krista, every blogger I've met has towered over me (even with my high heels and big hair!) 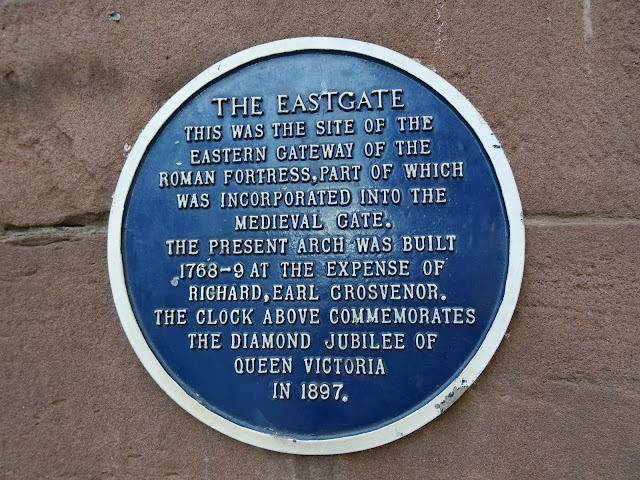 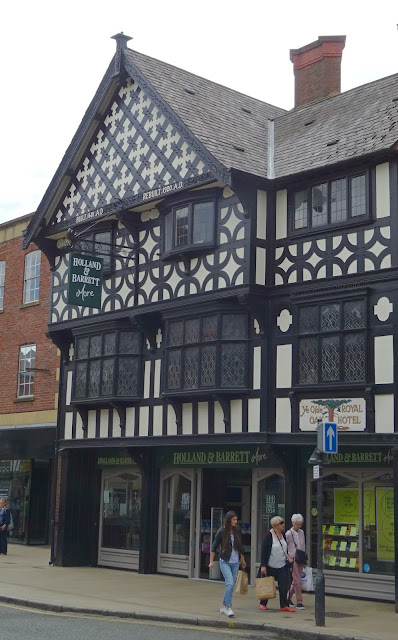 Other than taking photos and occasionally featuring on our blogs, the menfolk don't tend to participate in meet-ups. Like us girls, these three also got on like a house on fire. 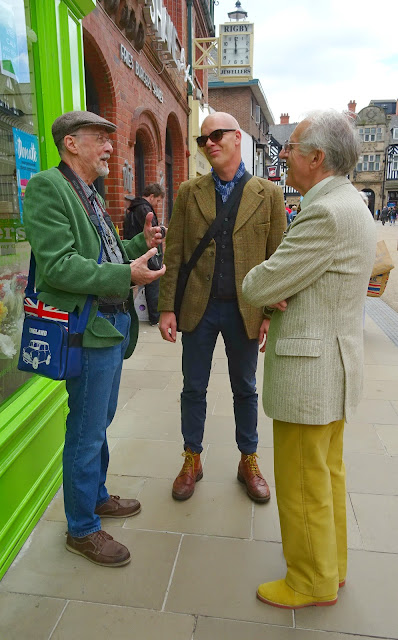 We could have done with one of those Union Jack brollies - it's hard work keeping the six of us together in an orderly fashion. 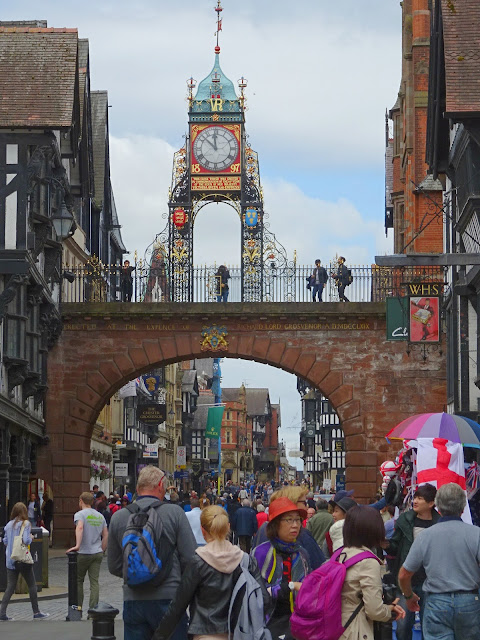 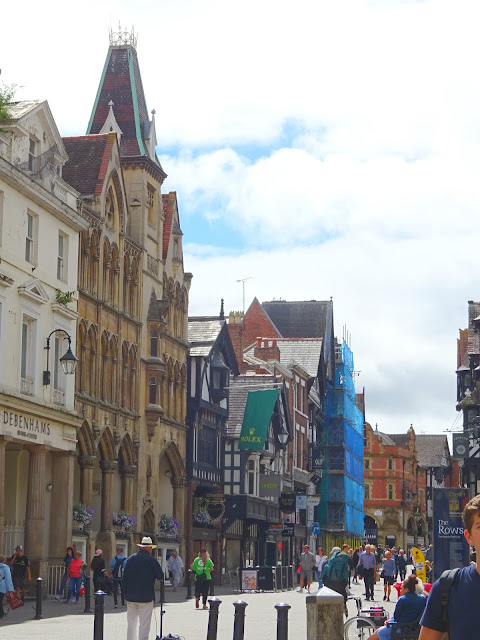 This street entertainer was belting out George Michael covers. Lynn and Philip had a bit of a dance when Careless Whisper started up. 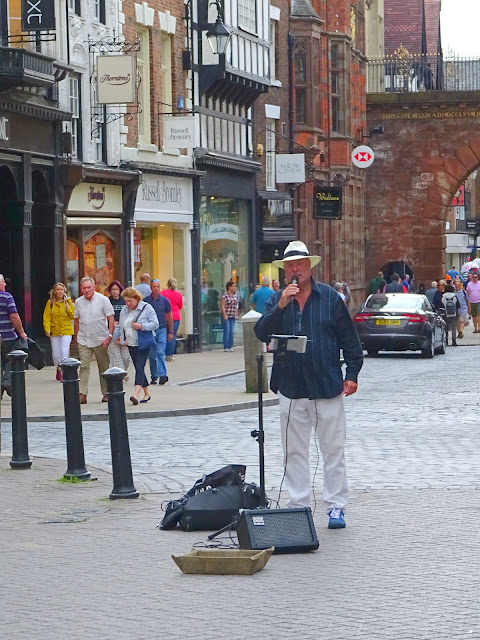 Although the charity shops were plentiful, vintage was thin on the ground and the bits we found were either tatty, overpriced or of the Princess Di 1980s variety which, as I'm sure you can probably tell, ain't our bag! 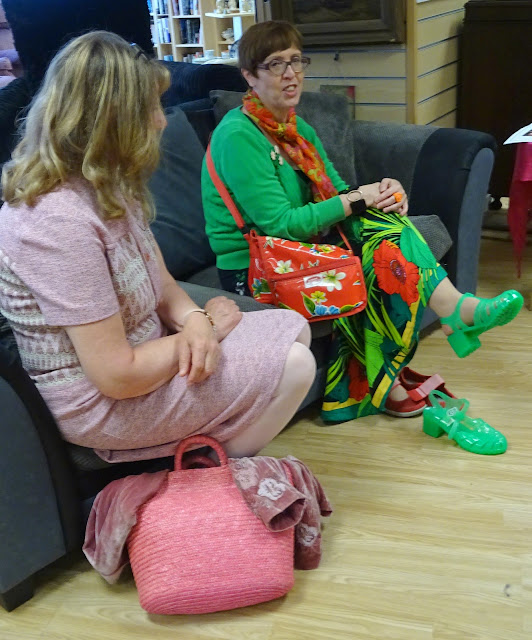 Lucky Ann with her dainty size 37 feet snagged these super cute Italian made jellies in her favourite colour. Lynn and I with our less than dainty hooves were green with envy! 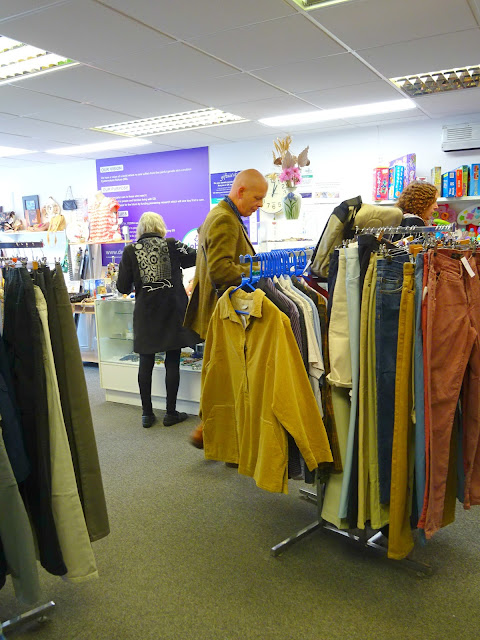 How much! Muttered Jon under his breath. We're not used to city prices. 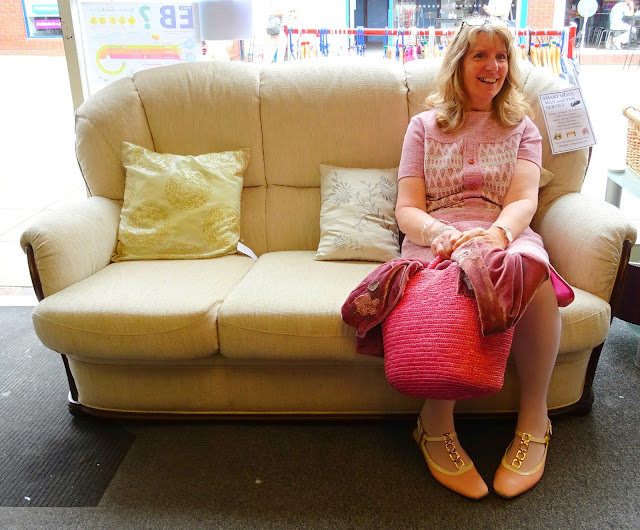 We had a giggle imaging Lynn buying this settee and driving back to Lancashire with it and Philip strapped to the roof of her lime green Beetle, Frida. 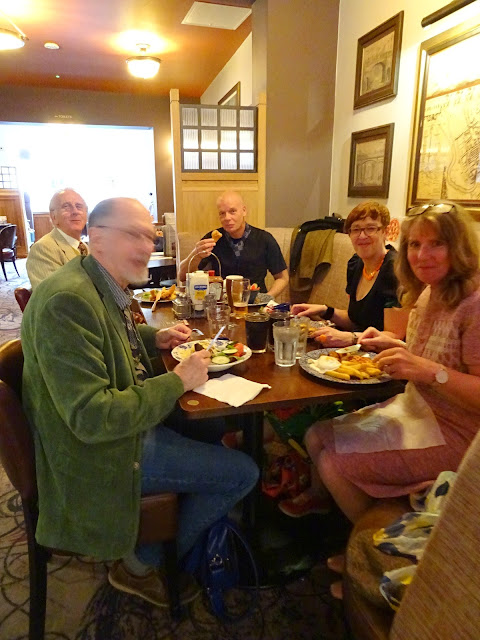 We gave our Belgian guests a taste of traditional British life - a slap up lunch in Wetherspoons. There are two branches of 'Spoons in Chester, we visited The Bull & Stirrup Hotel, a four storey red brick Victorian building on the banks of the River Dee. 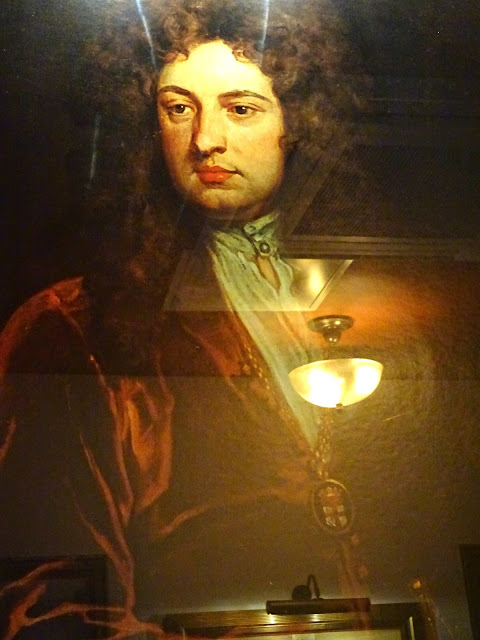 What are the chances? The portrait opposite our seats was of a Belgian nobleman. There were also pictures of local lad, Daniel Craig and the brilliant Ricky Tomlinson who, after attending a trade union meeting here in the early 1970s, ended up being imprisoned. 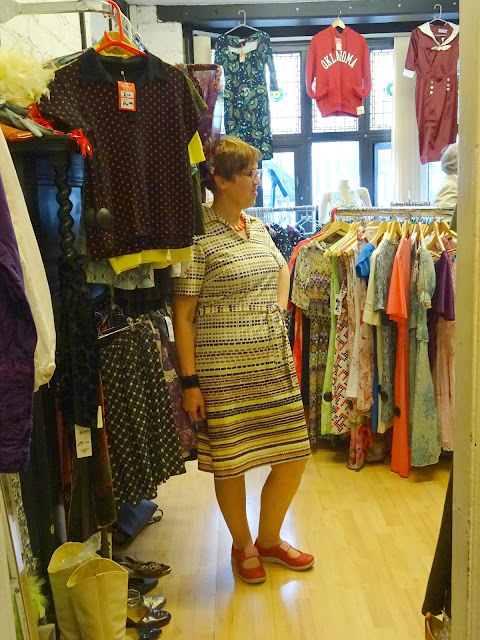 After a long lunch we headed off in search of Chester's vintage shops, getting hopelessly lost along the way. I'd share a photo I took of the gang trying to figure out Ann's street map but Lynn says she'll kill me if I do. The first shop was of the 1990s/refashioned variety and apart from a couple of pleasant enough 1970s blouses wasn't our thing. At first glance the second shop didn't look much better - racks and racks of repro 1950s dresses & brand new Emo tee shirts but we saw a sign for "handpicked vintage" pointing upstairs and found a rail of proper vintage midi dresses all priced at a very reasonable £9.99 (much cheaper than the bland high street frocks in most of the city centre chazzas). Ann found a groovy 1970s polyester number which suited her to a tee. 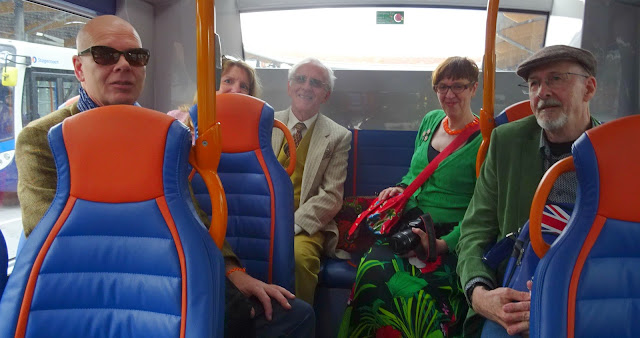 With the clock creeping towards half past four we took the bus back to the car park and said our goodbyes (but not for long - Ann & Jos are staying in Shropshire, the neighbouring county to us, so plans have been made for next week). What a fab day, good weather, beautiful surroundings and brilliant company. 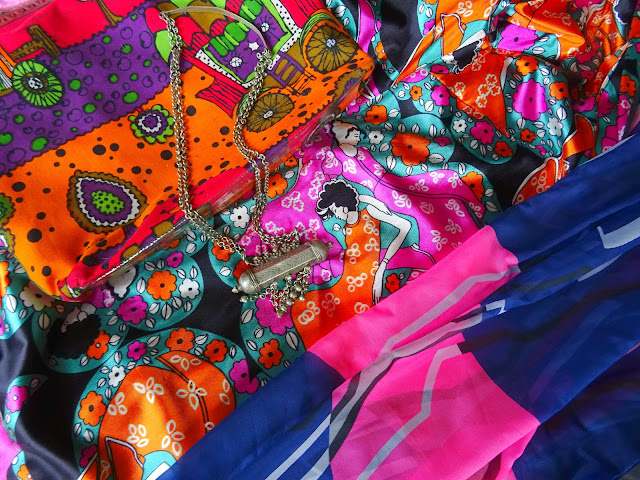 This is what I wore - the 1970s satin duster coat I bought last week, an antique Gujarati necklace, a psychedelic bag from Stockport's Vintage Village and a 1960s silk chiffon dress by Jean Allen (also from Stockport). 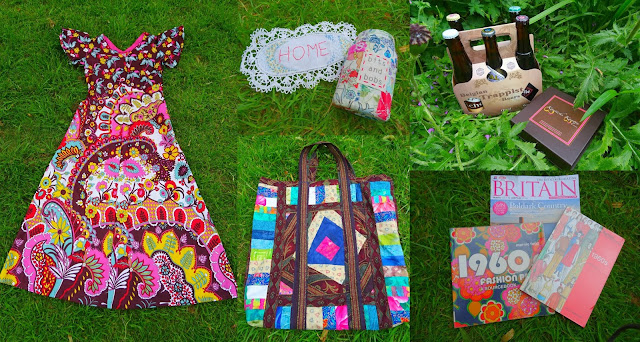 Gifts galore! Belgian Trappist beer & posh Kontichs Kontje chocolates (which I've had to confiscate from Jon as he'll demolish the lot in one sitting) and a groovy maxi from Ann & Jos and from Lynn & Philip some 1960s style books, a patchwork bag and a handmade Bits & Bobs jar and slow stitched doily (made by Lynn). 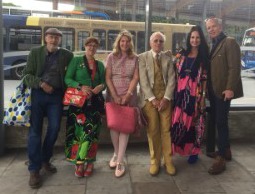 We made it home at 6.59 pm - a minute before kick off! After such a fantastic day out and the trauma of last night's match, the pair of us feel absolutely ruined today!