I Can't Stand The Rain 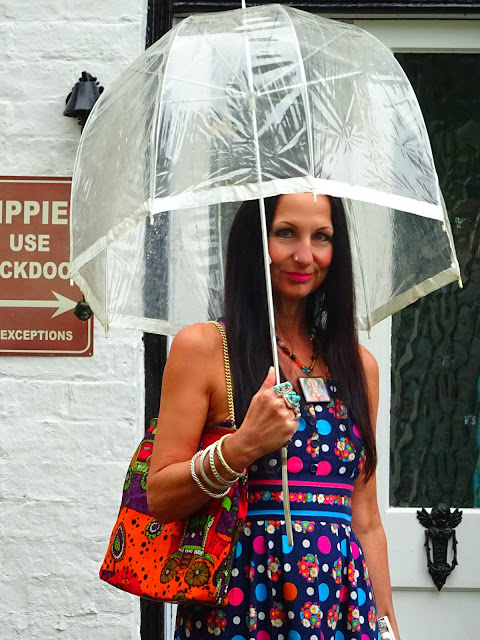 Waking up to torrential rain and grey skies this morning after the glorious sunshine of the last two weeks sure put a damper on our mood. Our first Oriental poppy of the Summer finally burst forth only to be battered into submission hours later, the cats dashed outside to explore what had happened in the garden overnight and immediately sought shelter under the van, balefully looking at us as if the inclement weather was of our making and the silk jumpsuit and fabric boots I'd intended to wear for my stroll into town were put aside in favour of something less flimsy and more watertight.


Out came one of my beloved Van Allen corded cotton maxis (I've also got one in green). I bought them from eBay over a decade ago. The seller had enclosed a note in the parcel, telling me how, in the late Sixties when she'd been a sixth former she got a Saturday job in Van Allen and had bought the dresses using her staff discount. She'd worn one of her dresses to see Jimi Hendrix perform at the Isle of Wight Festival in 1970. Every Summer I get them down from the suitcase on top of the wardrobe and fall in love with them all over again. The early '70s birdcage umbrella was my Mum's. I've got quite a collection of vintage brollies and for some reason I've never used this one - until today. What was I thinking? It's the best umbrella ever, it covers my shoulders, I can see out of it and it can withstand wind, unlike modern umbrellas than turn inside out if you sneeze at them. 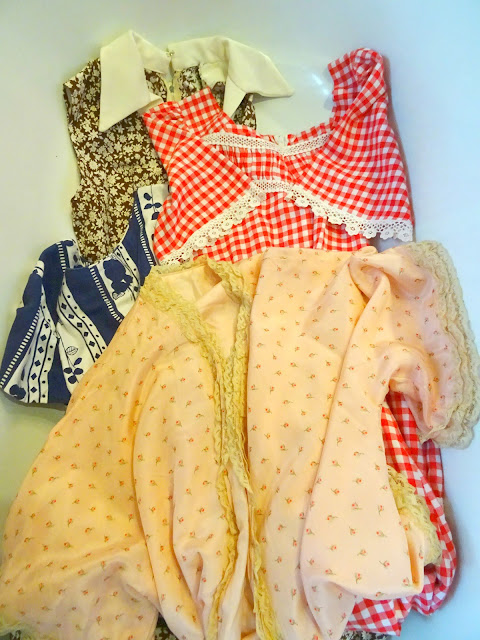 Walsall is getting more and more depressing, we made the national news last night because of the huge problems we have with fly tipping and the number of boarded up shops in the town centre is horrendous - made even worse by yesterday's news that Marks and Spencer, which has stood in our high street for 84 years, is set to close down. I got what I needed to from Wilko and Beauty Queen Cosmetics (their Ardell eyelashes are half the price of Superdrug, there's a Bollywood soundtrack and the extremely helpful all-male staff are super friendly and, unlike every other shop I go in, always smile and ask how I am rather than bark "wanna carrier bag?" at me without even making eye contact). The remaining four chazzas, which unless you're a fan of Primark & George at Asda, are usually pretty grim but today I managed to snaffle a few vintage gems - a 1970s French-made gingham and lace-trimmed midi dress, a ditsy print cotton maxi, an early 1960s cotton shift labelled "Wynne - A quality product of the British Empire" and a 1930s silk bed jacket from Woollands Ltd of Knightsbridge, a lingerie company founded in 1869 which served the aristocracy, including Edward VII's mistress, Alice Keppel.

Talking of labels thanks to my friend Sarah, I'm now the proud owner of a rather slinky vintage silk dress by Travilla, the designer behind Marilyn Monroe's iconic white dress in the Seven Year Itch. Despite us never having met she has a knack of finding clothes that fit me perfectly, this dress being no exception.


Look at that sunshine. It's hard to believe this photo was only taken a couple of days ago although the BBC reckon we're getting Summer back tomorrow. Hooray!

Away from the misery of a wet Friday in the Black Country lets see what's going on in Gothenburg, shall we? 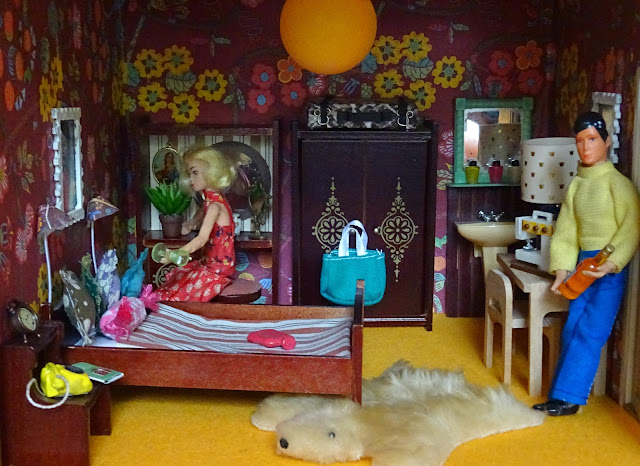 Here's Liv and Axel. As it's a bank holiday on Monday they're making the most of their weekend and they're off out on the town tonight. Liv's beauty routine - like mine - includes a glass of wine while she's getting ready and Axel, ever the obliging partner is happy to keep her topped up. 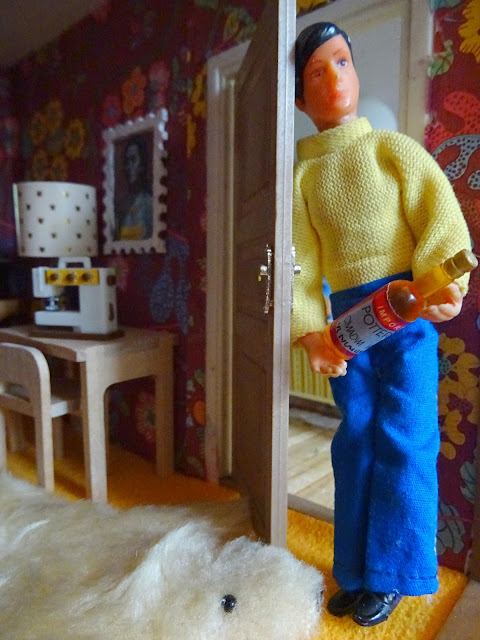 Excited that the World Cup is less than a month away Axel's resplendent in the colours of his national side. Being the proud Swede all of the furniture in this room (including the bearskin rug, '70s sewing machine and lamp) is vintage Lundby. 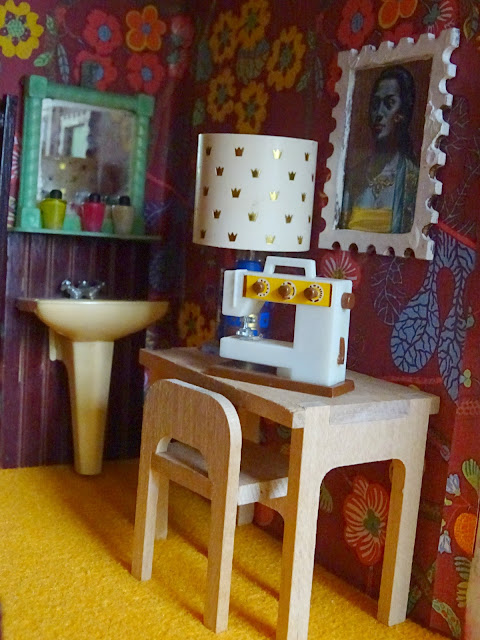 If like Liv and I you dress almost exclusively in vintage clothes it's a good idea to keep a sewing machine close at hand as you never know when you might need to make an emergency repair. 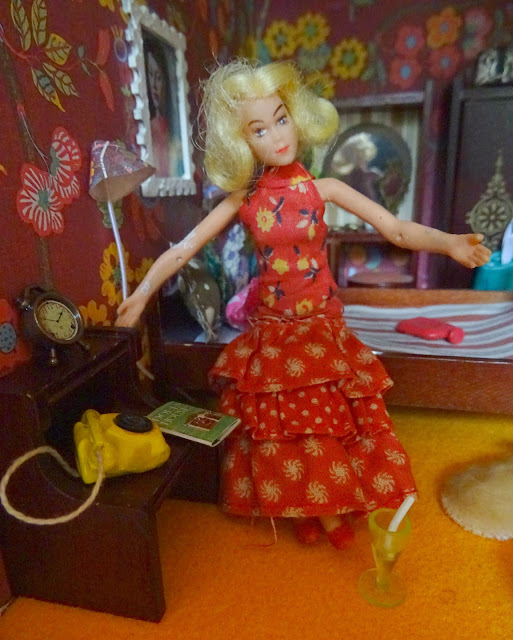 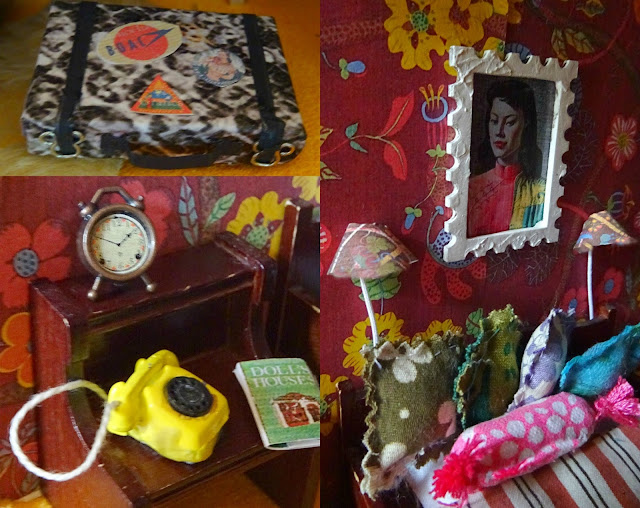 Liv & Axel's bedroom is papered in one of Josef Frank's classic prints, Catleya, created in 1930 and based on an orchid grown in the rain forests of South America. The cushions were handmade from vintage fabric scraps, the reading lamp flexes are knicker elastic and the suitcase is made from a matchbox. As you can tell from her bedside reading, like all the best people, Liv is obsessed with doll's houses.

The religious picture is taken from a devotional pendant - also from Sarah. The centre light is a ping pong ball, Linda's brilliant idea. 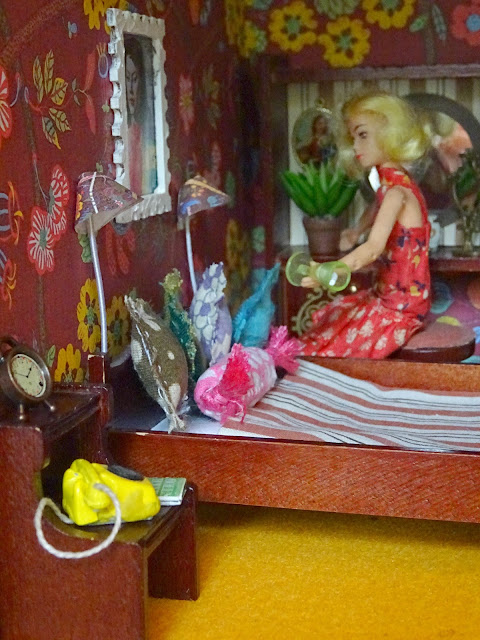